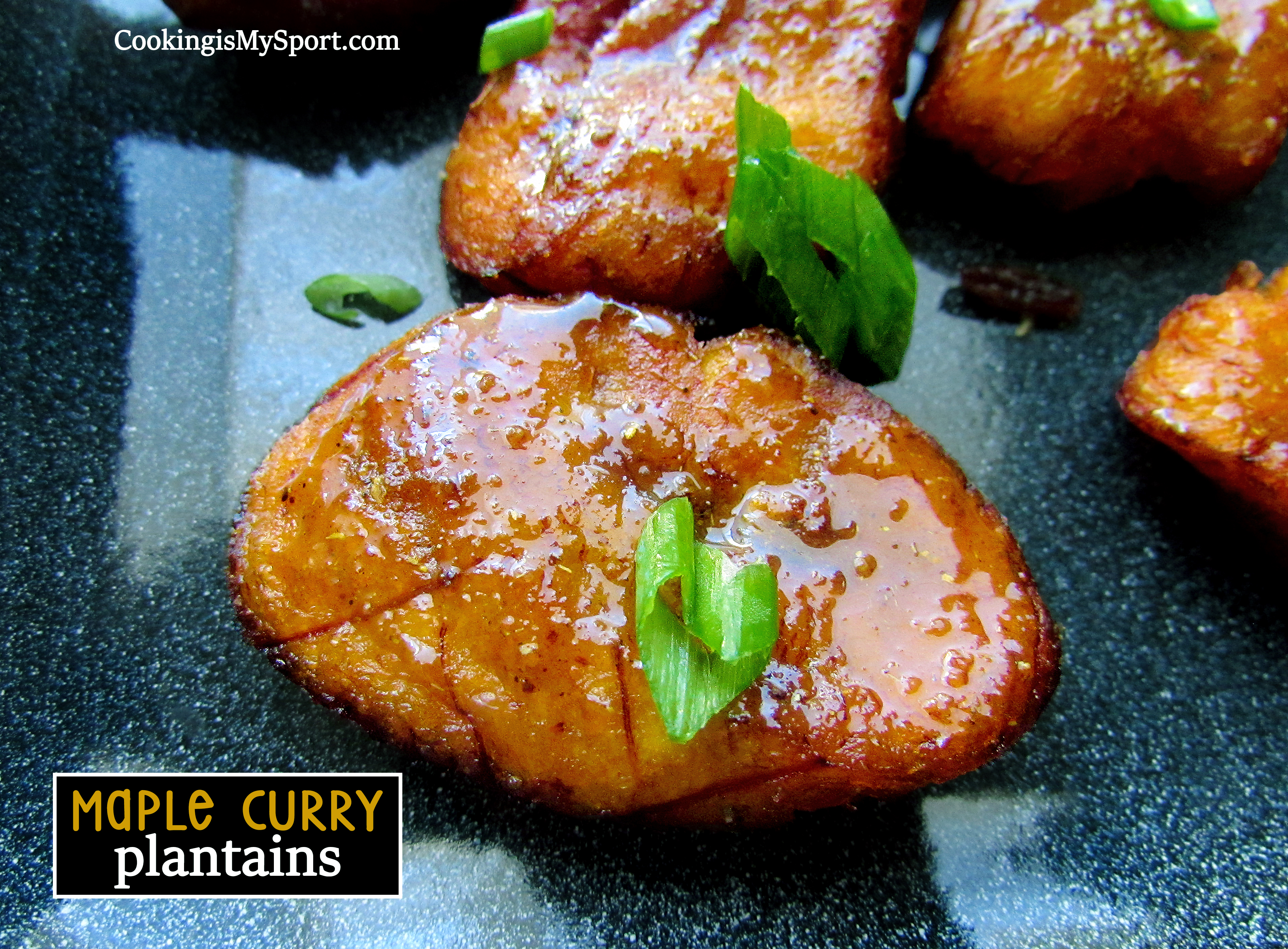 ‘Sup guys. If you celebrated any kind of festivities yesterday, then I hope that it was filled with good food and good times with your family and loved ones. It’s a little weird to still have it be relatively warm and snow-less here on the west side for this time of year, but it was still a pretty good day. I’m in a pretty decent mood from the stuff that came out of my own kitchen. I’m in an even better one when I think of all the leftovers that we’re gonna have for the next few days from it. 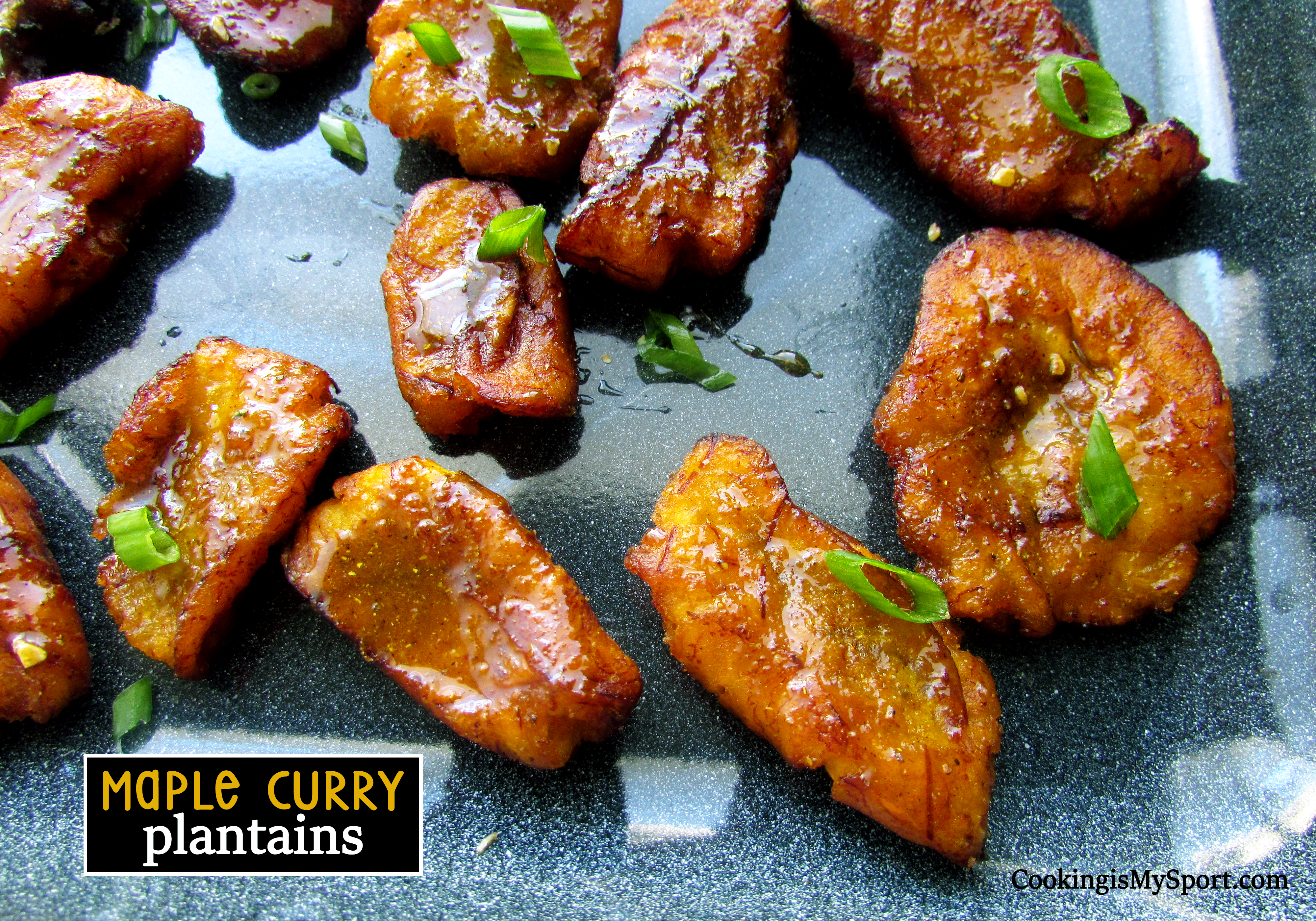 So, moving on to the item of the day: plantains.

I’ve known what they were for a good long while, but back in the Mitten, we didn’t have very many of them in our grocery stores. Even when we did, it was only at certain times of year and they didn’t come very inexpensive by the pound.

On this side of the tracks, not only have I yet to go to a grocery store and NOT seen plantains, they’re generally pretty inexpensive here. I think it’s probably because I live in an area with a very high Latino/Hispanic population and plantains are pretty common in Latin cuisine. 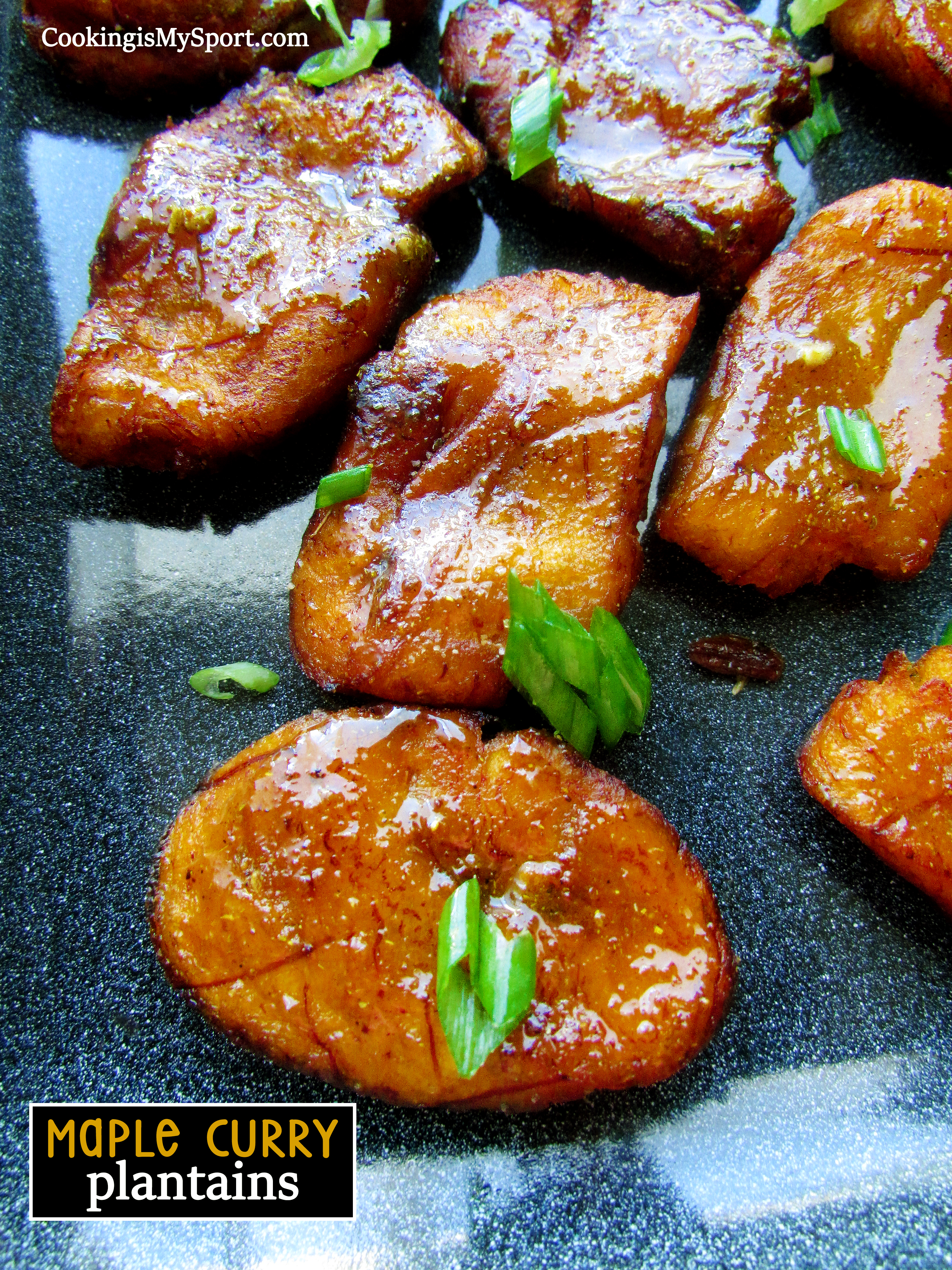 Like Latin, Caribbean cuisine (and Latin Caribbean as well when I think about it) is one that I don’t have nearly enough experience cooking, or eating for that matter. I do know that plantains are used a lot in them all. Plantains are similar to bananas, they’re just slightly larger, less sweet and more firm/starchy. Up until now, they kinda baffled me. I wasn’t sure of how they were supposed to be cooked or taste: were they supposed to be cooked to be sweet like bananas, or in a more savory application like squash?

Since I  wasn’t sure, I just decided to leave them alone for a while. But as it tends to happen with ingredients/recipes I avoid out of intimidation, it popped back up on my radar. 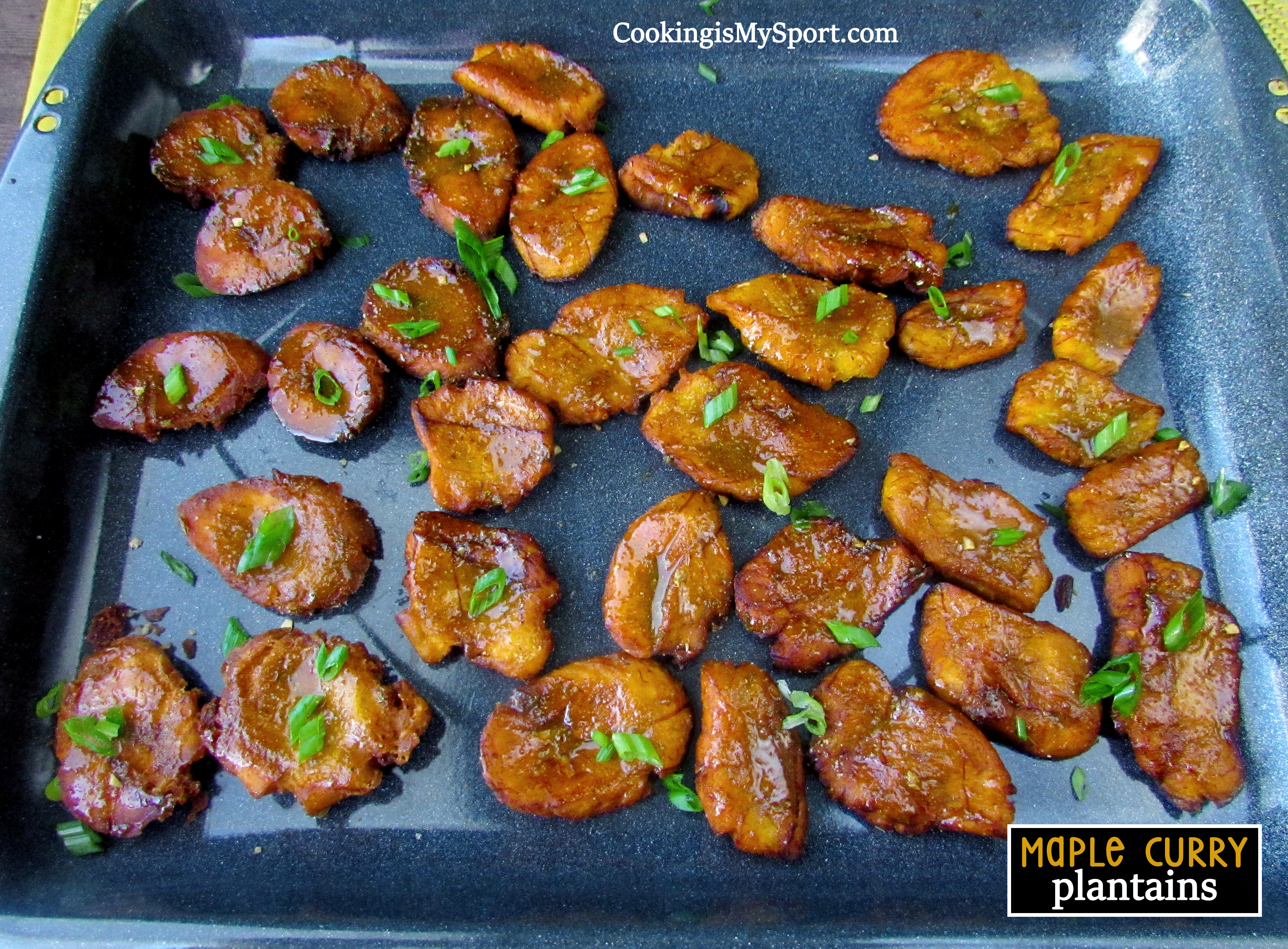 Before I even came out, my sister told me about a Caribbean restaurant in the area that when I got here I just HAD to try. She raved about their jerk chicken, greens and in particular, their preparation of plantains. When my birthday came around in September, she bought me dinner at the joint and I finally got to see what all the fuss was about with plantains.

Yeah, I get it now. They’re delicious.

You are reminded of bananas when you eat them, just a much more starchy and less mushy/sweet one. I could tell that the plantains at the restaurant she took me too were probably fried in butter, but not seasoned with any particular spices so as to let their own flavor stand out. They were also tender on the inside and browned on the outside. After that dinner I was set upon figuring out how to make them myself.

Didn’t take me too long. 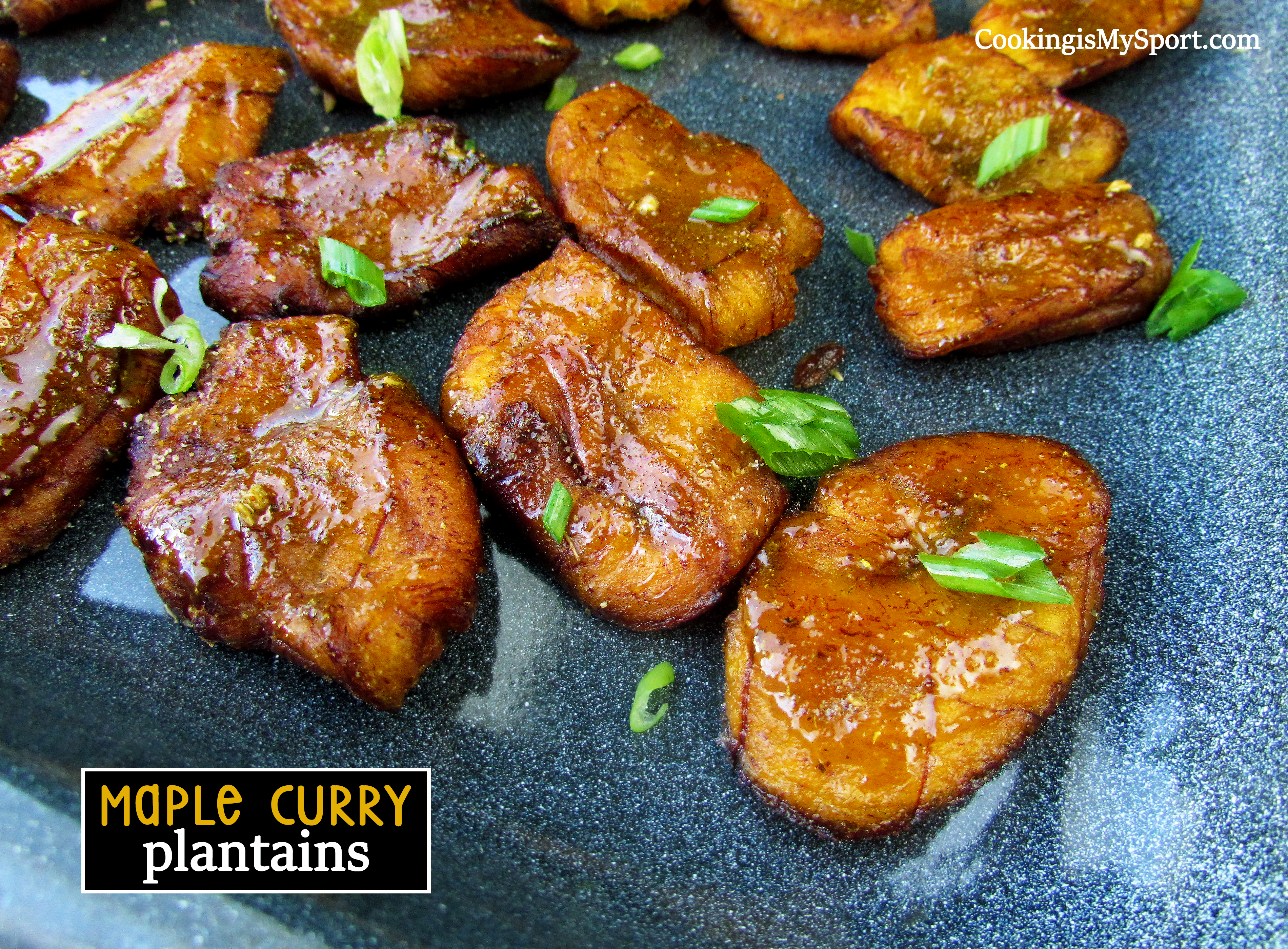 Because I was going in knowing nothing about cooking plantains, I decided to gather inspiration from far greater minds than mine who I knew would know what was what when handling them. One of my Marcus Samelsson cookbooks featured a recipe with plantains where they are actually fried twice in oil. After the first fry, they get pressed down flat with a wooden spoon then dunked into a garlic water bath; this, I assume is to draw out excess starch that would prevent them from getting a good crust in the second fry.

And it IS in that second fry where the real magic happens. Here’s the best part you guys: I actually had two ripe plantains and one plantain that even after sitting on the counter in a paper bag for 2 days with the other ones, was still green on the outside and not-too-ripe. They ALL came out fantastic. Granted, the ripe plantains had more ‘meat’ to their insides, but the green plantain actually developed a golden brown crusty layer on the outside that contrasted with the starchy inside perfectly.

The plantains could stand on their own just like that, but when you add the quick maple syrup-curry powder glaze to them…OMGAWD. We agreed immediately that these would be going into the rotation, stat. I think you and yours will agree if you try this recipe, which I’ll be linking up to this week’s Fiesta Friday #147, co-hosted this week by  Julianna @ Foodie On Board and Hilda @ Along The Grapevine.

Heat about 1 inch of the peanut oil in a skillet to 325 degrees Fahrenheit. Line a baking sheet with parchment paper.

Combine the water, garlic cloves and salt together in a medium bowl.

In a separate smaller bowl mix together the curry powder and maple syrup and set aside.

Take the plantains and fry them in batches in the peanut oil until golden brown, about 1 to 1 1/2 minutes per side. Using a spider or a metal spatula transfer the plantains to the baking sheet. Wait 1 to 2 minutes for them to cool, then stand the plantains up on edge; using the flat end of the spatula or a wooden spoon, smash the plantains to half their diameter.

Place the smashed plantains into the garlic water and let them soak for 1 minute.  Remove and gently blot dry with paper towels.

Make sure the oil has returned to 325 degrees Fahrenheit. Fry the plantains again until golden brown and crisp, 2 to 4 minutes per side depending on how crisp you prefer them to be. Remove and drain on paper towels.

Take the maple syrup-curry mixture and either drizzle or dab it onto the plantains with a pastry brush. Serve immediately.