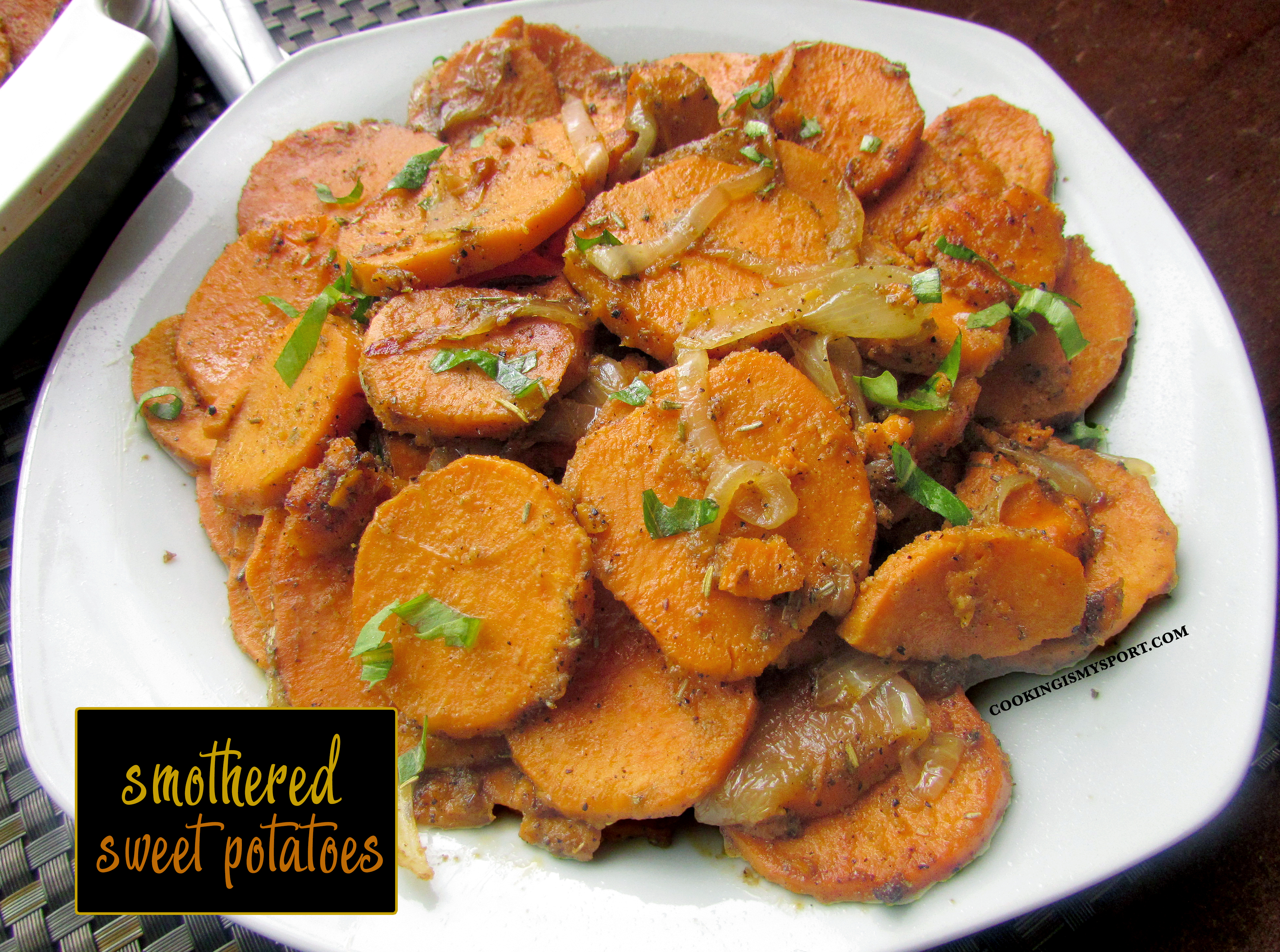 I grew up in a very religious household and every year as apart of our faith the church we attended encouraged the members to do some form of fasting for the months of January and the first two weeks of February. It was meant to be an exercise in drawing the believer closer to God and encourage gratitude by practicing the self-denial and discipline that comes with fasting. In theory, anyway. 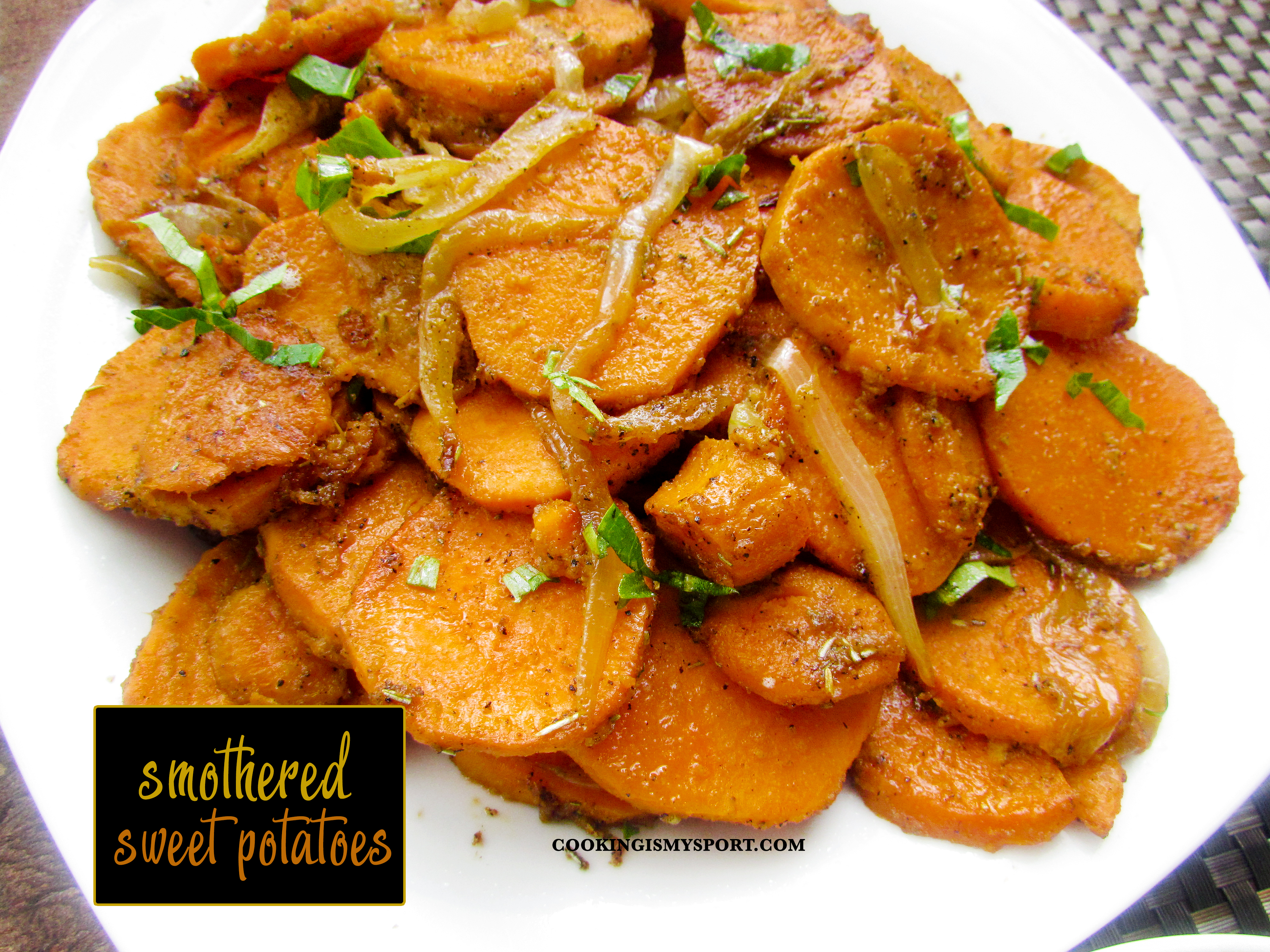 It was kind of like an early form of Lent. Some people would actually fast from food completely for the entire 40 days. Others would fast from things like television. But most people would just opt for a Daniel Fast. 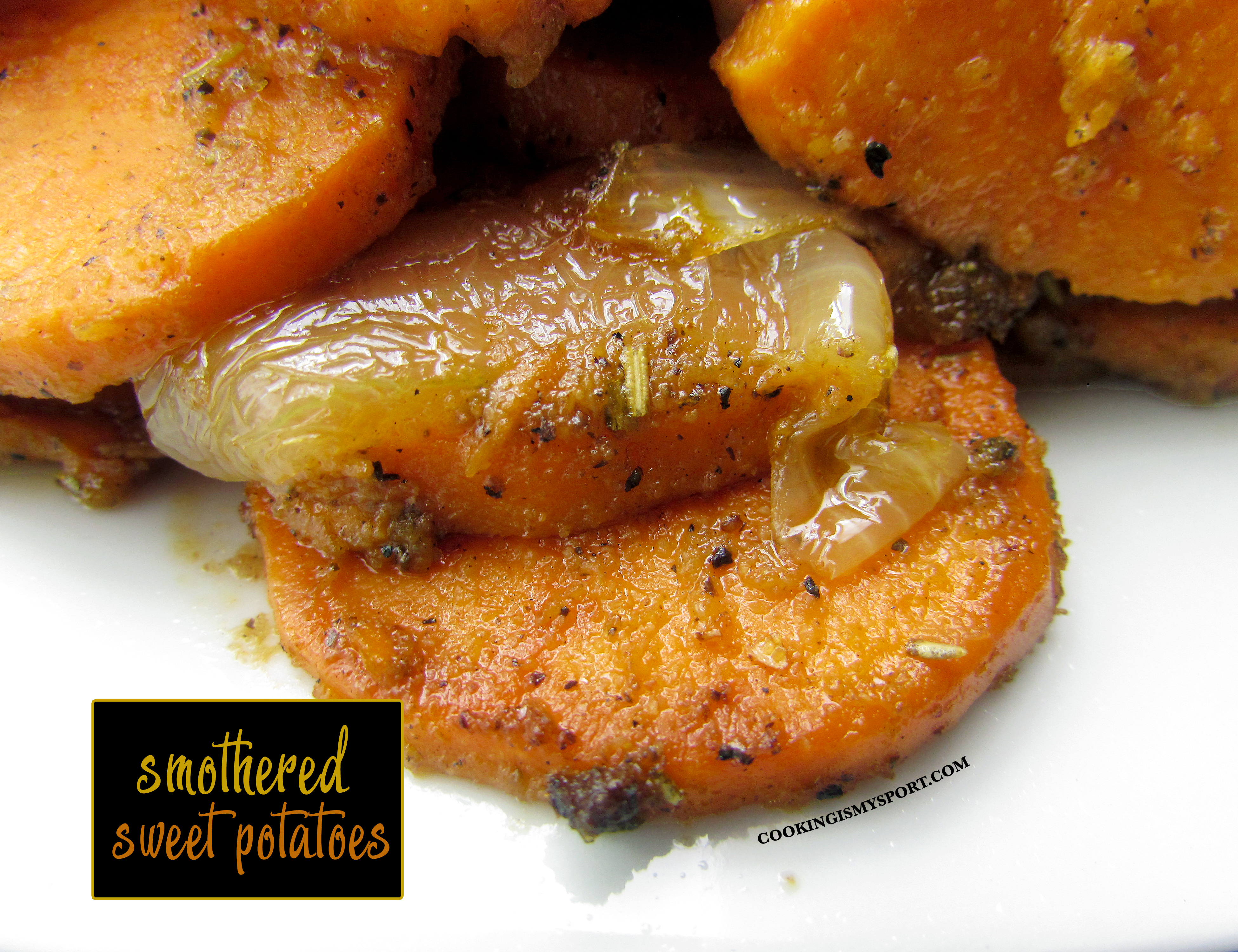 It’s a reference to the prophet Daniel from the Bible who at one point consumed nothing but vegetables for 10 days.In a nutshell, it’s a diet where the participant doesn’t eat meat, alcohol, processed sugar and in some cases, most grains. It’s the fast that we most often participated in. Is it a blast? Not particularly. But there are ways of cooking so that you don’t have to be munching on crudites for 40 days. 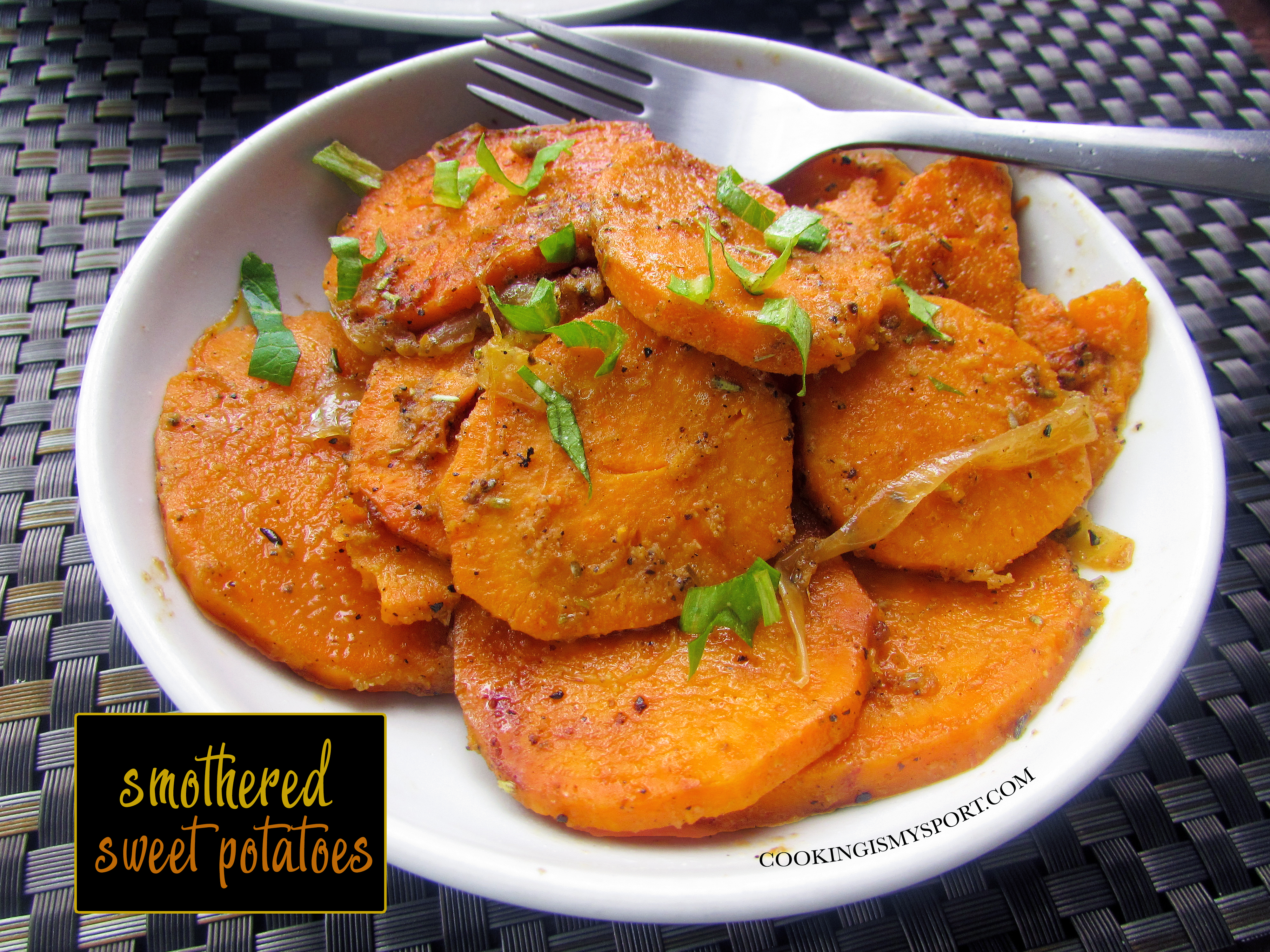 My mom would cook a lot of potatoes in a lot of different ways for us. Our favorite way was to fry them up smothered style in a skillet. I shared one recipe a long time ago when I first started the blog. Today I decided to give out another one that’s made with one minor ingredient swap. 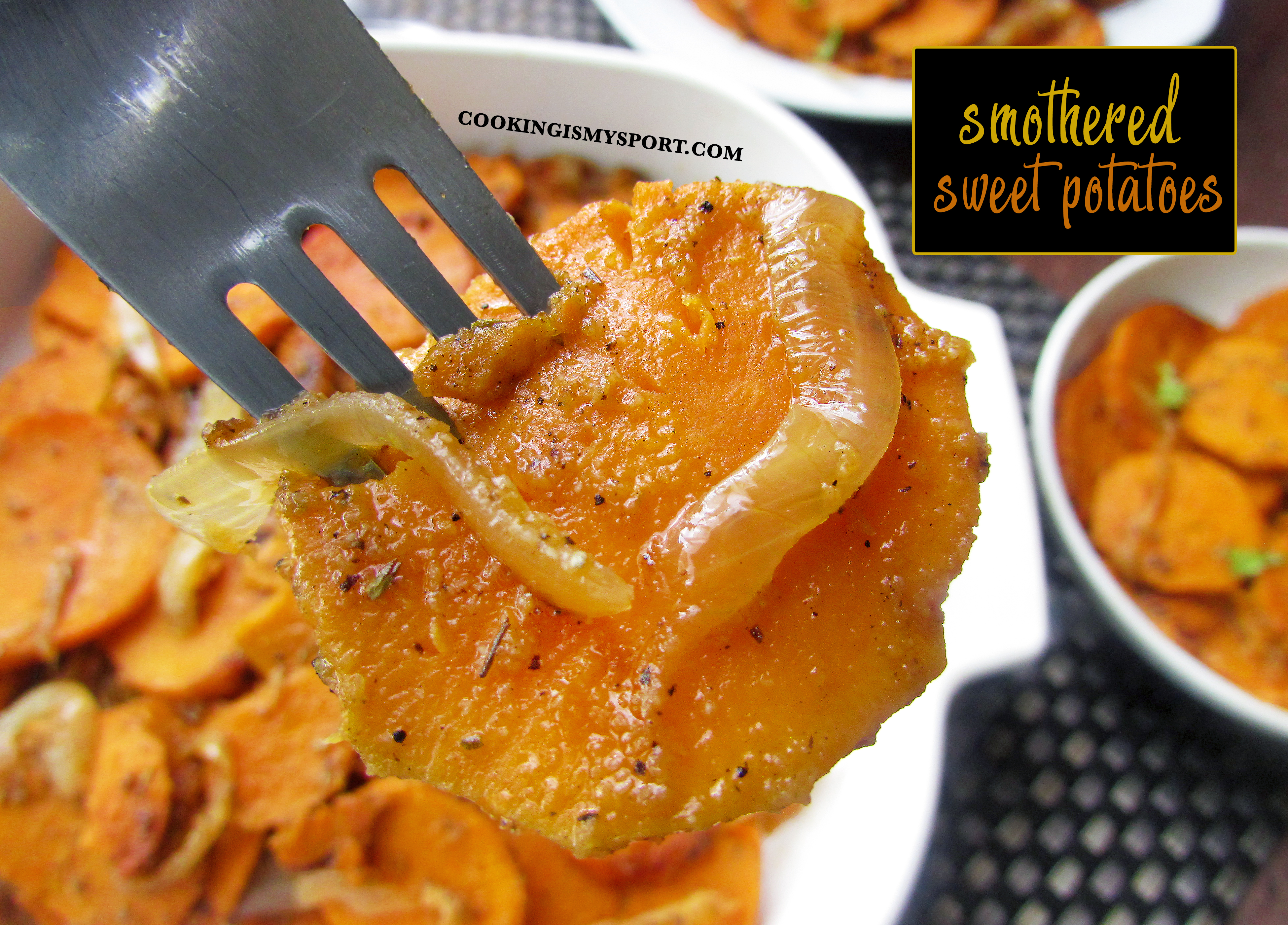 I’m actually partial to sweet spuds as opposed to Russets. I’m surprised it took me this long to getting around to sharing this recipe; it’s probably because so far as ‘recipes’ go, there’s not a whole lot of rigid structure or rules to smothered potatoes. I don’t specify how much of the spices to add because after so many years, it’s really become a kind of ‘instinctual’ preference. You season them until they taste right. If you’re really that nervous about it, go easy with the salt and it’ll be fine. 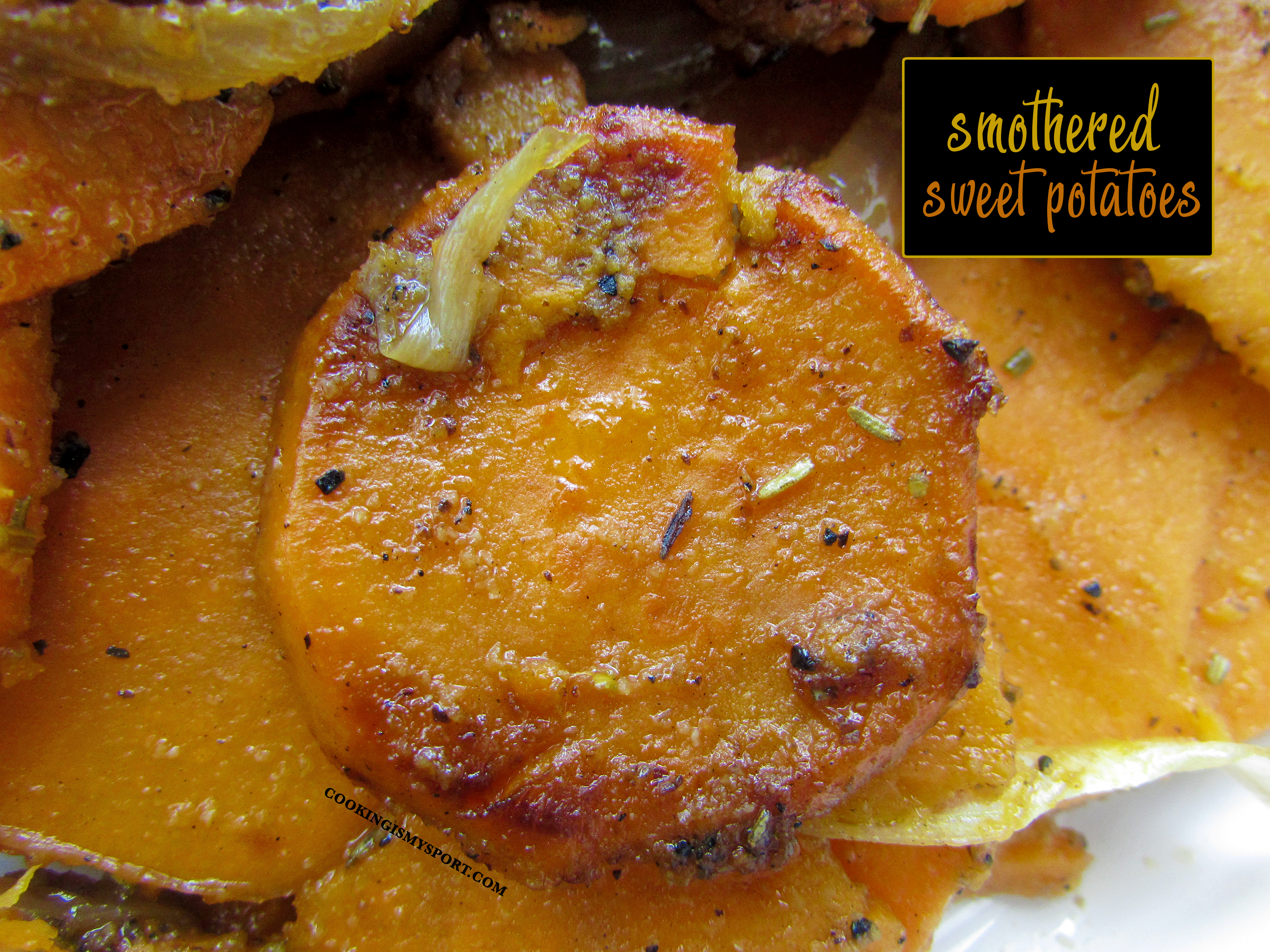 Smothered potatoes made the ritual of Daniel fasting infinitely easier for us to do growing up. Potatoes are still a comfort me for me, and I enjoy these so much that I still like to make them now as a favorite side dish. Try this dish out for yourself and I think you’ll understand why.

Drizzle about 2 tbsp of the bacon grease into the pan, swirl about to evenly cover the surface.

Add enough potatoes and onions to pan to fill up. (You will have to do this in multiple batches).Sprinkle a generous coating of the onion powder, garlic powder over the potatoes and onions. Stir to evenly coat, then add a little bit more if necessary.

Add the salt and pepper to the potatoes and onions (be a little less generous with these, I typically do about 1 tsp of each per batch).

Cover the pan and allow to cook until potatoes are brown, tender and slightly crisp at the edges, stirring occasionally to avoid sticking at the bottom of the skillet.

Repeat steps 2-6 in batches with the remaining potatoes and onions and serve.