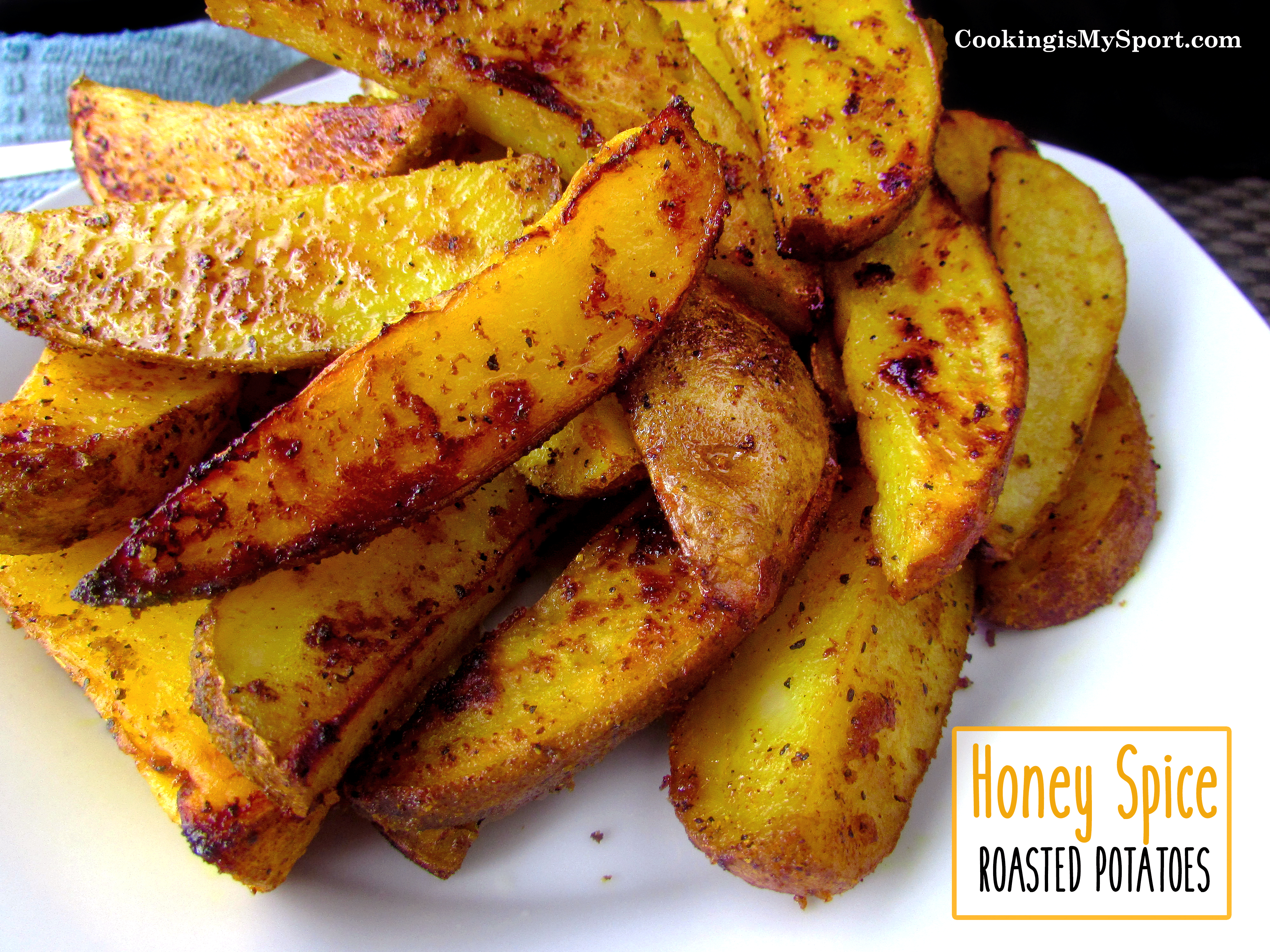 I hate doing it. I can and will eat leftovers for days until the food is gone before I’ll toss it in the trash or garbage disposal out of ‘boredom’. And even when/if it does spoil and I HAVE to throw it out, I still cringe from irritation and guilt.

It could be because I love food. It could also be because I’m cheap/low in $ funds 98% of the time, and don’t want to see what my money paid for being wasted. 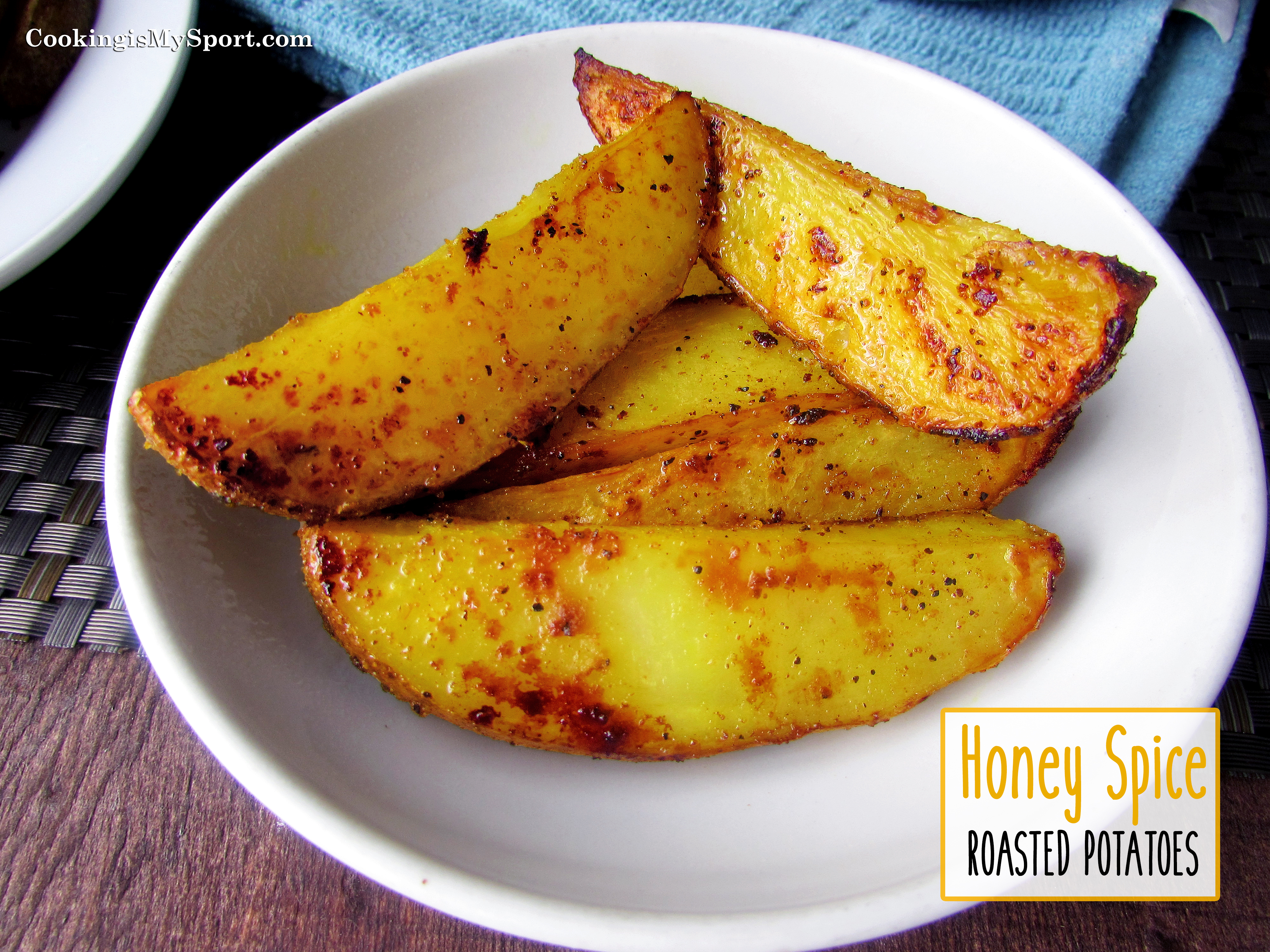 The “inspiration” for this dish was really nothing more than the fact that we had a big bag of russet potatoes in the kitchen that we’d bought as apart of a discount, telling ourselves we’d make baked potatoes. 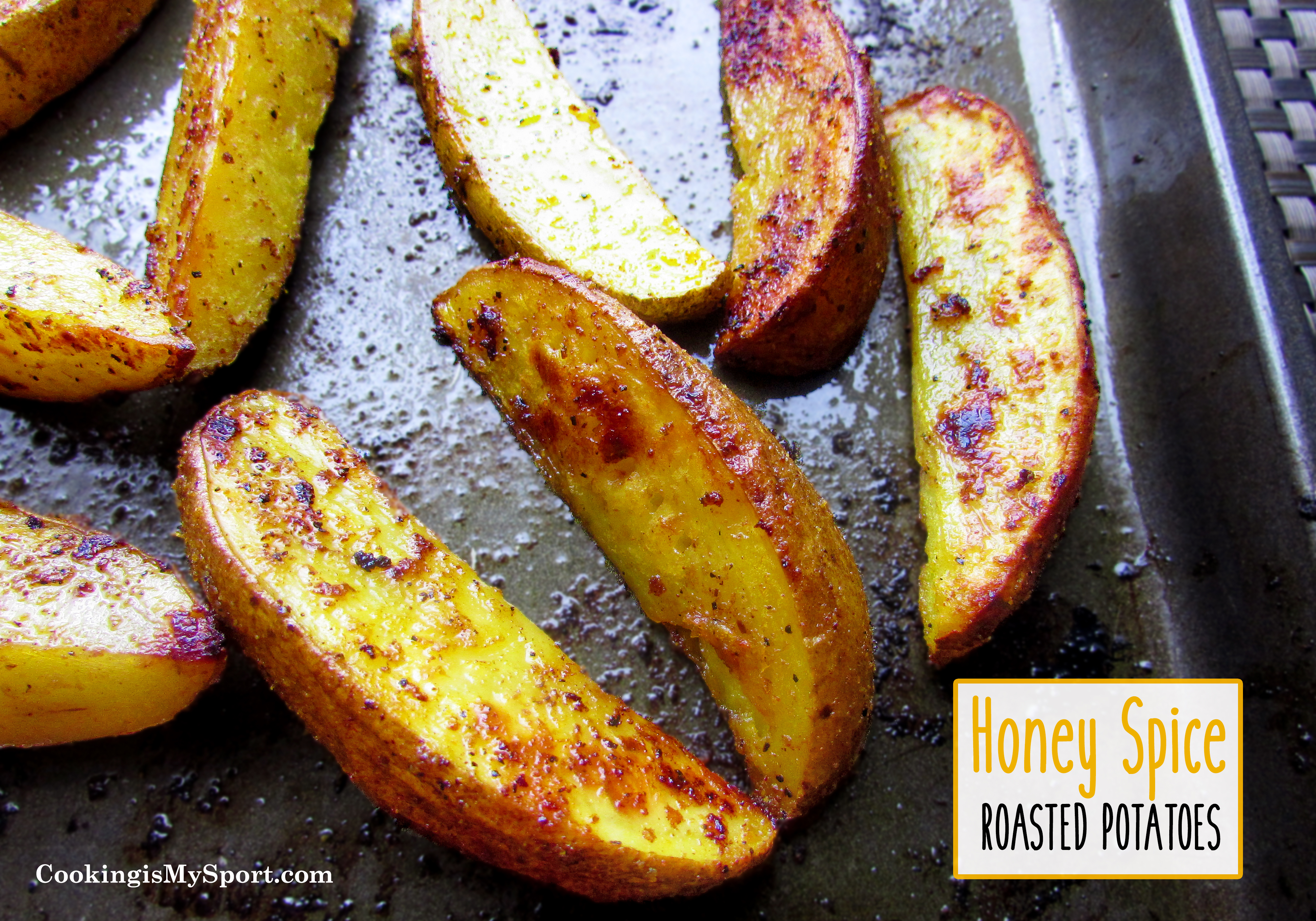 My process for coming up with this went as follows: I washed and cut the potatoes, opened my spice cabinet and literally just started taking bottles out and shaking the contents together into a bowl if I thought it sounded like they’d taste good when combined. The ‘wild card’ in the bunch was the turmeric. Turmeric’s got a pungent, gingery, almost spicy orange aftertaste to it. It’s used a lot in curry dishes in Asian and Indian dishes and is actually a pretty healthy spice for your as well.

Its bright yellow and can also stain your counter tops and hands yellow for a few days if you’re not careful, but moving on. 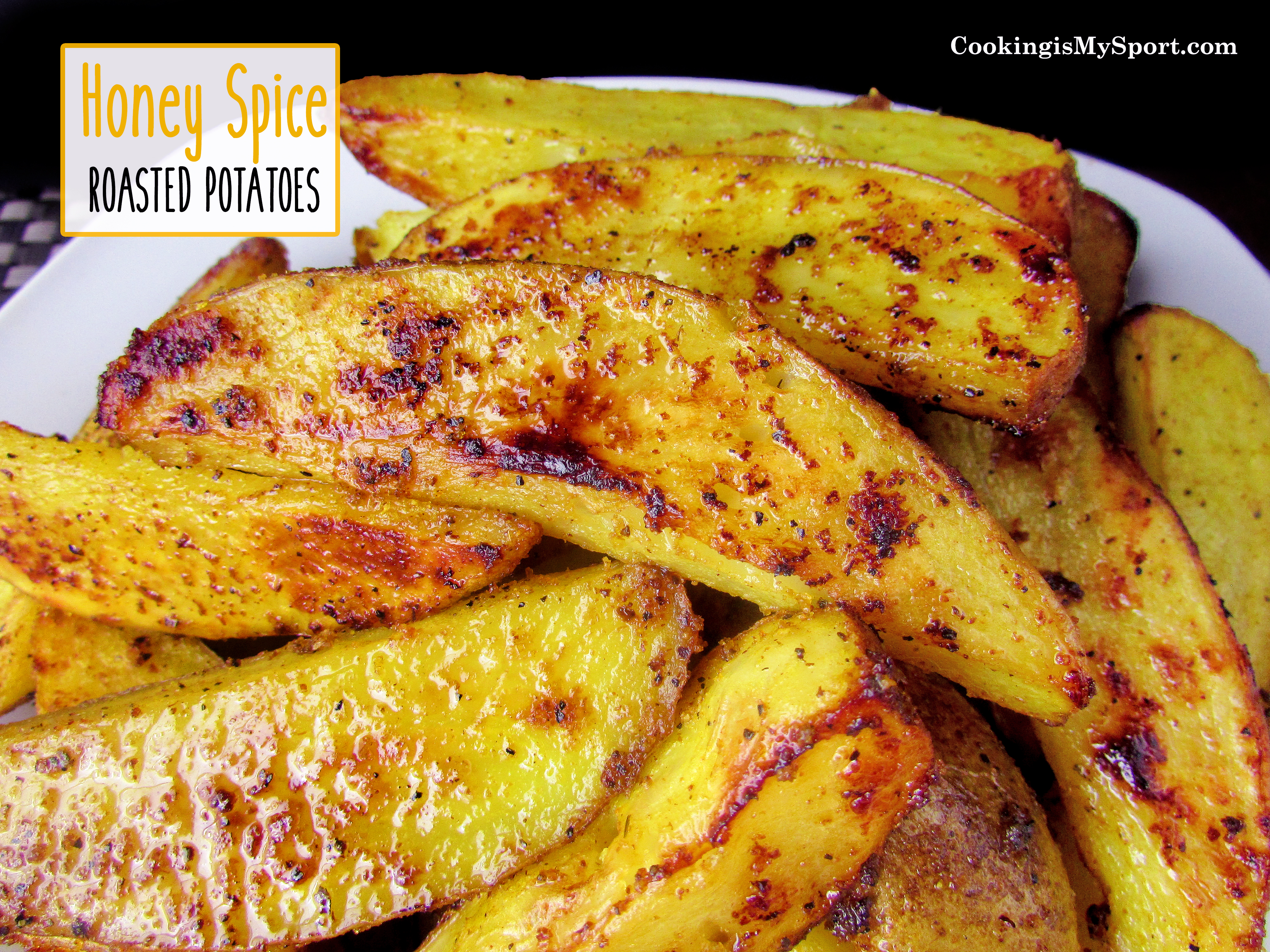 After cutting them up, I combined the turmeric with some oil and other spices into a paste, then tossed that together with the potatoes. After cranking up the oven I spread them out on a pair of sheet pans and roasted them until they were tender on the inside and the oil on the pans made them crispy on the outside edges. 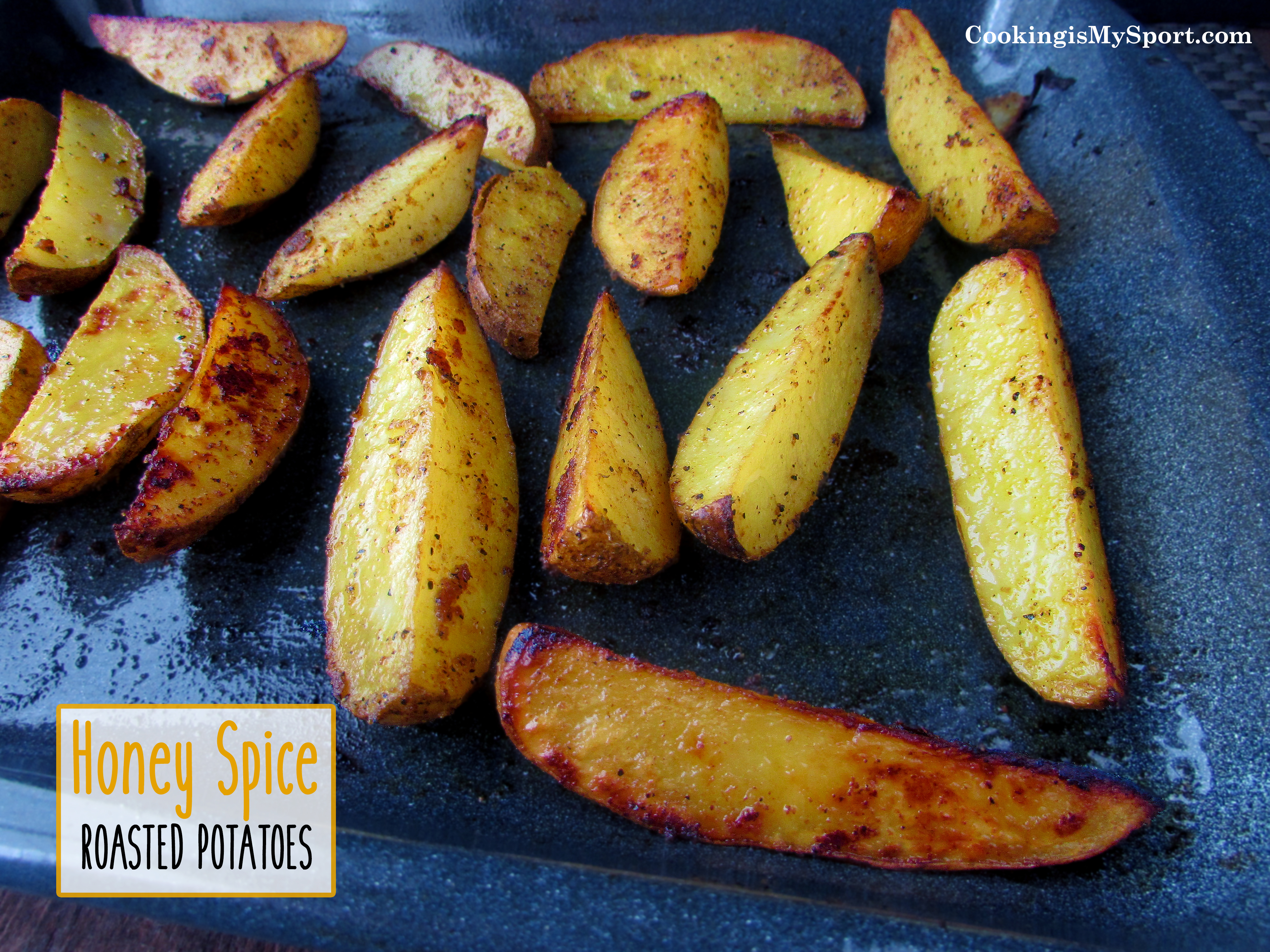 The cumin gives the potatoes a smoky earthy flavor while the turmeric and honey provides a spicy sweetness that marries the flavors together very nicely. If Russet potatoes aren’t really your thing, then that’s fine: I can see this working VERY well with Yukon Gold or sweet potatoes too. If wedges aren’t your thing then you can also just cut them into large or smaller chunks and adjust your roasting time to be longer or shorter as needed.

There’s a certain occasion coming up on Thursday where a lot of Americans get together and do a lot of eating. If you still need an easy and delicious side dish for that occasion that will still feed a lot of people, then I’d offer up this one for consideration.

Linking this post up to Fiesta Friday #146 co-hosted this week by Antonia @ Zoale and Petra @ Food Eat Love.

Cut the potatoes in half lengthwise, then cut each half into thirds/wedges, making sure they are more or less the same size and width to make sure they cook evenly.

Place the potatoes in a  plastic re-sealable gallon size bag.

In a small bowl, combine all of the remaining ingredients together and mix together with a fork or whisk. It should resemble a loose kind of paste but still be fluid enough to coat the potatoes. If it’s still to thick, drizzle in additional oil into the dressing by tablespoons until it’s liquid-y enough.

Spray two half sheet pans well with non-stick cooking spray. Divide the potatoes between the pans and spread out in one even layer.

Roast for 35-40 minutes, mixing the potatoes and switching the pans around half-way through until they are fork-tender in the middle and crisp at the edges.