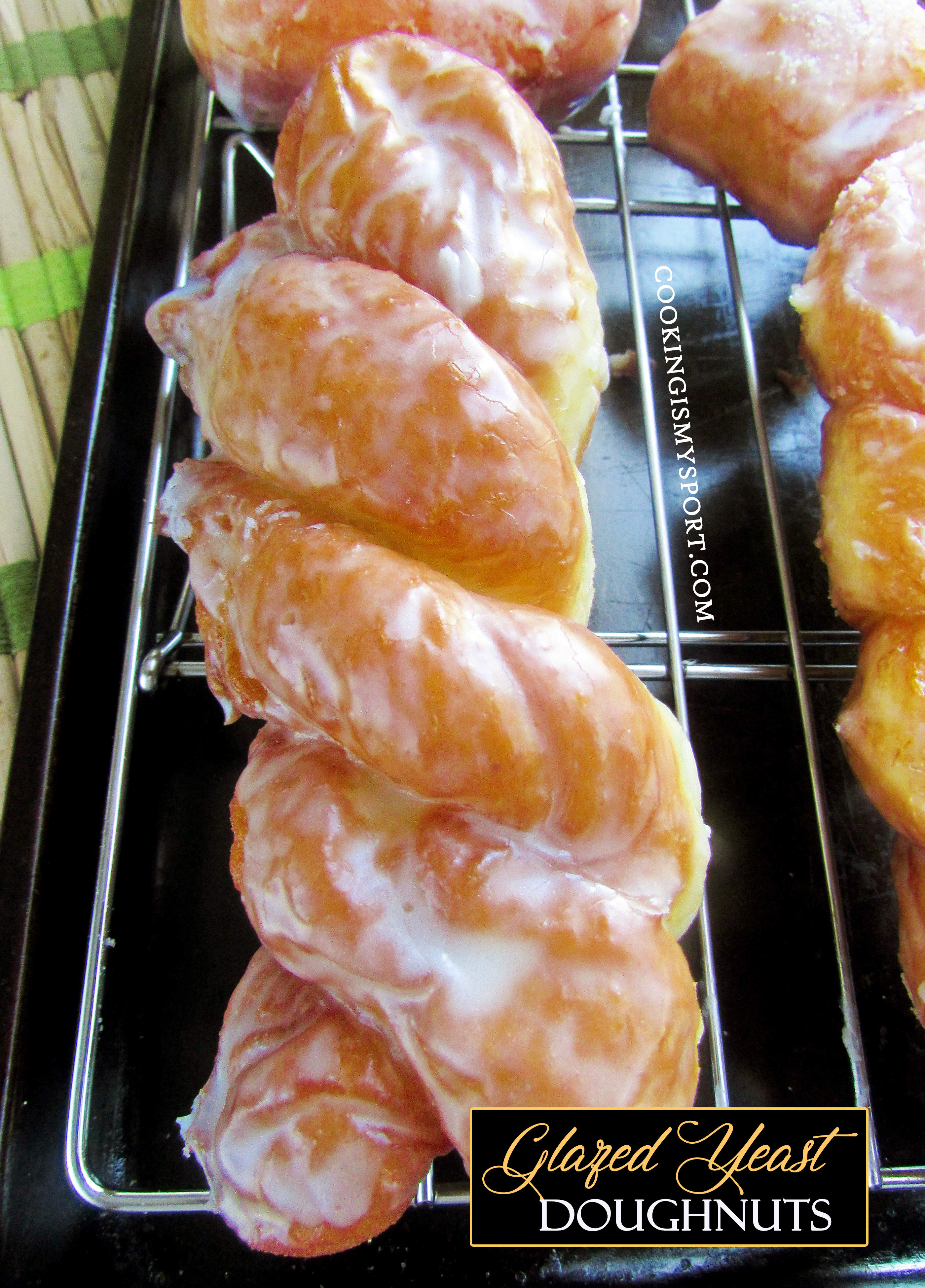 One of the earliest food memories that I have is a love for glazed doughnuts. My mom’s taught Sunday School for practically my entire life and every Sunday morning on the drive to church I remember sitting in the back seat, still groggy, but also silently praying in my mind that she would stop by a cornerstore down the street from the church that sold the most delicious doughnuts for dirt cheap. My favorite one to get would be a plain glazed doughnut ring. 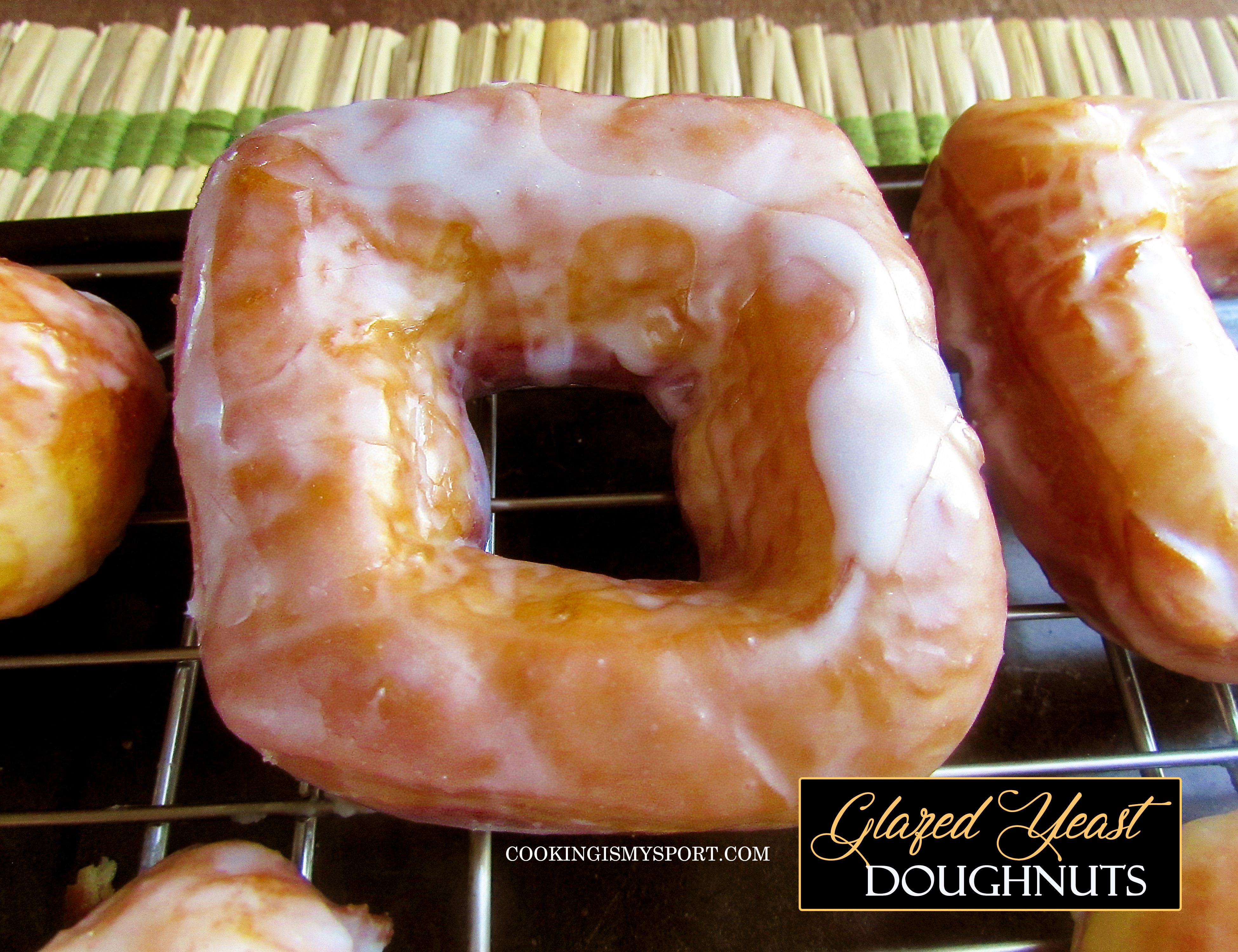 No sprinkles. No frills. No bells & whistles. A plain, glazed yeast doughnut was really all I would want. The Sundays when I got one were instantly brighter Sundays. Perfectly glazed doughnuts were delicious enough to do that all on their own–they still are.

I know there’s nothing quite like a glazed Krispy Kreme, especially when it comes hot off the belt. (Seriously, I’m drooling just thinking about it now), but I will also say that making glazed doughnuts at home can deliver the goods as well. 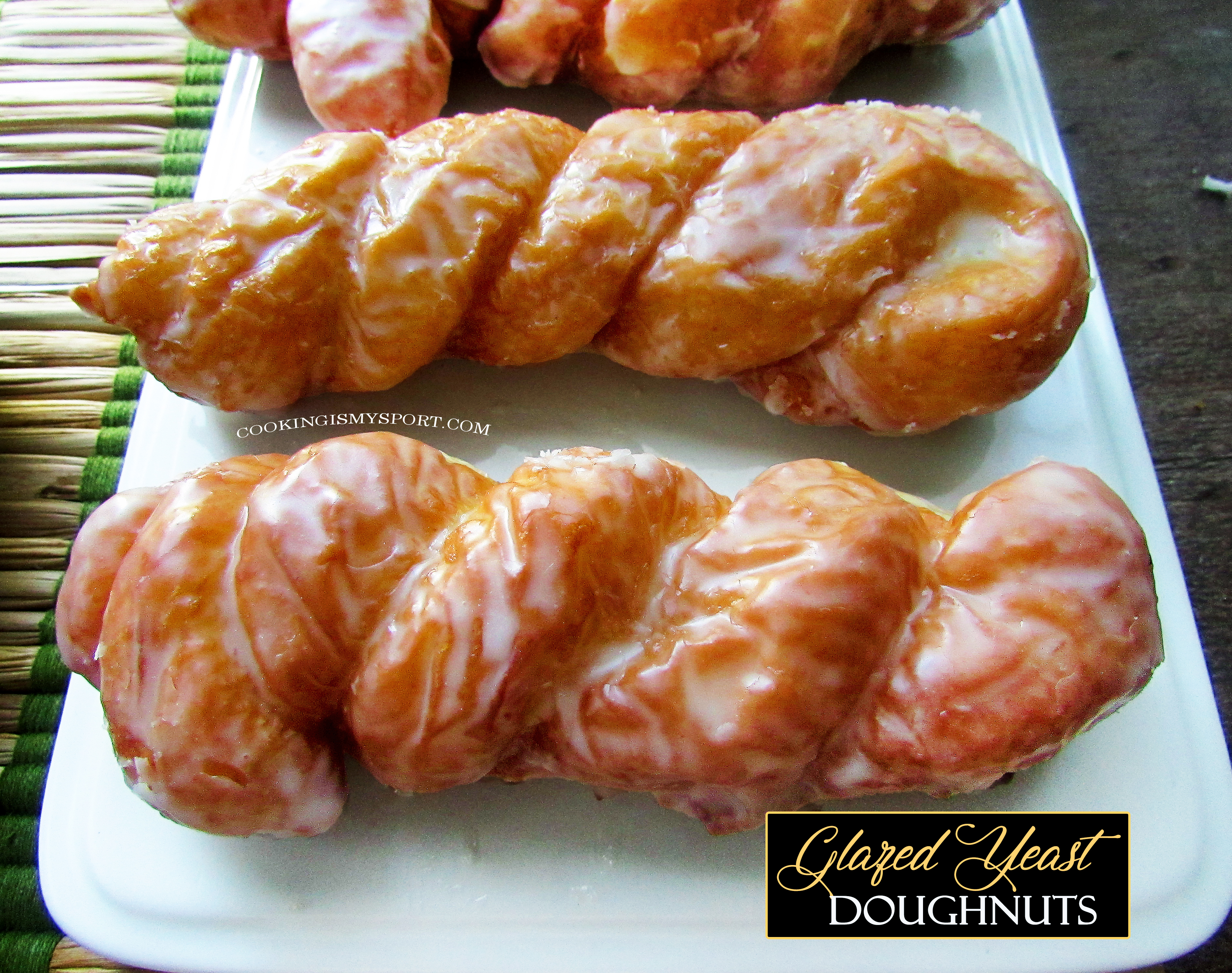 I thought that a perfect glazed doughnut would be the perfect example to use for today’s post. 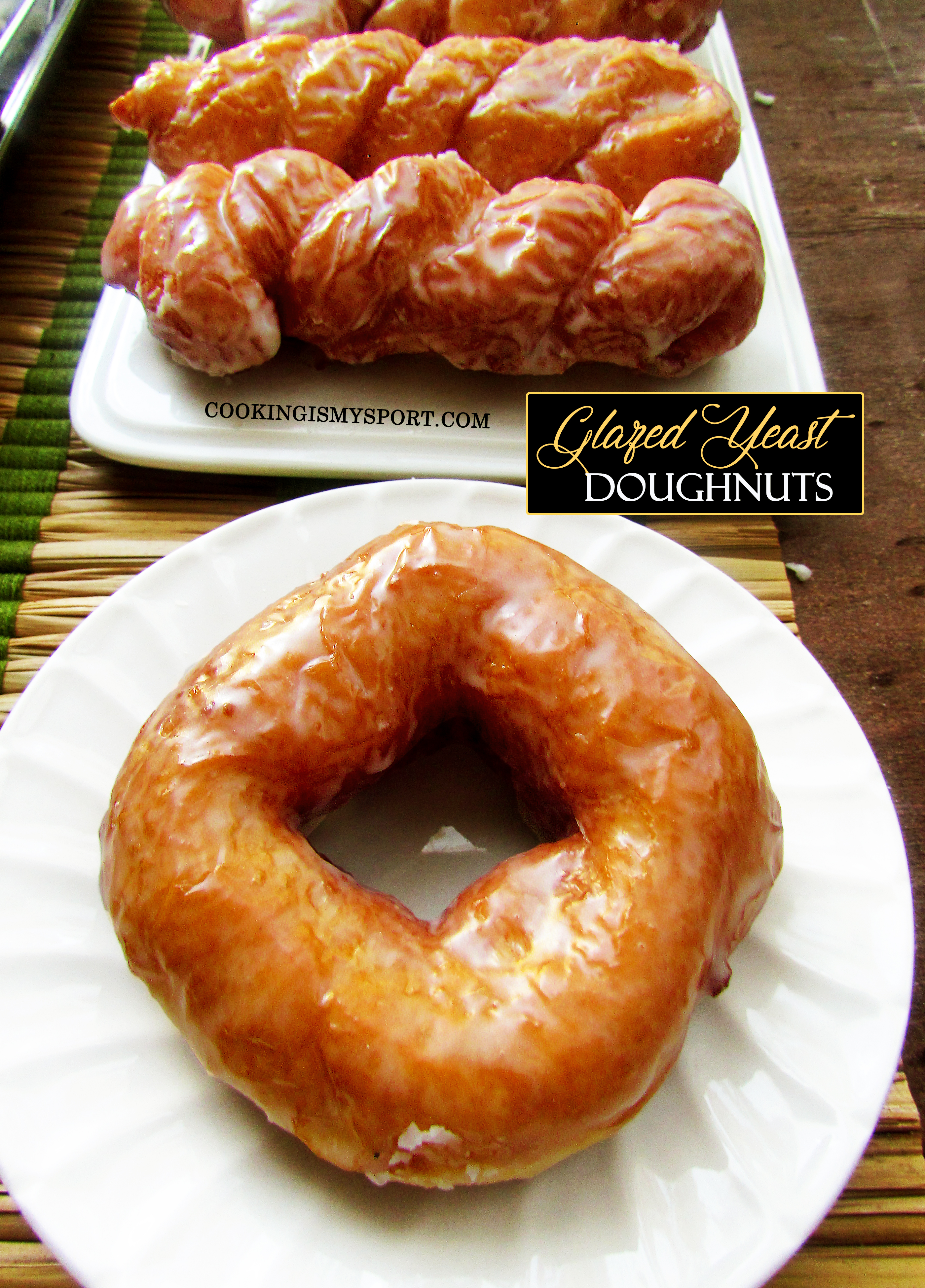 So aside from the inclusion of yeast, what makes yeast doughnuts different from cake donuts? The biggest difference is texture. Cake donuts are given that name for a reason: the texture is going to be soft, but dense. I think of it almost being like a coffee cake that gets deep fried, then dunked in cinnamon sugar. Yeast doughnuts are much more lighter and airier on the inside. See what I mean? 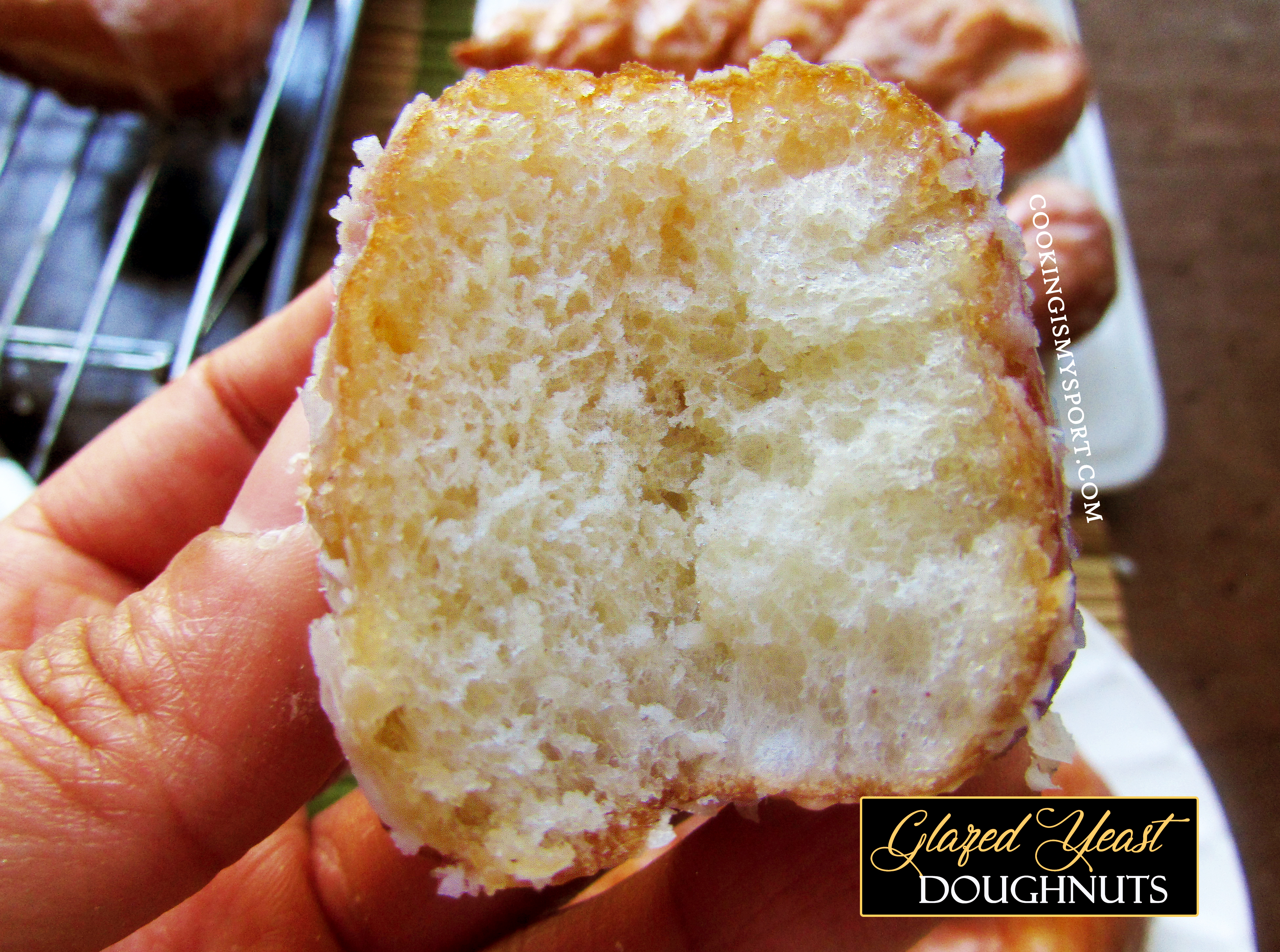 With yeast, there’s going to be a bit more time needed to set aside for the dough because unlike cake donuts, the yeast will need two rising times. The first is for the whole mass of dough, the second is for after you’ve shaped them into rings–OR, if you wanted to get creative with it, you can form them into cruller twists like you see in the pictures. 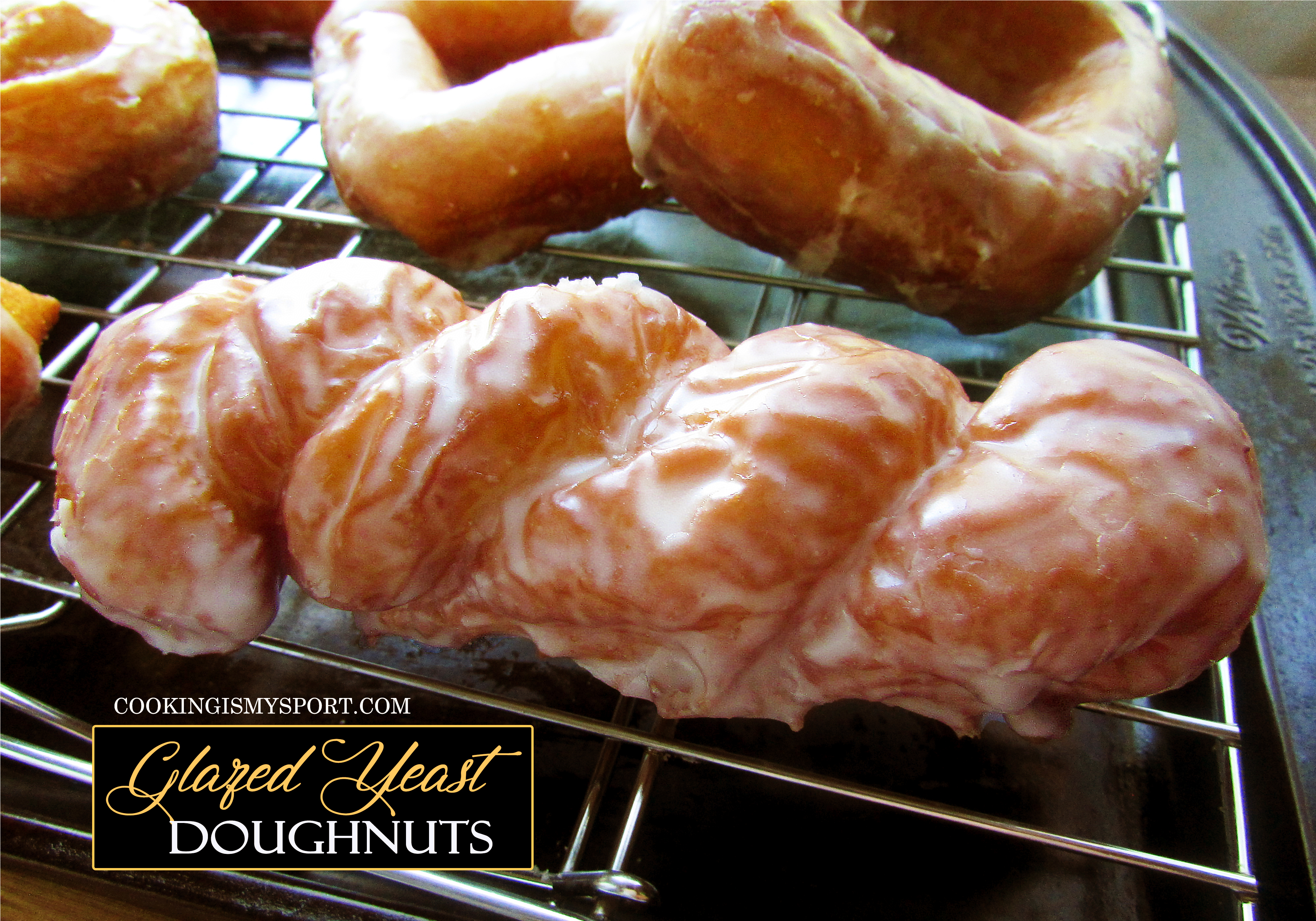 This dough is admittedly, lightly sweetened. It’s main flavors are vanilla and nutmeg–they’re simple flavors that leave plenty of room for the real star of the show: that glaze. After you dunk the still warm doughnuts in the glaze,  you then allow them to sit for a few minutes so that they can drip off the excess and allow the residual glaze to set.

Don’t they look just divine? I promise you that they tasted even better than they look, which is why I encourage all of you to give them a shot yourself. You won’t be disappointed.

Sharing at this week’s Fiesta Friday #236, co-hosted this week by Julianna @ Foodie on Board and Debanita @ Canvassed Recipes.

In a small bowl pour the warm milk. Sprinkle the yeast on top. Sprinkle the 1 tablespoon of white sugar on top of that. Allow to sit for 10 minutes, until proofed and frothy.

In a small bowl combine the beaten egg, melted butter and vanilla extract. Set aside.

In the bowl of a standing mixer fitted with paddle attachment combine the flour, 1/4 cup of sugar, salt and ground nutmeg until just blended. Switch to the dough hook. Pour in the yeast mixture as well as the egg mixture to the dry ingredients and stir until a soft dough is formed. Cover and let rest for 5 minutes.

Knead the dough for 6-8 minutes until it’s smooth and soft. Place the dough in a greased bowl, turn it over once, then cover with a piece of plastic wrap and a damp kitchen towel. Allow to rise in a warm place for 1 1/2-2 hours, until doubled in size.

Turn the dough out onto a well floured surface and gently deflate. Roll out to about 1/4 inch thick. Cut out doughnuts with a 2 1/2″ to 3″ round cutter, or form them into cruller twists that you pinch at the ends. Remove to a parchment paper lined baking sheet. Cover loosely with greased plastic wrap and let the doughnuts rise for 30 minutes to an hour, until doubled in size.

Meanwhile heat 2 inches of oil in the bottom of a heavy bottomed pot to 350°. Prepare 2 baking sheets; one lined with paper towels, another lined with foil on the bottom & a wire rack on top. In a shallow, wide dish mix together the powdered sugar & milk with a fork. Keep the dish nearby.

Carefully place the doughnuts in the oil, 2 or 3 at a time, and fry until golden brown, about 60 seconds per side. Remove from the oil with a slotted spoon and drain on the baking sheet lined w/paper towels. Wait 1 minute or 2 until doughnuts are warm (but no longer piping hot), then dip the tops in the glaze. Gently turn over and dip the bottom in the glaze before removing to the foil lined baking sheet on top of the rack. Allow to sit until glaze has set on doughnuts. Eat immediately or keep refrigerated for up to 2 days.