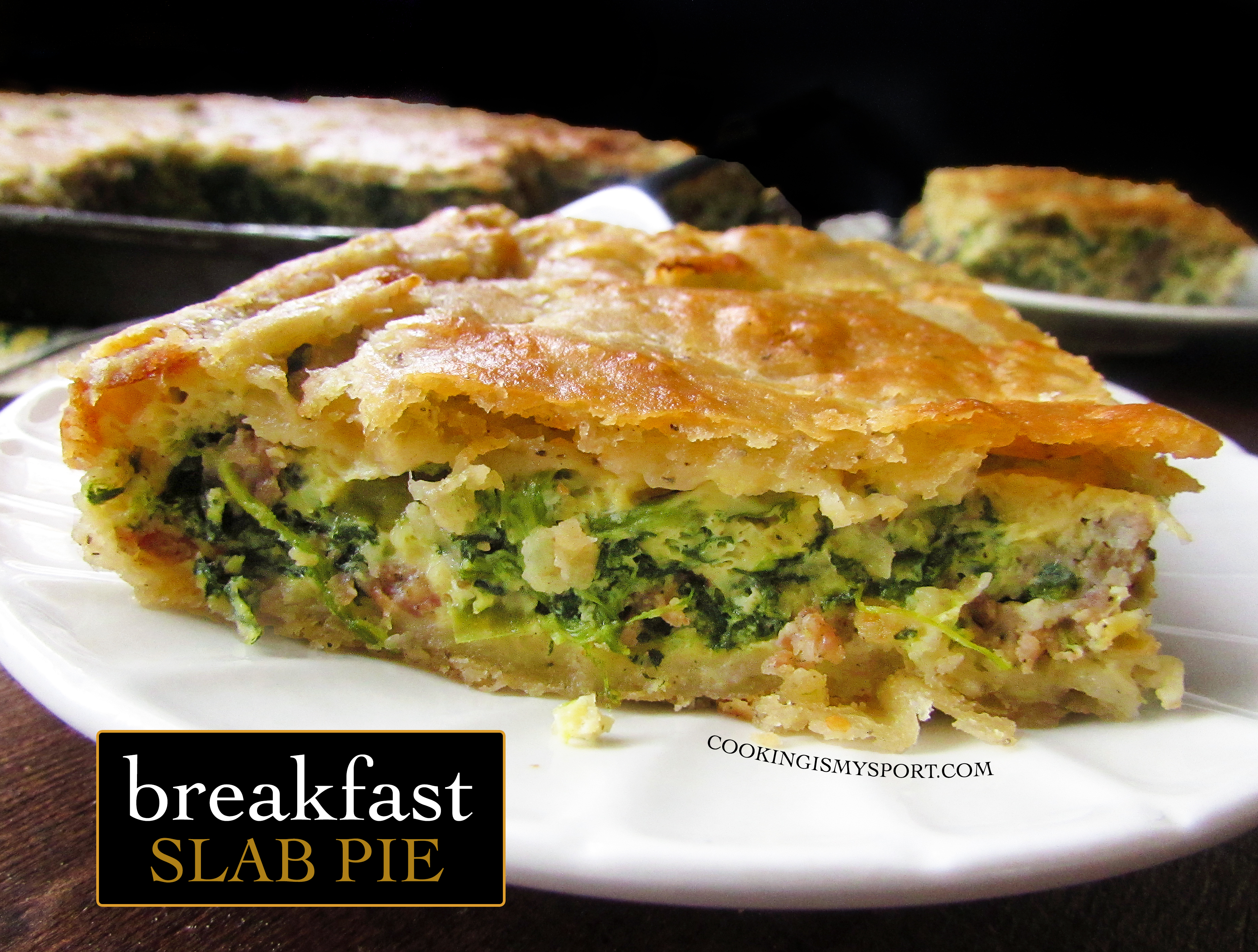 I seriously cannot believe that we are making our way through November already. 2018 is almost over. We’ve already started getting ingredients for Thanksgiving, which I’m always excited for, but it definitely doesn’t feel like it’s going to be happening in a matter of weeks. From there, things REALLY get busy round here, what with the 12 Days of Christmas baking series–I started making my list of this year’s recipes earlier today and I’m already excited to get started on that, so stay tuned. 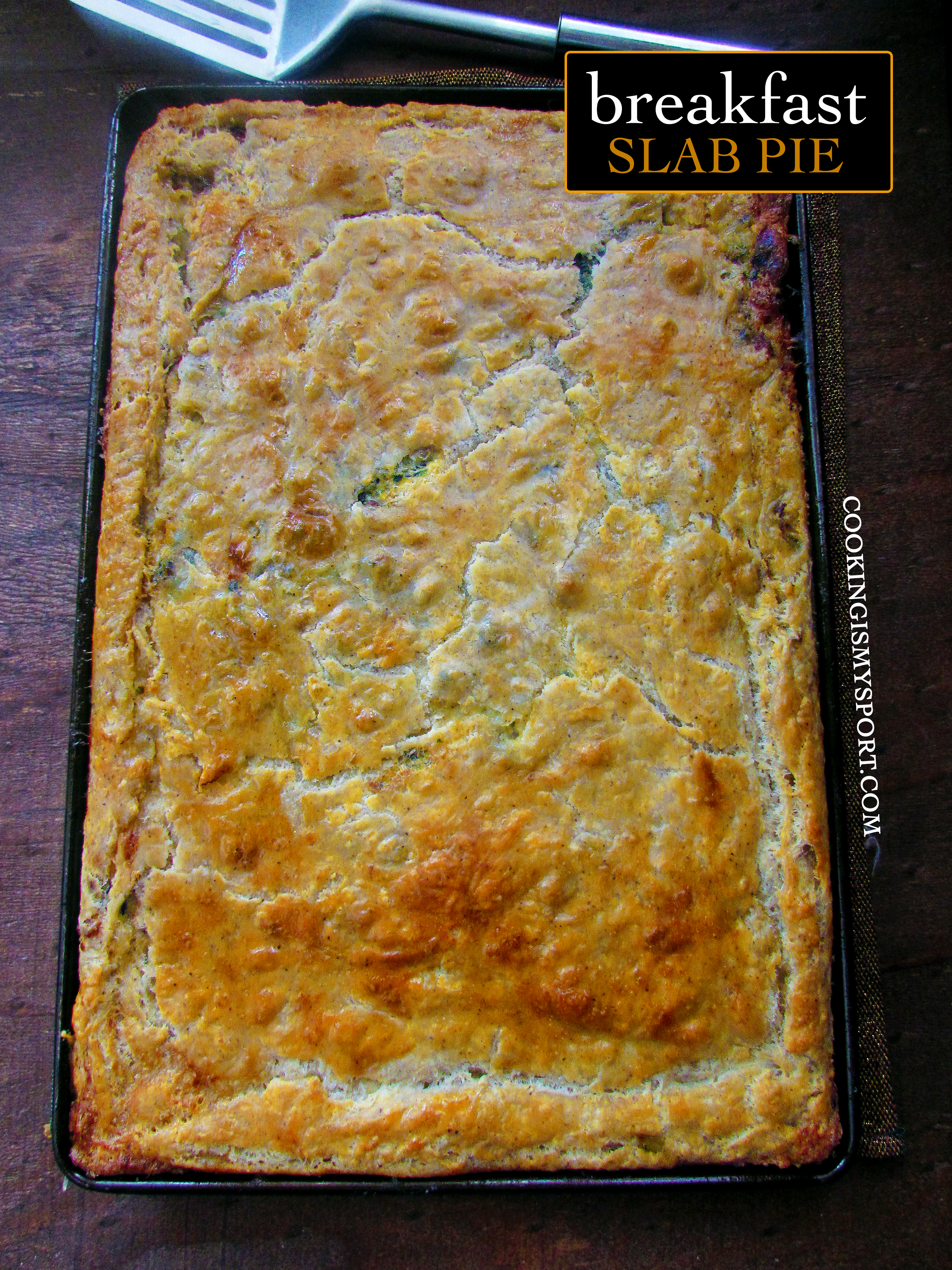 We still have brinner at least once a week in our house, but it’s been a while since I posted a new recipe for breakfast on the blog. I wanted to change that and so this past week, I decided to go ahead and make something new for our brinner. 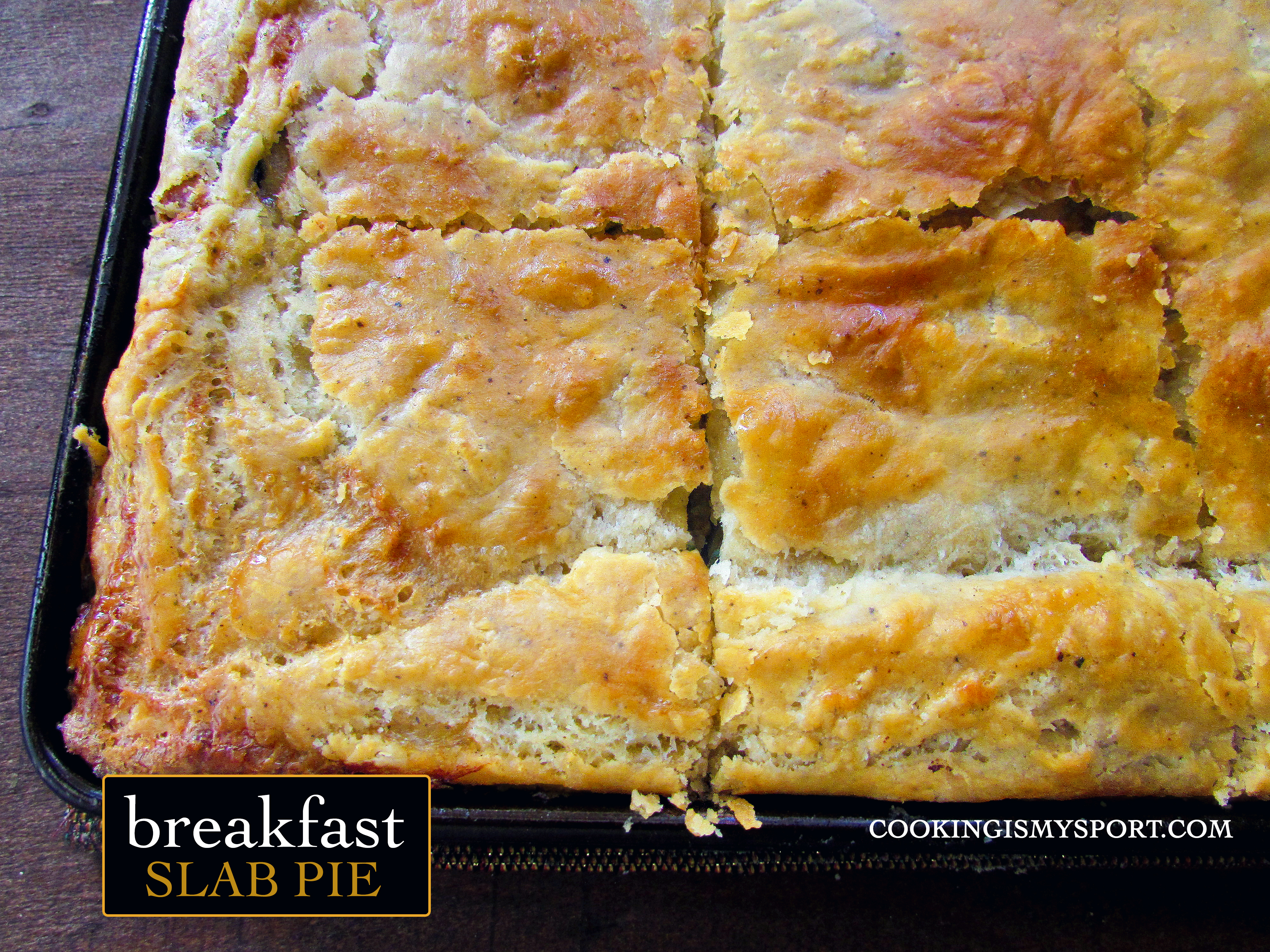 Slab pie is one of those things that I really enjoy baking–more so than a lot of other things that I like. It makes a whole lot of pie for a crowd, with a comparatively low amount of labor. Up until now, I’ve only made sweet fruit dessert slab pies and although they’ve been fabulous I have been curious about what it would look like if I took it to the savory side. 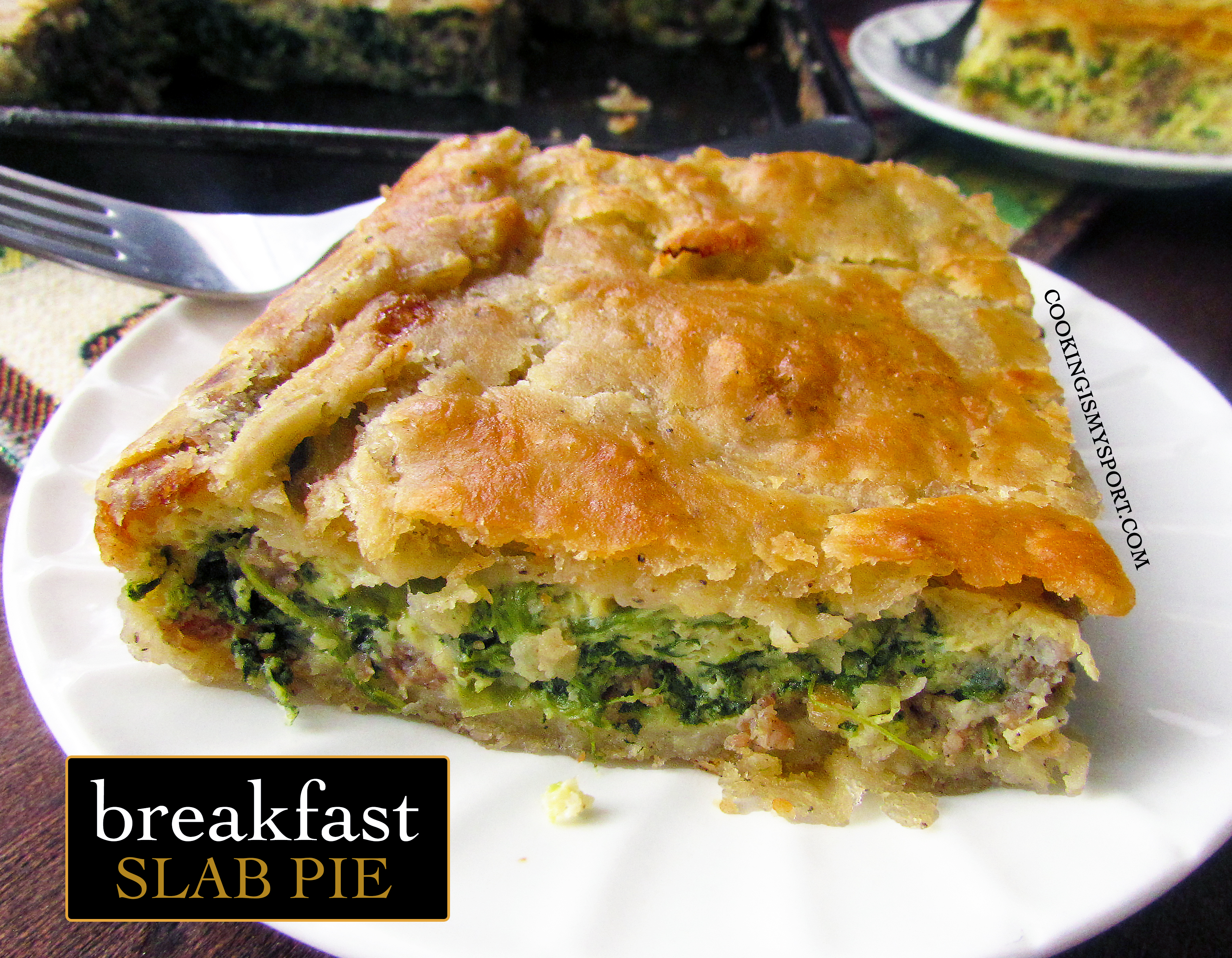 The method for making the pie crust is my normal method of grating frozen butter into the dry ingredients. It might seem ‘extra’ to go to the effort of buying a box grater if you don’t already have one, but I will say it again and again until I’m blue in the face: frozen butter & a box grater will change your pie crust making life. It will also transform the way you make biscuits and scones. If you don’t know, now you know. 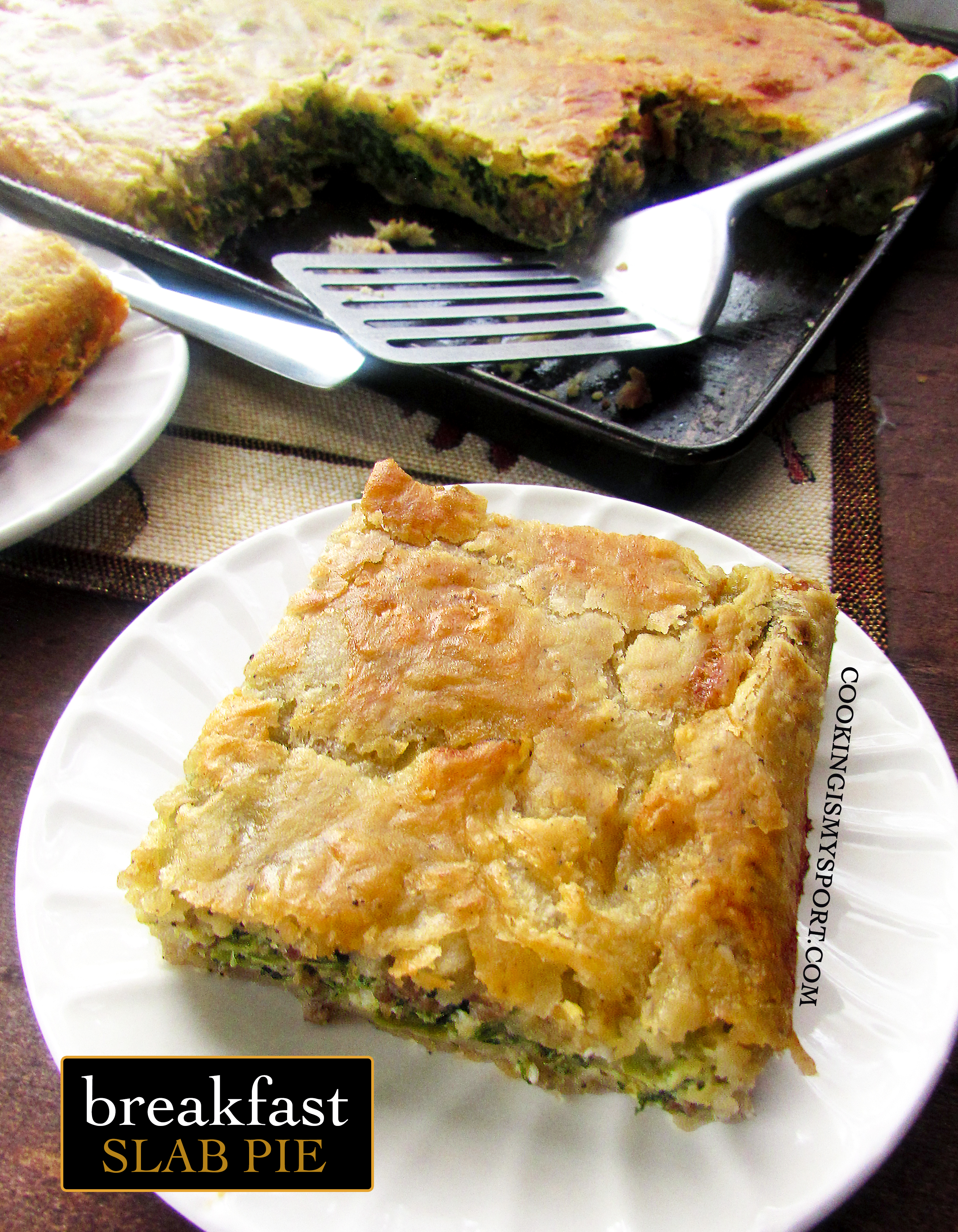 I think one of the best things about this recipe is how versatile the filling can be. I’ve provided a recipe below of what I used for our slab pie, but with breakfast foods in general, the possibilities are endless. It’s no different here. If you don’t like sausage as a protein, use ham. Or mushrooms. Or chorizo. If you don’t like green bell peppers, use red or yellow. If you don’t like spinach, use potatoes. Do what you heart (or tastebuds) tell you to do. 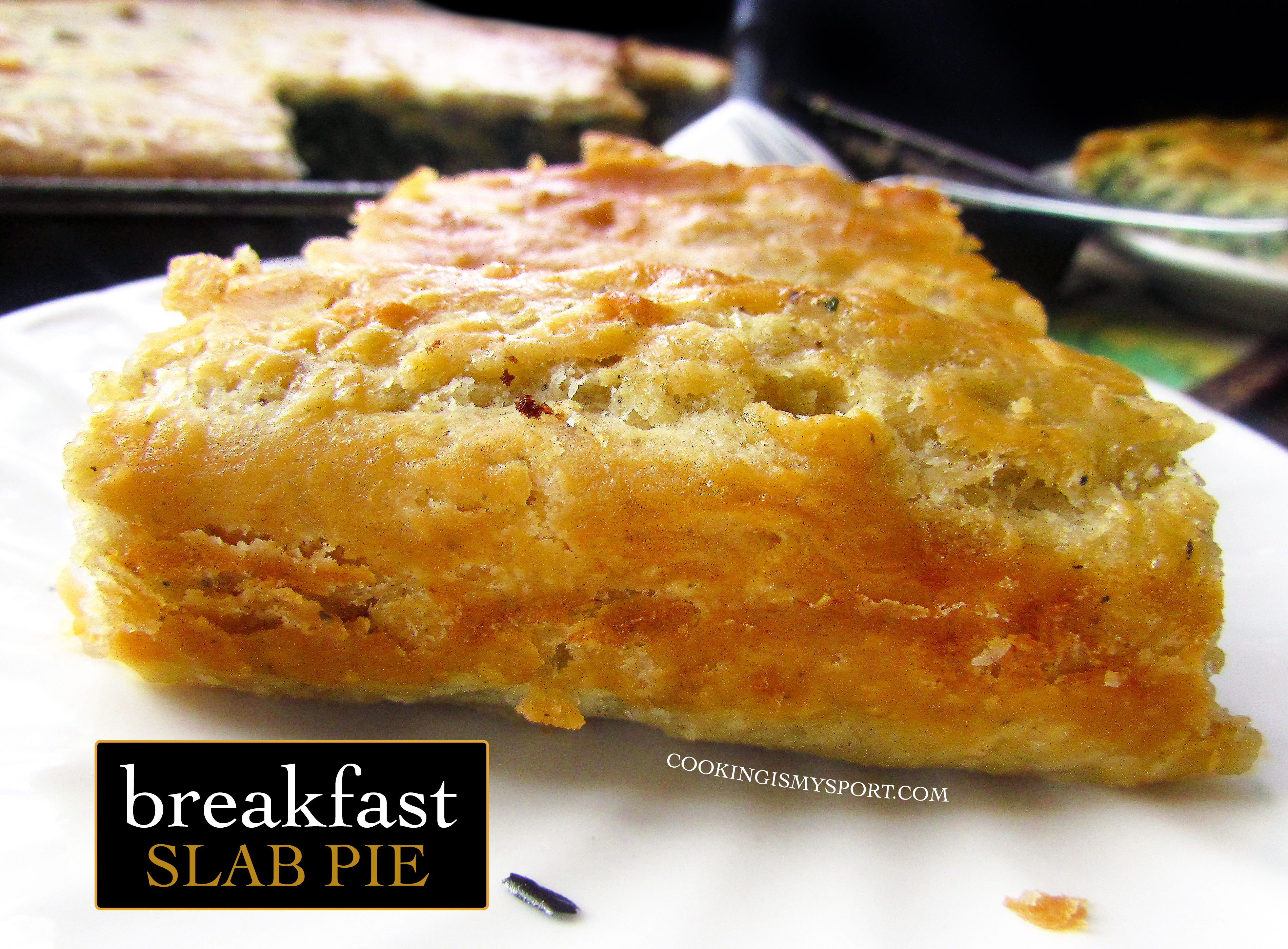 Be careful when you pour the beaten eggs on top; make sure it’s mixed into the filling well so that it doesn’t spill over too much into the crust. Use your fingers to try and make sure the crust is pinched together tight at the corners of the pie especially. Also, bake the slab pie on the lower rack of the oven to make sure you get the golden brown, flakey crust results that you see in the pictures–the closer it is to the heat, the faster it will cook on the bottom.

Have a good weekend, guys!

For Crust: In a medium sized bowl, combine the flour with the salt and pepper. Use the large holes on a box grater to grate the cold butter directly into the dry ingredients. Stir together with a fork. Make a well in the center, then pour in the water. Stir together with a fork and spatula until it forms a craggy mass. Turn it out onto a floured surface and knead it two to three times, just until it comes together. Wrap in plastic wrap and refrigerate overnight.

Preheat the oven to 375 degrees Fahrenheit. Grease a 17 x 11 baking sheet and set aside.

Place the crumbled, browned sausage in a large bowl. In a large skillet, saute the onions, then the bell peppers until they are softened and translucent, about 7-10 minutes each. When finished, add to the bowl of sausage. Mix in the drained spinach. Stir together until evenly combined.

Divide the pie crust in two, making one portion slightly bigger than the other. On a floured surface, roll out the larger portion into a 17 x 11 rectangle. Use your rolling pin to help transfer it to the greased baking sheet, using your knuckles to press the crust into the corners; try to make sure there’s some overhang over the sides of the pan.

Spoon the sausage filling into the crust, smoothing over the top with a spatula. (You may have some leftover; place it in an egg scramble at a later use) Place in the refrigerator. Meanwhile, beat 12 the eggs together, then season generously with salt and pepper. Remove the filled pie from the refrigerator. Carefully pour the beaten egg mixture over the filling, using a fork to help it seep in evenly. Roll out the second piece of pie crust into a rectangle. Drape it over the filling, and crimp the edges to seal the pie.

Use a sharp knife to create 2 steam vents in the center (not too big though, or the eggs may leak out). Beat the remaining egg in a small bowl with some water, then use a pastry brush to brush it over the top crust.

Bake the pie on the lower rack of the oven until the crust is golden and the filling is set, 55-60 minutes. Remove from the oven and allow to cool about 10 minutes before slicing into squares serve.

Sharing at the Fiesta Friday #249, co-hosted this week by Diann @ Of Goats and Greens and Jenny @ Apply To Face Blog.