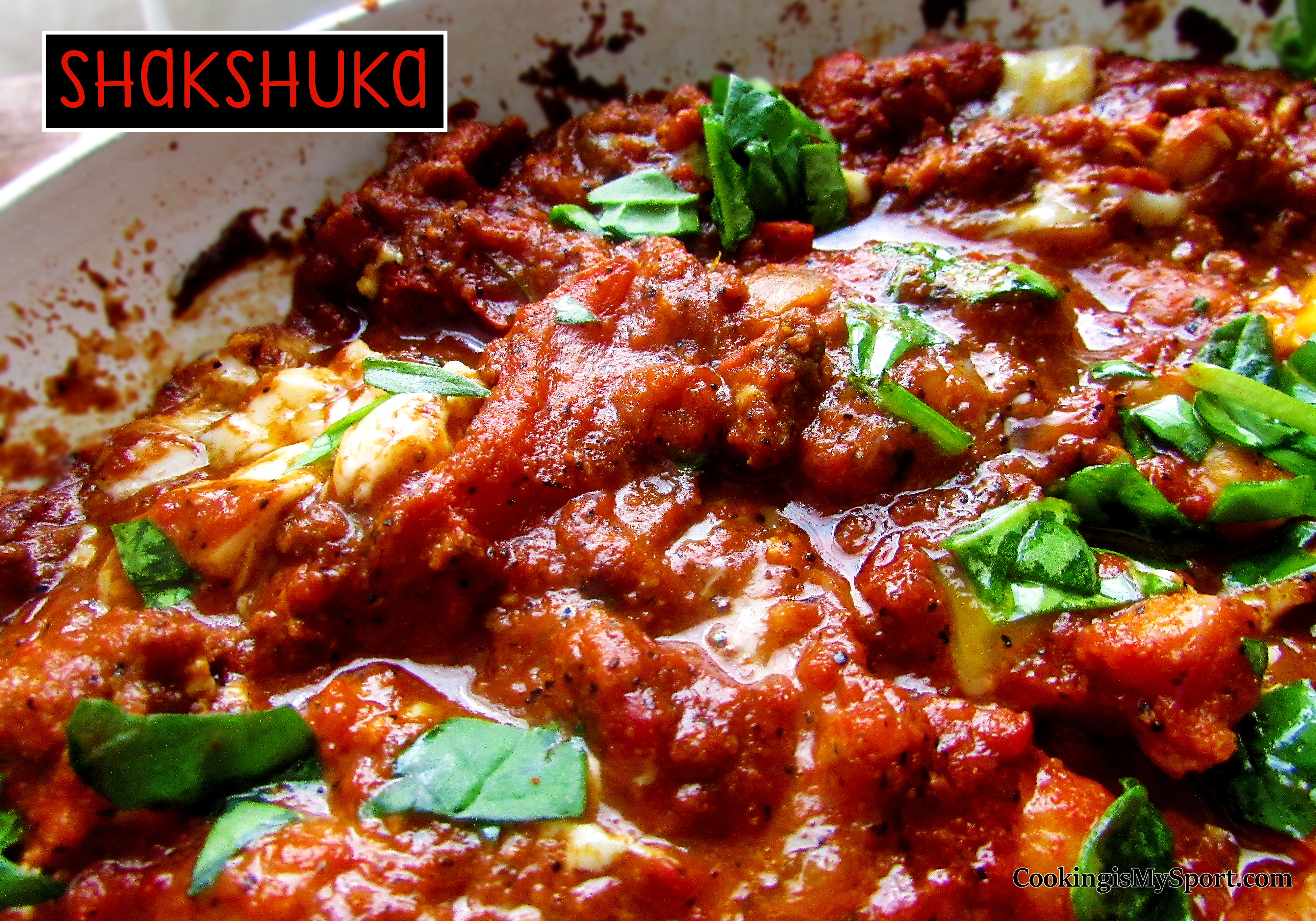 Today, we’re going to have a little chat about eggs and tomato sauce.

I know. That was my initial reaction too. But just hear me out, because it’s not as out there as it may sound.

I know more than a few of you guys have heard of Eggs in Purgatory, right? How about Huevos Rancheros?

This really isn’t so far off from those dishes.

I first heard of Shakshua from watching a cooking show where the host said that they first tried it at a tiny hole in the wall spot in Jerusalem, Israel. It was a meal that was regularly eaten for breakfast/brunch. Normally, I tend to not go much more ‘savory’ than an omelette for breakfast in my preferences, but this dish caught my eye because it just looked SO good. It stuck in my head–and you guys know what happens when a particular dish gets stuck in my head. I just have to try it for myself. 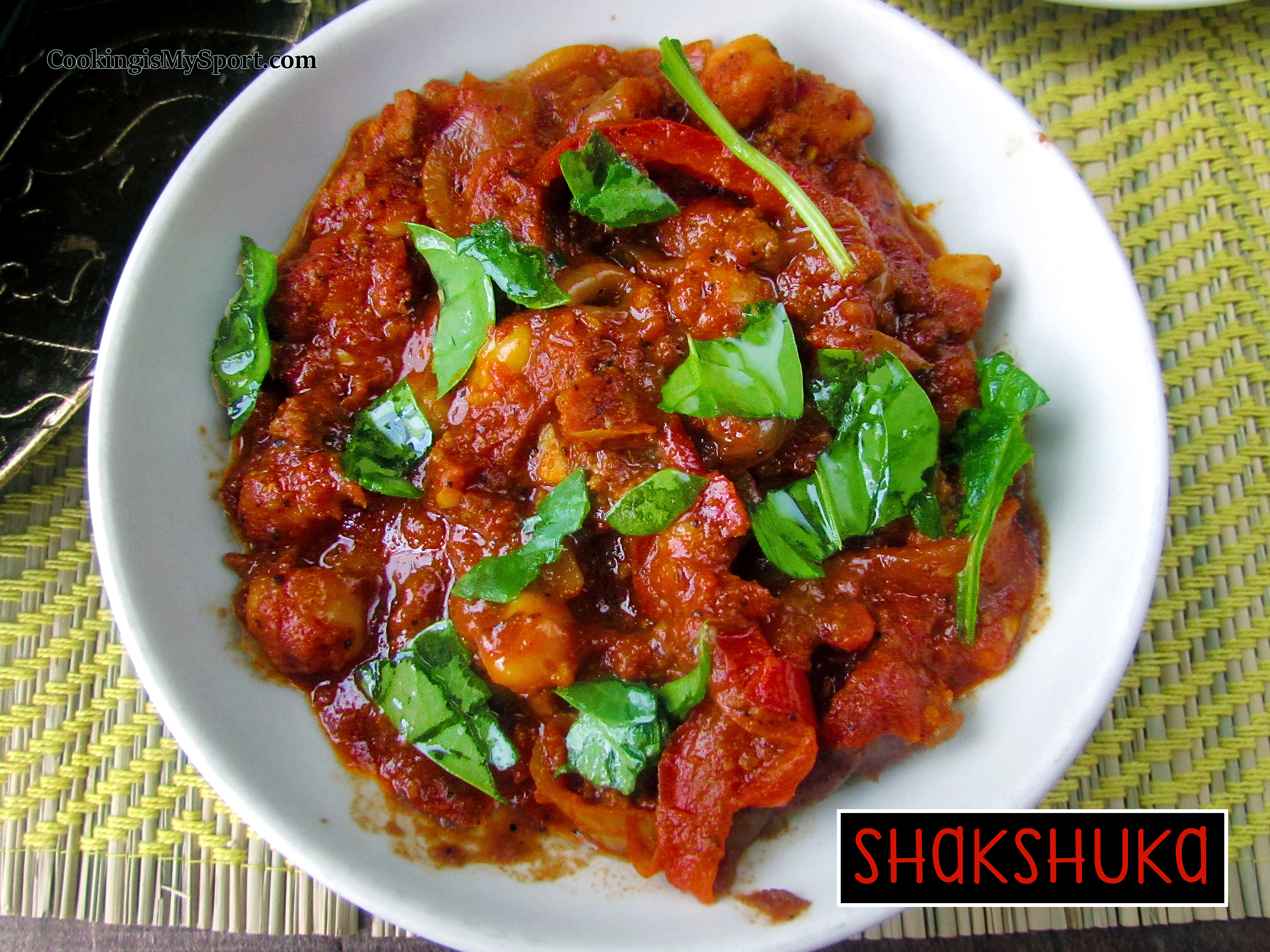 So. Shakshuka. After you’ve tried to say it three times fast, you’re probably wondering what it is, right?

The base is a tomato sauce of peppers and onions that’s heavily seasoned with garlic and smoky spices, then has eggs poached inside of it. It’s also mostly eaten with pita bread that gets dunked in the sauce. The foundation was a great starter for me to start with, then add some of those personal ‘Jess’ touches. 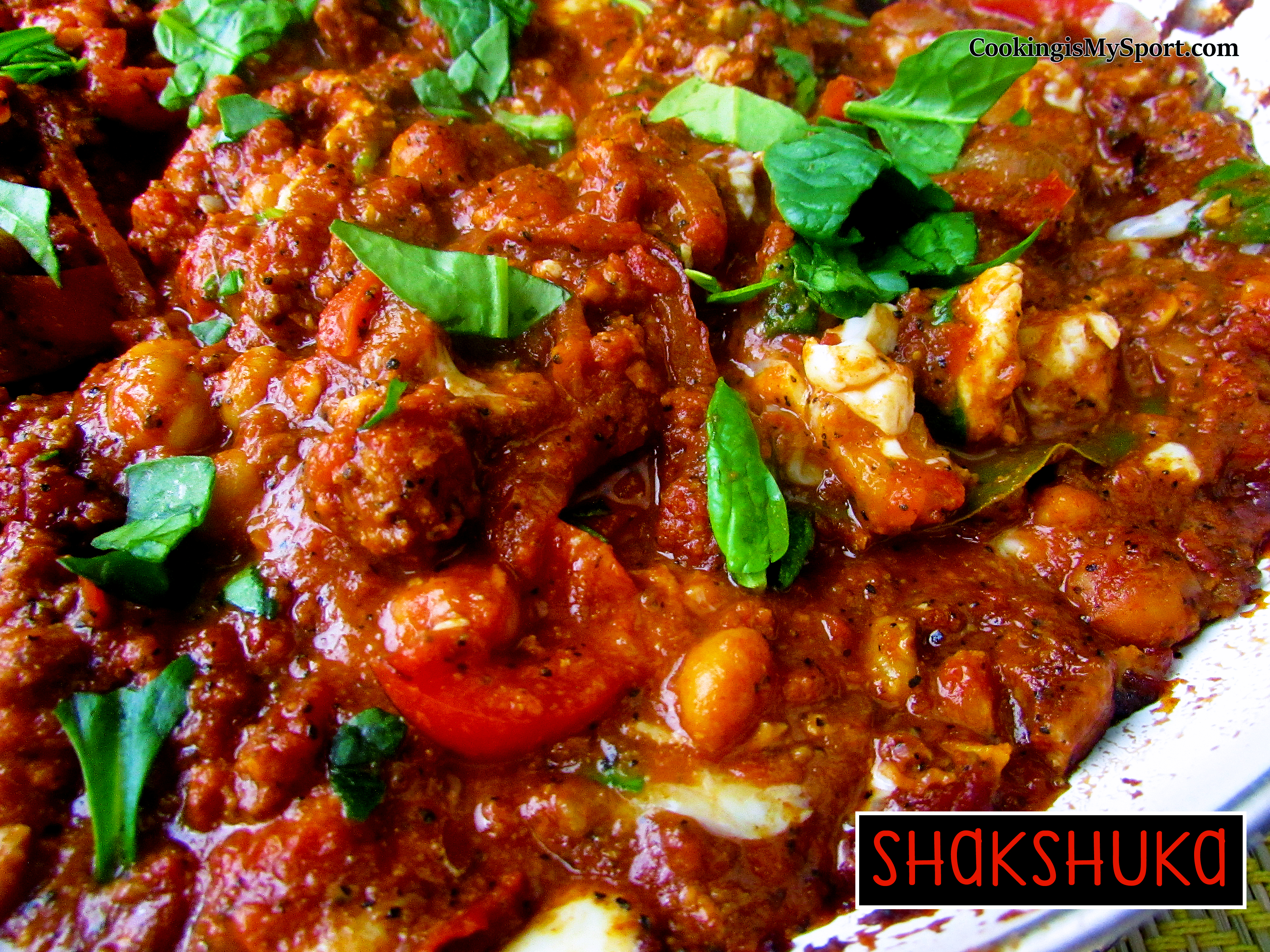 Most of the traditional Shakshukas I’ve seen were vegetarian friendly, with either chickpeas or mushrooms giving the sauce the ‘meaty’ texture. But, well um…we’re carnivores around here so I knew that there was no way that meat was NOT going to make an appearance in a dinner I made. Not a lot; but enough to make it’s presence known. I used ground beef, but ground turkey or sausage would work just as well for any other carnivores. (Oh, and you can absolutely throw in the chickpeas WITH the meat too. Extra protein is nice.) 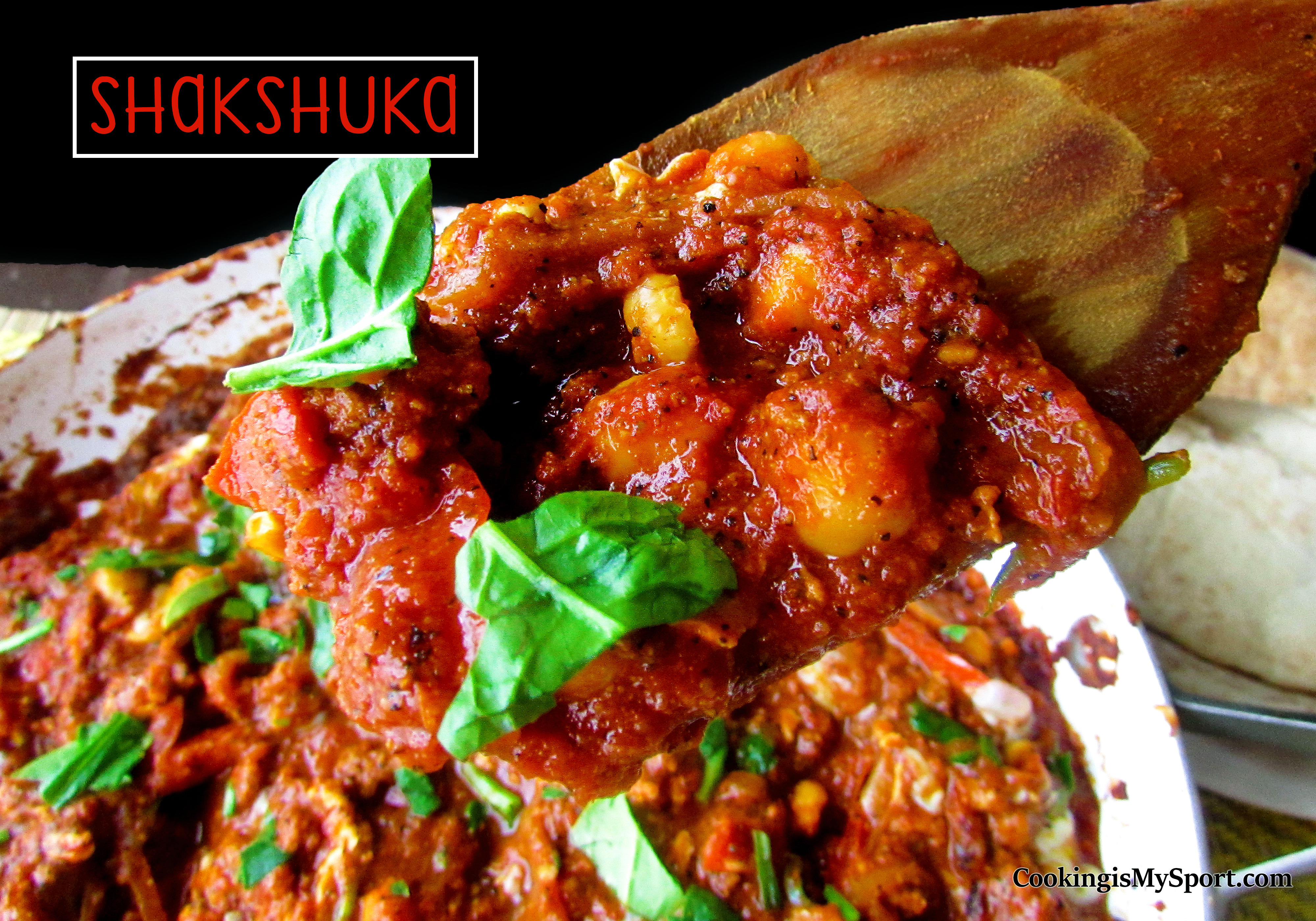 The second major addition I made to the recipe was a particular spice that I got introduced to a little while ago called ras el hanout. It’s a Moroccan spice blend that’s very smoky, slightly sweet, a little bit spicy, and extremely delicious. It’s often used in curries or in rice/couscous, but I thought that it would work pretty well to liven up that acidic and potentially flat tomato flavor of the shakshuka sauce. I was right. For my American friends, you can find a pouch of the ras el hanout at World Market for a very inexpensive price. If there are any Middle Eastern markets in your area then they’ll most likely have some there too. You can of course find it on Amazon too. However, if you’d rather do without, that’s fine: just substitute it with additional cumin. 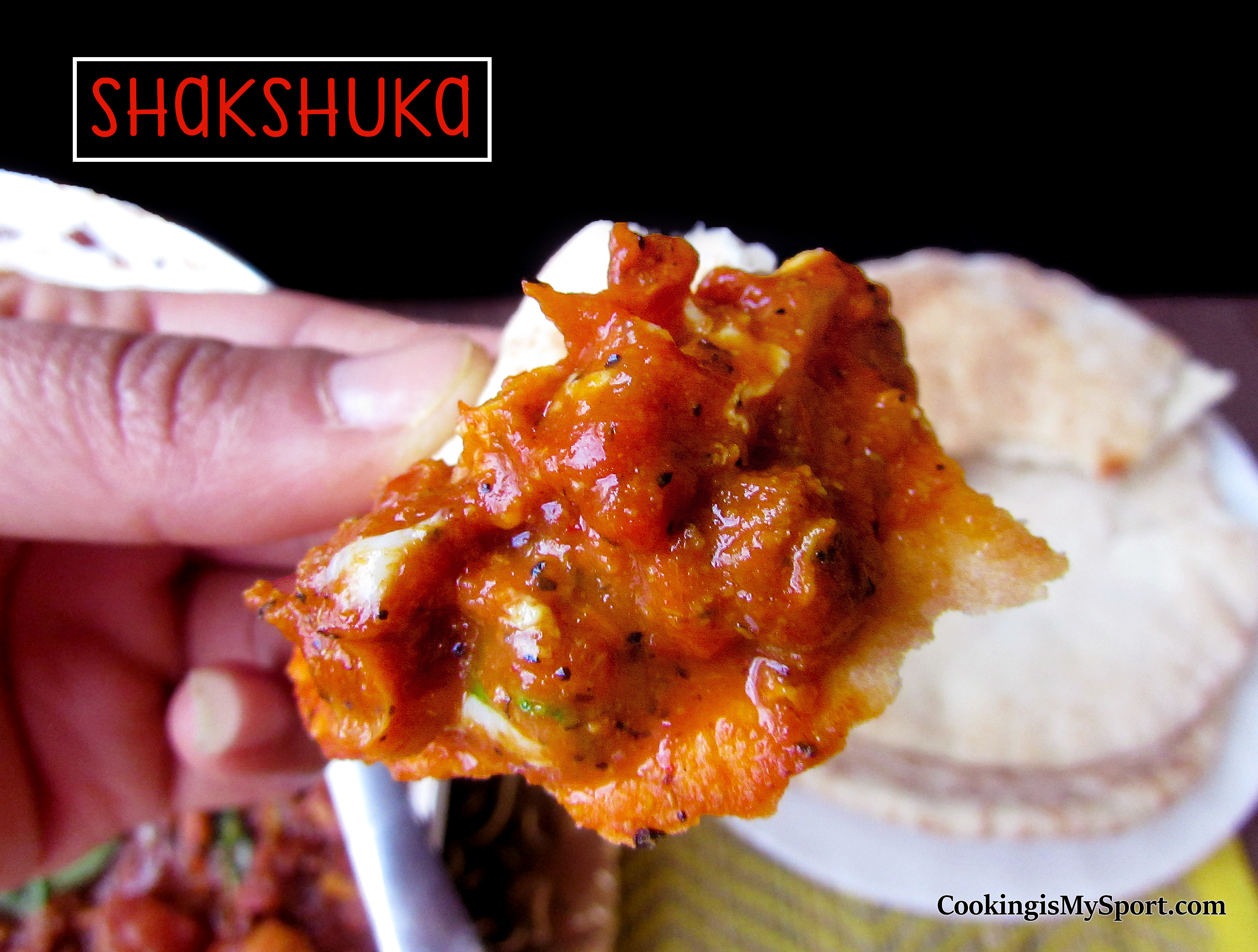 After you give the sauce time to cook down, it becomes robust and slightly thick with the added body from the meat and veggies. The flavors are really outstanding. You’ve got the acidity from the tomato, the smoky punch of flavor from the ras el hanout/cumin/paprika, the slight sweetness from the honey and the added flavor that the meat itself gives to it. You’ll kinda feel a little indulgent adding the eggs to finish the dish off, but who cares? I sure didn’t. Cook them until just set, then feel freed to spread and drag that runny yolk all through the sauce.

I got myself a short stack of sturdy pita bread and ate this dish entirely with my hands, using the bread as a spoon to dip and scoop up every single bit of the meaty/eggy sauce. And yes; I absolutely did use it to scrape the last bits up off the bottom until I’d pretty much wiped the bottom clean. Do.not.judge.me.

I hope you guys at Fiesta Friday #153 are hungry. I brought some Shakshuka and pita to share. Thanks to this week’s cohosts, Quinn @ Dad What’s 4 Dinner and Monika @ Everyday Healthy Recipes.

Heat the canola oil in a large cast iron or non-stick skillet that’s around 2 inches deep. Add the red bell pepper and saute until softened and pepper begins to get limp, around 3-5 minutes. Add the onions and stir together with pepper until both soften and become slightly charred.

Add the garlic and continue to cook until fragrant about 1 minute more.

Add in the tomato paste,  ras el hanout, cumin, and smoked paprika. Allow to cook for about 2 to 3 more minutes until the spices release their fragrance, stirring frequently.

Add the crushed tomatoes, honey, bay leaves and salt and pepper. Bring to a boil, then reduce heat to just barely a simmer. Stir in the meat, if using. Allow to cook for about 15-20 more minutes until flavors have blended and sauce has begun to reduce/thicken. Taste and adjust seasoning with salt & pepper if needed. (If sauce becomes too thick, you can always add about 1/2 cup of water and stir to loosen)

Using a spoon, make small wells in the sauce around the perimeter of the skillet. Carefully crack eggs into the wells, spooning some of the sauce onto the whites and sprinkling some salt & pepper onto the eggs. Cover the skillet, reduce heat to lowest setting and allow to cook until eggs have cooked— whites just barely set and yolks have begun to firm—about 5-8 minutes.

Sprinkle sauce with the spinach and serve with the pita for dipping.