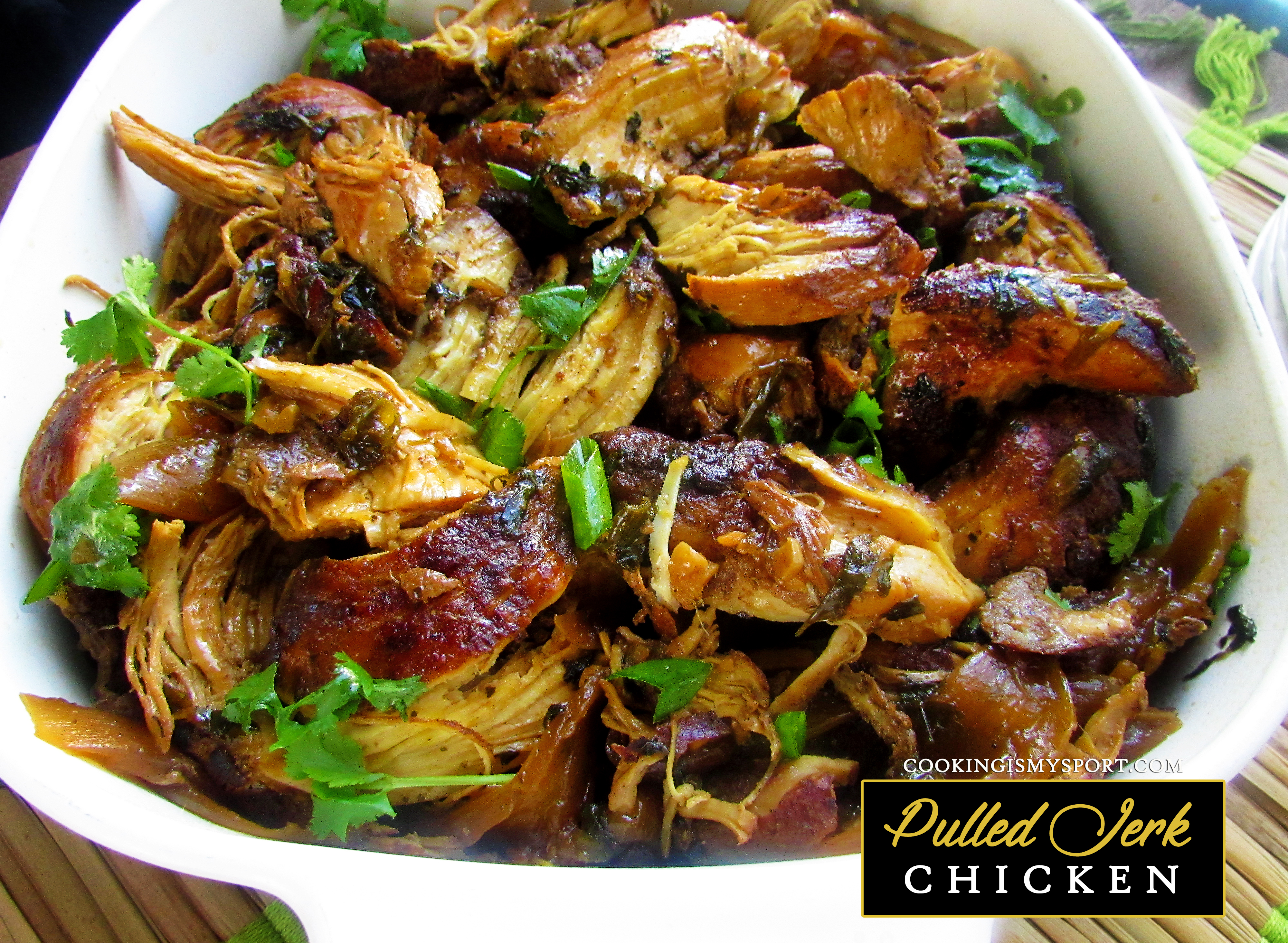 I cook often, but my actual taste preferences are limited. I like what I like and because of that, I don’t tend to try a lot of new things. There are few things that can kill my mood than a meal that I didn’t like. So I don’t take the risk. However, if someone I trust recommends something new to me, I’ll give it a shot, which is what happened for my birthday back in 2016. My sister took me to a Caribbean spot downtown and I had jerk chicken for the first time. There were greens and plantains on the side. It was delicious. 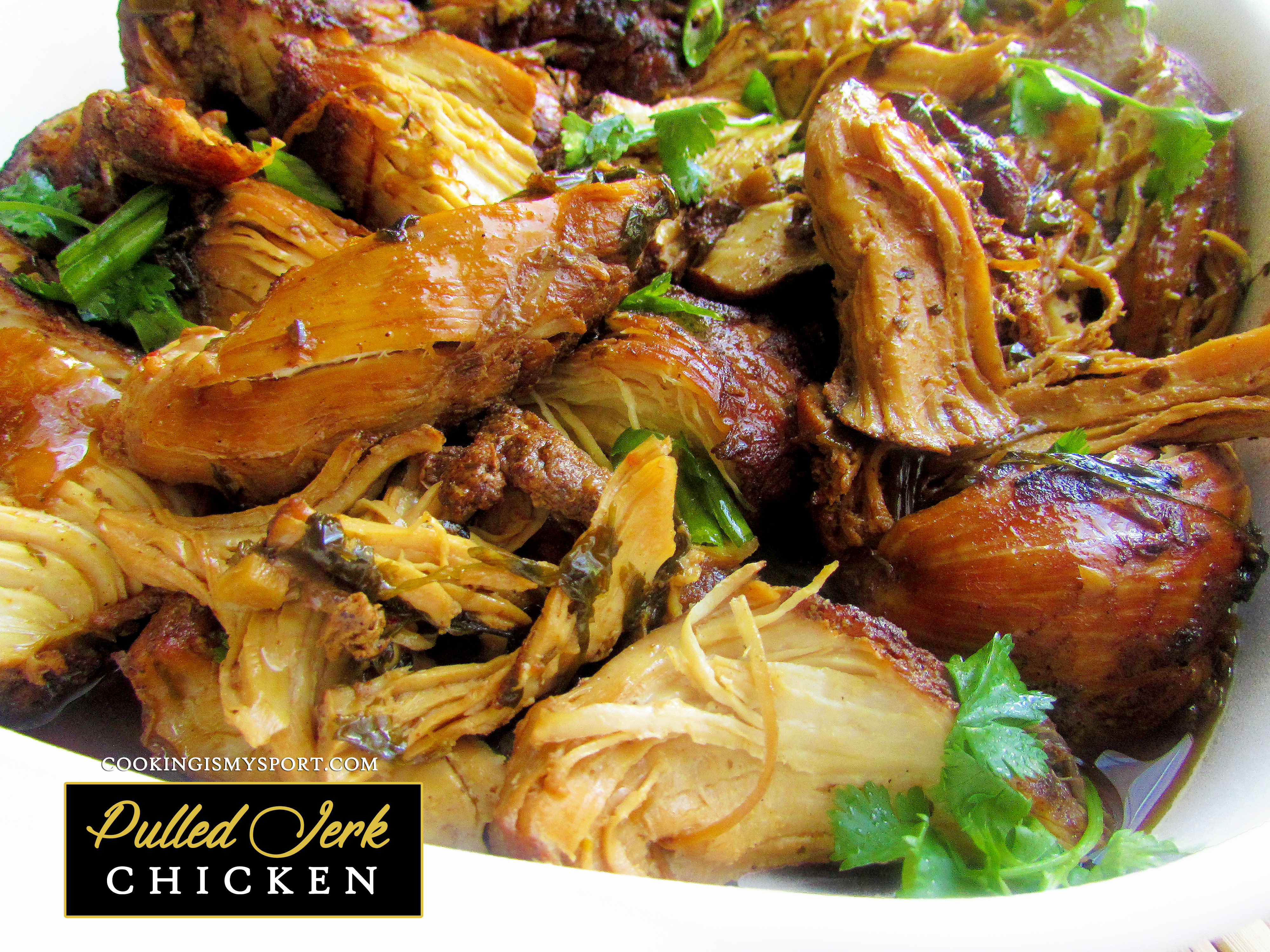 We try not to eat out too often to save money, but recently I found myself still really wanting some jerk chicken. I did a quick internet search to see what goes into making it and found out it’s really not that complicated. And as chicken itself is one of the cheaper proteins, I decided to give it my best shot. This is what ended up happening and I thought it turned out well enough to share with y’all. 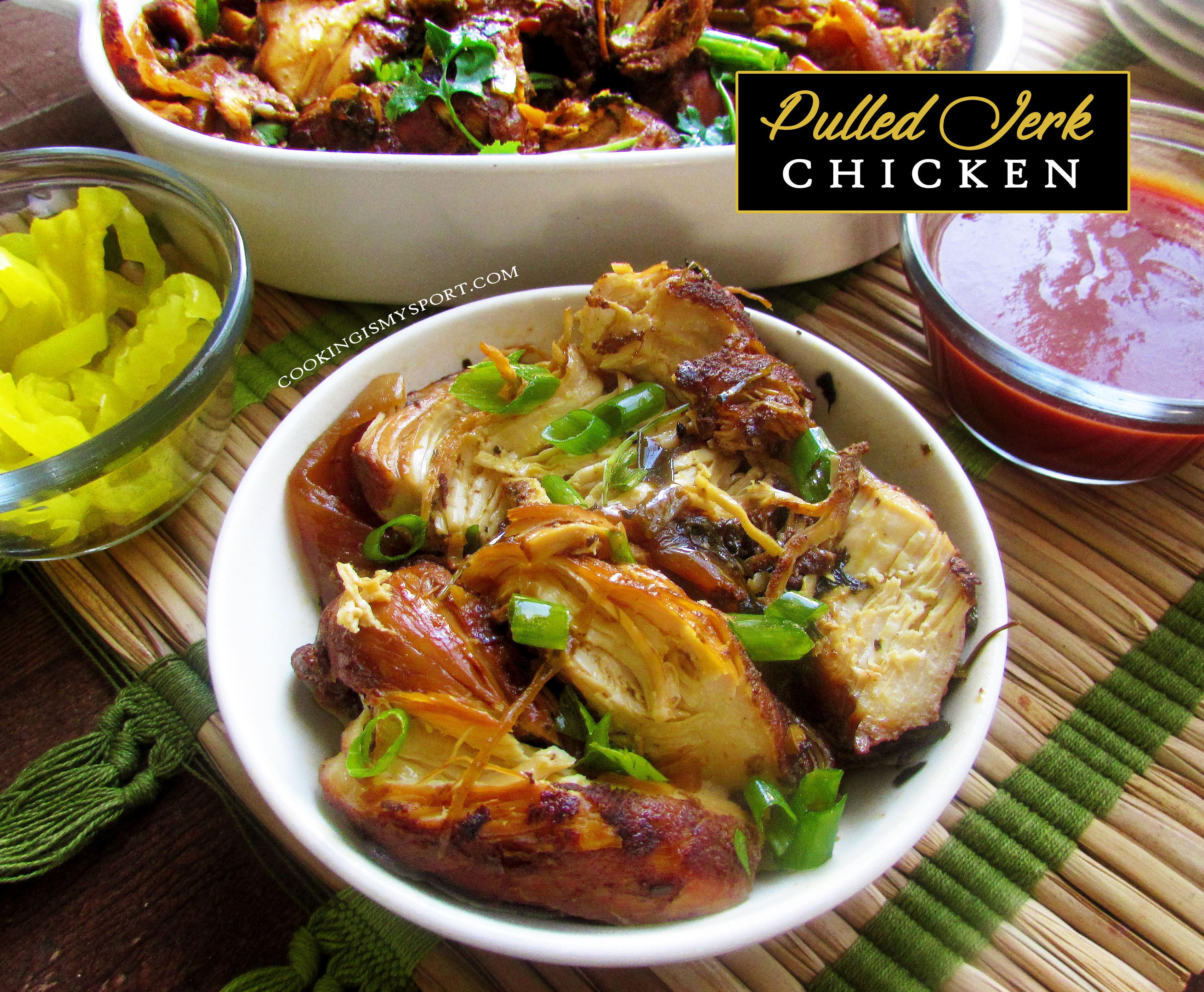 I really believe in letting my meats sit in marinades overnight, even if it’s mainly just a spice rub. It gives the spices plenty of time to permeate the meat and maximizes the amount of flavor you’ll get the next day–and also minimizes the amount of extra seasoning you’ll have to add the next day of cooking. For this spice rub, I used a combination of cinnamon, cumin and allspice, along with soy sauce that I rubbed into the meat to help it stick (it also gives a great ‘rich’ salty flavor). 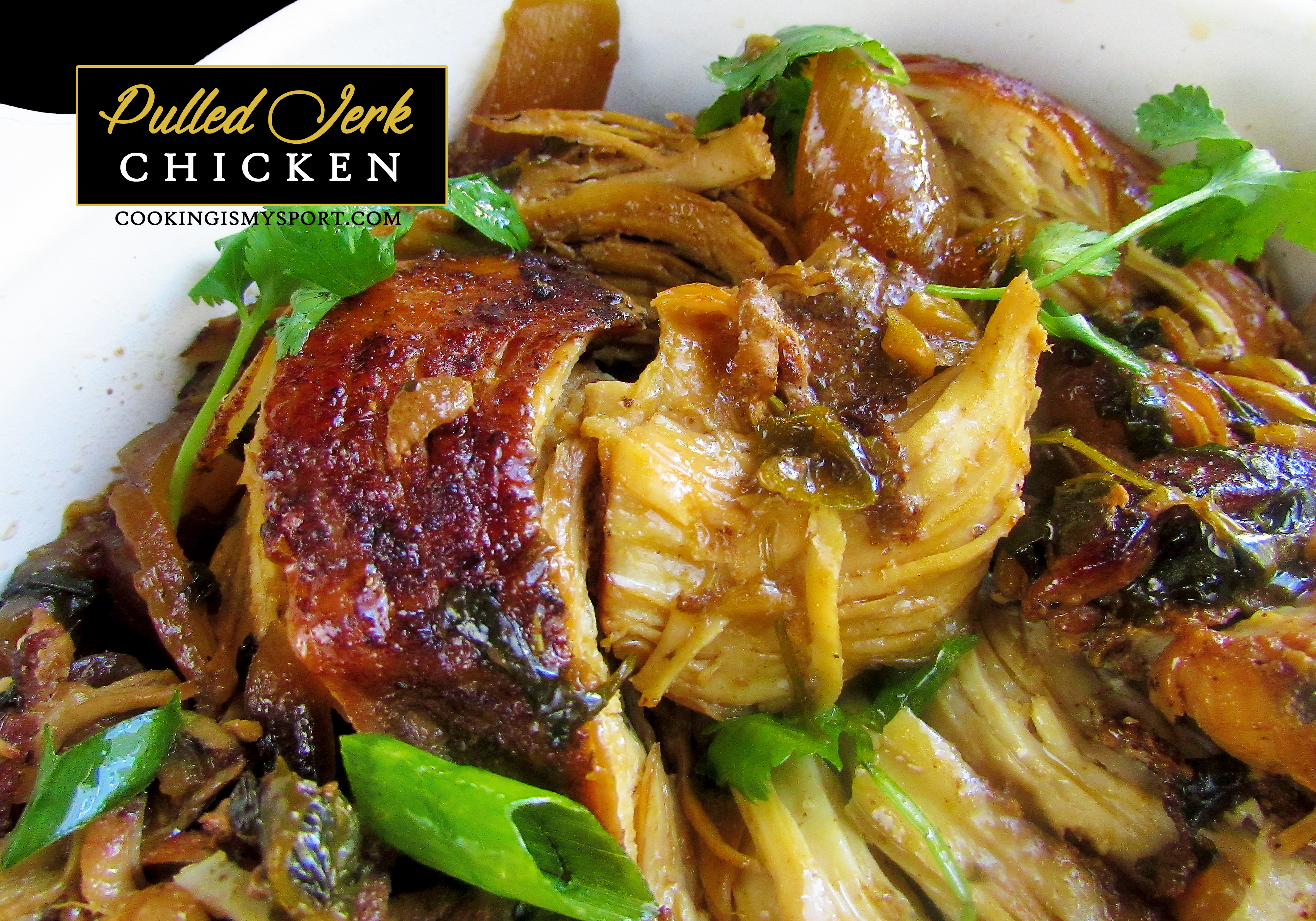 After the chicken gets seared, you’re gonna put together the sauce–and I really do love this sauce. I did some tweaking from other jerk recipes I’ve seen, swapping out lemon juice for lime, cutting out the vinegar (as I think the lime juice makes it plenty acidic enough) and adding some brown sugar and chicken broth just to round things out. Altogether, along with those Scotch bonnets, it makes a sweet and spicy sauce for the seared chicken to braise in the oven with until it’s fork tender and falling off the bone. This is also another one of those braises that tastes even better the next day as the flavors have even more time to develop and deepen. For a perfect Caribbean meal, make it with these Maple Curry Plantains alongside rice and crusty bread.

Sharing at this week’s Fiesta Friday #225, co-hosted this week by Antonia @ Zoale.com.

Combine the cinnamon, cumin and allspice together in a bowl with a fork. Massage a few dashes of soy sauce into the surface of the chicken (not the 1/3 cup, that’s for later), then rub the spice mixture into the meat. Place the meat into sealable gallon size bag, seal it, then toss the meat around in the bag to make sure the seasoning is evenly coated. Refrigerate overnight.

Preheat oven to 350F. Heat a few tablespoons of oil in the bottom of  Dutch oven over high heat. Sear the chicken on both sides about 2-3 minutes per side until browned. Remove from pot once browned and keep covered with foil. Deglaze the pan with about 1 cup of the chicken broth, scraping up the brown bits. Allow to simmer until liquid is mostly cooked off, then place the onions in the pot. Allow to cook until they’re translucent and softened, 5-7 minutes, then add the garlic and cook until fragrant, about 1-2 minutes more.

Add the lime juice, molasses, orange juice, the 1/3 cup of soy sauce, peppercorns, brown sugar, scallions, cilantro, thyme, ginger, remaining 1 cup of broth and peppers. Bring to a boil, then reduce heat and bring to a simmer, allowing to cook for about 5-7 more minutes. Taste and adjust for seasoning.

Add the chicken back to the pot. Cover tightly and place in the oven, bake until meat is fork tender and pulling off the bone, about 1 1/2-2 hours. When the chicken is ready, remove it to a cutting board.  Strain the sauce through a fine-mesh strainer, and pour it back into the pot. Pull the meat off the bones and discard them along with the fatty parts and skin. Place the meat back into the pot and toss in the sauce.

Serve with rice or on crusty sandwich bread. 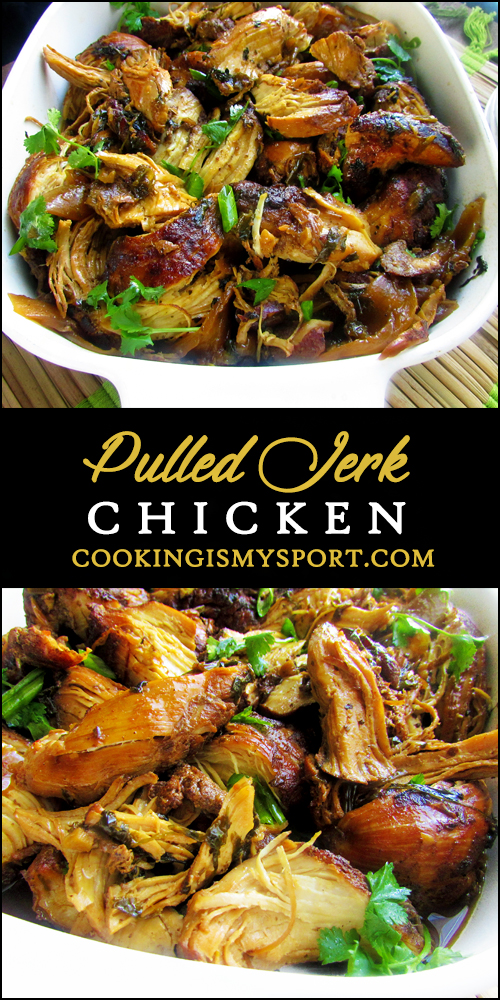