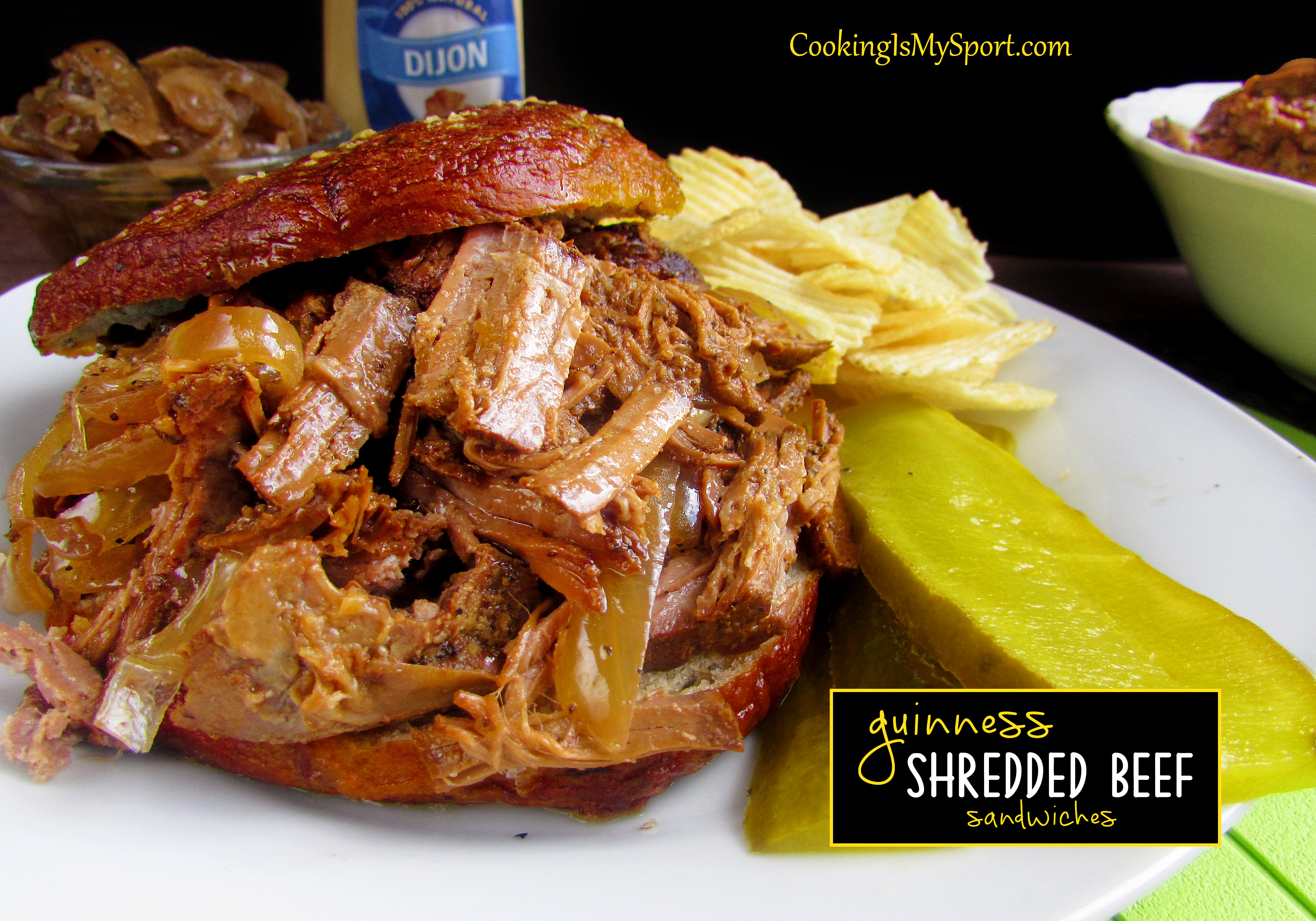 We don’t have to talk too much about what happened this week. It happened. To say I’m upset would be the understatement of the century. This is a terrible, embarrassing, and frankly shameful turn of events for my country. I won’t personally apologize for it (I voted for the right person for the job), but it still shouldn’t have happened. It should not be. I am both dismayed and terrified for the future of America and the many groups of people who had so much at stake in this election. The future as far as I can see, looks very bleak. Yet here we are.

(Don’t debate me in the comments section. Don’t tell me not to panic and that everything is somehow going to be ok. I’m an African American woman and what happened this week drastically & negatively affects my livelihood and the livelihood of millions of other Americans in my country. I’m not going to be PC about that. If you’re offended or take issue with any of the above, then you can feel free to unfollow this blog with all quickness. I legitimately could not care less.) 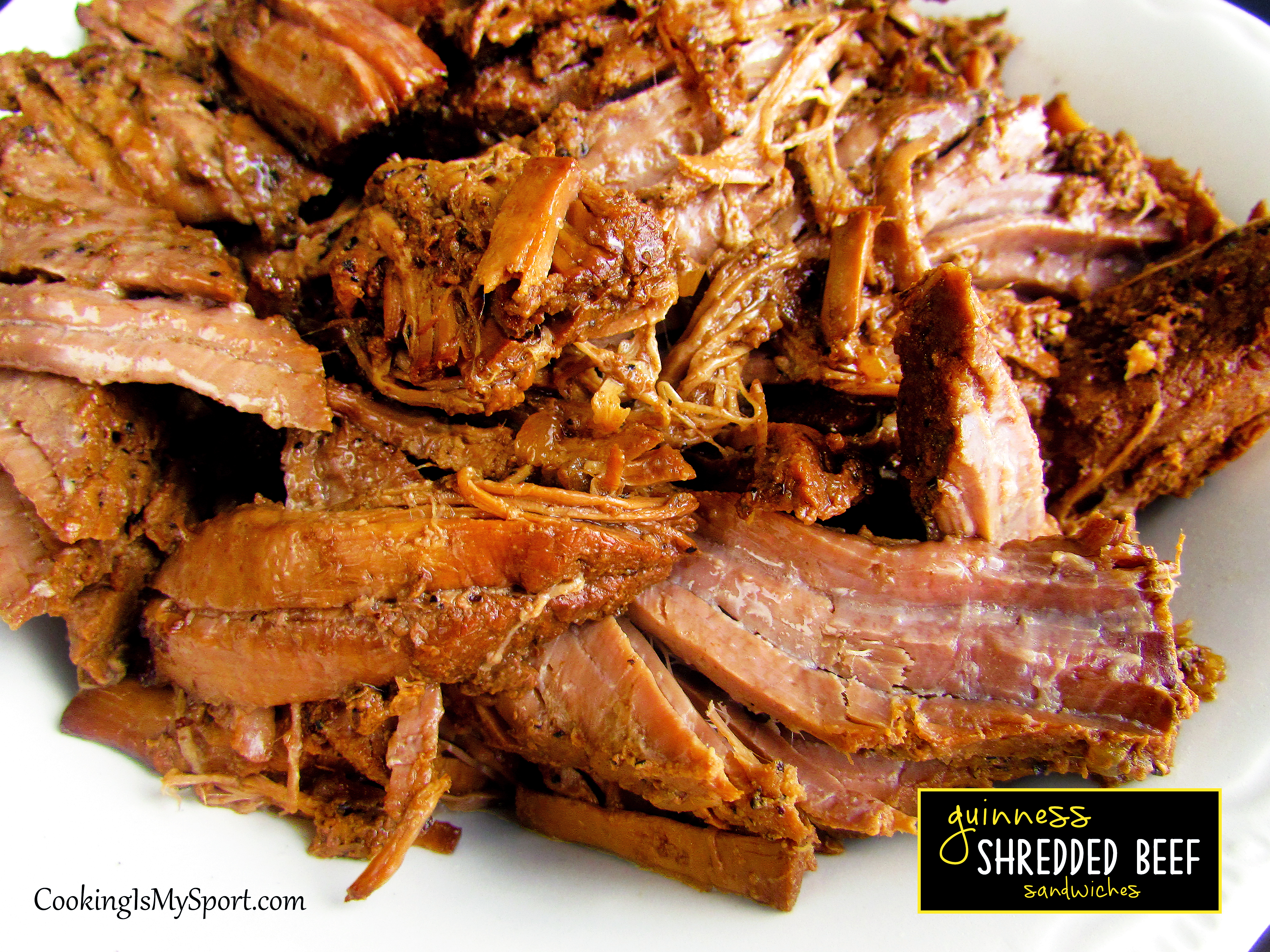 However, seeing as we’re all just here for the food anyway let’s focus on that far more pleasant subject instead.  After this week I’m in desperate need of a pick-up. A HUGE pick up.

Cooking is not just my sport, it’s one of my chief ways of practicing self-care; a way I can inject some peace & calm into my life when I’m stressed out. When I know that I’m cooking good food, it puts me in a good mood. Eating that good food then puts me in a great one. 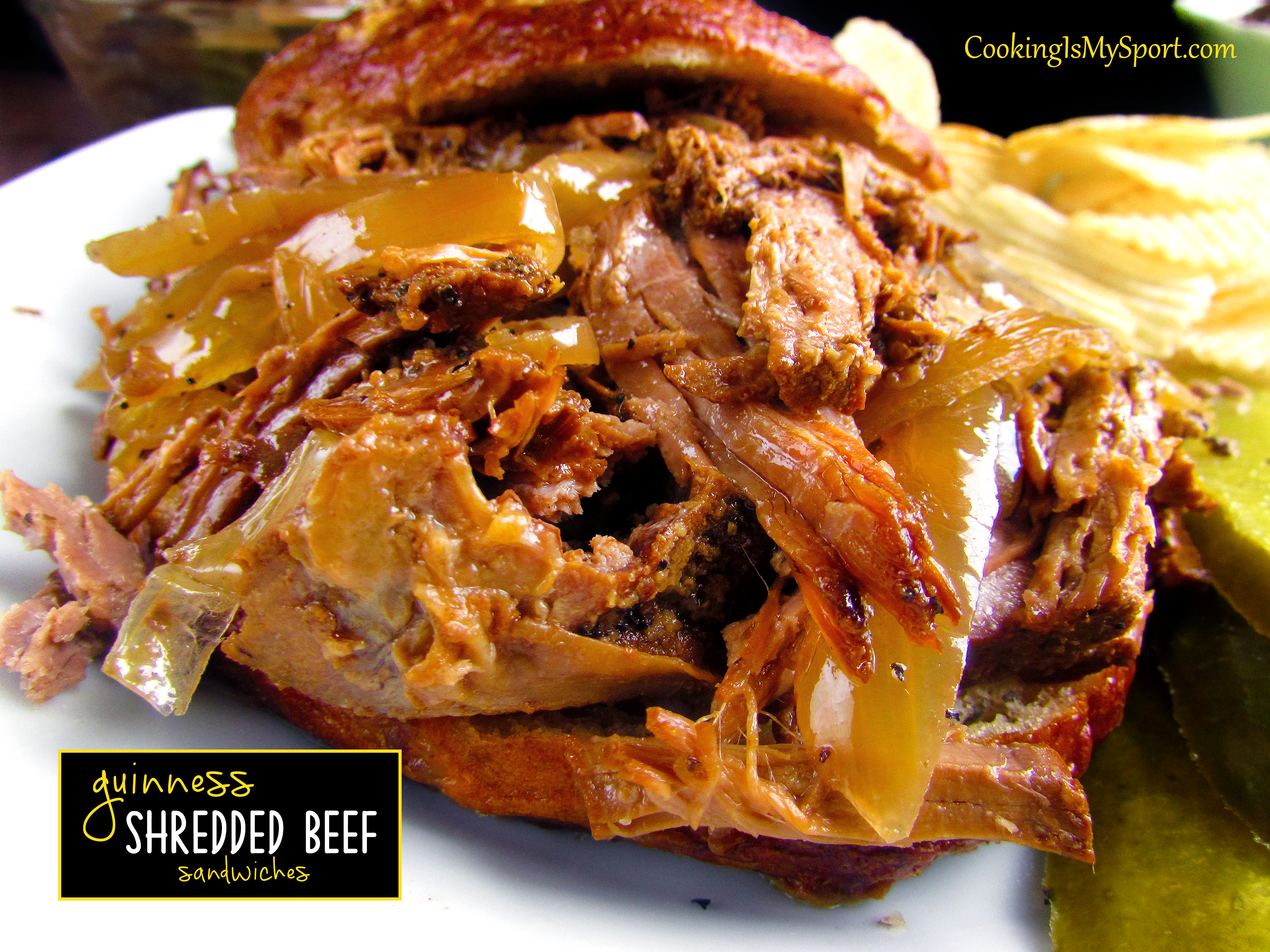 Today’s recipe is one of those dishes that instantly put me into a better mood, just by existing. The best part about it is, it’s actually a pretty low maintenance & low effort meal, especially if you use a slow cooker.

You guys know that I’m usually a poultry girl. Chicken breast is my mainstay and the protein nine times out of ten, I’m gonna want. However, sometimes I get a craving and suddenly nothing but red meat will do it for me. 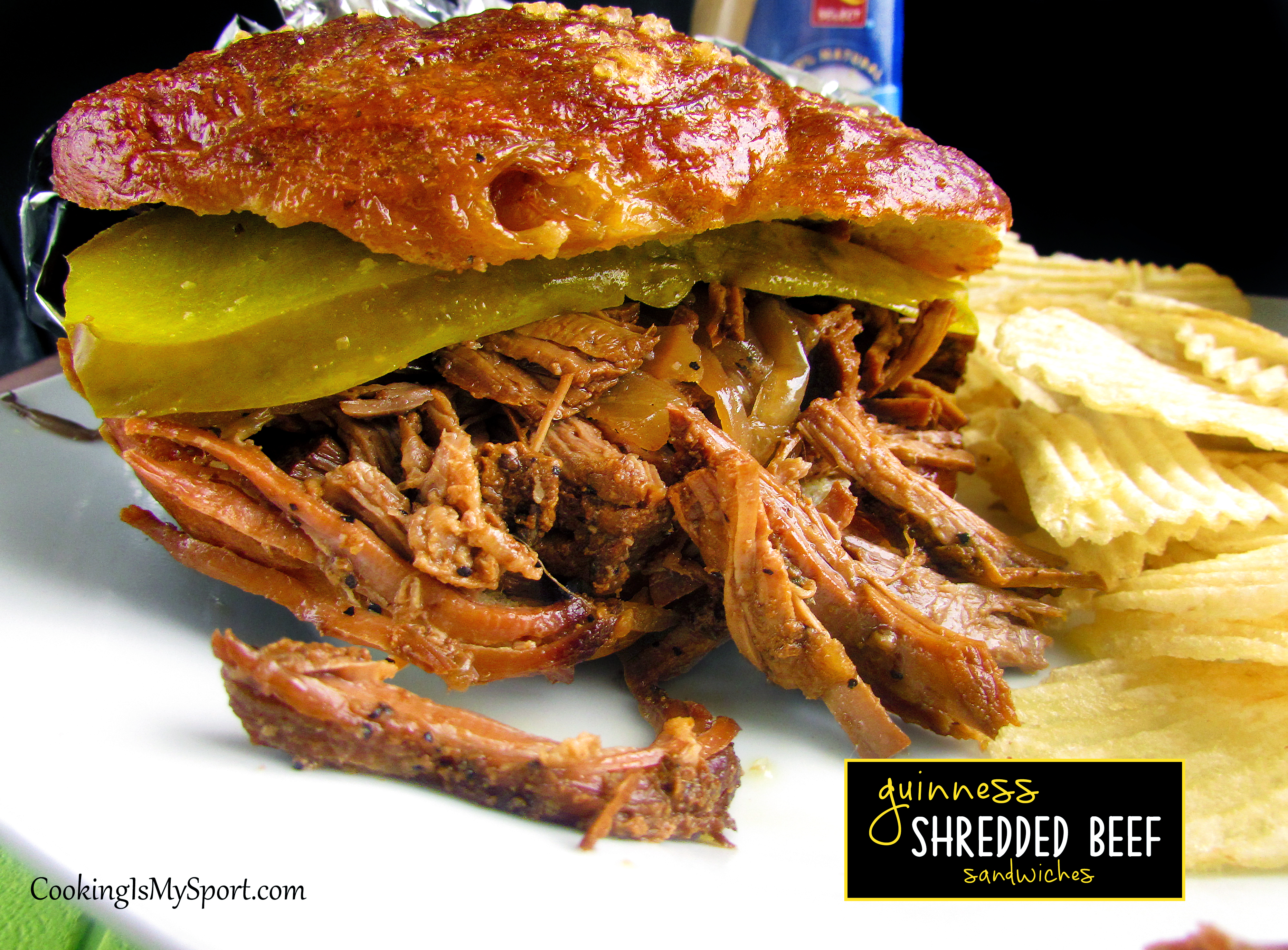 When I get a hankering for red meat, I don’t want a fancy steak. I’ve gotta have a sandwich. Either a big juicy burger, or…one of these. A ginormous shredded/pulled beef sandwich.

Guys, I just….looking at pictures of this is making me miss eating this thing already. It’s so good. What’s more, I’m going to go ahead and say that this another one of those recipes that is EXTREMELY difficult to mess up, even if cooking isn’t really your ‘thing’. 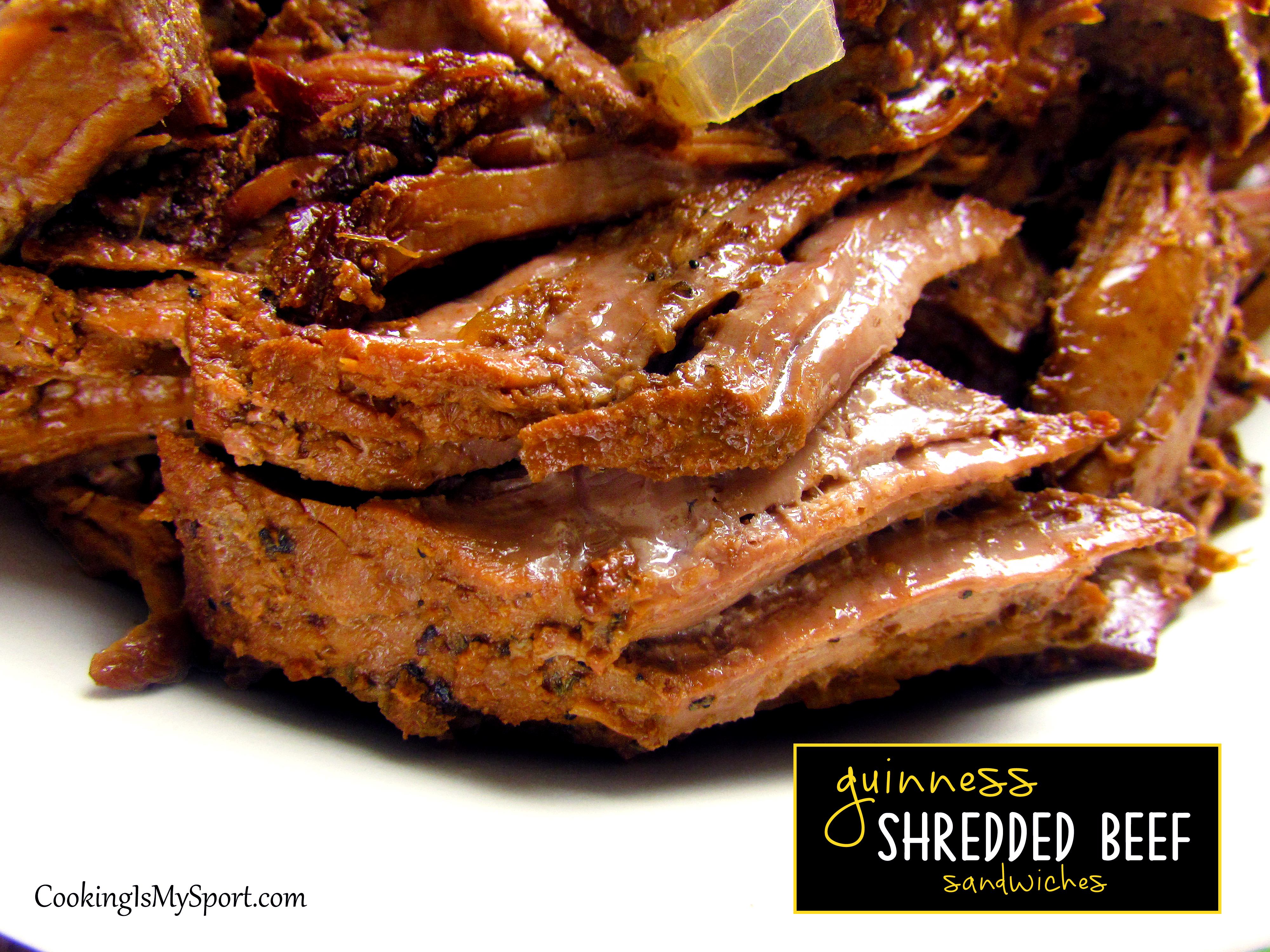 I’m really not fond of beer as a beverage. I think it tastes like piss would if I actually knew what piss tastes like-which I don’t, but y’know…moving on. However, taste-wise I’ve found that beer can it can do some pretty amazing things to a piece of meat and for those purposes, I use it often in my cooking. When combined with the other simple ingredients in the marinade, this makes for a savory, garlicky and juuuuust slightly tangy flavor that gets infused in the meat overnight, then is cooked in the slow cooker (or the oven if you don’t have or want to use one of those). 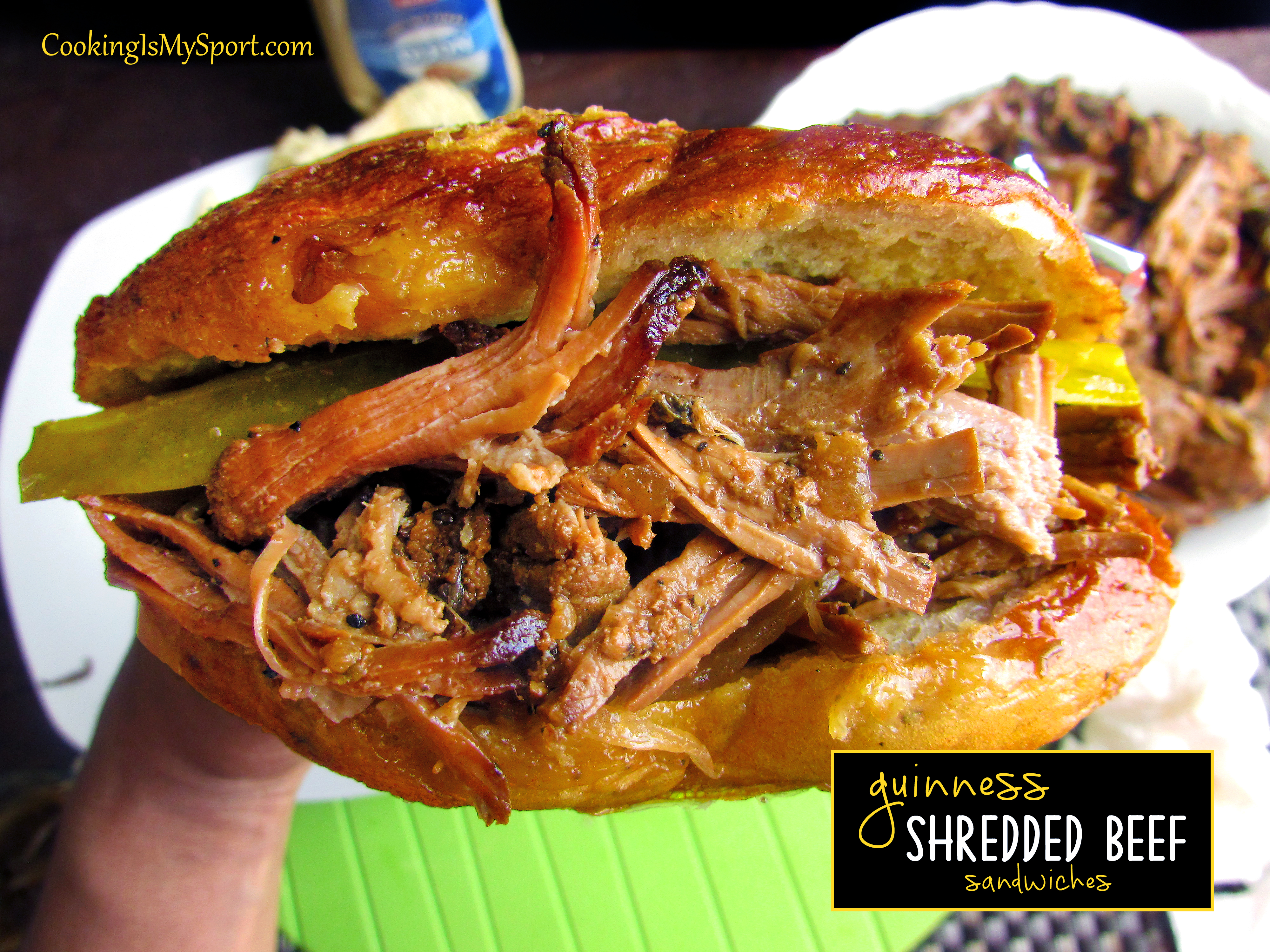 Pricking the meat all over before searing/cooking will make it more tender, so don’t skip that step. Going the low and slow route will make sure it isn’t tough and dry, so try not to rush this process by going “High” mode on the slow cooker or a higher temperature in the oven. Be patient. You’ll be rewarded for it in the end.

I made this recipe alongside the Fool-Proof Slow Cooker Caramelized Onions that I posted last week and built myself the sandwich of my dreams. When I tell you that it put a smile on my face…whew. I was a happy camper for dinner that night and you can bet your behind that every scrap of this delectable meat that you see here is long gone.

Do yourself a solid and make some of this. You’ll feel better. Promise.

Using a fork, prick the meat all over on both sides evenly.

In a medium bowl , whisk together the stout beer, soy sauce, , molasses, Worcestershire sauce, minced garlic, and onion soup. Set aside about 1 1/2 cups of the marinade for later use (refrigerate it).

Place the beef in a spill-proof gallon size plastic bag. Pour the remaining marinade over the beef and seal the bag. Refrigerate for a minimum of 4 hours, preferably overnight.

Set a Dutch oven over high heat with a thin coating of vegetable oil in the bottom.  Spray the bottom of a slow cooker with cooking spray or place a slow cooker liner on the inside of it.

Remove the beef from the marinade then rub the salt, black pepper and onion powder over it. Then, place in the Dutch oven. Sear on both sides until it has a good browning , about 3-5 minutes per side.*

Place the roast in the slow cooker with the onion and green pepper sprinkled on both the top and bottom. Pour in enough of the reserved 1 1/2 cups marinade to come up halfway on the beef. Discard the rest.

Using a fork gently pull at the meat. It should fall apart and shred easily. Assemble onto sandwiches with Dijon mustard and pickles and other preferred toppings/condiments.

*If you do not have a slow cooker, or want to cut down on the cooking time, this recipe can also be done by roasting in the oven. Preheat your oven to 275 degrees Fahrenheit. After the beef has finished searing, add the onion and bell pepper to the Dutch oven, as well as the reserved marinade. You can also use regular beef broth; (enough to make sure it won’t dry out or burn). Cover and roast for about 5-6 hours.