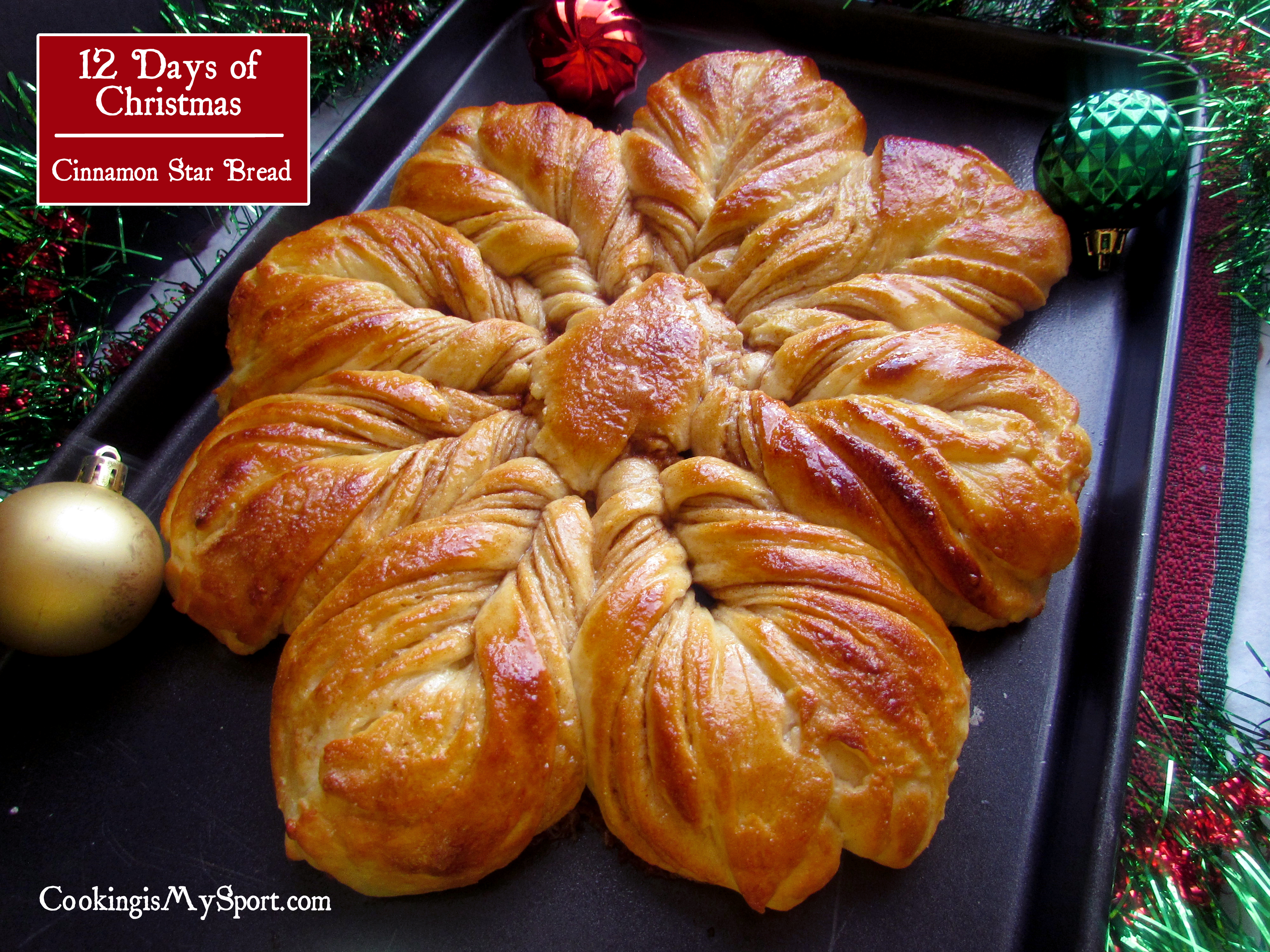 Hey guys.  So yeah… about this.

This is bread. Just cinnamon, sugar and bread. That’s it.

I know right? I’m not even going to make an attempt at humility with this one. Quite frankly, this is pretty awesome and I feel kinda awesome myself for having actually made it. I was excited after the second proof before the thing even went in the oven: it was already just so darn pretty. 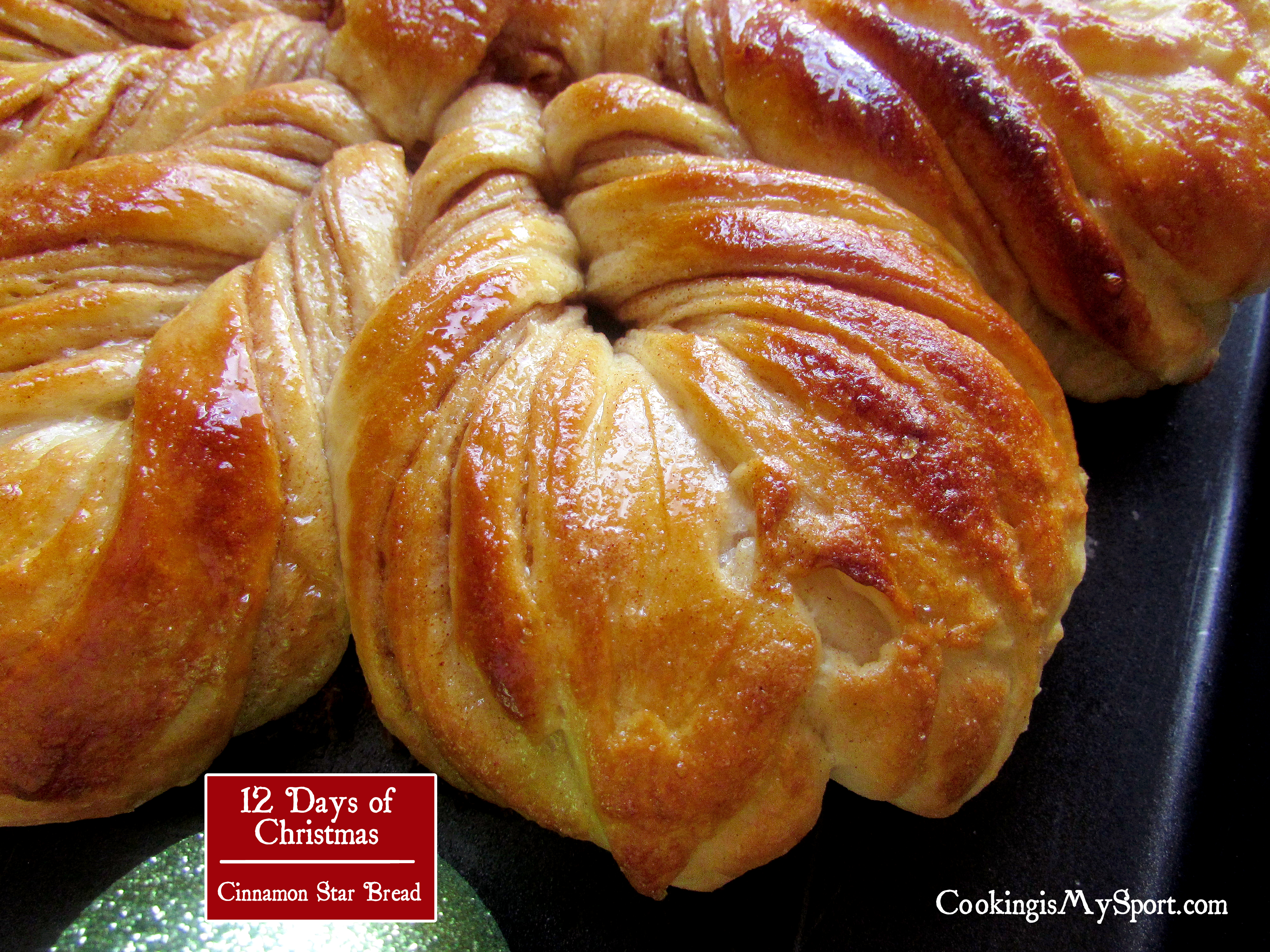 I’ve spoken before about my love for the Great British Bake Off/Baking Show. If you’re a fan of cooking & baking in general then I assume you’ve already seen it yourself–if not, you should as it’s a great show. In every episode there is a Show-stopper round, where the contestants have to take the subject of the week and use it to create a ‘showstopping’ work of art that is every bit as delicious to look at as it is to eat.

Rest assured, I will most certainly not be competing on a baking show at any point in time–however if strictly hypothetically speaking I did happen to compete on Bake Off, this Christmas star would almost DEFINITELY be my centerpiece for the showstopper round of Bread week. 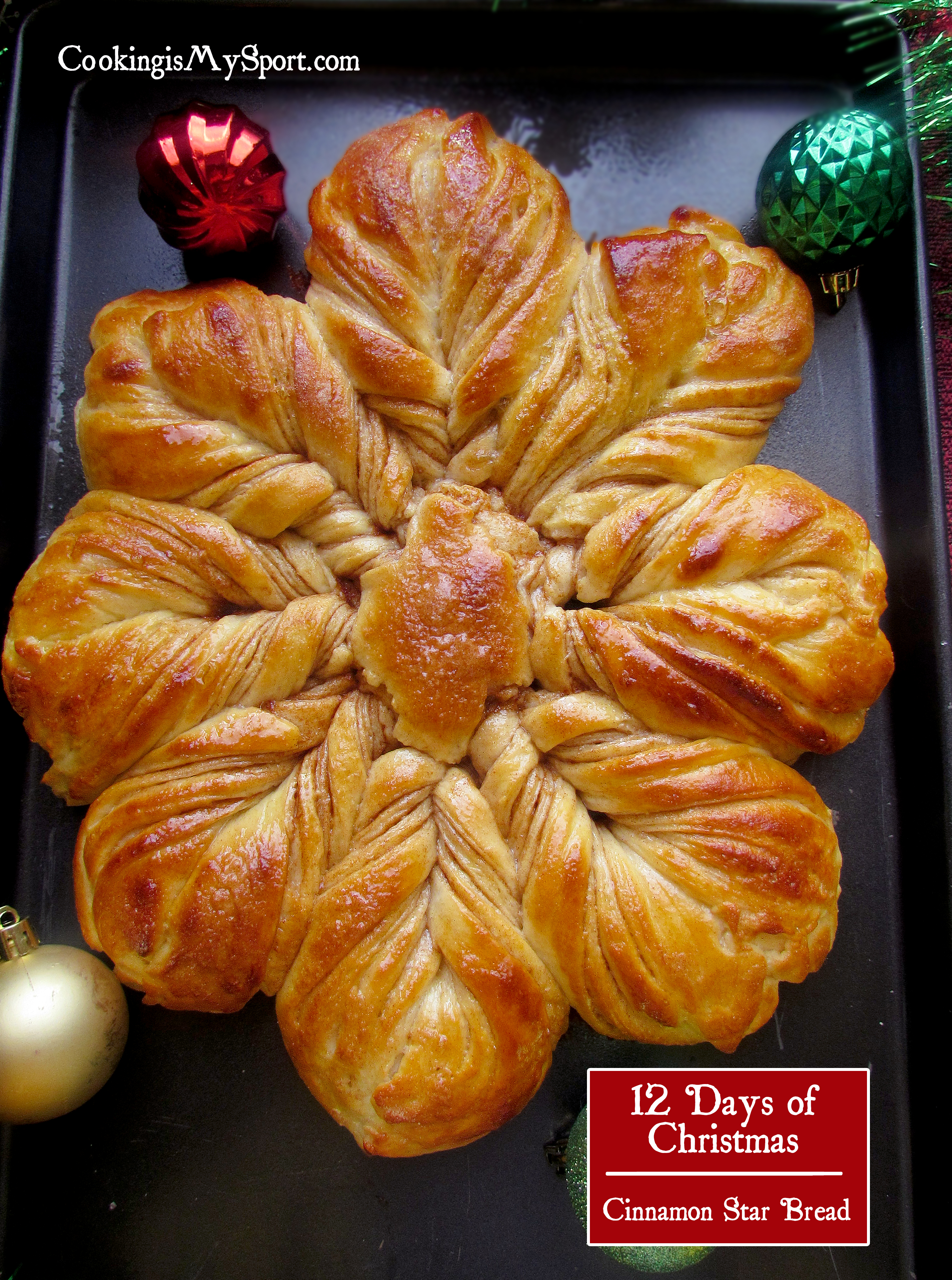 Number one: it’s GORGEOUS. Probably one of the prettiest things I’ve ever baked. Number two, it’s also deceptively simple to put together. No, but seriously: IT IS. I didn’t believe it at first glance either, but after reading the step-by-step illustrated walk-through on the King Arthur Flour website, I knew that this was something I could at least try to pull off for myself.

Plus, I couldn’t think of a better occasion for it than the 12 Days of Christmas series. 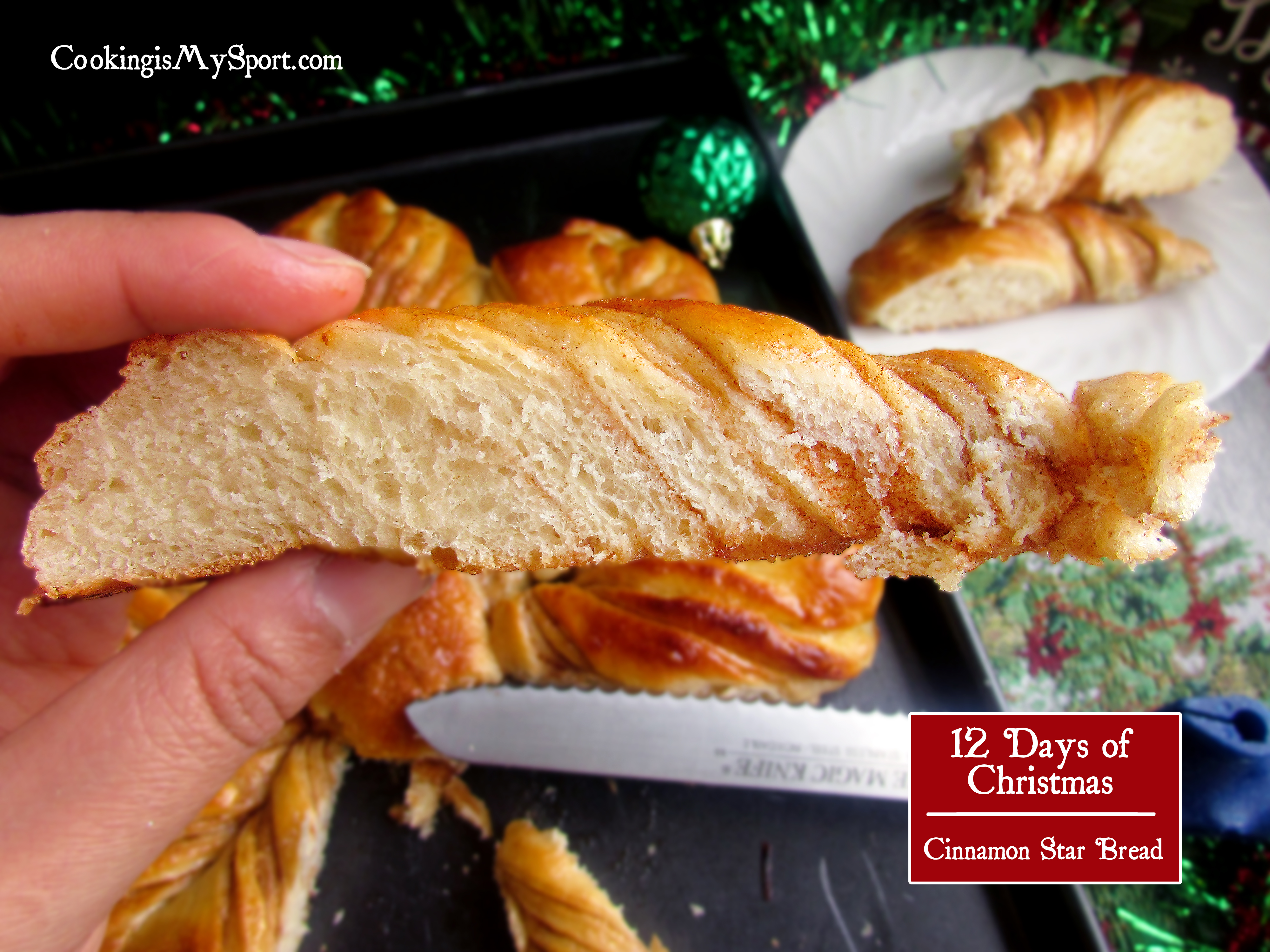 I almost didn’t want to cut into this at all, but you guys should know that the recipe yields beautiful results both to look at and to eat. The bread bakes up soft and chewy and the cinnamon sugar gives it a subtle sweetness that makes it great for enjoying with coffee. I’m sure I also don’t have to point out the obvious; that if you were to take this into just about ANY breakroom, anywhere then it would most definitely disappear with all quickness. The twists on the star points make for easy tear-and-share portions and I assure you that there’s plenty to go around. 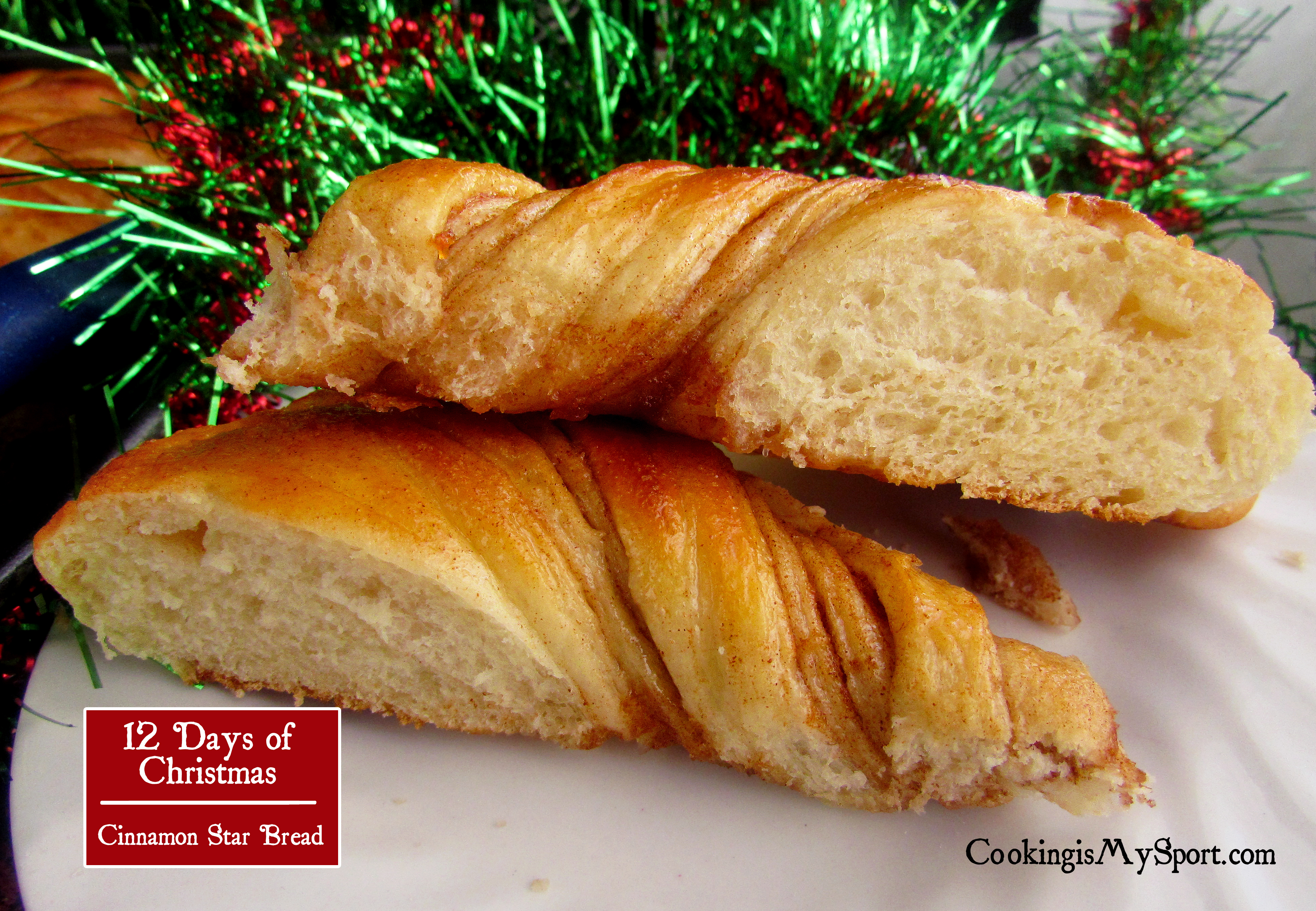 I decided to keep things simple for my first go-around with the bread, but now that I see how easy it is to put together my mind is already formulating new renditions to give this. The cinnamon sugar can easily be substituted for a blend of chocolate & nuts. A layer of fruit spread. Nu-friggin-tella. I could also even possibly see a savory twist given to this where it’s layered with cheese and herbs. The possibilities here are endless and the results for this just can’t be beat. Because I like to share, I’ll be sharing my Christmas star with all of us showing up to this week’s Fiesta Friday #151–where it’s pretty crowded already I see. The more the merrier.

Well. Here we are again. We’ve reached yet another end to the 12 Days of Christmas series. Thanks to all of you who followed along with me. Hopefully it stirred up the baking elf in you and gave some inspiration to whip up some Christmas cheer in your own kitchens. Just as I have every day, I’ll include the links to all of the recipes in this year’s series below. Feel free to check them out if you haven’t already done so.

Have a very VERY Happy Holiday, you guys. Bless up.

In the bowl of a standing mixer combine the water and yeast. Sprinkle the sugar on top. Allow to rest for about 10 minutes, until frothy.

Using the whisk attachment mix in the butter. Switch to the dough attachment and gradually fold in the flour mixture, kneading until a smooth dough forms, about 10-12 minutes. Place the dough in a greased bowl, cover with plastic wrap and a damp towel. Allow to rest for 1– 1 1/2 hours until doubled in size.

Cut dough into four equal pieces. Shape each piece into a ball, cover them and let rest ofr 15 minutes.

On a lightly floured work surface, roll out 1 piece of the dough into a 10 inch circle. Place this circle on a piece of parchment and brush with a thin coat of the beaten egg. Sprinkle about 1/3 of the cinnamon sugar mixture on top and use your fingers to lightly press into the dough, leaving 1/4 of the outer circle bare. Set the parchment nearby.

Take a second piece of the dough and repeat the process, placing on top of the completed cinnamon sugar disc. Repeat with the others, LEAVING THE TOP DISC BARE.

Place a 2 1/2″ to 3″ round cutter in the center of the dough circle as a guide. With a bench knife or sharp knife, cut the circle into 16 equal strips, from the cutter to the edge, through all the layers.

Using two hands, pick up two adjacent strips and twist them away from each other twice so that the top side is facing up again. Repeat with the remaining strips of dough so that you end up with eight pairs of strips.

Pinch the pairs of strips together to create a star-like shape with eight points. Remove the cutter.

Transfer the star on the parchment to a baking sheet. Cover the star and let it rise until it becomes noticeably puffy, about 45 minutes. While the star is rising, preheat the oven to 400°F.

Brush the star with a thin coat of the beaten egg. Bake it for 12 to 15 minutes, until it’s nicely golden with dark brown cinnamon streaks; the center should register 200°F on a digital thermometer. Remove the loaf from the oven and allow it to cool for about 10 minutes before serving.