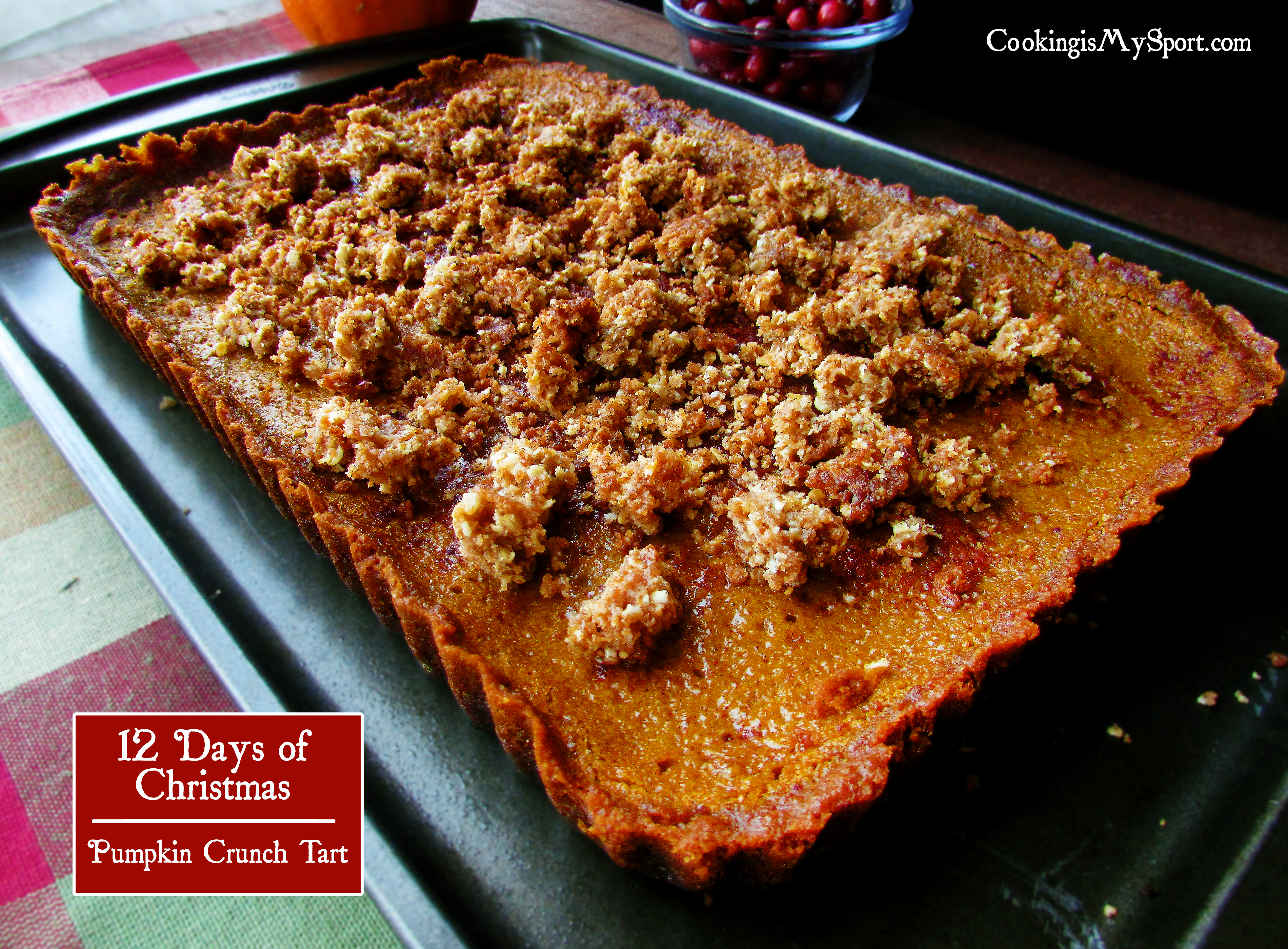 For the second day of our Christmas series, I thought I’d start out this post with a small confession: I had never once tried a pumpkin pie until one year ago, at Thanksgiving.

I dunno why exactly. It could be because our family has ALWAYS been sweet potato pie eaters and although the two aren’t the same, it is typically a kind of  thing that most between choose between rather than having both. Most pumpkin pie also has a different flavor profile than sweet potato pie;  not only does it have a different texture, the spices also tend to pack more of a punch. 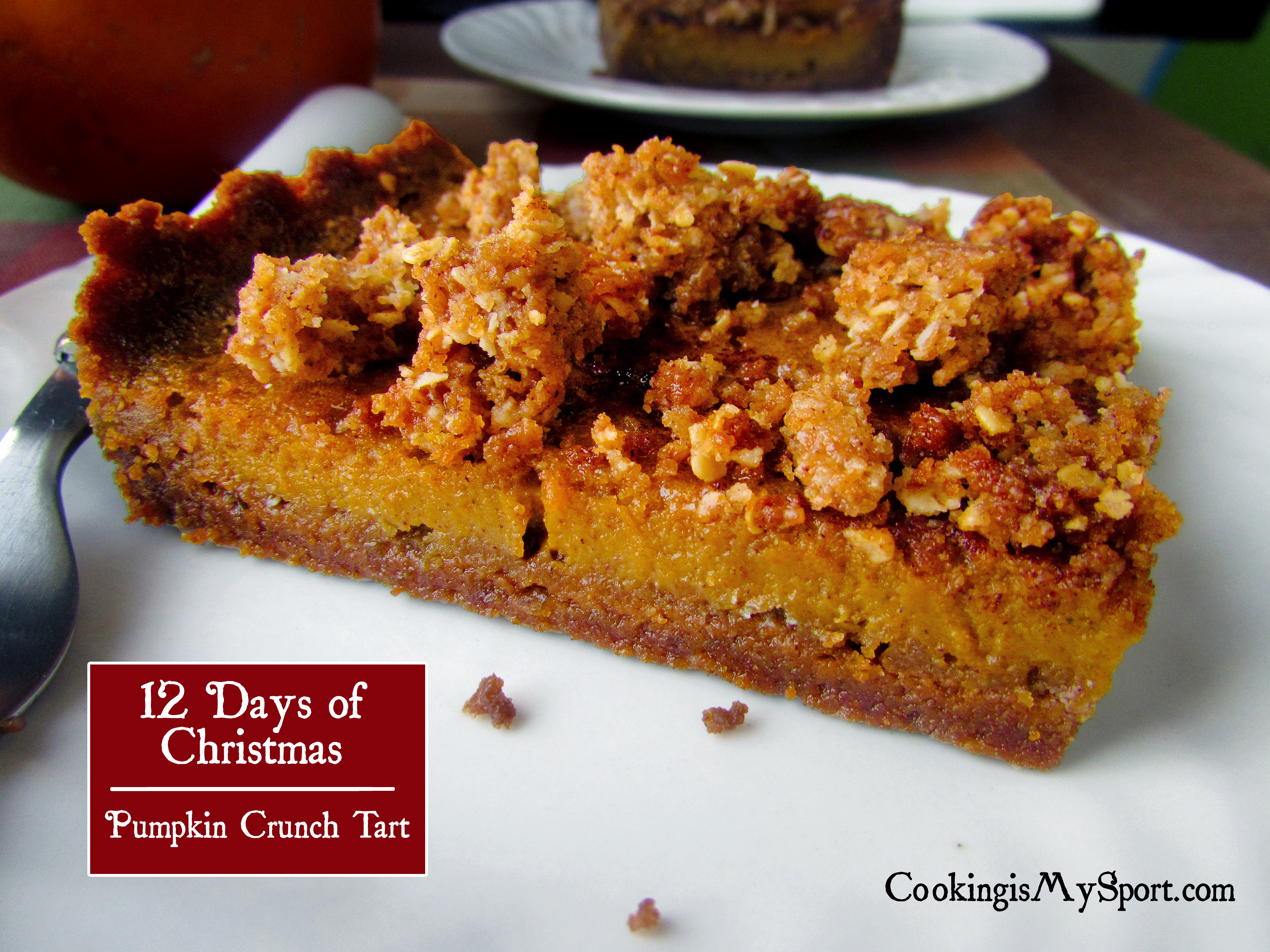 For a while, the latter was the reason that I never really tried or thought it was even worth my while to try pumpkin pie. For most of my life, I was used to the sweeter, less spicy flavor of my grandmother’s sweet potato pie. Although I’d been using pumpkin spice in other baked goods,  pumpkin pie remained the final frontier that I hadn’t tried. It’s not like I thought I would HATE it, I just had the ‘if it ain’t broke, don’t fix it’ mindset and stuck to my tried and true sweet potato pie.

This year however, I was feeling a bit more adventurous. 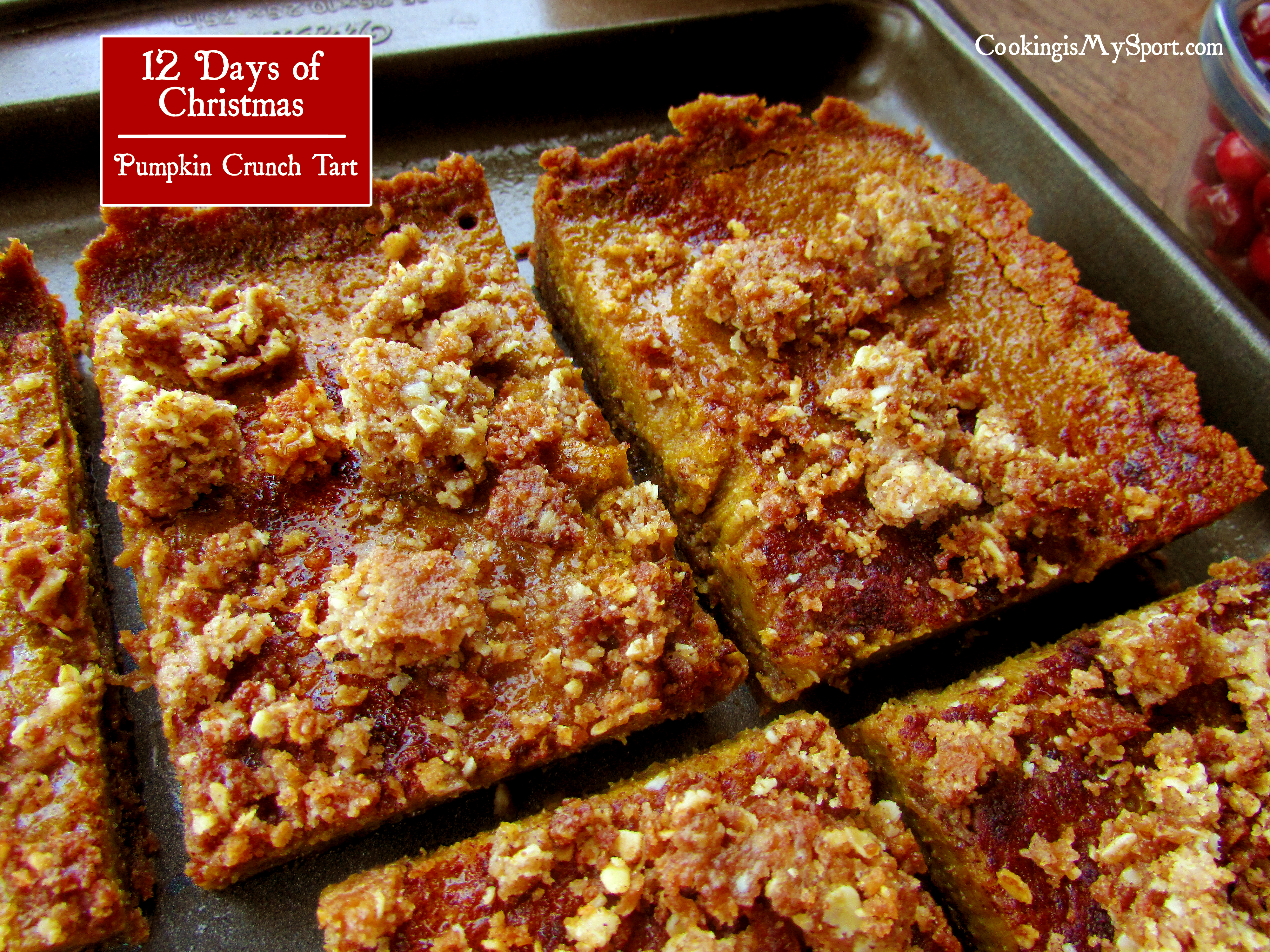 If I had to give one qualm I have with not only pumpkin pie, but (yes) even sweet potato pie and smooth custard/cream pies in general, it’s that they often lack a textural component to break up that ‘smoothness’ and not have it be so one note. I don’t really go for those super thick and high cream pies that make you bite through two inches of cream and still you’re not really end up ‘chewing’ anything. I could go for something crunchy or a least with a small amount of texture to contrast it. It’s really that idea of wanting to try pumpkin pie with texture that inspired this recipe. I found and used a pumpkin pie recipe that I trusted (Bobby Flay has never let me down yet) and modified it to suit my purposes.

Altogether this a SOLID dessert guys. The crust is an easy and far less labor intensive one than typical homemade pie crust and it will taste much better than a pre-made one you bought at a store. Use a good gingersnap though; one you would want to eat all on it’s own. If gingersnaps aren’t your thing, you can definitely use graham crackers too though. The filling is what I think a good pumpkin pie should be; there’s a good balance of deep caramel flavor from the molasses and brown sugar and spiciness of the seasoning. What’s more, letting it chill in the fridge overnight gives the spices enough time to really soak into the pumpkin puree so that the flavor is as pronounced as possible. I think the thing that makes this pie really special is the addition of the cinnamon crunch topping that gets sprinkled on top just before eating. It reminds me of a crunchy, spicy oatmeal cookie and it provides the perfect textural contrast that I think these kind of pies so desperately need so that you’re not eating soft and mushy on soft and mushy. 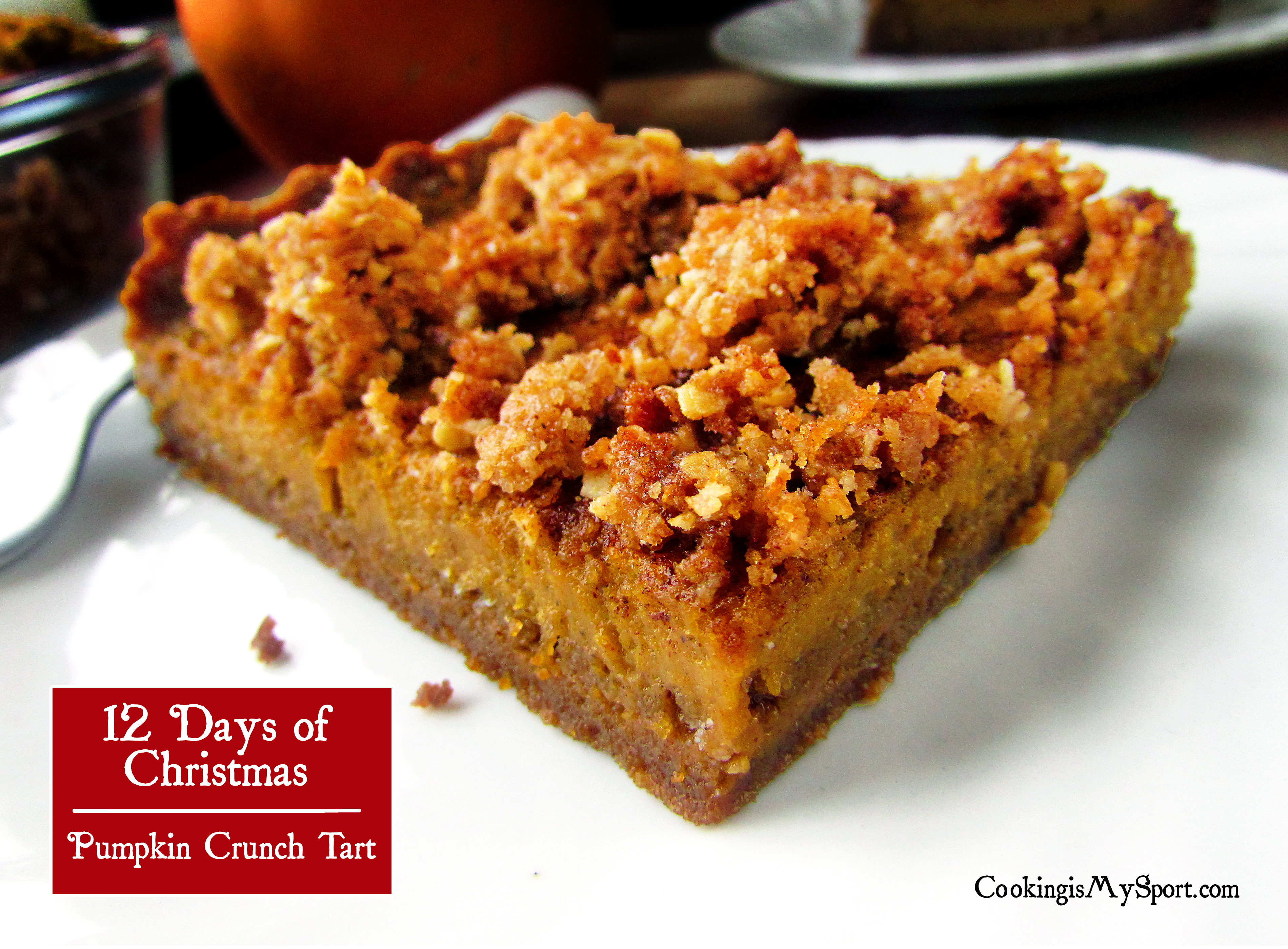 Another thing, I said this in the recipe itself, but I’ll go ahead and say it again here. I know that most people don’t have rectangle tart pans (or any tart pans at all) just sitting around their kitchen–not unless you’re a baking fiend with an addiction to bakeware (like someone I know). That’s fine. This recipe will absolutely work in a 9 or 10 inch pie dish, you’ll probably just have an excess of crust that you don’t have to use, and you’ll need to increase your baking time in the oven.

Look y’all, when I took my first bite of this pie warmed up with a smattering of whipped cream, I just had to sigh and give The Head Shake. You know which one I mean. The one you give when what you’re eating is almost TOO delicious. It was absurdly good.

(And yes, in case you were wondering). Just as good as sweet potato pie.

For Cinnamon Crunch: Preheat oven to 350 degrees Fahrenheit. Combine the flour, oats, brown sugar, and cinnamon in a food processor, and process a few times to combine. Add the butter and pulse until combined. Pat the mixture evenly into a 4-inch square on a parchment-lined baking sheet. Bake until golden brown and crisp, about 15-20 minutes. Remove and let cool. Transfer to a cutting board and chop into small pieces. Set aside.

For Filling: Whisk the eggs, egg yolks, both sugars, and molasses together in a medium bowl. Mix in pumpkin puree, cinnamon, ginger, nutmeg, cloves, and salt. Whisk in the heavy cream, milk, and vanilla extract. Either strain the mixture through a coarse strainer into a bowl, or give it a good blending in your blender, about 7-5 seconds. Whisk in the butter. Chill overnight in the refrigerator to allow flavors and spices to properly meld.

For Crust: Grease an 8 x 11 1/2 rectangular  tart pan*. combine the ginger snap crumbs, butter, and cinnamon in a bowl and mix until combined. Press evenly onto the bottom and sides of tart pan. Brush with the beaten egg. Bake until light golden brown and firm, about 12 minutes. Remove from the oven and let cool on a wire rack.

For Assembly: Place the tart pan on a baking sheet, pour the pumpkin mixture into the shell, (don’t overfill, it’s ok if you have some leftover) and sprinkle additional cinnamon over the top. Bake until the filling is set around edges but the center still jiggles slightly when shaken, 35 to 45 minutes. Transfer to a wire rack and cool to room temperature, about 2 hours.

(*This recipe can also be made in a 9 inch and 10 inch pie dish. The tart pan was just my preference. Also, using a tart pan will almost definitely guarantee you’ll have leftover filling.)