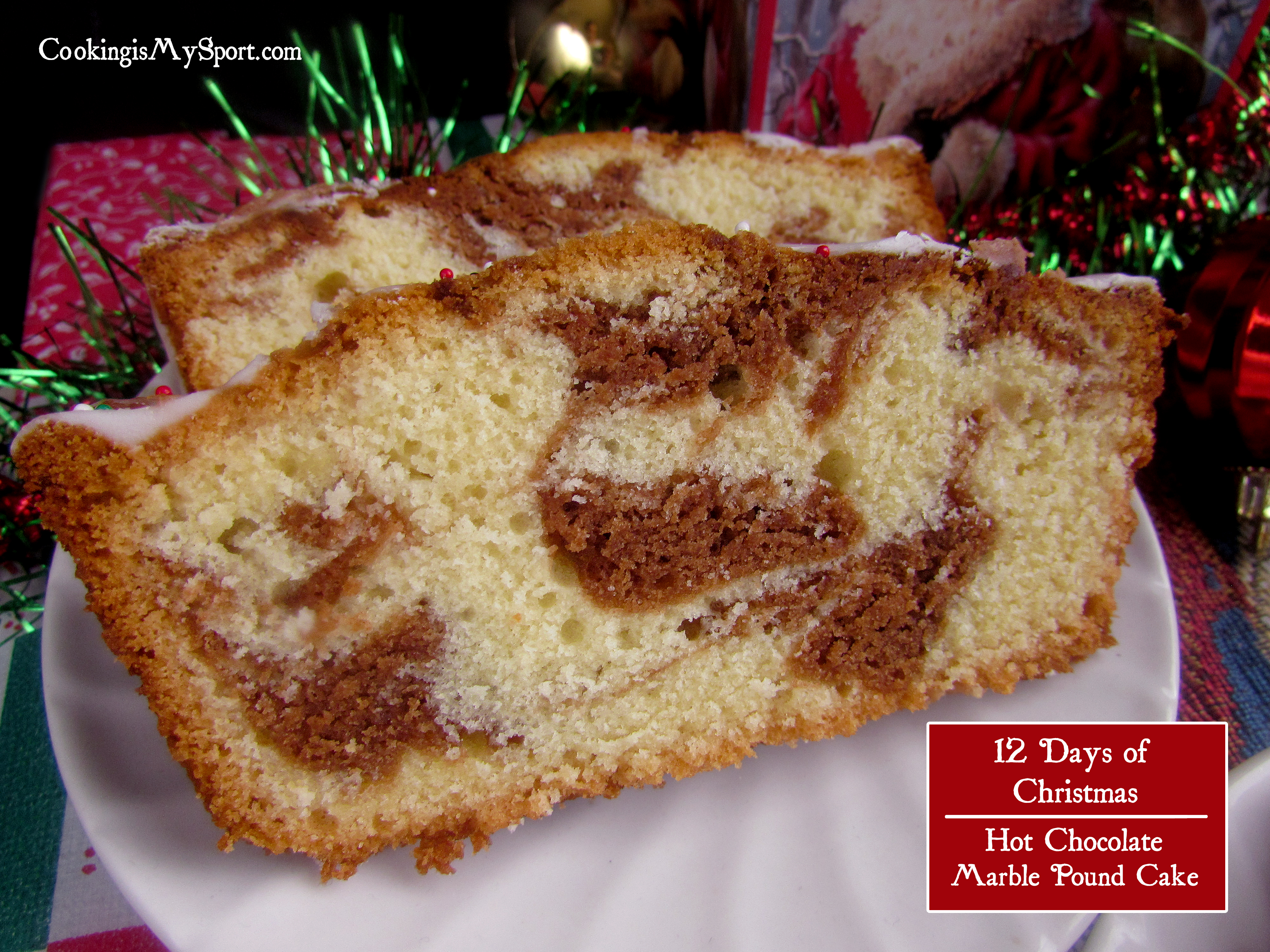 So, in my Dulce de Leche Hot Chocolate post, I think I may have been a little harsh in my critique of the ‘just add water’ hot cocoa mix as an ingredient. I may have given you the impression that I think it completely useless and something to avoided at all times. 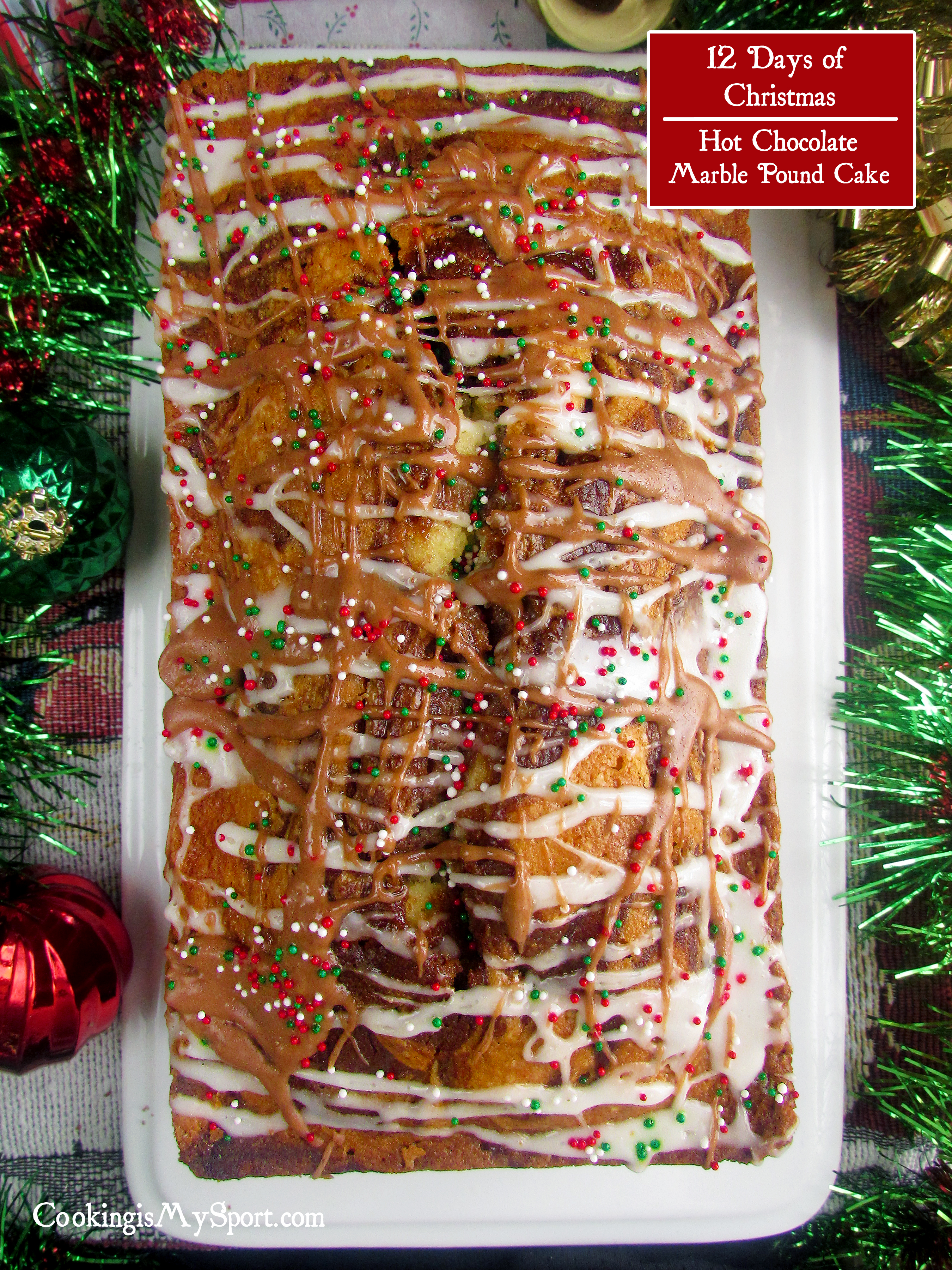 Do I prefer to have my hot chocolate straight from real melted chocolate and milk: yes.  Do I still think the sky blue colored name brand hot chocolate with the ‘Sound of Music’ inspired mascot is nasty and should be avoided at all costs? Absolutely.

However, there’s a time and place for everything, and this absolutely extends to hot cocoa mix–especially when it comes to my favorite of activities: baking. There are still other name brands that I think produce perfectly fine powdered cocoa mixes, both for drinking and baking. 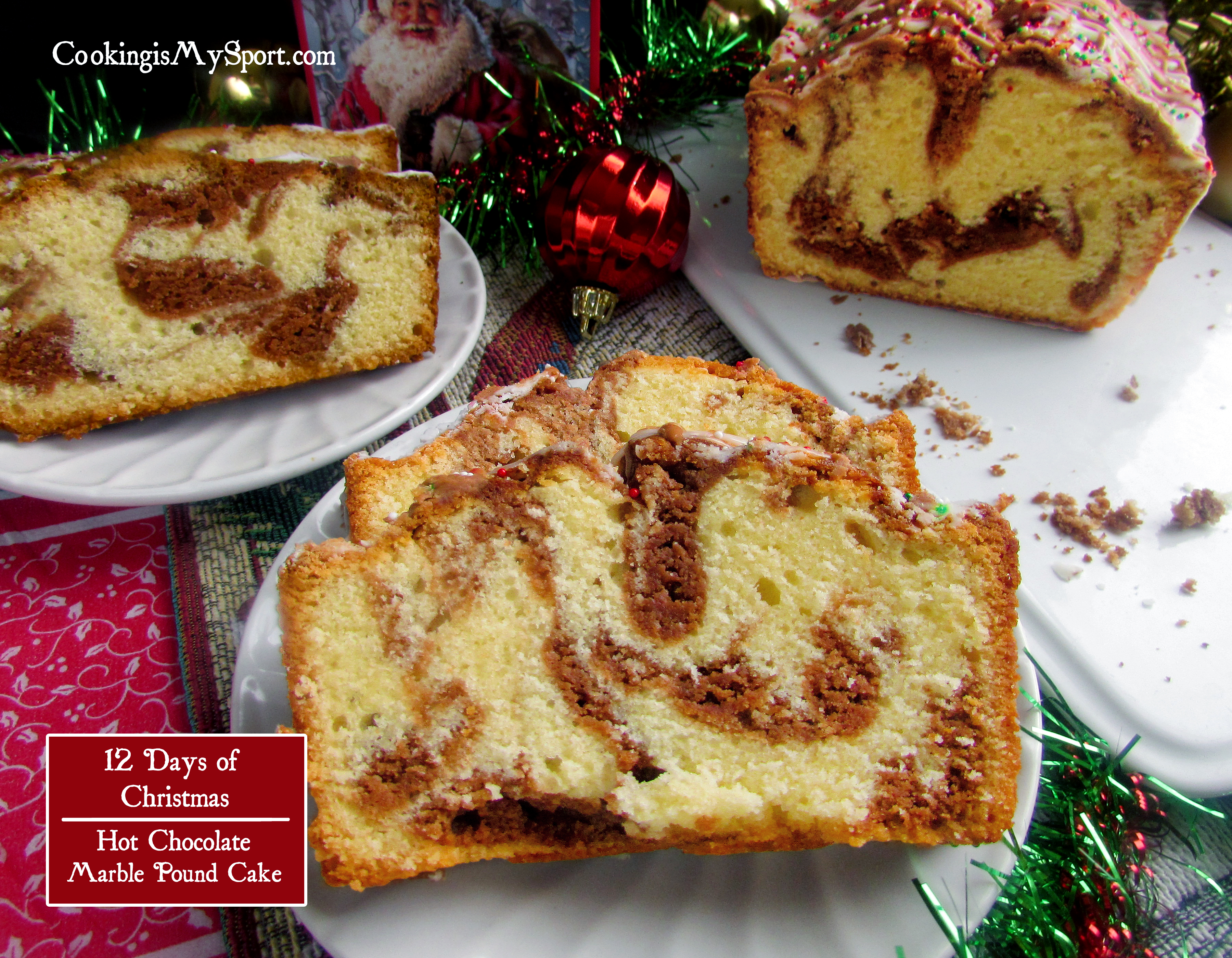 ….You guys DID know you could bake with hot cocoa mix with great results right? You totally can. You just have to make sure that (just like with booe) you pick and use a product that you would want to drink all on its own….which is exactly why I stand by my assertion that the Alps Girl hot chocolate should be avoided at all costs. It’s crap and I don’t think it would translate well in this recipe; stay away from it. 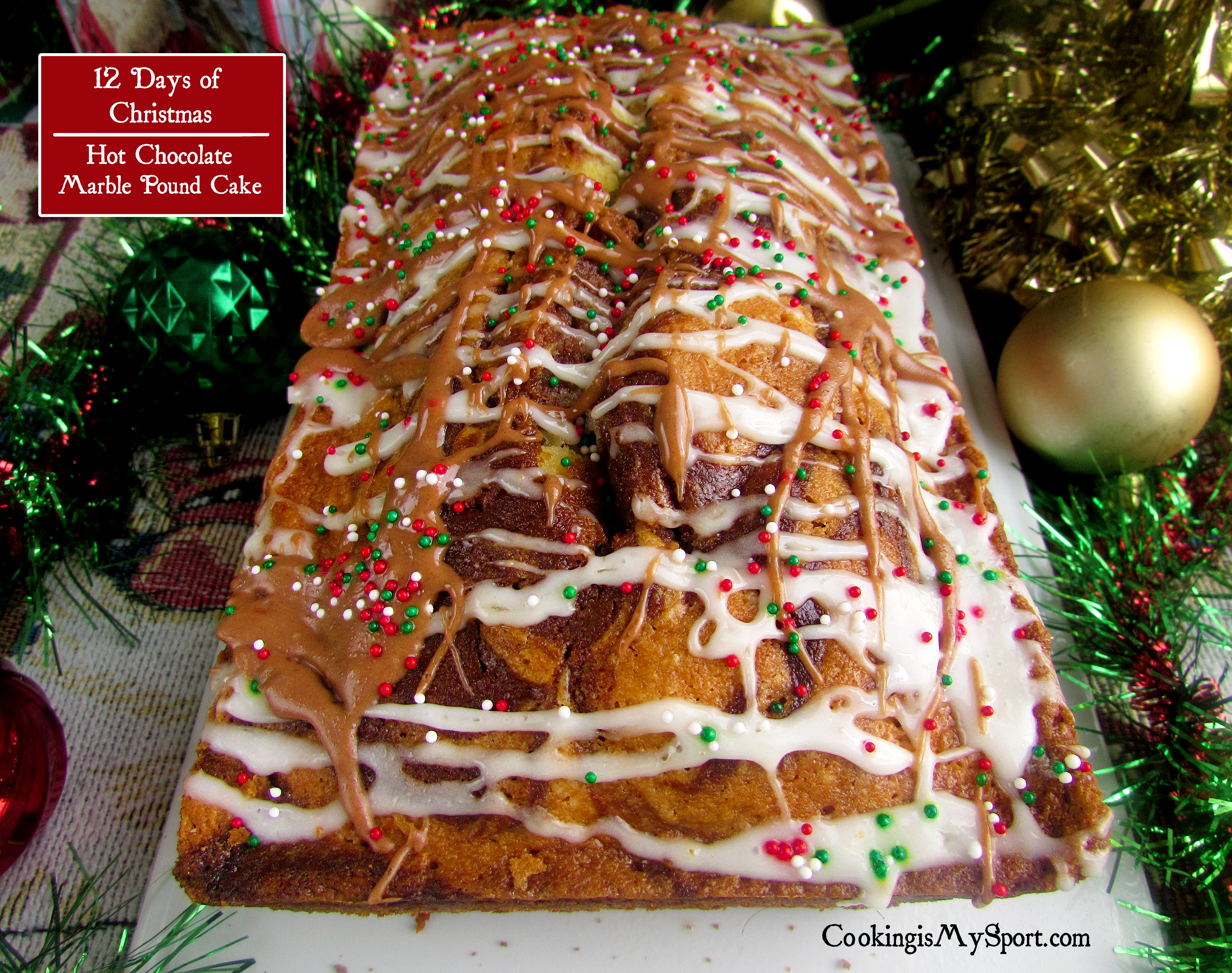 At this time of year, I’ve seen the Land O’ Lakes gift baskets floating around with the HUGE variety of hot chocolate mixes. I’ve had several of those before and I think they’re pretty tasty all on their own and would be just fine to use. I opted used Nestle Abuelita Mexican Hot Chocolate mix in this recipe, as personally I prefer the flavors of Mexican hot chocolate to regular. Plus, the mix produces pretty tasty hot cocoa all on it’s own. If you have another gourmet brand of hot chocolate you want to use, have at it. Like I said: just make it something you’d want to drink.

I’ve only made marble cake once before and to be honest, it wasn’t very successful. The marbling effect didn’t work out the way I wanted to and it ended up sinking to the bottom of the pan so that it wasn’t pretty and…yeah. Just a bad kitchen memory. But as the saying goes: if at first you don’t succeed, try try again.

I gotta say, I think my second attempt at marble cake came out not just pretty, but pretty damn tasty too if I may say so myself. What’s more, it’s pretty easy to do. 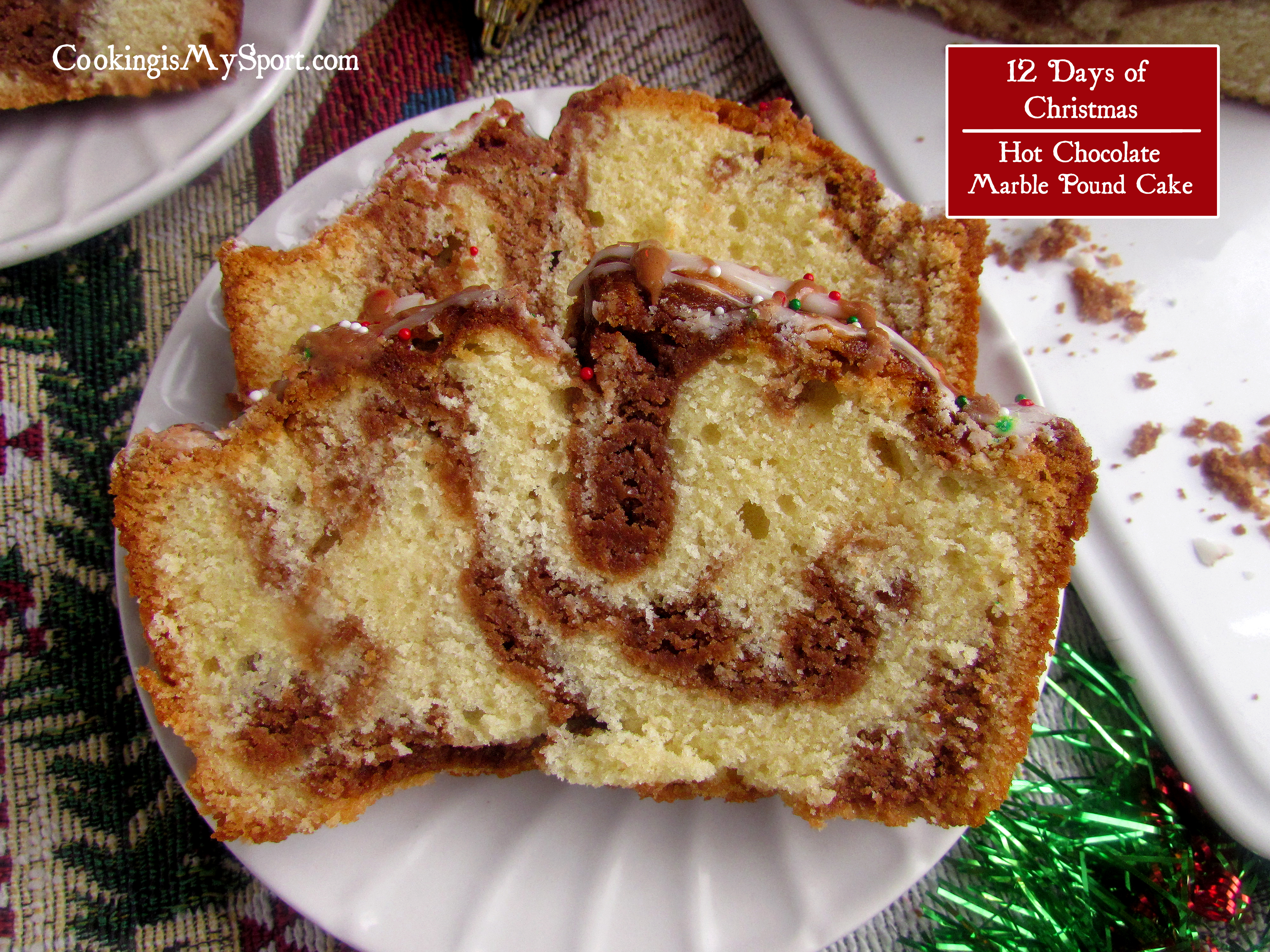 Pound cake is the perfect vehicle for a marble cake because everyone loves a pound cake all on its own anyway. Once you take a standard vanilla pound cake batter and swirl it with a Mexican Hot Chocolate flavored one, you’re really just improving on a classic dessert that you’d be hard pressed to find someone who isn’t going to want a slice.

Oh! And maybe even eating a slice with a warm cup of hot cocoa on the side. Heh. See what I did there?

In a medium bowl combine the flour and salt together and set aside. In a small bowl whisk together the eggs, sour cream or milk and vanilla extract and set aside.

In the bowl of a standing mixer and using the wire attachment (or you can use a handheld mixer), cream together the butter and the sugar until light and fluffy. Alternately add in the flour (about 1/3 a cup at a time) and the egg mixture, starting and ending with the flour until just combined; don’t overmix.

Transfer about 1/3 of the batter to the small bowl you mixed the eggs/sour cream or milk in. Stir in the hot chocolate mix.

Take the greased loaf pan and spoon in a layer of the vanilla batter, using the butt end of the spoon or a rubber spatula to smooth it out to all four corners. Take about three rounded tablespoons of the chocolate batter and dollop it on top of the vanilla. Use the pointed end of the knife to swirl the chocolate batter into the vanilla. Repeat, spooning another layer of vanilla batter on top followed by 3 more dollops of chocolate. When you’ve used all the batter, insert the knife down to the bottom of the pan and give it a few more swirls; not too many or you’ll ruin the marble effect.

Give the pan 2 or 3 taps on the counter, place on a baking sheet and bake for 90 minutes, or until a knife inserted in the center of the cake comes out clean and the inner temp of the cake reaches 195-200 degrees Fahrenheit.

Let the cake cool in the pan for about 10 minutes, then invert onto a wire rack to cool completely.

For the icing: Place the powdered sugar in a small bowl and add enough milk to make a thick icing, 1 tablespoon at a time. Using the tines of a fork, drizzle it on top of the cooled cake. Take the leftover frosting and stir in the melted chocolate chips. Once the white icing has cooled, take the chocolate icing and drizzle a second layer of icing on top of that. Top with sprinkles if desired. Allow icing to set before cutting and serving, about 30-45 minutes.