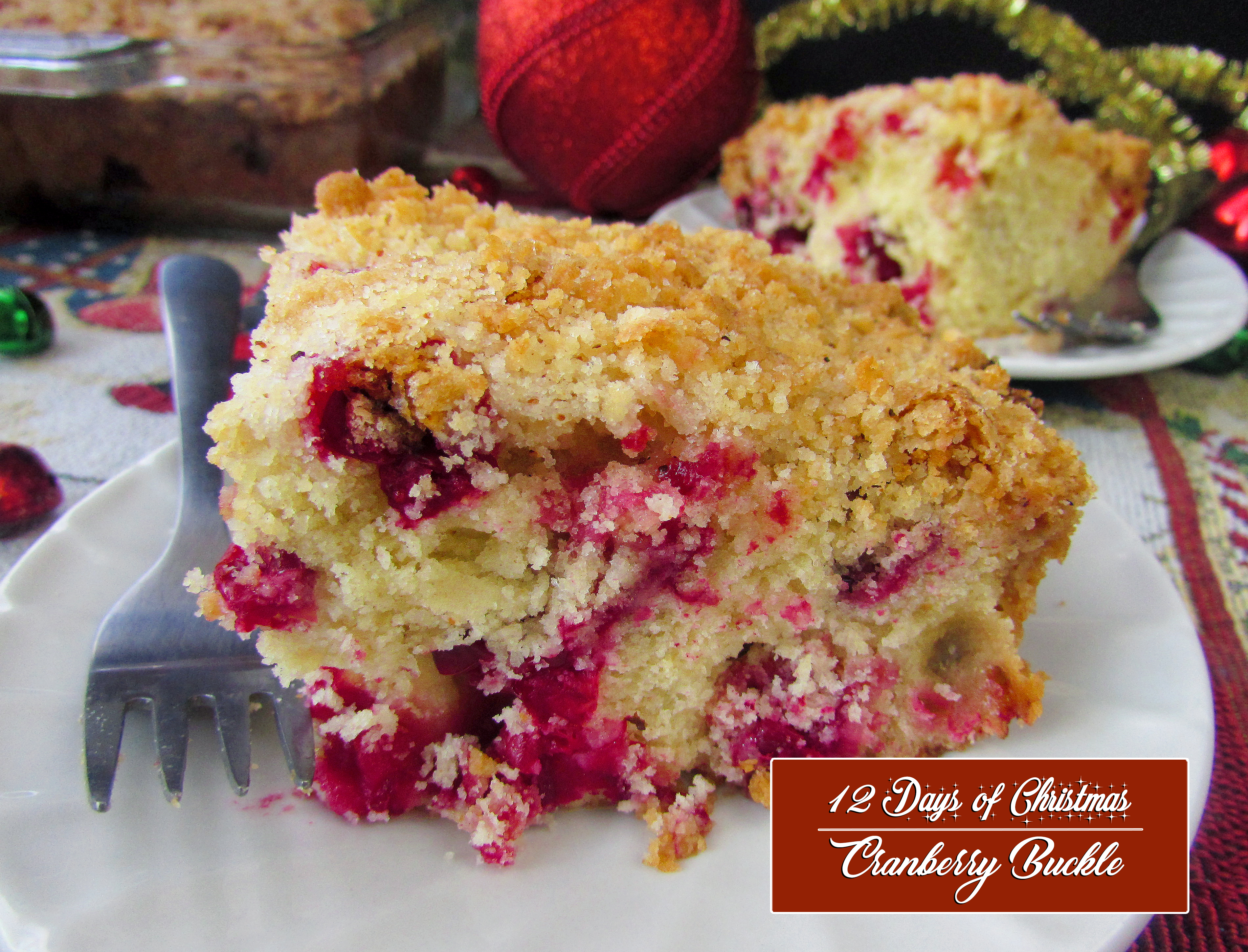 Have you ever cooked or baked something that was really really good, but needed to come with an explanation?

I was looking over the Recipe Index of this blog and realized that I do that pretty often, actually. I’ll announce that I’m making something to my family and the response will be, “Huh?” or “What’s that?” 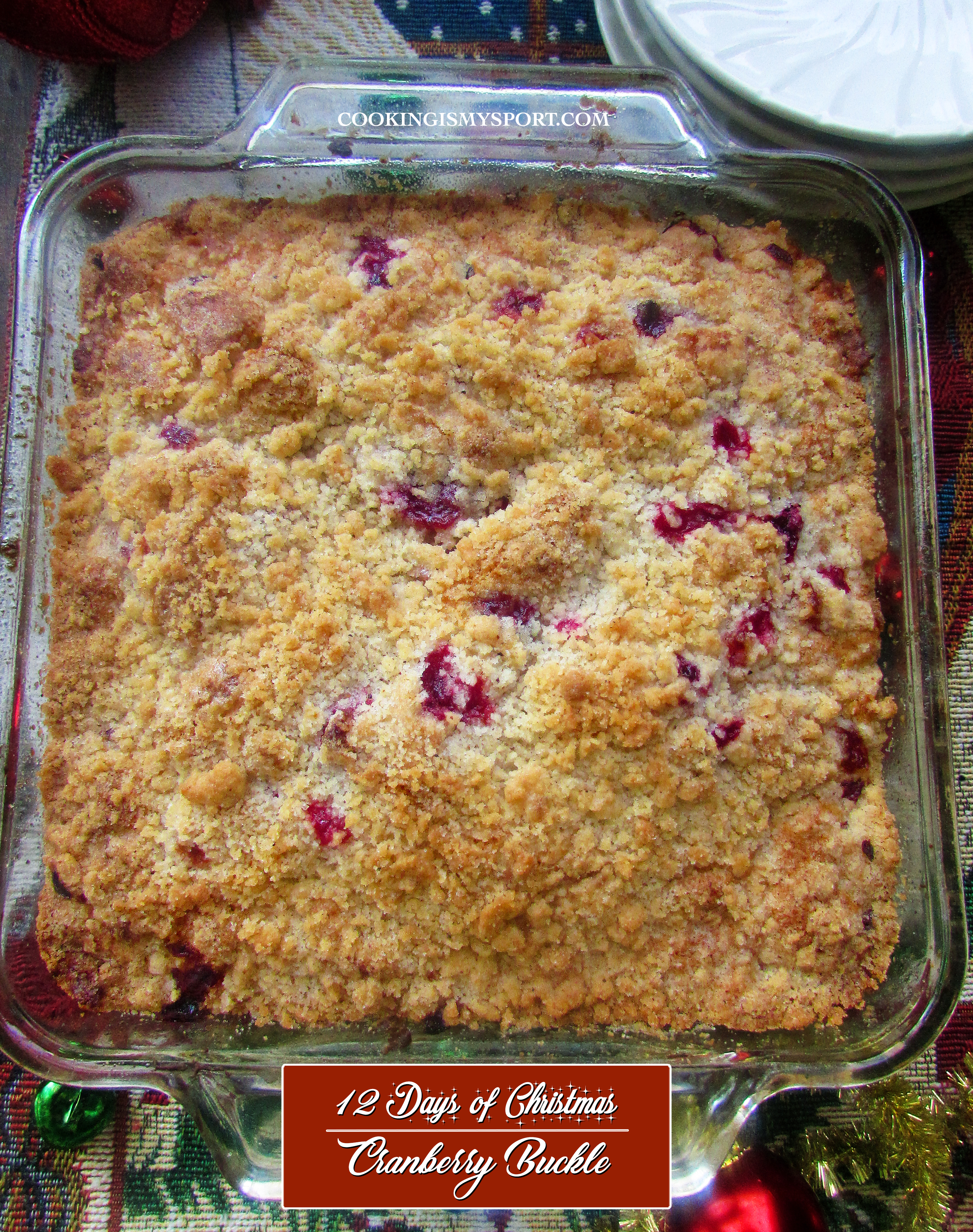 Me: “I’m making Shakshuka and naan for dinner.”

Me: “It’s kinda like a tomato sauce, except you put cumin, eggs and ground beef in it. The naan is the dipping bread that goes along with it.”

Me: “Look, just don’t worry about it. I know what I’m doing, and it’s going to be fantastic, trust me!” 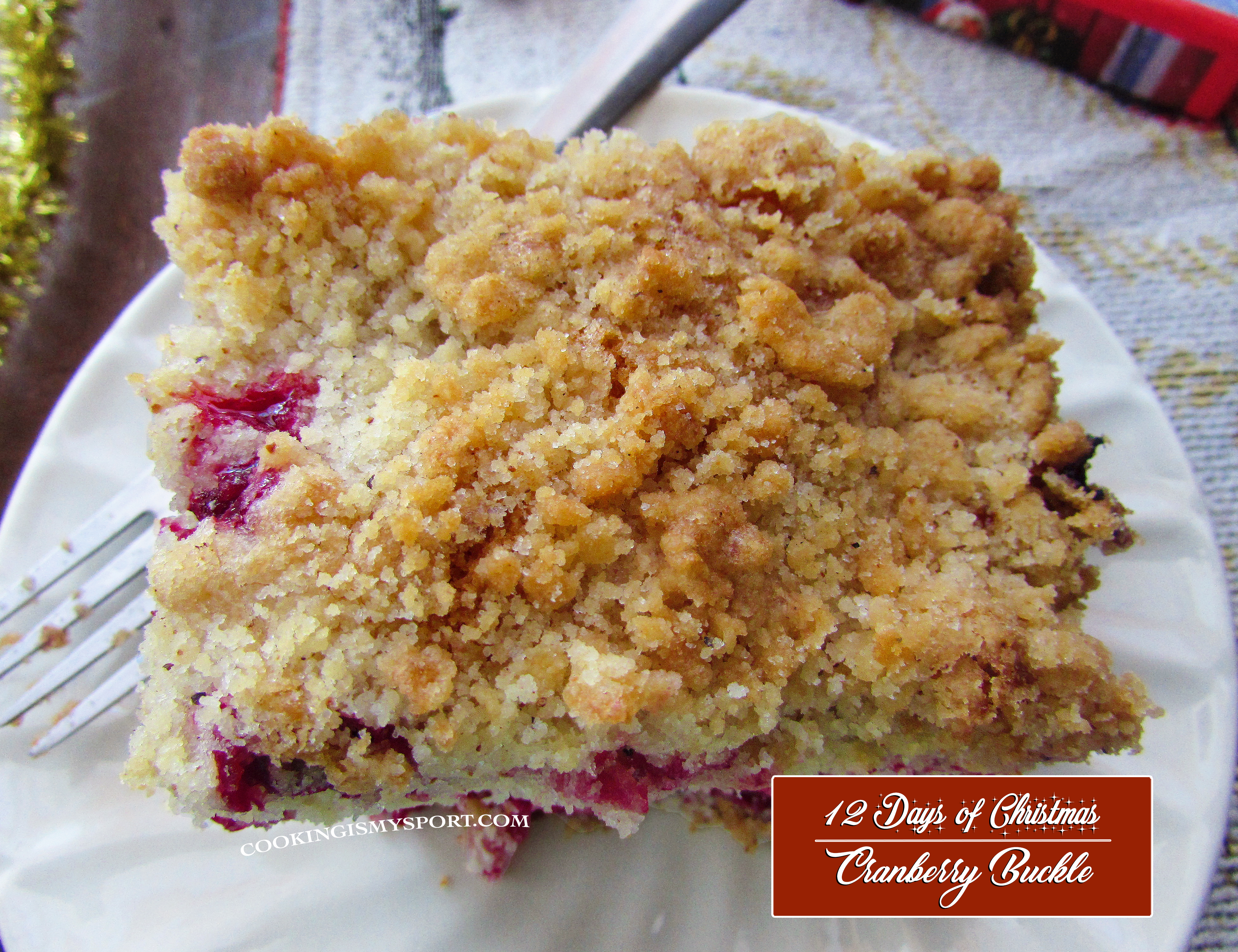 Occasionally it may be a miss, but 9 times out of 10, I’m usually right and the recipe that needed an explanation was still delicious.

Today I’m sharing another one of those recipes that I had to give an explanation for. Unless you’re a baker or someone who bakes with fruit pretty often, I’ve noticed that not a lot of people will know exactly what you’re talking about when you announce that you’re going to bake a buckle. They may have a vague idea, but if you had to differentiate it from say, a cobbler, grunt or pandowdy, they probably won’t know. 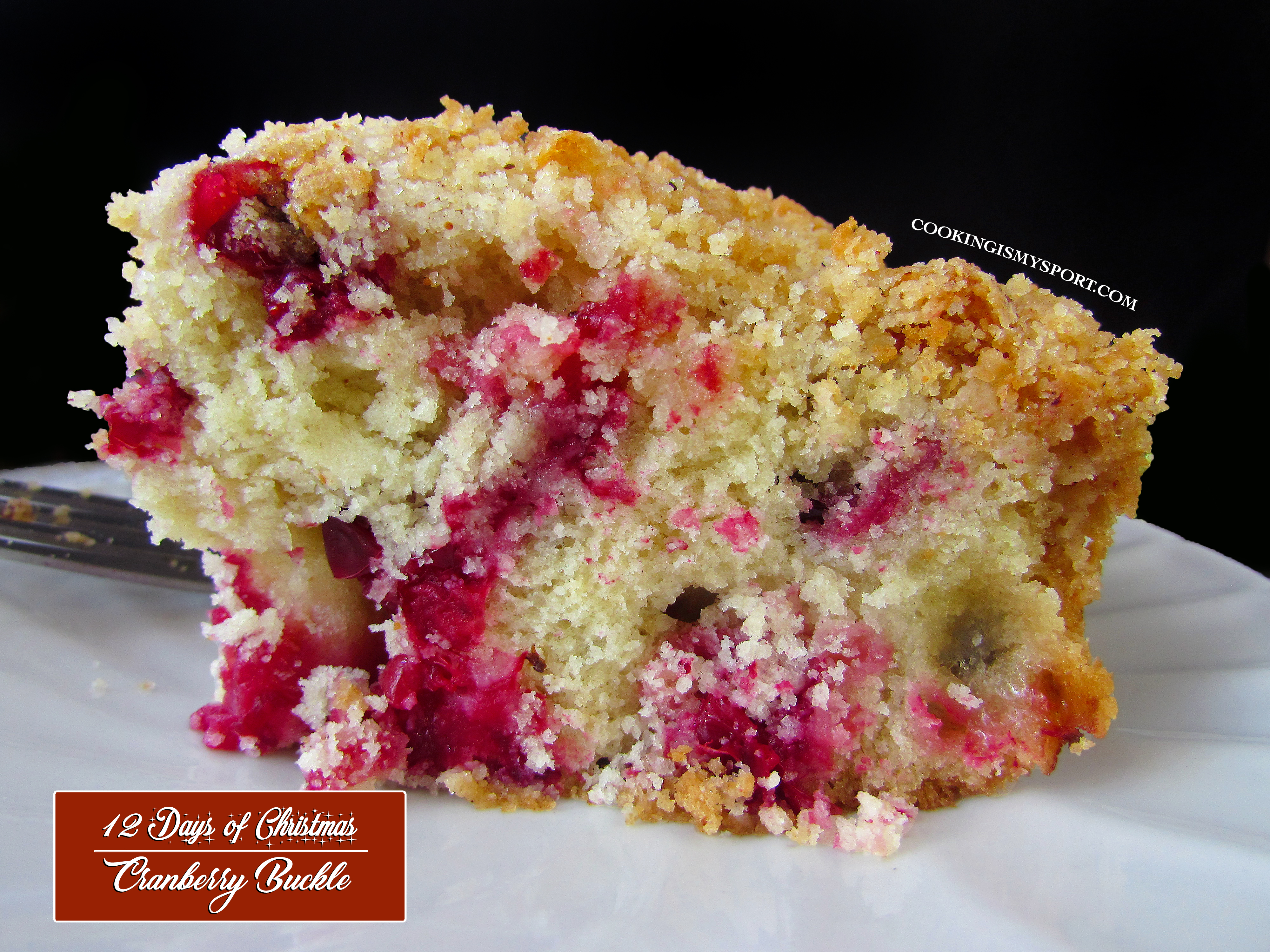 The closest comparison that I can give to a buckle is a coffee cake. This coffee cake batter has a lot of fruit in it–like, a lot. There’s actually more fruit than batter. The batter’s function is to absorb the fruit and hold it all together like a cake-like sponge. The cake does rise thanks to leavening agents, but the amount of fruit in the batter does weigh it down. There’s also a streusel topping that gets sprinkled on top of the batter before baking. After baking, the bumpy uneven surface of that streusel looks ‘buckled’–hence the name. 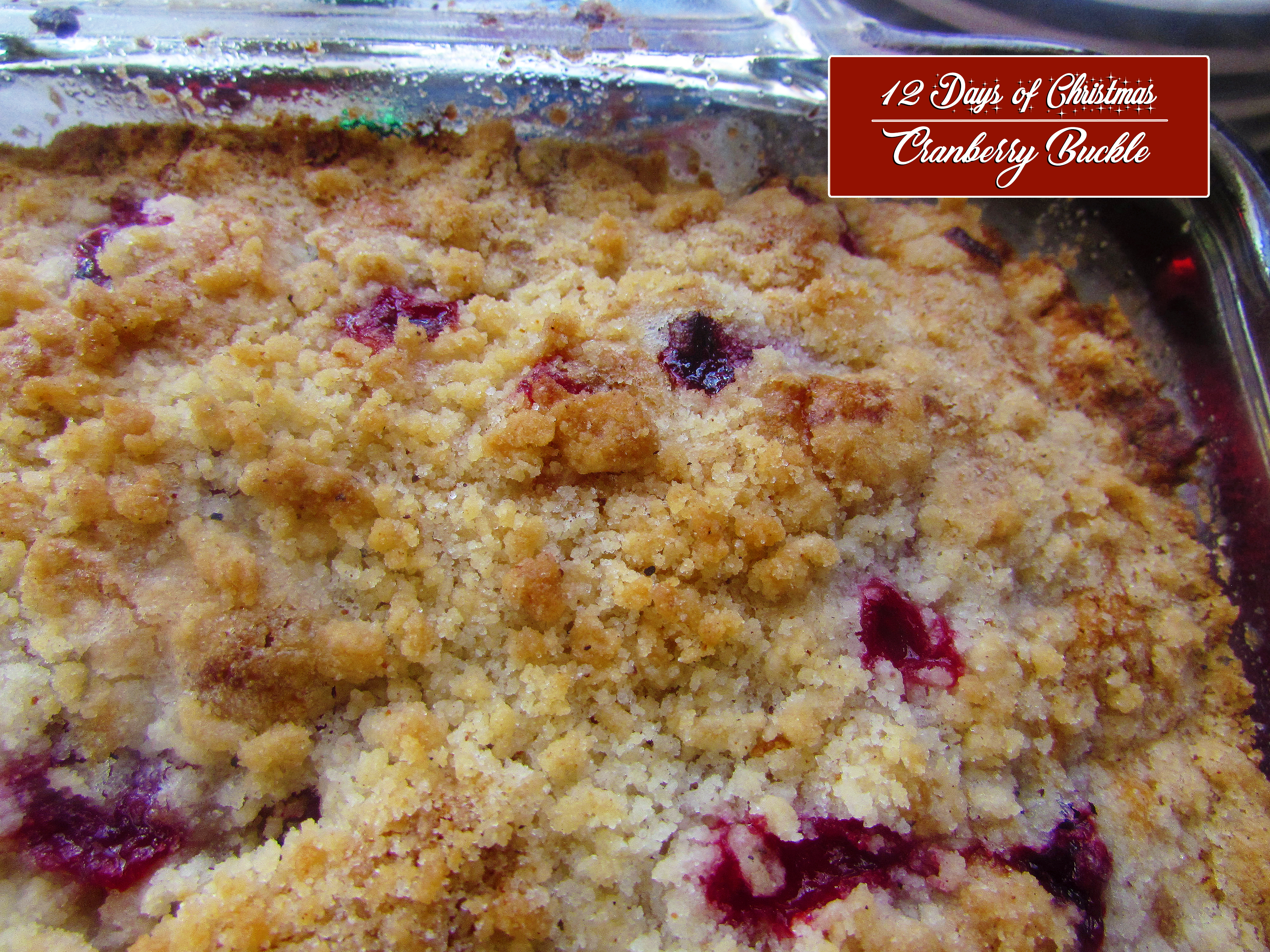 Most buckles are made with blueberries, but because this was for the 12 Days of Christmas, I decided to make mine with cranberries, which I find more festive (and tasty). It came together in literally minutes.

You may be tempted to reign it in when it’s time to add in the cranberries. I was. Three cups is a lot, especially for such a small pan of cake and a batter that is thick. But, listen: we’ve already been through this. The primary function of the batter is to just hold the fruit together. The more fruit that is in this, the better it’s going to turn out. Trust me. Add the whole three cups. Just do it. 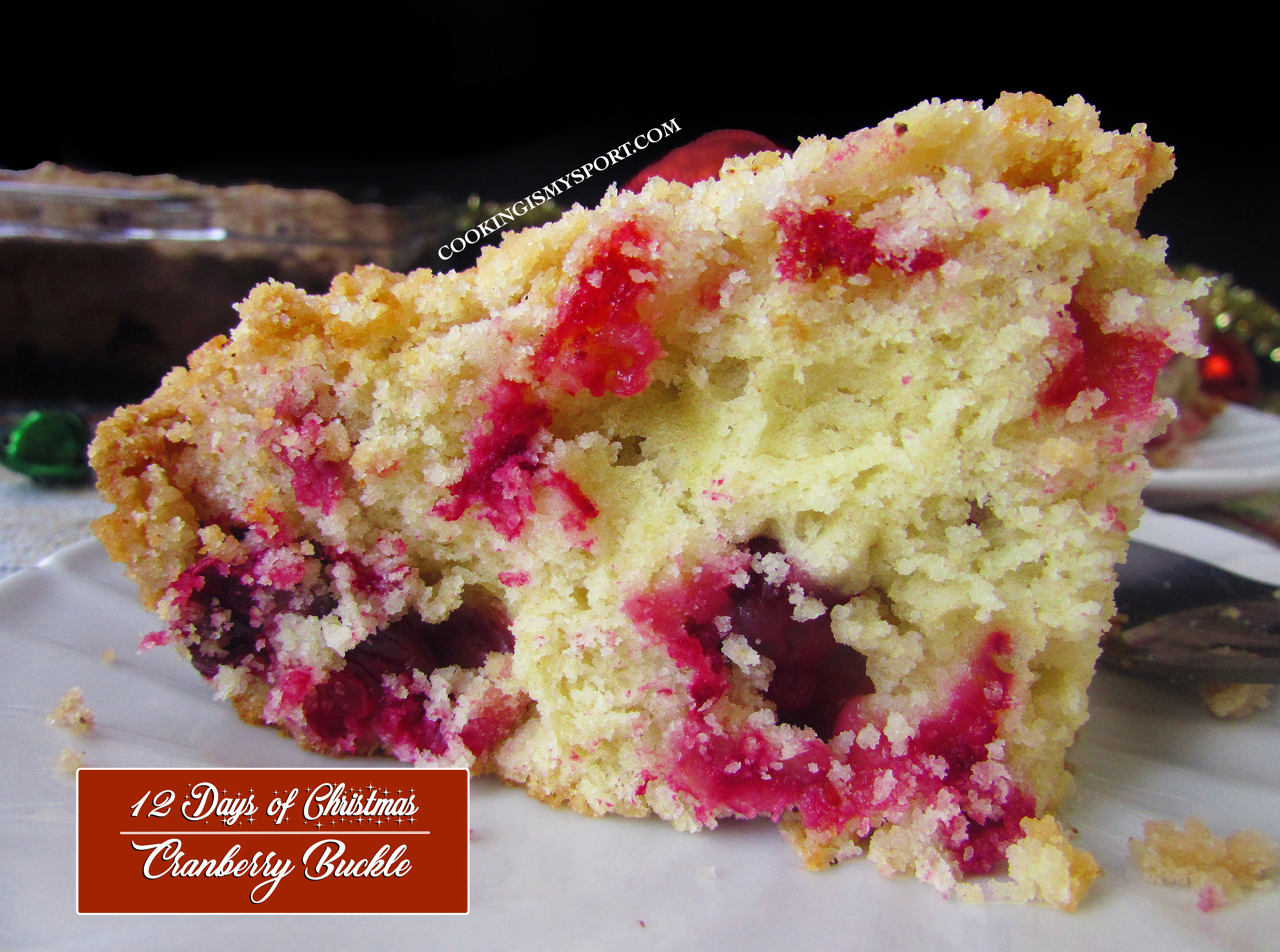 Same thing with that streusel: it may seem like it’s too much when you’re mixing it together. It’s not. It’s just enough. Dump it all on top of the batter. The whole she-bang. You will thank me later.

We loved this so much. I had originally intended to send it to an office to share, but upon sampling it, the Family made an executive decision that we were no longer interested in sharing, and that the Cranberry buckle would be staying right here at home with us. Once you bake this, you’ll understand why.

Don’t forget to check out the other recipes from the 12 Days of Christmas series if you haven’t already:

In a small bowl use a wire whisk or a fork to combine the flour with the baking powder, salt, and ginger and set aside.

In the bowl of a standing mixer using the paddle attachment (or using a handheld one), cream together the butter and the sugar until it’s creamy. Add the egg and stir just until combined.

Pour the vanilla and milk together in a small cup.

Add the flour and the milk to the batter alternately in batches, starting and ending with the flour. (This batter is supposed to be thick, but if it’s too thick to spread in the pan and/or too crumbly, you can add in a few tablespoons of milk–just enough to make it smooth enough to spread.)

For the streusel: combine the flour, sugar and nutmeg together in a small bowl. Use the tines of a fork to cut the butter into the dry ingredients until it looks like course breadcrumbs. Sprinkle on top of the batter in the pan.

Bake until golden brown and puffed up in the middle, 45-50 minutes. Allow to cool for about 10 minutes before serving.

Sharing at Fiesta Friday #253: co-hosted this week by Liz @ Spades, Spatulas, and Spoons and Mila @ Milkandbun.