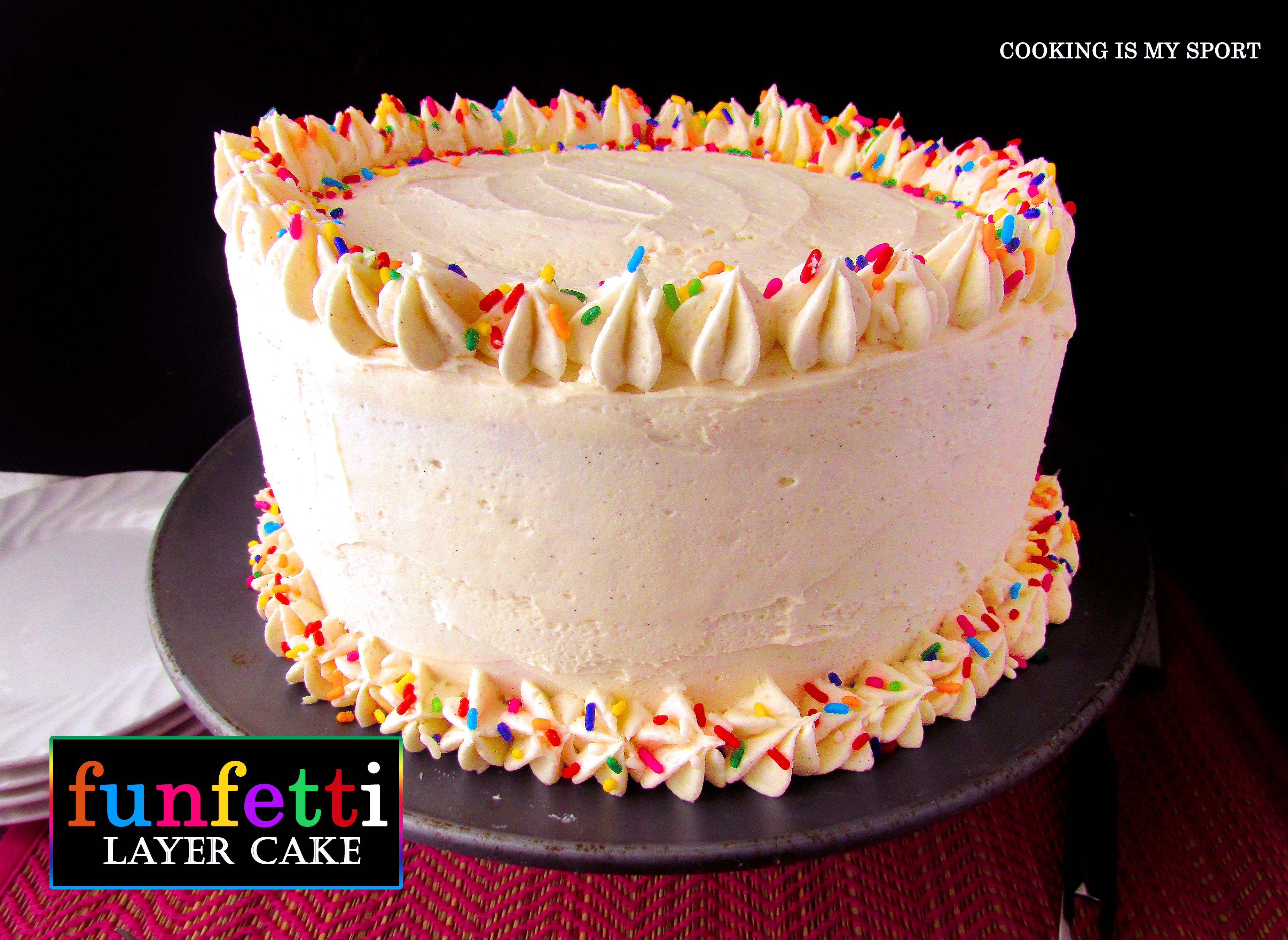 I don’t care who you are, how old you get, how your taste buds “mature”  to other things or how long it’s been since the last time you’ve had it. There is one thing I still know for sure:

Nobody ever stops loving Funfetti cake.

Ever since that first taste we get of it in our childhoods at home or at birthday parties, I think there’s just this permanent appreciation we have of that distinctive taste; nothing can replace it. It’s a go-to, sure crowd pleaser for everybody. You serve a funfetti cake and chances are, EVERY ONE will want a piece. 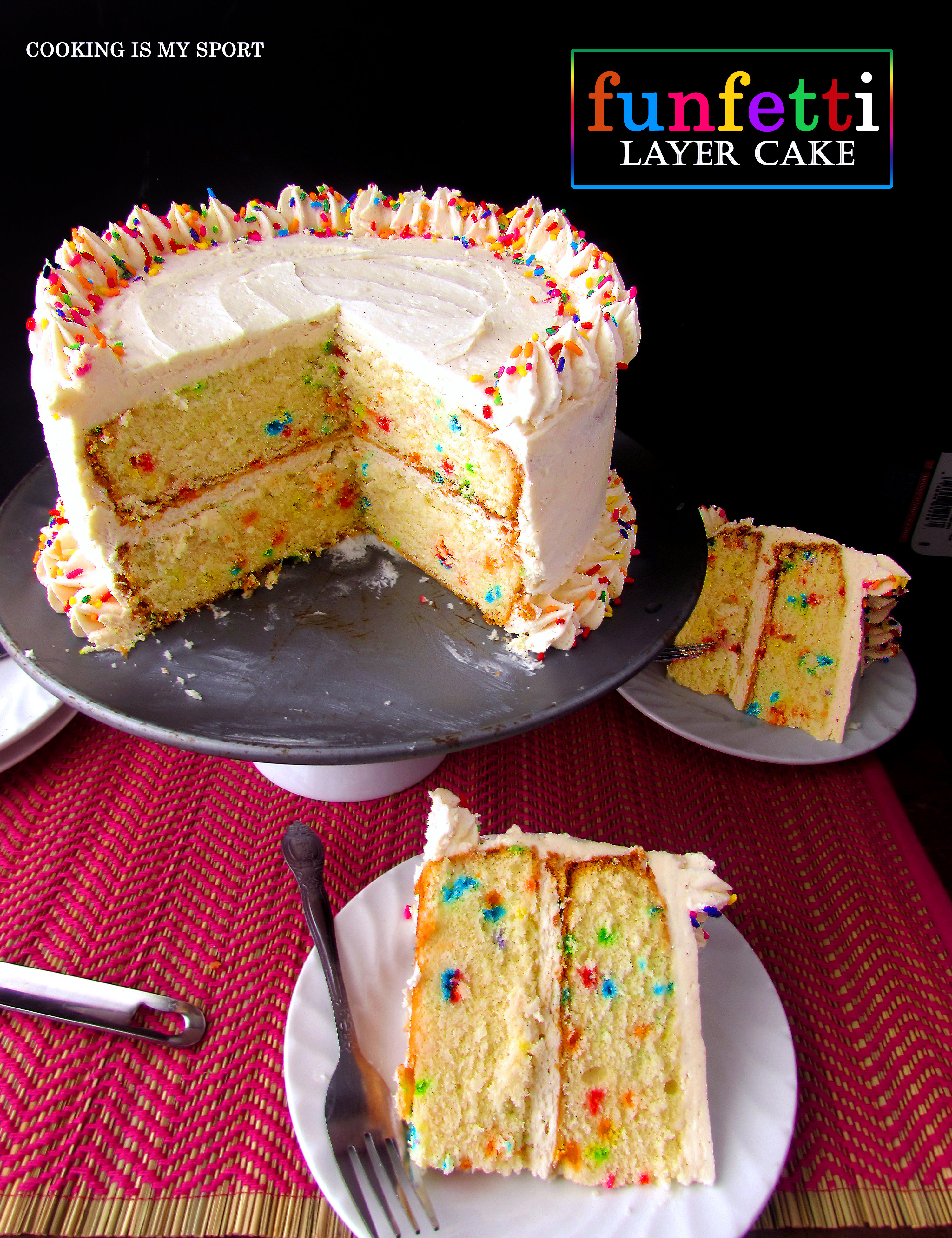 For me, there’s just one problem: most of the time, the only way I can get a funfetti cake is if it comes out of a box from a pre-made mix.

And if you guys know anything about me by now, it’s that I just…  I try to stay away from cake mix out of the box. I’ve got nothing personal against those that do use it, it’s just for me, once box cake is baked it starts a countdown for how good it’s still going to taste.

In my opinion that’s roughly only about a day or two. After that, there’s just something about the way the ingredients in the cake react to the exposure of the air and then the quality of the taste begins to decline. 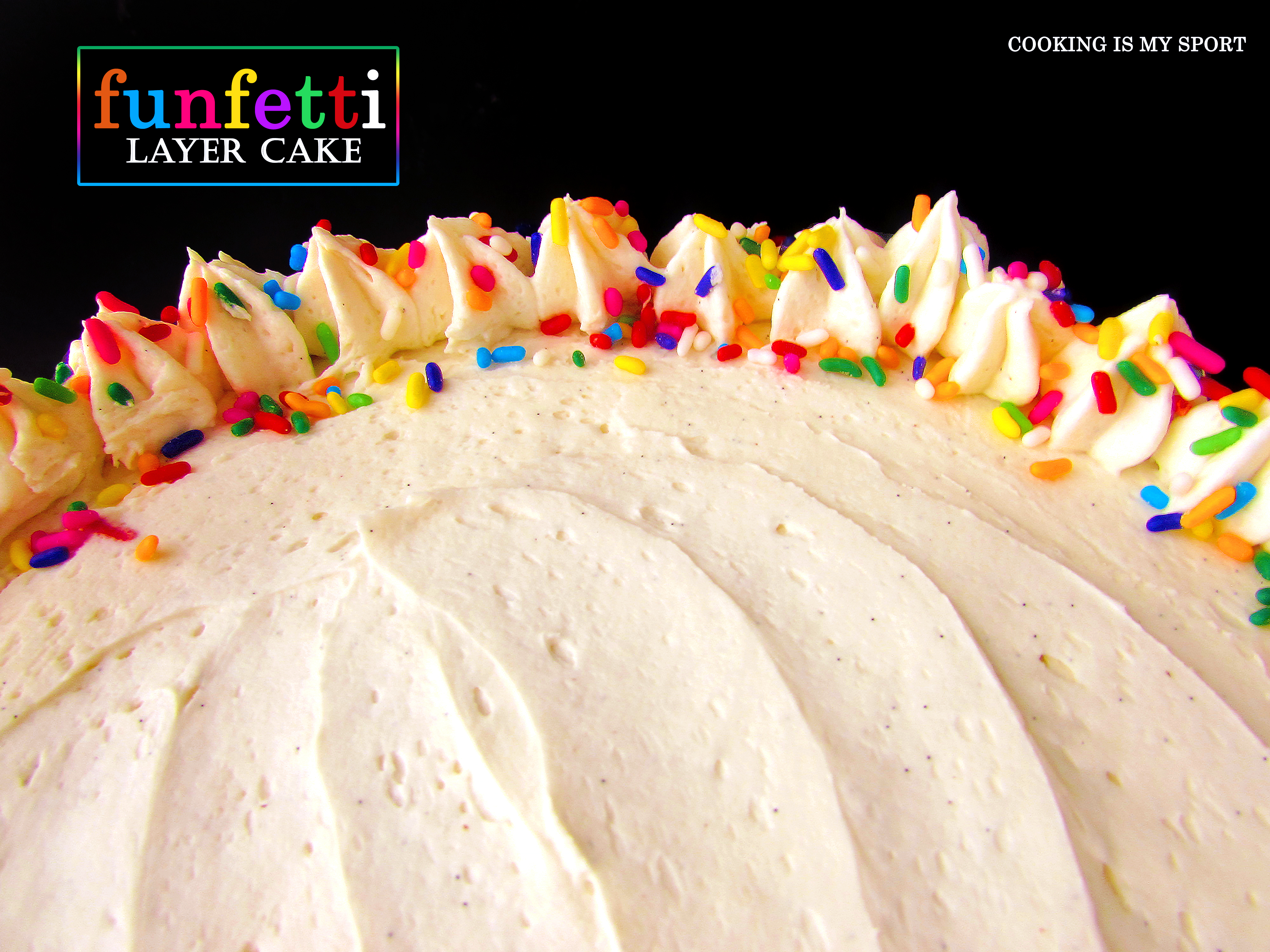 In addition, the canned stuff they try and call funfetti “frosting” sucks. Don’t even get me started on what happens to it after a day or two of sitting on top of a box cake in a baking dish.

But all of that is still no reason why we shouldn’t be able to take a walk down memory lane and get that funfetti cake fix we’ve been missing from way back when. 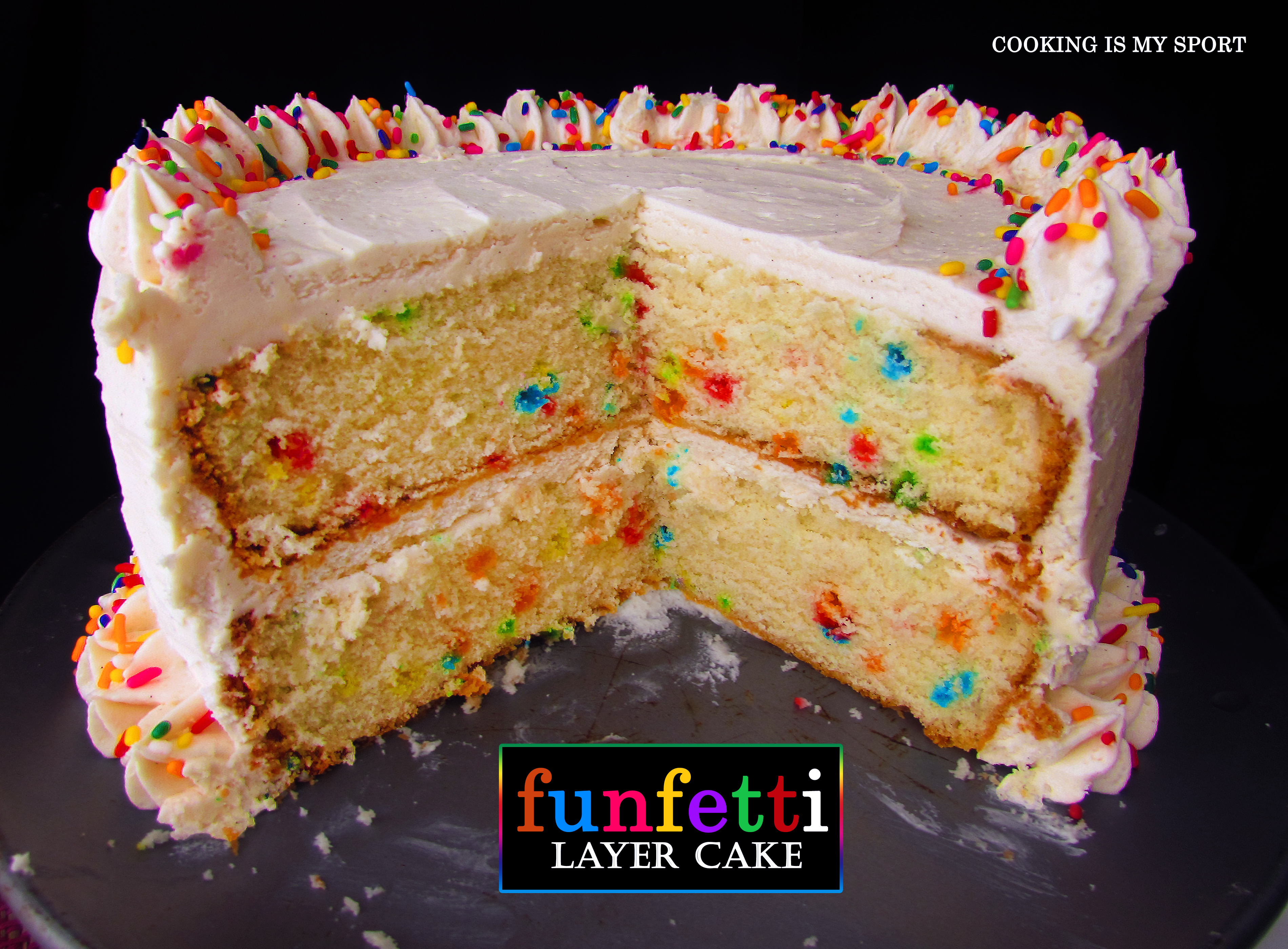 And yes, it CAN taste better.

At the core of every delicious funfetti cake, is a fantastic white cake recipe. You just have to have a good, moist and fluffy white cake with that intense vanilla flavor or its going to either taste way too sugary and artificial (like the box ones do in my opinion), or it won’t taste like much of… anything, really. 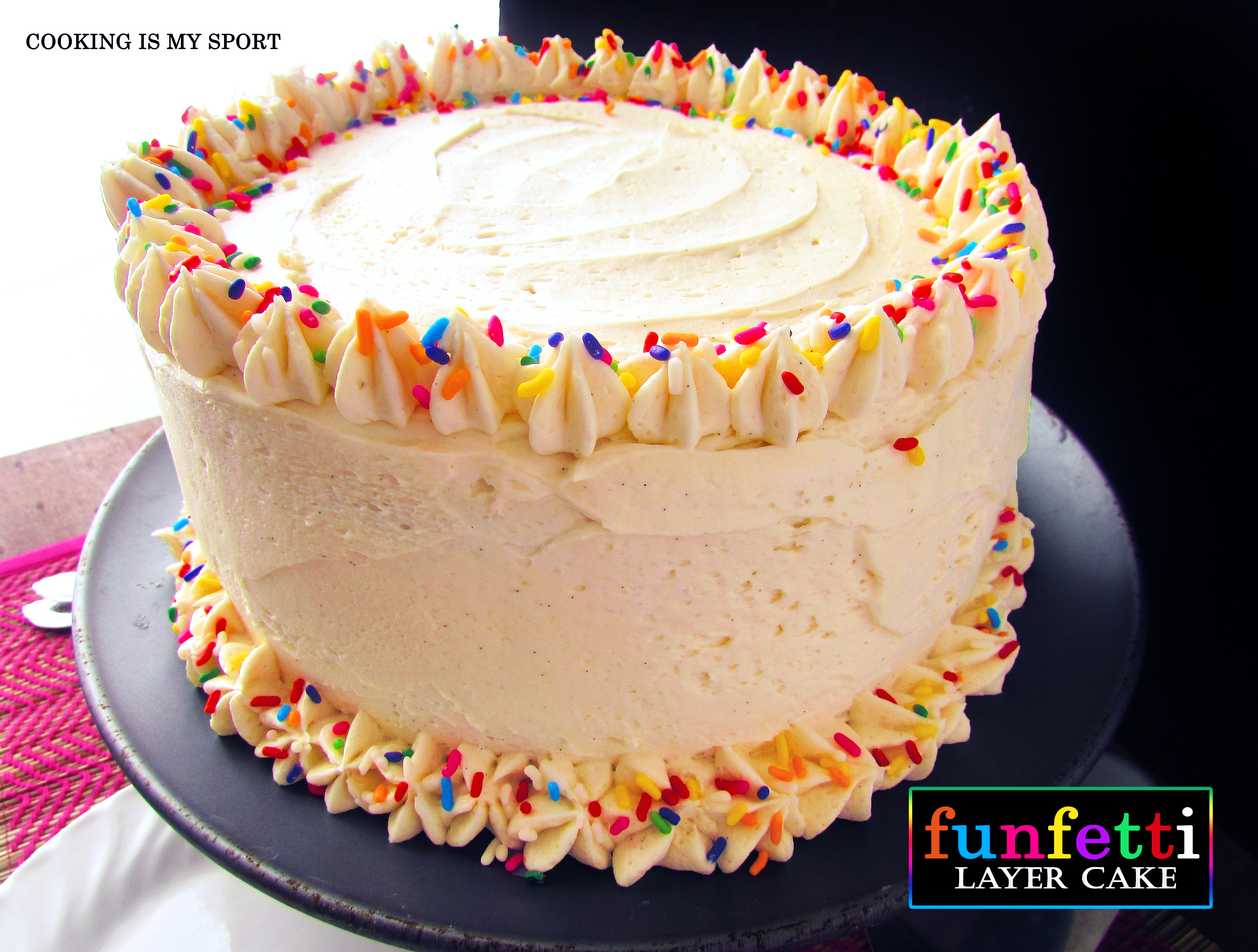 After you’ve got the cake down, you’re still not out of the woods. For a grown-up funfetti cake, you also need a good, quality vanilla buttercream. Buttercream that’s delectably delicious enough to eat clear off a spoon.

Don’t you dare even THINK about using some pre-made crap that comes out of a can.

Have some respect for yourself. You’re better than that.

My niece turned three a few weeks ago and I was lucky enough to be the one to put together her birthday cake. Her mother told me to make whatever kind of cake I wanted to, so I thought, who better  than to give her her first taste of Funfetti Cake, than her Auntie Jess?

Frankly, I’m honored to have been given the task. A child’s first Funfetti Cake is rite of passage so far as I’m concerned. This could change the trajectory of her entire life, am I right?

So naturally, there was no way I was going to let it come out of a box. 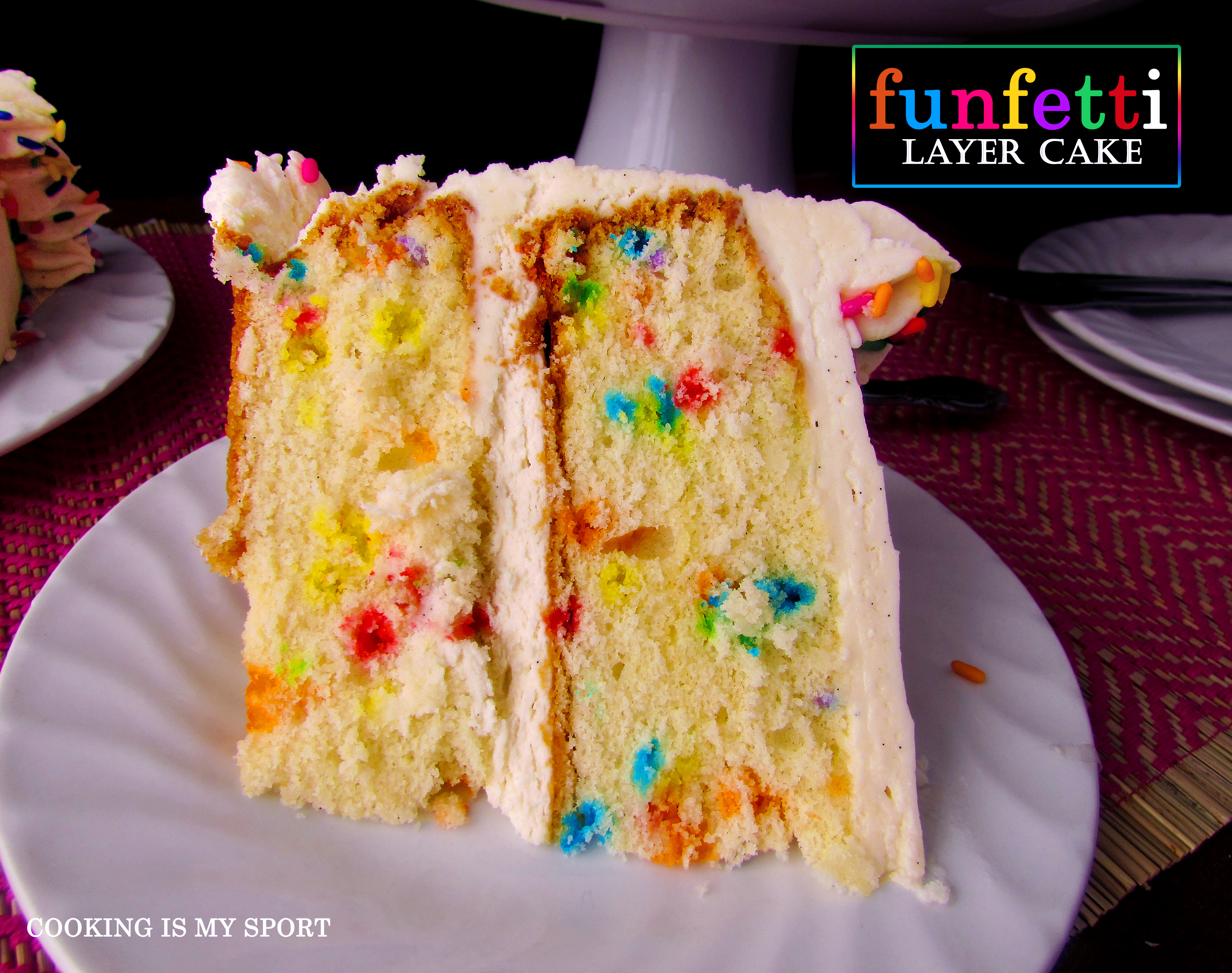 There’s a crucial ingredient to both the cake and the buttercream that if you can get your hands on it, I REALLY do recommend you don’t do without: Vanilla bean paste.

Vanilla beans can run pretty pricey and I’ve found that vanilla bean paste is an excellent and more inexpensive way to still get all the flavor of you get from raw vanilla beans. I’ve found it at Hobby Lobby, and grocery stores that sell Wilton bakeware and cake decorating tools–and of course, you can always get it online. However, it is perfectly fine to use regular vanilla extract. The vanilla ‘punch’ just won’t be quite as strong.

I’ll tell you guys, that first bite you take of this cake will INSTANTLY take you back in time to when you were a kid. The thing is, your adult taste buds will also thank you because you’ll be able to taste the quality of the ingredients and the irreplaceable flavor of a cake that’s been made from scratch.

Let’s let everyone at this week’s Fiesta Friday #111 eat cake, shall we? Thanks to our co-hosts this week, Naina @ Spice in the City and Julianna @ Foodie On Board.

In a large mixing bowl, cream together the butter shortening, baking powder, sugar, salt and extracts until fluffy and light, at least 5 minutes. Add the egg whites to the butter mixture one at a time, beating well after each addition.

In a small bowl, toss the sprinkles with the flour until they’re evenly coated. Shake off the excess flour from the sprinkles, then GENTLY fold them into the batter with a rubber spatula.

Beat butter and salt at medium speed with an electric mixer 1 to 2 minutes or until creamy; gradually add powdered sugar alternately with 6 tbsp. milk, beating at low speed until blended and smooth after each addition. Stir in vanilla bean paste. If desired, beat in remaining 1 tbsp. milk, 1 tsp. at a time until frosting reaches desired consistency.

Make sure both cakes are evenly leveled before beginning to decorate. Line the edges of a cake platter with strips of parchment paper to keep the platter clean while you assemble the cake. Place one (evenly leveled) cake layer on the platter. Spread 1 1/2 cups of the frosting evenly across the top of the cake with a spatula. Place the second cake layer on top, then spread with just enough over the top and sides to make a crumb coat. (It should be thin). Refrigerate cake for one hour until the crumb coat is firm. Finish spreading the remainder of the frosting on the cake, decorating with sprinkles if desired. Remove the parchment strips from the platter before serving.