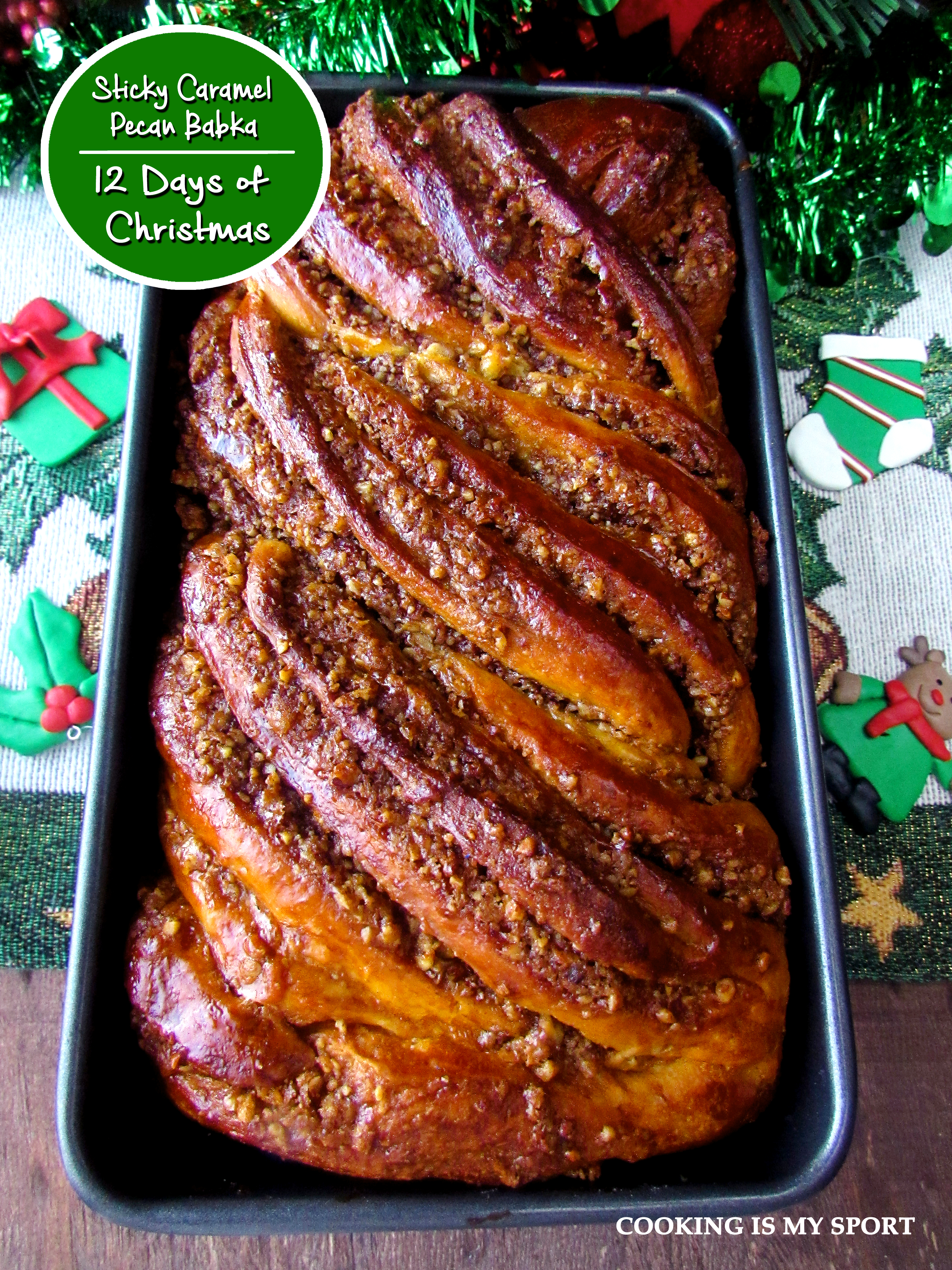 The Day 5 post of the 12 Days of Christmas series is getting up a little bit later in the day/night for various reasons. I didn’t get off work until later in the evening today, and we’re actually in the process of moving to a new place this week. It’s pretty hectic on my end, but in between work, packing our stuff and moving it to our new place, trying to get my Christmas shopping finished and everything else I’m still gonna try my  hardest to get my remaining posts up in a timely fashion.

Knock on wood I can pull it off. 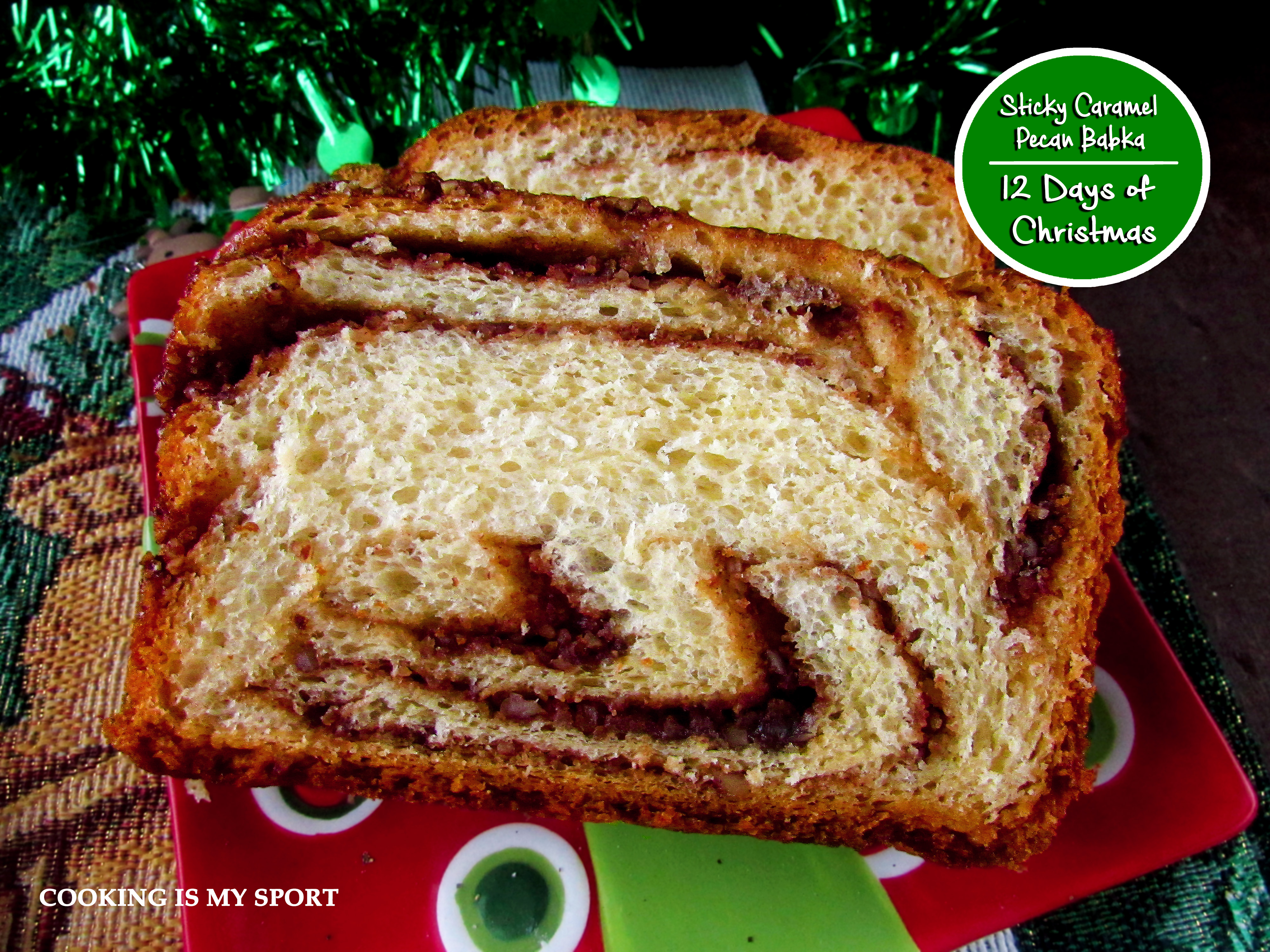 How many people out there have a family tradition of eating a breakfast on Christmas morning? I know plenty of people that do; they wake up early for the kids, open up their presents, then sit down to a breakfast of cinnamon rolls, breakfasts casserole, omelettes or something else like that.

We don’t. We never really have actually.

In my family, me and my sisters did always wake up early, then wake up the adults early so we could open our presents. We were blessed kids. My grandpa- I mean, “Santa Claus”- always made sure that that process took a pretty long while. By the time we finished, my mom and grandma would give us something small to eat like some toast or fruit while they started cooking for Christmas dinner. 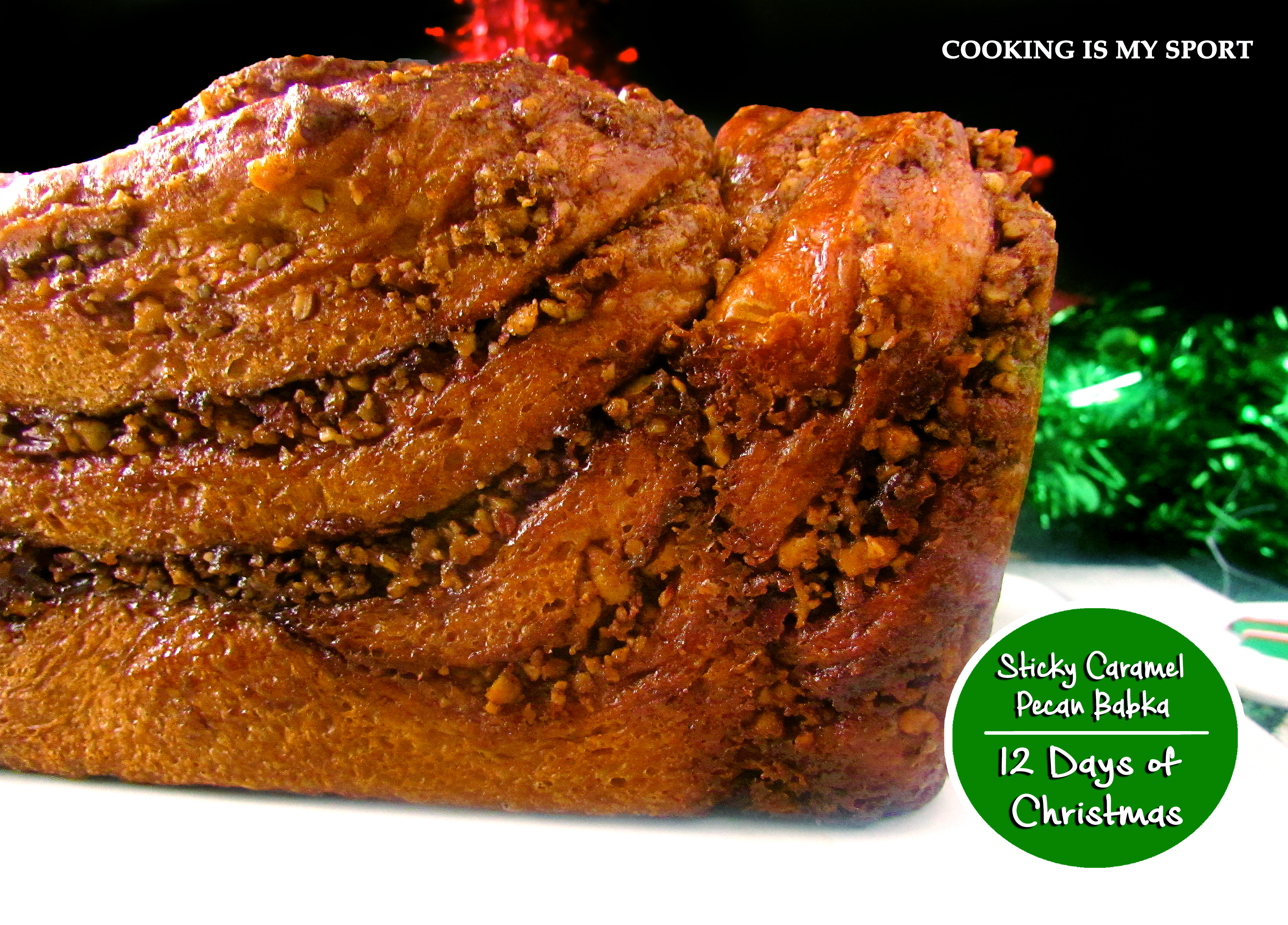 Hold onto your butts.

I’m about to blow that old Aunt Margaret’s Christmas morning cinnamon roll recipe that you’ve been eating for years clear outta the water. You’ll forget what you ever saw in that breakfast casserole, frittata or whatever. This Christmas, I predict that you Christmas Breakfast/Brunch eaters will be consuming something else. 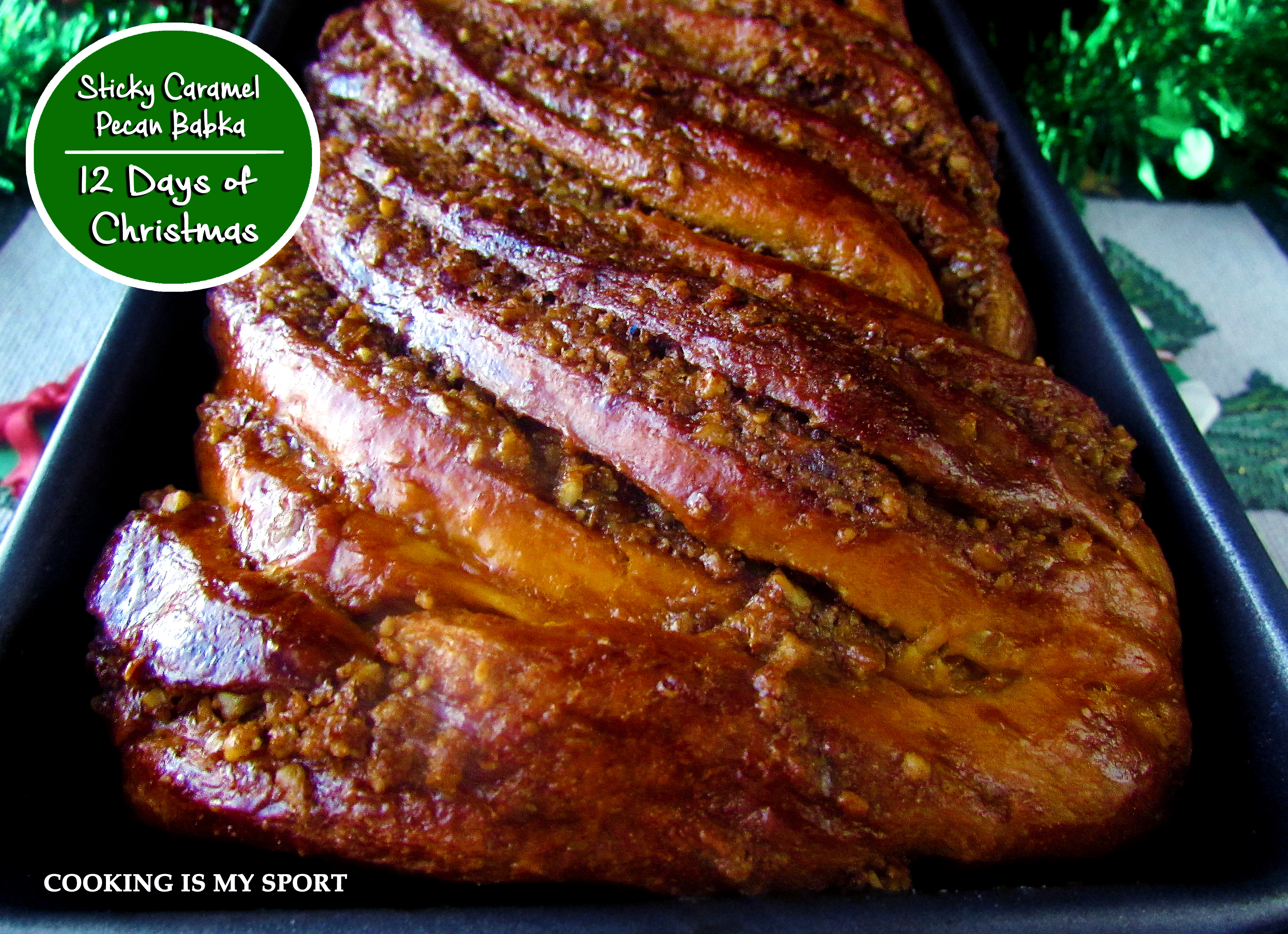 And yes. It tastes every bit as delicious as it looks. 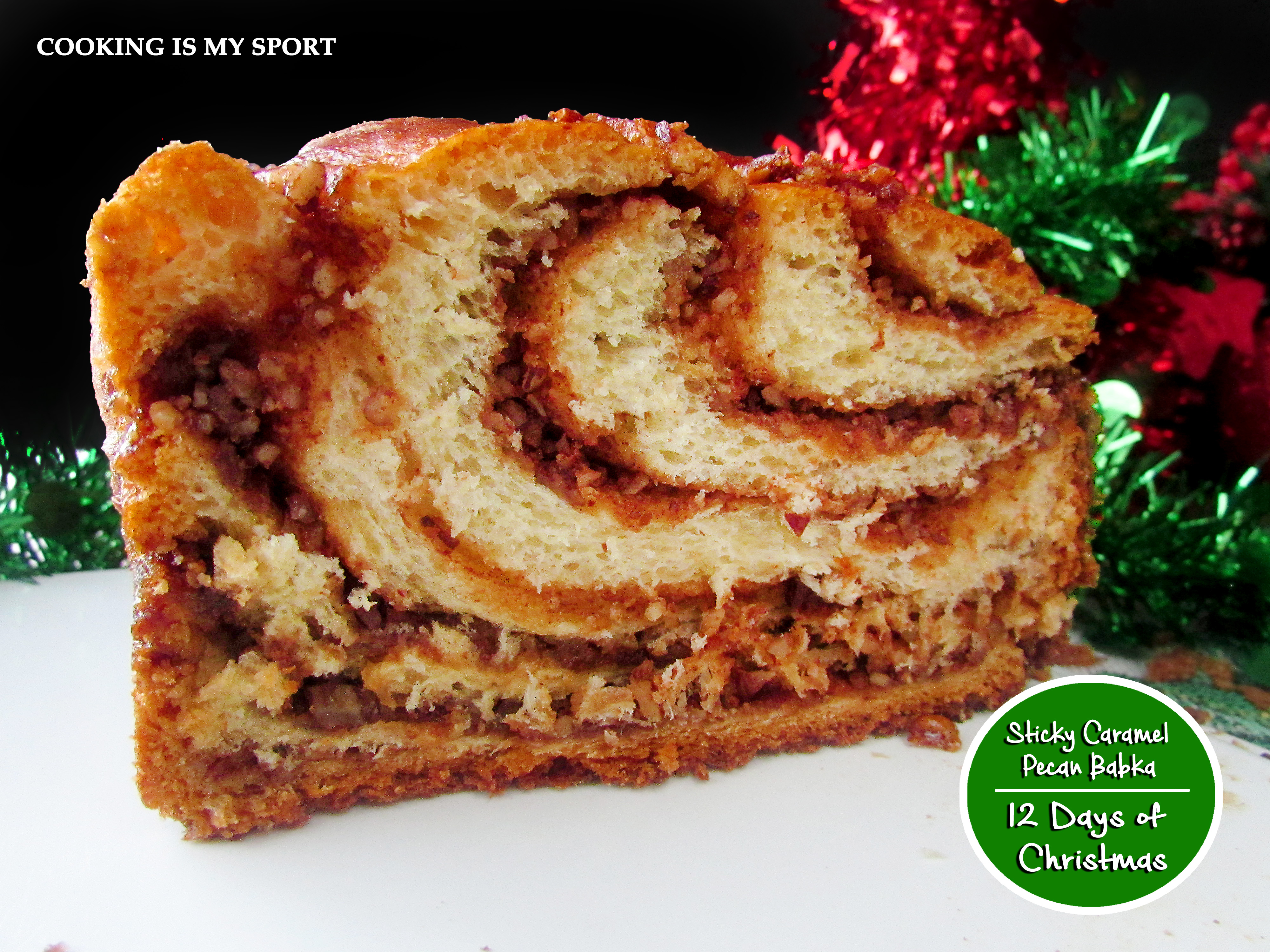 I’ve wanted to make babka for a really long time. A REALLY long time. I think it’s the swirls that got my attention in the beginning- those lovely swirls in the dough have been calling my name, just daring me to pull them off.

A special recipe like this calls for a special occasion, and the 12 Days of Christmas sure counts in my book. For you guys, I think you should put it into consideration for your Christmas breakfast/brunch. 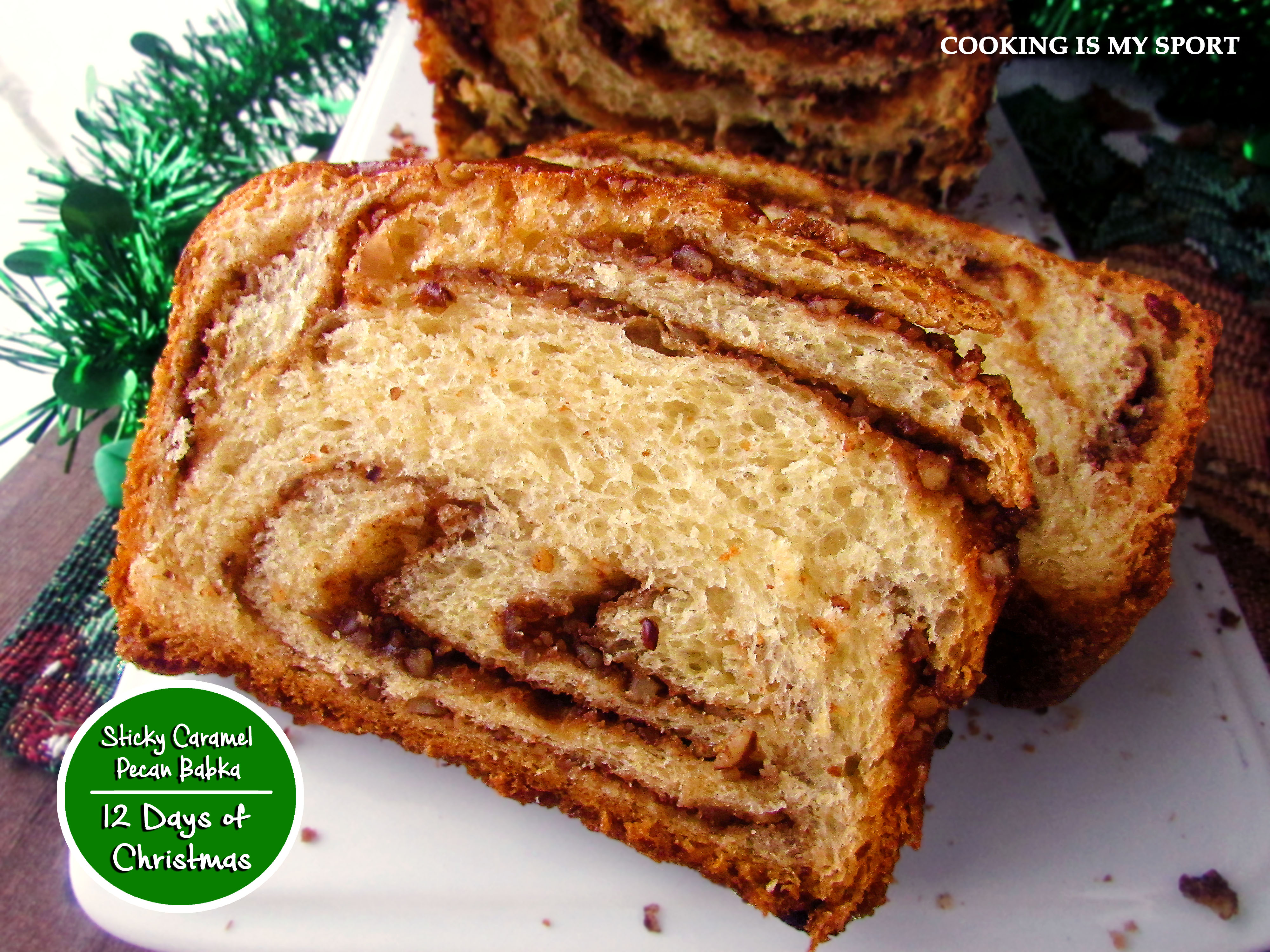 First off, she’s just GORGEOUS, isn’t she? Before you even slice into it, you can see the lovely swirled braid of the dough across the top. You guys may not be able to tell but the overlap of brown and gold across the top is actually a crunchy caramelized sugary crumble that bubbles up and crystallizes on top and forms a gooey sticky goo on the bottom. On the inside is a beautiful swirl of a pecan dark brown sugar filling.

In all seriousness, this has to go up there with one of the best recipes I’ve ever baked. I don’t say that lightly.  It really is.

You want my advice? Bake this baby up the night before Christmas. Then, serve up thick, buttery  toasted slices of it to your family. OR, even better: make French Toast out of it.

They may just forget all about the actual presents underneath the tree and just ask for this recipe instead. 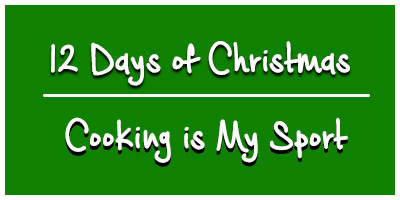 Recipe Courtesy of The Kitchn

For the egg wash:

Combine the water and the yeast in the bowl of a stand mixer, and let stand until the yeast is dissolved. Add the milk, eggs, yolk, sugar, salt, and vanilla extract, and whisk until the yolks are completely combined. Add 6 1/4 cups of flour and stir with a stiff spatula until a shaggy, floury dough is formed.

Using a dough hook, knead on medium-low speed until the dough comes together and is no longer floury, about 5 minutes. With the mixer still running, begin adding the butter in 1-tablespoon blobs. Mix until one blob is just barely incorporated before adding the next blob.

Transfer the dough to your largest mixing bowl. Cover and let rise for 1 to 1 1/2 hours, until doubled in bulk. Transfer to the fridge and chill for at least an hour or up to 3 days. (This makes the dough easier to roll out in the next step; I recommend letting the dough chill overnight.)

When you’re ready to shape the loaves, prepare the filling before you take the dough out of the fridge. Heat the oven to 350°F and toast the pecans until they’re a few shades darker and very fragrant, about 10 minutes. Transfer the hot pecans to a cutting board and chop them finely while still warm. Keep chopping until no piece is larger than a grain of barley. You can also do this in a food processor — process the nuts in pulses and be careful of over-processing (which will turn the nuts into nut butter!).

In a medium bowl, mash together the softened butter, brown sugar, and cinnamon for the filling with a fork or a spoon, then work in the nuts. Keep mashing and mixing until the nuts are evenly distributed and you have formed a crumbly paste. Set this near your work surface.

Line three 8×4-inch loaf pans with long rectangles of parchment, so that the parchment hangs over the sides of the pan. Grease the pans thoroughly with non-stick spray. (If you only have two pans, bake two loaves and leave the third piece of dough in the fridge to shape and bake later.)

Remove the dough from the fridge. Sprinkle your work surface generously with flour and scrape the dough out on top. Pat the dough into a log and then use a bench scraper or sharp knife to cut it into 3 equal pieces (mine were about 21 ounces each, if you feel like weighing).

Sprinkle the work surface with a little more flour, then set one of the pieces of dough on top. Use the palms of your hands to press it into a rough rectangle shape. Rub a little flour into a rolling pin and roll the dough out into a thin rectangle, roughly 10 inches wide and 12 or more inches long (the thinner you roll, the more layers you’ll make).

Scatter a generous cup of the filling over the surface of the dough, then use the back of a spoon to spread and press the filling into an even layer. Leave about an inch of clear border at the top.

Starting with the short end closest to you, carefully roll the dough into a log. If any filling falls out, just tuck it back in. If the dough sticks to the counter, use a bench scraper to gently pry it up. When done rolling, pinch the dough to seal it closed. Dip a very sharp knife in water and gently, but swiftly, slice the log down its entire length, creating two halves with lots of layers.

To form the babka loaves, turn the halves so that the layers are facing up. Press the two halves together at the top, then twist the halves around each other, creating a spiral. Press the halves together again at the bottom. Flour your hands and lift the loaf into the loaf pan. If the loaf is a little too long for the pan, just smoosh it a little on either end to make it fit — any gaps will be filled in by the rising dough.

Repeat with the other loaves. Cover the shaped loaves and let them rise on the counter until puffy and just starting to dome over the tops of the pans, 1 to 1 1/2 hours.

About a half hour before baking (when the loaves are puffy but not yet domed), preheat the oven to 350°F.

When the loaves have risen, whisk the yolk and the milk together to make the egg wash and gently brush it all over the surface of the loaves. Transfer the loaves to the oven and slide a baking sheet underneath to catch any syrupy drips. Bake 45 to 55 minutes — cover the loaves with foil in the last 10 to 15 minutes if the edges look like they might be starting to burn. The loaves are done when deep glossy brown and a skewer inserted in the middle comes out clean of any dough (sticky goo is ok, though!). If you want to check the temperature, the loaves should be around 200°F in the middle.

Let the loaves cool in the pan for about 20 minutes to firm up — however, don’t let them sit for much longer or the caramel will harden and it can be hard to get the loaves out of the pan.