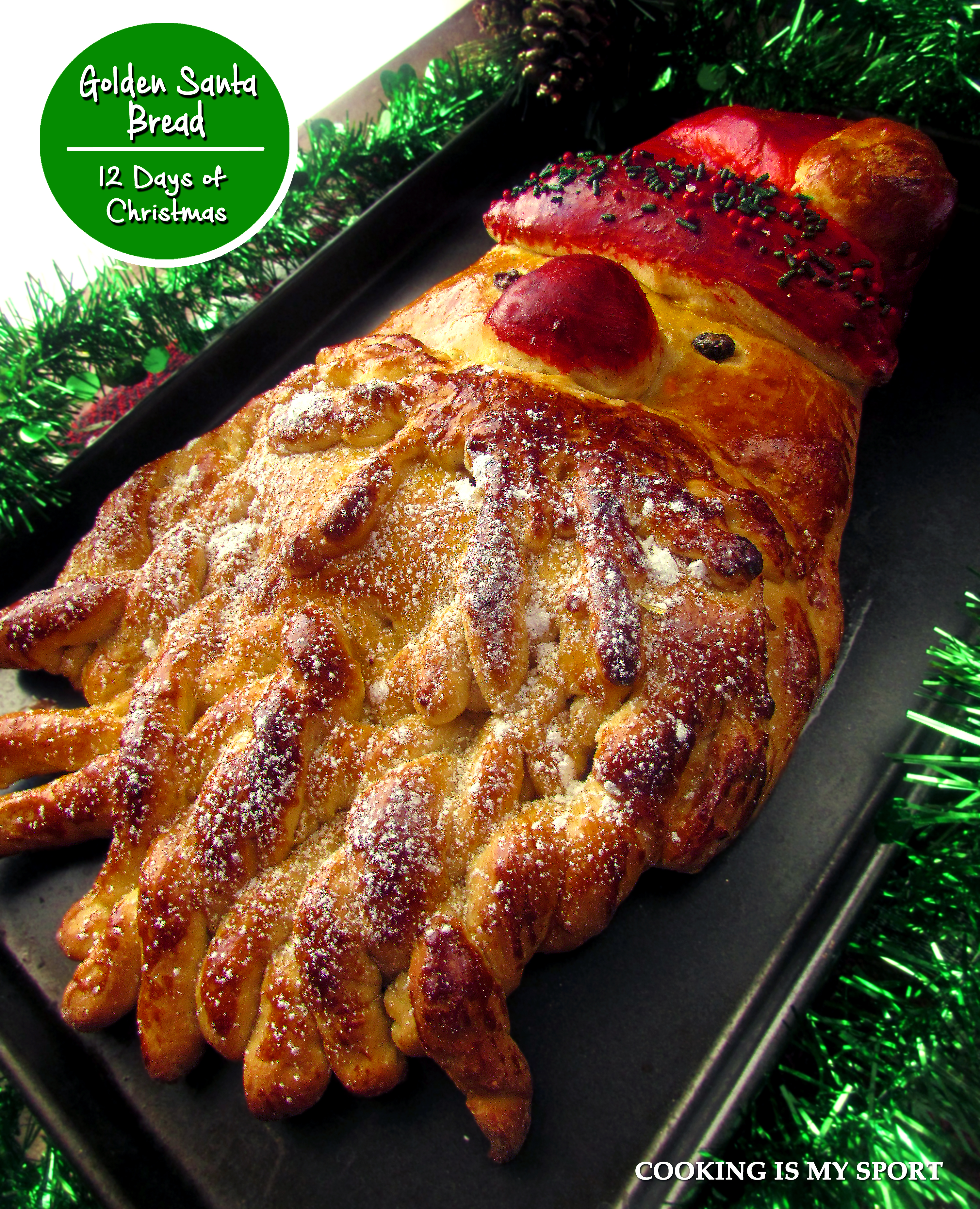 I know that we officially closed out the 12 Days of Christmas series a few days ago but I still wanted to take one last opportunity to throw out a great big Happy Holidays to all of you and your families whatever it is that you’re celebrating. Please rest up, cook lots, eat more, give a bunch, and above all, have fun.

Thanks for tuning in with me for the Christmas goodies series. I hope you got a chance to try some of them out, or at least get to bake up some of your own. And as an added bonus, I thought that I would throw out one extra recipe for ya. I initially was going to just discard this post as an unnecessary extra on the “cutting room floor”, but then I thought, “Hey, it’s Christmas, I can’t cut Santa!” and decided to just make it a bonus recipe instead.

Would you be surprised to know that this entire beautiful thing is made of  a delicious, slightly sweet golden egg bread? Not only that, it really isn’t as hard to make as it looks. It’s a great way to show off to all the family when you bring it out to the table and who doesn’t love to do that?

Well, that’s a wrap for me. I’m off to chill and listen to Christmas carols.

Have an AWESOME holiday you guys 🙂

Recipe Courtesy of Taste of Home

In a large bowl, combine 2 cups flour, sugar, yeast and salt. In a small saucepan, heat milk, water and butter to 120°-130°. Add to dry ingredients; beat just until moistened. Beat in eggs until smooth. Stir in enough remaining flour to form a stiff dough.

Turn onto a floured surface; knead until smooth and elastic, about 6-8 minutes. Place in a greased bowl, turning once to grease top. Cover and let rise in a warm place until doubled, about 1 hour.

Preheat oven to 350°. Punch dough down. Turn onto a lightly floured surface; divide into two portions, one slightly larger than the other.

Shape the larger portion into an elongated triangle with rounded corners for Santa’s head and hat.

Divide the smaller portion in half. Shape and flatten one half into a beard. Using scissors or a pizza cutter, cut into strips to within 1 in. of top. Position on Santa’s face; twist and curl strips if desired.

Use the remaining dough for the mustache, nose, hat pom-pom and brim. Shape a portion of dough into a mustache; flatten and cut the ends into small strips with scissors. Place above beard. Place a small ball above mustache for nose. Fold tip of hat over and add another ball for pom-pom. Roll out a narrow piece of dough to create a hat brim; position under hat.

With a scissors, cut two slits for eyes; insert raisins into slits. Let rise lightly covered with plastic wrap in a warm place for a further 30-40 minutes.

28 thoughts on “Merry Christmas to All (and a Happy New Santa Bread)!”