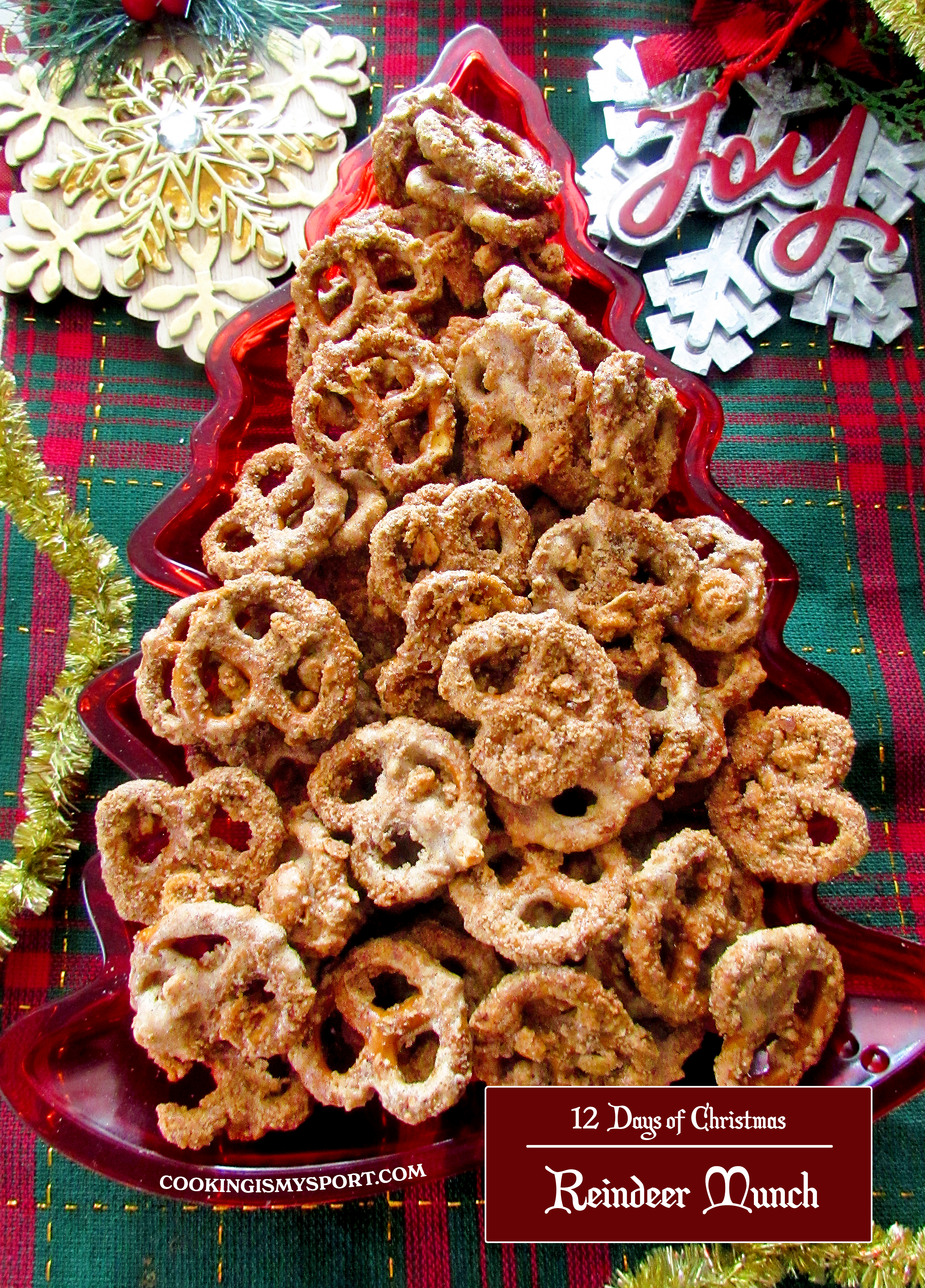 For me, the holidays are about flavors AND smells. There’s a saying that goes something along the lines of “You eat with your eyes first,” and that’s true. But you also first eat with your nose too. There are some foods where the second that their smell hits my nostrils, I can already half taste them in my mouth. 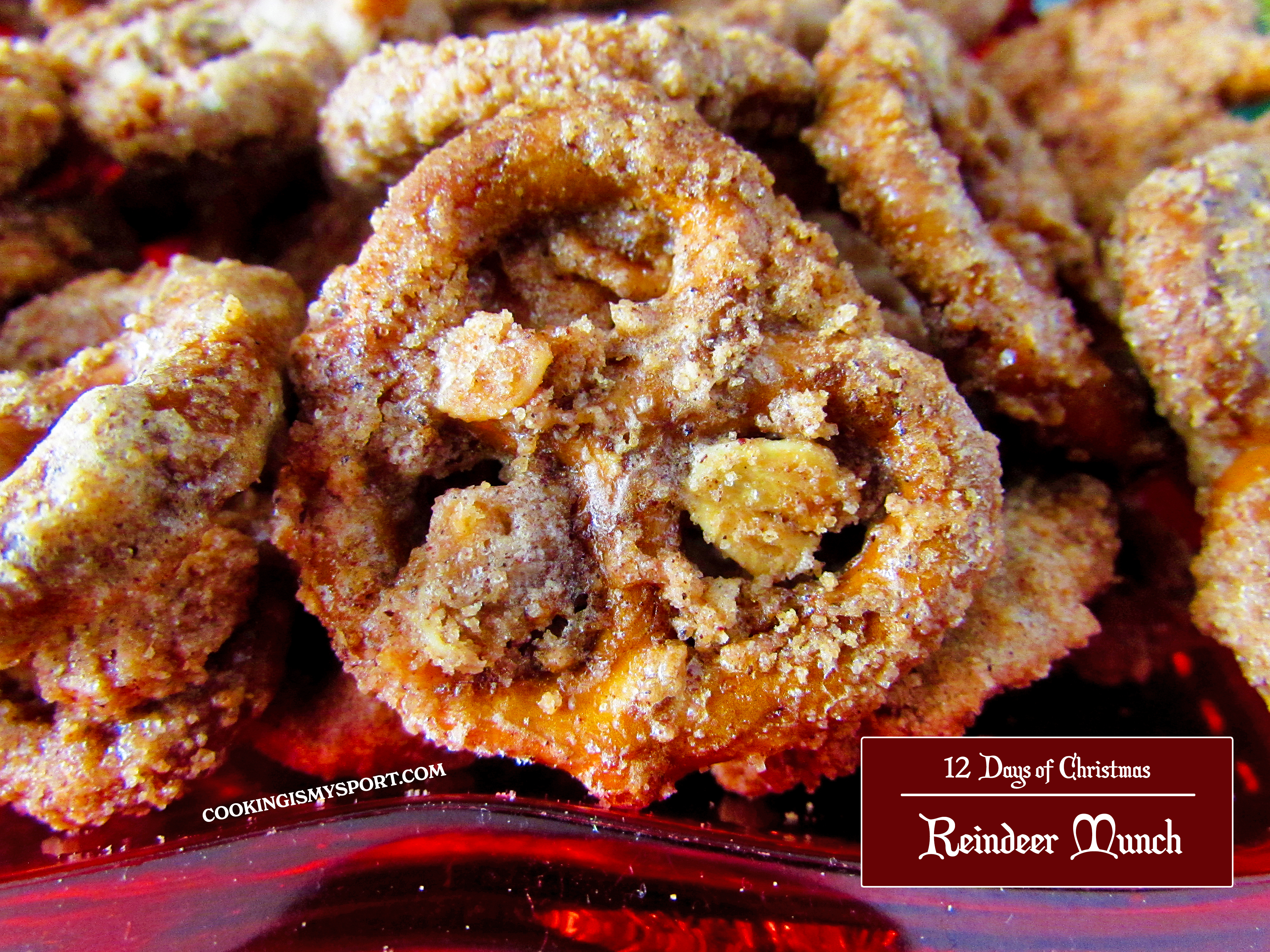 It’s (obviously) been a long tine since I’ve been in a mall, but one of the few times of year I always used to like going to them was the holidays. Not so much to shop til I dropped, but mostly because if any of you have ever walked through a mall during the holiday season, then there is a certain smell that you’re going to be able to recognize. 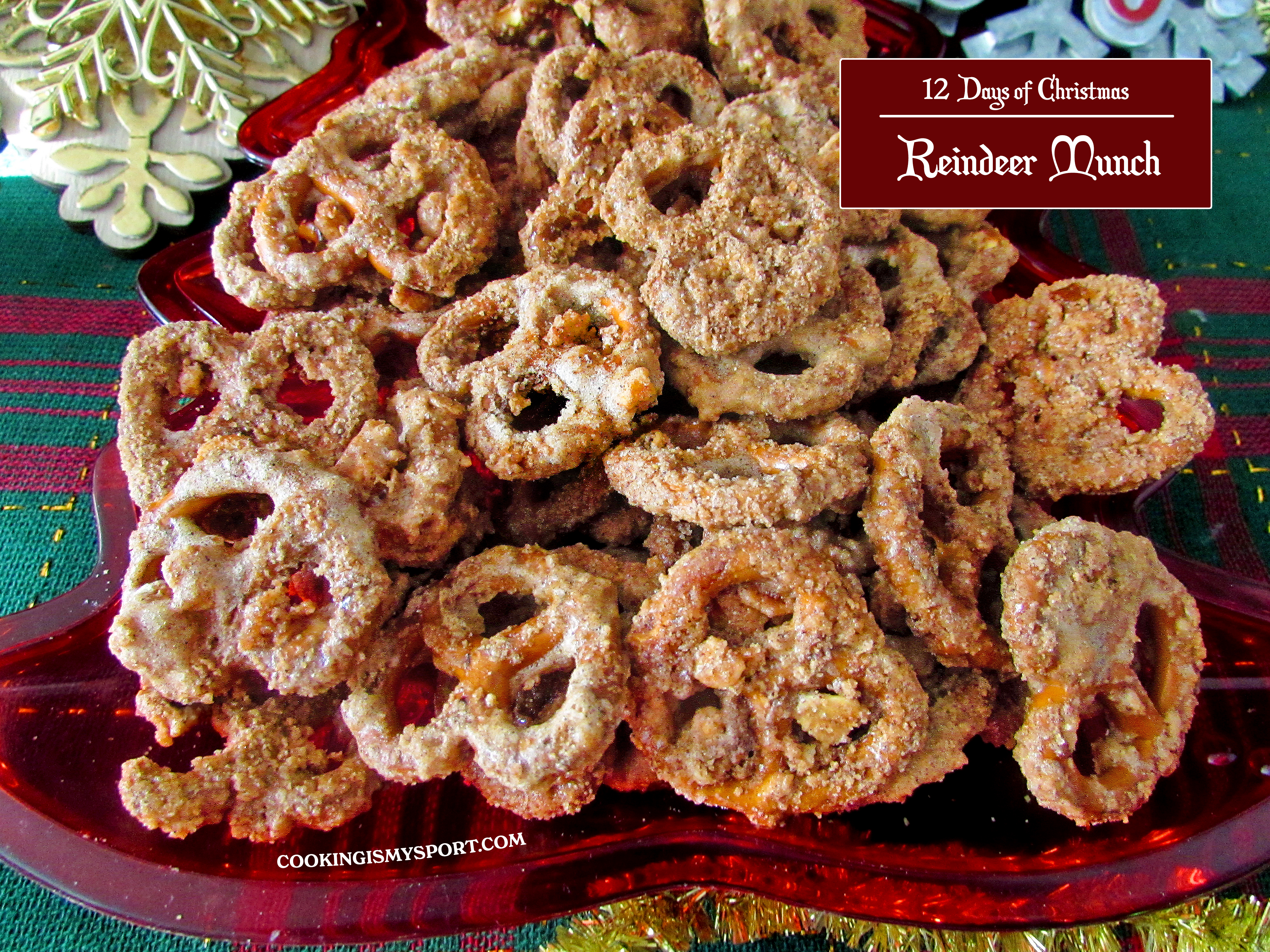 The spiced nuts kiosk. In just about every place I’ve lived and every mall I’ve visited during the holidays, there’s a local vendor who rents out a booth/kiosk for the season to sell spiced/sugared nuts. Most of them have a tabletop stove contraption thingy that lets them make the nuts right there for you to see. It makes the most wonderful smells. I would get them in a candle if I could. Bath and Body Works should really consider it. 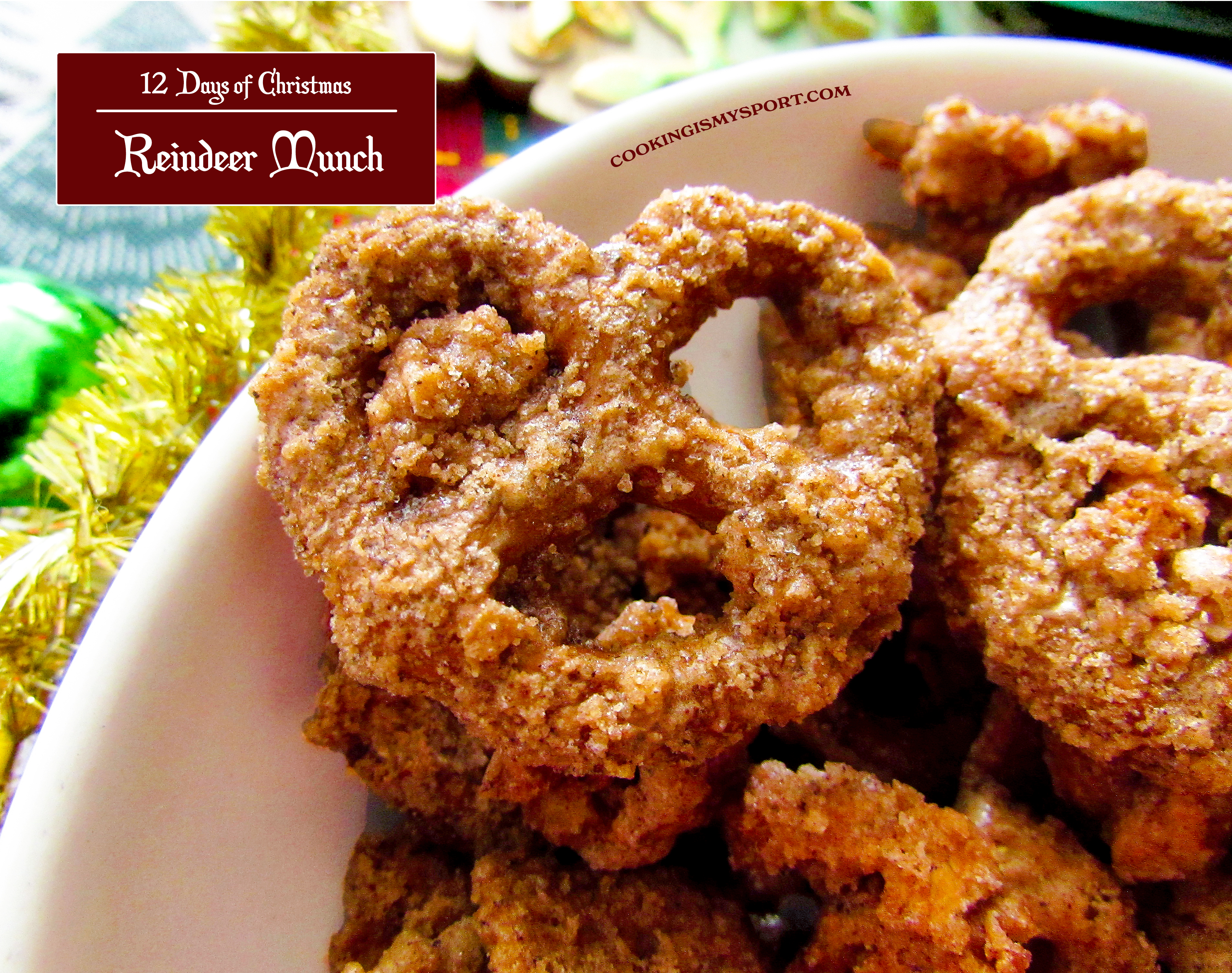 What does that have to do with today? Well I was trying to think of a snack recipe to include in the series and I started thinking about how the spied nuts kiosk. Nuts are a pretty pricey ingredient, so although I wanted to do a spiced nuts post, I wanted it to be a bit more accessible for those who may not want to splurge on buying them in bulk. Plus, I’ve just always been curious as to how spiced nuts were made. You can find practically any answer to any question you have through Google; so here we are. 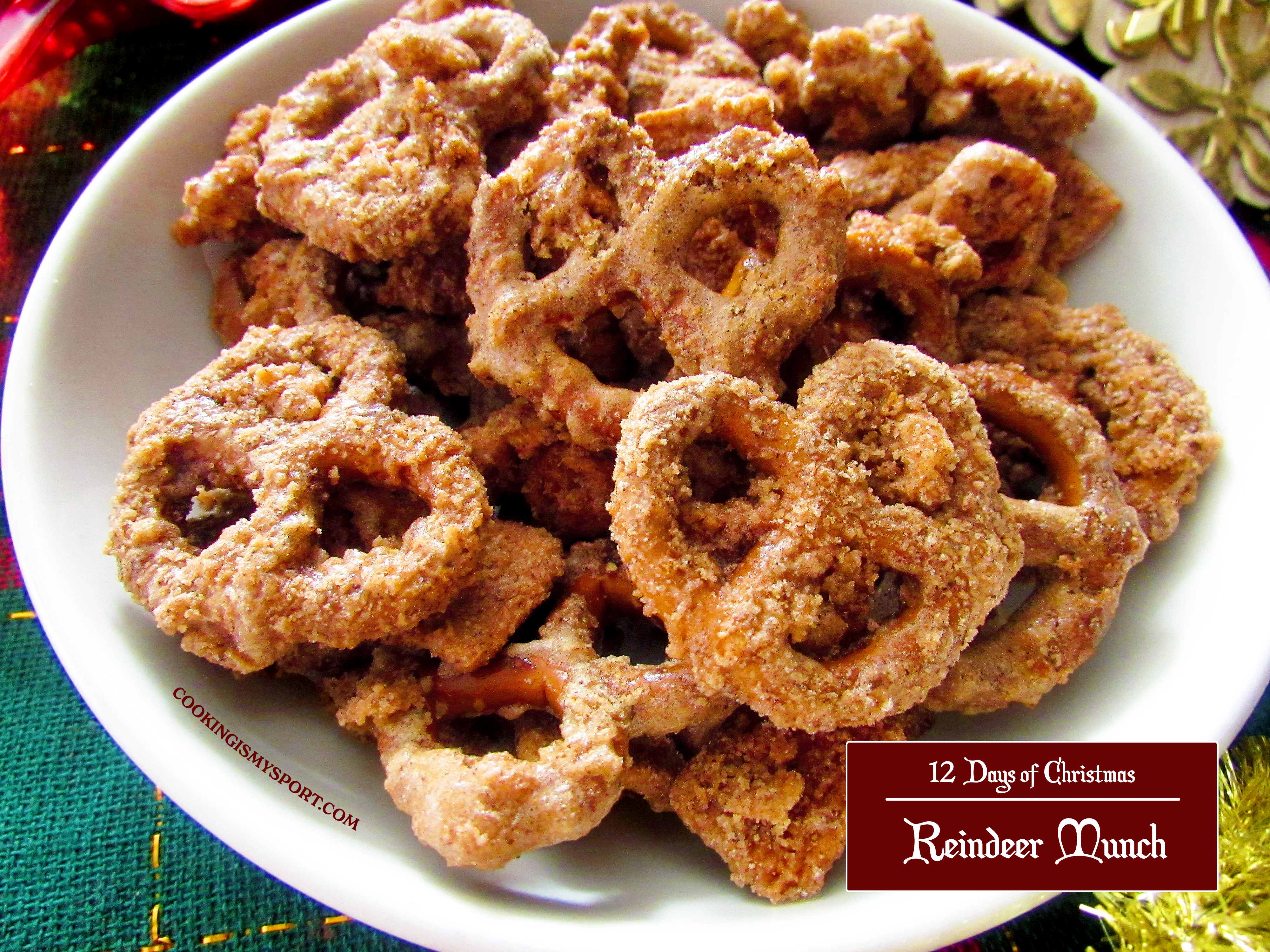 Turns out, you don’t need one of those stovetop spinning contraption thingy things to make your own spiced nuts. Your oven will do the job just fine. The process is actually pretty simple. The sugary crusty coating comes from beating egg whites and water together, then folding in sugar. That gets poured over your ingredients, then they get baked off until crisp. Because the coating is so sweet, I wanted to use something salty that would offset the sweetness, balance out the flavors together, and also be sturdy enough to hold the topping. Enter in pretzels. I added in a little bit of cereal to play with different textures; the recommendations I give in the recipe are personal preferences. Feel free to use whatever cereal you like. Finally, I added in a little bit of dried fruit that would provide a tart, tangy flavor to balance out the sweet and salty. 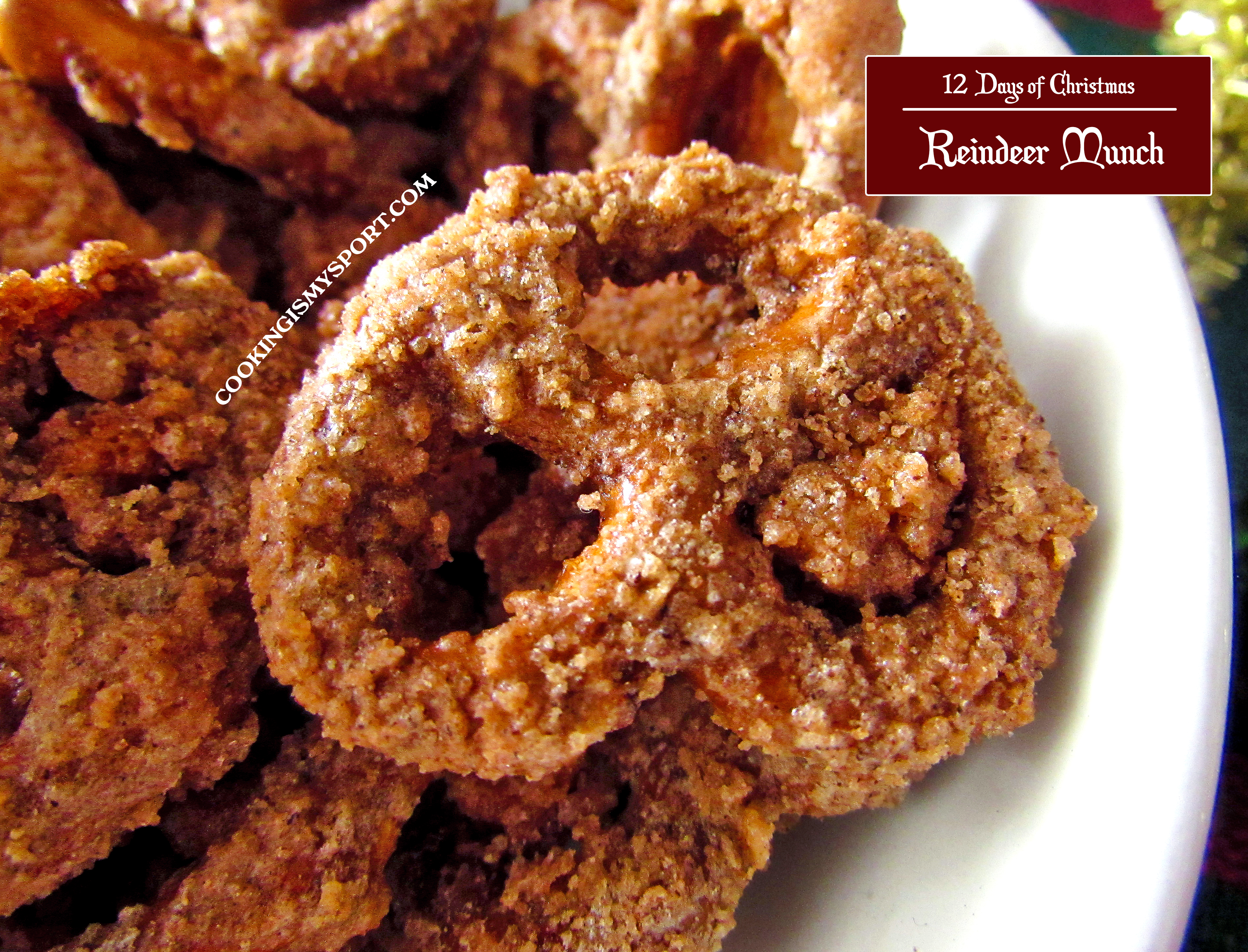 I realized that this was going to be delicious when it was in the oven baking and my house smelled like a mall during the holidays. This stuff is dangerous. Bag it up and give it away as gifts and stocking stuffers, or there’s an excellent chance you’ll stand over the stove, munching on handfuls. Like I did.

We’re officially halfway through the 12 Days of Christmas! Be sure to check out the other recipes that have been shared on the blog and get that holiday baking in while you still can.

Preheat oven to 300 degrees Fahrenheit. Line two large baking sheets with parchment paper and spray it generously with non-stick cooking spray; or you can use a silicone baking mat. Set them aside.

Mix pretzels, cereal and nuts together in a large bowl. Set aside.

Using a handheld mixer, beat egg whites and water together on medium speed until stiff peaks form, about 4-5 minutes. Add the sugar, spices and salt, gently folding until combined.

Pour/spoon mixture over the pretzel- cereal-nuts mixture and stir to coat it completely. Spread them over the baking sheets and bake for 45 minutes, stirring every 15 minutes.

Allow to cool completely. Stir in the dried fruit. Store at room temperature in an air-tight container or a resealable plastic bag.