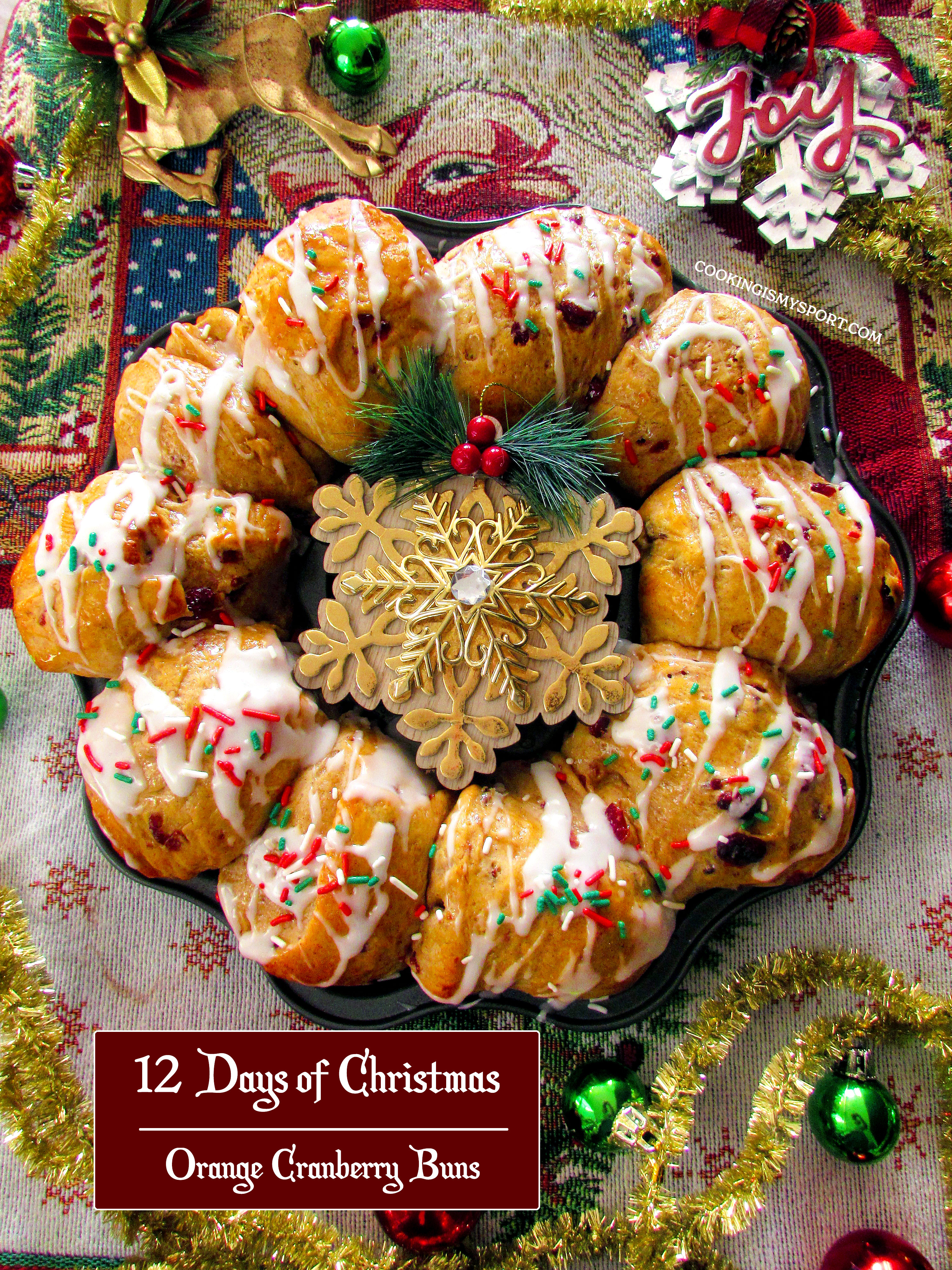 Well, it’s about that time of year again, y’all.

The 12 Days of Christmas. 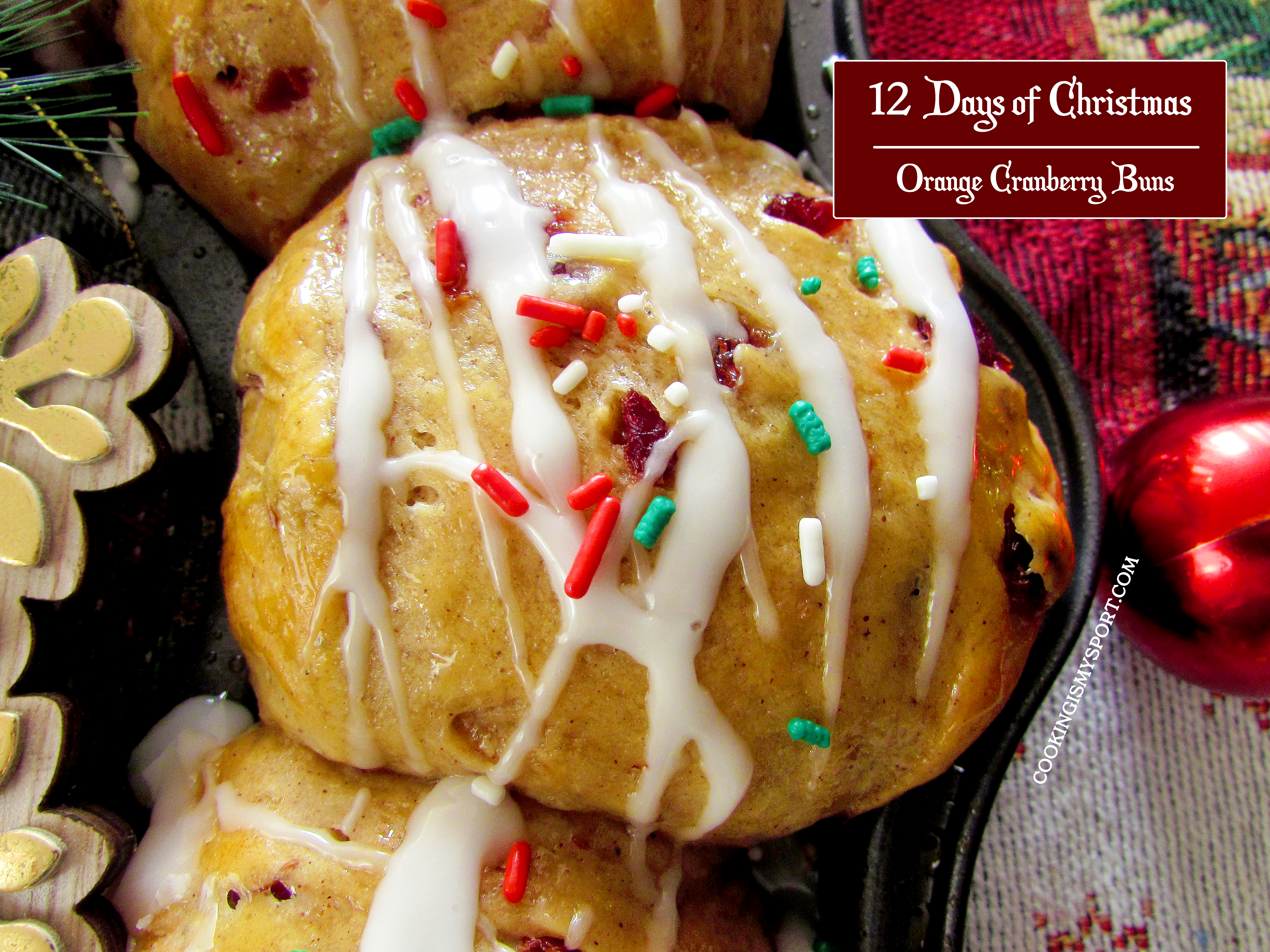 If you’ve been following my blog for a while, you’ll know that every year I set aside twelve days during the month of December (and sometimes one or two days in late November) for a series of holiday themed recipes. I grew up in a household where Christmas baking was a yearly and very dearly loved tradition. It put a sprinkle of extra Christmas spirit on my childhood that I’ve never lost a nostalgia for, and now that I’m an adult I find that I still feel that nostalgia when I bake myself for Christmas. 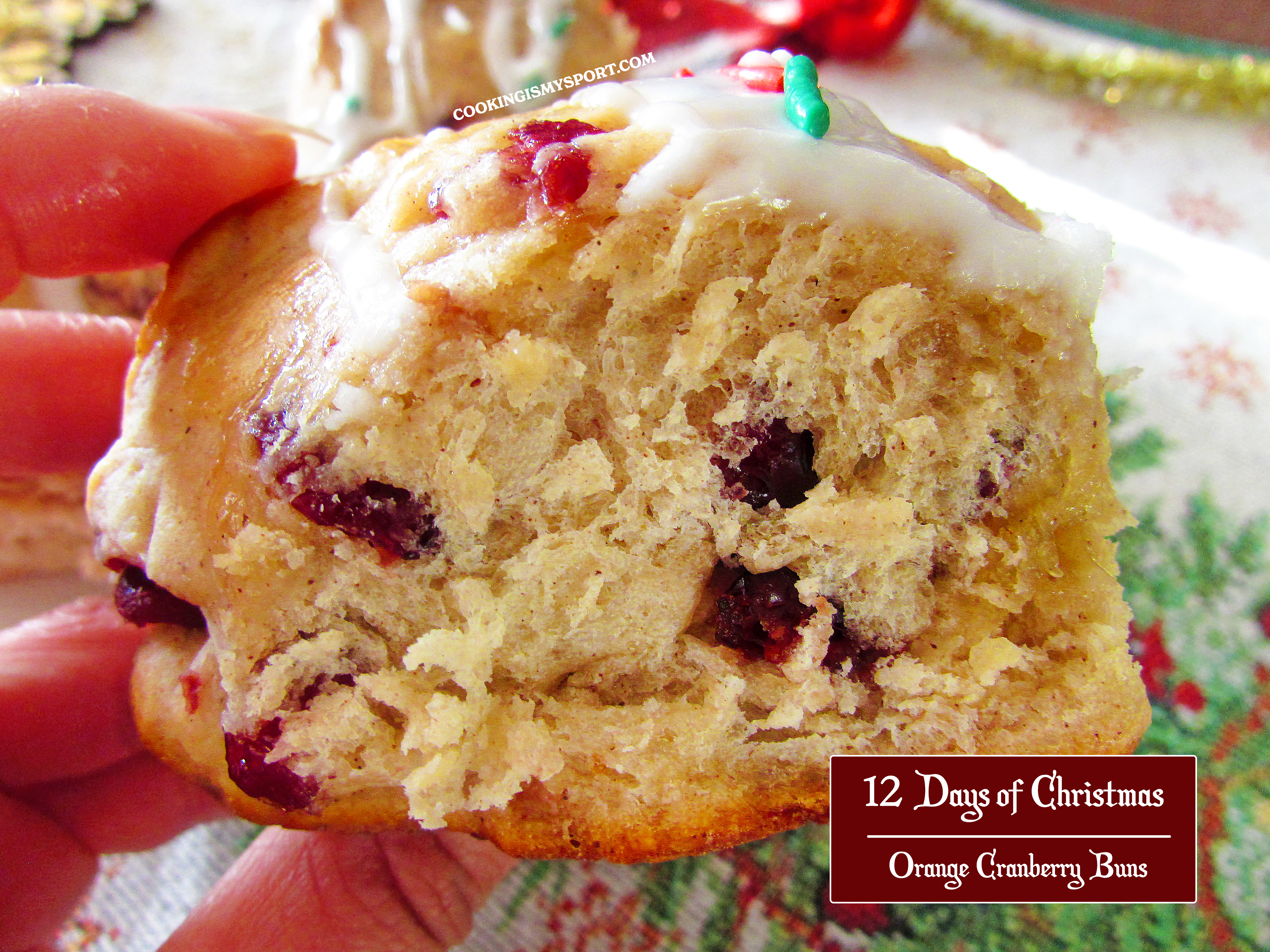 Late 2019 I took an unexpected blogging hiatus, and it was the first and only time in the nearly seven years I’ve been food blogging where I didn’t do a 12 Days of Christmas. It was a huge mistake. Christmas wasn’t the same for me at all without my holiday baking and I made a promise to myself at New Years that come what may, I was going to resume blogging AND resume the 12 Days of Christmas come holiday season 2020.

I’m a girl who keeps her promises. So here we are. 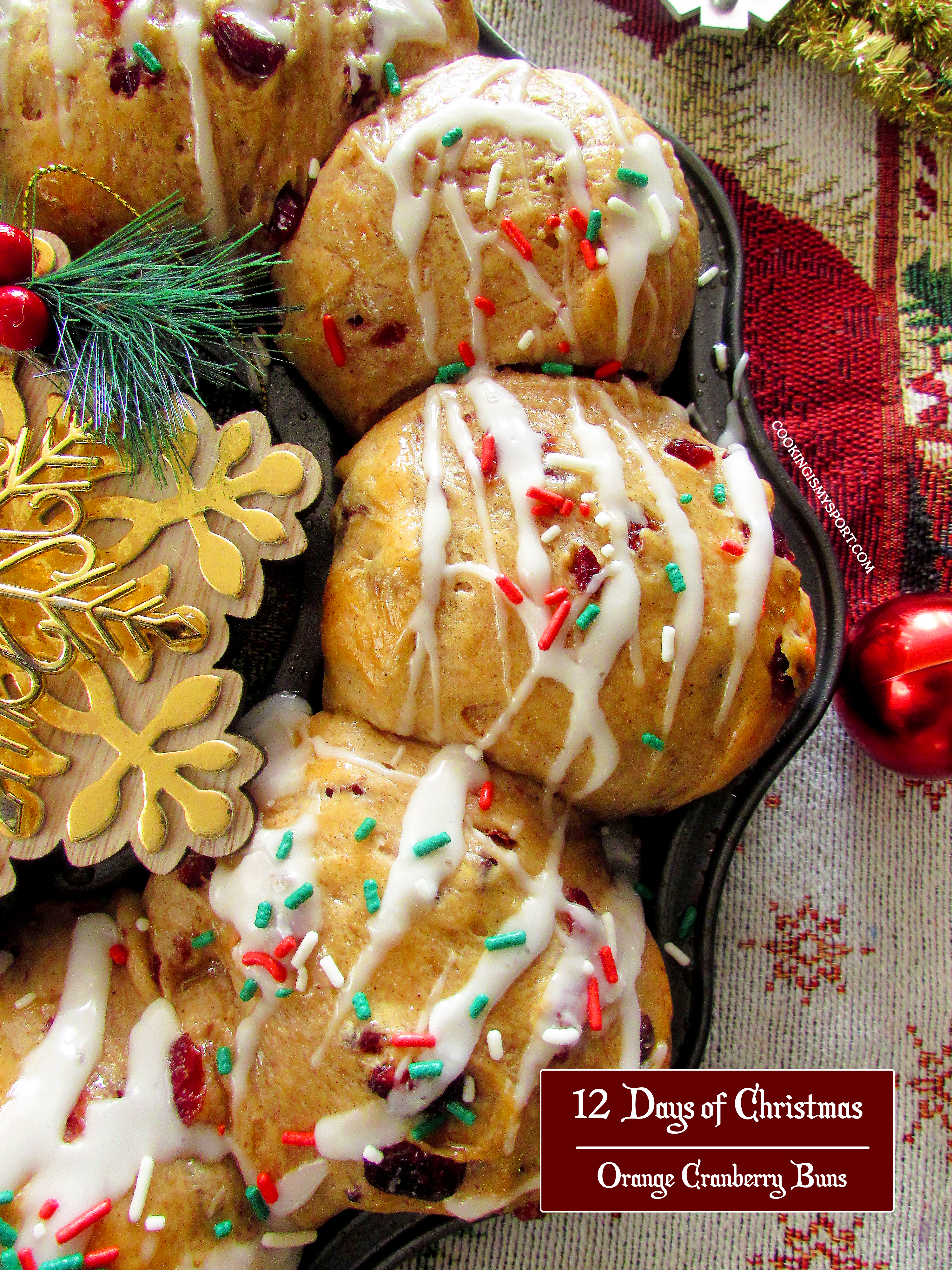 I’m kicking off this year’s series with bread. I bought a wreath-shaped baking pan that I wanted to try out and the holiday season seemed a pretty perfect occasion to break her in. Bear in mind though, you defintely don’t need a wreath shaped pan to bake these. You can always bake them on a pizza stone, or a large baking sheet and arrange them in a wreath shape. You could also just bake them in rows in a regular baking pan. I promise, it won’t affect the taste. 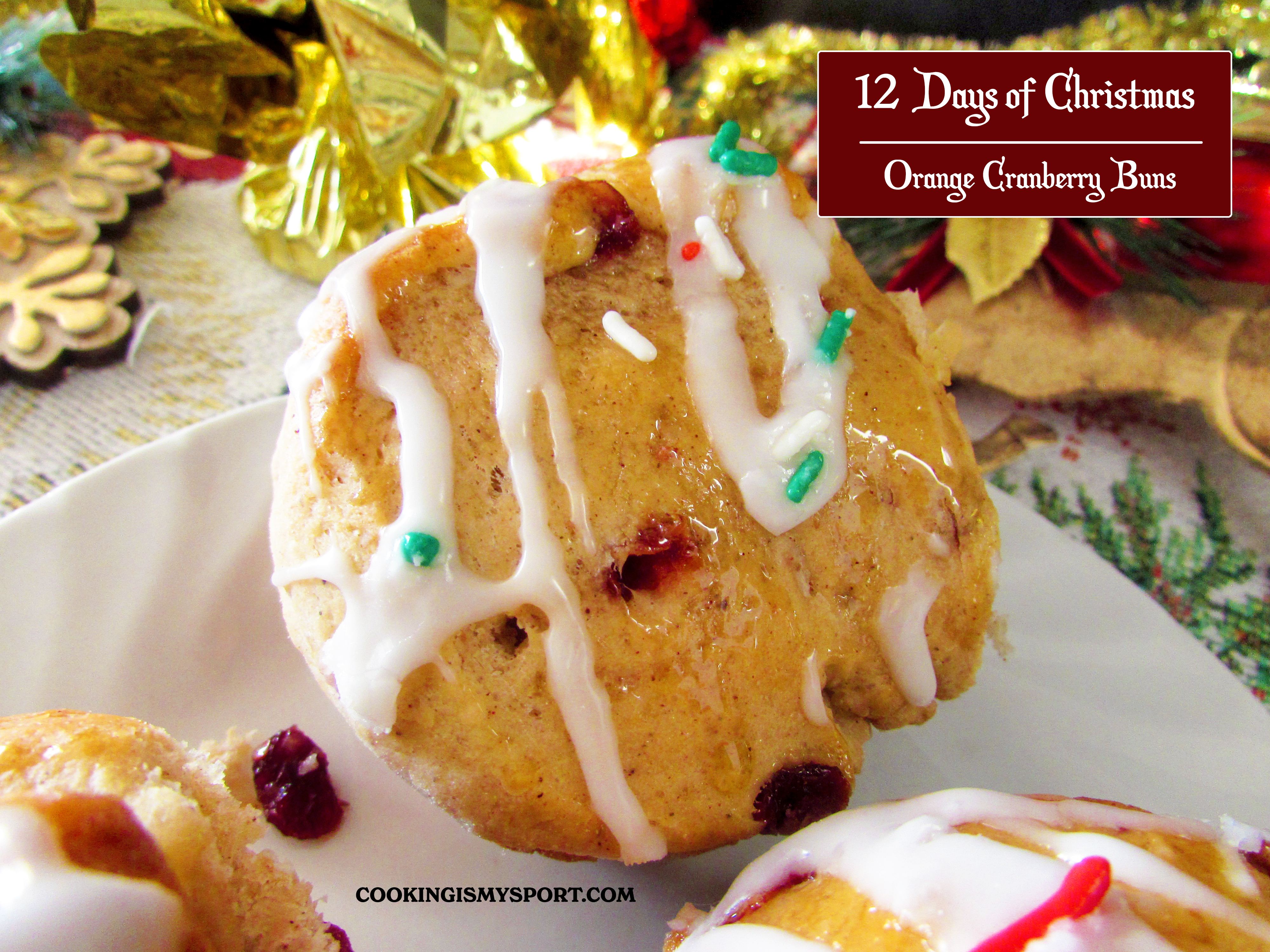 Orange and cranberry taste like Christmas to me. This dough is flavored with both, along with a warm holiday spice mix. After baking, I brushed them with an orange honey glaze, then after the glaze had set, drizzled on an orange icing.

Don’t they look festive? A pretty good way to start 12 days of Christmas goodies, if I may say so myself.

Recipe Adapted from Bake from Scratch

In a large bowl, combine dried cranberries and warm orange juice. Cover with plastic wrap, and let stand for at least 20 minutes, and up to overnight. Strain, discarding excess liquid.

In the bowl of a stand mixer fitted with the paddle attachment, combine warm milk and yeast. Sprinkle ¼ cup (50 grams) sugar over yeast and milk. Let stand until mixture is foamy, about 10 minutes.

In a large bowl, whisk together 5 cups of the flour, salt, cinnamon, nutmeg, allspice, and remaining ½ cup of white sugar.

With mixer on low speed, add half of flour mixture to yeast mixture, beating just until combined. Beat in melted butter, freshly squeezed orange juice, and 3 eggs. Transfer dough to a large bowl, and gradually add remaining flour mixture, stirring with a spatula or a wooden spoon until a soft dough forms. (Because this is such a large amount of dough, you will need to incorporate ingredients in a larger bowl.) Stir in drained dried cranberries and zest.

*Knead until smooth, about 8 minutes, adding more flour as needed. You may not need to use all of the flour; this varies depending upon the time of year and where you live. (But the dough should not be sticky by the time it’s ready.)

Spray a large bowl with cooking spray. Place dough in bowl, turning to grease top. Loosely cover and let rise in a warm, draft-free place until doubled in size, about 1½ hours.

Meanwhile, make the honey glaze: In a small saucepan, bring honey and orange juice to a boil over medium-high heat. Reduce heat to medium-low, and cook, stirring constantly, until slightly thickened, about 2 minutes. Let cool completely.

Preheat oven to 350 degrees Fahrenheit. Either spray two wreath pans or line a 15-inch round pizza pan or stone with parchment paper, and spray with cooking spray.

Lightly punch down dough, and let rest for 5 minutes. On a lightly floured surface, turn out dough. Divide dough into 18 pieces, and roll each piece into a ball. Arrange balls on prepared pan in a wreath shape, leaving little space in between them. (You don’t have to make a wreath shape at all; these will bake just fine in straight rows as well) Cover with plastic wrap, then a damp kitchen towel and let stand in a warm, draft-free place (75°F/24°C) until puffed and rolls are touching, about 25 minutes. (Rolls will rise to edge of pan/pizza stone, but will not spill over during baking.)

In a small bowl, whisk together milk and remaining 1 egg. Brush tops of rolls with egg mixture.

Bake until golden brown, about 25 minutes. (Bread is done at an inner temp of 190 degrees Fahrenheit) Brush warm rolls with Honey-Orange Glaze. If desired, stir icing ingredients together in a small bowl and then drizzle icing over the buns once glaze had set.