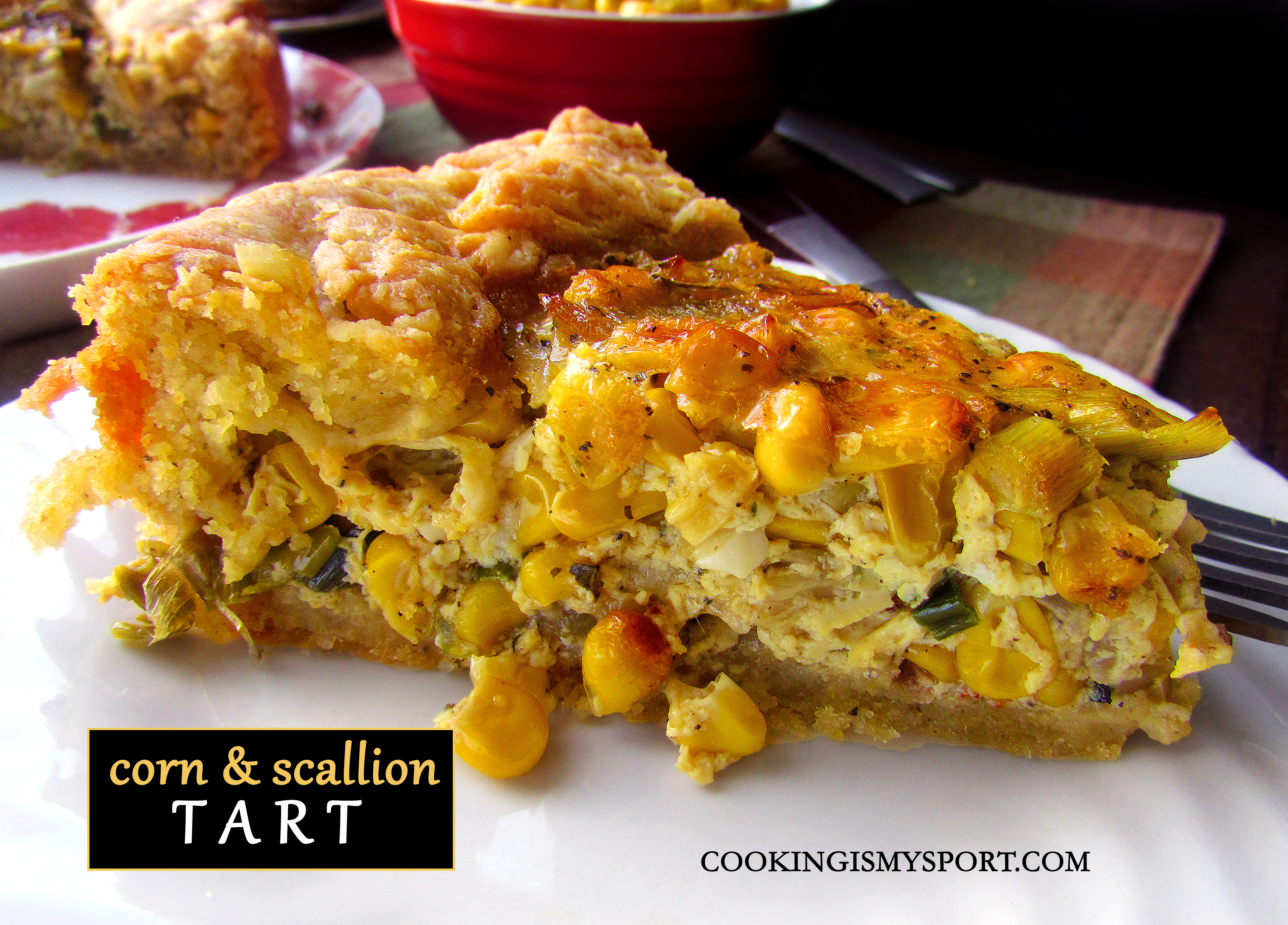 In our house, brinner is something we’ve made a part of our weekly routine. I’m sure most of you are familiar with it, but for those that aren’t, “brinner” is a meal where food that is normally eaten at breakfast time is eaten instead at dinner time. I don’t know why or how, but breakfast food just tastes better to me later in the day. Not only that, regardless of what you want, just about everything is extremely easy and quick to put together. If you haven’t ever tried it before, I really do think you should. 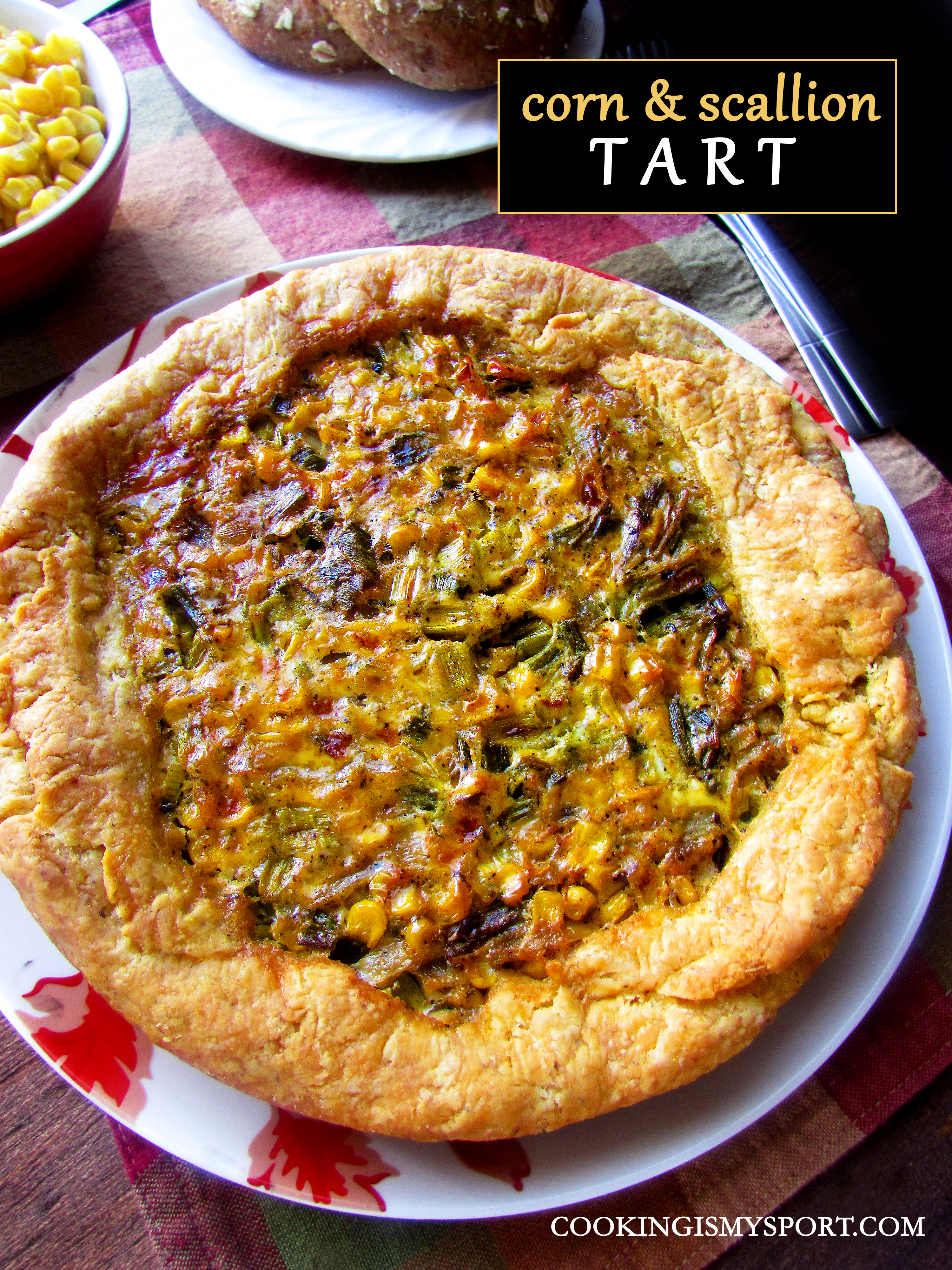 Sausage, bacon and eggs are always on our brinner menu, with some kind of carb to eat with them. The carb varies. Sometimes we just have toast from store bought bread. Sometimes I’ll make a batch of biscuits. Sometimes I make a loaf of bread. We might grab some bagels from Panera. My favorite will always be my one true love (pancakes).

And other times, I like to try something a little bit…different. 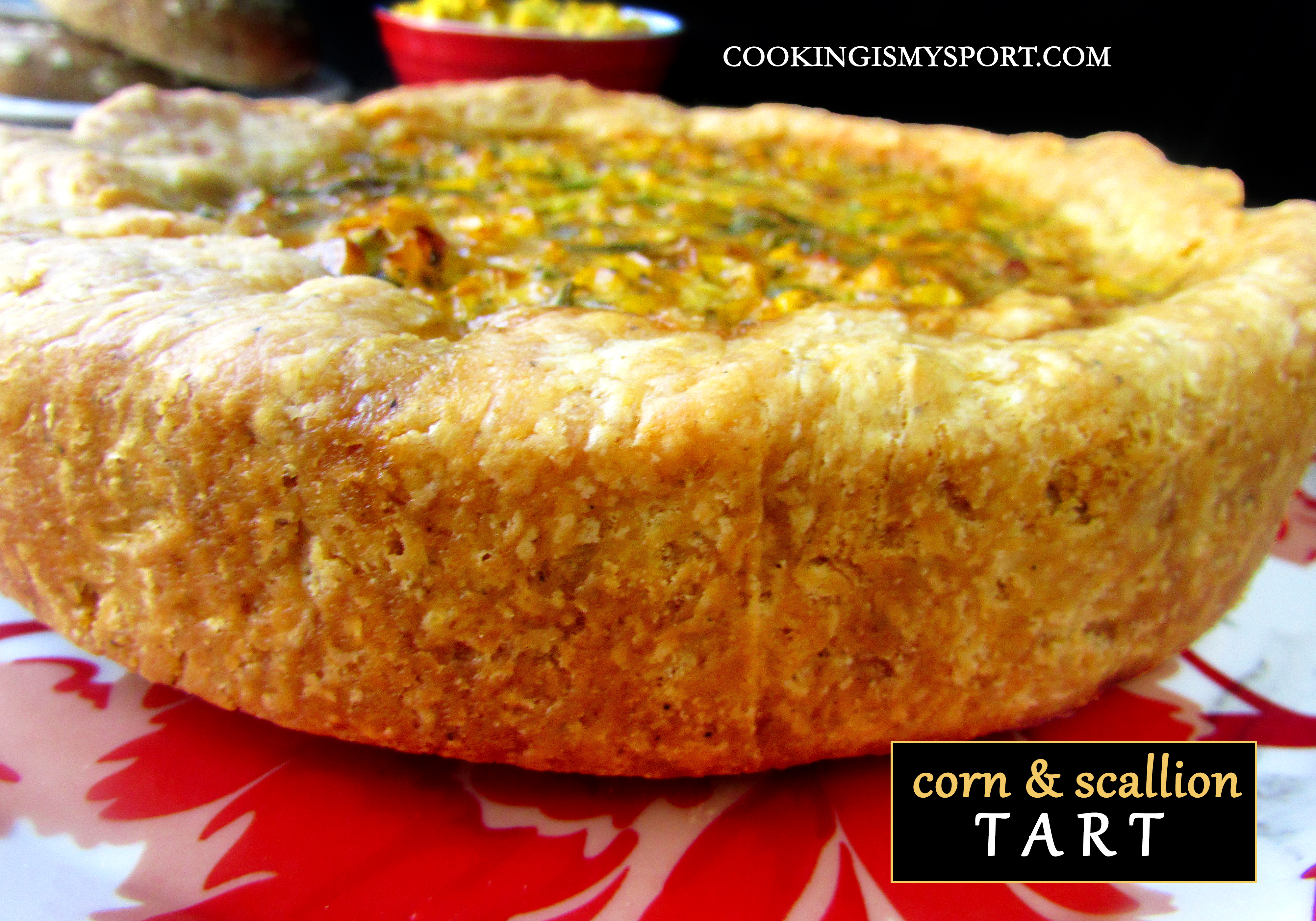 Today’s recipe was something different not just for our brinner menu but for my baking repertoire in general, so I thought it would be nice to share with you guys.

I don’t make a lot of tarts. Not really sure why. I love tarts of just about any kind. I bought two tart pans–one circle and one rectangle. I have no excuse to not make them. And still, I just…don’t.

Except for now. I made one. It turned out pretty good. 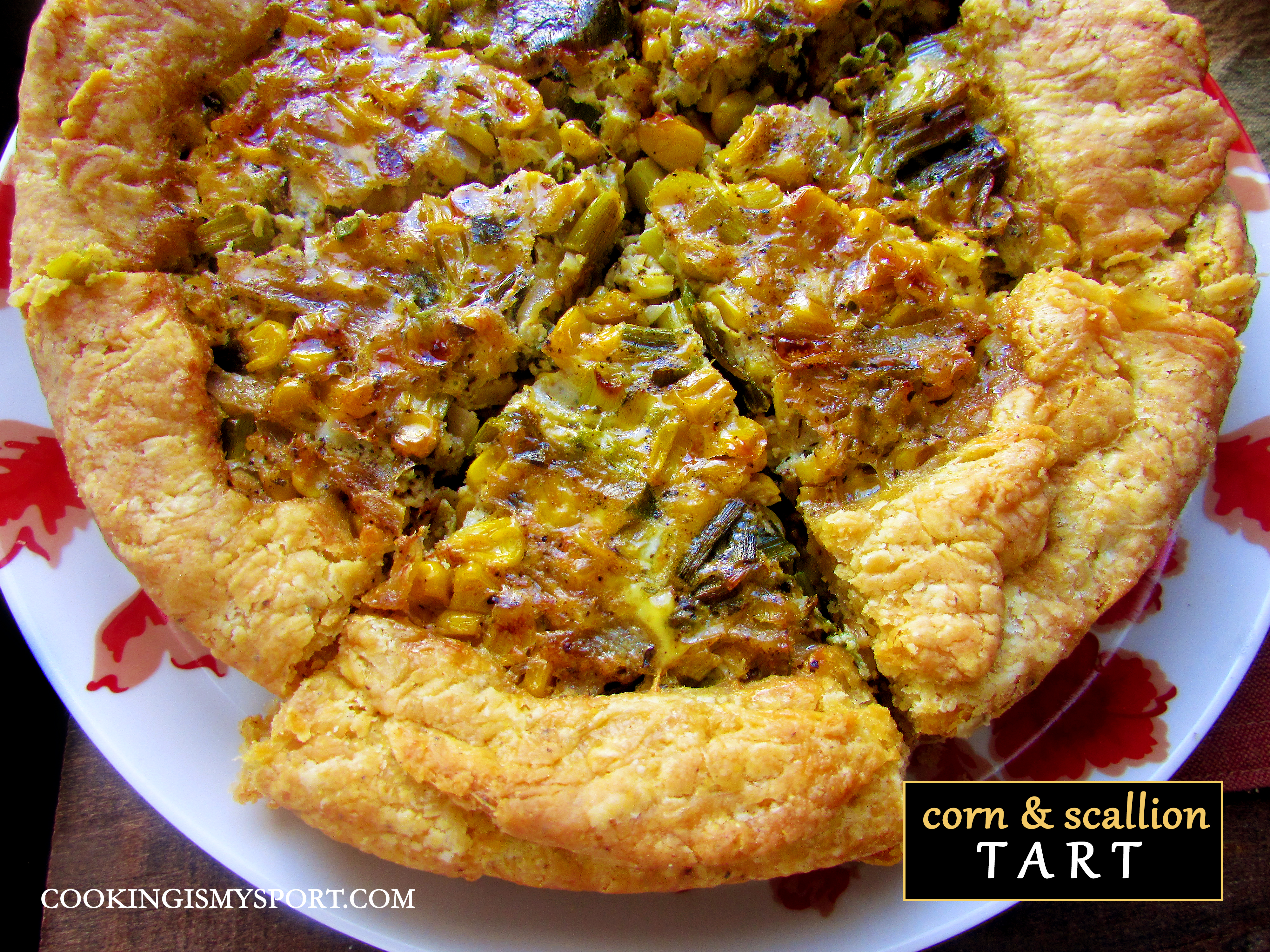 One of the plus sides of the summer winding down (outside of cooler temperatures) is that fresh corn becomes in season in grocery stores and farmer’s markets. And yes. You can taste the different between corn from a cob and corn from a can. If there isn’t any fresh in your area, I’d try to shoot for frozen corn instead. Now to get into the tart itself. 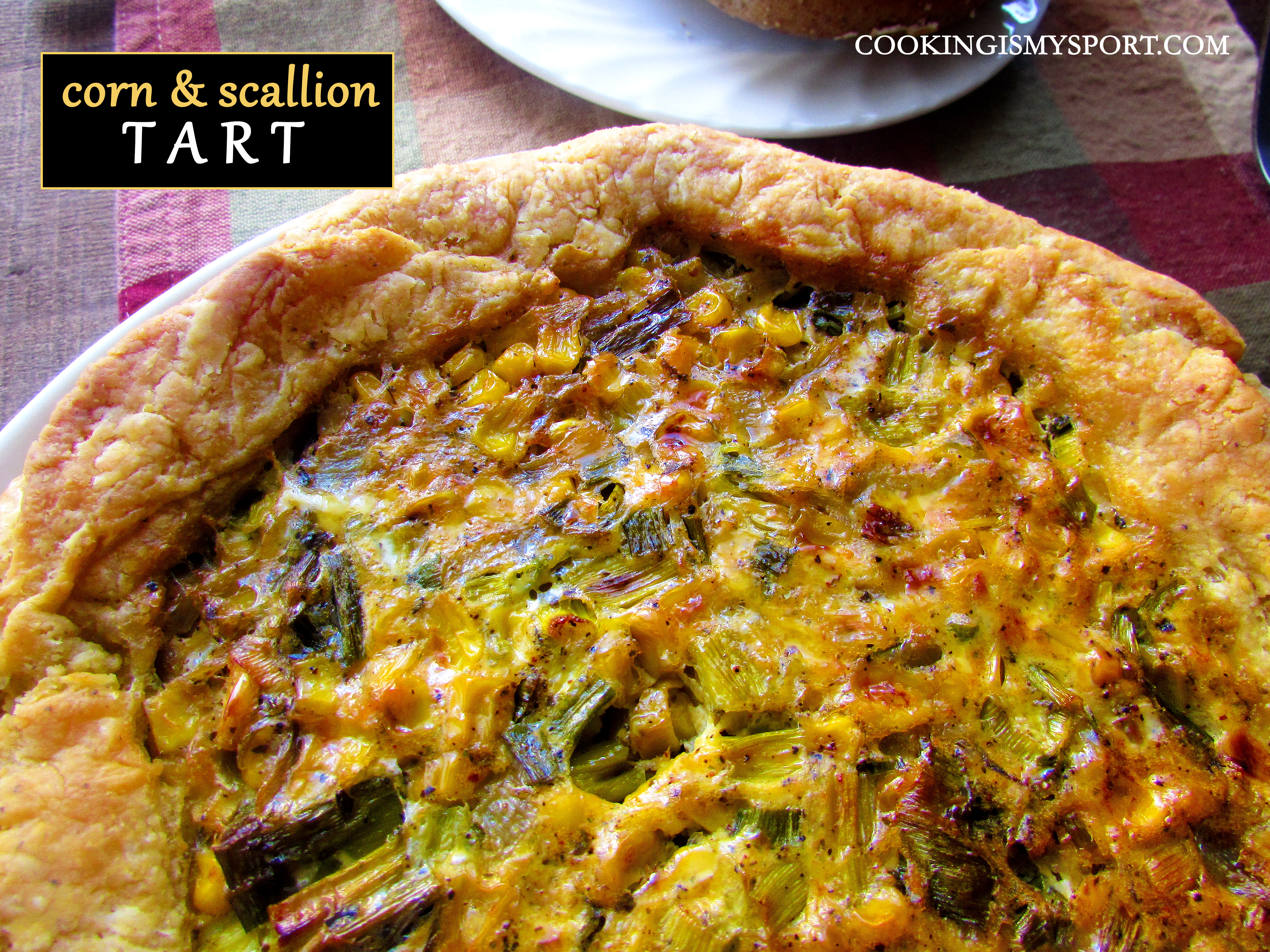 I’ve told you guys several times before that I love to find ways to sneak cornmeal into anything. There’s 1/4 cup of it in the crust, which gives it a grainy, but pleasant contrast of texture. I added a half teaspoon of black pepper as well to give it an extra bite. The filling is very much like a quiche. Corn and scallions make up most of the solids, while eggs and milk make up the custard that bakes up very fluffy and light on the inside. The fresh taste of of the vegetables and the seasoning inside make this a side dish that I was very satisfied with. It’s filling and still somehow manages to taste light. 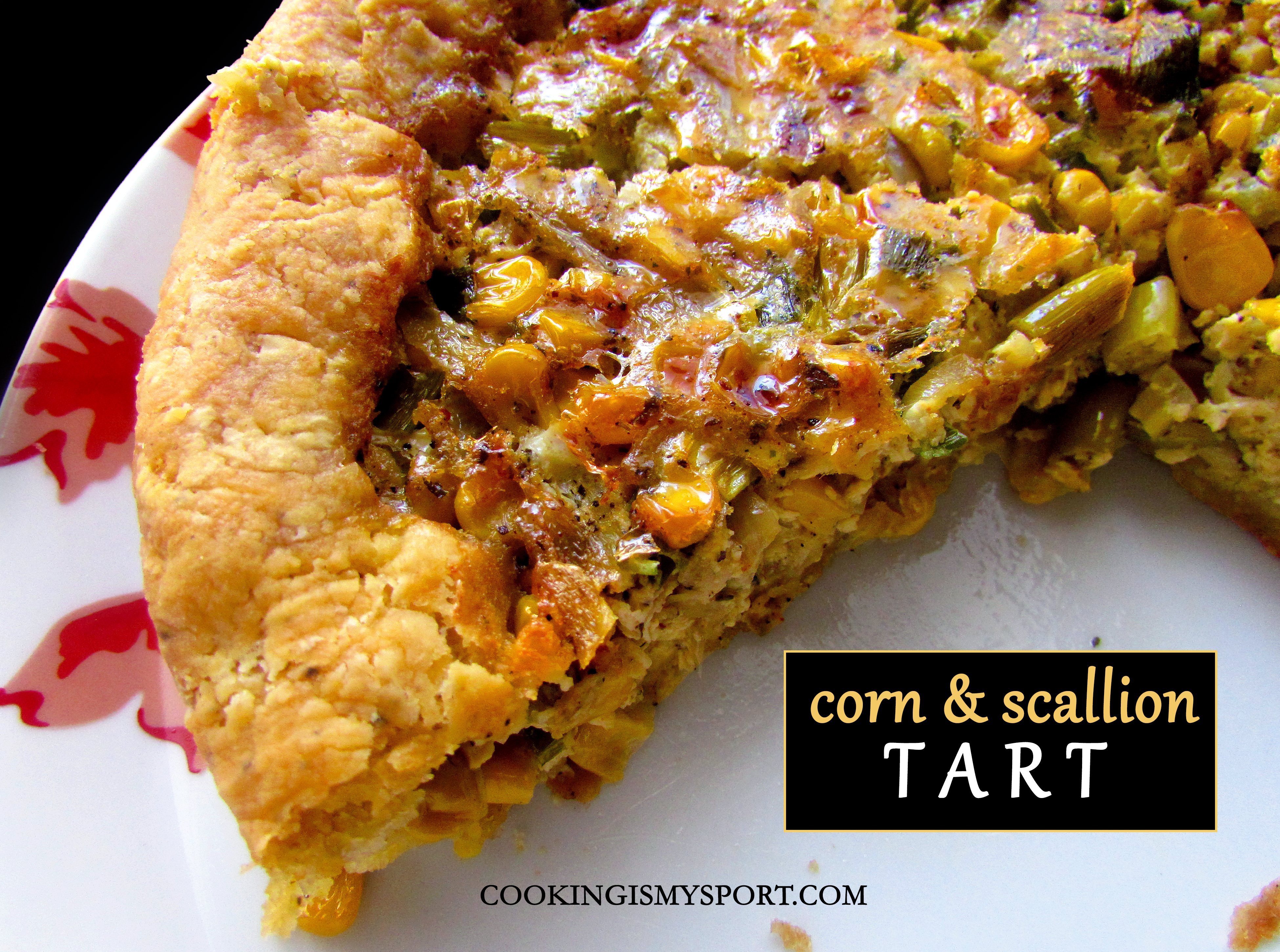 This made an excellent addition to our brinner, but I think it would be a great dish to make for breakfast or lunch as well. On its own I think it’s a side dish but if you wanted to mix in a bit of protein like sausage or bacon to make it a main dish I think it would be great as well.

Linking this up to Fiesta Friday #189. Everyone have a great weekend.

Preheat oven to 375 degrees Fahrenheit. Spray a 9 inch springform pan with cooking spray and set aside.

For Crust: combine all the dry ingredients together in a bowl with a fork. Either use a box grate to grate frozen butter directly into dry ingredients, or cut butter into very small cubes and toss/press into the dry ingredients with a fork until mixture resembles breadcrumbs. Drizzle in enough ice water and stir together until dough just holds together. Shape into a disk, wrap in plastic wrap and refrigerate at least one hour or up to overnight.

Using a rolling pin, flour a surface like a pastry mat cutting board, or wax paper, then roll the dough out to an 11 inch round. Transfer the round to the springform pan and press the dough into the bottom and sides. Place in the fridge while you prepare the filling.

Melt the butter in a skillet, then add the corn and shallot. Saute until the corn has just started to brown and the shallot is translucent, about 7-10 minutes. Add the garlic and cook a minute more before removing from the heat. Stir in the scallions, then set aside. In a small bowl combine the eggs, milk, seasoned salt and pepper and onion powder.

Spread the veggies into the tart shell and use a spatula to press down evenly. Pour the milk mixture over the veggies. Fold the edges of the dough down over the filling, letting some overlap. Place springform pan on a sheet pan, then bake tart in the oven until filling is set and crust is golden brown 60-70 minutes. Transfer to a wire rack to cool for about 10-15 minutes before unmolding and serving.

13 thoughts on “Corn and Scallion Tart”