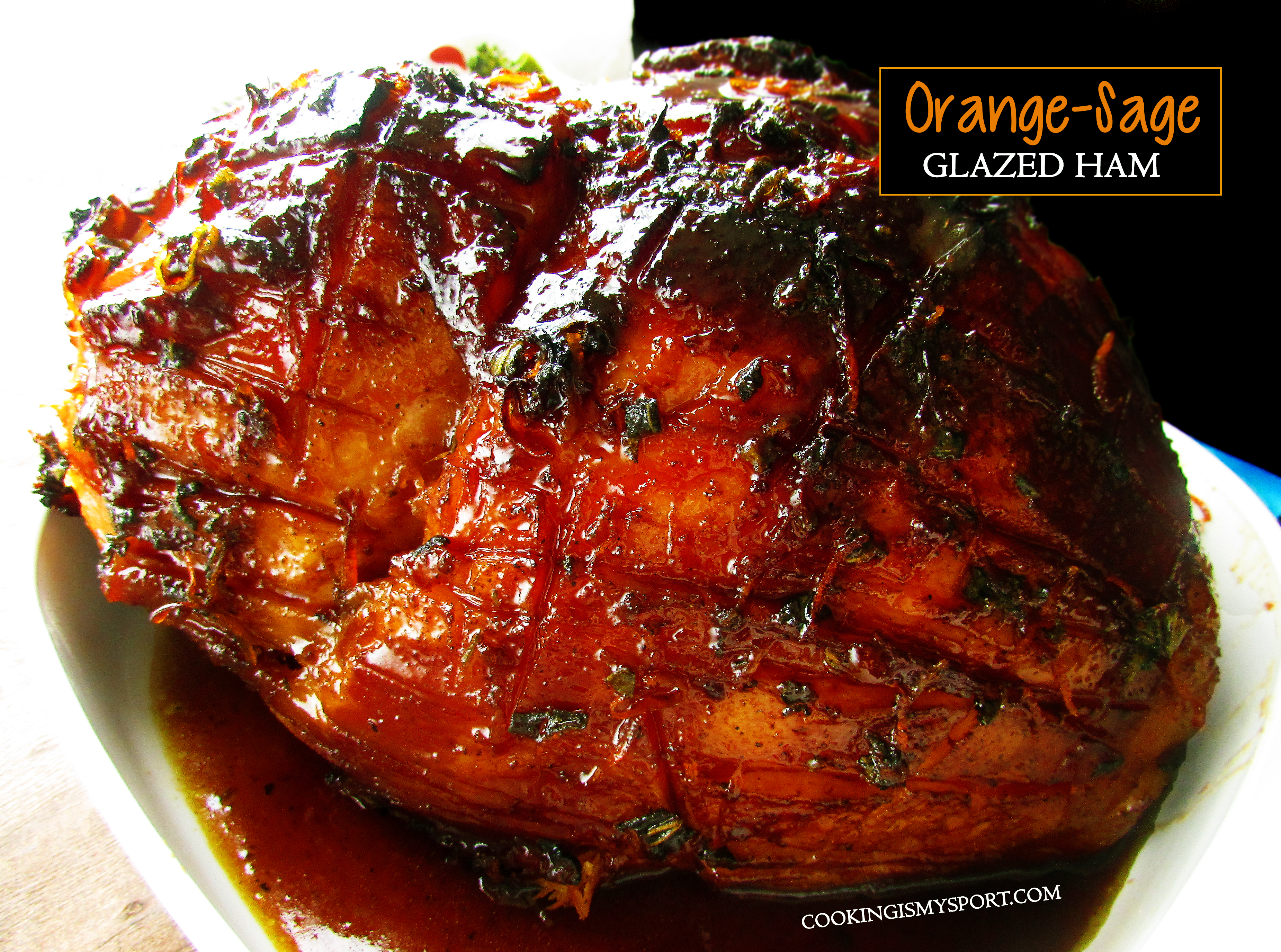 We don’t eat ham very often, but every time we do I wonder why and how I always seem to forget how much I love it. I don’t understand why ham catches the flack that it does–people either seem to love it or hate and the majority of people I know are inclined to the latter. Crazies.

Debate among yourselves about the whys–we like and eat ham ’round here and in case some of y’all will be too, I thought that Easter weekend would be a good time to share the most recent way that I made it. 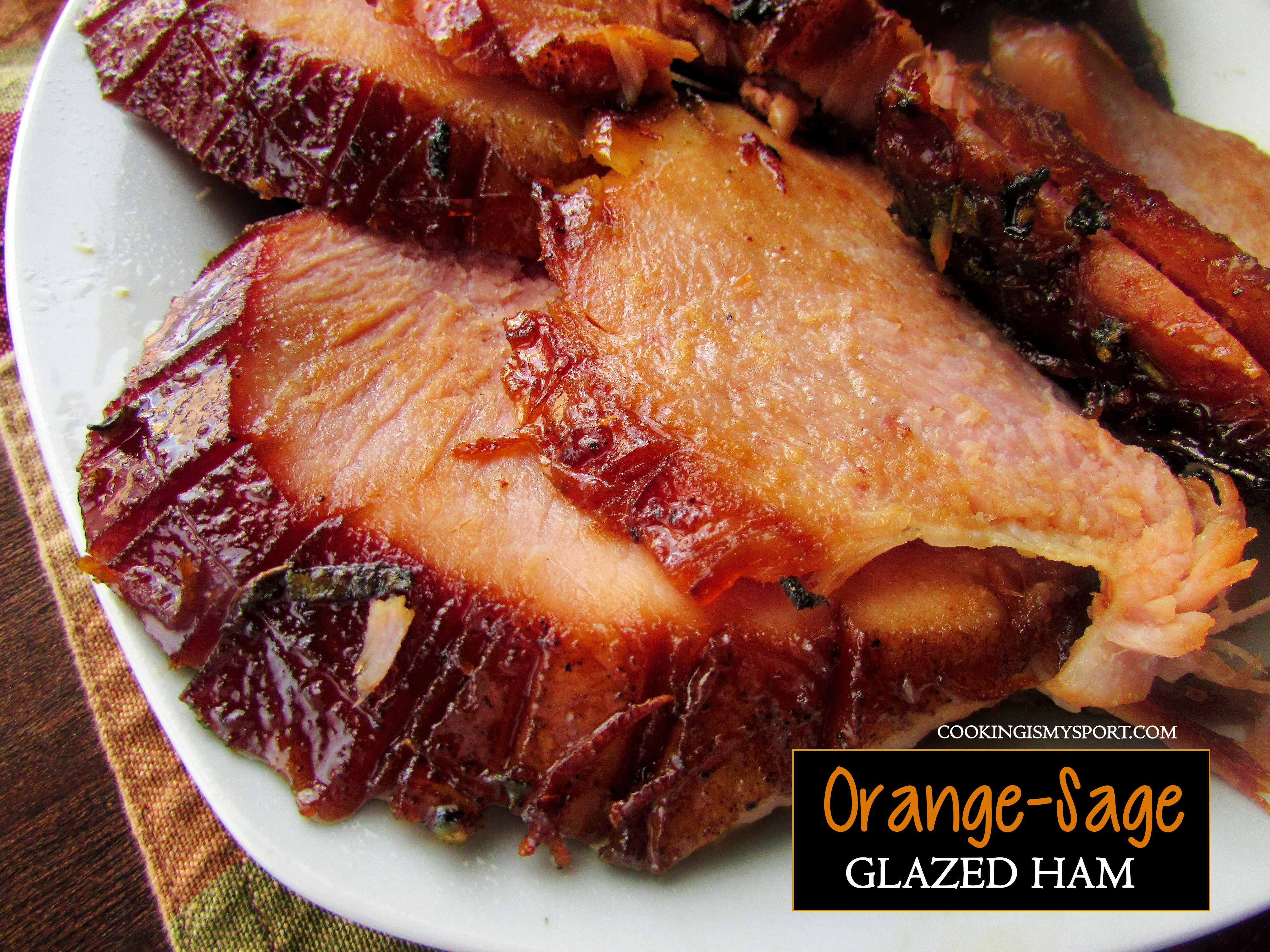 I really don’t think that much needs to be done to a ham if it’s pre-smoked. So long as you have a good spice rub and glaze, the oven should be doing most of the work. That’s certainly the case here. It may take some time to cook, but this recipe couldn’t be easier to put together.

Citrus works really well with pork, especially orange.  You’ll be using both the zest and the juice; nothing wasted. For the rub, fresh sage gets mashed together with oil and the zest to form a thick paste that you’re going to schmear all over the ham. Let it do its thing in the oven while you put together the orange glaze that’s spiced with cloves and cinnamon. By the time it finishes cooking it’ll be thick, syrupy and spicy-sweet, which is exactly where you want it to be. 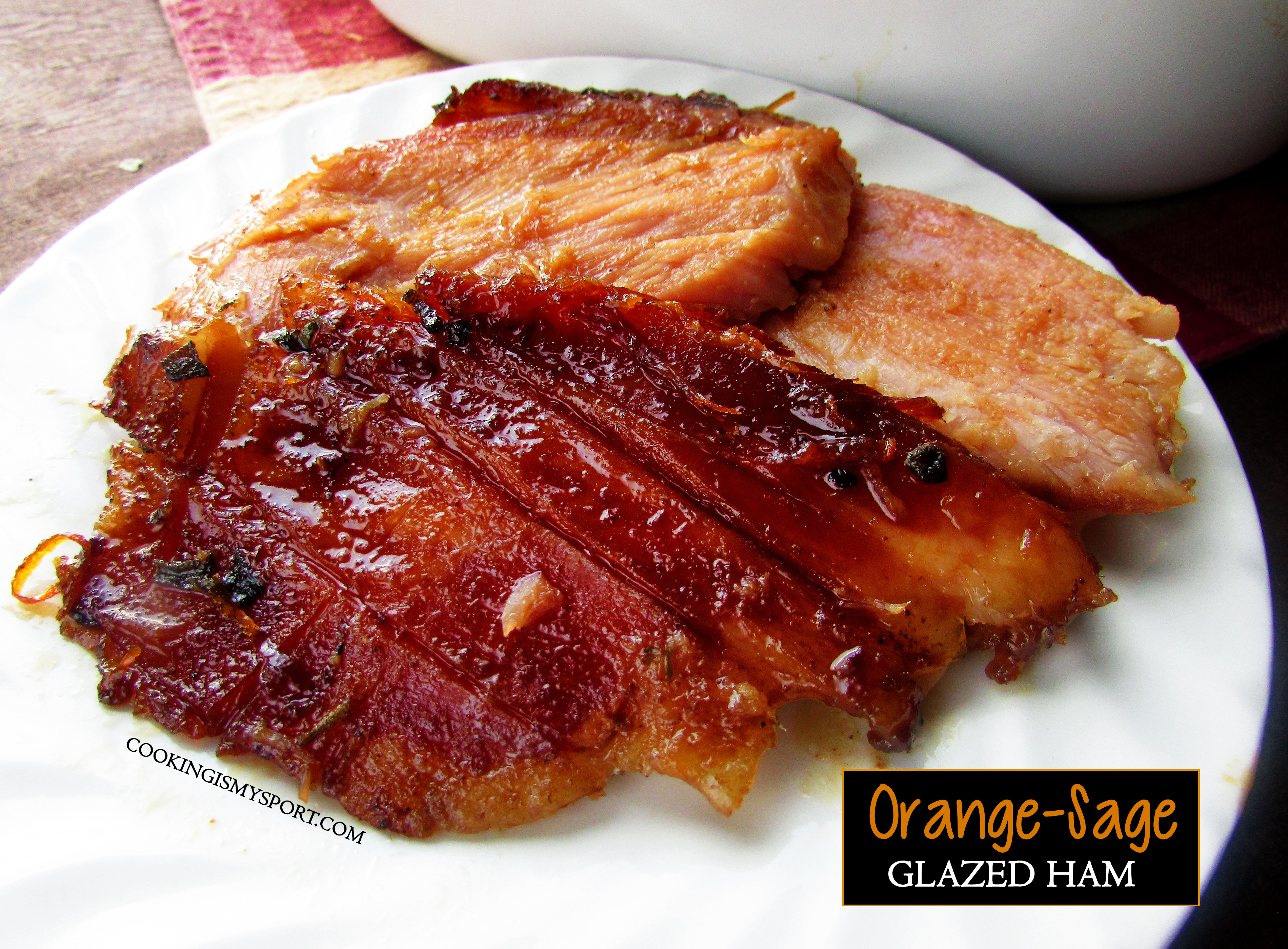 I know it takes a little bit, but your patience in letting the ham bake low and slow will allow the oven to render out the fat across the top. Once it’s cooked through and the glaze gets poured over it, the sugars in the glaze caramelize to form a thick, dark crust; it’s such a beautiful thing. The smells alone are gonna get you. The sweet tartness of the glaze balances out the saltiness of the ham. The spice of the cloves is also a nice flavor to balance out them both.

Also, let’s be honest: half of the reason I love making ham so much is that the leftovers make the BEST sandwiches or protein for salads. Or, if you really wanted to get creative you could use some of your leftovers on this bread pudding I made a few weeks ago.

Happy Easter to all who celebrate, and a Happy Fiesta Friday#217, co-hosted this week by Abbey @ Three Cats and a Girl and Angie@ Fiesta Friday.

Place ham in a large roasting pan, fat side up. Using a sharp knife, score the ham with cuts across the skin, about 2-inches apart and 1/2-inch deep. Cut diagonally down the slashes to form a diamond pattern; season the meat generously with the seasoned salt and pepper.

Roughly chop the sage leaves and place in a small bowl with the orange zest. Drizzle in the oil to form a thick paste. Rub the paste all over the ham, making sure you get down into some of the slits. Bake uncovered for about 90 minutes.

Meanwhile, place a saucepan over medium heat. Pour in the orange juice, the butter, brown sugar, water, cloves and cinnamon sticks. Slowly cook down until it form a syrupy glaze—this will take 45-50 minutes.

At the end of the 90 minutes, pour all of the glaze over the ham, cinnamon sticks and all. Continue to bake and baste with the pan juices every 15 minutes for an additional 35-45 minutes. Crank the heat up to 400 to allow a dark sugary crust to form across the top of the ham, about 10 minutes.

Remove from the oven and allow the ham to rest before carving for about 15 minutes.