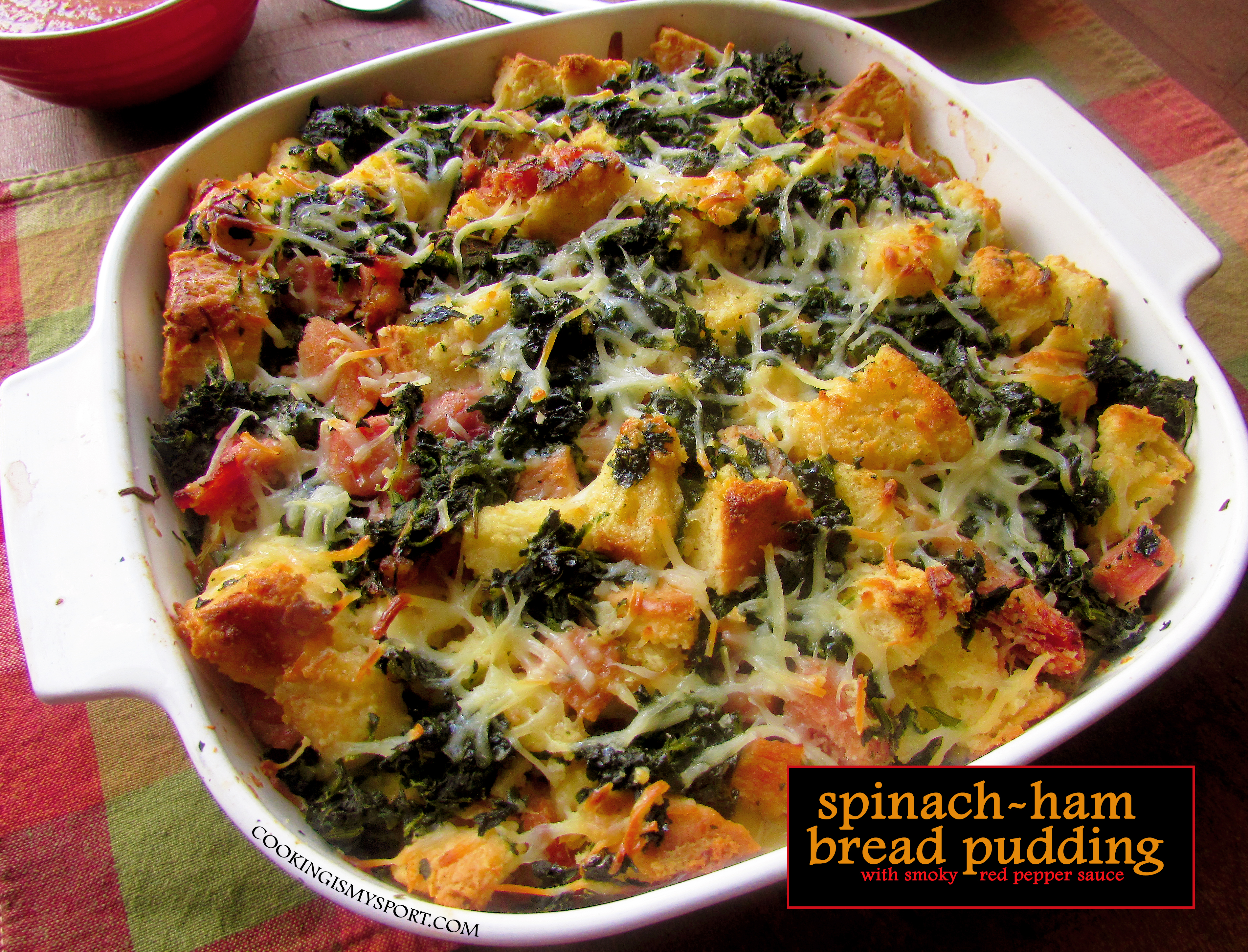 Sorry about missing last week. I don’t have a good excuse–I was just in an off mood and for some reason couldn’t get enough focus. I kept pushing back and procrastinating in writing the post until I finally just decided that it wasn’t going to happen. I have been doing quite a bit of both cooking and baking to try and perk myself up though, so you’ll get to see the product of that in the coming weeks. 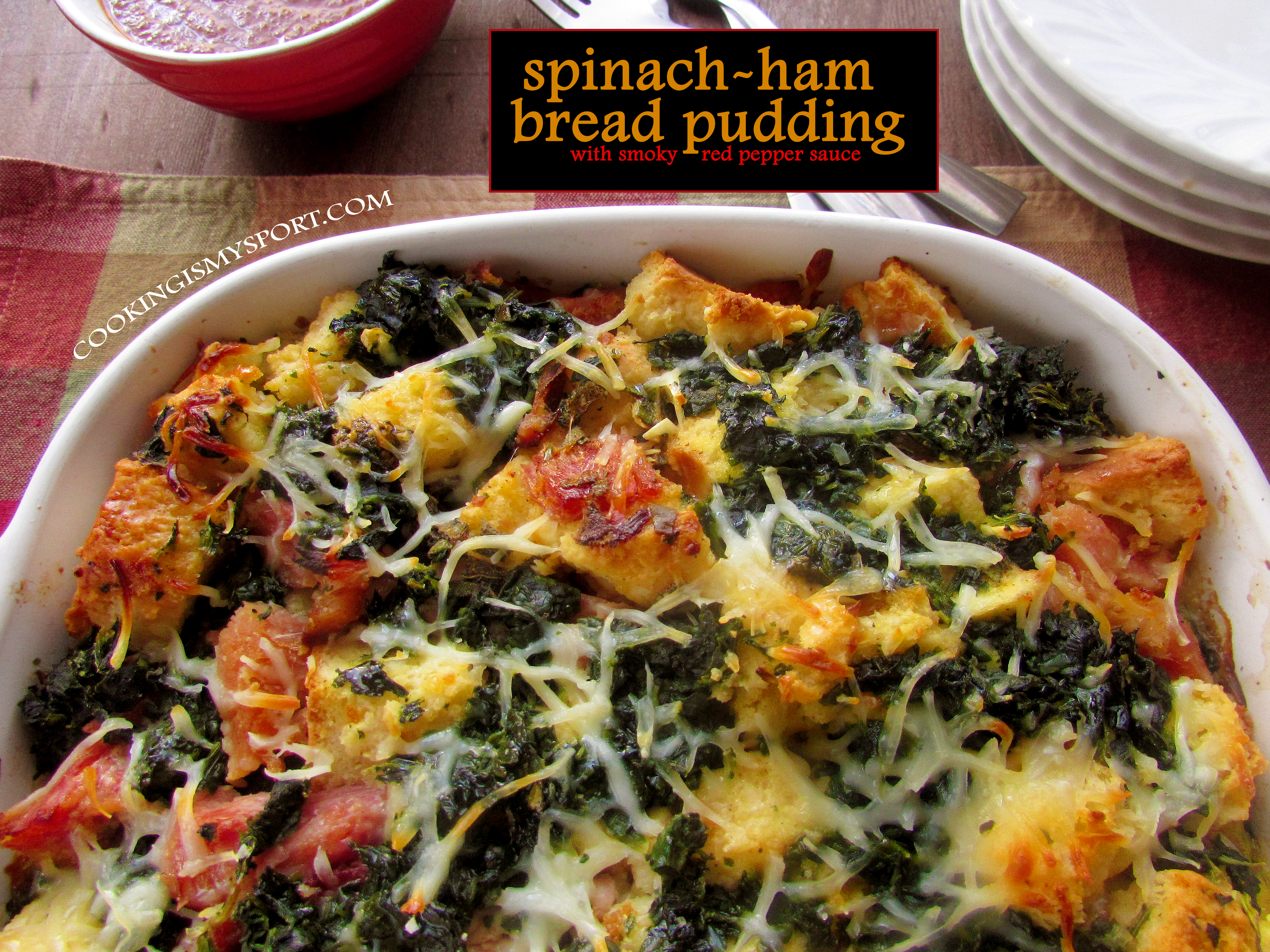 When I cook and bake, I usually have a habit of making quite a bit of food at one time. This is mostly so that I don’t have to do very much heavy cooking throughout the week. I know it’s not for everyone, but we’re staunch believers in meal prep and leftovers round here. As such, I try and re-purpose the leftovers into new dishes, just to mix things up and not get bored.

Last week’s post were these English scones that I flavored with orange. Because I doubled the recipe we actually had quite a few left over and although it would’ve been fine to just eat them on their own, I got an idea for another way to use them. 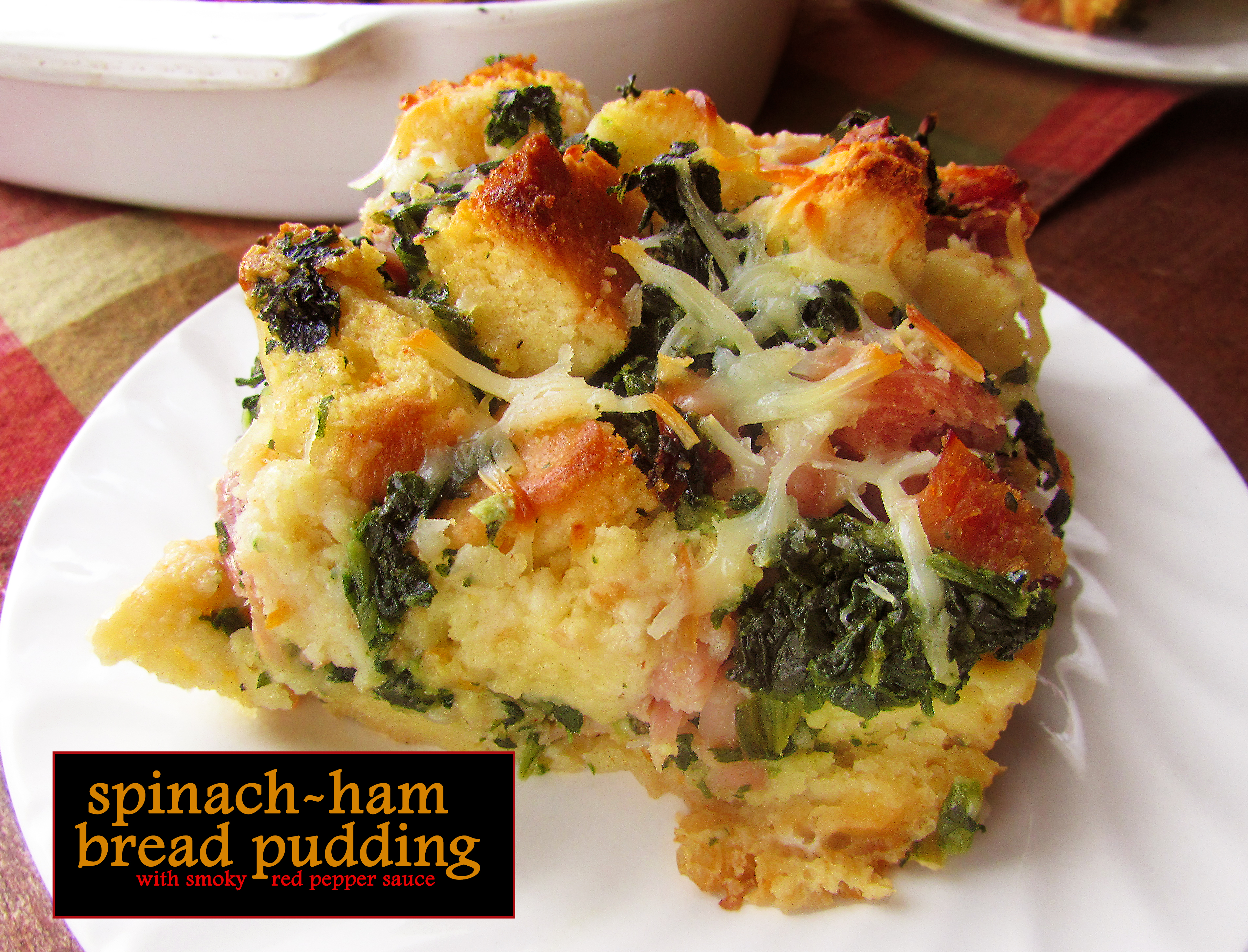 We usually have breakfast for dinner once a week and I wanted to do something a bit different than biscuits or pancakes (either one is what I’ll usually make). When I saw that I also had some leftover ham in the fridge, I knew that there was one of two ways we could go with it: scone breakfast sandwiches, or I could go ahead and try to make a bread pudding-strata…thingy to share on the blog.

As you can see, the bread pudding-strata thingy won out. 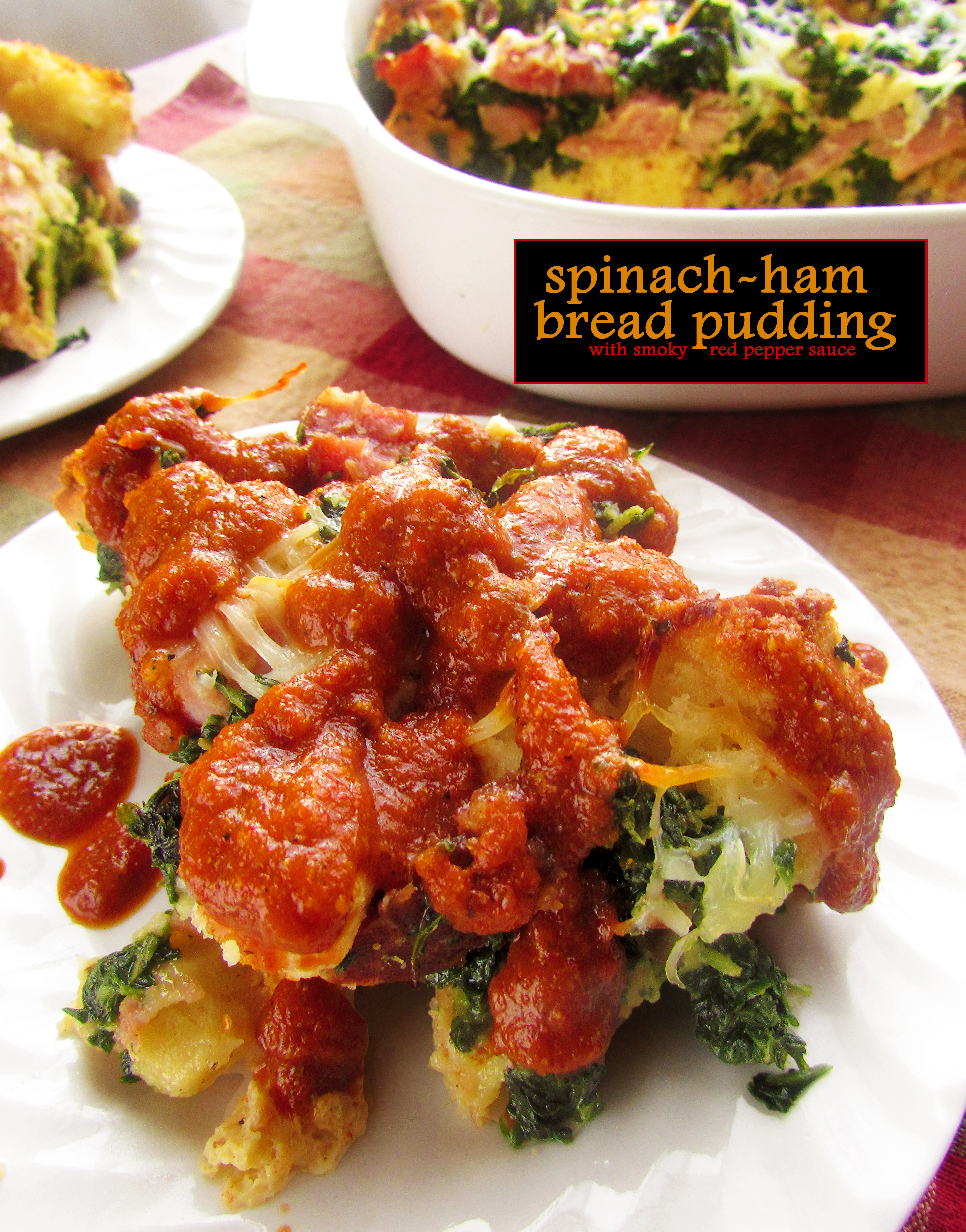 First of all, I know that most strata and bread pudding recipes call for a French bread or a sturdy type of bread like challah or brioche to be used as the base. If you are in a hurry then you can of course go ahead and buy some in a store for this–it’ll still turn out great. However. If you’ve got the time, I really do recommend making and using the scones as the bread base. I know it may seem like an odd choice, as the scones are on the sweet side and this is a savory dish.

But they work. They really do. The orange flavor gives the dish a special taste that we agreed it wouldn’t have if I had just used regular bread. The next time I make this, you can bet I’ll be putting in the extra effort to and baking the scones to use as the base. 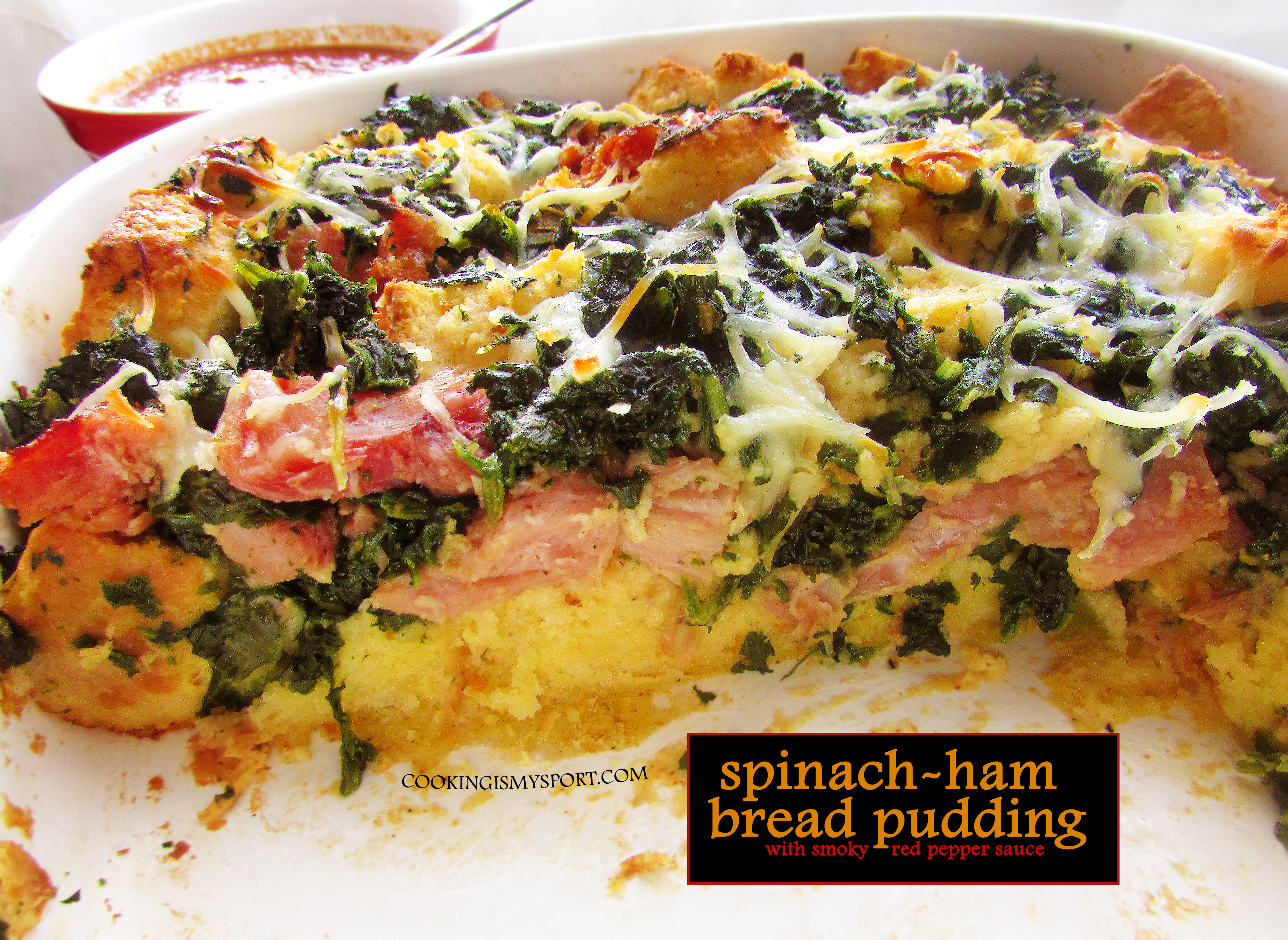 If ham is not your favorite protein, then you can definitely substitute it for another protein–sausage, turkey sausage, chicken-sausage. You could leave the meat out entirely if you’d like to make it vegetarian and just use mushrooms. Don’t sweat it too much. This bread pudding-strata thingy is very forgiving in terms of swapping out ingredients.

I know I could’ve left it plain and still had a tasty dish, but I’m a huge condiment lover. Plus, as most bread puddings DO have sauces on the side I decided I would make a sauce for this one. 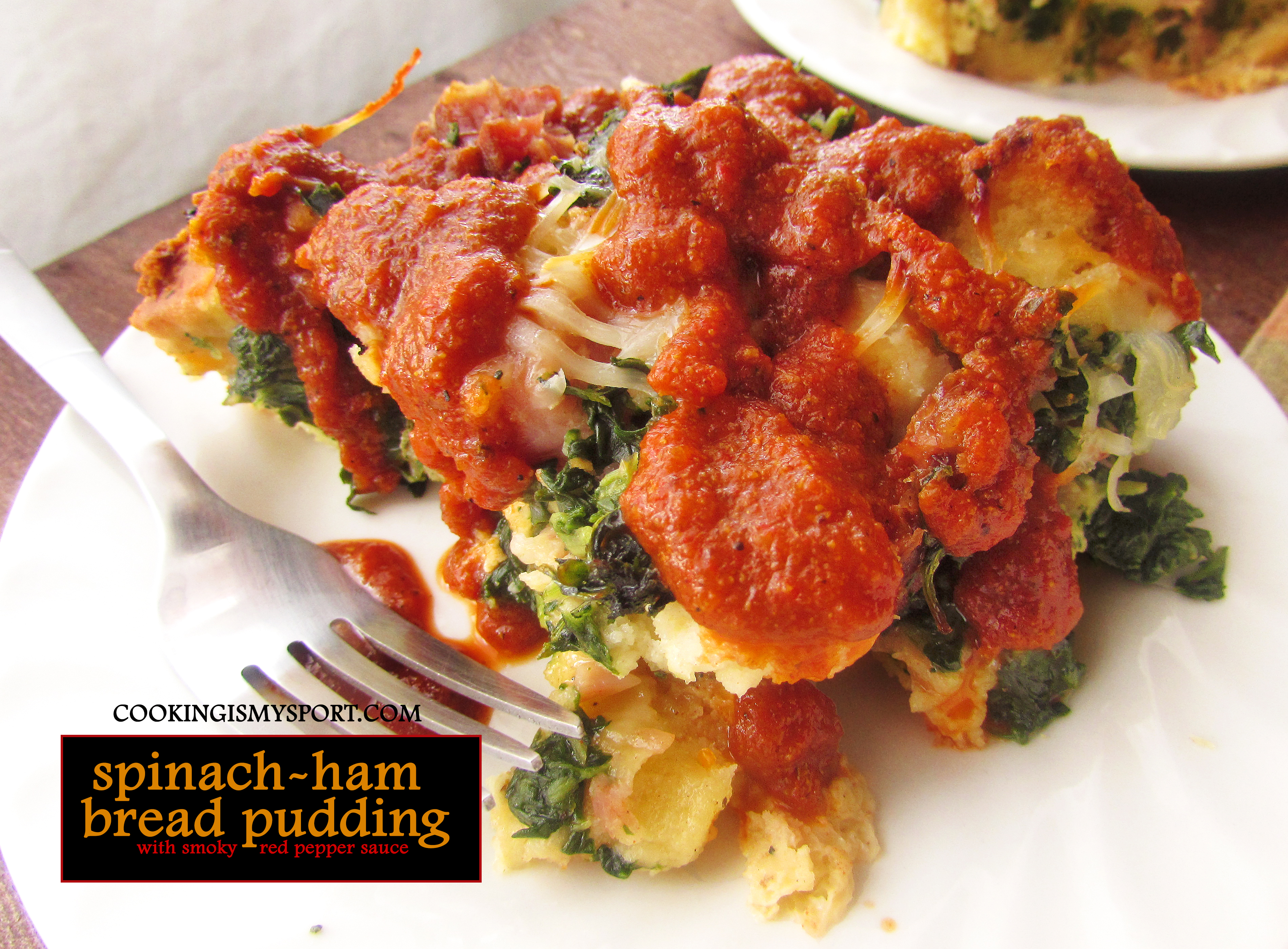 This is what I like to call a little ‘recipe recycling’. You guys remember the spiced meatballs I made earlier last August? Well I decided on a whim to try and see if the sauce that I made to go along with the meatballs would also pair nicely with the bread pudding-strata thingy. The sauce looks like it’s a tomato base, but it’s actually roasted red peppers, roasted onions and roasted garlic that I pureed together in the blender, then simmered over the stove with smoked paprika and a few other spices. I really love it all on its own and I thought that it would be worth a try to see what else I could ‘recycle’ it with. 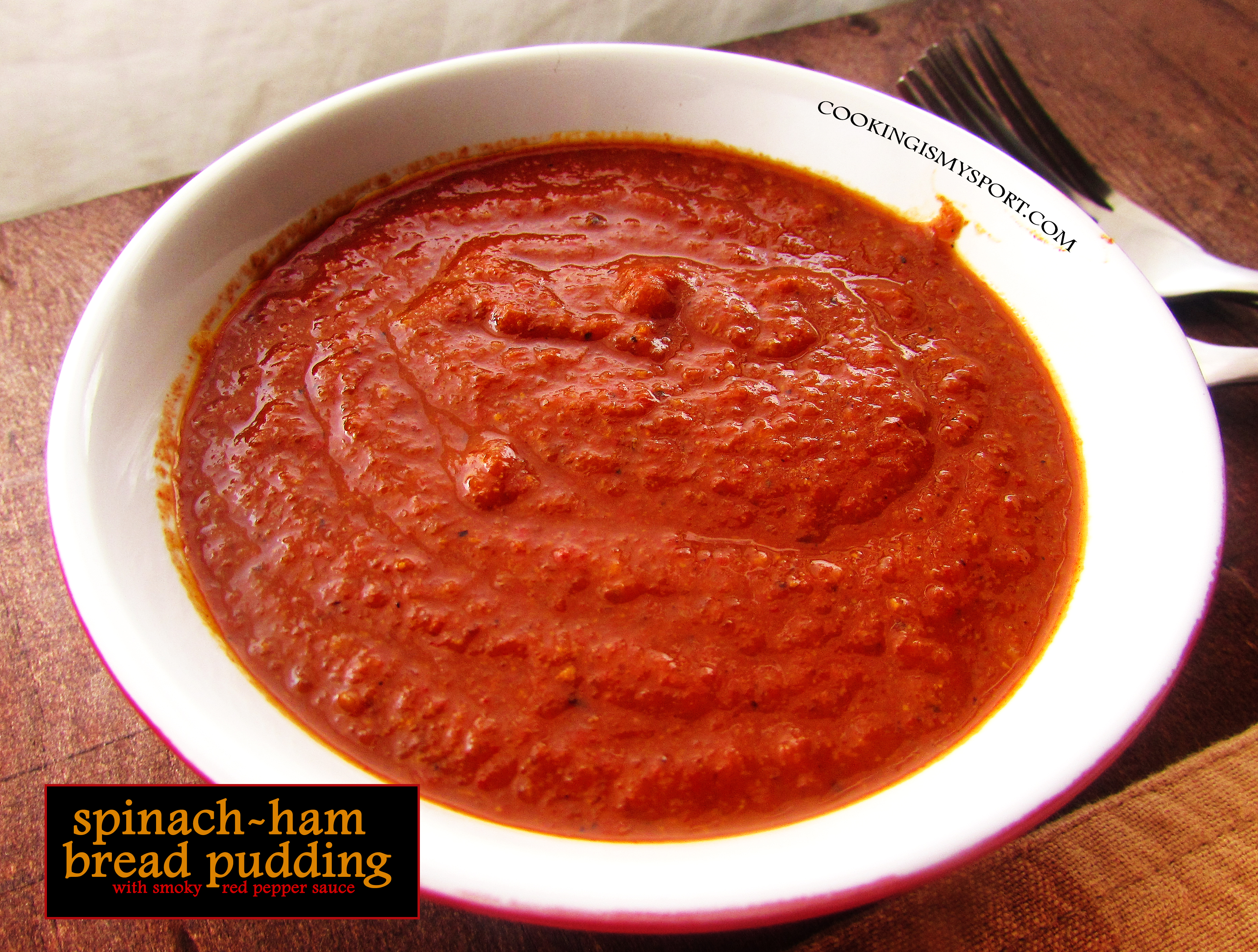 I was once again, pleasantly surprised. The sauce was a perfect smoky compliment to the bread pudding/strata, that in and of itself has a very nice balance of sweetness from the scones, and saltiness from the ham and cheese. Even with the meat and carbs, it filled me up without making me feel too full. I’m not really sure what the proper term for this thing would be considering that I think it somehow manages to check all the boxes of bread pudding, strata, casserole, and breakfast bake at the same time. I’m not sure the name of it really matters considering that we really liked this, and I think you would too. So why not give it a try?

Linking this up to Fiesta Friday #214, co-hosted this week by Abbey @ Three Cats and a Girl and Antonia @ Zoale.com.

In a separate bowl combine the eggs, the remaining 3/4 cup of milk, garlic, sage, thyme and seasoned salt and pepper. Beat together with a fork.

Cover the dish tightly with plastic wrap and refrigerate overnight. Preheat oven to 350°F. Uncover the dish then bake on the middle rack until the top is golden brown and the pudding is firm in the middle, 55-60 minutes. Serve warm with the sauce.

For the Sauce: Rub about 1 teaspoon of vegetable or canola oil on top of garlic head. Sprinkle the top with salt & pepper and place in the middle of a piece of aluminum foil. Wrap the foil around the garlic, like a package. Place on a half sheet pan and bake in the oven for about 50-55 minutes. Remove and allow to cool until warm enough to handle.

Meanwhile, crank oven up to 450°. Line two sheet pans with aluminum foil and lightly spray with cooking spray.  Drizzle the peppers with oil, salt & pepper, then arrange with the cut sides down on the pans. Roast in the oven until the skins have started to char & separate from the inner flesh and the peppers have started to collapse, about 25-30 minutes (you may need to rotate pans halfway to ensure even roasting).

Remove the peppers and onions to a bowl and cover with foil to allow to cool down, about 30 minutes. Once cool, use your fingers to rub away the outer skins of the red peppers (they should come away easily). Discard skins and place roasted veggies into a blender or food processor. Take the roasted garlic head and break off individual cloves. Use your fingers to press/squeeze out the pulp into the container of the blender/processor with the veggies. (It should come out very easily). Place the lid on, and puree the mixture together on high speed until very smooth.

Pour the mixture into a large Dutch oven or stockpot. Pour in the beef broth and add the spices, Soy and Worcestershire sauces, sugar and salt & pepper to taste. Bring to a boil, then lower to a simmer and allow sauce to cook for about 20 minutes.