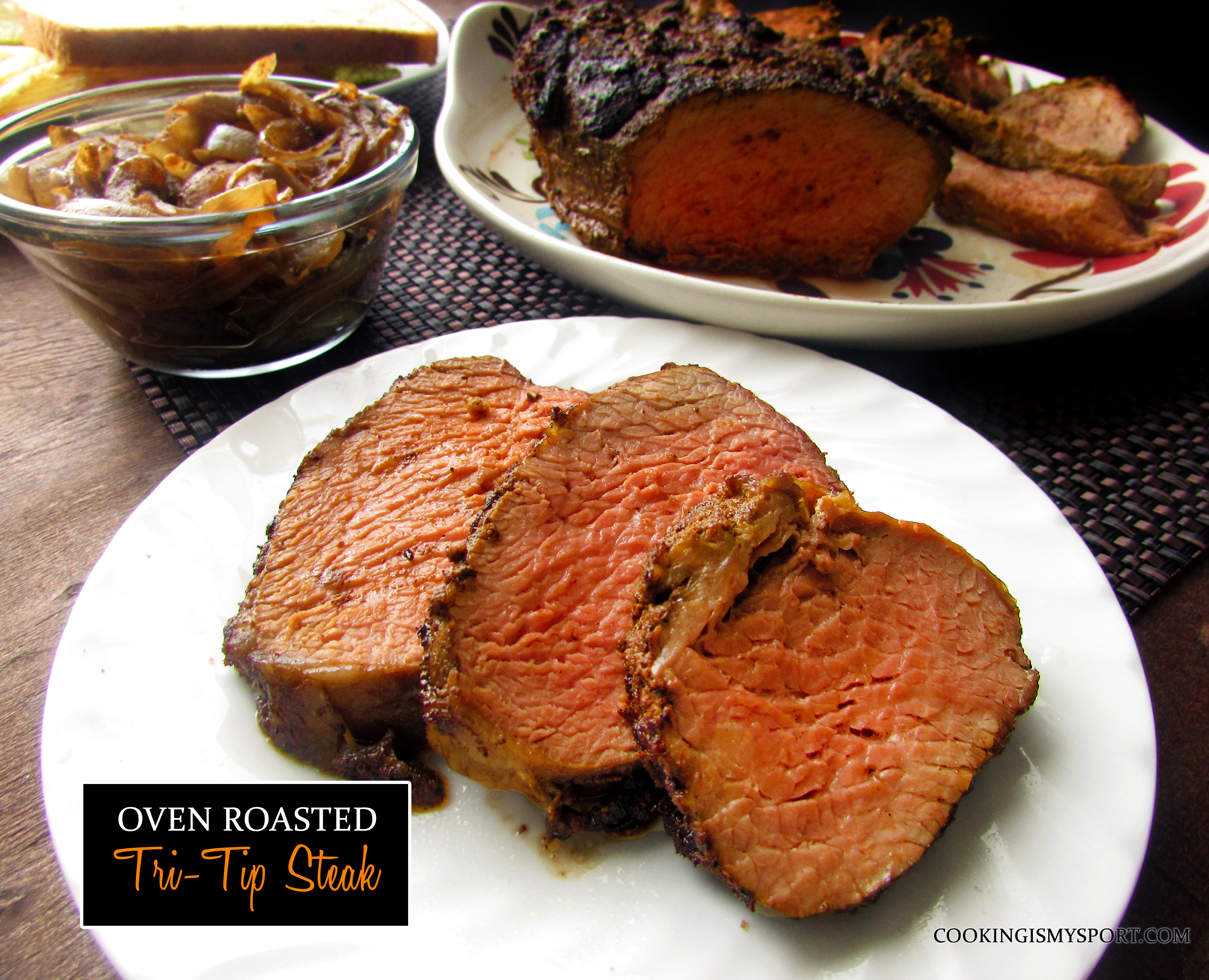 Back when I was still in the Mitten, I didn’t eat too much red meat.

In that area, ground beef was pretty cheap before and when I first started cooking but almost directly after that, it suddenly became…not so cheap. And other cuts like chuck, eye of round, steak and whatnot were hardly ever within the price range of what was do-able for a girl who regularly peruses the sale ads and basically gets what most inexpensive. So, I didn’t eat it too much because I didn’t get to buy & cook it myself too much. 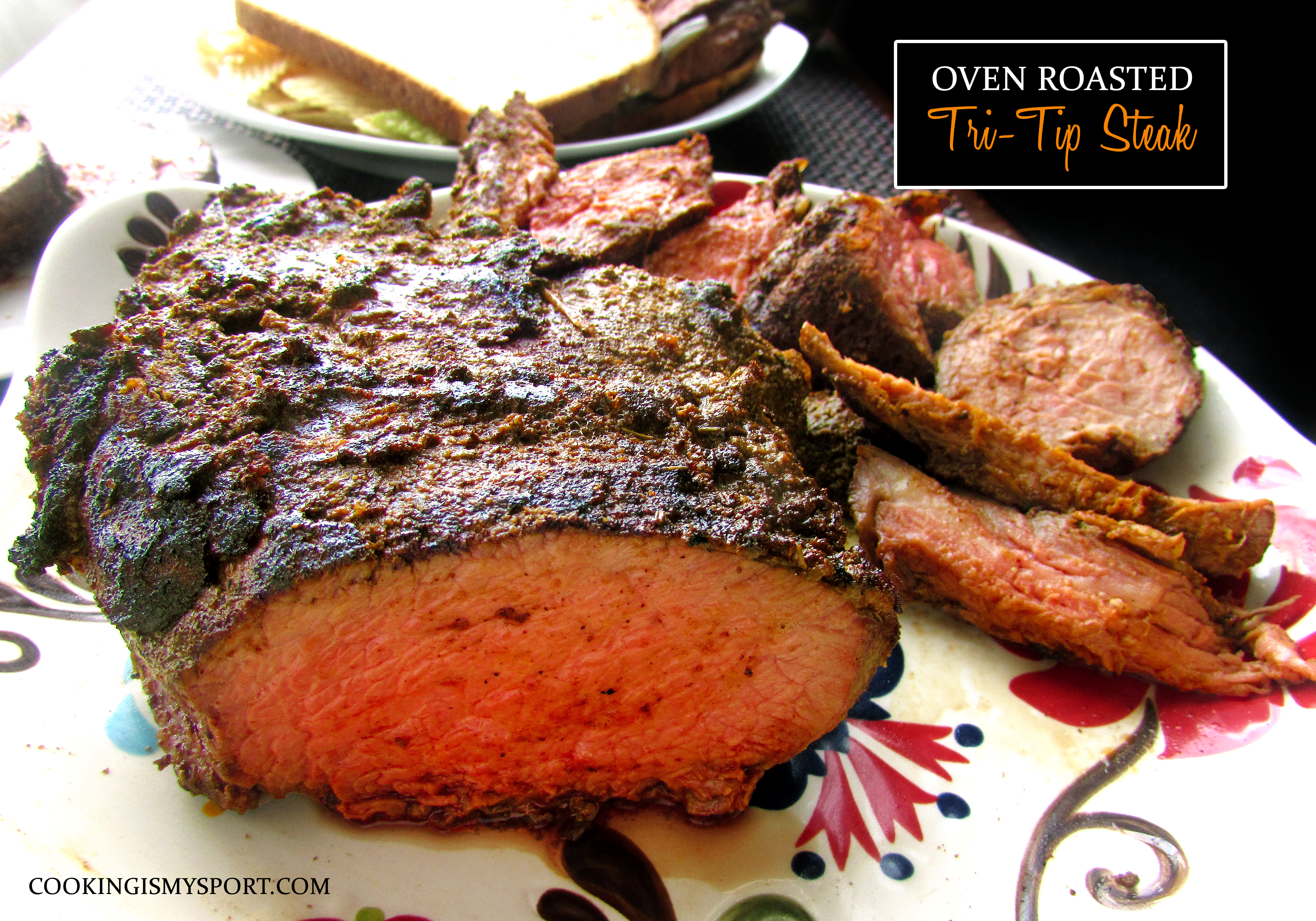 It didn’t bother me ‘too’ much. If you guys have been following me for a while, you’ll know that my favorite protein, by far, is chicken. It’s not only delicious and better for you, it’s also usually more inexpensive than red meat. The last of which, really matters to yours truly.

However, I do like red meat. And in spite of not having quite as much of a chance to cook with it than with white meat, I do think I walk away with pretty tasty results. When I get the odd craving for it, I REALLY get a craving. It’s a stronger one than the one I get for chicken, to be honest. It can be satiated by one of three things: 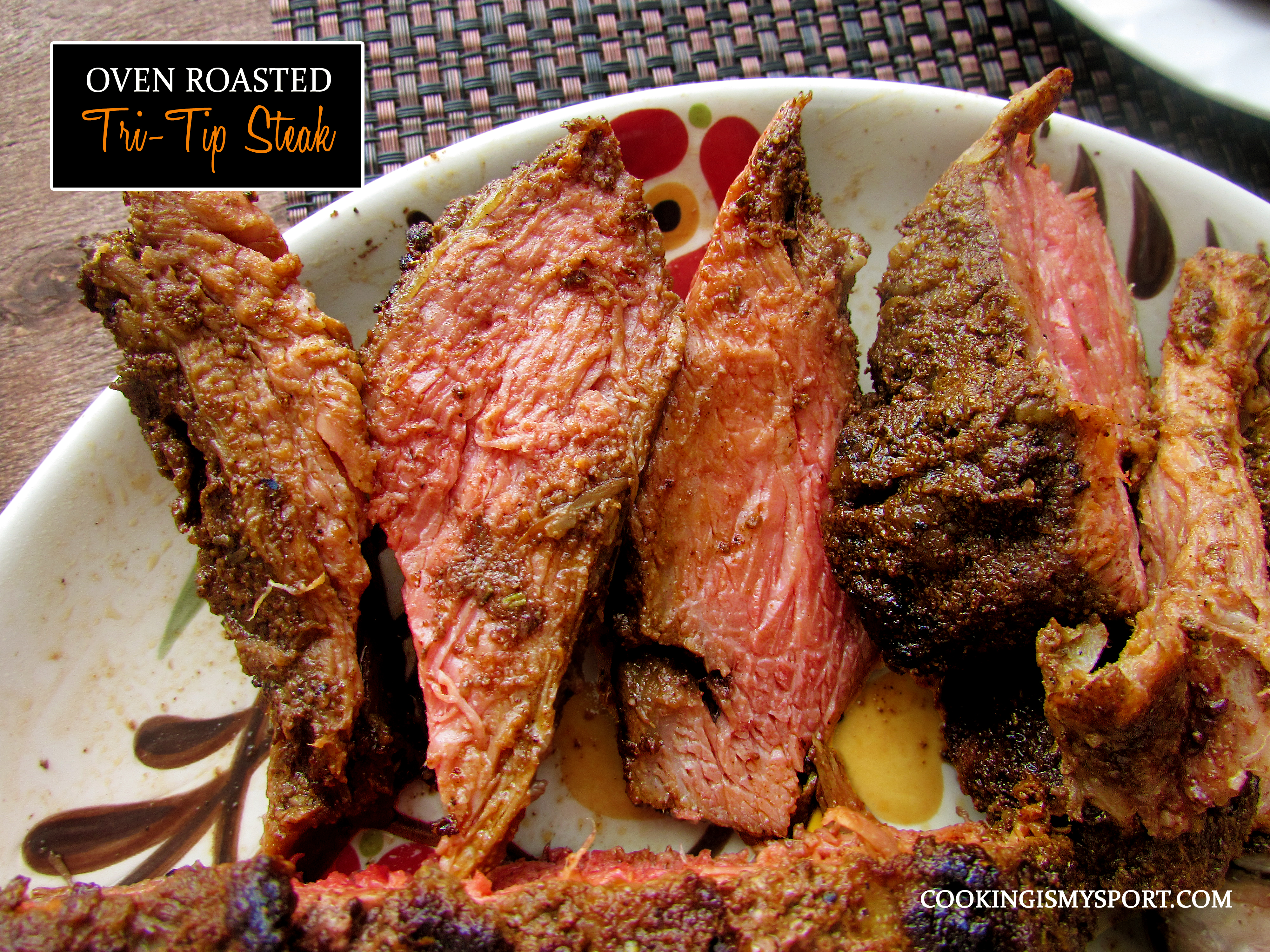 While I was living in the Mitten, (since red meat wasn’t the most inexpensive choice in the grocery store when cooking for a family) I would usually just treat myself to one of the dishes at a take-out place or sit-down restaurant every once in a while and my craving would be satisfied and that was the end of it.

As it turns out, things are somewhat different on the west side. There are of course going to be certain things that are going to be pricey anywhere, at any time of year, guaranteed. However, since coming here I’ve discovered that for some reason, certain cuts of red meat are just cheaper than they are in the Midwest. I mean, REALLY good deals when and if you know how to find them. As a result, I’ve been able to flex my beef-recipe muscles out and giving them more experience than they’ve ever had before in the Mitten. 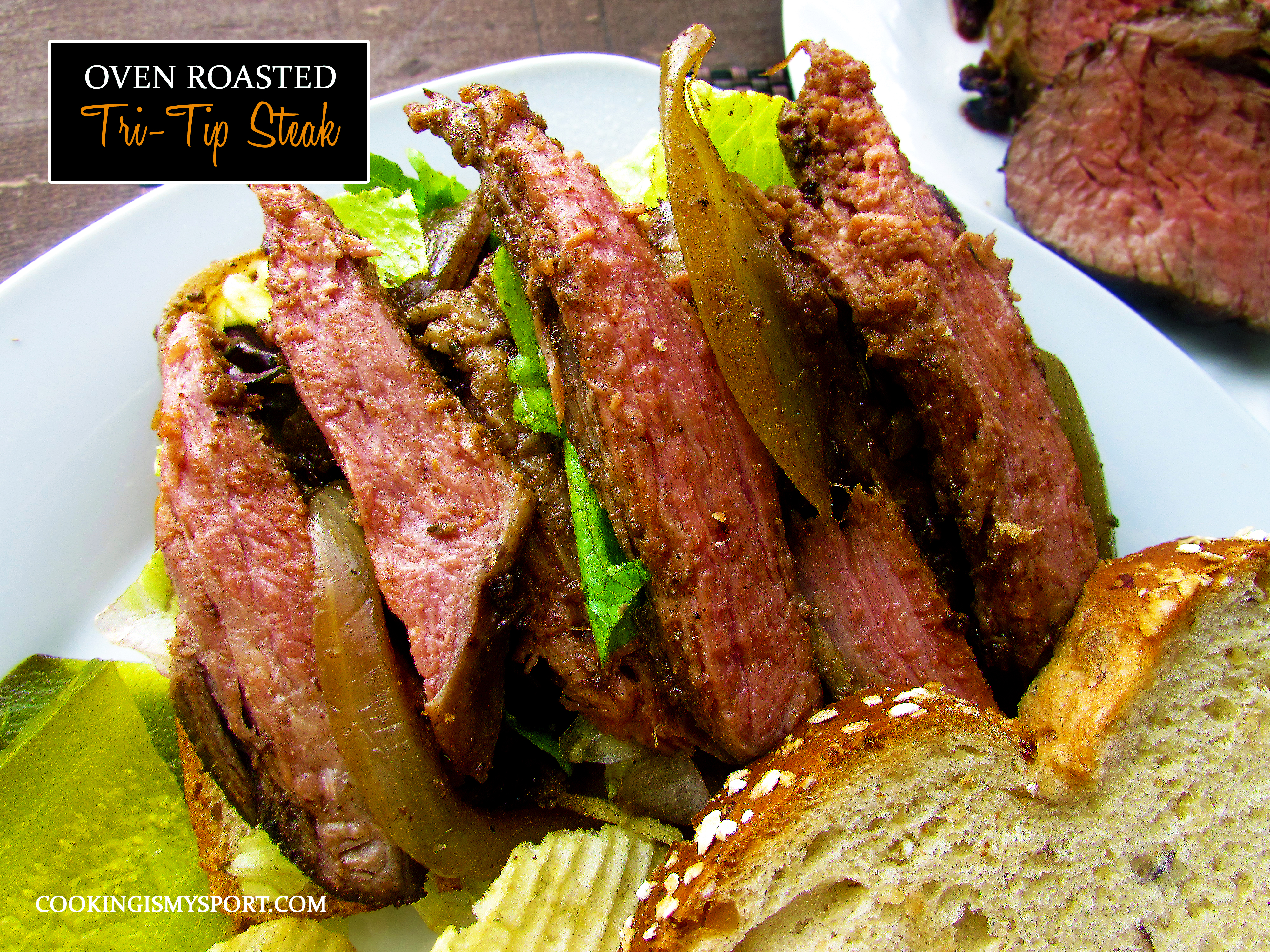 One of the meats that we’ve been able to get at a really good deal is Tri-Tip beef. The tri-tip is a cut of muscle; in diagram terms of the cow, it’s in front of the Round portion, beneath the tenderloin and above the flank. It’s kinda shaped like a boomerang, and is a really beautiful piece of meat. It’s got the lean cut of tenderloin, with just enough marbling of fat to give it the moisture and tenderness that’s on the fattier cuts, like round. I’d never heard of it at all since coming out here, but let me tell you: since we’ve been here I’ve prepared it three times.

Two out of three of those times was using this recipe. 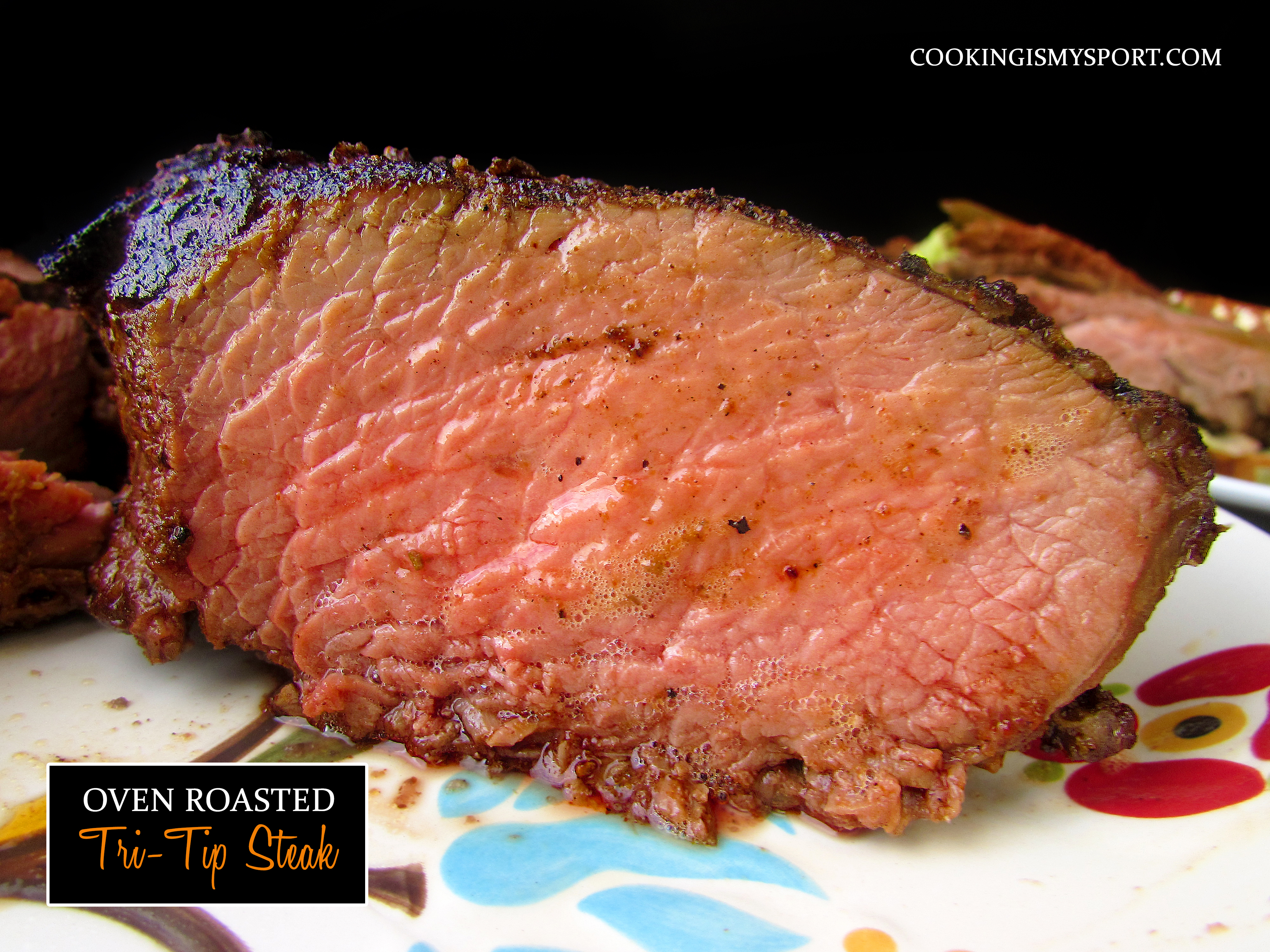 Whenever I’m not largely familiar with a dish or an ingredient, I do prefer to keep things simple so as to not mess it up. That’s what I did here and even though it’s a simple enough recipe, the flavors more than make up for it. I looked up the standard way to cook a tri-tip in the oven (since me and the grill don’t get along), then I assembled together some of my favorite spices, blended the two together and came out on the other end with what you guys are seeing here.

There is one tool that I HIGHLY recommend you use when cooking this (and frankly, I think it’s something every home cook should have in their kitchen anyway): an instant read thermometer. Why? 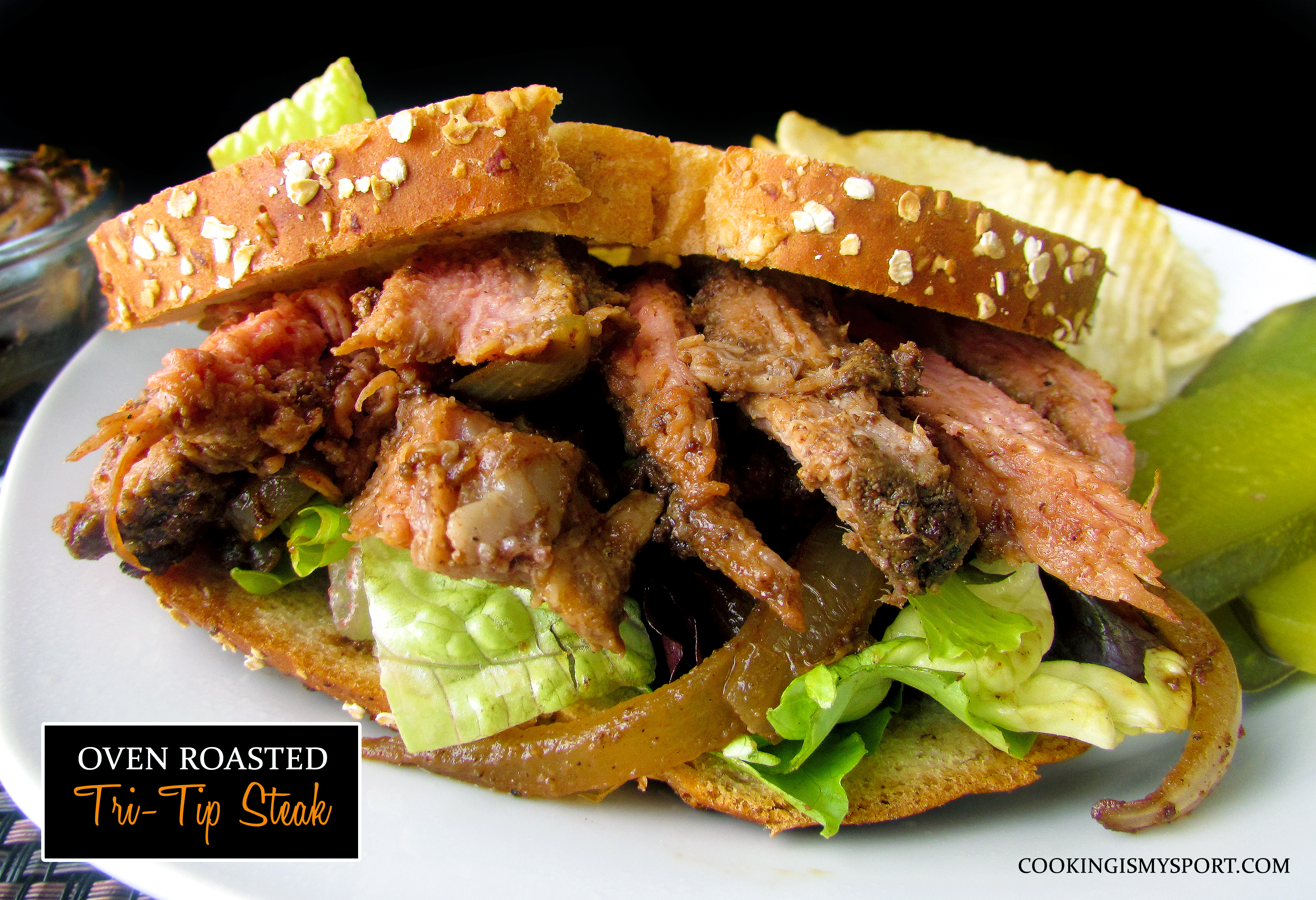 Regardless of how you like your steak/burger cooked, the tri-tip is a cut that IS supposed to be cooked on the red/pinkish side. I don’t want to say it should still be bleeding by the time it’s done (after all I do take my steak/burgers  medium to medium well). But, this should still be somewhat…leaky. You cook it past medium and you’re in the danger zone of nuking it into leather. Now, if you’re a professional chef you MIGHT be able to guess-timate the exact moment when to take this out of the oven, let it rest (during which the temperature of the meat rises and continues to cook while the juices redistribute and settle), and slice it. But, most of us aren’t pros, and therefore, should rely on the trusty instant read thermometer that will tell us EXACTLY when the beef is at the right temp to take out of the oven. (Plus they’re very inexpensive and can be found at Target/Walmart/Marshall’s/Amazon so there’s really no excuse for you not to have one.) 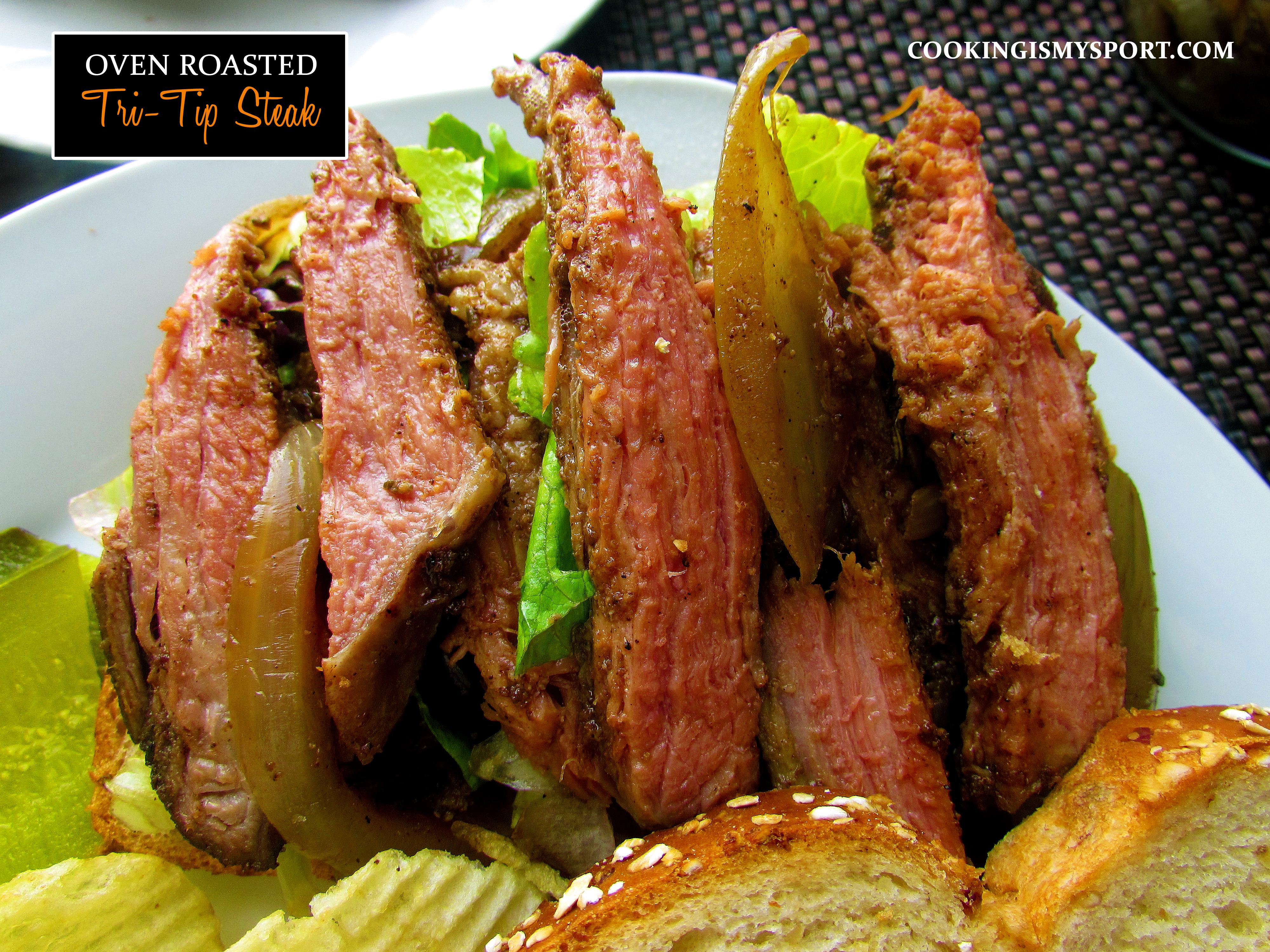 I don’t know which I love more about this recipe: that it was an inexpensive way to hit the spot of my rare but strong craving for red meat, that it was so easy to put together with minimal ‘labor’ involved, or that it tasted so good. Why don’t we just call it all three?

Coffee and beef are a great combination and the coffee in this rub really does stand out nicely. The paprika and cumin give it an earthy, smoky flavor, while the other ingredients balance it out with sweetness and spice.  What this yields is a slab of meat that will more than deliver either an epic steak salad, steak sandwich or just a killer hunk of beef.

Believe me, I’ve had them all.

Linking this up to Fiesta Friday #168, co-hosted by Petra @ Food Eat Love and Lina @ Lin’s Recipes this week.

Remove the silver skin and trim the excess fat from the steak; it’s fine if there is still some marbling on the surface.

Rub the soy sauce and beer into the meat so that it seeps inside. Rub the spice mixture evenly into both sides of the meat. Refrigerate for at least one hour, preferably overnight.

Heat the oil in a heavy Dutch Oven or pot over high heat. Sear the Tri-Tip on both sides until a dark crust has formed, about 3 to 5 minutes per side. Spray a  broiler rack or oven rack with cooking spray and place it over a sheet pan that you line with aluminum foil.

Place the meat on the rack and roast in the oven until the thickest, most center part reads about 140-145 degrees Fahrenheit. Don’t allow it to cook for too long: this cut of meat is supposed to be reddish/pink.

Allow the meat to rest for about 10-20 minutes before slicing against the grain.