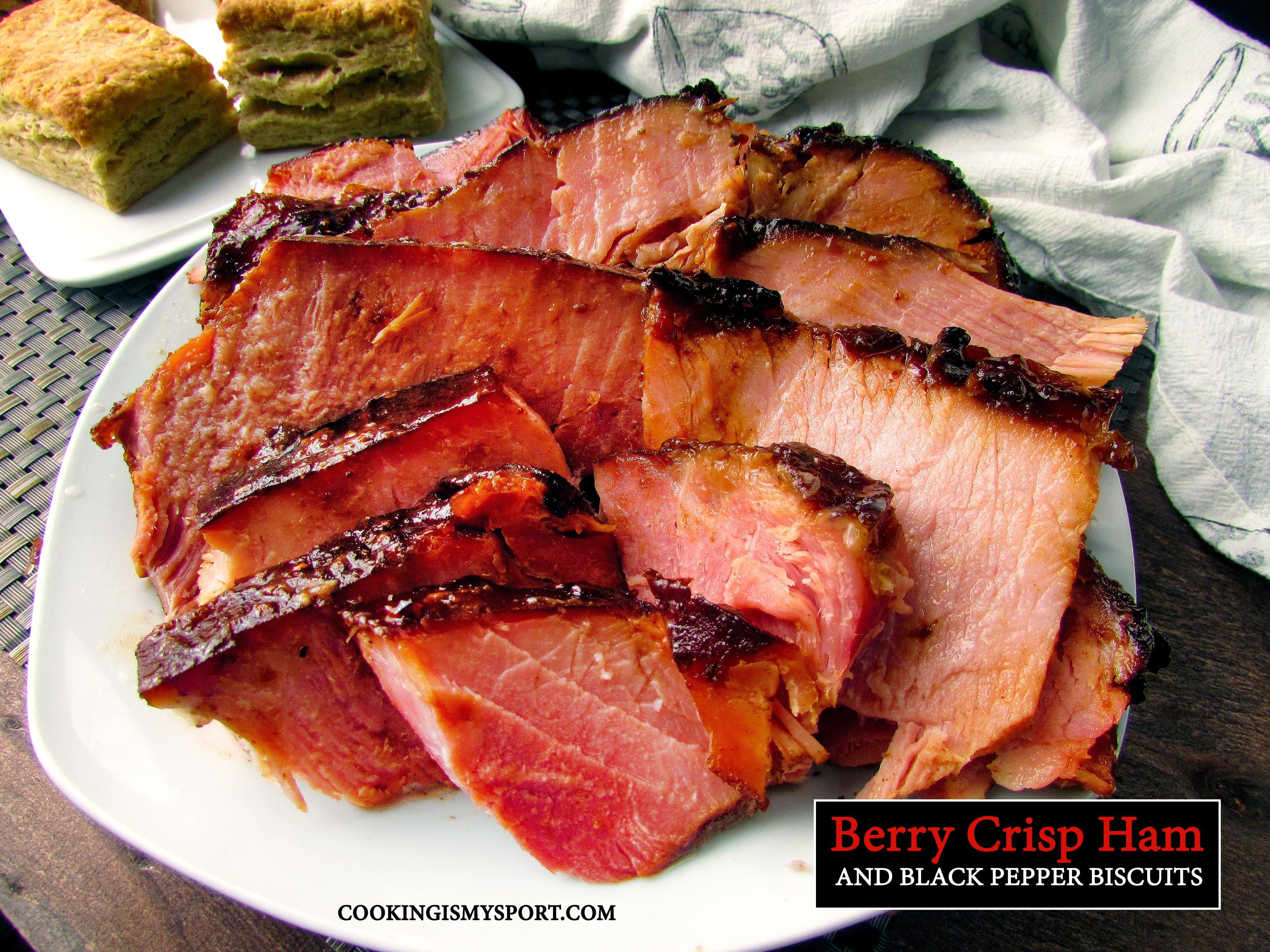 I think that this may be the first time ever that I’ve been away from my mom on Mother’s Day. It’s certainly the first time I’ve been over two thousand miles away. Feels weird. I miss her. I wish I was back in the Mitten sometimes, but especially times like now so that I could cook my mom a good meal as a way of showing her that I do love and appreciate her.

For any of my followers that are also far away from their moms on Sunday,  if your mother has passed away, or if you just don’t have the kind of relationship with your mom that you’d like to and the holiday is difficult for you–I’m sorry for that. I hope you can find a silver lining to the day.

Food has never failed to be one for me, so let’s focus on that for the moment.

Today’s recipe was actually the meal that I made for us on Easter. However, I thought it would work this week just as well. It also piggy-backs on last week’s where I shared the second best biscuit recipe I’ve ever had or made. I do hope some of you were able to give it a try like we both know you wanted to. But if you’re STILL dragging your feet and putting it off, maybe this week’s recipe & pictures will finally put the boot in your rear and make you just do it already. 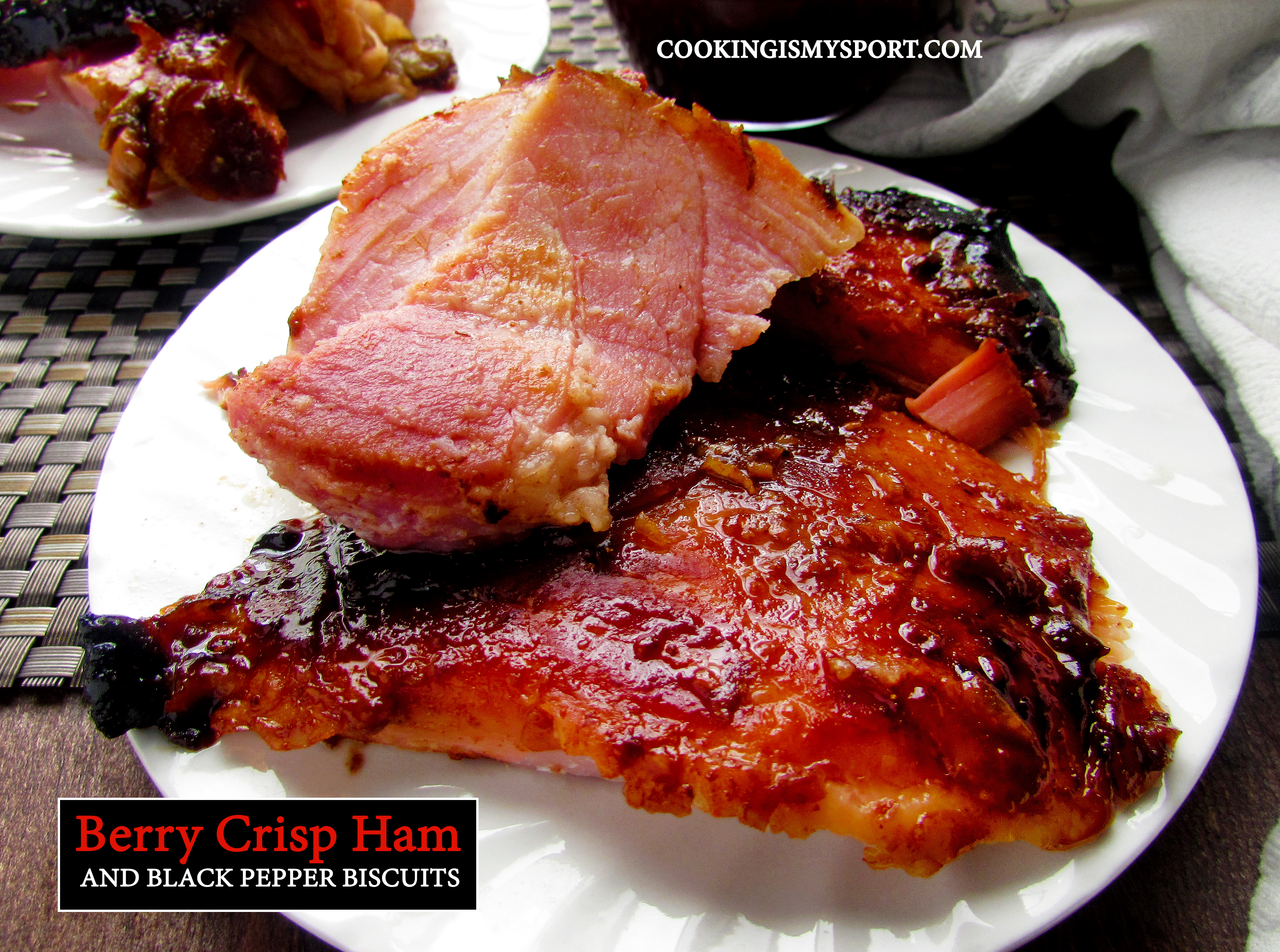 Bargain shoppers know that the closer you get to major holidays like Thanksgiving, Christmas and Easter, the better price you can get for the huge ‘roast’ style cuts of meat like whole turkeys and hams in grocery stores. We haven’t had ham since Christmas and since we do enjoy it,  I knew for sure that I was going to wait until the last minute to buy an inexpensive one to make for Easter dinner. I just wasn’t sure of how and with what else to serve it with. 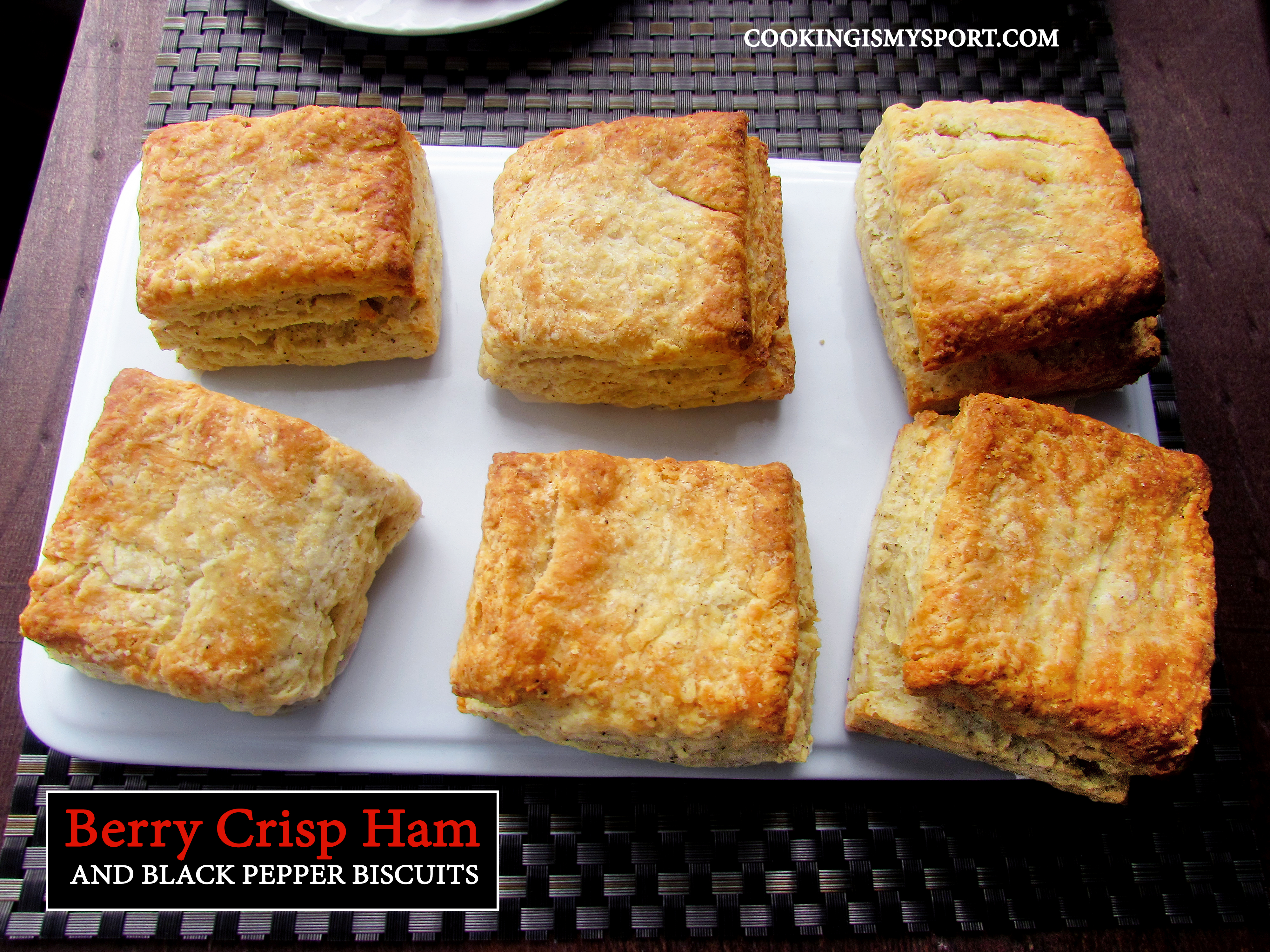 It didn’t take very long before I made up my mind. I’d been craving breakfast for dinner for a while. Since it’s just the three of us all the way out here I thought that that would be a simple, yet delicious celebratory meal: Easter Brinner.

I for one, just couldn’t imagine having a real ham brinner without the biscuits. So, I didn’t try. I cooked a ham and a batch of the newfound biscuit recipe that I was still swooning over and still wanting more of after they were gone–with some modifications that in my opinion, made it even better. 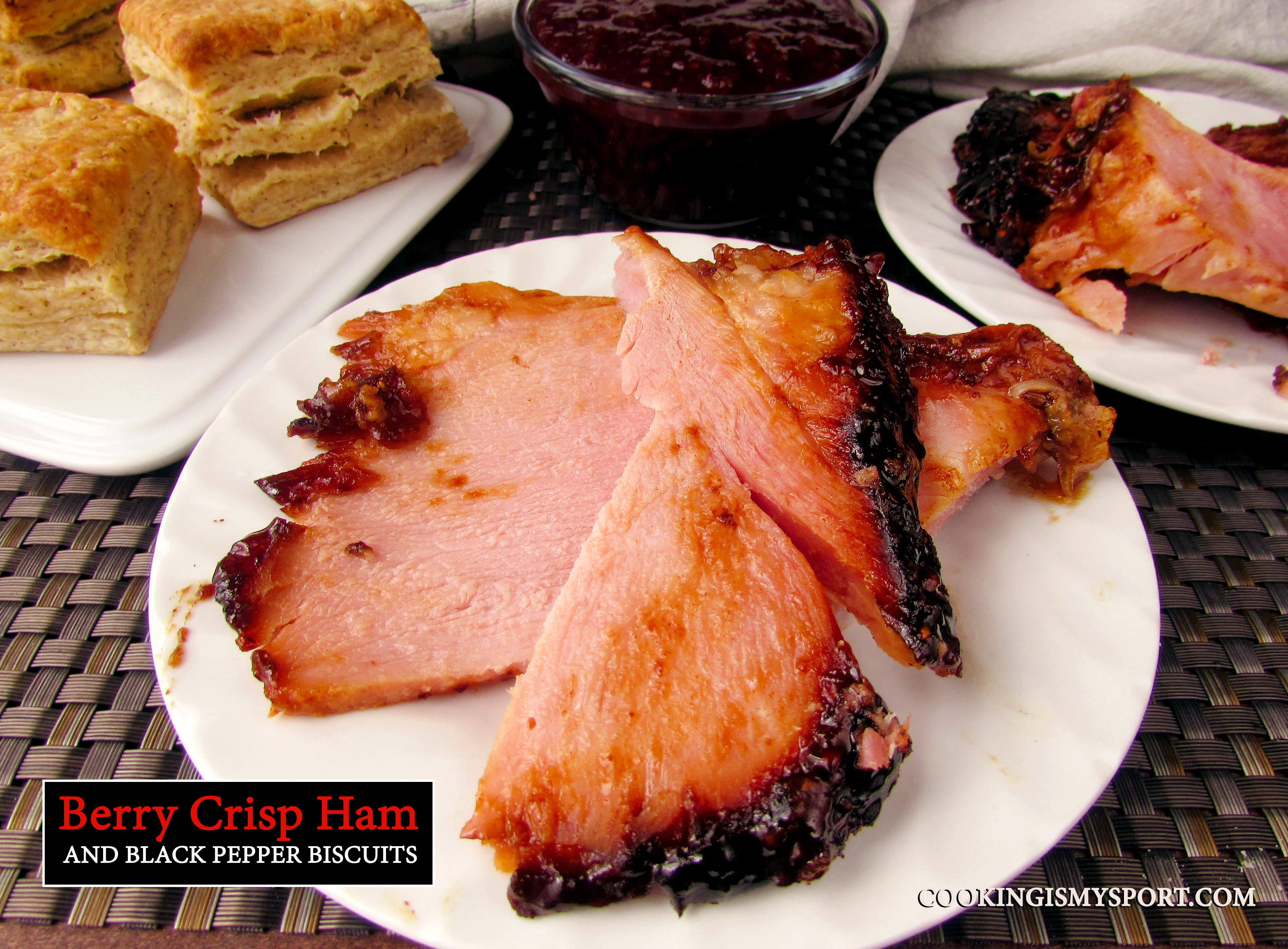 First off, I loveloveLOVE this ham. The rub I put together is sweet, zesty and with just the right amount of aromatic ‘kick’ from the cloves and nutmeg. It pairs just right with the berry glaze that gets brushed over the ham while it warms up and causes it to form that dark, bark-like, sugary crust on the outside. Using a standard/spiral ham is also pretty impossible to mess up as the thing is already cooked in the first place. So long as you don’t dry it out, which if you follow the baking time, is extremely difficult to do, it should turn out great. 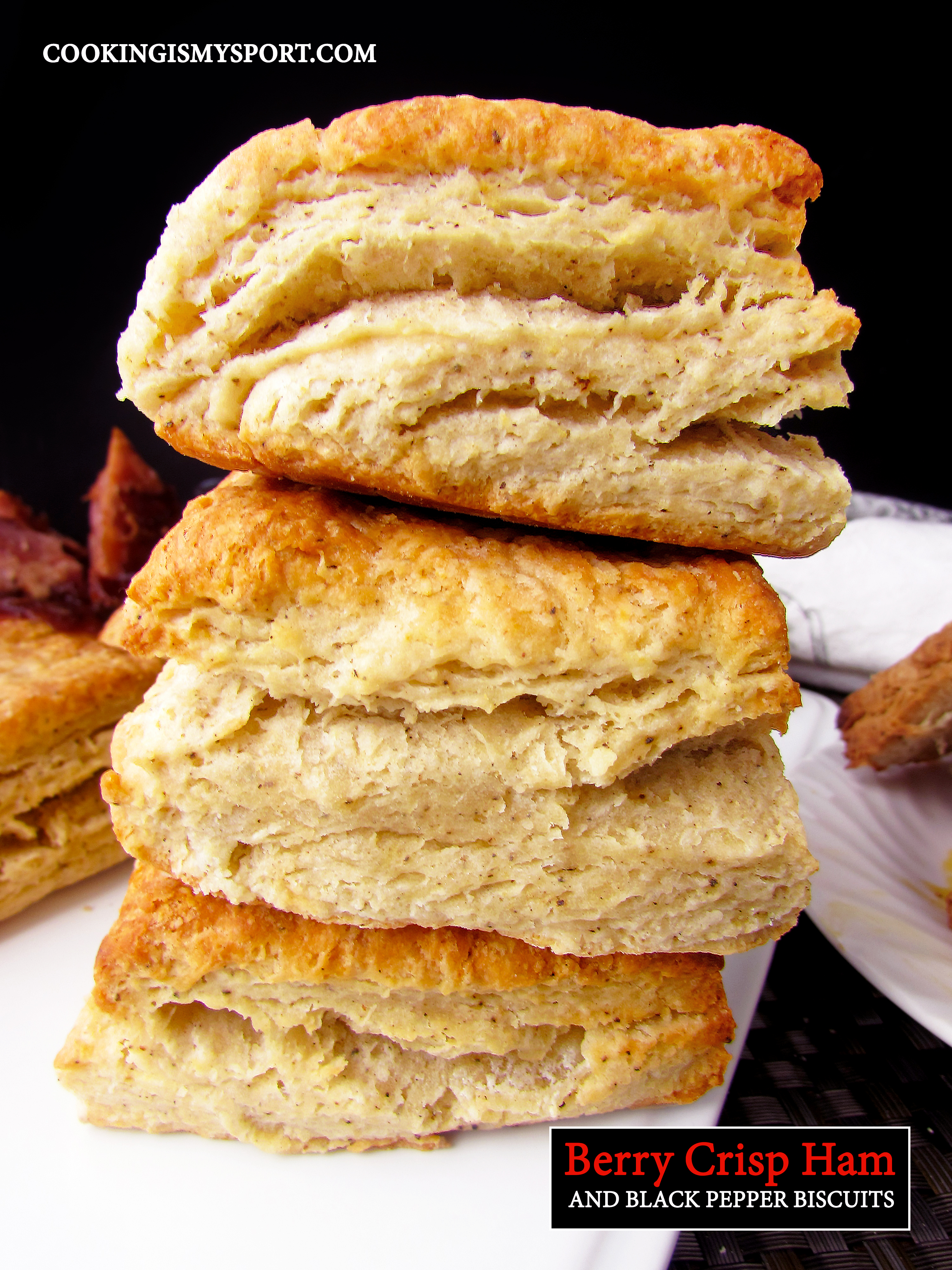 The first time I made these biscuits, I left them plain, without any major seasonings added to the dough outside of some sugar and a tiny bit of salt. They were definitely delicious enough on their own. However, for Easter I did want to try and mix things up and see if they could be improved upon. I was right. They could. Best part was, the only changes I made from the original was the addition of 2 ingredients: black pepper and bacon drippings. 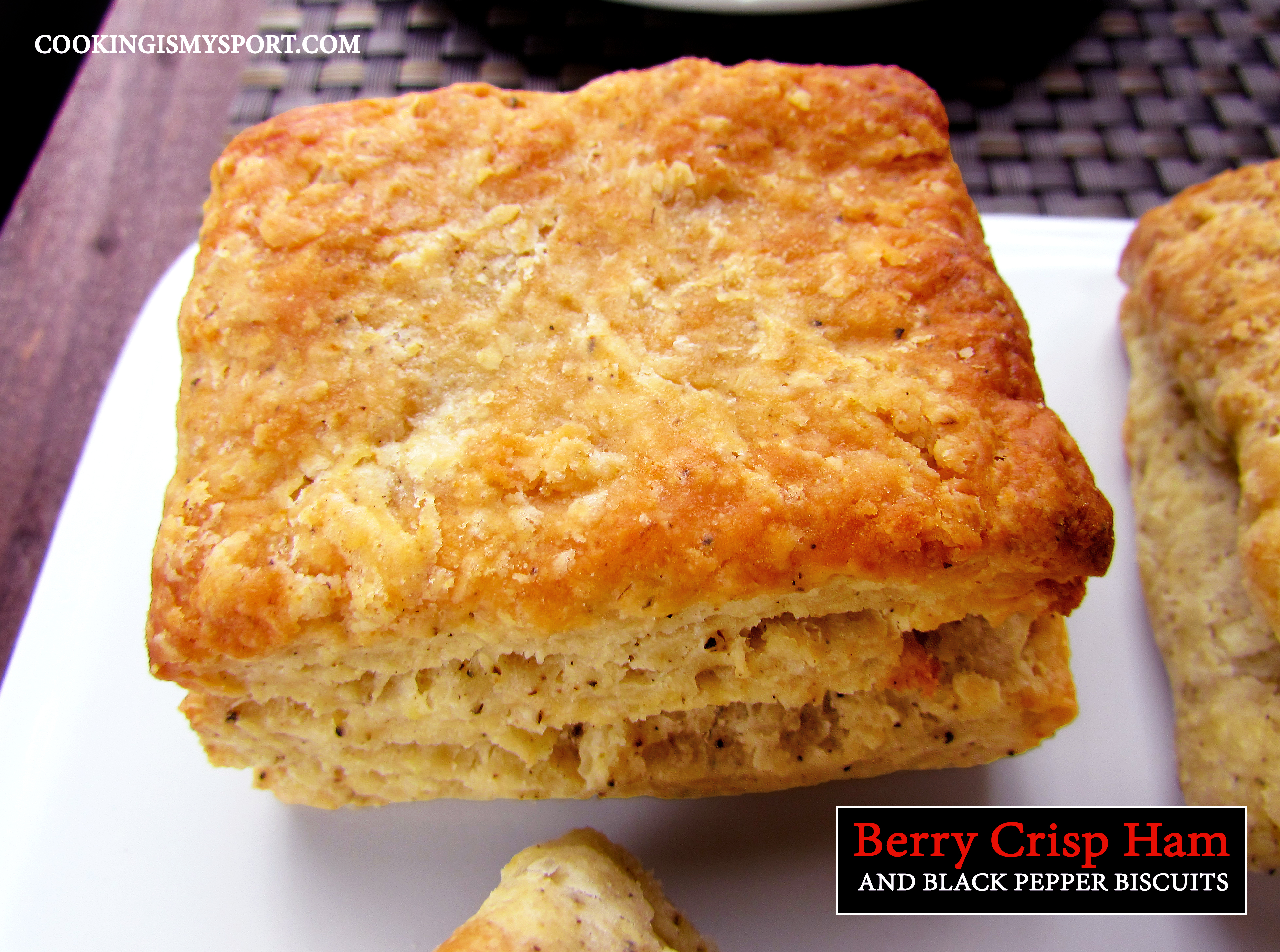 Just two simple ingredients and WHOA. They really did elevate the biscuits in not only flavor but the appearance. Although it’s definitely visibly flecked throughout the dough, the pepper isn’t overwhelming. Promise, it really isn’t: so do use the whole tablespoon. The biscuits also browned more evenly across the top and bottom and the layers were more pronounced than they were the first time I made them. The edges became perfectly crisp while the inside stayed light and fluffy. This  is just how biscuits ought to be.

Black pepper biscuit, sliced in half. Ham. A fried egg cooked just to where the egg white has set and the yolk is still runny. Smear both sides with the ham glaze. Smash it all together into one. This kids, is the best breakfast sandwich that I’ve ever had, bar none. And it was my Easter Brinner. (Actually, I loved it so much that I ended up having two, but mind your business).

I only wish I was back home so I could make this meal for my mom. I kinda think she’d be pleased with it.

Happy Mother’s Day and Fiesta Friday #171, where I’ll be linking this post up to.

Place the ham in a large roasting pan. Using a sharp knife, score the outer skin in crisscross pattern, being careful not to pierce the actual meat. Rub the spice mixture evenly over the skin with your hands. (It may get messy, and it may not all stick to the ham. That’s fine. The excess will form a syrupy sauce in the bottom of the pan as it cooks;  yum.) Pour the chicken broth in the bottom of the pan. Cover with aluminum foil and bake on the bottom rack for about 1 hour and 20 minutes, or until heated through (inner temp should be near 140 degrees F.)

Meanwhile, pour reserved ham liquid, OJ, jam, berries and honey in a saucepan and bring to a boil. Reduce to a simmer and allow to cook for about 15-20 more minutes until syrupy, stirring occasionally. Take off the heat, and brush some of the glaze over the ham as it cooks.

Remove the cover from the roasting pan and crank oven up to 425 F. Allow ham to cook for about 20-35 more minutes until the skin gets crispy, brushing/basting with a bit more of the glaze. Remove from the oven, cover with foil again and allow to stand for about 10 minutes before slicing and serving with the extra glaze.

For Biscuits: Keep oven at 425 Degrees Fahrenheit. In a large bowl, combine the flour, salt, baking powder, pepper and sugar with a fork.

Using the large holes on a box grater, grate the butter into the dry ingredients and stir a few times to combine. Make a well in the center of the bowl. Add the bacon fat and pour the buttermilk into the well and use a large rubber spatula to stir the mixture together. If it seems a little dry you may add additional buttermilk until it forms a shaggy dough.

Sprinkle a pastry mat, wooden cutting board or wax paper with flour. Turn the dough out onto the surface and pat a few times with your hands until it loosely holds together. (Don’t knead it too much or the warmth in your palms will melt the butter and cause the biscuits to be tough.)

Pat and roll the dough into a rectangle. Take the two opposite ends and fold them together like a business letter into thirds. Flip it upside down and pat & roll it into another rectangle, sprinkling the surface with flour if it gets too sticky. Repeat the folding process two to three more times before patting it into one final rectangle.

Use a bench scraper or very sharp knife to divide the rectangle in half, then divide the halves into thirds or fourths squares (depending on what size biscuits you want).

Line a sheet pan with parchment paper and place the cut biscuits on it. Freeze them for about 30 minutes. In the meantime, fill a shallow pan with water and place it on the bottom rack of the oven.

Brush the biscuits with melted butter, then bake in the oven on the middle rack for about 15-20 minutes, until they’re golden brown on top. Remove from oven to a wire rack.