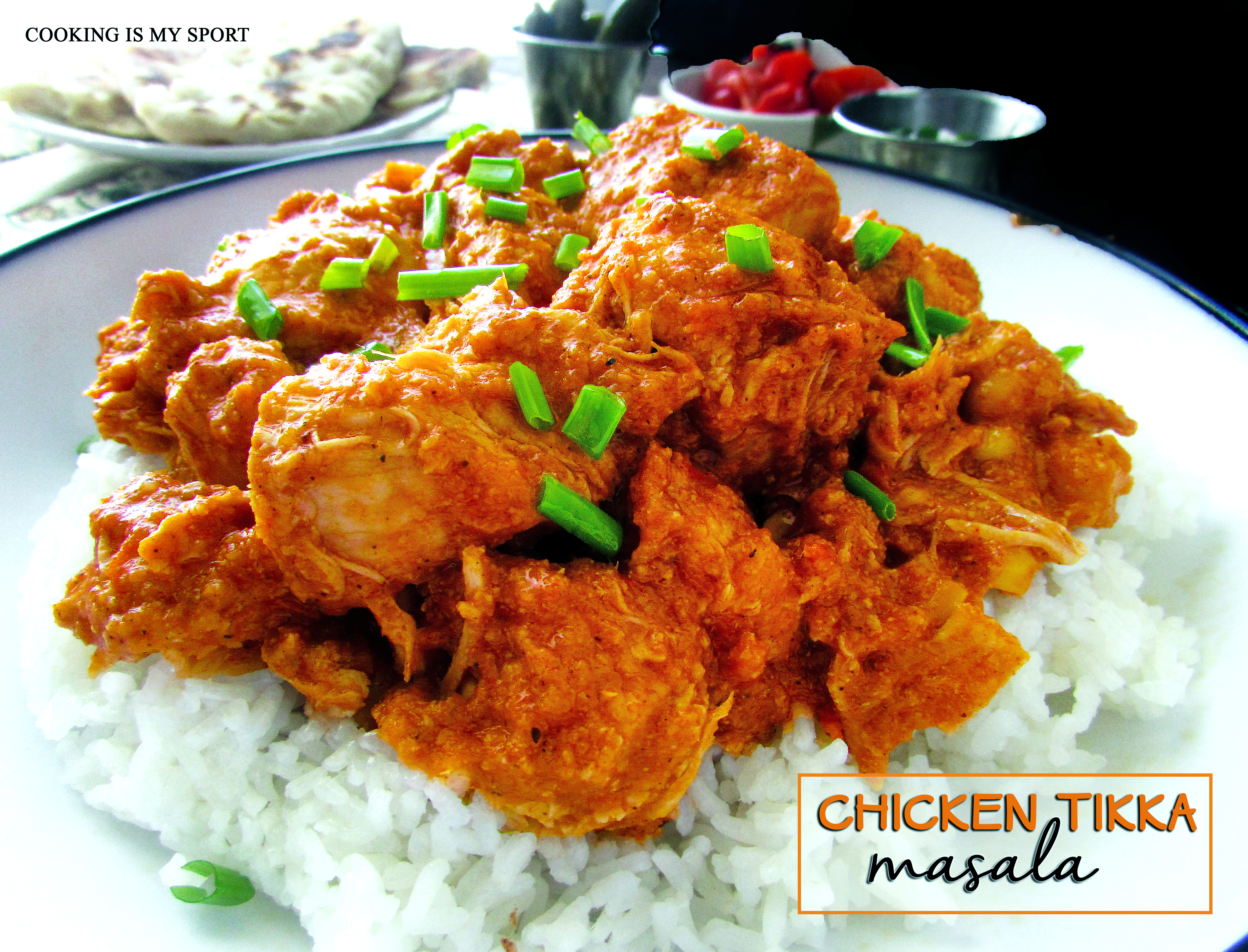 So I think I did a post a few months back telling you guys about how the pitcher and lid of my Ninja Blender died and went to Ninja Blender Heaven (i.e., they melted beyond repair in the stupid dishwasher of my apartment. Yes, I am still pissed off about that).

It took me a while to finally get around to going to the manufacturer’s website to go and order the parts for my replacement and when I finally did, I got yet another unwelcome surprise: the model of the pitcher and lid that I needed was temporarily out of stock and there was no EDT on when they would be in stock again.

Of course, this was something I wasn’t made aware of until AFTER I placed the order for them. Of course. 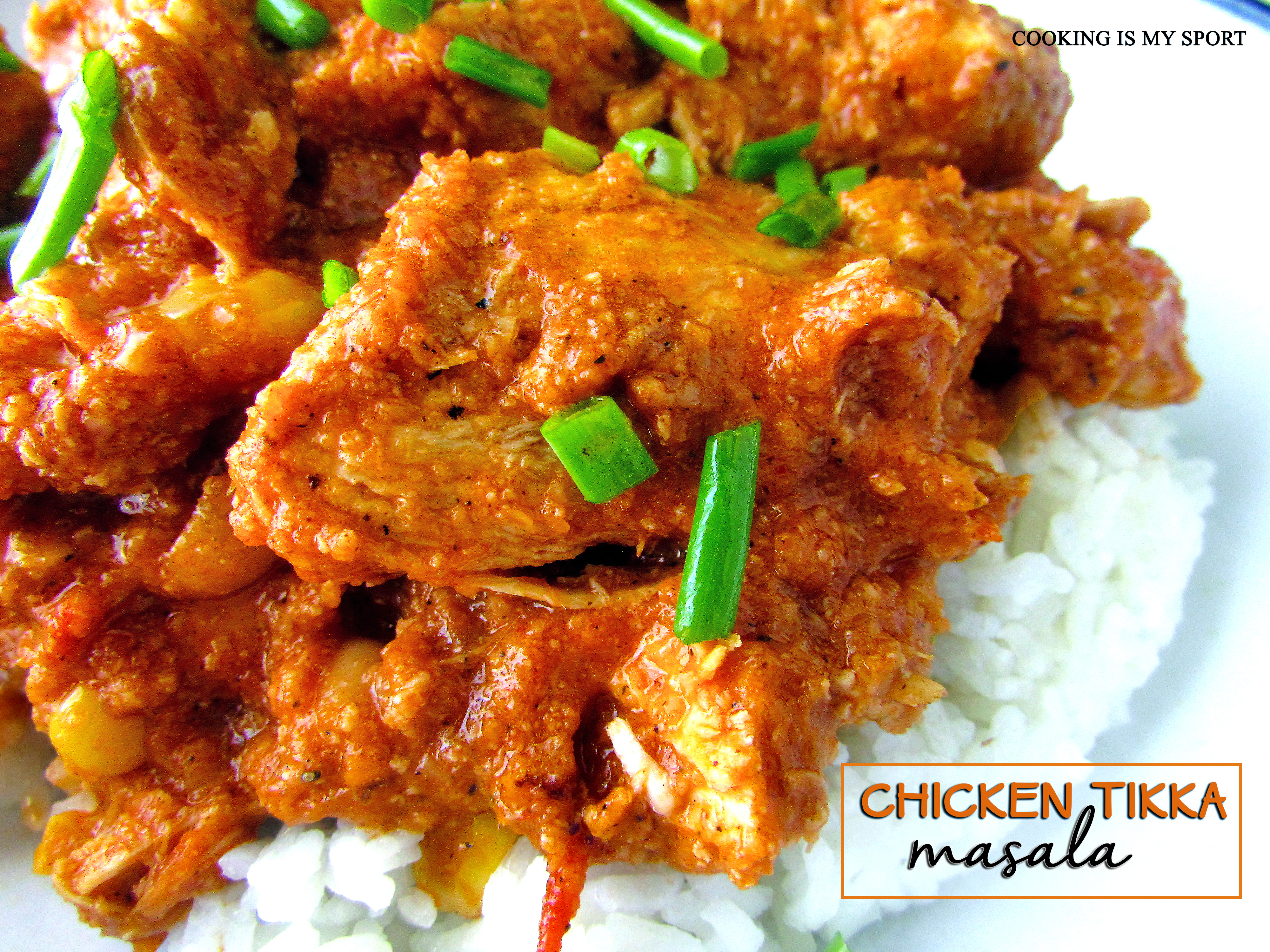 To the company’s credit, they didn’t actually take the money out of my account until roughly about 3 weeks later when the pitchers were back in stock. A few days later and boom, the package came in the mail and I once again had a Ninja Blender that I could use.

I was relieved, because God knows the motor stand had been looking uber stupid by itself on my countertop for the past three months or so.

Now that I had my Blender back, I already knew the first thing I wanted to use it to cook. It was a recipe I’d seen a while back and gotten SUPER excited about…then got SUPER disappointed over because it would require the use of either an immersion blender or regular blender. Neither of which I had access to. 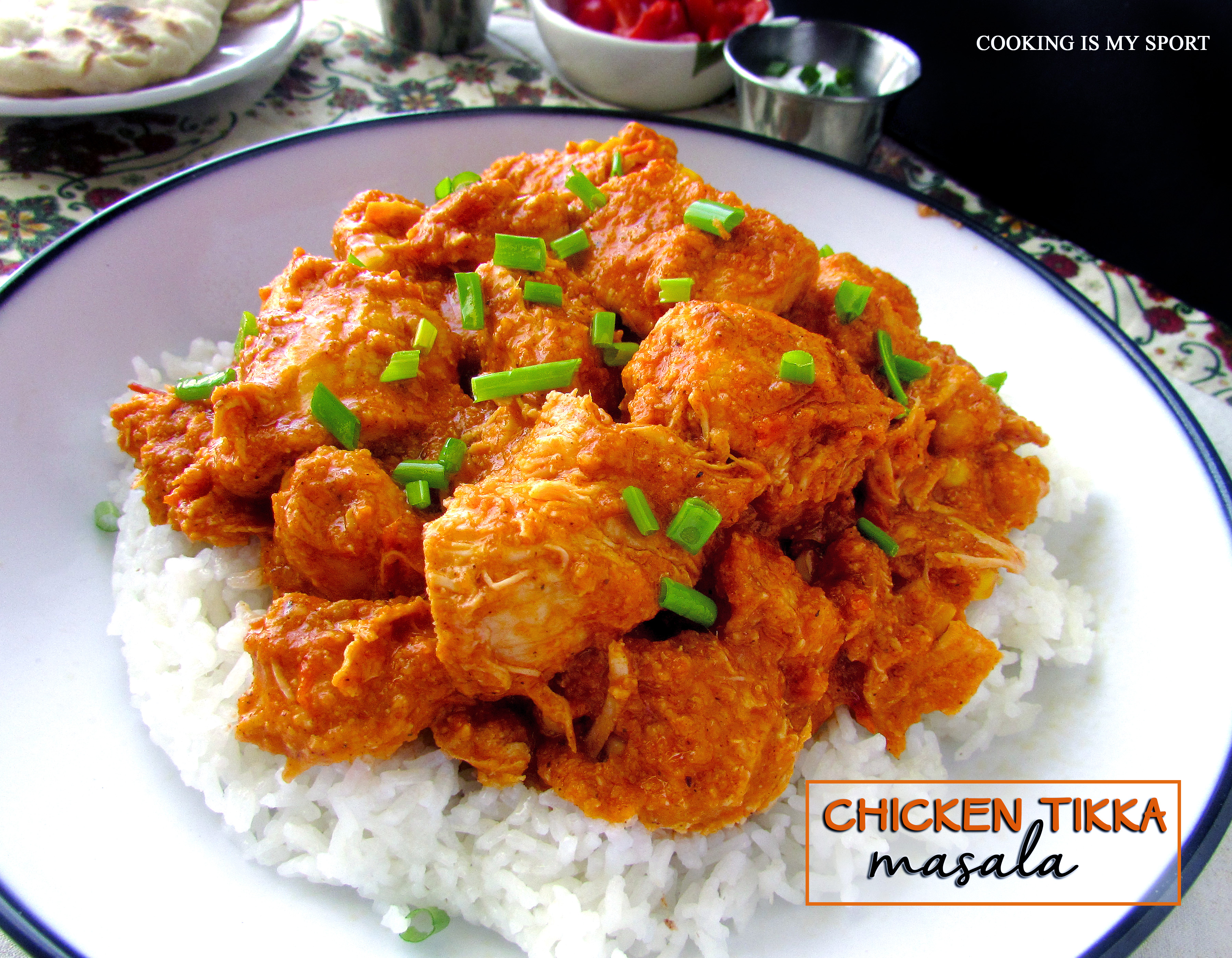 Aarti Sequeira is still to date, my favorite of the winners of Next Food Network Star with Jeff Mauro coming in a close second. She’s just so bright and effervescent and it translates into her cooking, which mainly centers around Indian cooking. Indian cuisine isn’t something I’ve done a lot of cooking with, but I always knew that when I did finally give it a whirl, my introduction was going to be guided by Aarti.

And as expected, she did NOT disappoint. 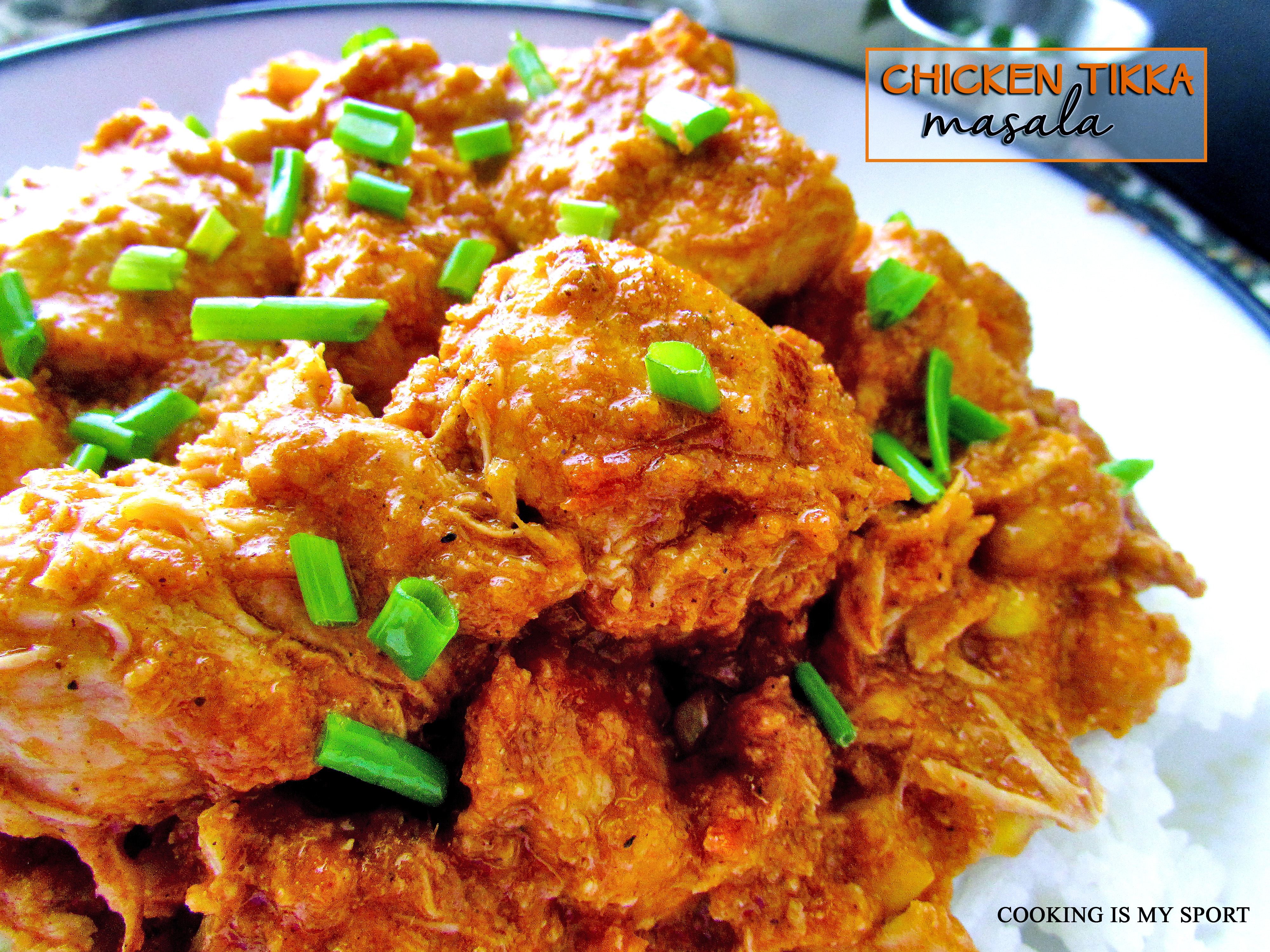 I don’t know why I seem to have a habit of using recipes that I’ve never made before to feature on the blog. It’s somewhat of a risk considering that it might not actually turn out. But as with the others, this wasn’t the time that that happened. My first attempt at Chicken Tikka Masala was…. successful.

As in “This chicken is long gone and I’m still thinking about and missing it like it’s an old friend” successful.

The thing is, you will need a blender (or at least a food processor to make it). The first application comes from throwing together a ginger-garlic paste used to marinade the chicken AND flavor the sauce of the dish. There is a substitution option given in the recipe for it but I’m pleading with you… if you’ve got the tools, just take the effort and initiative to make the paste. Please. Your taste buds will thank you. 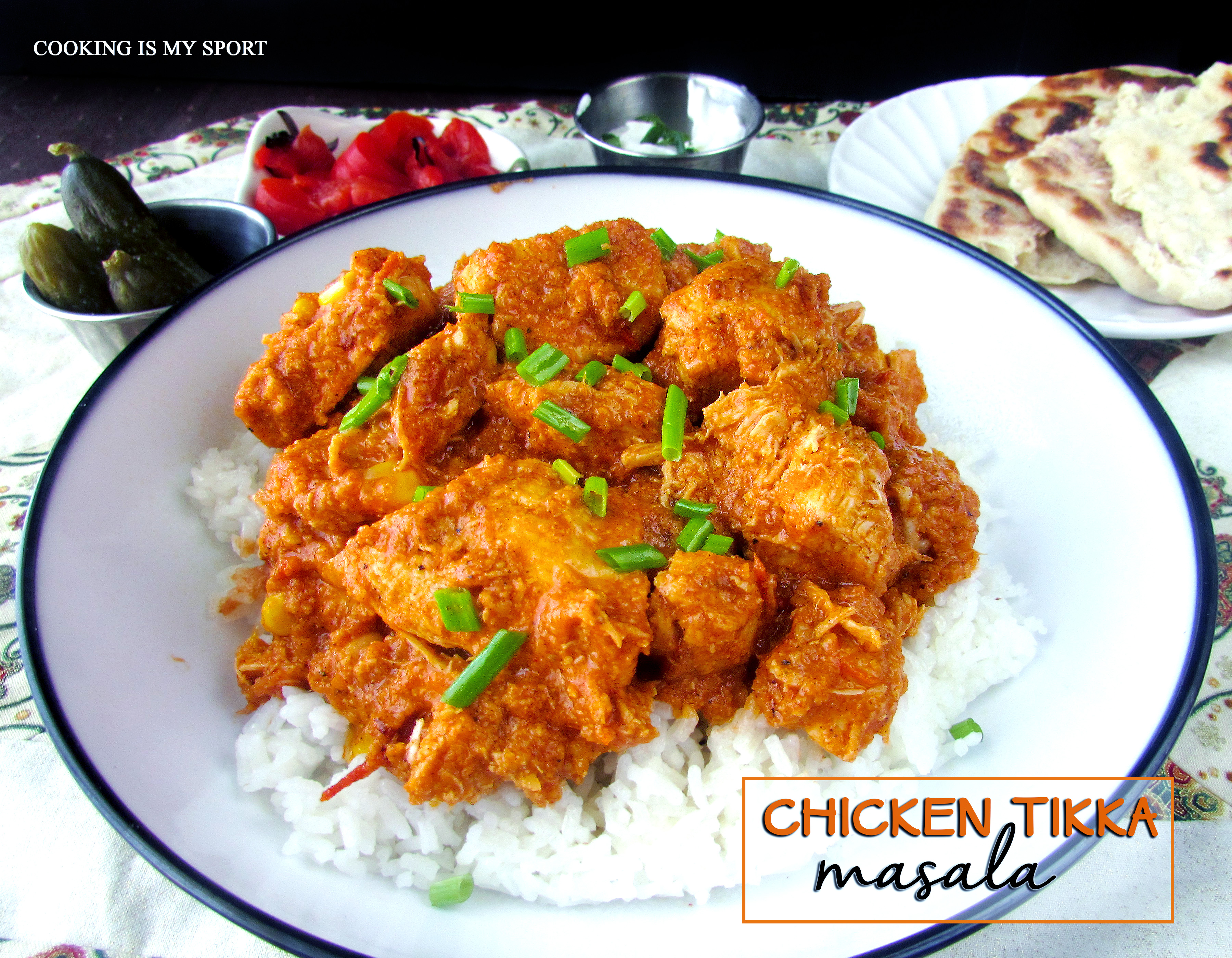 The second use of the blender comes in with pureeing the tomato sauce down so that it’s smooth. I didn’t mention this in the print out version of the recipe but I’ll go ahead and say it here: I have seen what happens when you put a hot liquid substance in a blender and crank it up high right off rip.

It ain’t pretty. Don’t do it. Before I even pureed the tomato mixture I took it off the heat and let it cool down for about 5 minutes or so. Even after that, I pureed the tomatoes in increments, and it only took about three blends before everything was ready. And most imporantly: I avoided making a HUGE mess. Just as you should.

My take on Chicken Tikka Masala differs from Aarti’s in several ways: number one, she used plain yogurt in her marinade. I don’t know, but whenever I marinade chicken in yogurt I am always predisposed to using Greek. I went ahead and did the same thing here and I don’t think it caused any huge issues.

Second, Aarti grilled her chicken before adding it to the tomato sauce. Most of you guys already know how grills and I get along (We Don’t. The End.), so I did go ahead and just sear my chicken in oil on the stove top. Once again: I think it was a perfectly fine substitution, but if you’d prefer to grill it, by all means do so. 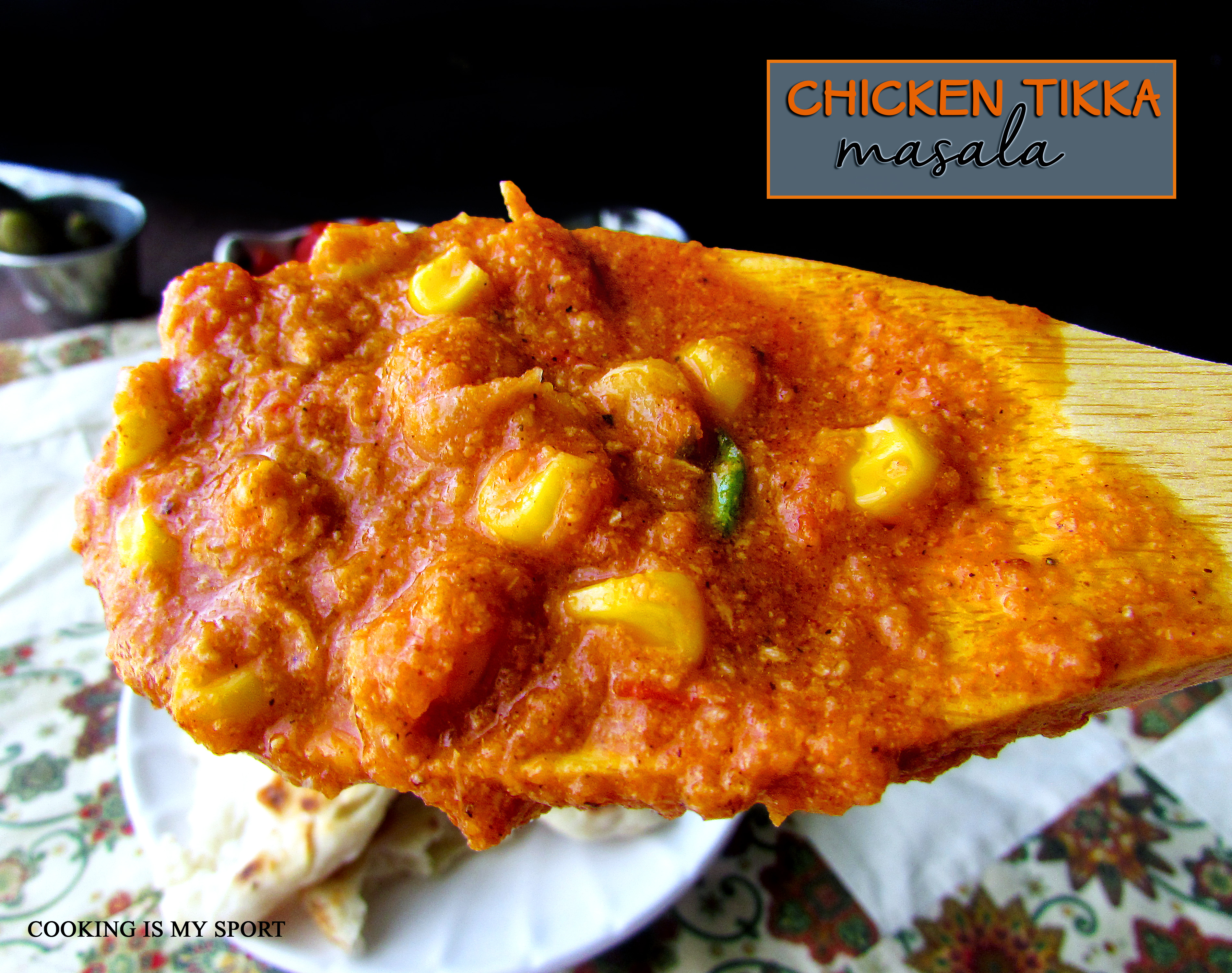 People stay hating on using chicken breast in cooking. I really don’t care. I know how to cook it so that it’s not dry and chalky and a hot mess soooo, I will always, ALWAYS default to chicken breast. Who’s gon check me, boo?

This dish cooks down to a stew like consistency and since I like extras in my stew, I went ahead and threw in a can of chickpeas to give the dish some extra protein. It was a good choice.

What can I say about the taste? Well I have to admit that going into making the dish I was worried about the acidity of the tomatoes overpowering everything else. That doesn’t happen. The Ginger-Garlic paste provides SUCH a strong and effective counter balance to the tomatoes. The chicken cooks down so nice and tender in the sauce–and I gotta say I think that Greek yogurt really helps in making it stay moist. Your tongue and stomach will just want to give you a great  big hug after you eat a huge bowl of this stuff. Mine did.

Oh yes! And eating bread on the side with this is just mandatory. Naan bread, preferably. Where are you supposed to get Naan you ask? Right here Silly Billy Gum Drops. Your’re welcome.

Happy Fiesta Friday #122 on this the first week in June!, co-hosted by Mollie @ The Frugal Hausfrau and Aruna @ Aharam.

Make the Ginger Garlic paste first: throw all of the ingredients in a blender together and puree until it is smooth. It’s okay if it’s a little chunky, but it should have a ‘pasty’ consistency. You may not need it all, but DO NOT throw out the leftovers. Save it in a small jar for the next time you make this dish (there WILL be a  next time, trust)

For the Marinade: In a large bowl, mix together the marinade ingredients. Add the chicken and toss to coat. Marinate at least 30 minutes, or in the refrigerator up to overnight.

Place a Dutch oven or heavy bottom non-stick pot over your stove top and place over  high heat with the oil.  Try to shake off as much of the marinade as you can with your hands, but don’t sweat it if the chicken’s not completely clean. When the oil is hot, sear the chicken in the pot until browned on all sides. If you used Greek yogurt, some of the remaining excess may form “curds” in the bottom of the pot. That’s ok, the heat will cook off the majority of it and the rest dissolves in the sauce. (Don’t worry that the chicken will still be a little uncooked, it finishes cooking in the sauce). When the chicken is evenly browned, remove from the pot and place on a plate, cover with foil.

For the sauce:  When you’re ready to make the curry, lower the heat of the pot down to medium heat and add the olive oil and butter (or ghee). When the butter has melted, add the Ginger-Garlic Paste. Saute until lightly browned around the edges. Add the tomato paste and cook until the tomato has darkened in color, about 3 minutes. Add the garam masala and the paprika and saute for about 1 minute to draw out their flavors.
Add the tomatoes, salt, and 1 cup water. Bring to a boil, turn down to a simmer, and cook until thickened, about 20 minutes. You may need more water depending on how much liquid the tomatoes give off.

Pour the sauce into a blender or food processor, or use an immersion blender, and process until smooth. Pour back into the pot and bring back up to a boil. Add the chicken and  chickpeas, fenugreek leaves or maple syrup, if using. Take the heat down to a simmer and cook for about 15-20 minutes or until chicken is fork tender.  Garnish with minced fresh cilantro, and serve over rice, with naan, or a crusty piece of bread!