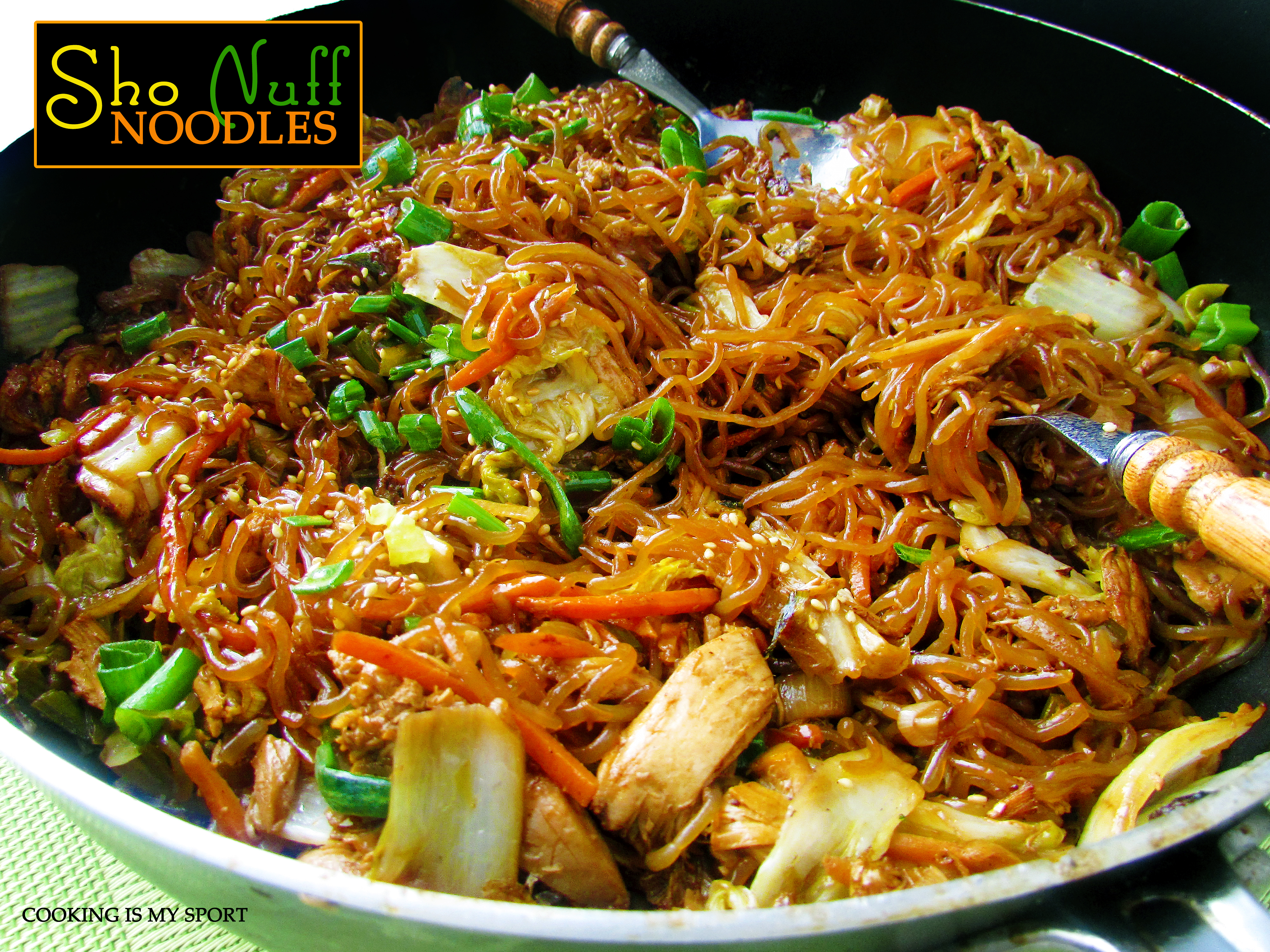 Am I the meanest? Sho’nuff!

Am I the prettiest?  Sho’nuff!

Am I the baddest mofo low down around this town? Sho’nuff!

Well who am I? Sho’nuff! 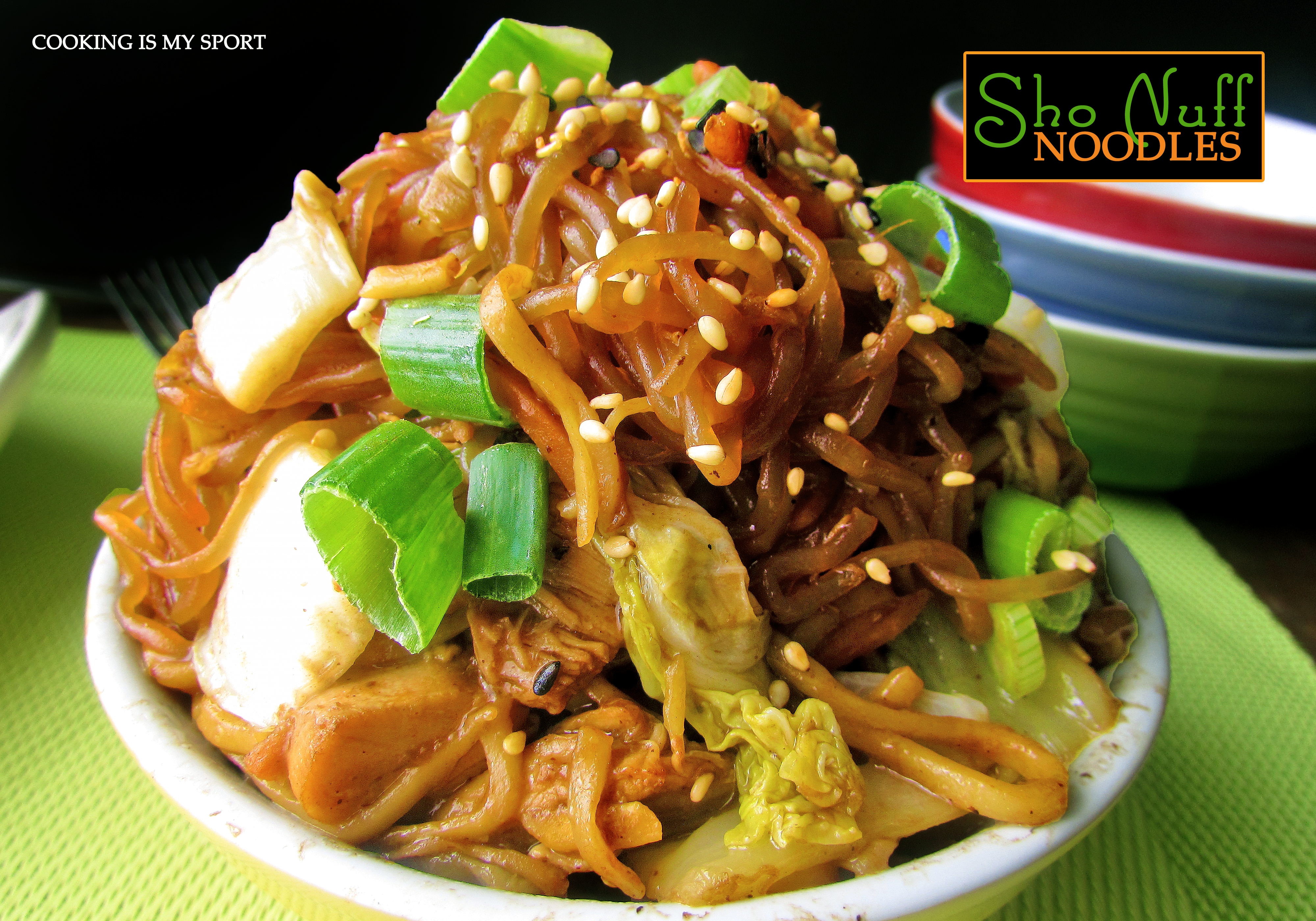 Oh, hi guys. Don’t worry, I’m not crazy or full of myself. The above is a movie quote. I decided to open up this post with the direct inspiration/reference for this recipe. Kudos/gold stars/props to anybody out there that knows it on their own. You and I would probably be best buddies if we knew each other outside of the blogosphere.

In 1985, record label executive and legend Berry Gordy and the folks at Motown produced a martial arts/musical movie called “The Last Dragon”. Although it wasn’t exactly a critical success at the time of it being made, it is now considered to be a cult classic of Black cinema. And rightly so; it’s one of my favorite films,especially when you’re watching with a crowd of friends who can quote the movie with you. 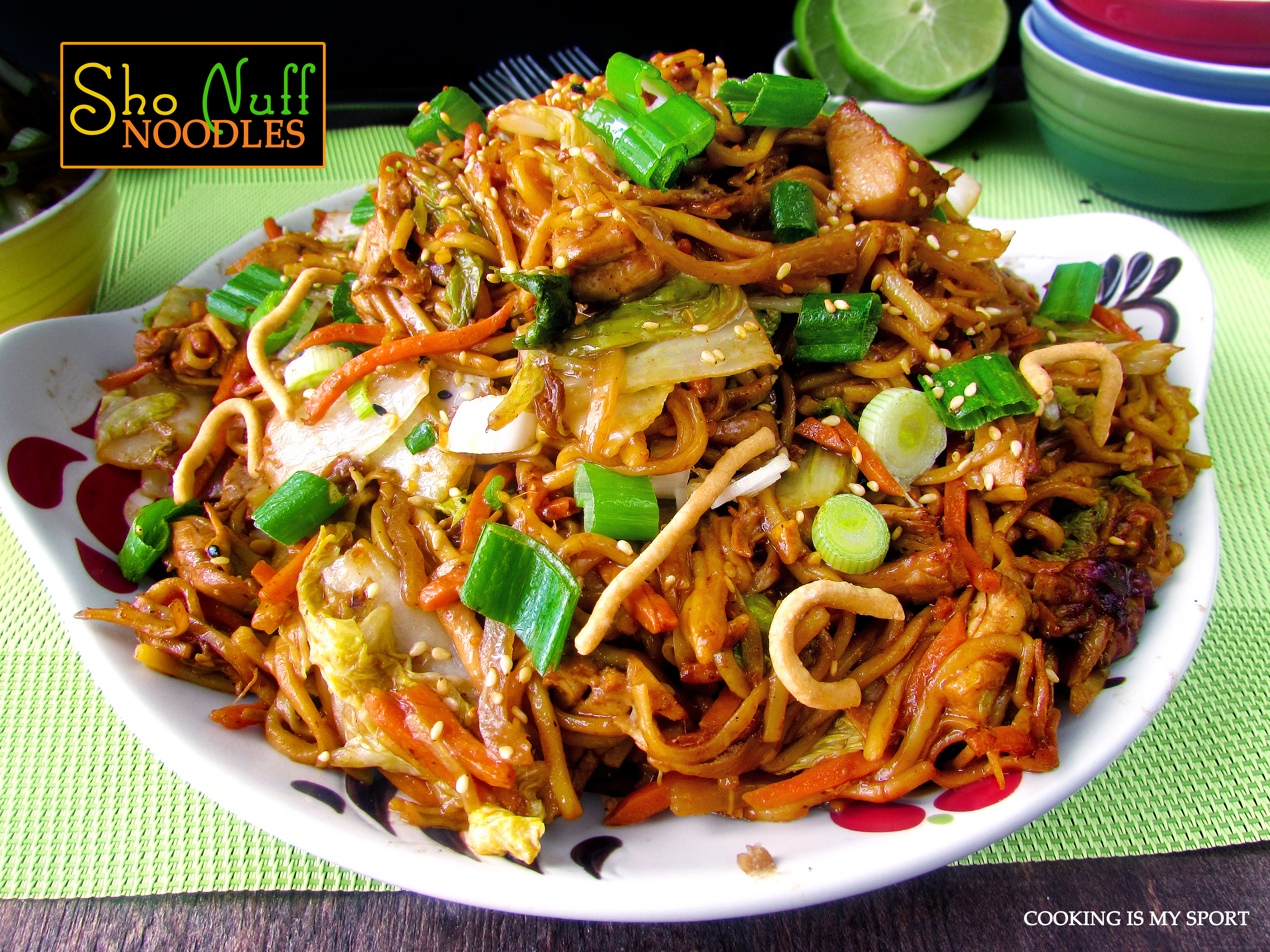 As it turns out, the film is also well-loved by one of my favorite celebrity chefs, Marcus Samuelsson. I follow him on Pinterest/Twitter and one day I saw a recipe pop up in my feed. It wasn’t just the picture that caught my attention, although that was mouth-watering enough to draw me in. It was also the name that he gave the dish that made me immediately want to look into what I would need to make it. Any “Last Dragon” fan worth their salt knows the name of the antagonist of the plot: Sho Nuff.  He’s the kung-fu neighborhood bully who is constantly challenging the protagonist, Leroy Green to a winner-take-all fight. He also travels around with an entourage of people, where he constantly makes them say his name like some kind of a pep rally cheer- hence, the quote.

Once I saw the dish, I knew I had to try it out just to see how Chef Marcus would translate the bold and bodacious personality of the character, into food. It’s not the first dish of his that I’ve tried to interpret and like all the others, this one did not disappoint either. 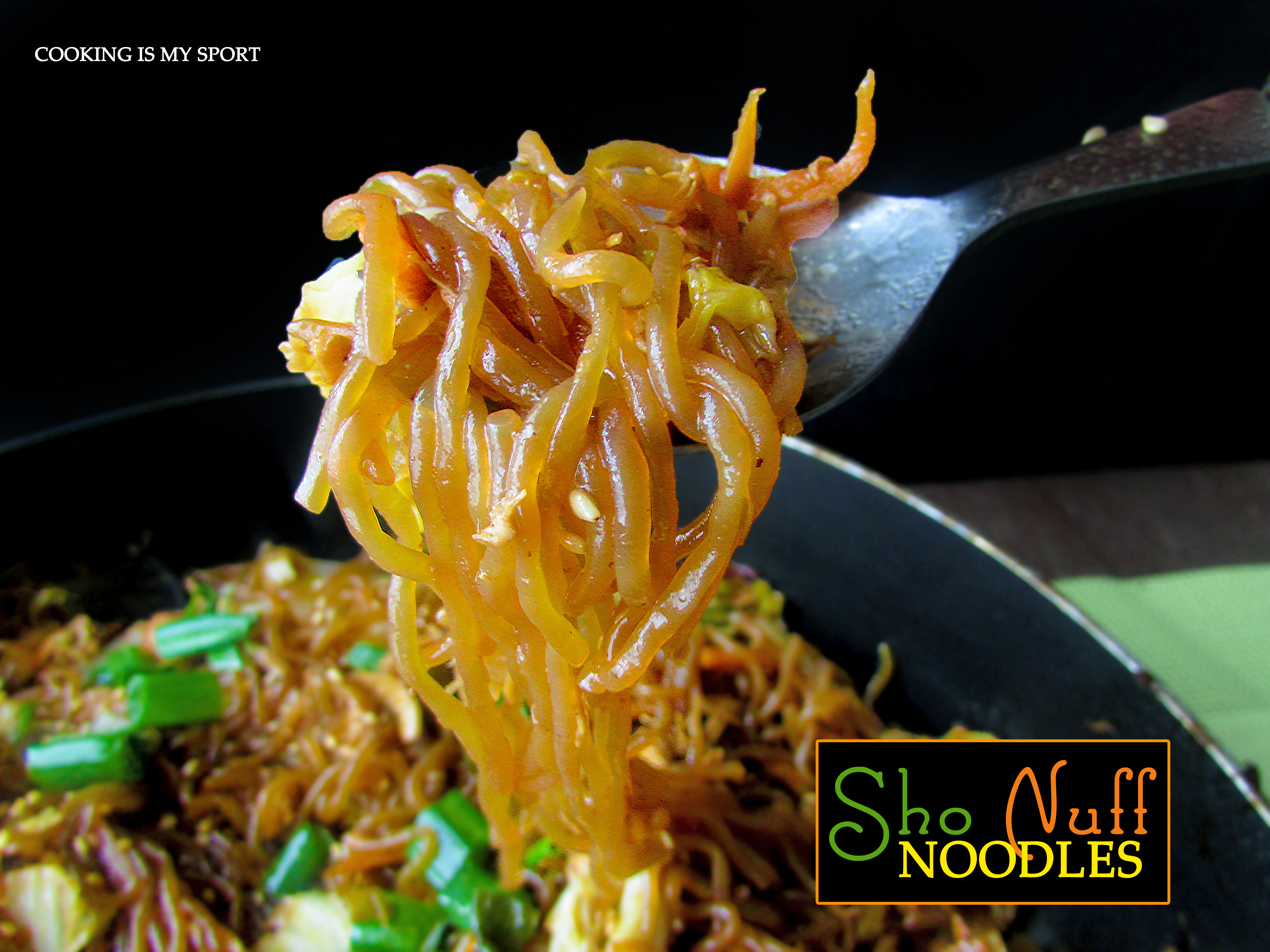 I will admit however, the one “draw-back” to this recipe is that in order to make it, you will probably need to purchase the majority of the sauce ingredients from an Asian market. If you don’t have one of those, then online ordering is gonna have to be the way to go. To be honest, I’d never heard of some of them before seeing this ingredient list– but I will say that when combined all together, they make a sauce that is friggin DELICIOUS. 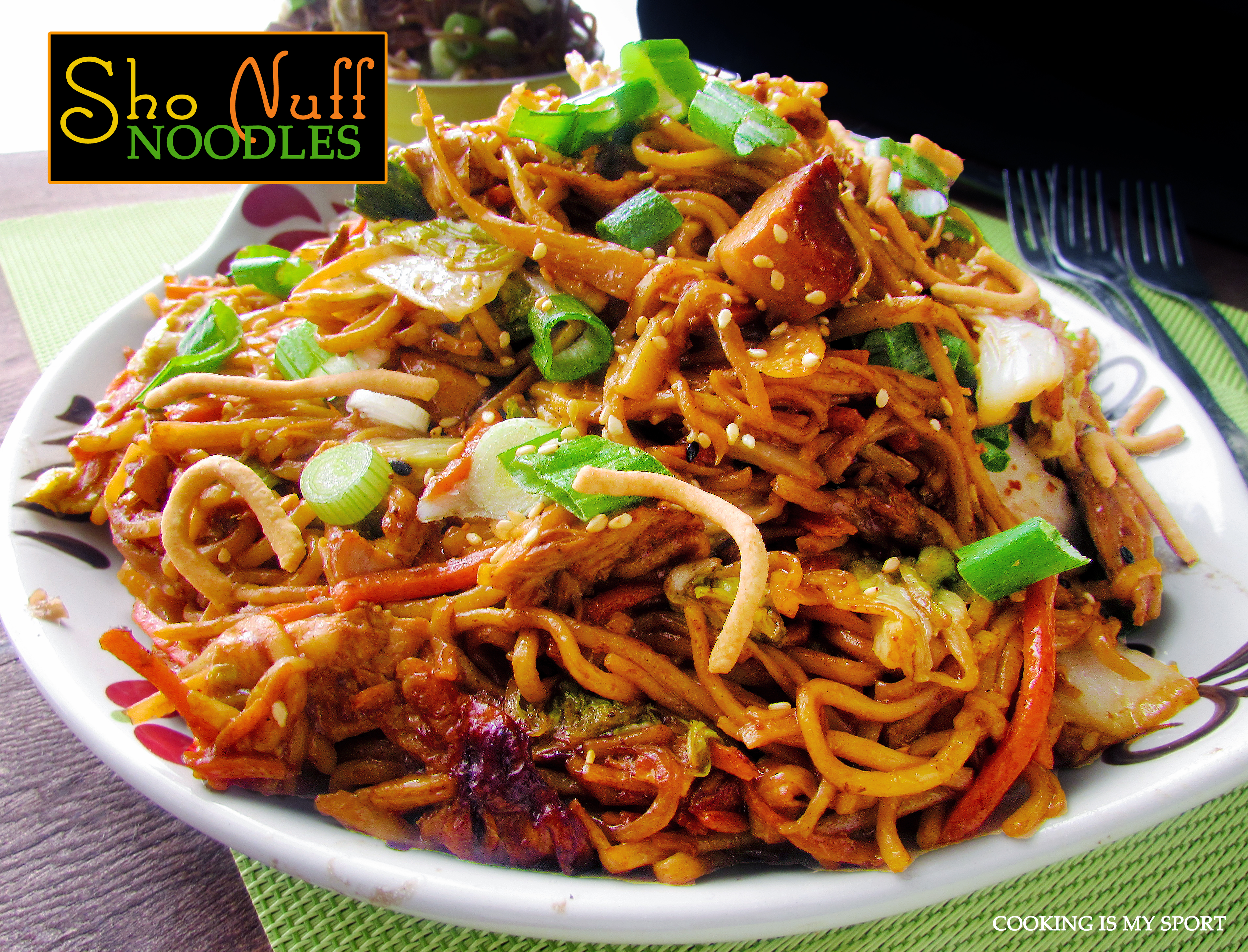 Another awesome thing about this recipe is that it’s versatile enough for those who are watching their carb-intake to still be able to enjoy it. So to adapt this recipe with my own personal spin, I took the liberty of making this dish with both regular lo mein noodles AND Shiritaki noodles. Both turned out fabulously and I’ve included the preparation directions for both in the recie. Also, because I’m also a carnivore you guys know I had to throw some meat in there for the added protein to make this more of a filling meal and less as an appetizer. Also, I threw in some sesame seeds because…why not?

Should you go the extra mile and make this dish? Sho Nuff.

Happy Fiesta Friday #119 and thanks to our co-hosts  Ahila @ A Taste of Sri Lankan Cuisine and Diann @ Of Goats and Greens.

Heat oil in a 12” wok or nonstick skillet over high; add cabbage, bok choy, and 2” scallions and cook until browned, about 5 minutes.

*If you’re using Shiritaki noodles: place noodles in a microwave-safe bowl and microwave on high for about 65-70 seconds. The noodles will be ready when the scent of the fluid they’re  packaged in is gone. If it’s still there after the first minute, you can heat them for another 60 seconds, which should get the smell out. Use a knife to roughly chop until they’re loose and untangled. From here, they can be prepared in the same way as regular lo mein noodles for this recipe.