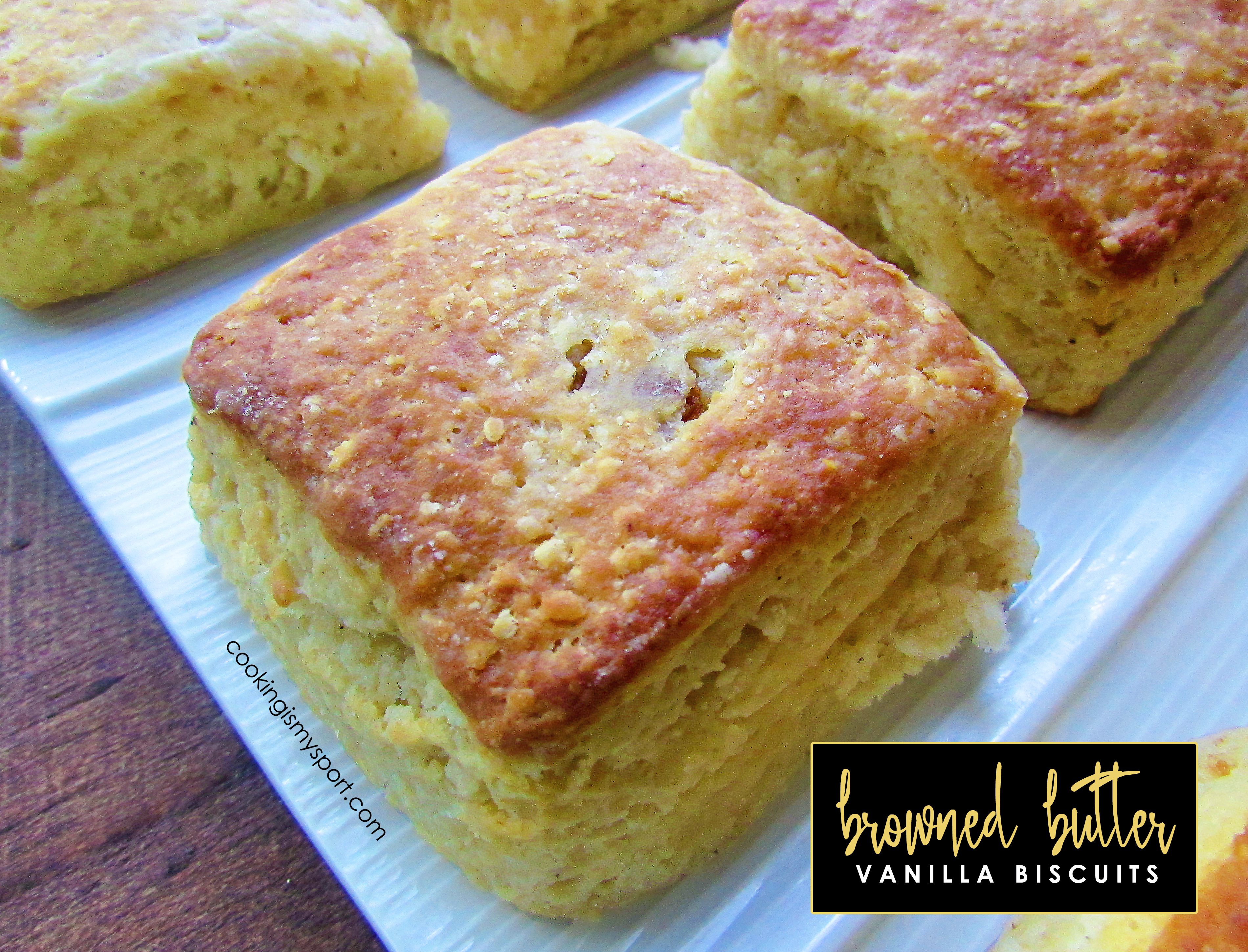 I think I’m starting to develop a problem. I cannot stop making and finding uses for browned butter. Literally cannot do it. I’m addicted.

The way things are going, I think I’m going to have to add a completely separate category to the Recipe Index JUST for browned butter recipes. 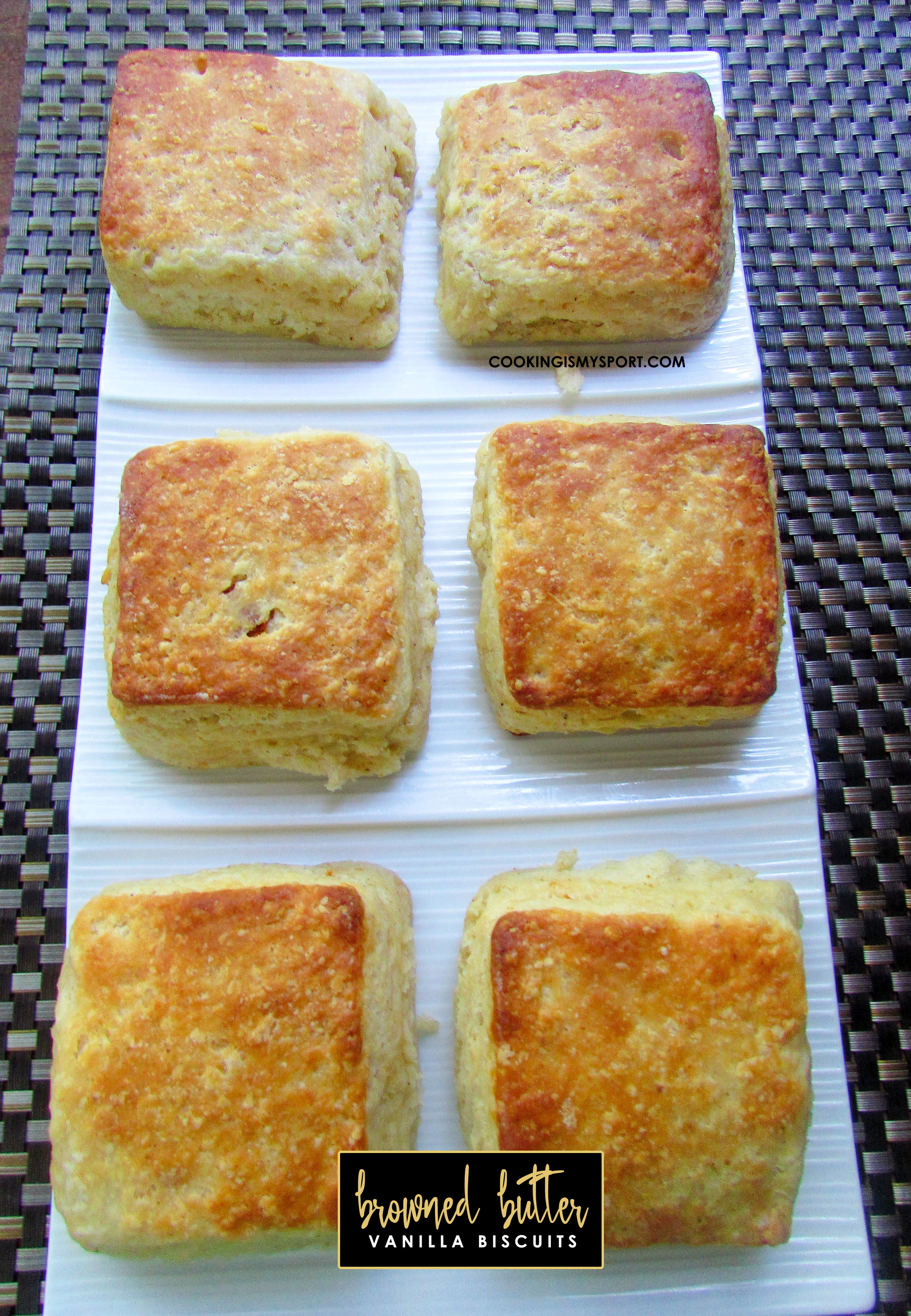 If you’re new here, then there are probably two things that you should know for the purposes of this post: first, browned butter is a sauce. Butter gets melted over low-medium heat until it separates into butterfat and milk solids. The solids sink to the bottom of the pan and toast over the heat until golden brown; that is browned butter. It is one of the greatest culinary inventions, ever. 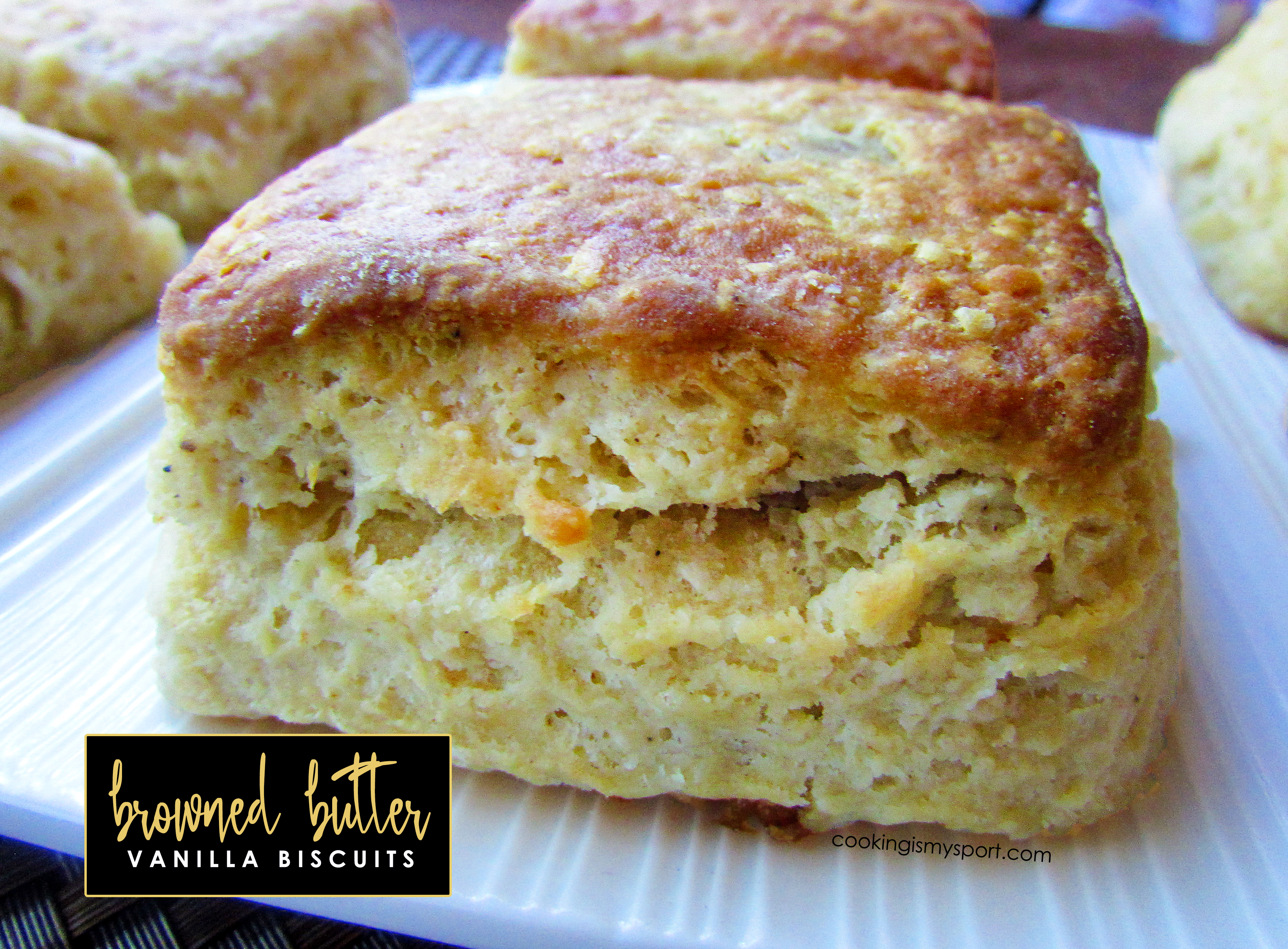 Second, I have been experimenting with it on and off on this blog for the past two and half years on this blog. Take practically any baking recipe you want that uses butter, and you can substitute the regular stuff for browned butter to kick up the flavor and taste 1000 notches. It works. Believe me, I’m on a personal mission to test and keep retesting the theory in as many different uses as I can and haven’t been disappointed yet. 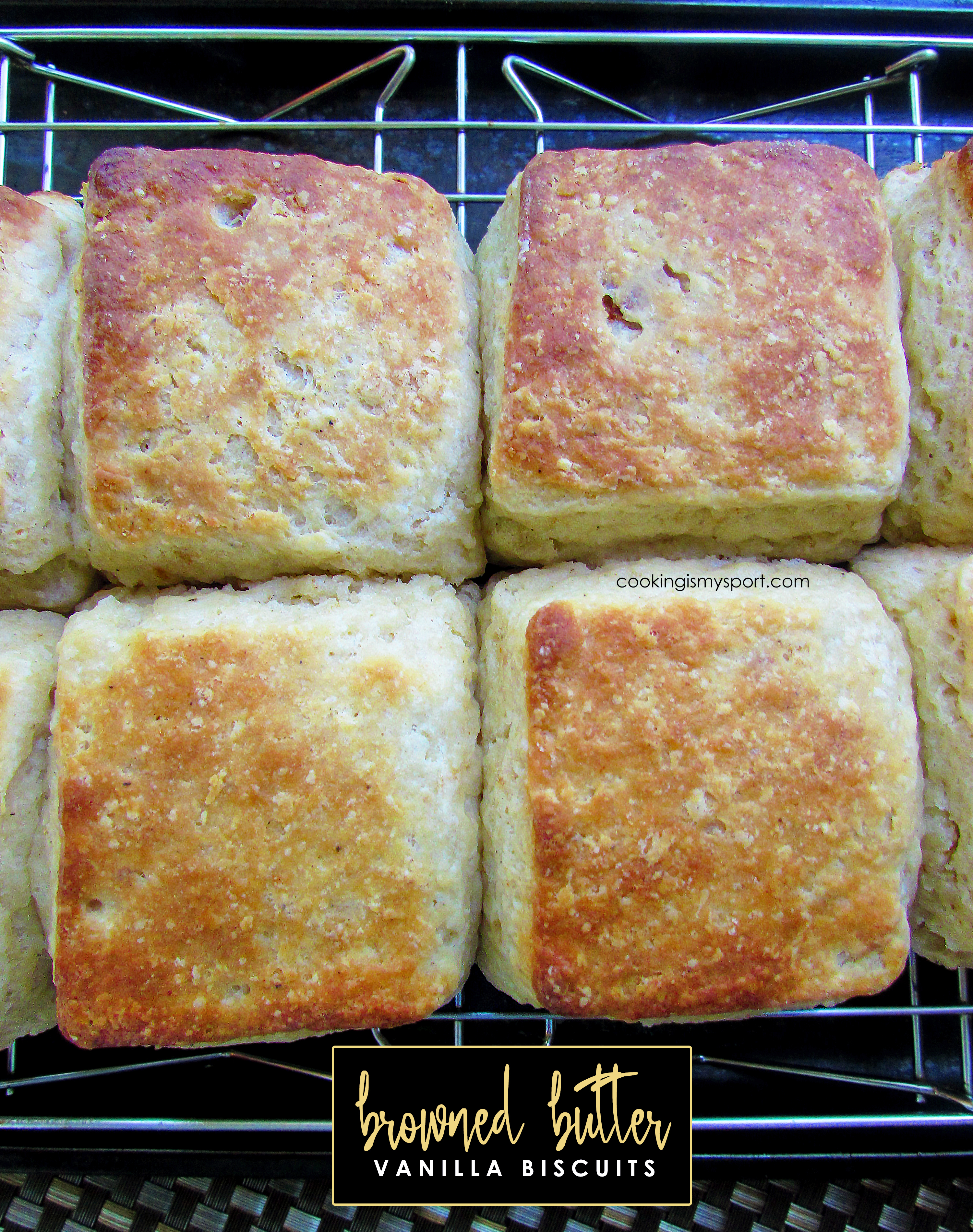 Butter is truly the essence of a good biscuit. The quality of the butter, but more importantly, how you handle it, can literally be the difference between success or failure. I learned that lesson the hard way. I’ve also been pretty transparent on here about my journey with learning how to bake good biscuits and finally reaching a place where I felt confident in my abilities. I have a tried and true method that I know works. I don’t like messing with it. 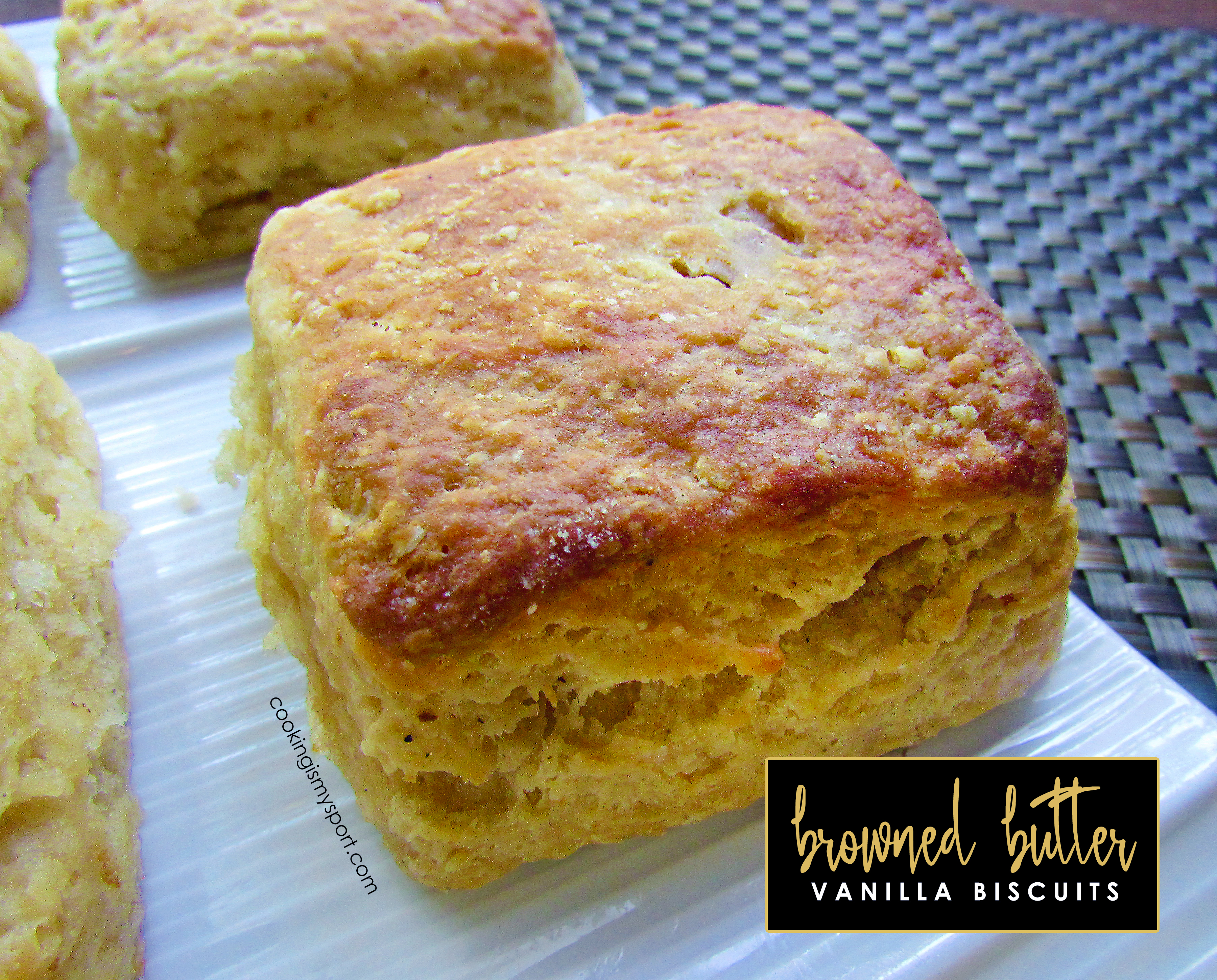 But, because I had seen the wonders that browned butter had done for so many other recipes I’m comfortable with–and how it had actually improved them– I decided to make an exception and depart from my normal routine of biscuit making just enough to swap out regular butter for browned. 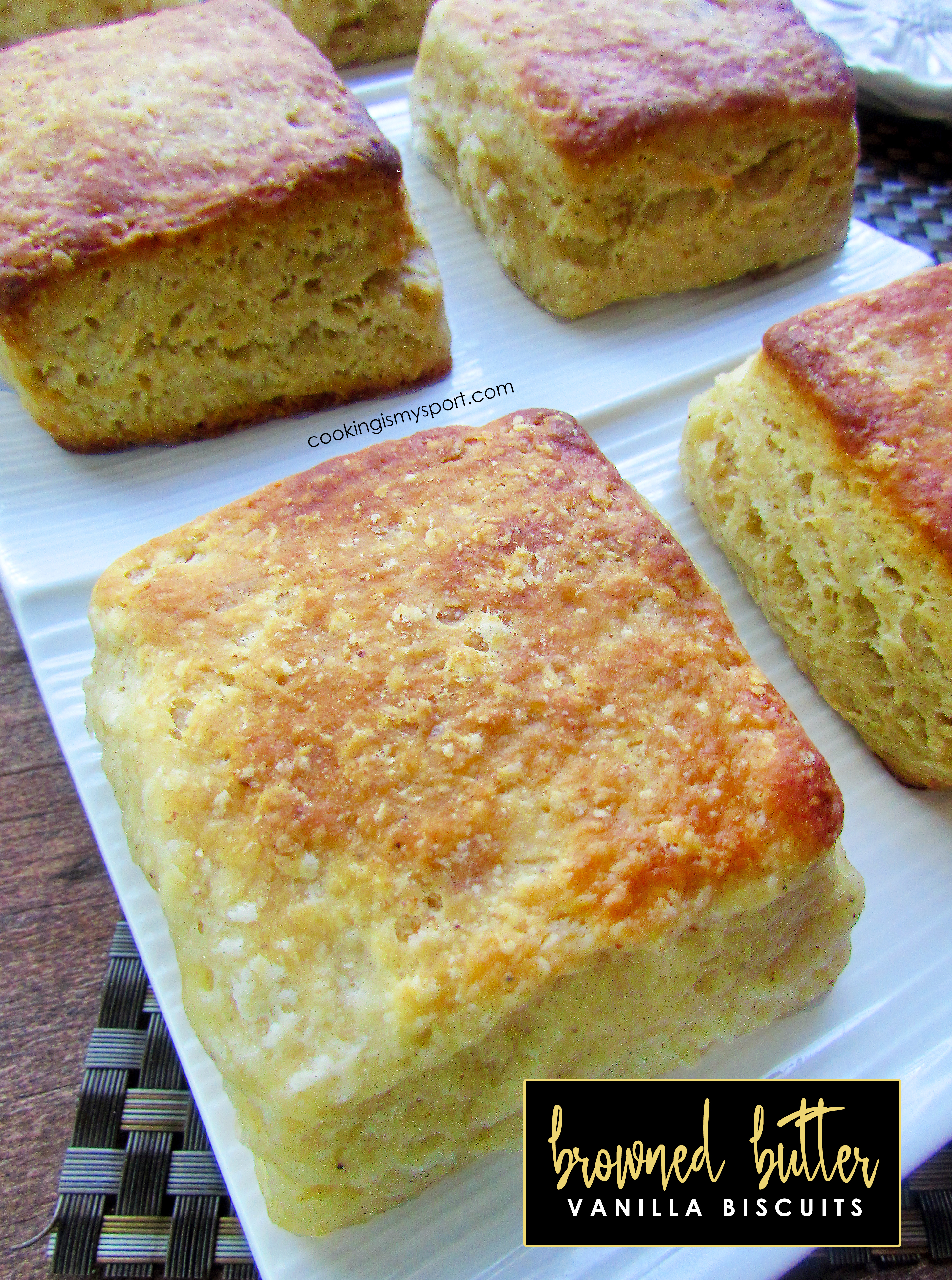 So what did I do differently?

Well, obviously there was an added step of browning the butter before doing anything else. If you’ve seen or used any of my previous biscuit recipes, you’ll know that I insist upon freezing butter for biscuits as well. So that kinda created 2 additional steps: making the browned butter, then placing it in the freezer to give it enough time to completely harden to be cold enough to use in the dough.

The second change I made was to use self rising flour rather than all purpose. This was a change that I had actually been meaning to test out for a while. Self rising flour is flour that already has leavening agents (baking powder and salt) sifted into it. I wanted to see if making the swap would result in a higher biscuit rise. After making those adjustments, I pretty much kept things the same. 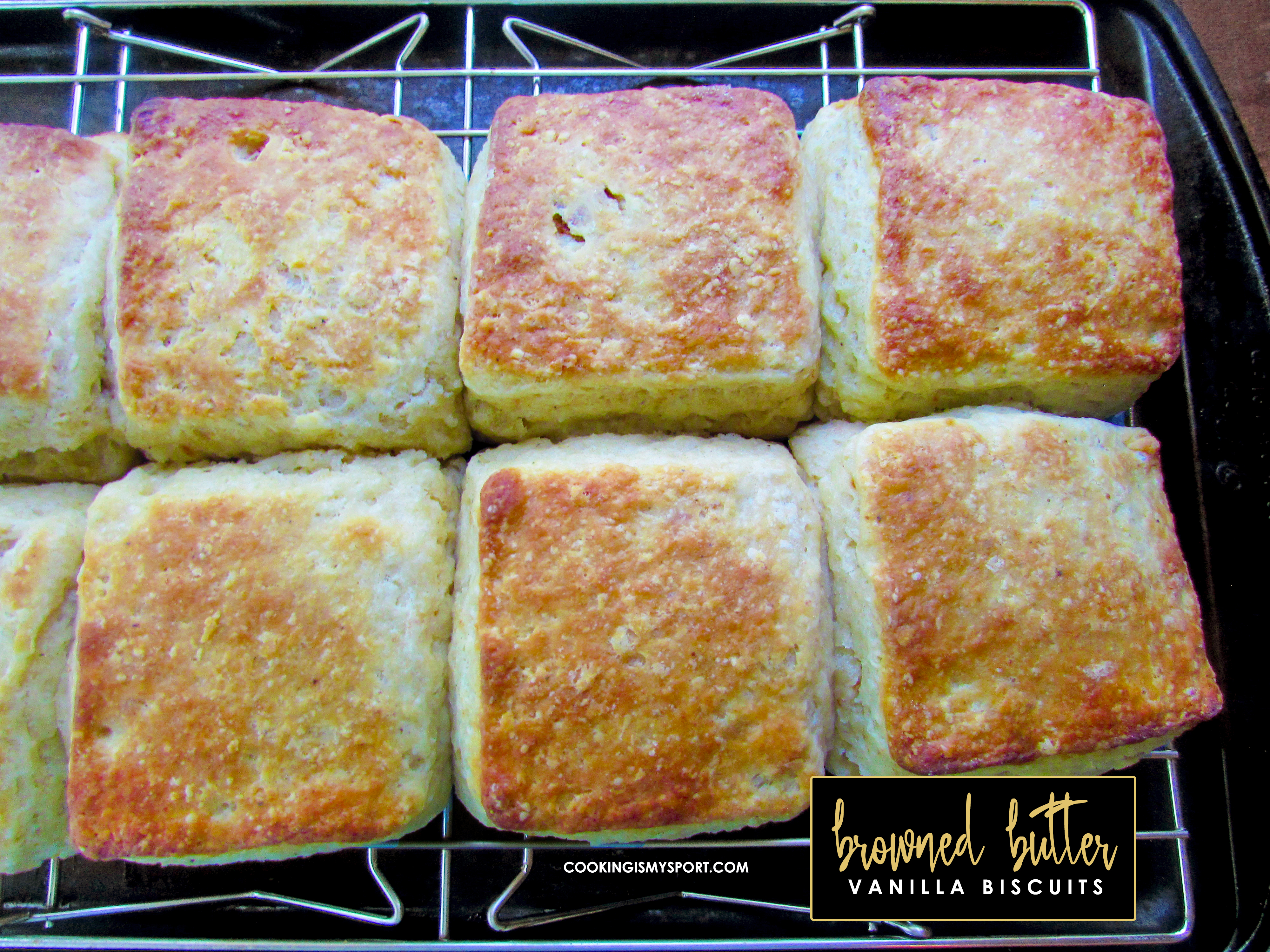 I’m sitting here trying to adequately describe what that first bite was like. I’m really trying, y’all. But honestly, words just don’t do it justice. The depth of flavor that browning the butter gives to the biscuit is unbelievable. They taste like…warmth. Not the temperature. The flavor. Rich, golden, savory warmth. The texture is flakey and soft.

They make me want to dance. I really can’t be much more clear about it than that.

If you don’t bake with browned butter, please change that. Please.

Recipe Adapted from Taste of the South

Melt the butter over medium heat in a 2 quart saucepan. Let it cook and watch it closely until 3-5 minutes until the butter begins to foam, forms a golden brown color and browned bits form on the bottom. (It will have a sweet, nutty smell). Immediately remove it from the heat. Allow to cool for about 10 minutes, then place butter in a small bowl, and freeze until solid, about 2 hours.

In a large bowl combine the flour, baking powder, and brown sugar and stir together with a fork.

Tap the small bowl of butter on the counter to shake it out (it should be in one large block) Use the large holes on a box grater to grate the butter directly into the dry ingredients. Stir with a fork.

Make a well in the center of the dry ingredients and pour in the buttermilk with the vanilla.

Use a large fork and a large rubber spatula to stir the mixture together. If it seems a little dry you may add additional buttermilk until it forms a shaggy dough.

Sprinkle a pastry mat, wooden cutting board or a clean smooth countertop with flour. Turn the dough out onto the surface and pat a few times with your hands until it loosely holds together. (Don’t knead it too much or the warmth in your palms will melt the butter and cause the biscuits to be tough.)

Use a bench scraper or a large sharp knife to divide the dough in half. Roughly shape each half into a square. Stack one of the halves on top of the other and use a rolling pin to roll it together into one mass. Repeat this process two to three more times before patting it into one final rectangle. (This is a process of layering so that the biscuits will bake flaky).

Wrap the dough in plastic wrap and refrigerate for at least 2 hours and up to overnight.

Preheat oven to 425°. Line a baking sheet with parchment paper. Place a shallow pan of water on the bottom rack of the oven.

Sprinkle your work surface with flour and unwrap the biscuit dough out onto it. Use a bench scraper or very sharp knife to trim the edges of the rectangle. Use a square cookie cutter, or a knife to cut the remaining dough into squares, about 2″ each.

Remove the cut biscuits to the baking sheet you’ve lined with parchment paper, placing them rather close to each other (it will help them rise higher). Freeze until cold, about 15 minutes.

Sharing at Fiesta Friday #280, cohosted this week by Ai @ Ai Made It For You and Angie@FiestaFriday.