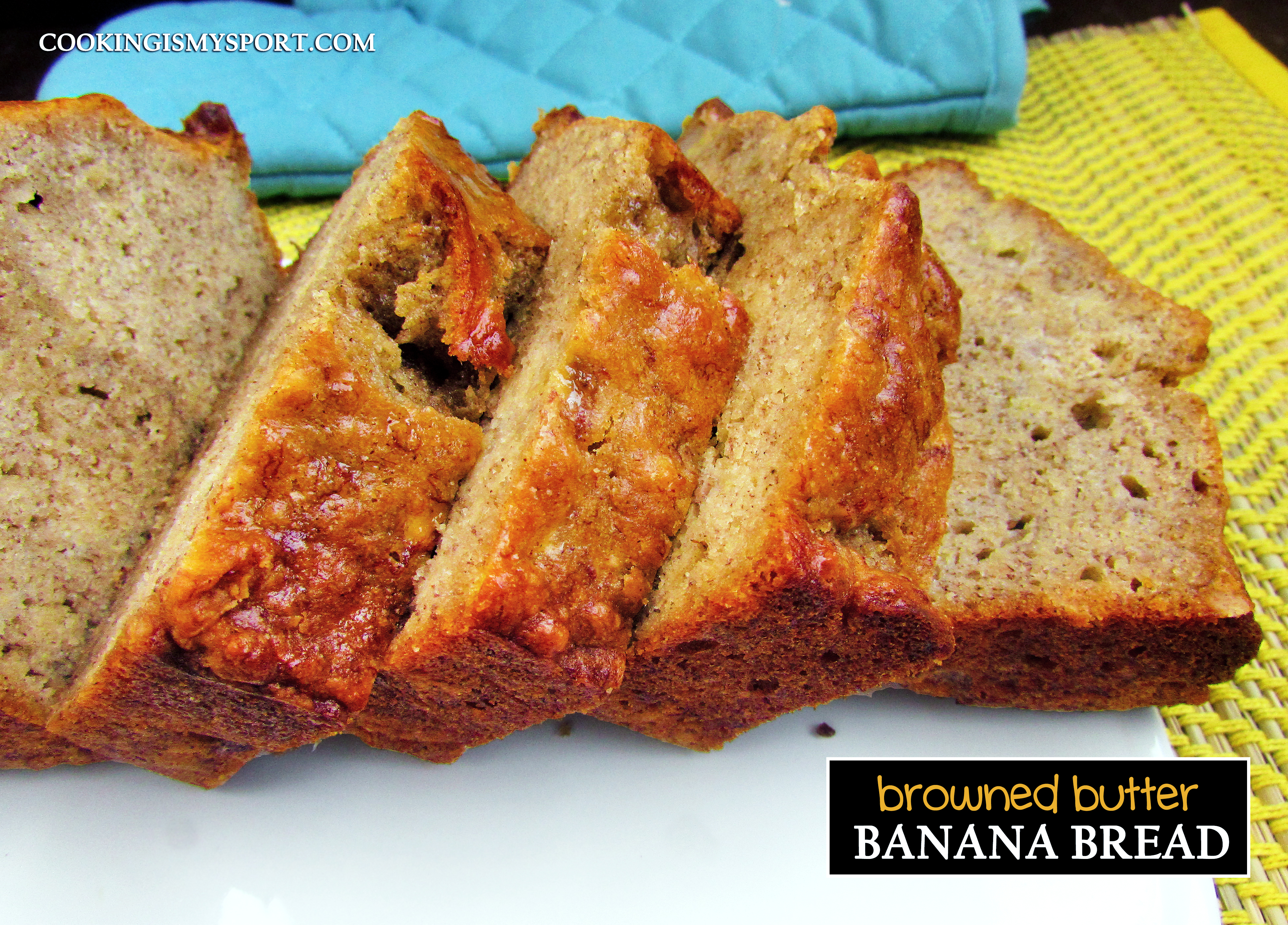 Hey y’all. Sorry about the hiatus. You know how things go; sometimes you can get it together enough to crank out a post, other times it just doesn’t happen.

But I made it happen today, in more ways than one.

A little over a month ago, I used browned butter for the first time in a recipe for chocolate chip cookies. It was a huge success. I knew right away that I would definitely be finding a way to incorporate browned butter into my baking repertoire for other classic recipes.

And now, I’m glad to say that I’ve found another great way to do just that. 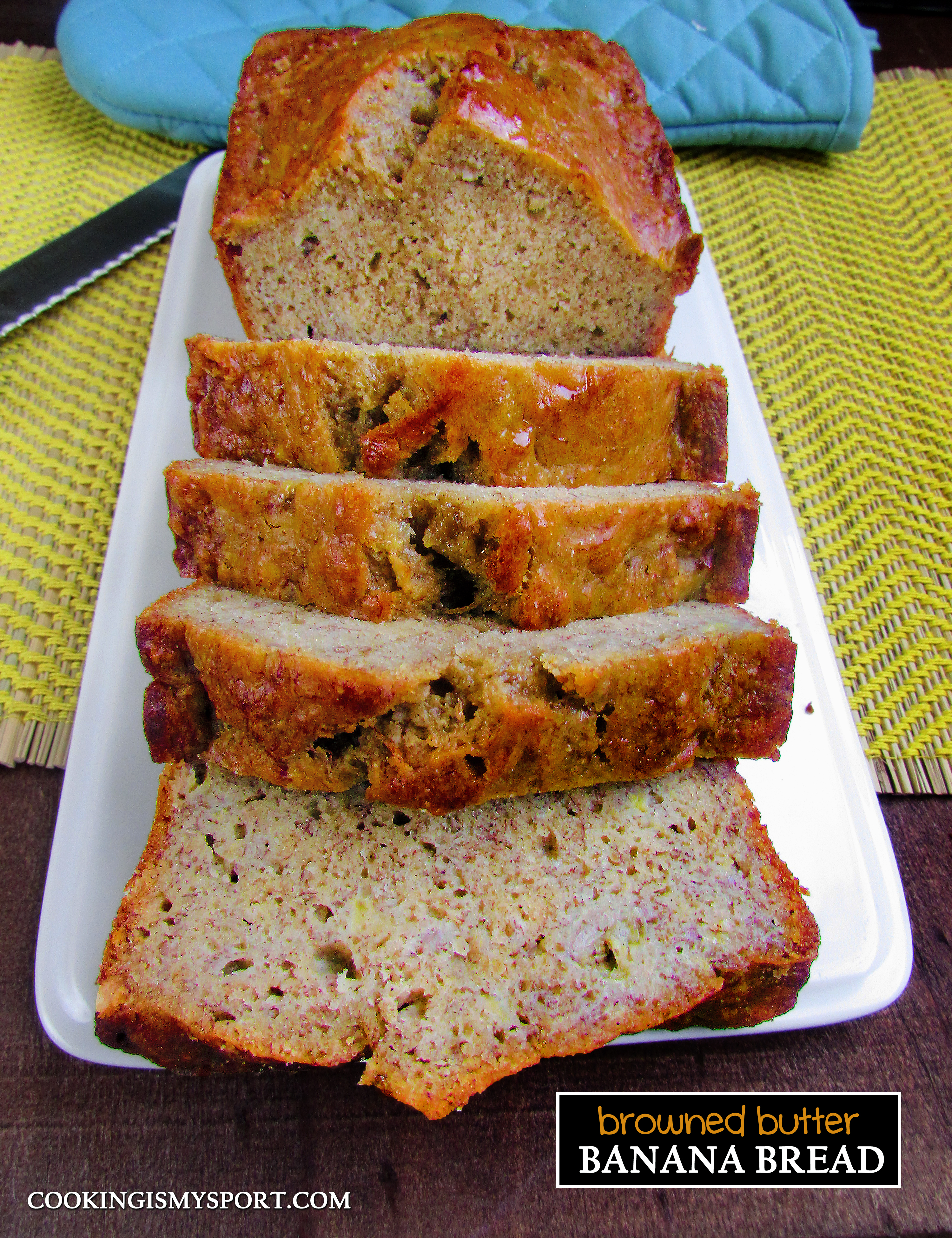 I don’t know anybody that doesn’t like banana bread.

I don’t know if I want to know anybody that doesn’t like banana bread. It’s just one of those things that we can all probably agree upon and bond over.

Besides that, I think we all can relate to our trying to be health-conscious and whatnot, buying a huge bunch of bananas, then letting them sit on the counter for days on end, just chilling until one day we look up and bam: they’re too spotty and soft to be able to eat anymore and we feel the guilt for not eating them raw when we had the chance. 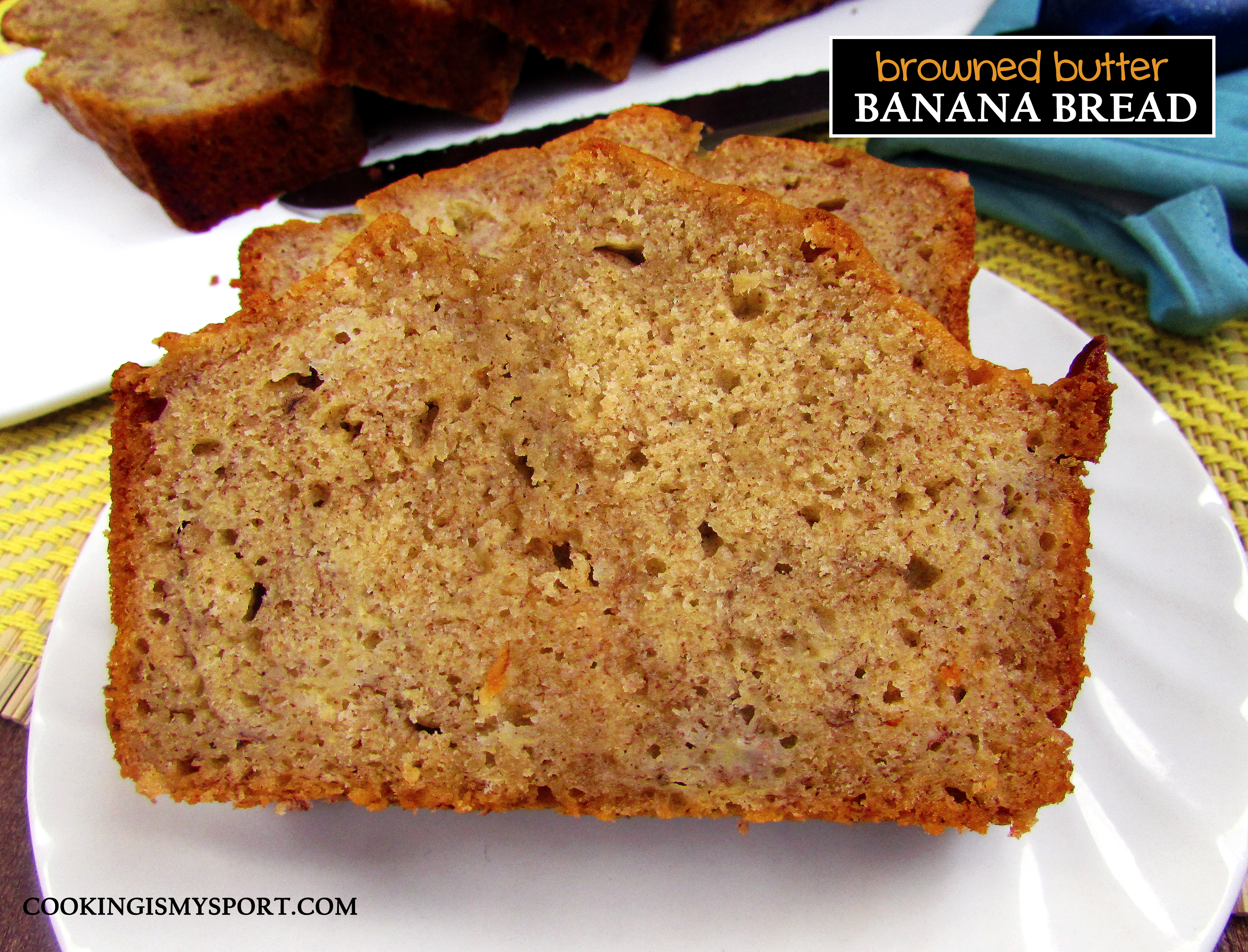 Don’t feel bad. We’re all guilty of it.

But as we all know, overly ripe bananas can become a blessing in disguise because of what they can be transformed into. The easiest and probably most popular of these, is the almighty banana bread.

I’m not gonna lie guys. There really aren’t many tricks or frills to this recipe. It’s quick and stupid-easy to put together, and although I briefly considered doing something different to jazz it up, like adding a pecan streusel or drizzling an icing on top or something, ultimately I decided against it and decided to just let things be and keep it simple. 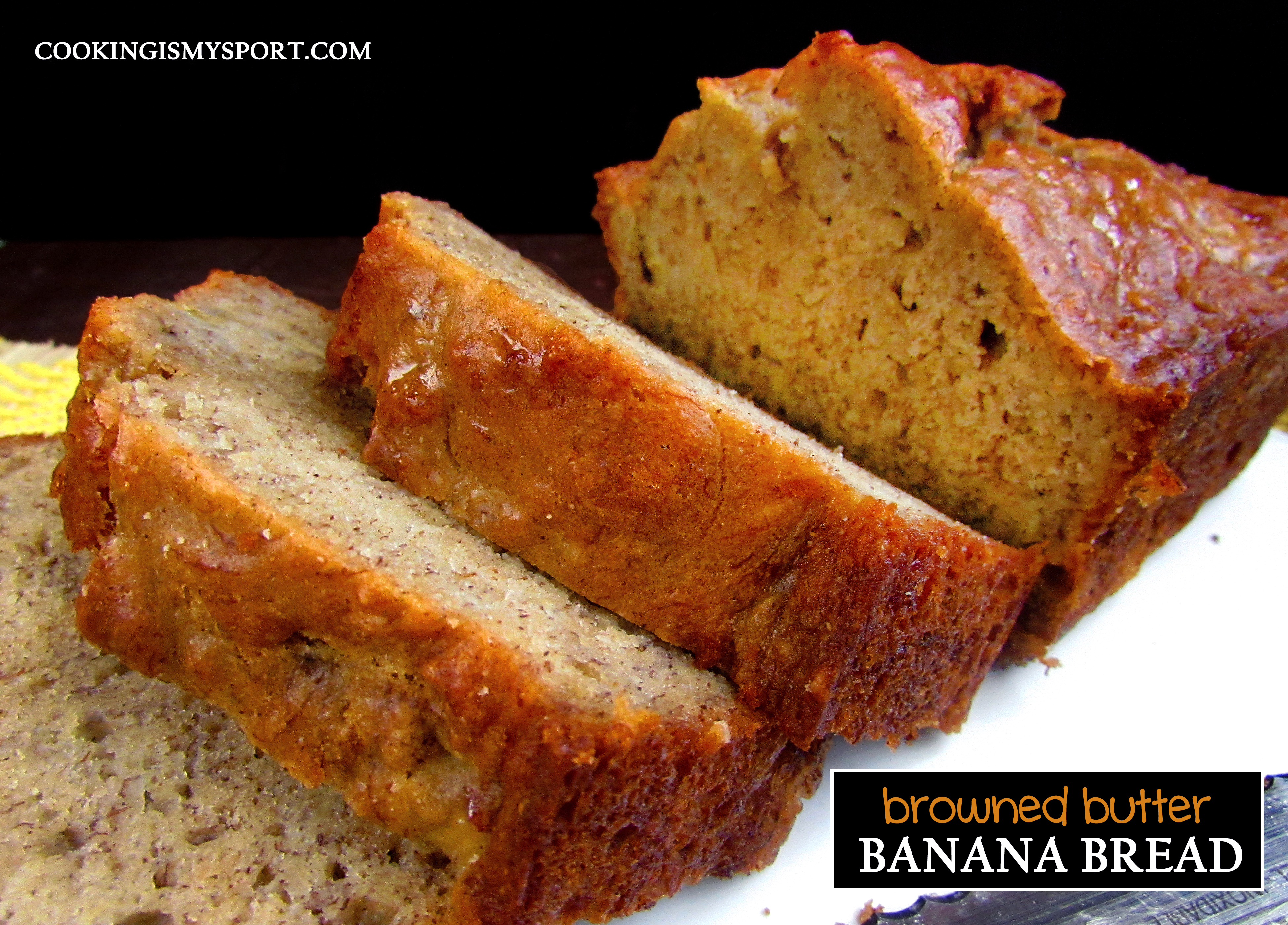 I actually ended up very pleased I didn’t add anything else to it, because what really makes this recipe shine is the inclusion of the browned butter. It’s what takes this from being an ordinary loaf of banana bread and elevates it to something really special. Like I described in my chocolate chip cookies post where I first used it, browned butter has a very rich, nutty and toasted smell/flavor. My best way of trying to describe it is that it takes standard flavors in a sweet dish, and deepens them. There’s a noticeable toasted, caramelized taste to them that once you’ve tried, you just can’t get enough of.

I thought that I loved chocolate chip cookies before, but trust me: I love them even more when they’re made with browned butter. Same thing here. 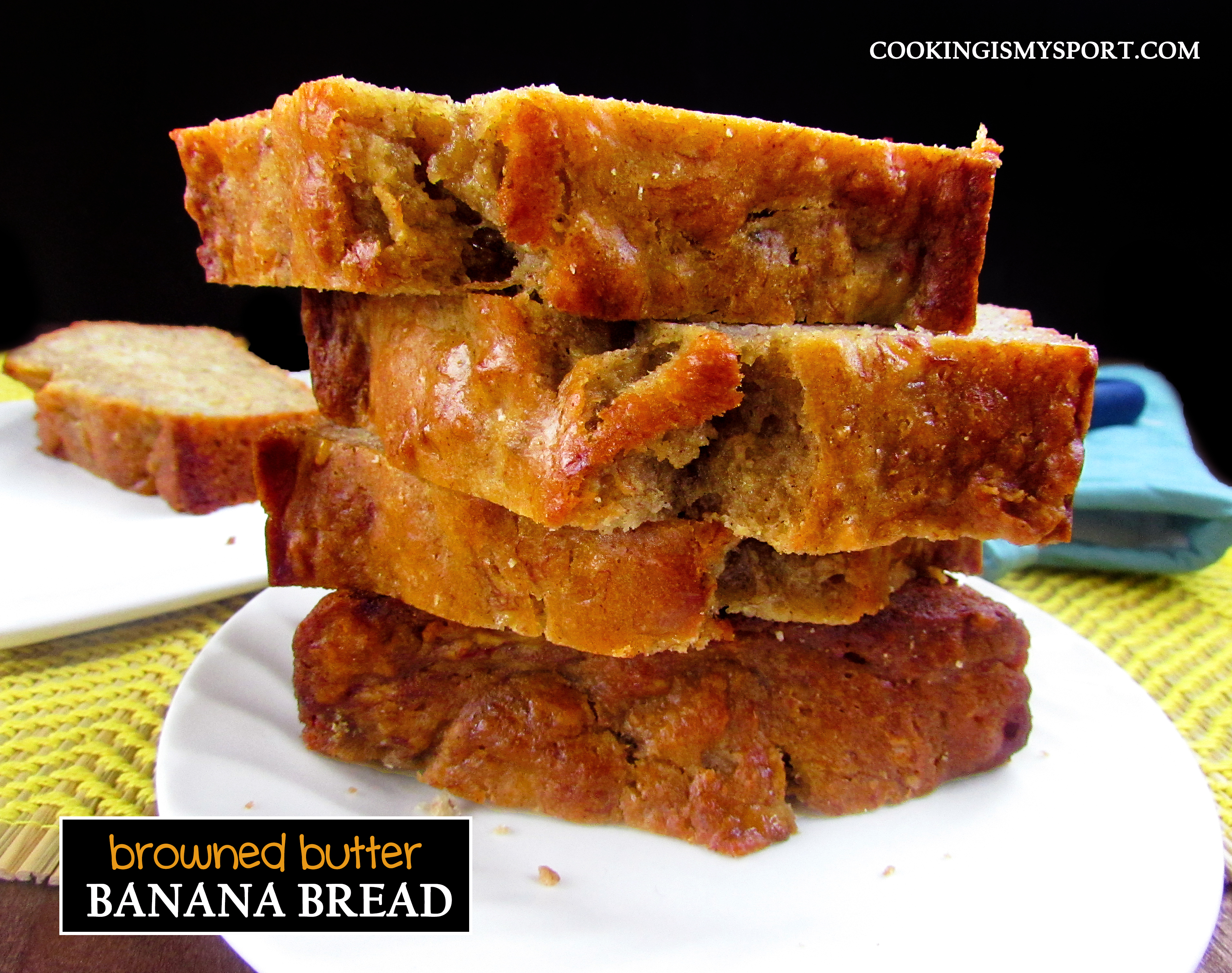 The ingredients for banana bread are usually ones that most people already have in their fridges/pantries already, so that means most of you have no excuse not to go ahead and do yourselves a favor by making this loaf, stat.

The smells it’s going to create when you make the browned butter AND bake the loaf alone were made for autumn. When it’s finished, don’t skip the step of taking the extra browned butter and brushing it over the hot loaf. It’s going to seep into the crevices of the  crumbs and when it dries, well…all will be revealed and suddenly made clear to you.

Slice the bread up thick. Put it in the toaster for a few minutes. Pop it out. Slather one side in butter. Cinnamon honey butter if you’re really feeling adventurous.

Bringing this loaf to this week’s Fiesta Friday #140, co-hosted this week by  Julie @ Hostess at Heart and Linda @ Fabulous Fare Sisters.

Preheat the oven to 350 degrees F and either butter or spray a 9- by 5-inch loaf pan with cooking spray.

Melt and heat the butter over medium-low heat in a small saucepan. You want the milk solids to turn a deep golden brown color. It will have a nutty and toasted smell and there should be small golden brown bits in the surface. It’ll take about 15 to 20 minutes.

Stir the brown butter so that any of the golden brown bits that may have fallen to the bottom are distributed equally throughout the butter. Reserve 4 tablespoons of the brown butter for later on.

Whisk together the remaining brown butter, brown sugar, eggs and vanilla in a medium bowl, then fold in the mashed bananas with a rubber spatula or a fork.
Fold the banana mixture into the flour mixture until just combined (the batter doesn’t have to be completely smooth, a few lumps are fine).

Transfer the batter to the prepared loaf pan, and bake until the bread is golden brown and a toothpick inserted in the center comes out clean, 1 hour to 1 hour 10 minutes. Take the reserved browned butter (reheat in the microwave to re-melt if you have to) and using a pastry brush, brush the butter over the hot bread, letting it seep into it.

Run a knife around the edges, and let cool completely in the pan on a rack.