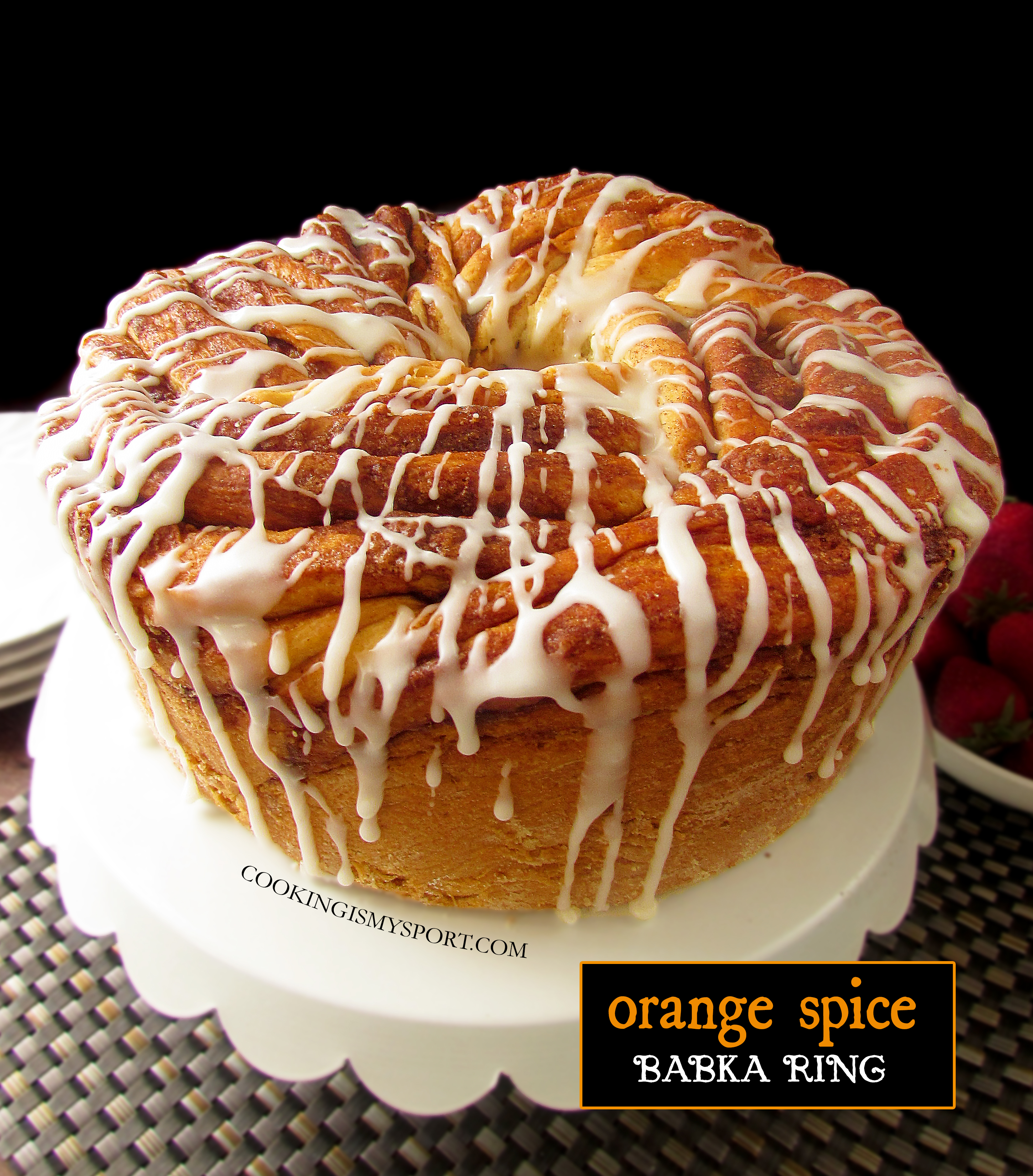 It’s been quite a week.

First, our A/C had a malfunction. Broken air conditioning + tiny apartment + upper floor = stuffy, hot misery. Plus, turning on the oven to cook or bake anything just wasn’t an option. Which, wasn’t fun.

Fortunately after 3 days, it was fixed and now things can get back to normal. 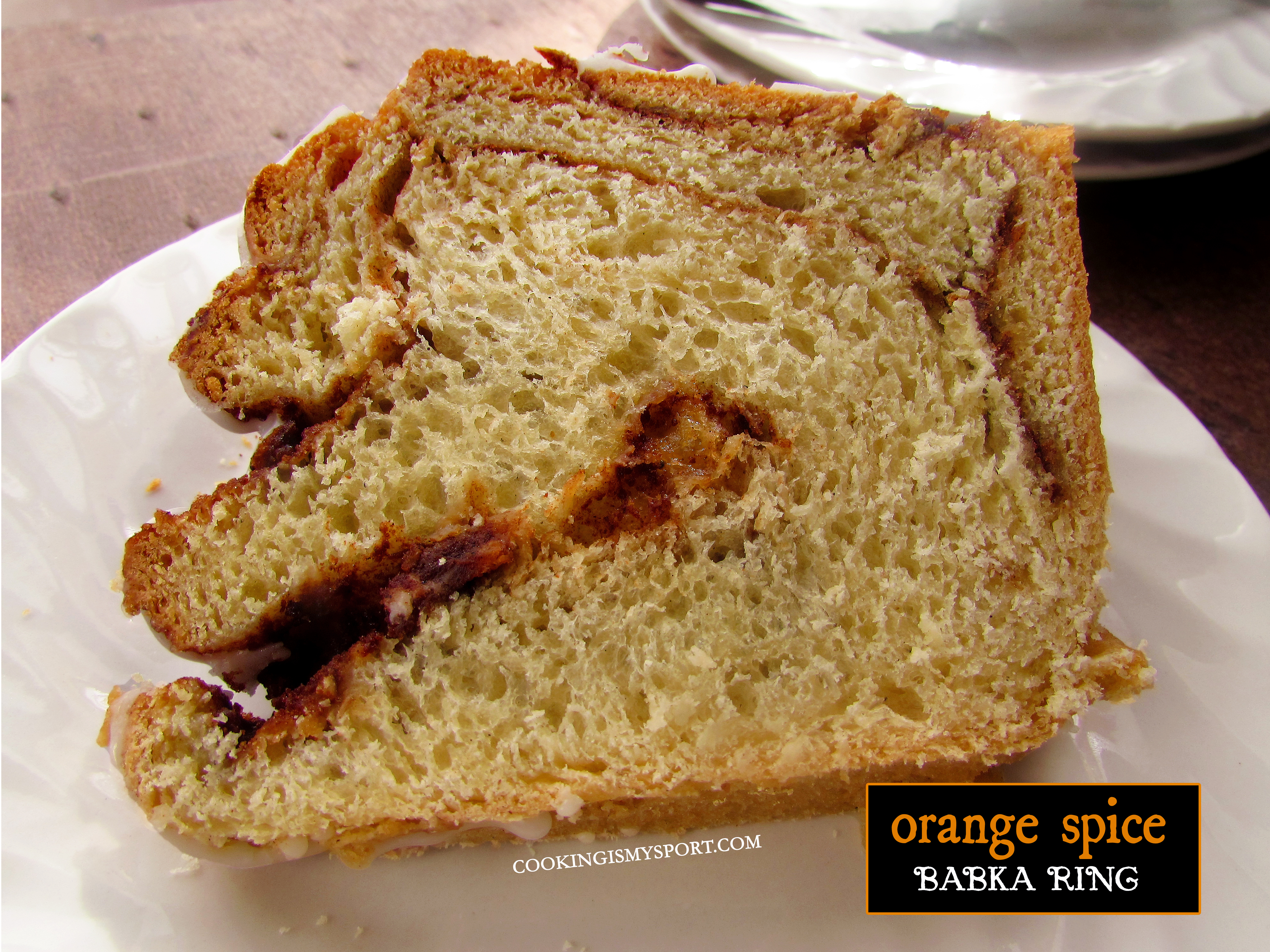 There’s a story behind today’s recipe. Ready to hear it?

I really needed to wash/condition my hair, but I also really wanted to bake. So I decided to do both. I made the dough, then left it for it’s first rise. I went away to wash/condition my hair. I came back, shaped it, then left it for it’s second rise. I rinsed the conditioner out of my hair. I came back and put the bread in the oven to bake. I blow-dried my hair. The bread finished baking.

And that’s it. That’s the whole story. I was multi-tasking. Pretty exciting, huh? 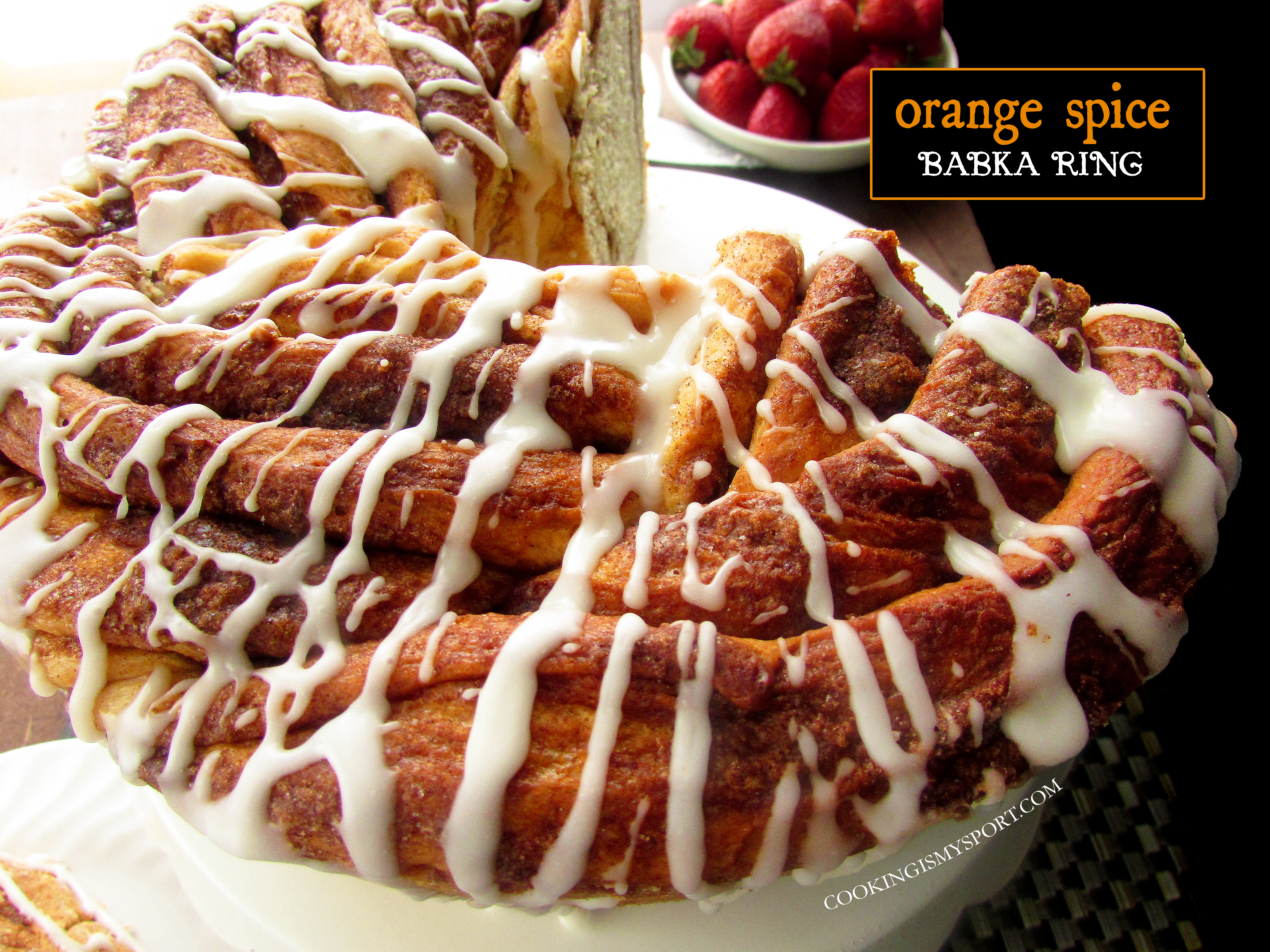 The ‘how’ may not be too enthralling, but I promise you everything else about this babka certainly is.

Babka’s made an appearance before on this blog a few years ago during the 12 Days of Christmas with this Sticky Caramel Pecan Babka Loaf. The word ‘Babka’ itself derives from Bábovka, a yeast based cake from Eastern Europe that manifests in German, Jewish and Polish baking. The dough is usually very enriched, buttery, eggy and spiced. There are countless variations out there and this time I decided to put a little different spin on it from the one I did before. 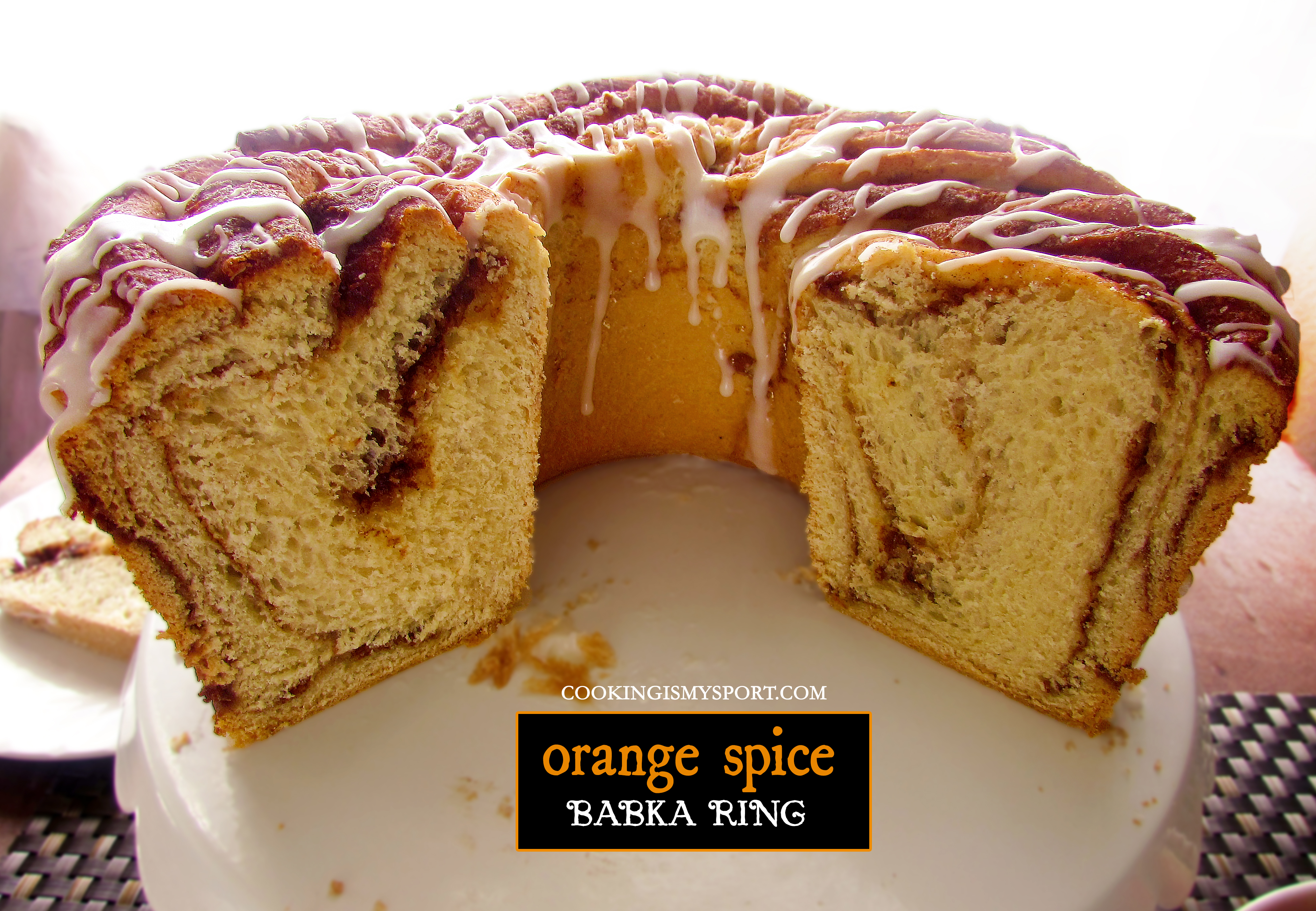 The last babka was flavored with cinnamon brown sugar and pecans. This one’s filling has a bit more: there’s brown sugar, cinnamon, cardamom and ginger inside, along with some orange zest. If you’re fond of them, I did include an option to include golden raisins and walnuts to that mixture (I left them out of this loaf, but please do include them in yours in you’re a fan). As you can see, the filling forms a lovely ribbon on the inside once it’s baked, which brings me to the next step. 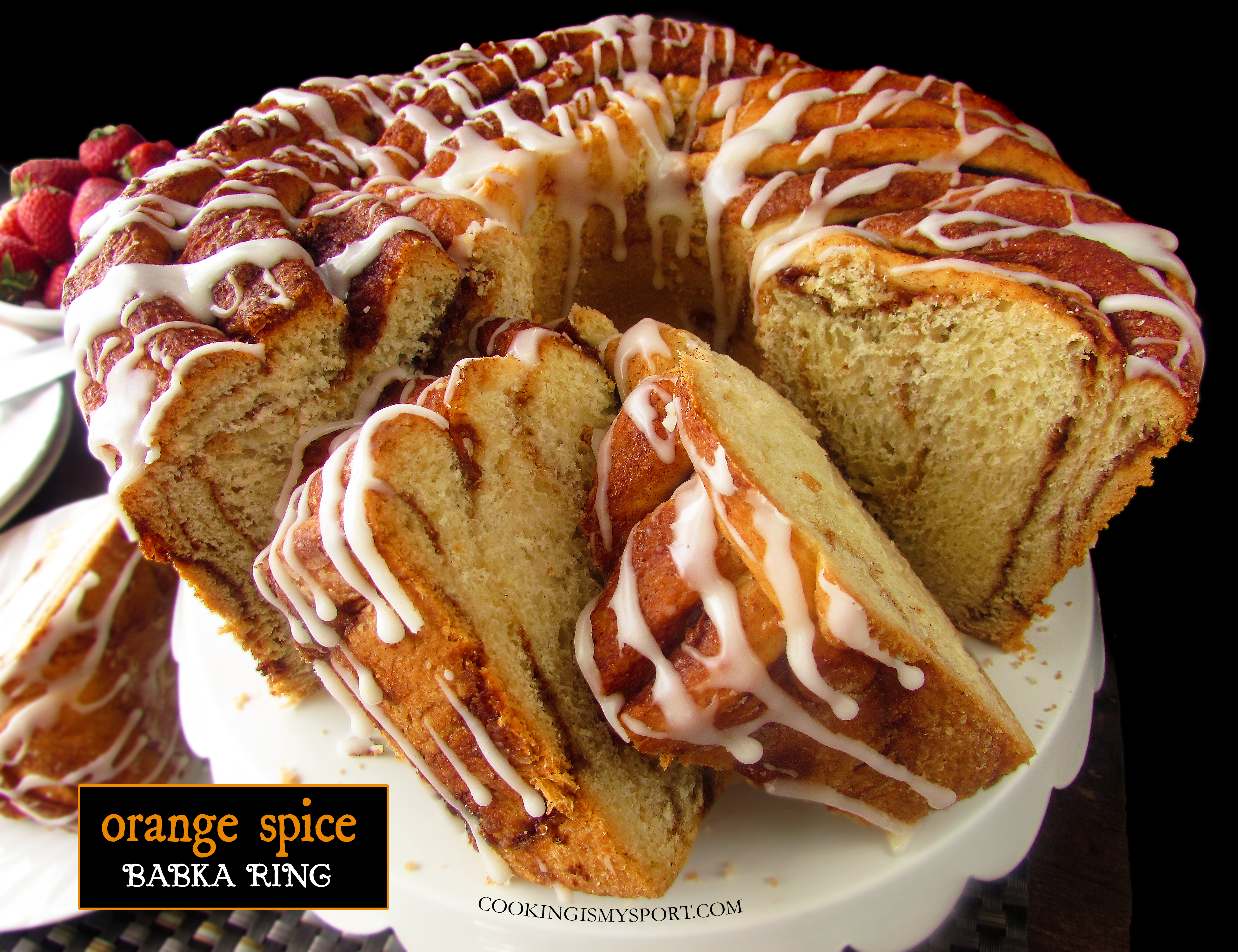 The method starts out the same as before: the babka dough is rolled out into a large rectangle after the first rise, the filling is sprinkled on top, then the whole thing gets rolled tightly into a thick cylinder. Then, you take a pair of kitchen shears or a very sharp knife and cut down the middle of the cylinder to create two halves. Those two halves get braided together.

Now, whereas before I arranged the braid straight into a loaf pan, this time I laid the braid into my tube pan and smushed the two ends together to form a ring. After you let the ring rise and bake it off, you get…this. 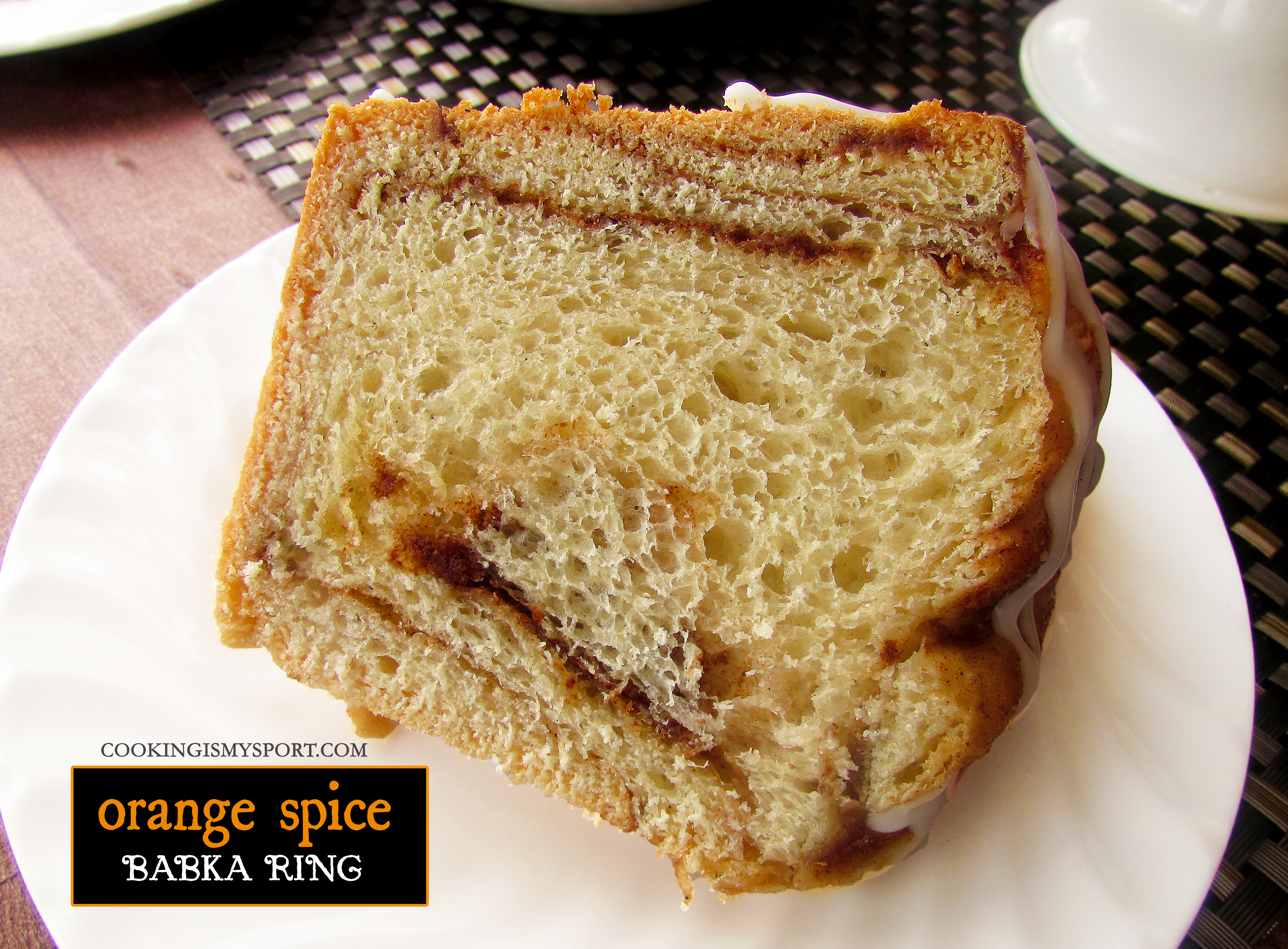 It’s perfectly fine on its own, but if you’re feeling naughty you can go ahead and add the orange flavored icing on top that literally takes under 5 minutes to throw together and drizzle on top.

I’m telling y’all: the extra effort that comes with baking babka is SO WORTH IT. You won’t regret a single step. I never do–not even when I’m multi-tasking with other things to do around the house. And you certainly won’t regret one single bite of this rich, spiced bread that smells and tastes like pure Heaven.

Sharing at this week’s Fiesta Friday #234, co-hosted this week by Jenny @ Apply To Face Blog and Deb @ Pantry Portfolio.

In a large bowl of a standing mixer, sprinkle yeast over warm water. Sprinkle 1 tablespoon of the white sugar on top of that. Allow to sit for 10 minutes until proofed and frothy.

Add the remaining sugar, melted butter,  eggs and vanilla extract to the bowl and use the paddle attachment to mix well until combined.

Switch to the dough hook and add the flour one cup at a time, beating after each addition, graduating switching to kneading with hands as dough thickens. (You may not need to use all 4 cups, this varies according to location & time of year). Continue to mix until the dough holds together and pulls away from the sides of the bowl; the dough should still be very soft.

Sprinkle a work surface with flour. Turn the dough out onto it and use your hands to knead until smooth and elastic and no longer sticky, adding flour as needed.  Grease the standing mixer bowl with the vegetable oil, place dough back inside and cover with plastic wrap and a damp clean cloth. Let rise for 1 1/2 hours or until dough has doubled in bulk.

Grease and flour a 16 cup tube pan. Combine the brown sugar, cinnamon, ginger, cardamom, orange zest together in a bowl. Sprinkle the work surface with a bit more flour and roll the dough into a large rectangle, about 10 by 18-inches. Brush it down with the melted butter, then sprinkle the sugar mixture on top. (You can use a spatula to help you spread it into a even paste if you like). If you’re using the raisins and nuts, sprinkle those on top of the sugar mixture.

Starting from the short end, roll the rectangle up tightly into a log. Pinch the dough ends firmly into the log to seal. Either use a very sharp knife you’ve dipped in water, or a pair of kitchen shears to gently, but swiftly, slice the log down its entire length, creating two halves with lots of layers. Turn the halves so that the layers are facing up. Press the two halves together at the top, then twist the halves around each other, creating a spiral braid. Press the halves together again at the bottom. Gently lift the braid into the tube pan, arranging into a ring with the layers facing up, and tucking one end of the braid under the other. Cover with plastic wrap & a damp cloth and allow to rise for another 50-60 minutes until doubled in size.

Preheat oven to 325 degrees Fahrenheit.  Bake on the middle rack for 45 minutes to 1 hour until your babka is golden brown (covering with foil if browning too quickly if need be). Cool in the pan for about 20 minutes, then turn out and transfer to a wire rack to cool completely.

For Glaze: Mix the sugar and OJ together in a bowl, until the sugar dissolves. Whisk the glaze to smooth out any lumps; drizzle it over the top of the babka and allow to set until hardened.