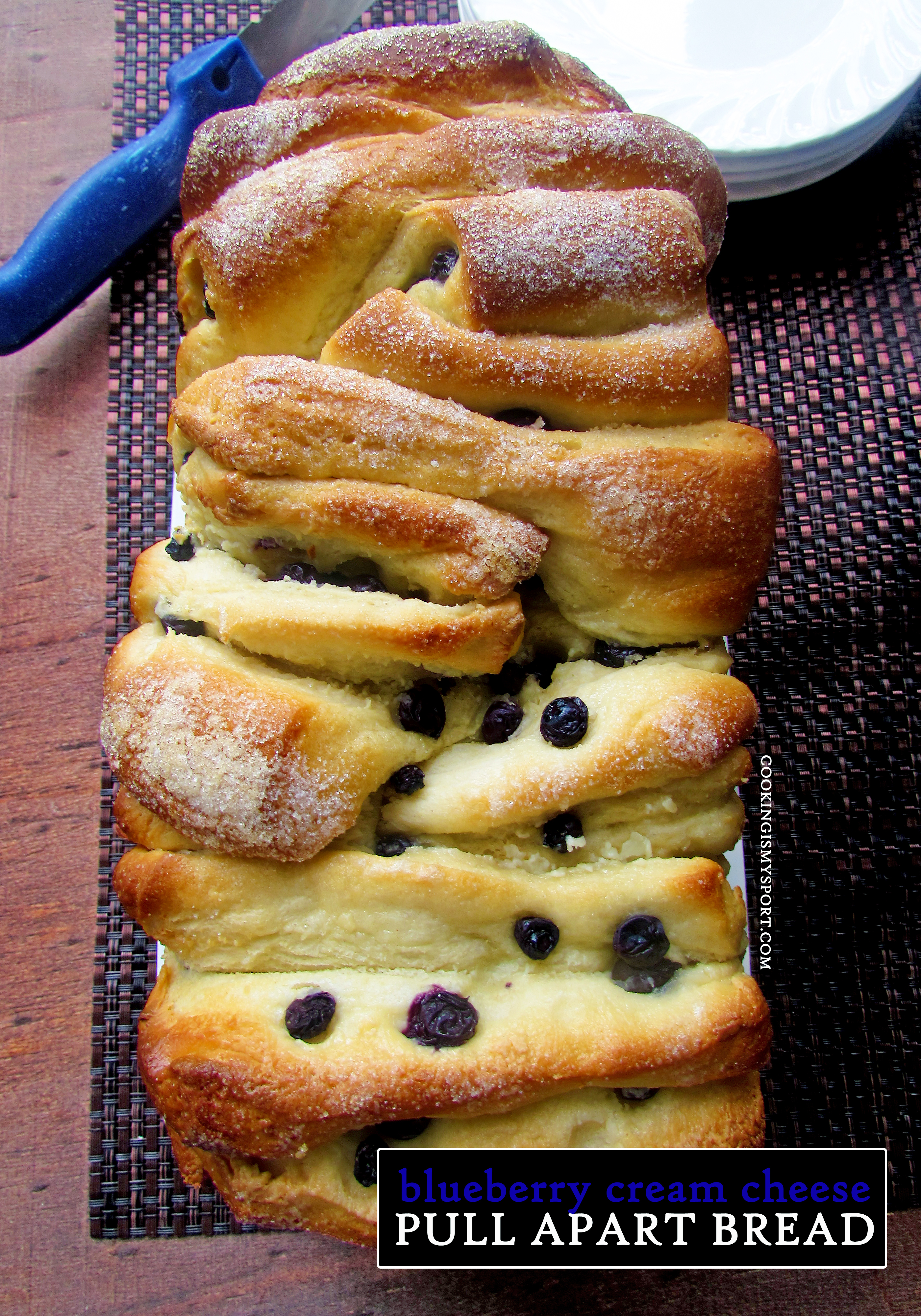 Sometimes, I’ll mess something up in the kitchen. Happens to the best of us. But inevitably each time that I do, after I’ve tossed out the evidence and cleaned up the kitchen and sat down and given myself time to stew/pout/feel sorry for myself, I get this irrepressible urge to get back into the kitchen and make something else–y’know, just to ‘prove’ that the bad dish was just a fluke and that I do in fact have cooking/baking chops.

I know there are at least a few of y’all who can relate to that. It’s okay to admit it. This is a safe space. 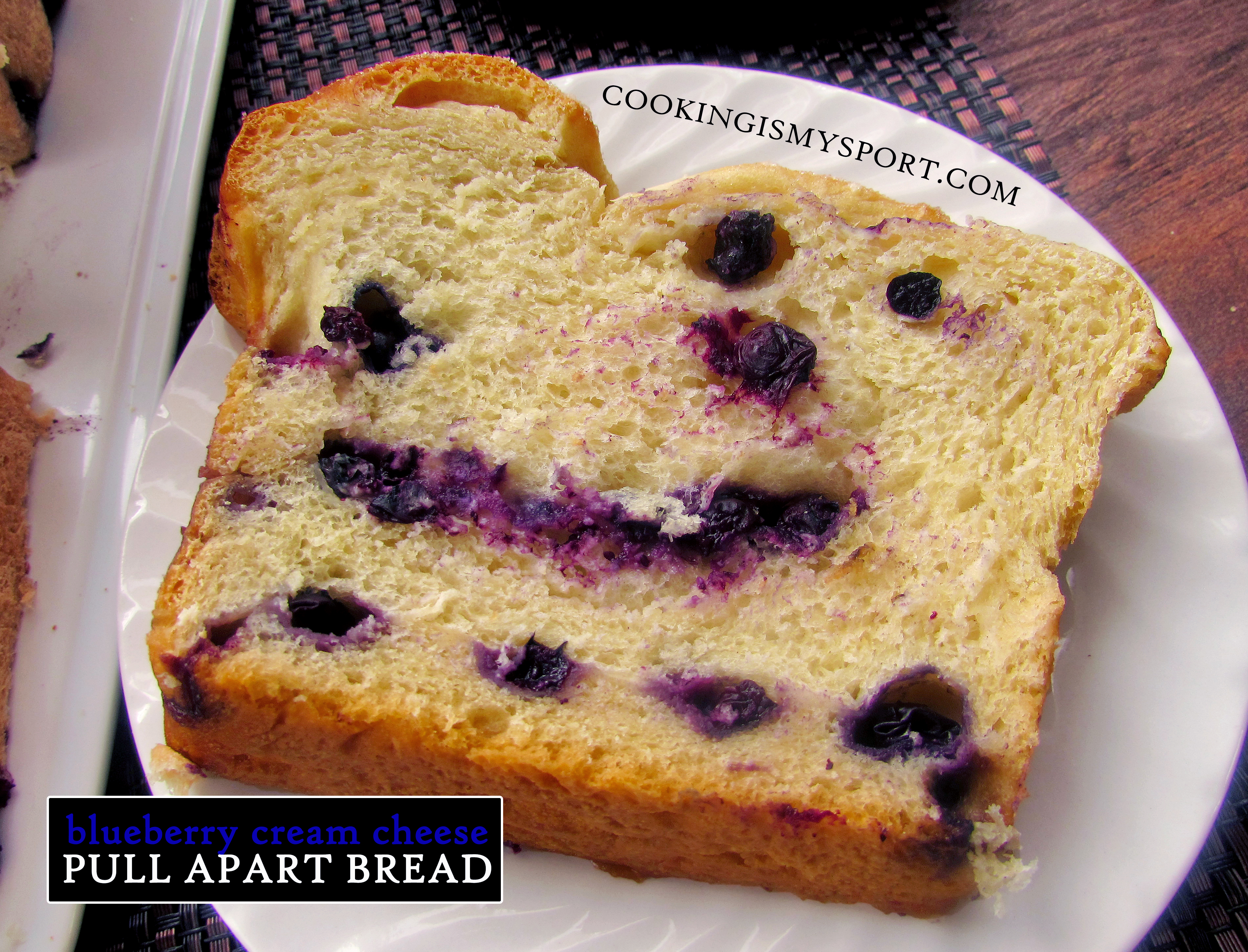 Although there are days where things go left, I also have days in the kitchen that turn out the complete opposite, where I make something that is SO GOOD I want to cook and bake again just to replicate all of the deliciousness all over again. That’s kinda why this post is happening today. Something not only went well, it went so fantastic that I just had to have another go at it. That ‘something’ was last week’s recipe of this Chocolate-Cinnamon Pull Apart Bread. That stuff was legit, one of the best loaves of bread I’ve ever made in my life.

Clearly by the post stats, y’all thought it was pretty good too, so thanks for the love. 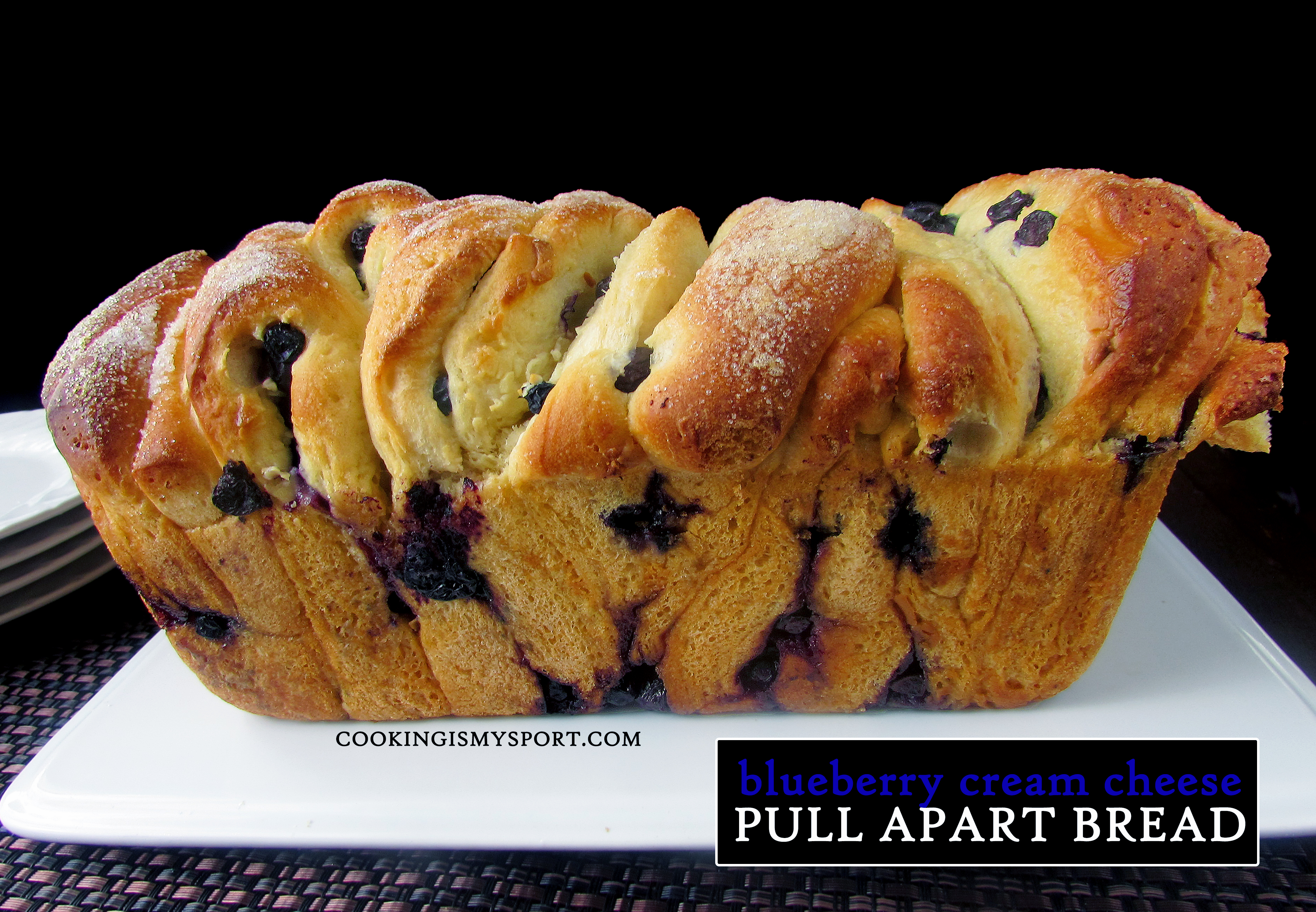 So, what are we doing here again you might ask? Well, first of all, I just really enjoyed the method of putting it together. Second, maybe chocolate and cinnamon aren’t to your liking (poor unfortunate soul that you are) and you need something a little bit different–here it is. Third, the method is easy and flexible enough to where any number of flavor combinations and ingredients could go into a pull apart loaf. This is just my second attempt at the method to see if this combination was a good one.

Spoiler alert: it is. 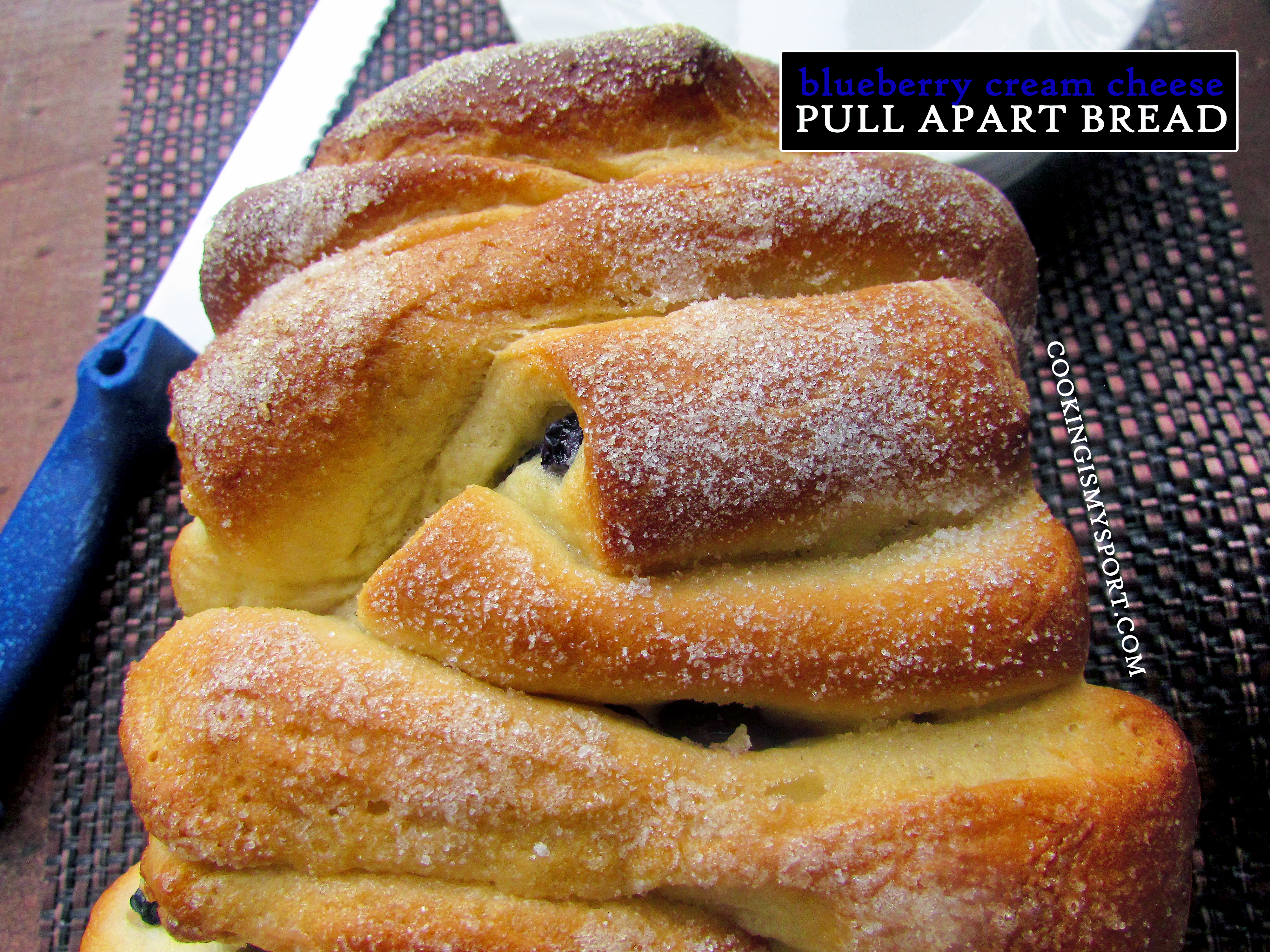 Just as I did before, I’m using my go-to Challah recipe for this, as it’s easy to put together with minimal ingredients, and also sturdy enough to stand up to the layering of the dough in the pan later. If you have another recipe for Challah or an enriched bread to use, that’s fine–you COULD also use frozen pre-made bread dough that you thaw for a real shortcut. Just make sure it’s a brand you trust and that you’ve got enough to fill two loaf pans. 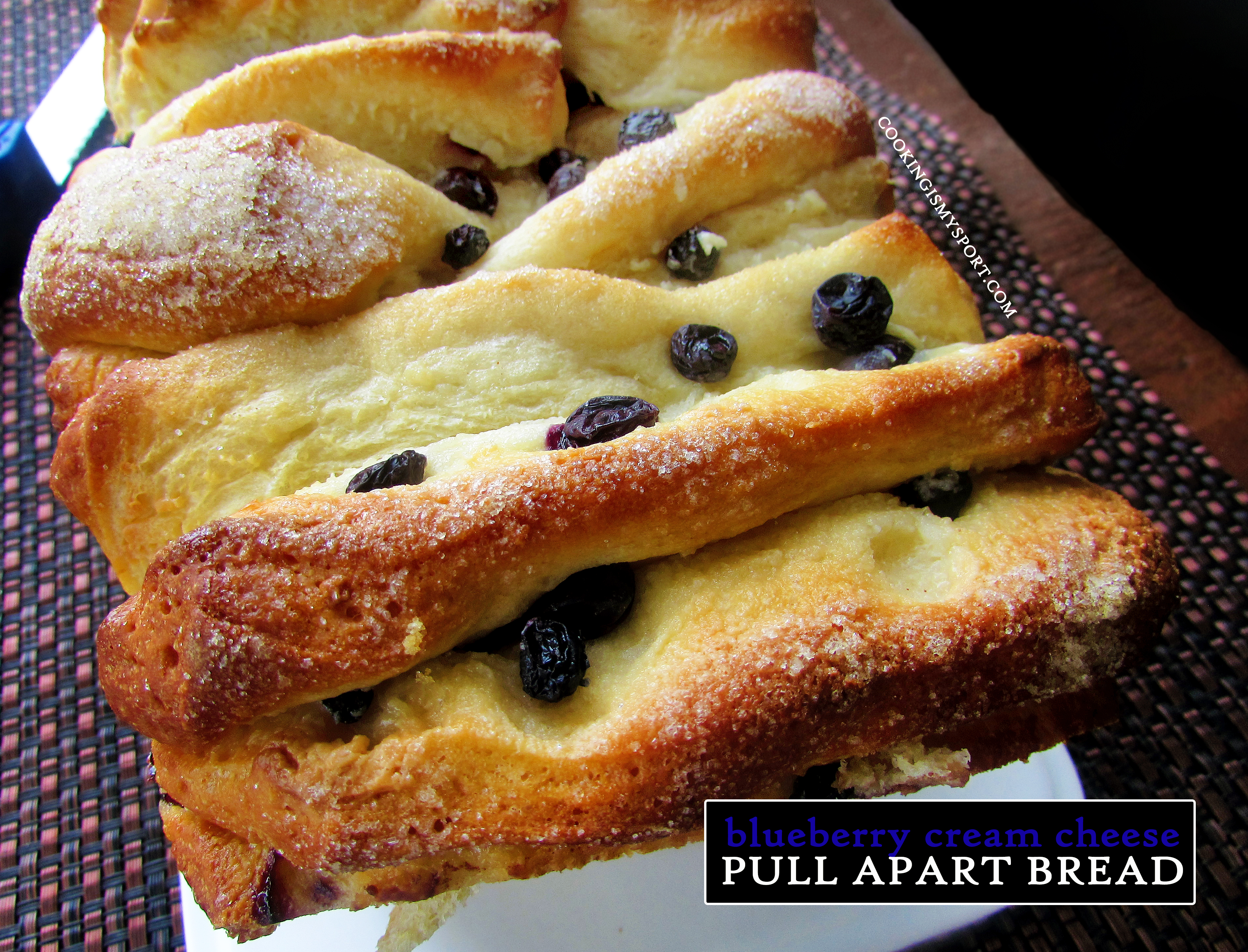 Whereas the loaves from last week were spread with softened butter, chocolate and cinnamon, these loaves are spread with a combination of cream cheese, lemon zest, blueberries and white sugar. Just like before, the dough is cut into squares that are stacked together, than layered into a loaf pan. They don’t have to be perfectly arranged. The more imperfect that they are, the more they’ll make pieces good for ‘pulling’ the bread apart into portions. 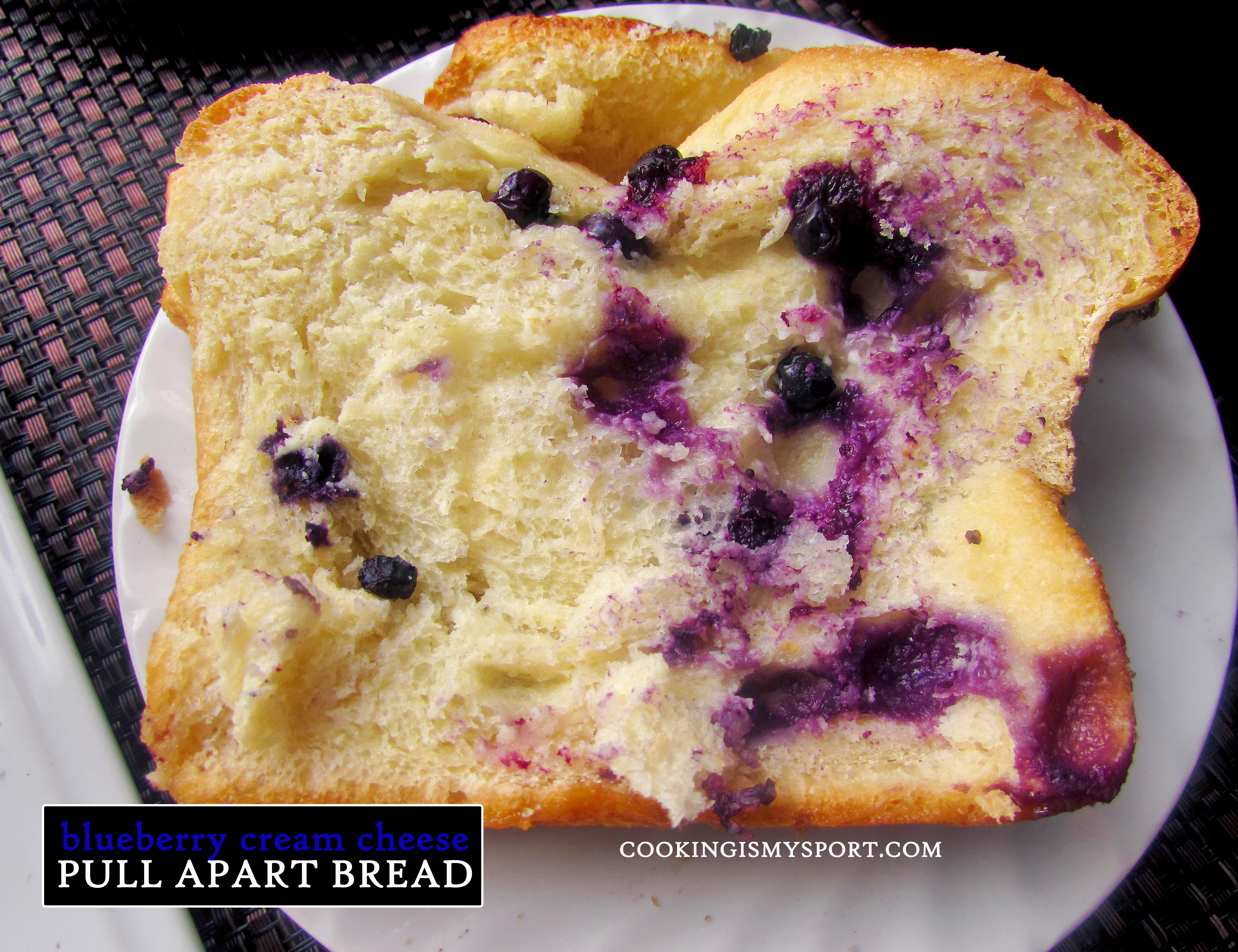 Like the butter from last week, the cream cheese isn’t here to give the bread a ‘gooey-ness’ on the inside–it’s main function is to keep it nice and soft and fluffy. I love when blueberries bleed through baking–it gives the food a beautiful color as well as the flavor that works so well with the freshness of the lemon zest. I also sprinkled some white sugar on top of the loaf just to give it a layer of crunchy texture.

I knew this was a winner before I even sliced into it. It proofed up HUGE, and browned beautifully in the oven. The smells were divine. And the taste? No words. I wish I could bottle them up and send them through the screen to all of you. 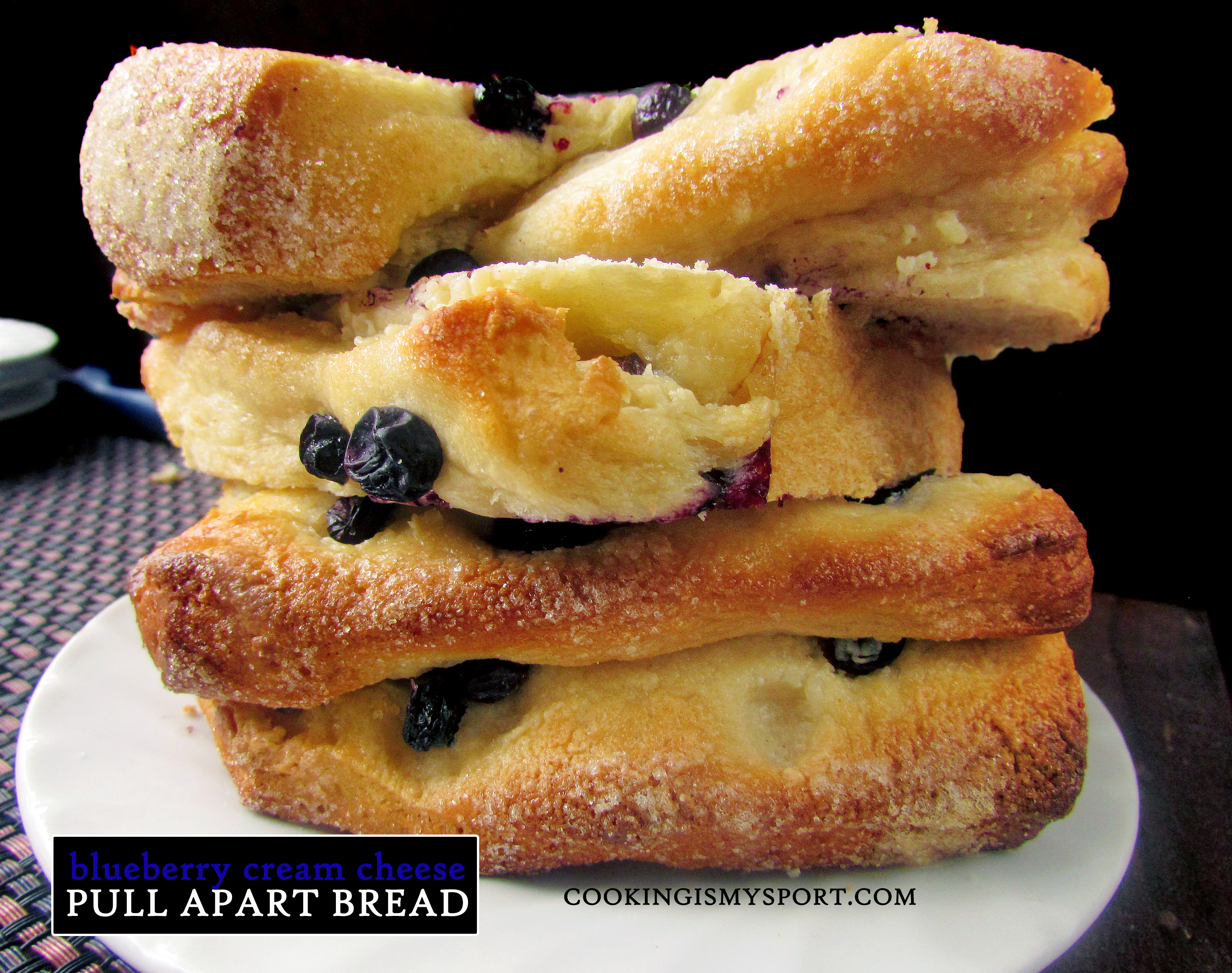 Also, you notice how it seems like photo overkill this week? That’s because during the photoshoot I was so impressed with how gorgeous this thing looked that I couldn’t put my camera down. It was love at first sight. I’m trying to help all of y’all capture that same magical feeling I had. I’m trying to make you drop everything to go and bake this bread. Is it working? Good. Now get to it.

Sharing at this week’s Fiesta Friday #224, co-hosted this week by Diann @ Of Goats and Greens.

In a large bowl of a standing mixer, sprinkle yeast over warm water. Sprinkle white sugar on top of that. Allow to sit for 10 minutes until proofed and frothy.

Use the paddle attachment to beat in honey, oil, eggs, and salt. Mix until just combined. Switch to the dough hook and add the flour one cup at a time, beating after each addition, graduating switching to kneading with hands as dough thickens. (You may not need to use all 8 cups, this varies according to location and time of year)

Sprinkle a work surface with flour. Turn the dough out onto it and use your hands to knead until smooth and elastic and no longer sticky, adding flour as needed.  Grease the standing mixer bowl, place dough back inside and cover with plastic wrap and a damp clean cloth. Let rise for 1 1/2 hours or until dough has doubled in bulk.

Meanwhile, grease two 9 x 5 loaf pans and preheat the oven to 350 degrees F. Combine the cream cheese with the lemon zest and nutmeg in a small bowl.

When the dough has finished rising, turn out onto your floured work surface and punch down the risen dough. Divide in half and keep one half covered in the bowl while you work with the other.

Roll the half out into a 12 inch square. Use a spatula to spread HALF of the cream cheese mixture over the dough. Sprinkle HALF of the white sugar on top of that, then HALF of the blueberries on the sugar, using your fingers to press the blueberries down into the dough. Use a pizza wheel, bench scraper or sharp knife to cut the square into 16 small squares. Make 4 stacks of 4 squares each. Place each stack on its side into one of the greased loaf pans. Gently separate the dough layers so the dough fills the pan (it doesn’t have to be neat). Repeat this step with the other half of dough and the other half of the cream cheese mixture, blueberries and sugar.

Cover both loaves with plastic wrap and damp kitchen towels and allow to rise in warm places until dough rises by half its size, about 1 hour. Just before baking, sprinkle the tops with the white sugar. Bake until loaves are browned & cooked through (195-200 degrees F inner temp), tenting with foil if browning too quickly. Allow to cool in pans for about 15 minutes, then loosen with a knife around the sides. Turn out onto a wire rack and allow to cool for about 30 more minutes before serving.