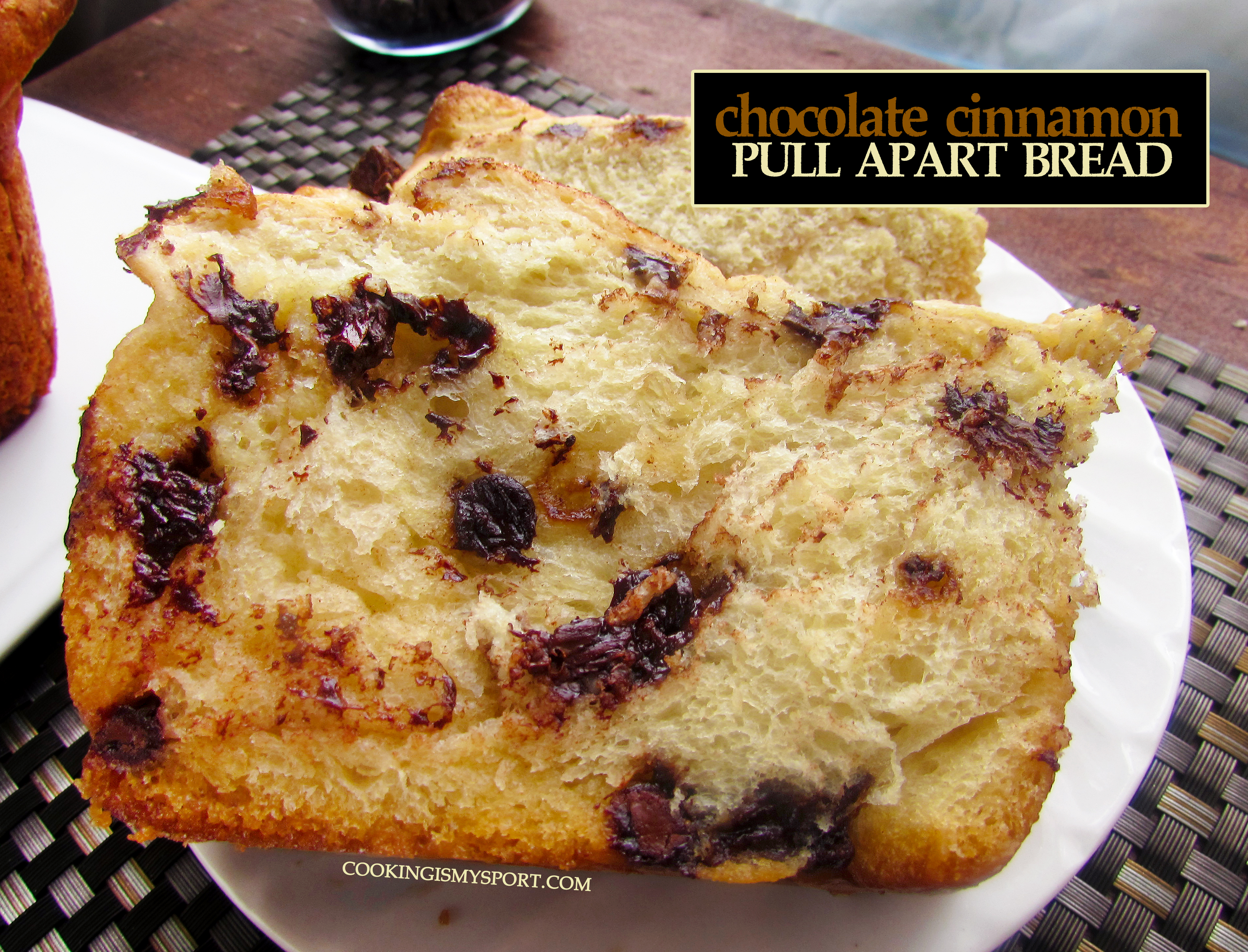 Call it old school or whatever you like, but I was raised to believe that when someone invites you over to their house for a gathering, it’s just good manners to bring something to eat to share.  At the very least, you need to OFFER to bring something. And to be honest, even if they say you don’t have to, you should still bring a bottle of something something to drink with the meal–alcoholic or non-alcoholic, it doesn’t matter.

What you don’t do is show up to someone’s house to eat empty handed. 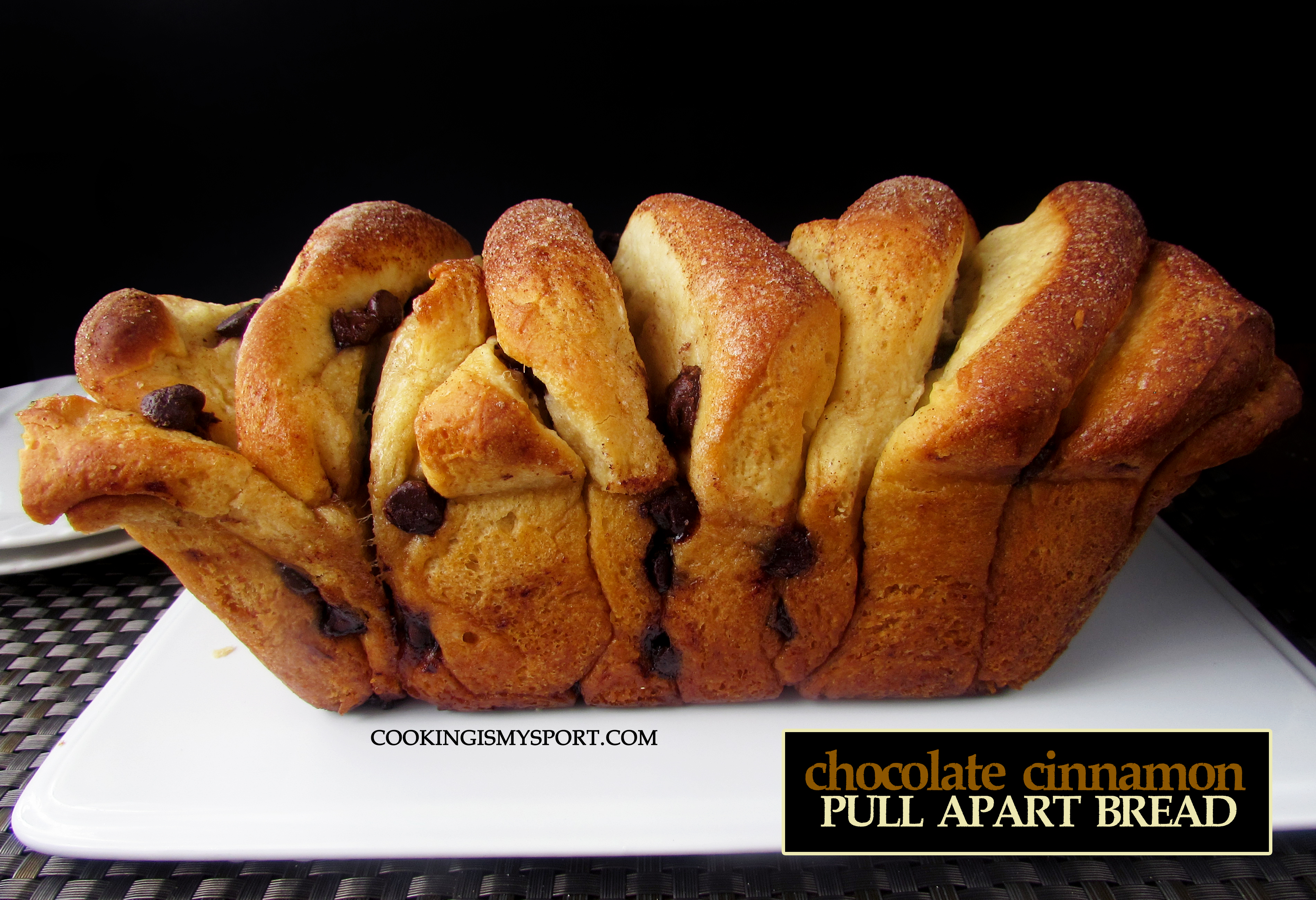 Being an introvert I don’t get out very much, but if I am going to go over to someone else’s house for a gathering then I’ll offer to bake something to bring. Just about everyone has a sweet tooth and just about everyone loves pound cake and butter cookies. (My deepest sympathies with those who don’t. I hope you get the help you need.) Often it’s either pound cake or butter cookies that I’ll bring, as those are both delicious desserts that don’t take a huge amount of effort and I usually always have the ingredients on hand in my house already.

Sometimes though, I’ll switch things up. 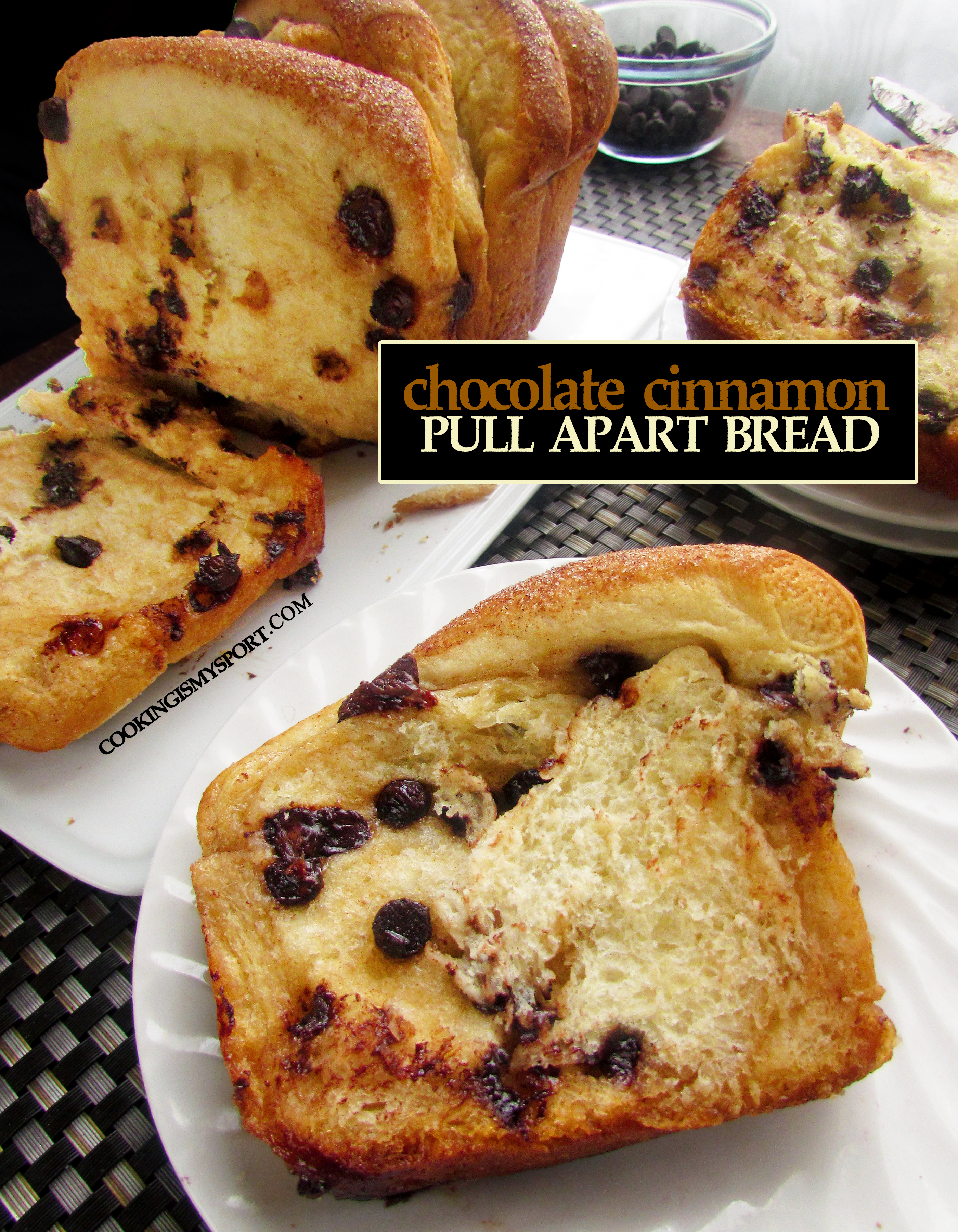 I went to a gathering for my niece’s preschool recently and since I was going to someone else’s house, I knew I’d have to bake something to bring along to eat. I knew I could’ve just made pound cake or butter cookies–but I made a last minute decision to take a different route and bake bread instead. I really liked where we ended up. I made two different kinds, the first of which I’m sharing with y’all in today’s recipe. 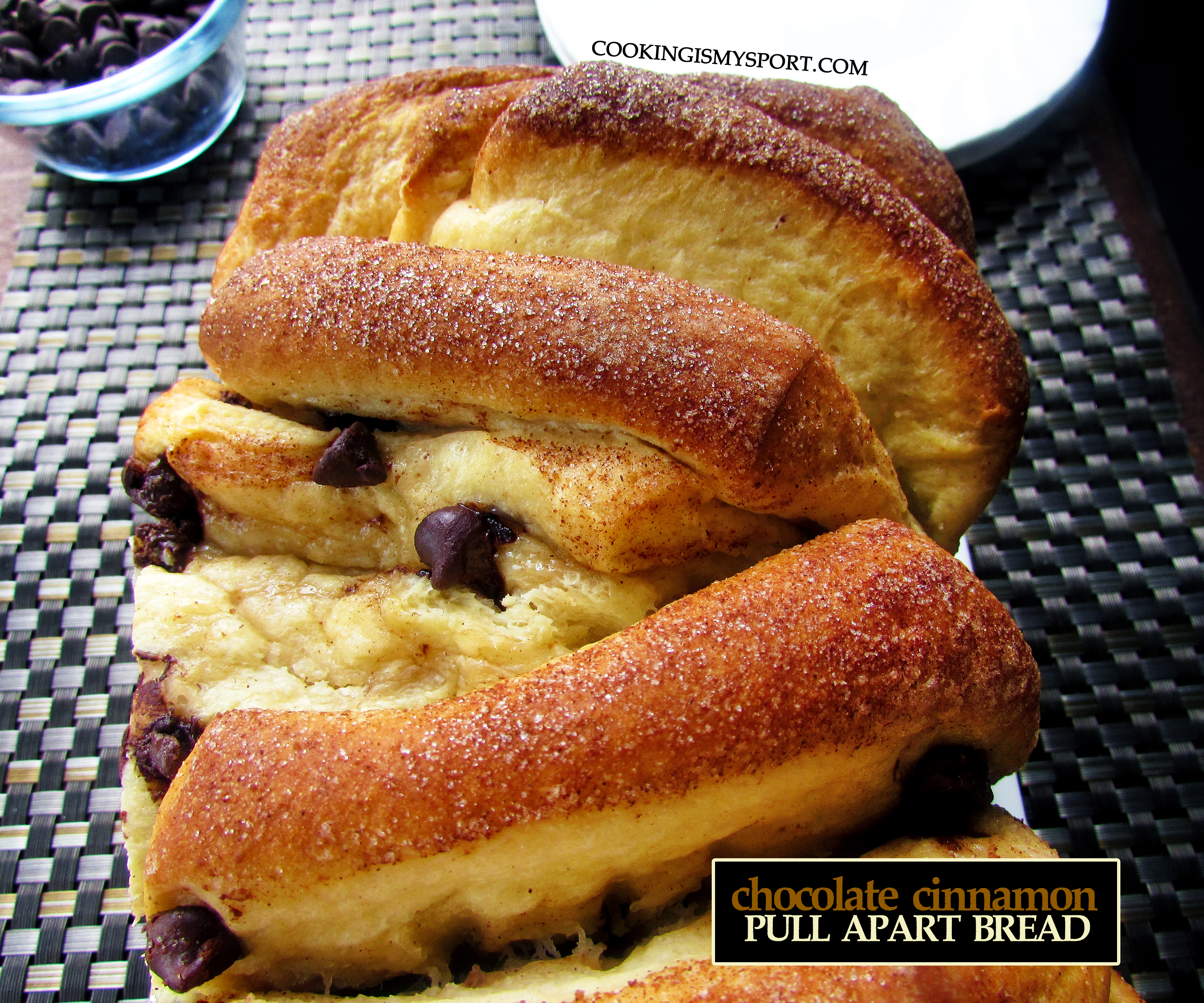 Pull Apart Bread gets its name from the way that the loaf is assembled. The dough is cut into imperfect layers that are easy to pull apart into portions, which makes it great for gatherings and sharing. The layers are usually stuffed with some kind of sweet or savory filling. It can be made with just about any sturdy yeast bread recipe. I went with the go-to Challah recipe that I use. It does make two loaves so either make sure you have two loaf pans or cut the recipe in half. (Although I would definitely make the whole recipe, share one loaf then just keep the other at home all for me, but that’s just my kind of lifestyle.) 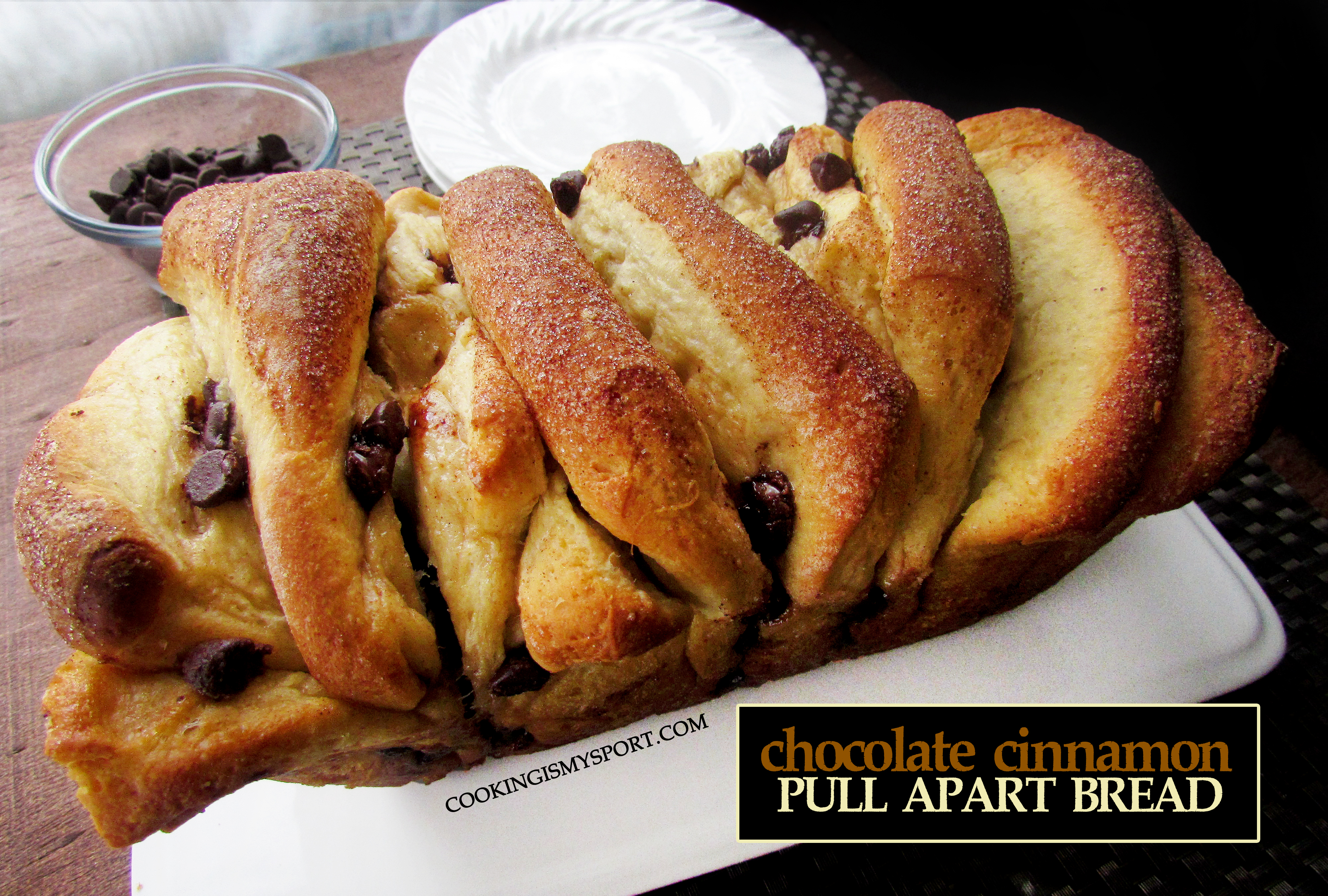 Don’t get intimidated by the step of layering the dough in the pan. It’s not complicated. You’re going to roll out the dough into one large rectangle, then spread the top with softened butter, chocolate and cinnamon. After that, you divide it into 16 squares. Make four towers from the sixteen squares. Layer those four towers into the pan–don’t worry about making them perfect, because they’re honestly not supposed to be. The more ‘imperfect’ they are, the more ‘perfect’ they’ll be for tearing off and sharing into thick slices. I will say that this loaf proofs HUGE and it will keep growing while it bakes, so it may not need the full second hour to double in size. 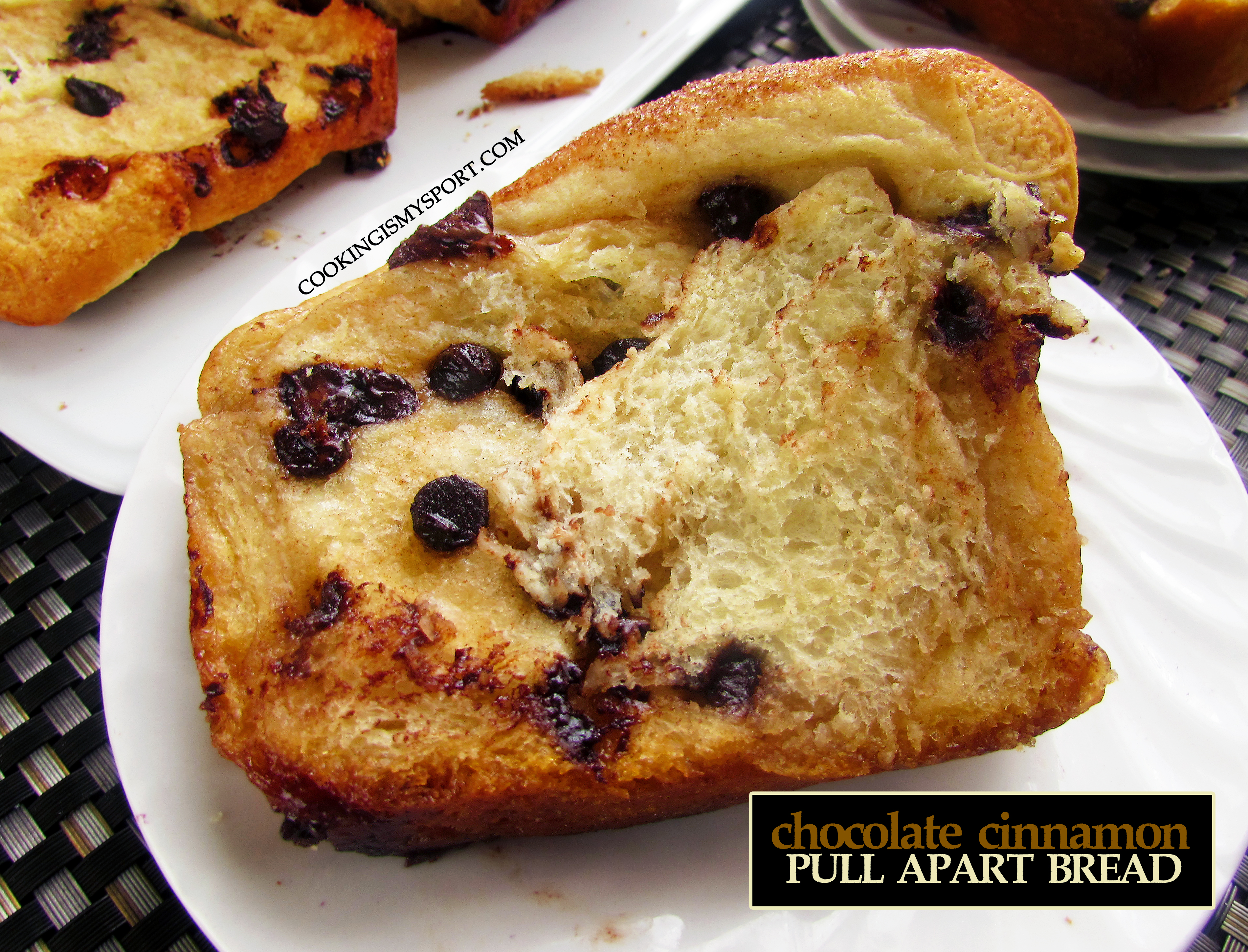 It took me a while before I learned to appreciate the flavor combination of chocolate and cinnamon, but once I learned my lesson, I never had to learn it twice. It works. I find that the cinnamon works to counter the slight bitterness of the chocolate and the flavor kinda reminds me of something I’d buy in a coffee shop. I sprinkled the top of the loaf with cinnamon sugar to give it a crunchy contrast of texture with the pillowy inside of the bread, which in true Challah fashion, doesn’t disappoint. This stuff went over like gangbusters and I think it’s a treat kids in particular would love, for obvious reasons. Though I can also see more sophisticated re-purposing uses for it like, say…French toast or bread pudding? Yum.

Sharing at this week’s Fiesta Friday #223, co-hosted this week by the fantastic Mollie @ The Frugal Hausfrau.

In a large bowl of a standing mixer, sprinkle yeast over warm water. Sprinkle white sugar on top of that. Allow to sit for 10 minutes until proofed and frothy.

Use the paddle attachment to beat in honey, oil, eggs, and salt. Mix until just combined. Switch to the dough hook and add the flour one cup at a time, beating after each addition, graduating switching to kneading with hands as dough thickens. (You may not need to use all 8 cups, this varies according to location and time of year)

Sprinkle a work surface with flour. Turn the dough out onto it and use your hands to knead until smooth and elastic and no longer sticky, adding flour as needed.  Grease the standing mixer bowl, place dough back inside and cover with plastic wrap and a damp clean cloth. Let rise for 1 1/2 hours or until dough has doubled in bulk.

Meanwhile, grease two 9 x 5 loaf pans and preheat the oven to 350 degrees F. Combine the chocolate with the white sugar and cinnamon in a small bowl. Combine the softened butter with the vanilla and salt in another small bowl until it form a thick paste.

When the dough has finished rising, turn out onto your floured work surface and punch down the risen dough. Divide in half and keep one half covered in the bowl while you work with the other.

Roll the half out into a 12 inch square. Use a spatula to spread HALF of the butter mixture over the dough. Sprinkle HALF the cinnamon chocolate mixture on top of that, using your fingers to press the chocolate down into the dough. Use a pizza wheel, bench scraper or sharp knife to cut the square into 16 small squares. Make 4 stacks of 4 squares each. Place each stack on its side into one of the greased loaf pans. Gently separate the dough layers so the dough fills the pan (it doesn’t have to be neat).

Cover both loaves with plastic wrap and damp kitchen towels and allow to rise in warm places until dough rises by half its size, about 1 hour. Just before baking, sprinkle with the cinnamon sugar. Bake until loaves are browned & cooked through (195-200 degrees F inner temp), tenting with foil if browning too quickly. Allow to cool in pans for about 15 minutes, then loosen with a knife around the sides. Turn out onto a wire rack and allow to cool for about 30 more minutes before serving.