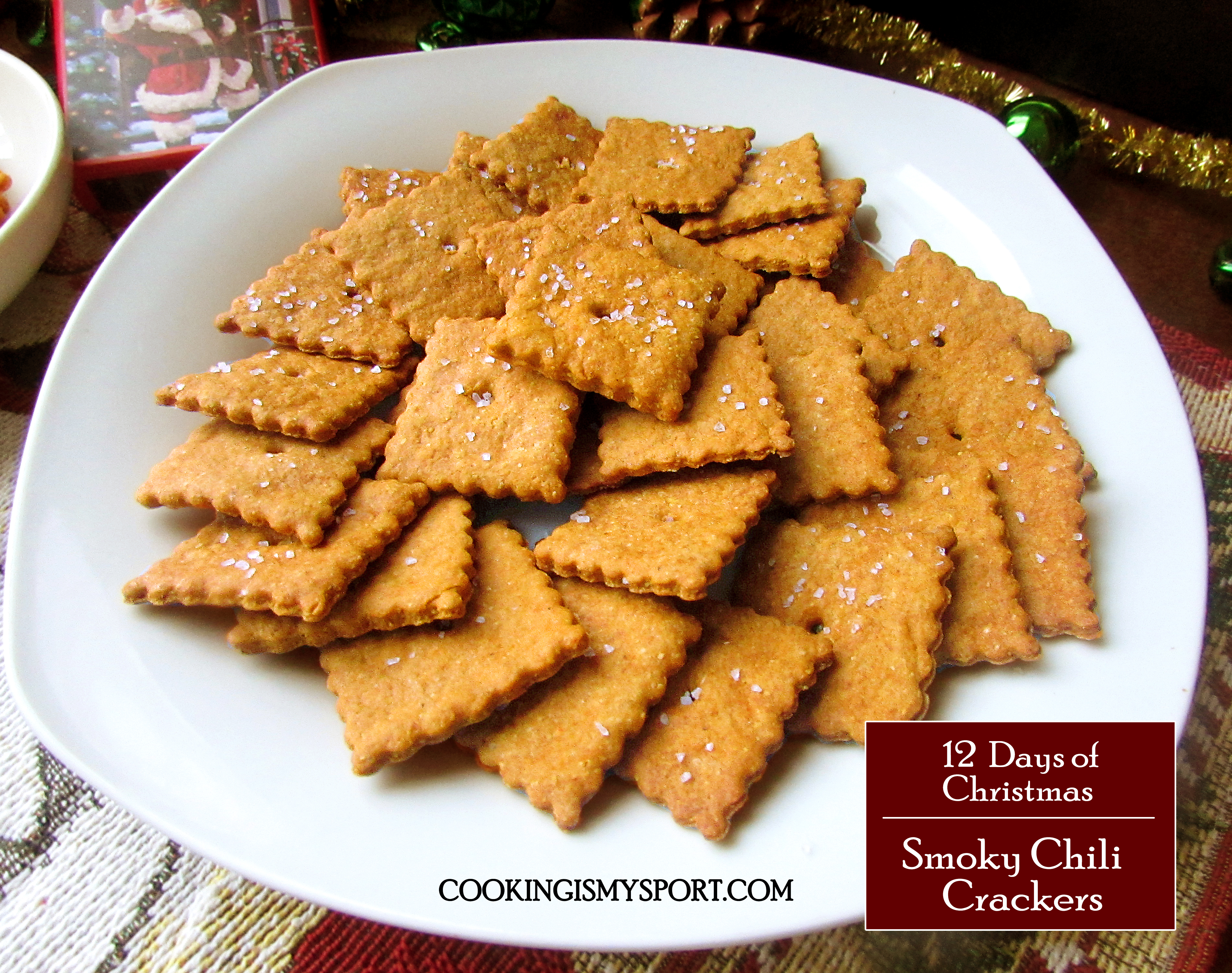 There are certain foods that I just can’t have in my house, for reasons.

When I was younger I loved the Keebler Chips Deluxe chocolate chip cookies, especially the ones with rainbow M&Ms. I could put away more than a few of those and STILL have an appetite for dinner. This was also when I had the metabolism of an Olympic athlete.

I love Waffle Crisp cereal, but I can’t let it be in my house. Why? Because I can eat half a box of Waffle Crisp handful by handful in one sitting, that’s why. I don’t even need milk. Just leave the box with me and go. Therefore, it’s not a good idea for me to have it. 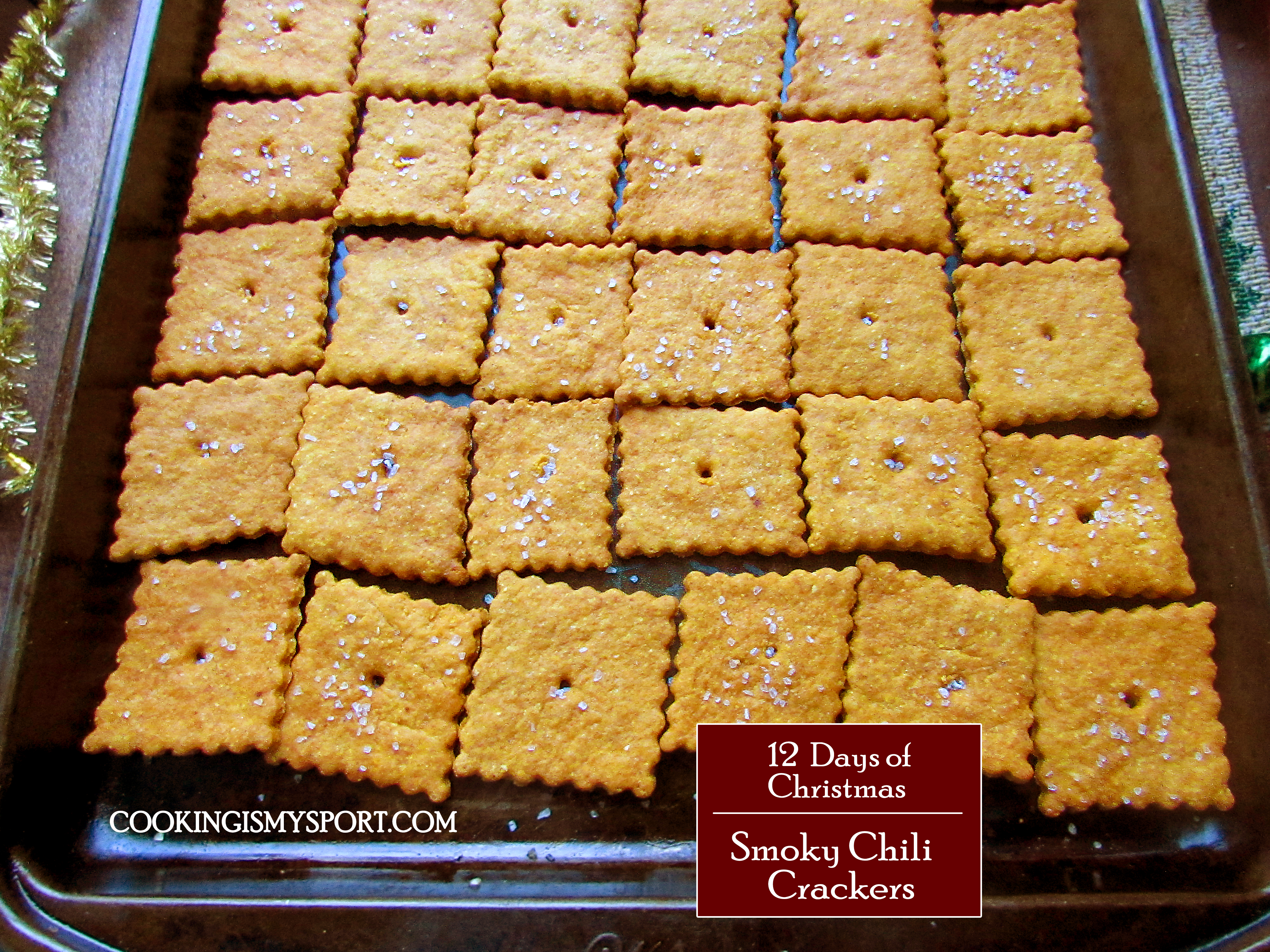 There’s one other snack that although I love, I know I just don’t have the willpower to summon portion control for and just don’t buy.

Any guesses? I’ll give y’all a hint.

It’s a cracker. It comes in a red box. It also looks very similar to today’s recipe. 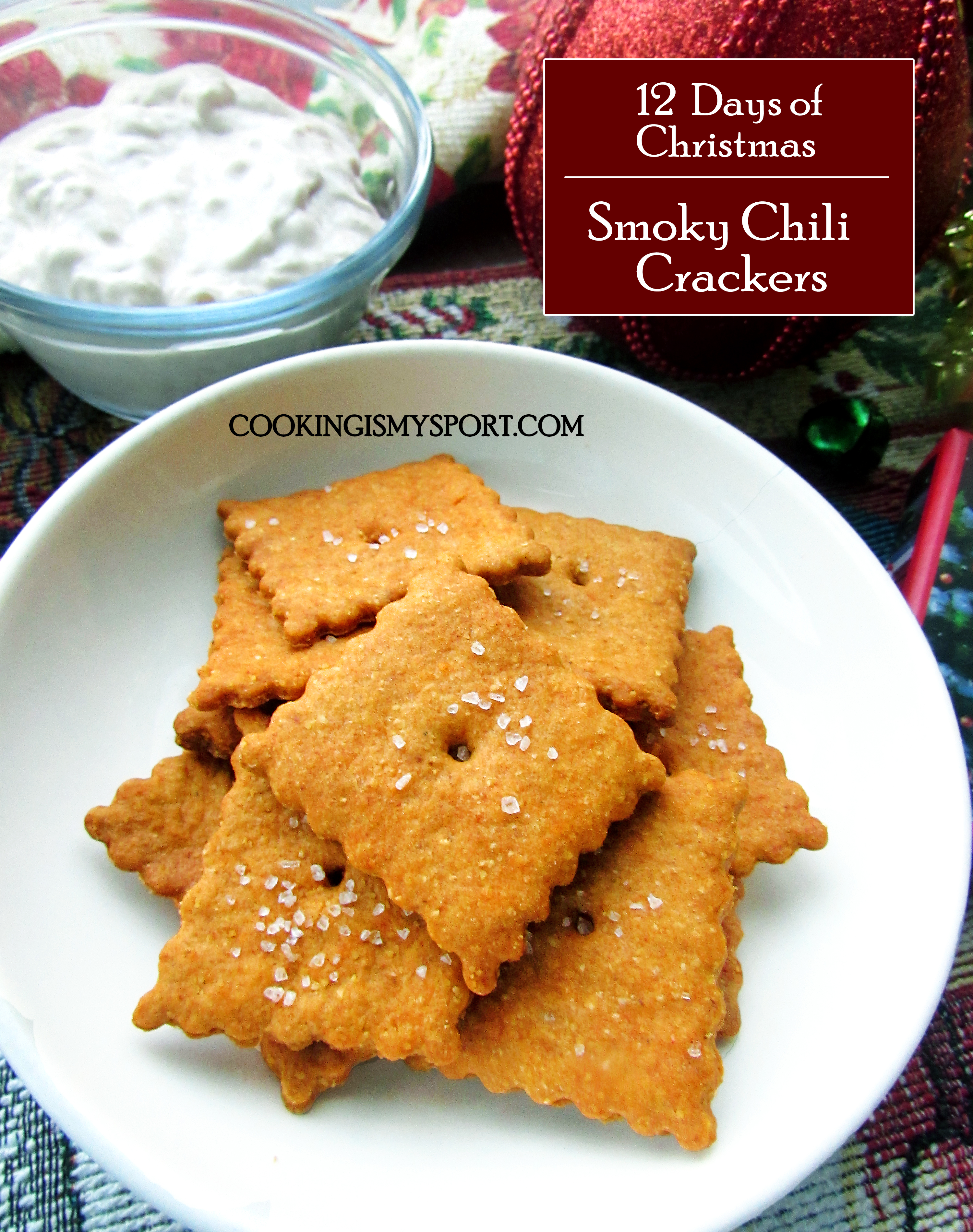 My love for Cheeze Its is especially weird in light of the fact that I…don’t like cheese in and of itself (except for on pizza, but that’s different). I don’t know, there’s just something about that salty flavor that I can’t get enough of or resist. Because I have such a hard time putting them down, I just can’t have them in the house. My salty munchie cravings I’ve found are much stronger than sweet ones. 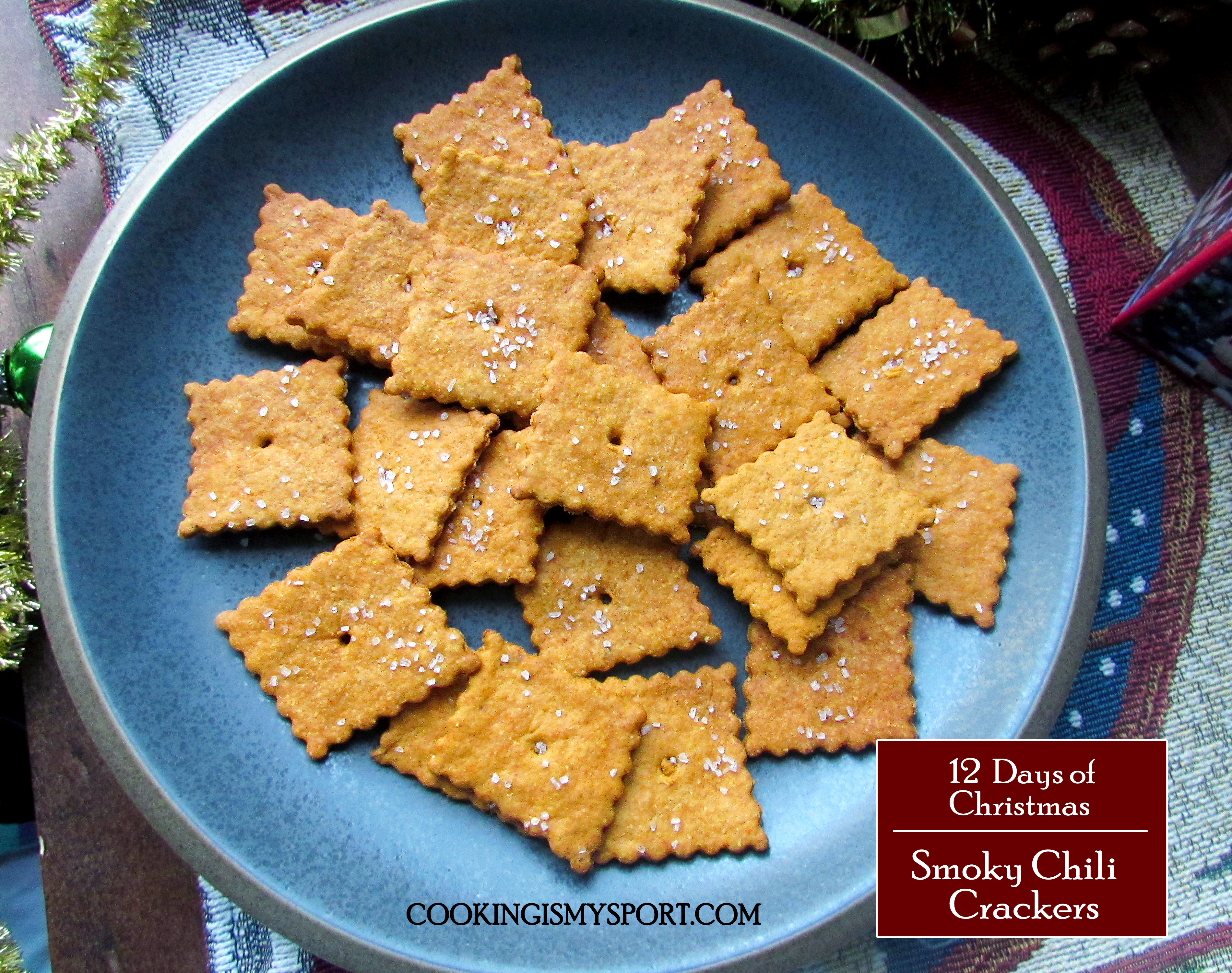 Although most people favor sweets at Christmas, I thought it would be nice to sneak a savory recipe or two in this year’s series. This is one of them. If you’ve been following the blog this year then you’ll know I’ve put out several homemade cracker recipes. They’re easy to make and I’ve found that the results are just as good (and sometimes even better) than the ones you can buy in the store. Some flavor profiles aren’t necessarily available through store-bought crackers and I find it fun to create my own and get something new that’s exactly what I want. 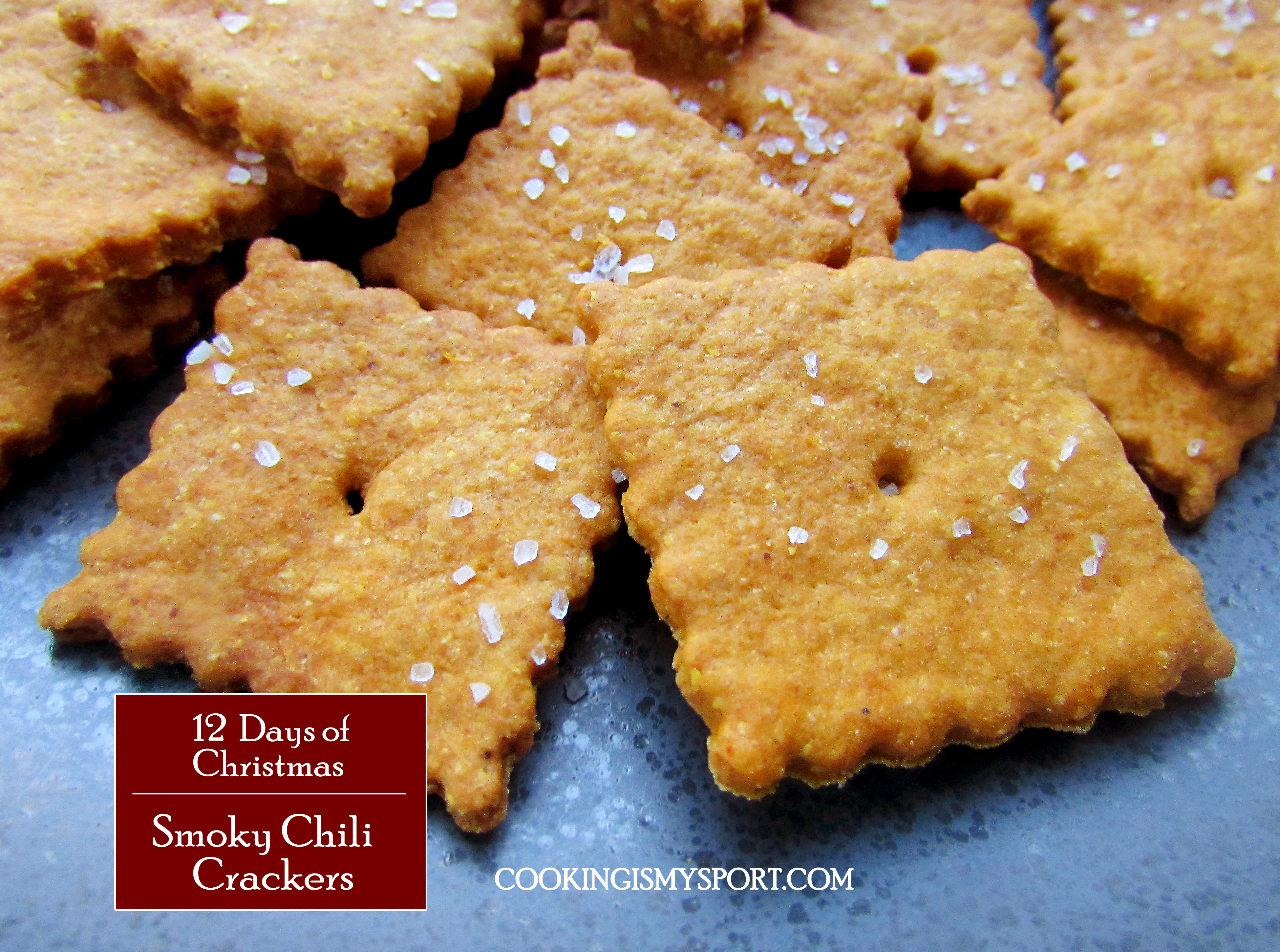 So, do these taste like Cheeze Its? No. But, I still REALLY liked how they turned out.

First of all, there’s no cheese in them. They’re flavored with cumin and smoked paprika, and have an earthy smoked flavor. The tomato paste balances out that smokiness and also gives them the warm orange hue. There’s also a touch of chili powder to give a kick on the back end. The texture is somewhat coarse thanks to the cornmeal in the dough. I think these crackers would be just fantastic with hummus, french onion dip, spinach dip or soup. Those who like raw cheese would also really enjoy eating a small wedge on top. Try and enjoy, will ya?

Cut in the shortening and tomato paste with a fork until the mixture looks like coarse bread crumbs.

Add enough water to make a workable dough. Wrap in plastic wrap and allow to rest in the fridge for an hour or the freezer for twenty minutes.

Divide the dough into quarters, working with one piece at a time. Keep the other 3 in the fridge while you roll out the other on a floured surface, like wax paper, or a pastry mat.

Roll the dough out to about 1/8 inch thickness (very thin). Cut into 1 1/2 inch squares. Repeat with remaining portions of dough. Freeze the crackers for about 10 minutes on a sheet pan.

Poke a hole in the center of the crackers using a fork tine, or the tip of a knife. Lightly spray crackers with cooking spray and sprinkle with the coarse salt.

Bake in the oven for about 20 minutes, until golden brown. Remove from oven and allow to cool on the pan.

Note: no one oven is the same, & different baking sheets bake cookies differently. Keeping this in mind, I will ALWAYS test bake one cookie before baking entire sheets of the whole batch, just to get a good idea of how long they should be in the oven and if I need to adjust the way I’ve cut, rolled them out, etc. I highly recommend that you do the same.