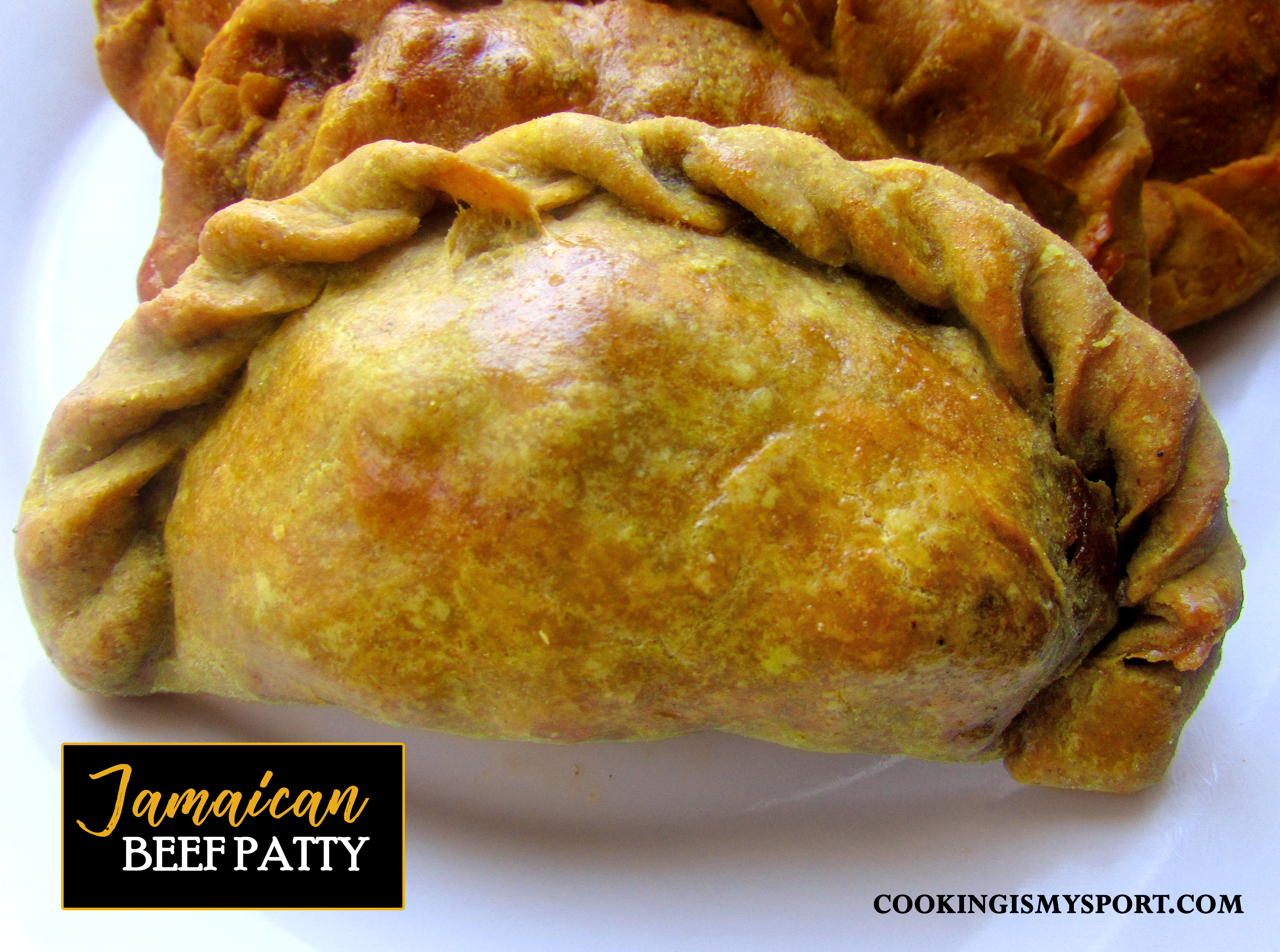 One of the very earliest recipes I did on the blog was one for meat pies that I make for my sister. (Don’t go back in the archives to look for it, I beg of you. My photography was abysmal in those days.) I started out with meat pies because for quite some time, I’ve had somewhat of a minor obsession with them, in just about any form. I don’t know why. Carbs and meat are perfectly fine all on their own. But for me, when you out them together they can get elevated to something even better. 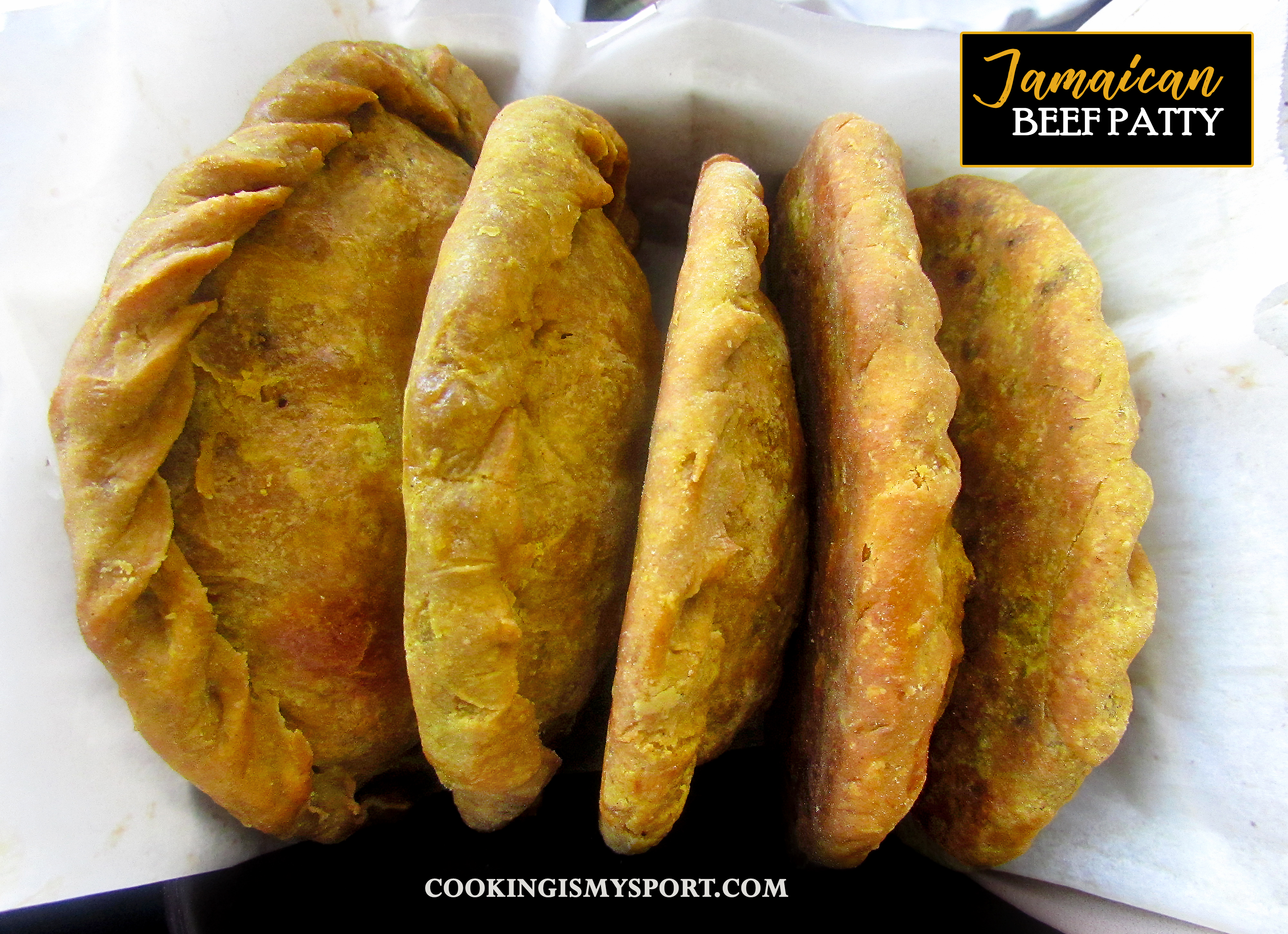 The pretty cool thing about the meat pie is that practically EVERY cuisine, culture & region has their own rendition of it. In Latin American cuisine, they have empanadas. In Canada they have Tourtiere. In Lebanese cooking they’re called sfeeha. Back where I come from in Michigan they’re called pasties. In Louisiana they’re Natchitoches.

For so many different people in so many different places to all find a way to work the meat pie in their cuisines means that there’s really gotta be ‘something’ to it worth trying out at least once. And frankly, once you’ve had a delicious meat pie, you’re not just going to want to make it a one time deal. You’ll keep coming back for more whether you’re buying or making them–that’s my experience anyway. 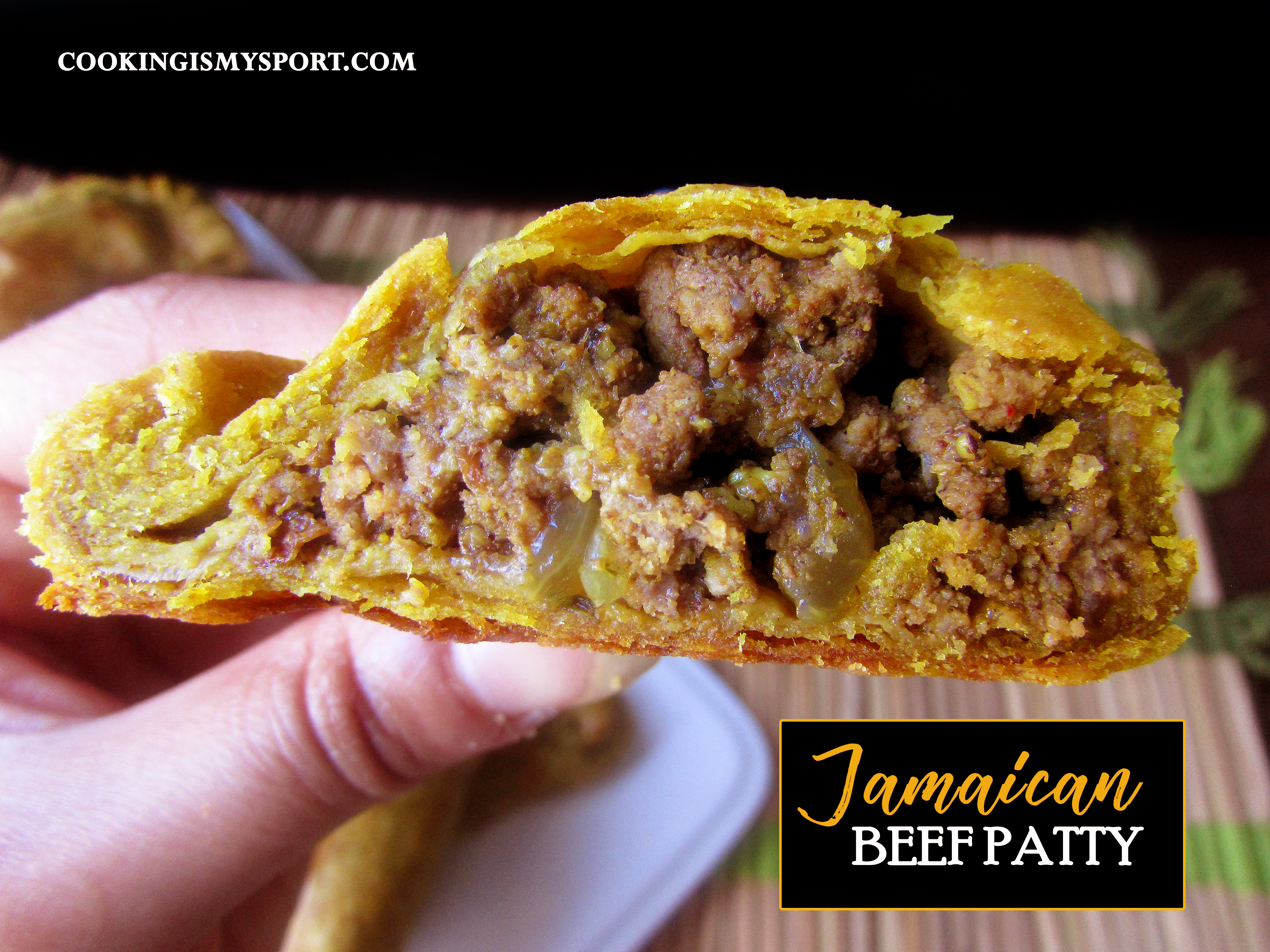 I left one very important type of meat pie off the list above on purpose. Jamaican Beef Patty are the subject of today’s post and (if you can believe it) making these was the first time I’d ever even tasted them before. I know, right? And I call myself a foodie. But better late than ever. And I’d be lying if I said I wasn’t a tad bit more pleased with my results than those I’ve seen in take out joints. I’ve had Caribbean food before, though not as often as now when we’re in the Bay area. But even at the occasions when I had it, beef patty was something that somehow always ended up getting left off the order. I’ll admit that may have been because when it comes to how I like MY meat pies, I can be tough to please.

For me, there are three components that you have to nail in order to make a good meat pie: first, the pie crust has to be buttery and flaky. No one wants to be chewing something that tastes like bland, dried up cardboard. Also, don’t be afraid to season the crust itself. Second, make sure there is enough moisture in the filling. I understand that we’re not making pot pie here, but it shouldn’t be dry as a bone on the inside either. Third, SEASONSEASONSEASOOOOOON that filling. I can’t tell you how disappointed I’ve been to try someone else’s meat pie (of several different kinds of cuisines) only to be disappointed because literally the only thing I can taste is browned, bland ground beef. Do better. Season with authority and make that filling pack an Ali-worthy punch. 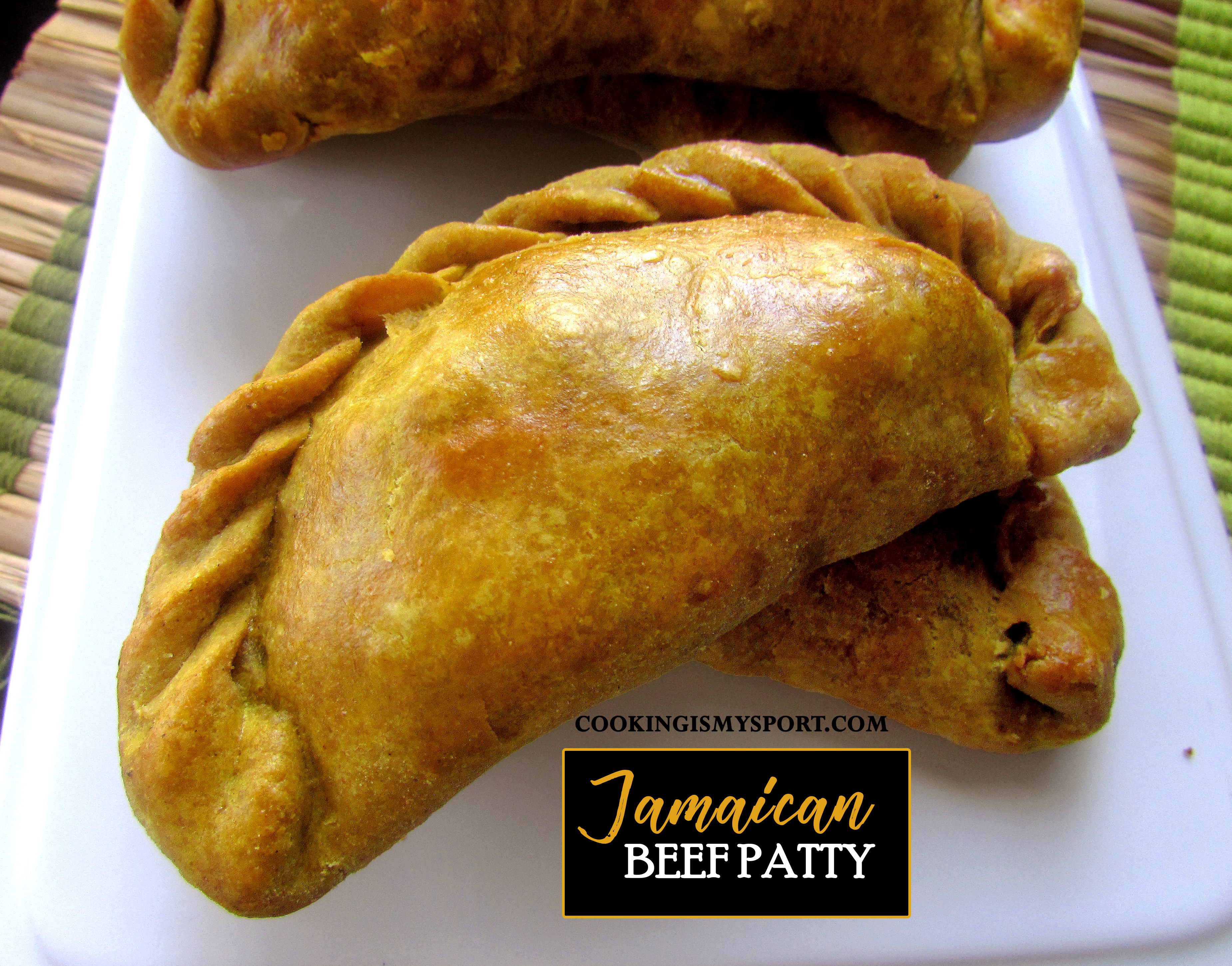 Having said all of that, I can safely say that this recipe checks off all those boxes. The pie crust is not only flaky and buttery by using a combination of butter and shortening, there’s curry powder in the dough that not only gives it wonderful flavor, but a pleasant golden brown color when it’s finished baking. The filling is cooked with more than enough spices to be anything but bland. It’s obviously got a kick from the Scotch bonnet pepper, but it’s also got an aromatic, earthy beef flavor that only gets better the longer it sits–so, I do recommend you follow the instructions to refrigerate it overnight to allow the flavors in the filling to develop. You won’t regret it. Andand! The addition of Worcestershire sauce, steak sauce and beef broth also ensures that it won’t be too dry.

Try these guys. It’s a nice little project to do that will get you a lot of rave reviews. Linking it up to this week’s Fiesta Friday #183, co-hosted this week by Sarah @ Sarah’s Little Kitchen and Shinta @ Caramel Tinted Life.

For Dough: In a large bowl, mix together the flour, salt and curry powder with a fork. Use the large holes on a box grater to grate butter directly into dry ingredients. Slice the shortening into small chunks and sprinkle into the flour. Mix together with a fork or a rubber spatula. (Mixture should resemble coarse bread crumbs, with chunks of butter/shortening throughout) Make a well in the center of the bowl and pour in the water, beaten egg and vinegar. Mix together until just combined, then turn out onto a cutting board or pastry mat dusted with flour. Working quickly, pat and press with your hands until you have a mass of dough that holds together. Shape into a disc, wrap in plastic wrap and refrigerate for at LEAST one hour, but preferably overnight.

For Filling: In a large skillet or Dutch oven, pour and heat the oil over medium heat. Brown the beef until no longer pink. Remove and drain the fat.  Don’t wipe out the skillet. Saute the onions until translucent, about 7 minutes, then add the pepper and garlic and cook until just fragrant, 1-2 minutes more. Add the beef back into the skillet, then Pour in the beef broth , sauces, spices, bay leaves and thyme leaves. Stir to combine, then allow to cook until most of the liquid has cooked off and evaporated, about 20 minutes. Taste & adjust for seasoning. Remove from heat and stir in the breadcrumbs. Refrigerate filling overnight to allow flavor to improve.

Preheat oven to 375°. Remove the  dough from the fridge and sprinkle a clean surface with flour. Roll dough out with  floured rolling pin to about 1/8 inch thick. Cut into 4-5 inch circles and place two heaping tablespoons of filling on each. Brush the bottom edge with water or egg wash, then pull the top edge over the filling and press down to fuse the two edges together. You may crimp the outer edges afterwards with a fork if you like. Repeat until you’ve used all of the dough, keeping unused rounds AND filled patties in the fridge as you work to keep the dough cold as possible.

Once finished, line a sheet pan with parchment paper or foil, and lightly spray with cooking spray. Place pies on pan. Brush the tops with the beaten egg, then bake on the middle rack until dough is cooked through & golden brown, about 25-30 minutes. Let stand about 5 minutes before serving.