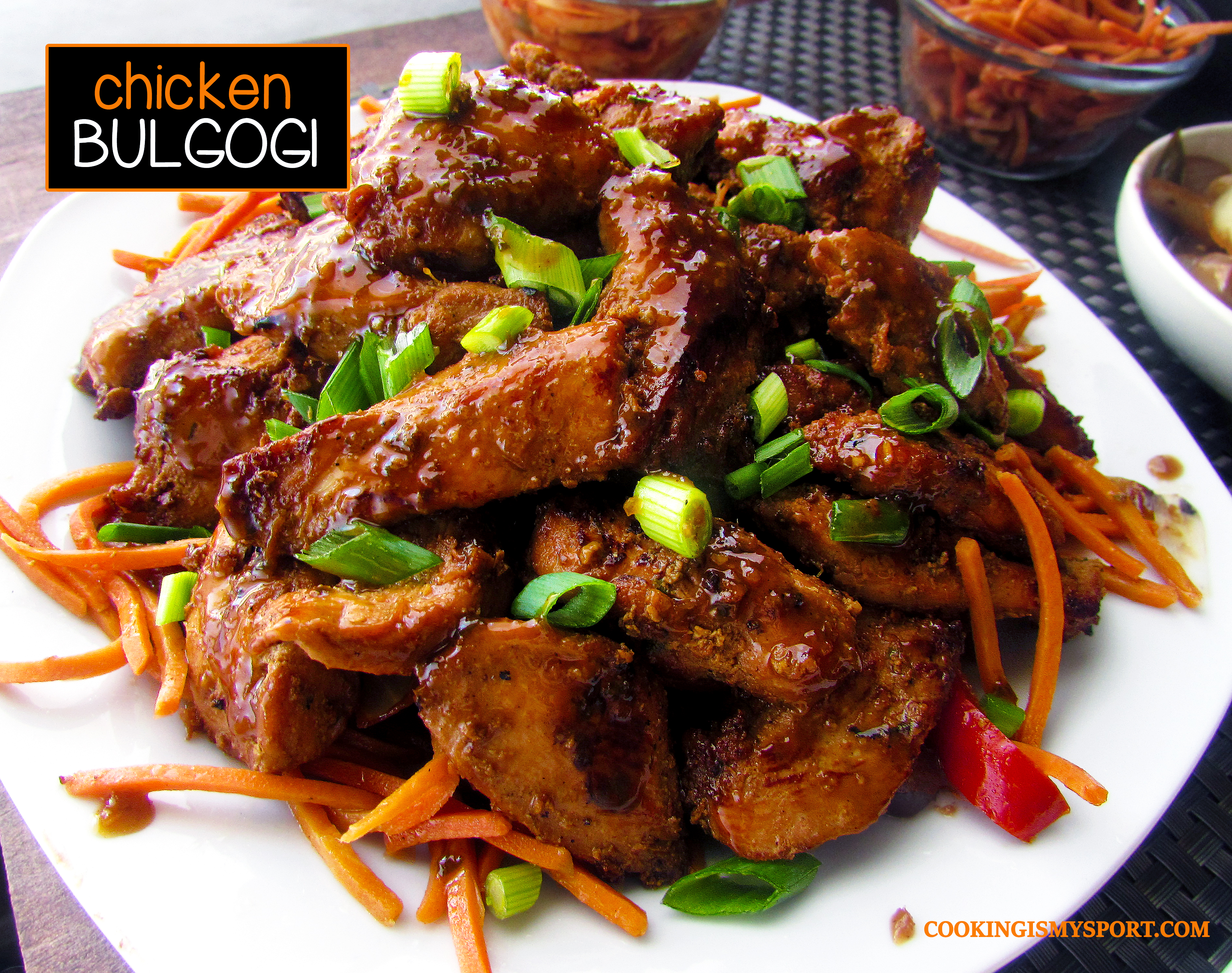 I don’t think y’all heard me the first time, so let me say it again for the people in the back.

It.is.HOT. Unbearably hot. I am not okay with this.

I’ve never been one that does well in extreme heat. It’s not a pretty picture. For one, it makes me straight up cranky. I start sweating, which makes me feel gross.  My hair gets frizzy at the roots, and other Black women will know just why and how much of a problem this is for styling & manageability. My sinuses swell and my nose starts getting congested so it’s harder for me to breathe. It’s pretty miserable. 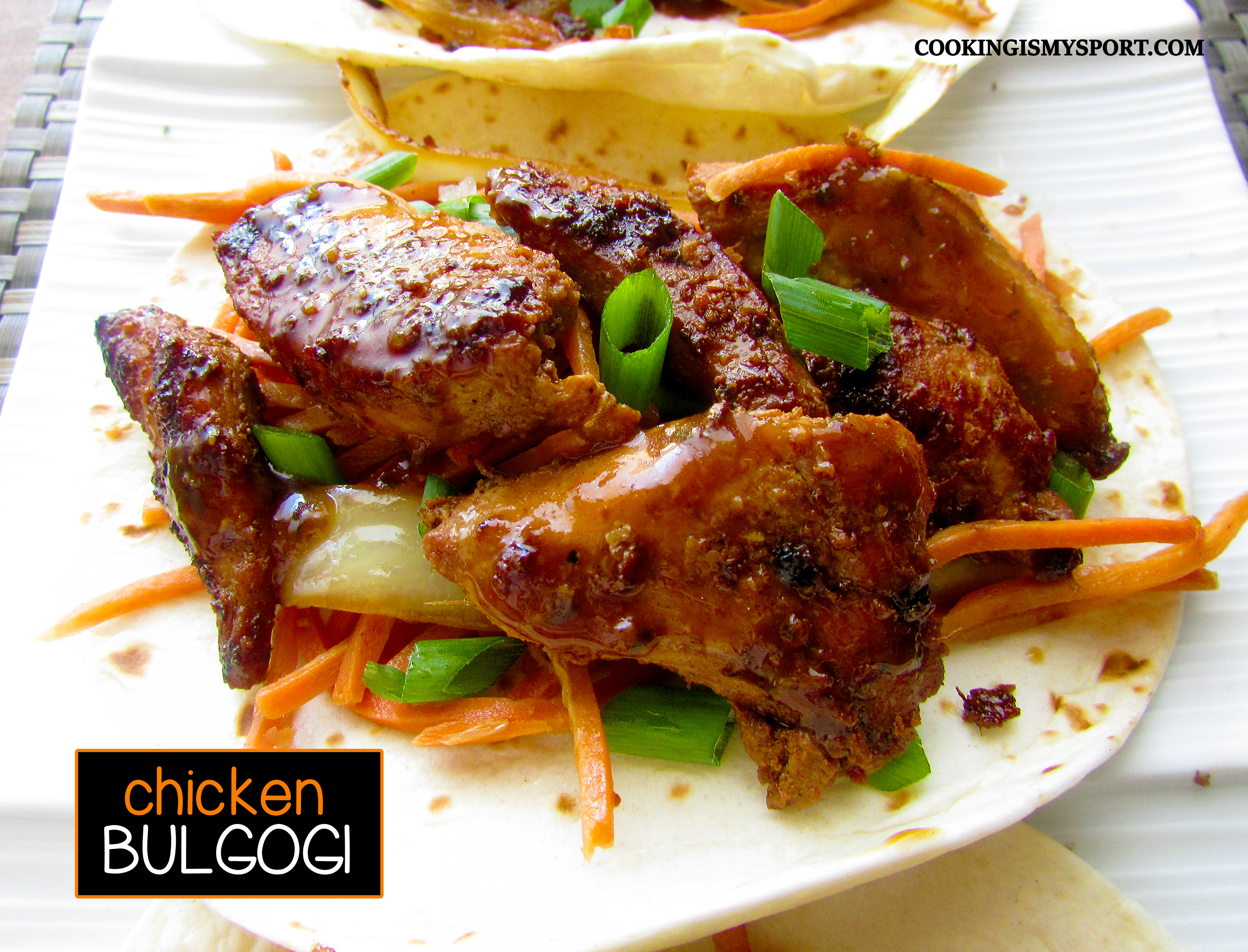 This is also an apt description of the weather here for the past week. The upper 80’s are already uncomfortable when you’re standing or walking in the sun without any shade. This week, the temperatures climbed all the way up into the mid to upper 90’s, and today, peaked in the 100’s.

Normally, I try to take my niece out for at least a few hours a day to play outside in a park nearby our apartment, or we’ll go downtown to the library, then walk back home. Needless to say, our plans for this week were disrupted by the heatwave. Even if the mere idea of going out in that kind of heat didn’t make me want to melt, it’s just too hot to take a small kid out in without the risk of them getting dehydrated or heat stroke. So, we switched up the routine a bit and spent some time in Berkeley where my sister’s working for the summer, where the temperatures are MUCH cooler. The U of C campus there is very pretty and she was able to ride her scooter around on it. 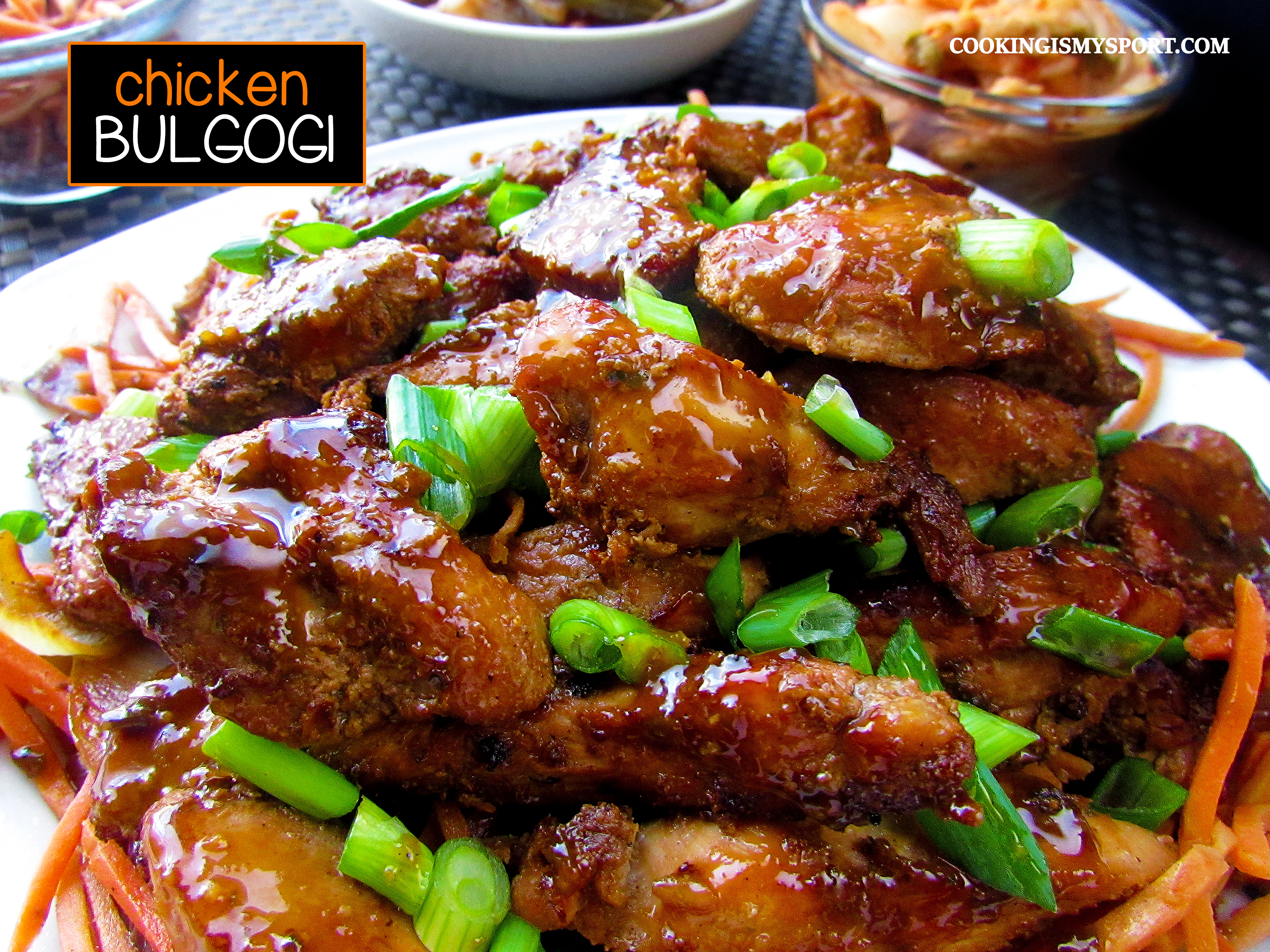 With such extreme weather, I’m sure that the very last thing most of us in the States feel like doing is switching on an oven, whether you have air conditioning or not. I’m certainly not gonna do it. Fortunately, today’s recipe doesn’t require you to.

Let’s just get the obvious question out of the way first, shall we? For those who don’t know off the bat (and no, I didn’t know either before cooking it myself) it’s pronounced BOOL-GO-GEE. It refers to a Korean dish where the protein is sliced thin, marinated, then cooked over high heat over a grill or on a stove top. The marinade usually has soy sauce, sesame oil and garlic in it, and is usually also slightly spicy. 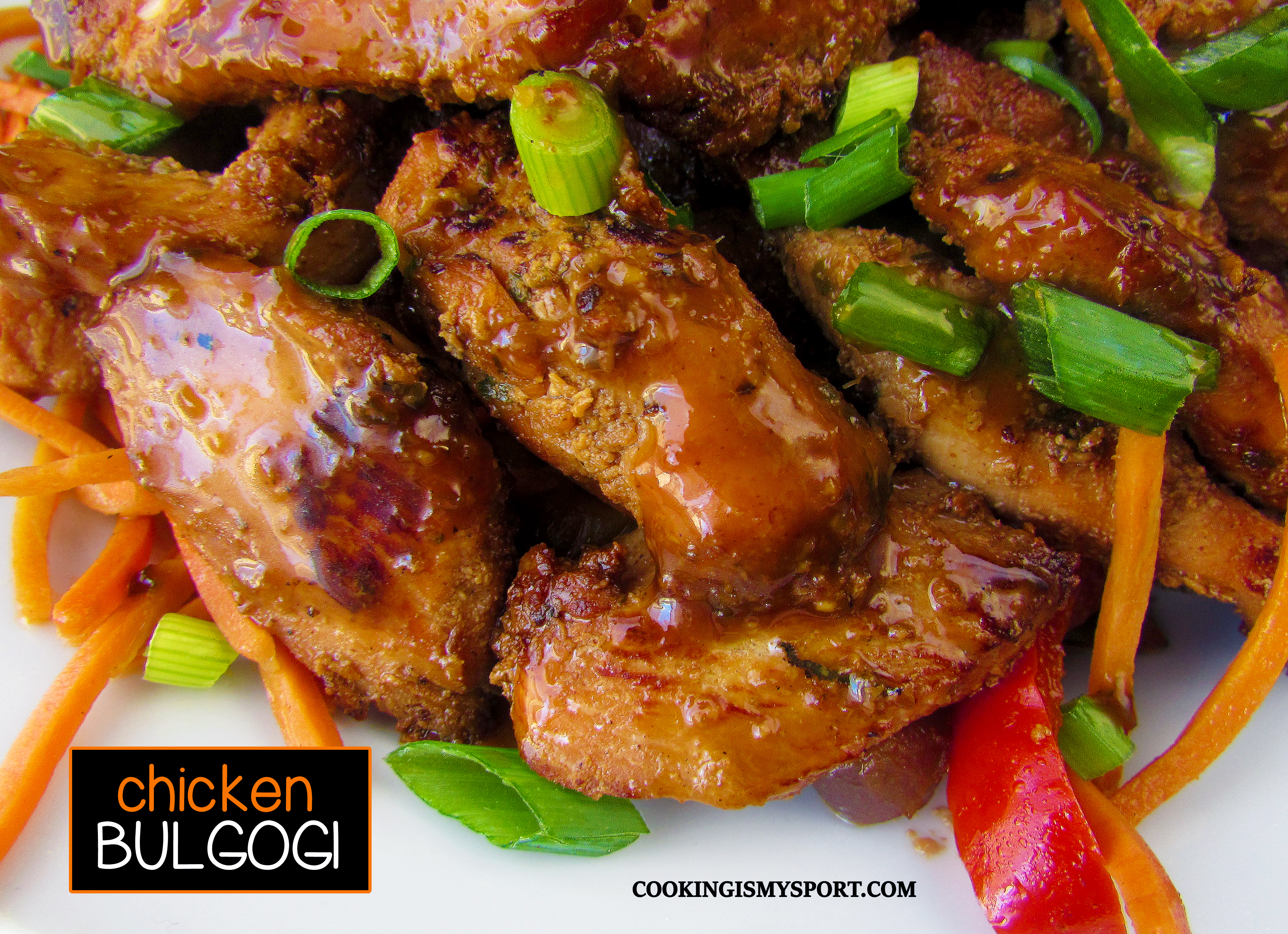 There are several Korean restaurants in our area, but I thought that a nice way to introduce us to bulgogi, rather than pick a random spot we found on Yelp and hope for the best, would be to instead follow the basic guidelines for it in terms of the process and form a recipe suited to our tastes who’s ingredients still qualified as ‘bulgogi-fied’. That way, I could make adjustments to fit our palates, not waste money and still come out with a good result. 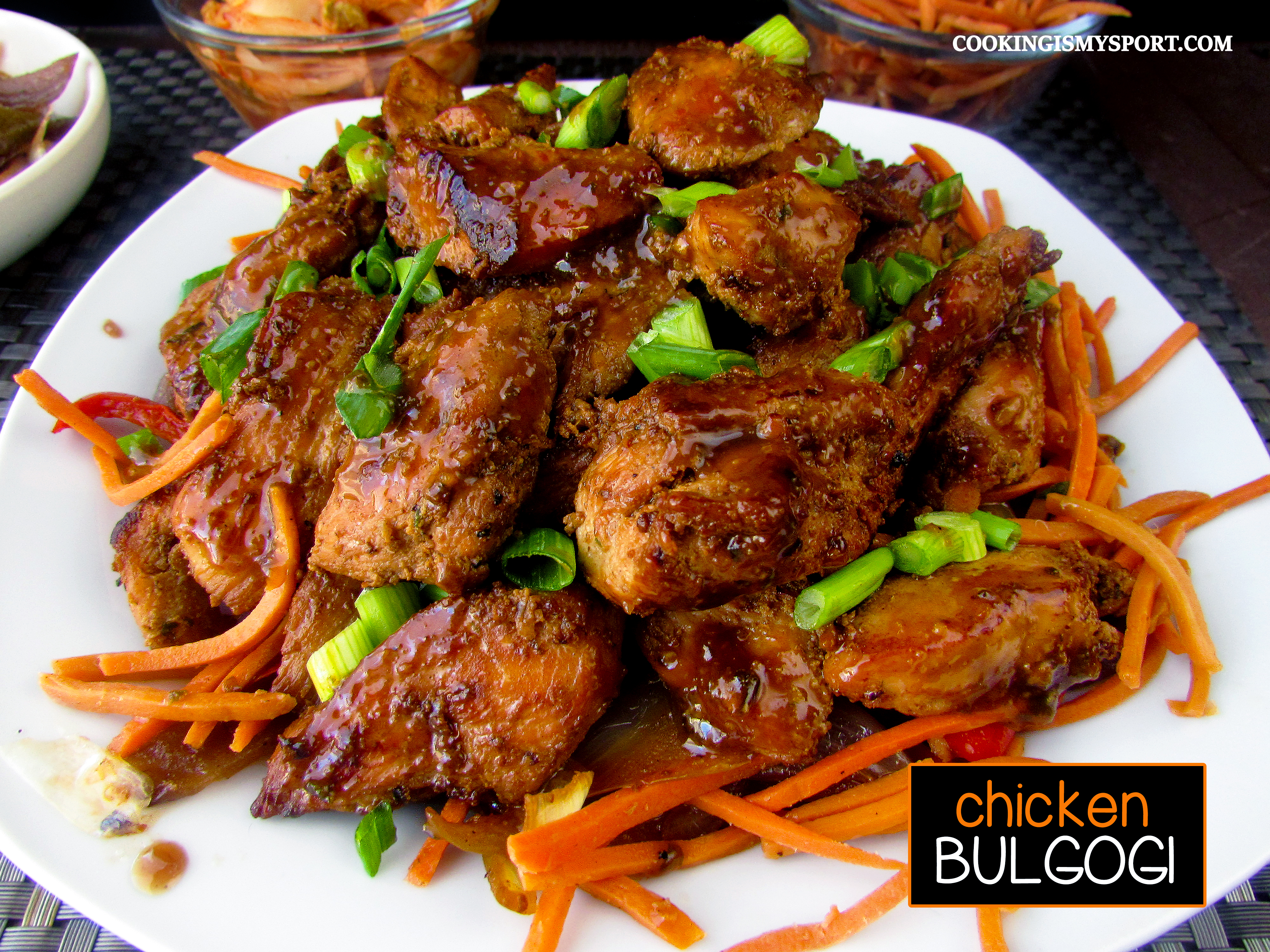 The most obvious change I’ve made from a traditional bulgogi is that I’ve used chicken rather than the typical beef or pork.  You guys already know I’ll swap chicken in for just about anything if I can get away with it, and I really do think I got away with it here. The flavors of the marinade I think would work well with any meat and white bird meat is usually more inexpensive than red cow or pink pig.

I usually set my meat in an overnight marinade to let the flavors really absorb into the meat but if you’re crunched for time or trying to make this into a weeknight dinner, I think a quick marinade would still get the job done and deliver results that everyone will like. The sauce that gets drizzled on top of the chicken is outstanding: it’s got that earthy saltiness from the soy sauce and added fish sauce, the sweet from the brown sugar and mirin, then it’s given just enough of a kick from the ginger and five spice. Some people like to eat their bulgogi over rice. We ate ours in tacos shells, drizzled with some of the glorious sauce and some shredded carrots and green onions. I even added some spicy kimchi on top of mine: it really was a PERFECT bite.

Sharing this at Fiesta Friday #177, co-hosted by Ai @ Ai Made It For You and Jhuls @ The Not So Creative Cook. Stay cool guys!

Place the chicken in a gallon size re-sealable Ziploc bag.

Set aside about half of the marinade in a bowl. Pour the other half over the chicken. Seal the bag securely and shake, making sure to coat the chicken evenly with the marinade. Refrigerate overnight or at least three hours.

Heat vegetable or canola oil over medium high heat in a large Dutch oven or non-stick skillet. Add the chicken in batches, frying in the pan until golden brown and crisp at the edges. When finished, place in a bowl and keep the bowl covered with aluminum foil.

Strain the remaining marinade to rid of excess bits, then place in a small saucepan over high heat. Whisk in the cornstarch and allow to cook until reduced and thickened into a sauce, about 10-15 minutes.

Spoon the chicken into tortilla shells and garnish with cabbage, carrots, radishes, scallions or desired toppings.