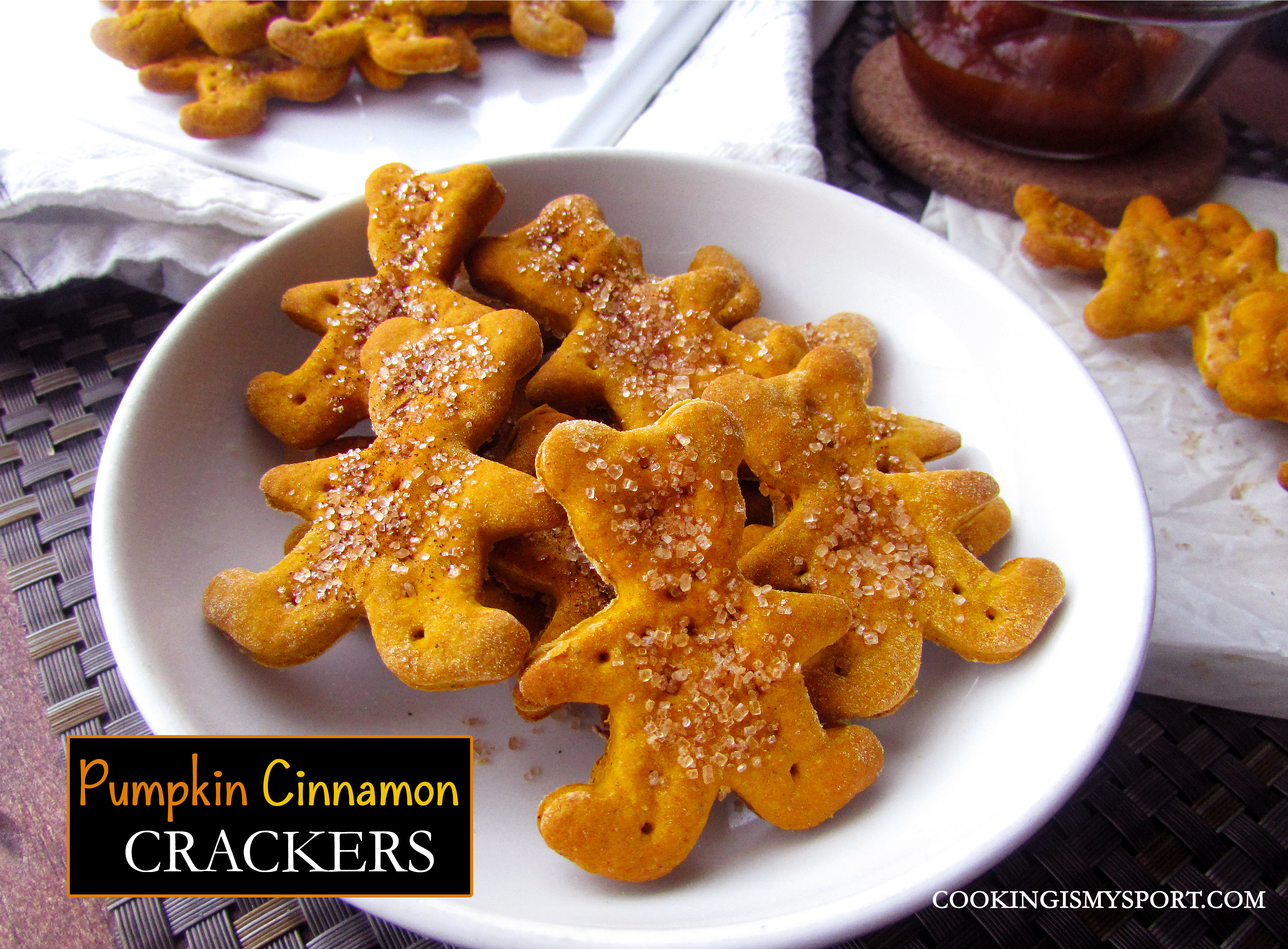 A few weeks back, I shared my first attempt at making crackers with you guys. They were a huge hit with my taste buds, and because they were just so easy to put together, I said that it made me enter into a cracker-making spree for the next few weeks or so where I tried out several other flavors & recipes.

You didn’t think I was playing, right? I’ve definitely tried like…three different cracker recipes and probably made close to about 100 since then. I’ve loved them all. And now, you guys are going to love them too. Trust me on that. 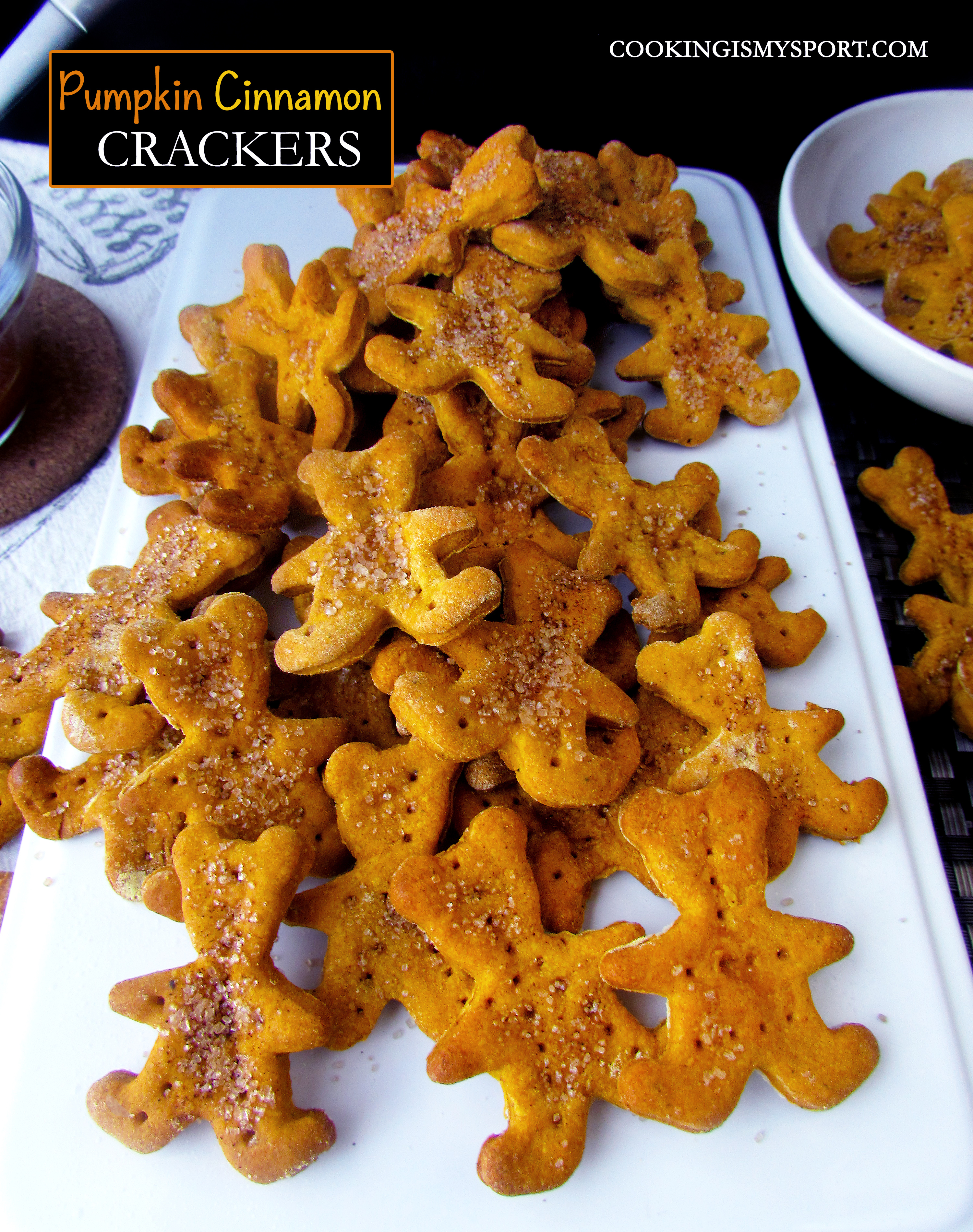 So I did a quick Google Shopping search and as it turns out, pumpkin cinnamon flavored crackers are something that aren’t exactly in huge supply from the major cracker name brand producers. Triscuits has a limited edition Pumpkin Spice flavored Triscuit that they put out, but it’s a limited edition release that only gets exposure at, you guessed it: autumn.

It’s not autumn right now though. And suppose you’re like me and want to cure that pumpkin spice itch now and don’t feel like waiting for August? 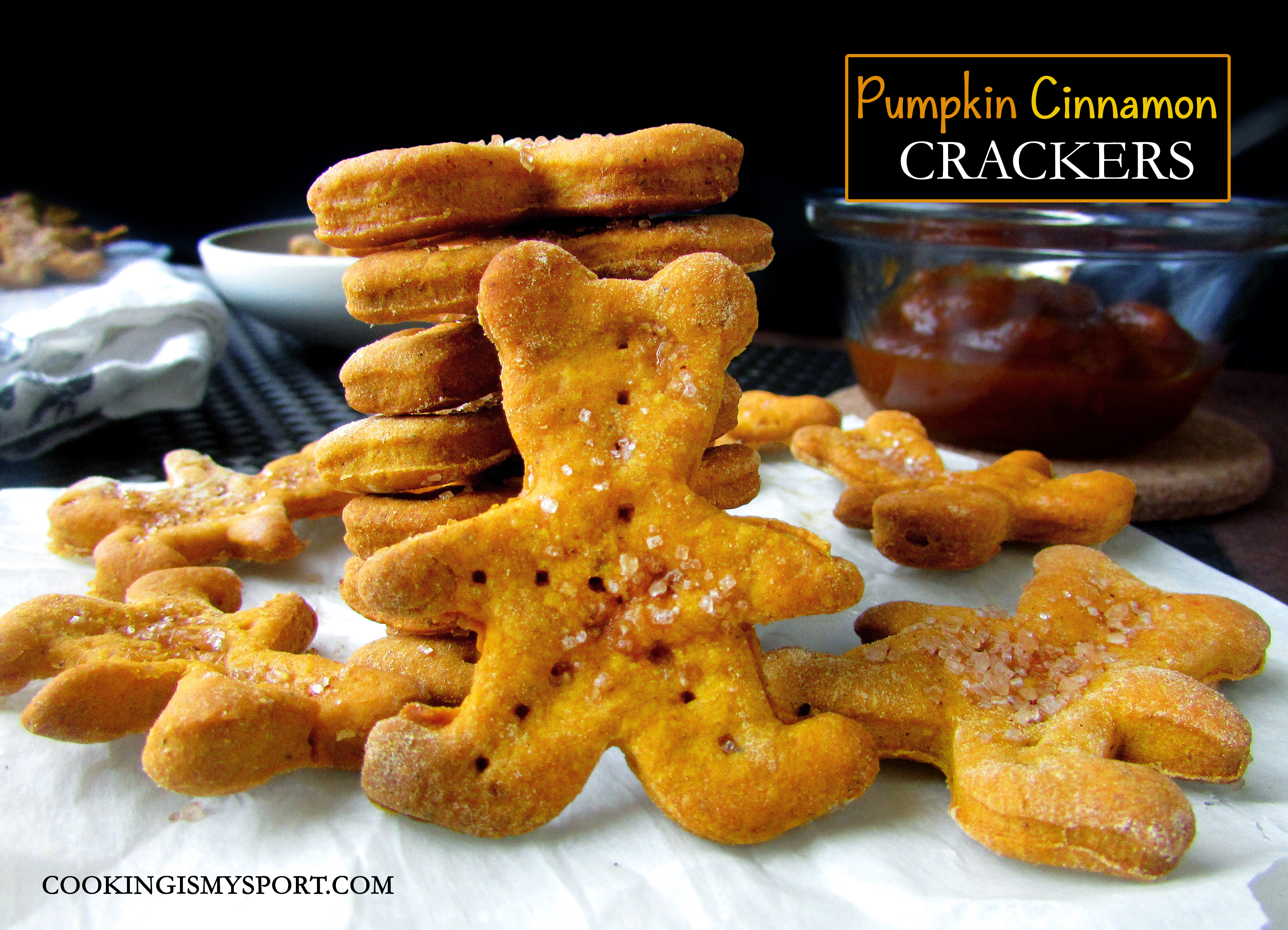 And if any one of you start to object and say that making your own crackers is too hard, time-consuming and a waste of effort–just…hush. Making crackers from scratch is actually simple. It’s worth it, guys. It really is. We’ve established that already with these curry and ginger crackers. That was my first attempt, it was a success, and to this day I still don’t know what took me so long to start doing this for myself.

It gets a bad rap from being so mass marketed in the fall, but I love pumpkin spice baked goods and there’s not a person who can make me feel bad about it. 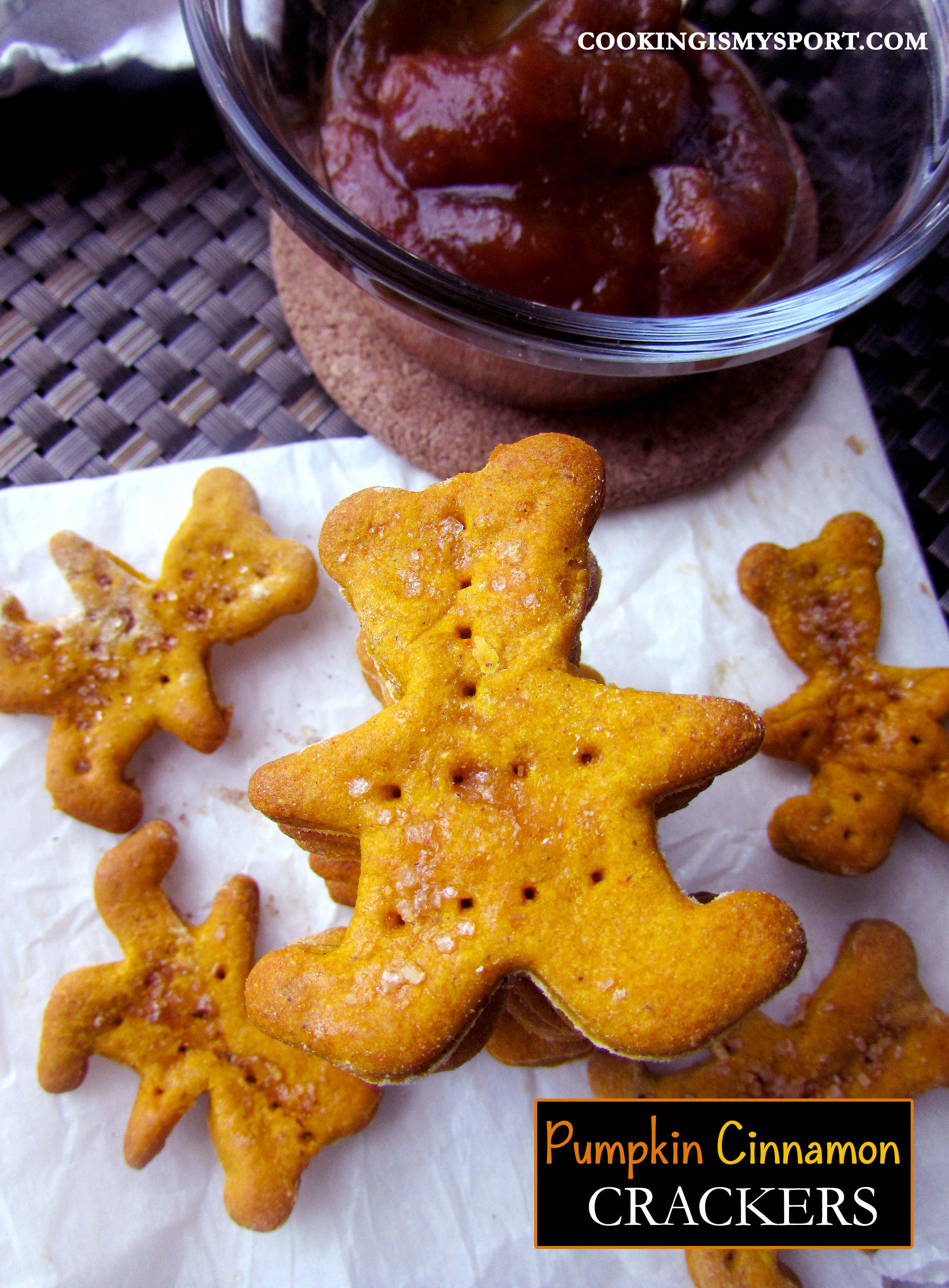 A few tips: I used a teddy bear cookie cutter I had, but you can feel free to use any shape you like. You could even just cut them out into rough squares with a pizza cutter if you want, just don’t skip the step of pricking your shapes with the fork. You need the holes in the dough to help the heat circulate through the dough as it bakes and for air/steam to escape it, which will help them to crisp up better and avoid air pockets in the crackers themselves.

If you have a broiling pan, I’ve found that the top tray with the slats works REALLY WELL for baking crackers, even better than normal cookie sheets. The holes in the pan help the heat circulate better through the dough and nowadays, it’s my go to for them in general. 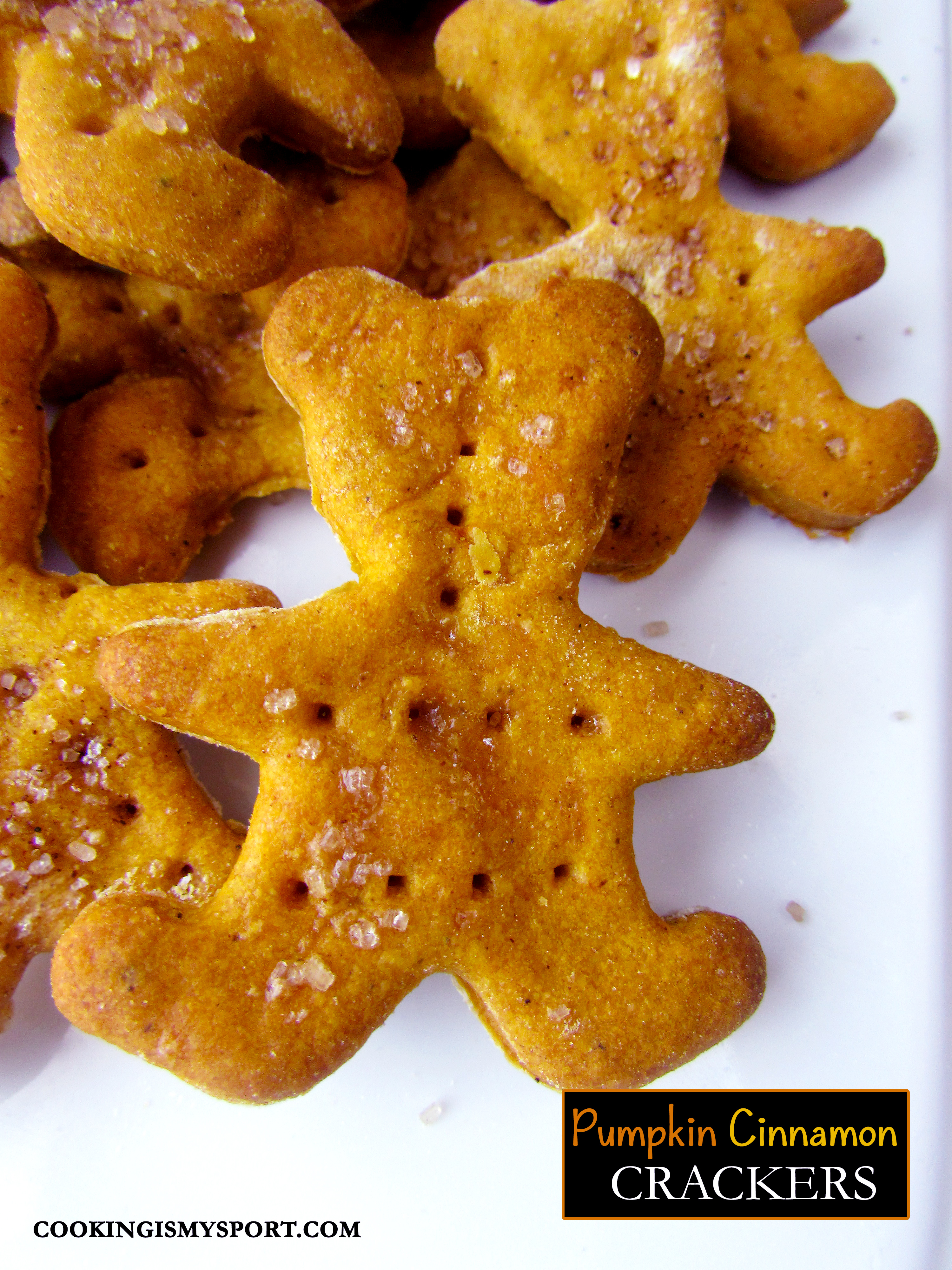 These are, of  course, ready to eat just as soon as they’re given time to cool crisp up, but I’ve found that the flavor does improve after they’ve sat for a few days. So if you can possibly help it and be patient, I’d put the cooled crackers in an air tight jar or bowl for about 2 days, then come back to them and go ham.

They’re not overly sweet as I wanted the flavor of the pumpkin and spices to come through, but you can always add about a tablespoon or two of extra sugar if you’re making them for kiddies or you just have an extra large sweet tooth yourself.

Oh, and yes: they are very yummy. I may or may have had trouble with portion control when eating them. I couldn’t possibly confirm, though.

Linking this post up to this week’s Fiesta Friday #164, co-hosted this week by the lovely  Jhuls @ The Not So Creative Cook.

Recipe Adapted from Pearls on a String

Preheat the oven to 350 degrees Fahrenheit.

In a medium bowl, combine all of the dry ingredients and mix together with a fork. Set aside.

In the bowl of a standing mixer (or using a handheld one) beat the butter together with the pumpkin and vanilla extract until evenly combined (it’s fine if there are still bits of butter showing).

Slowly add in the dry ingredients. Switch to the dough hook and continue to beat until a ball of dough forms (it shouldn’t take very long)

Mold the dough ball into a thin disc, wrap the disc in plastic wrap and place in the freezer for about 30-45 minutes. Prepare 2 baking sheet with parchment paper.

Sprinkle a clean work surface  (like wax paper or a pastry mat) with flour, and flour a rolling pin as well. Roll the dough out to 1/8 inch thickness. Using a small cookie or biscuit cutter, cut out desired shapes for crackers and place the crackers on the prepared parchment paper baking sheets. Place the baking sheets in the freezer for about 15-20 minutes.

Using the tines of a fork, prick the crackers evenly, pressing through the dough to make holes. Sprinkle the tops with the coarse turbinado sugar. Bake in the oven for 20-25 minutes, until golden brown. (You can bake them longer for extra crunchy crackers, just be sure to cover them with foil so that they don’t get too browned or burn.)

Transfer to a wire rack to cool completely.