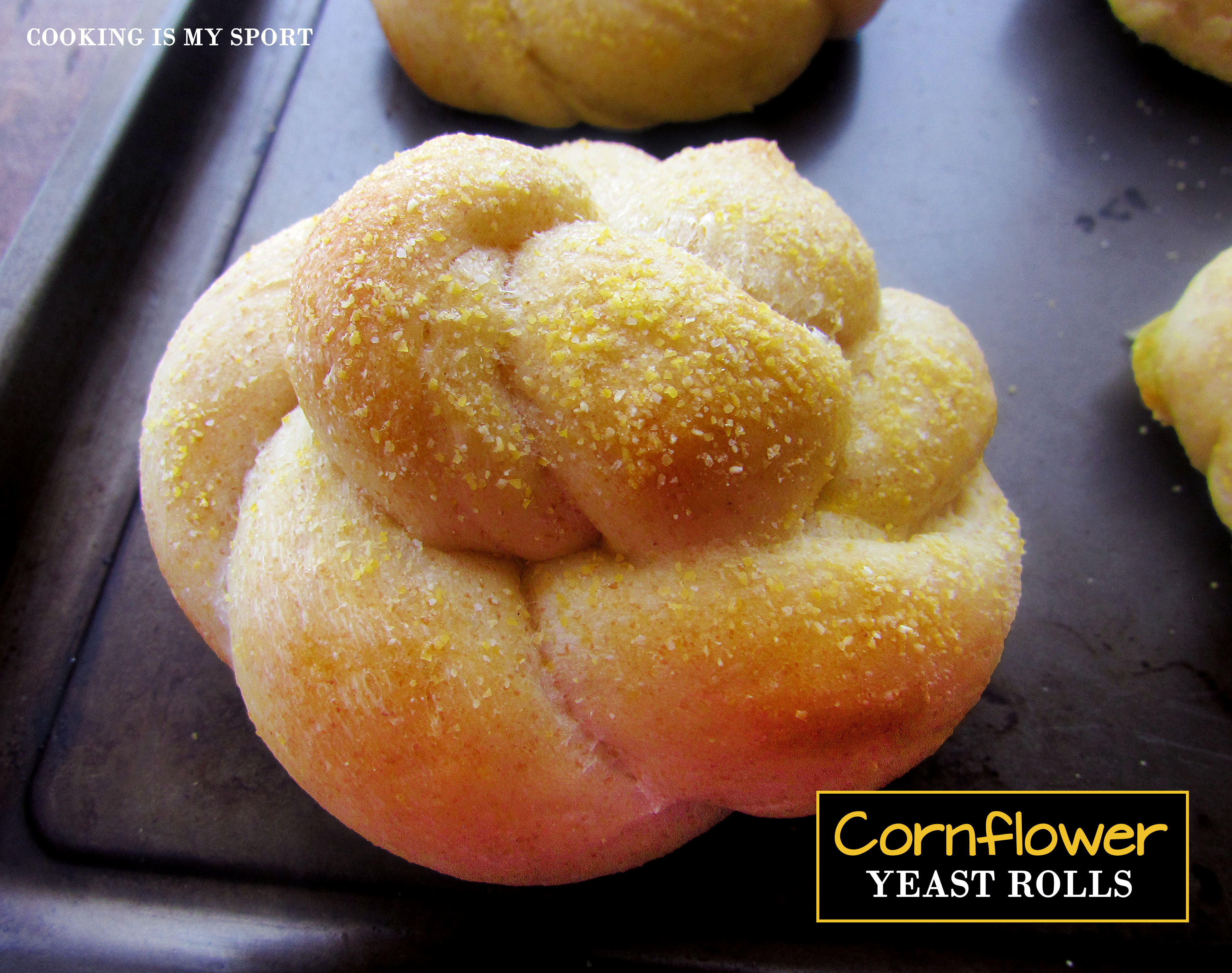 Fear not: I come bearing carbs.

Plenty of carbs. Plenty of pretty carbs, at that.

For some of you that alone is enough to get your attention., amiright?

On the day that I made this particular batch of bread, I was on my own in the house and had a little bit more time than usual, so I decided I would play around a little bit with the dough. I doubled the below recipe and tested out 3 random, different shapes I’d been running through my mind lately to try out. I decided that whichever one turned out the prettiest, I would feature on the blog and tell you guys how to pull off yourselves. 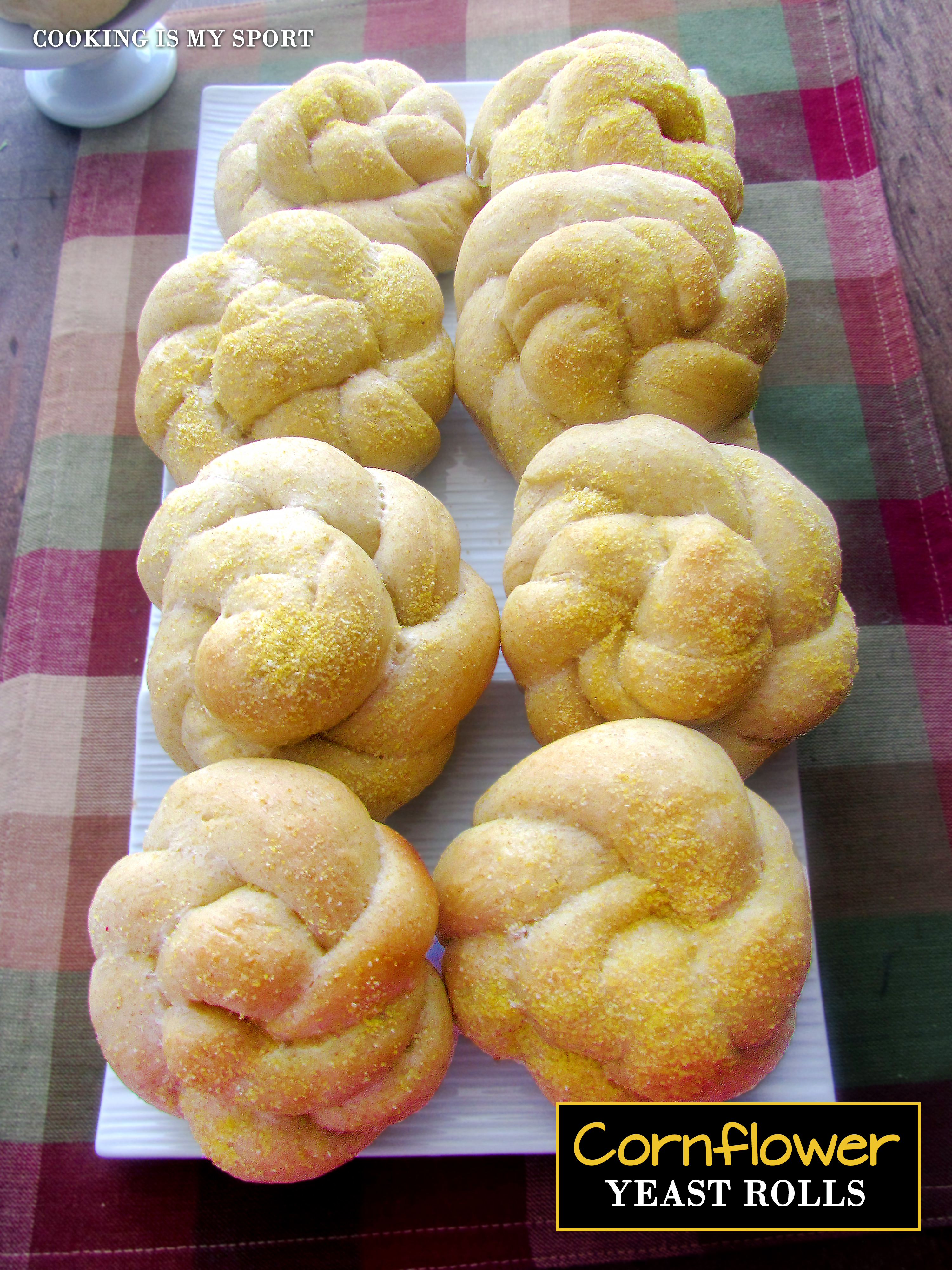 Well, the results are in. The first option was a Deep Cross Roll; I made individual balls of dough, cut deeply into them with a sharp knife with the intention that they would look like an inverted Hot Cross Bun without the white piped cross. (Fyi, it totally didn’t work, though I swear that it all made sense in my head at the time).

The second idea was for intricately woven cornmeal wreaths. These actually weren’t a complete flop. They did very strongly resemble wreaths, but I noticed that there was inconsistent proofing in the second rise so that some halves of the wreaths were bigger than the other half, which looked…weird and misshapen and not something I could manage to look pretty in a picture. Moving on. 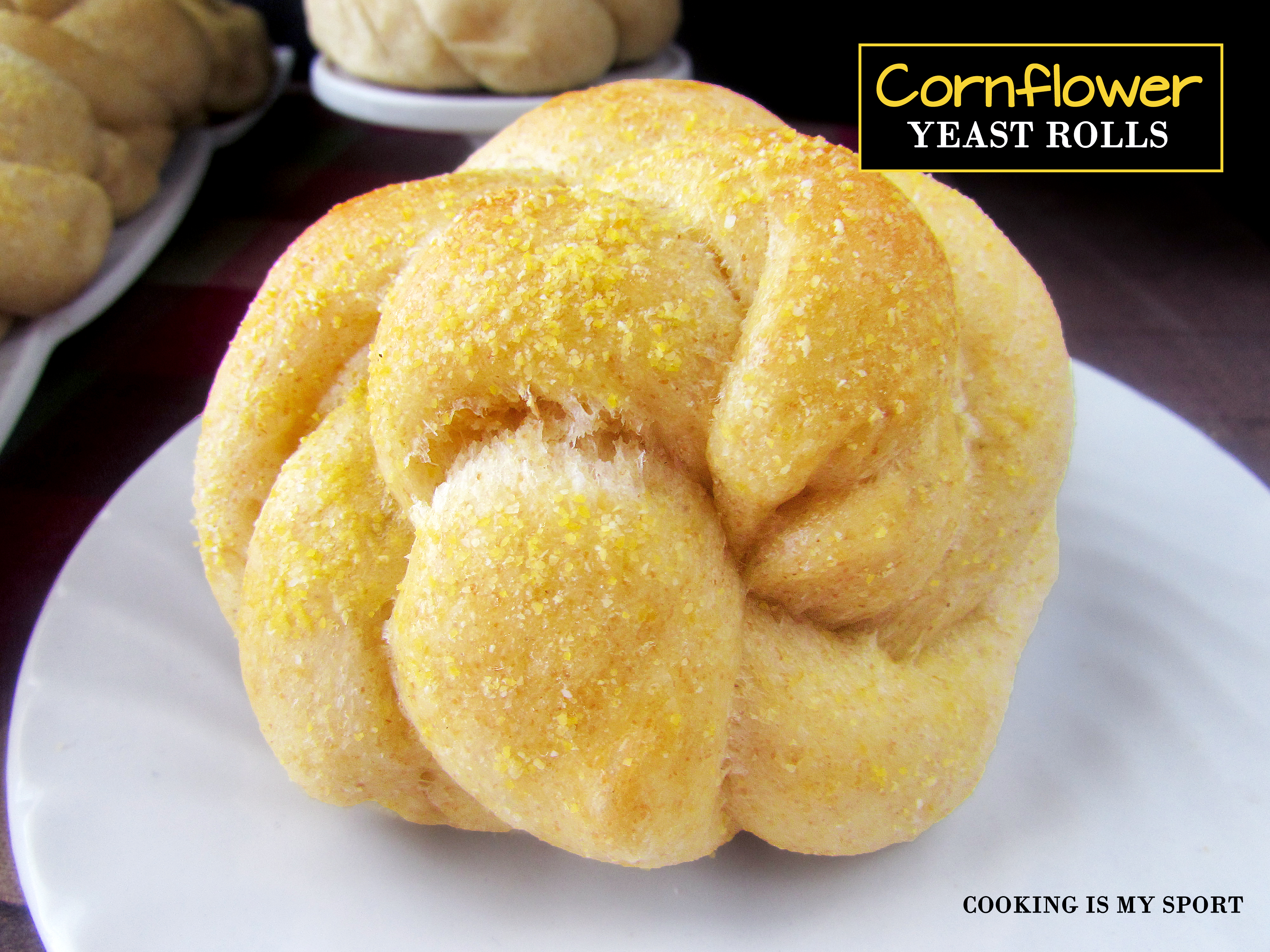 The third time really is the charm. My last idea was to take a technique similar to the one I’d done with the Pane di Pasqua I made for Easter, then do a little extra tucking and braiding to manipulate the individual bread rolls to resemble a kind of flower. It worked. Very well. I was a little concerned that they would go the way of their predecessors and resembled big indiscernible blobs of bread after baking, but t’was not the case.  These rolls proofed beautifully on the second rise and once they hit the hot oven, puffed up even more so that by the time they’re all finished they really DO look like complicated flowers of dough. The truth is, the technique is almost stupid easy so you get bragging rights on these without the extra drama that goes with complex baking projects. 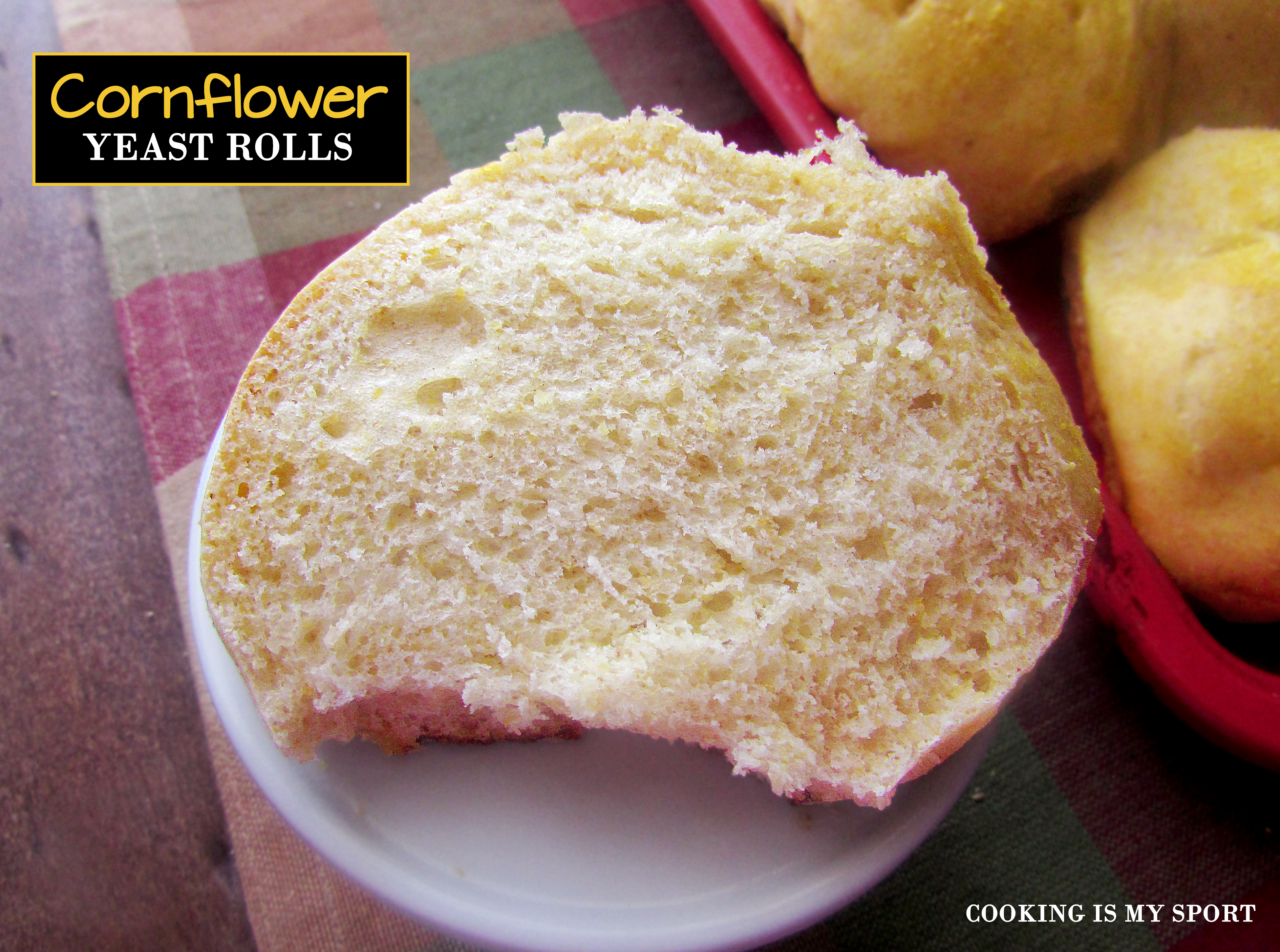 I tweaked the original concept for the recipe to what I think, are much better results. In the first place I kept with the new practice I’ve started of adding a single cup of whole wheat flour to my bread doughs in general. Guys, you really wouldn’t believe the difference this makes. As someone who prefers whole wheat bread, I certainly appreciate the addition of the whole wheat flour. Yet, even those who usually prefer white bread I think will STILL appreciate the subtle nutty flavor that it gives to the dough. What you get when you combine that nuttiness with the flavor of the cornmeal is something that has to be tried to be fully appreciated. The bread’s texture is soft and pillowy with just the right amount of chew. 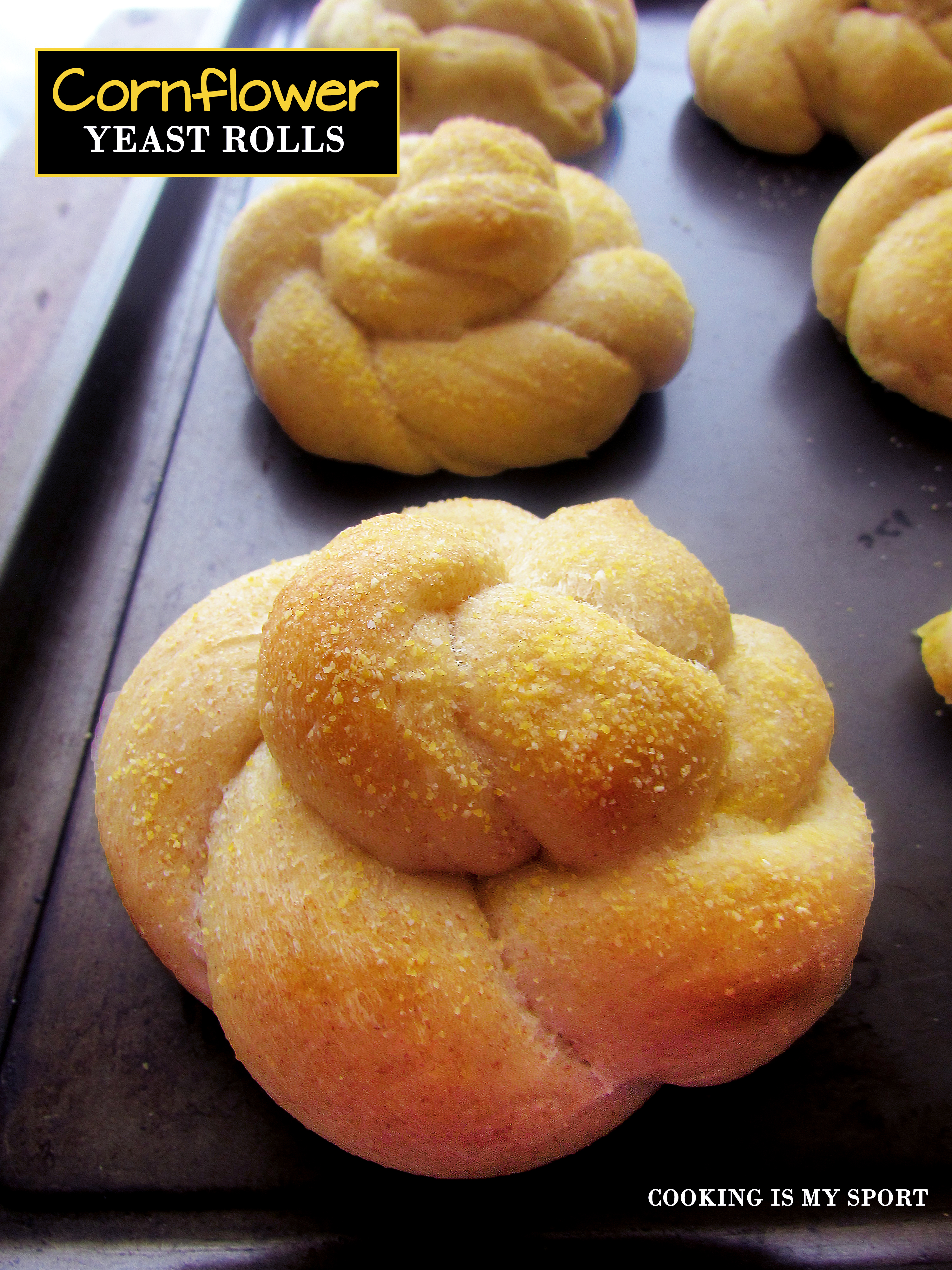 Don’t be intimidated by the shaping part of the dough. I know it may look fancy and complicated, but it isn’t. If you can wind two pieces of ribbon together, (loosely at that) then trust me: you can make these rolls. Seriously. Also don’t be worried if directly after you finish shaping them, they don’t look quite discernible as flowers. The second proofing and the baking in the oven will do the bulk of that work for you.

So, do these look similar to the actual blue cornflower flower? No. But I’m still going ahead and calling these Cornflower Yeast Rolls in a nod to that cornmeal flavor in the dough combined with the shape that I gave to them. KooKoo kachoo.

Taking myself and these rolls to this week’s Fiesta Friday #129, co-hosted this week by Jhuls @ The Not So Creative Cook and Colleen @ Faith, Hope, Love & Luck.

Combine the milk, cornmeal, butter or margarine, 1/2 cup sugar, and salt in medium saucepan. Warm over medium heat, stirring with a wooden spoon and allowing to cook until the mixture if slightly thickened. Add 1/2 cup water and mix well. Set aside to cool.

Soften active dry yeast in warm water (110 degrees F). Sprinkle the 1 tsp of sugar on top and allow to sit for 10 minutes or until yeast is frothy.

Combine cornmeal mixture, yeast, and 2 well-beaten eggs together in the bowl of a standing mixer, using the paddle attachment to combine together.

Then, using the dough hook attachment, add the cup of whole wheat  first, mixing to combine completely.  Add enough of the all purpose white flour to make a soft dough. It should be a smooth,pliable dough that no longer sticks to the sides of the bowl, but also not too dry.

Place the dough in another greased bowl, turning once to grease surface. Cover with a layer of plastic wrap, then a damp kitchen towel. Place in a warm place for about an hour.

When dough has doubled in size, remove from bowl and divide in half. Dive the halves in half.

Pinch off two dough balls about the size of ping pong balls and roll/shape them into logs. Pinch the top ends of both logs together, then braid them together.(This is going to take some patience. Have a small cup of water handy just in case your dough loses its moistness–it’s easier to roll out when it stays moist.Dip your fingers in the cup of water and rub a little bit of the water over the dough balls before you roll them out. Also, don’t worry about it if the ropes shrink a little bit after you roll them out; it’s not that big of a deal.)

Once the logs are braided, take the bottom end and roll it up (like a spring or a wheel), pinching the bottom end into the top one and tucking it under. Repeat with the remaining dough, placing the finished ‘flowers’ on a baking sheet lined with parchment paper.

Cover the finished flowers with plastic wrap, then a damp kitchen towel. Let rise in warm place or until doubled in size, about 1 hour.

Preheat the oven to 375 degrees F. Take the remaining egg and beat it in a small bowl with about a tablespoon of water. Brush the beaten egg over the proofed rolls and sprinkled with cornmeal.