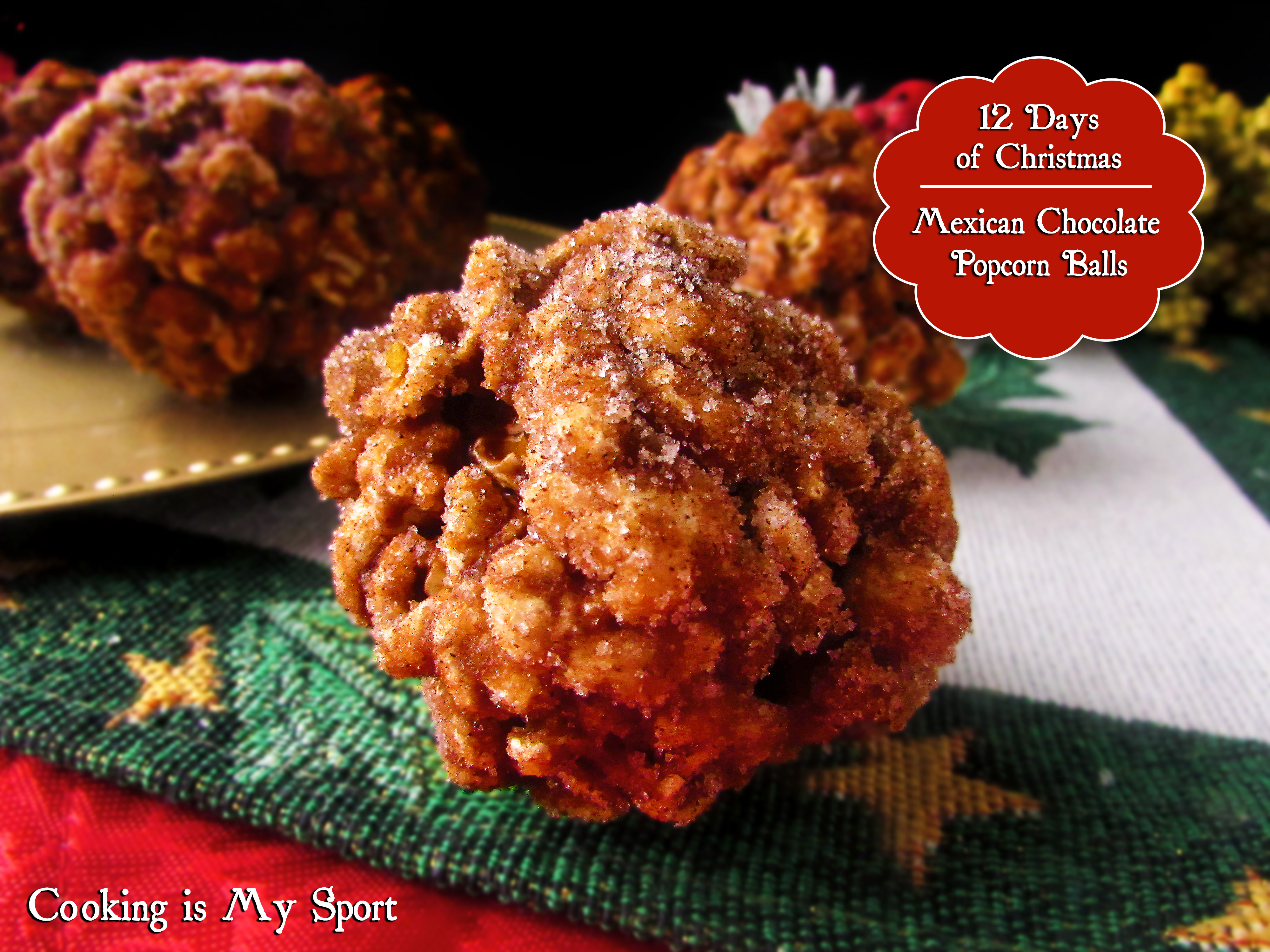 It’s Day 3 of the 12 Days of Christmas on the blog; I’m sitting listening to my Christmas playlist as I write this post and it’s making me think of a question I’ve wondered about for a while now:

Why is Rodgers and Hammerstein’s “My Favorite Things” considered a Christmas song/carol?

It’s not that I don’t like it. The Sound of Music is a pretty good musical and I’m a fan of the song in general..but I really doubt the writers were thinking of the Holiday as inspiration when they were putting it together. 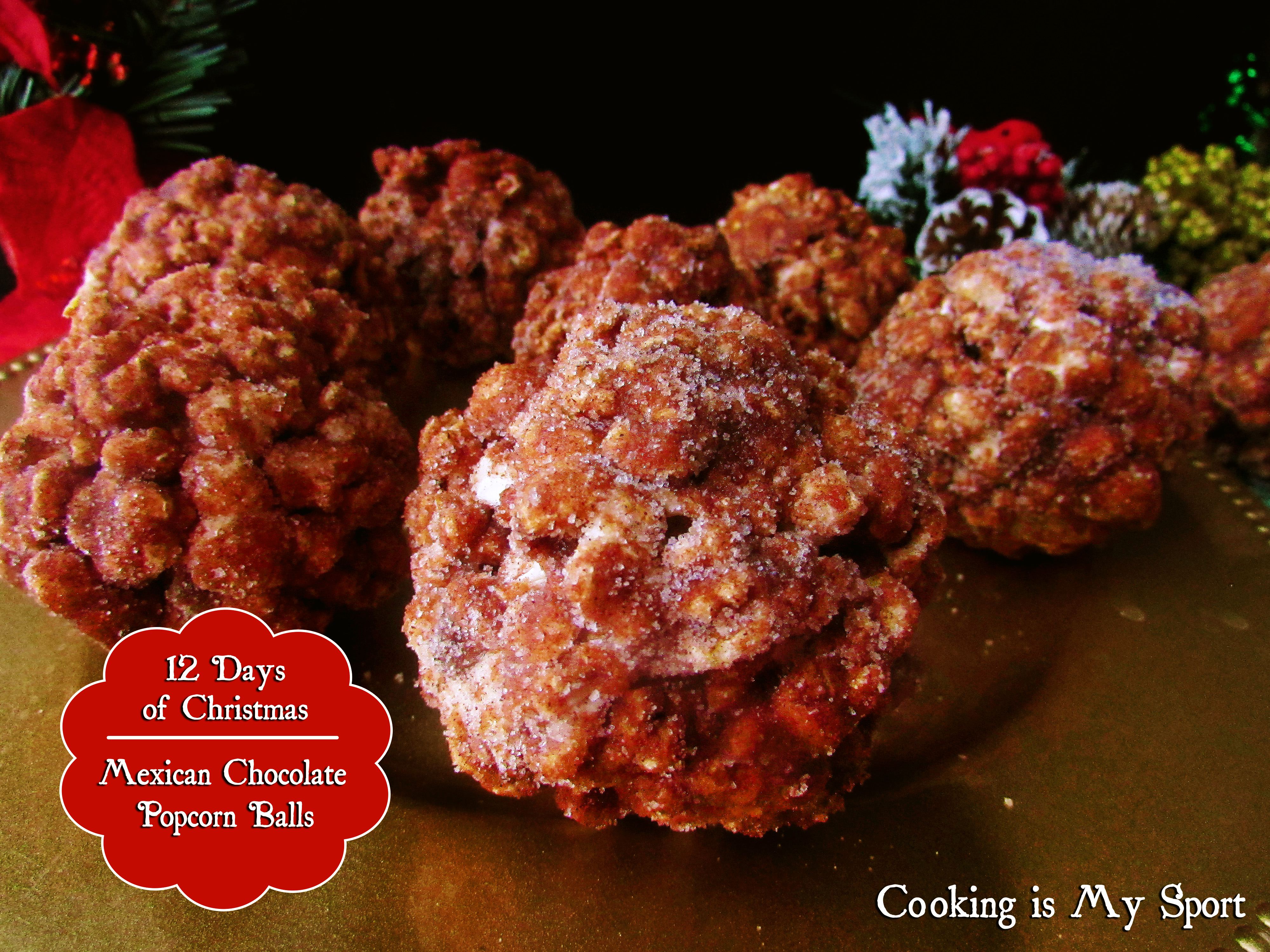 My more sentimental, sappy side assumes that because Christmastime is the best time of year, My Favorite Things is generally associated with it because at the very best time of year you start thinking about all of the things that you love the most.

Although I can’t think why the thoughts of “wild geese that fly with the moon on their wings” would suddenly make anyone feel better. Personally geese, ducks and the like freak me out. That could be because the geese and ducks on my university campus always chase people because over the years they’ve become too accustomed to parents taking their kids to the riverside to feed them bread. Therefore, they now think that all humans have a loaf of bread hidden somewhere on their person; they’ll chase you until you ‘give it up’. So yeah, geese are not one of my favorite things.

I’m thinking that Rodgers and Hammerstein just needed a word that rhymed with “things”, and that line is the best they could come up with. 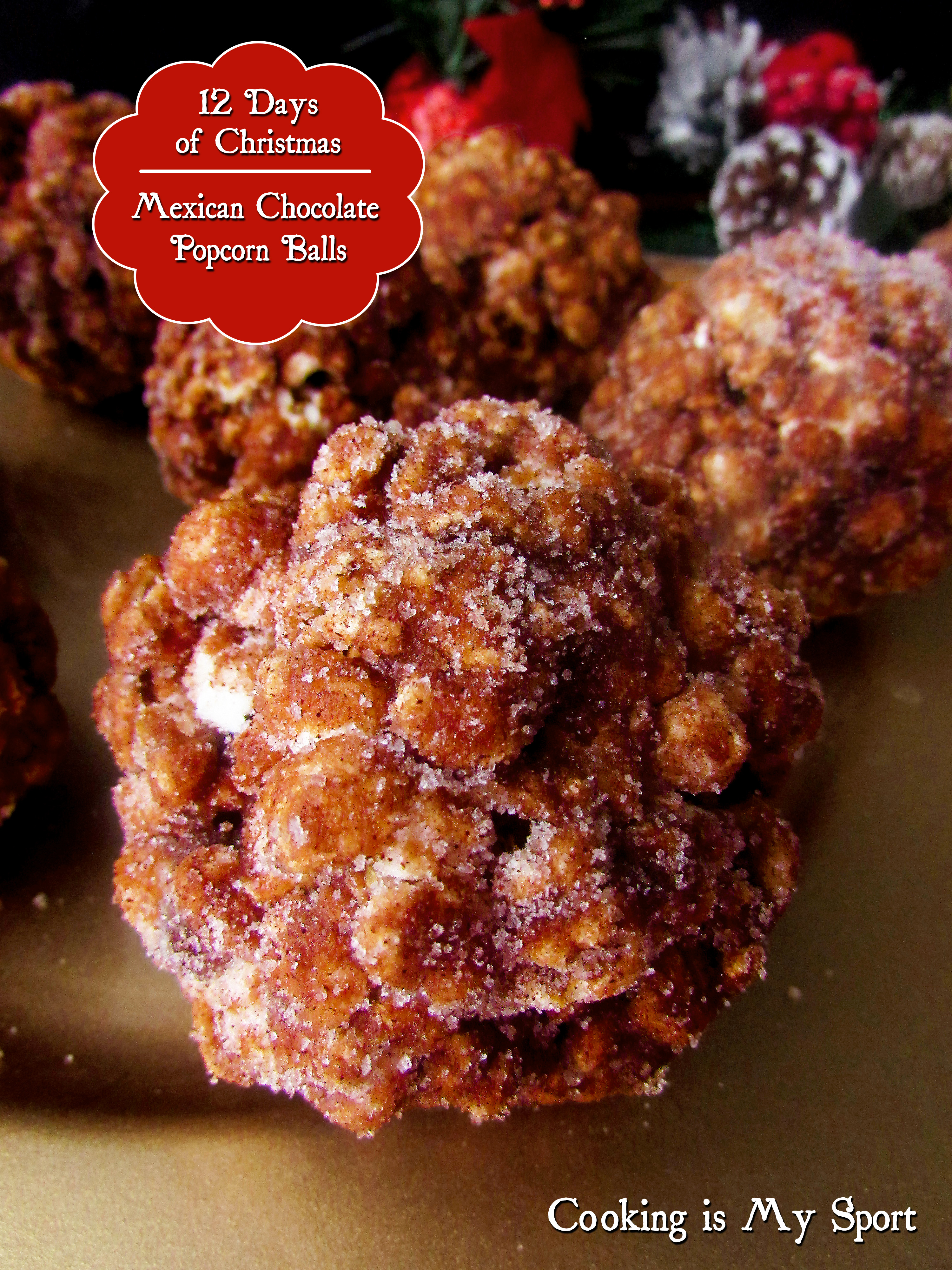 But whether they meant the song for Christmas or not, it DOES make you think of your favorite things. Heck, I’m starting to do it now. Maria von Trapp had nine, so I guess I can give nine of mine too:

Quiet mornings when the sky is bluish gray, but it’s not raining.

The A & E Pride and Prejudice movie.

Chris Hemsworth’s arms. And abs. And pecs. Basically his ‘everything’ (so that still should count as one, right?). 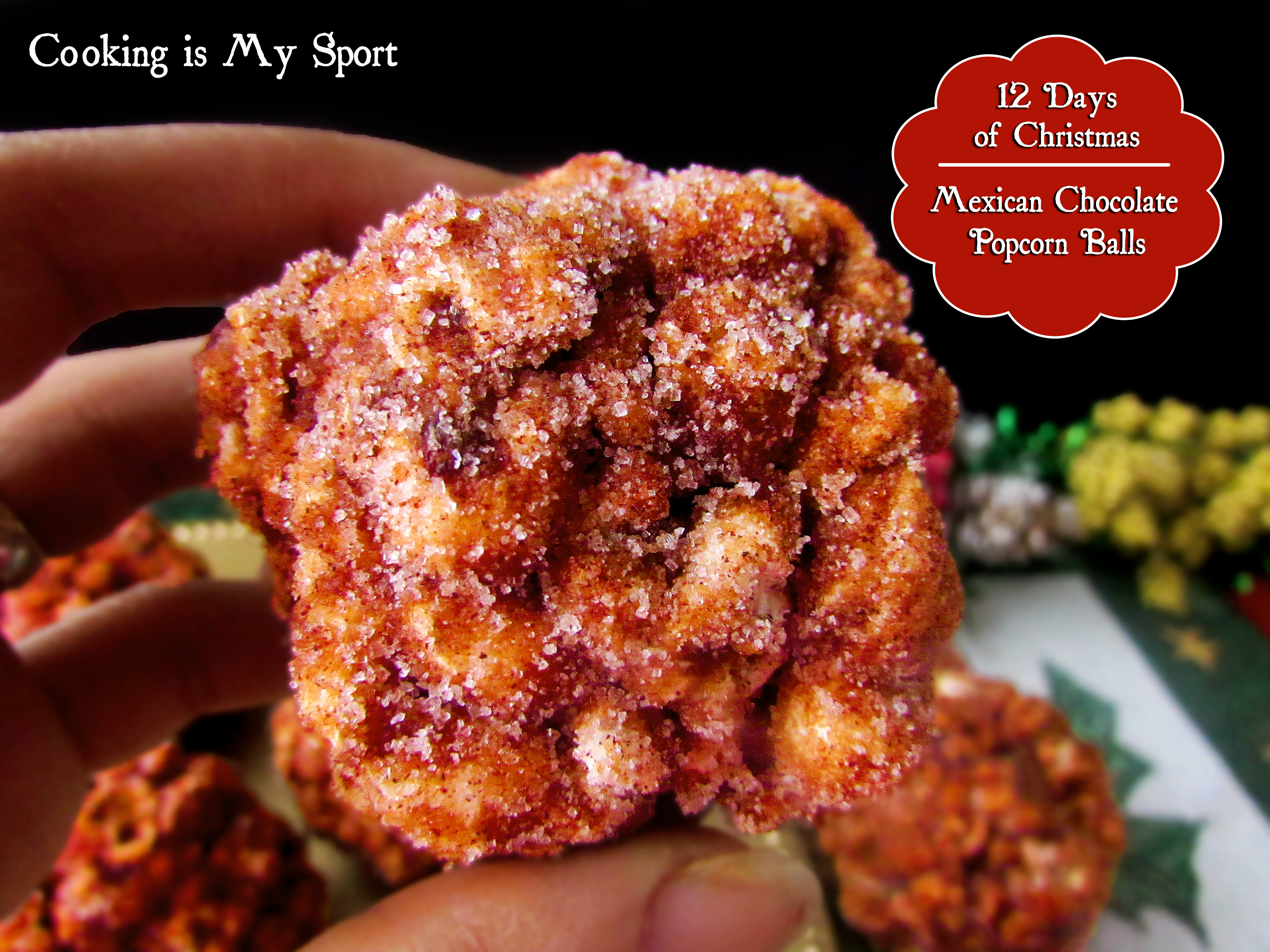 Cuddling with my baby niece.

The smell of freshly made bread in my kitchen.

My cookbook collection (it’s extensive and still growing, trust me.)

That’s nine, right? I notice that none of it rhymed with the word ‘things’. Gosh, now I’m starting to understand the inclusion of the whole “wild geese that fly with the moon on their wings” line. Song writing’s not all that easy. 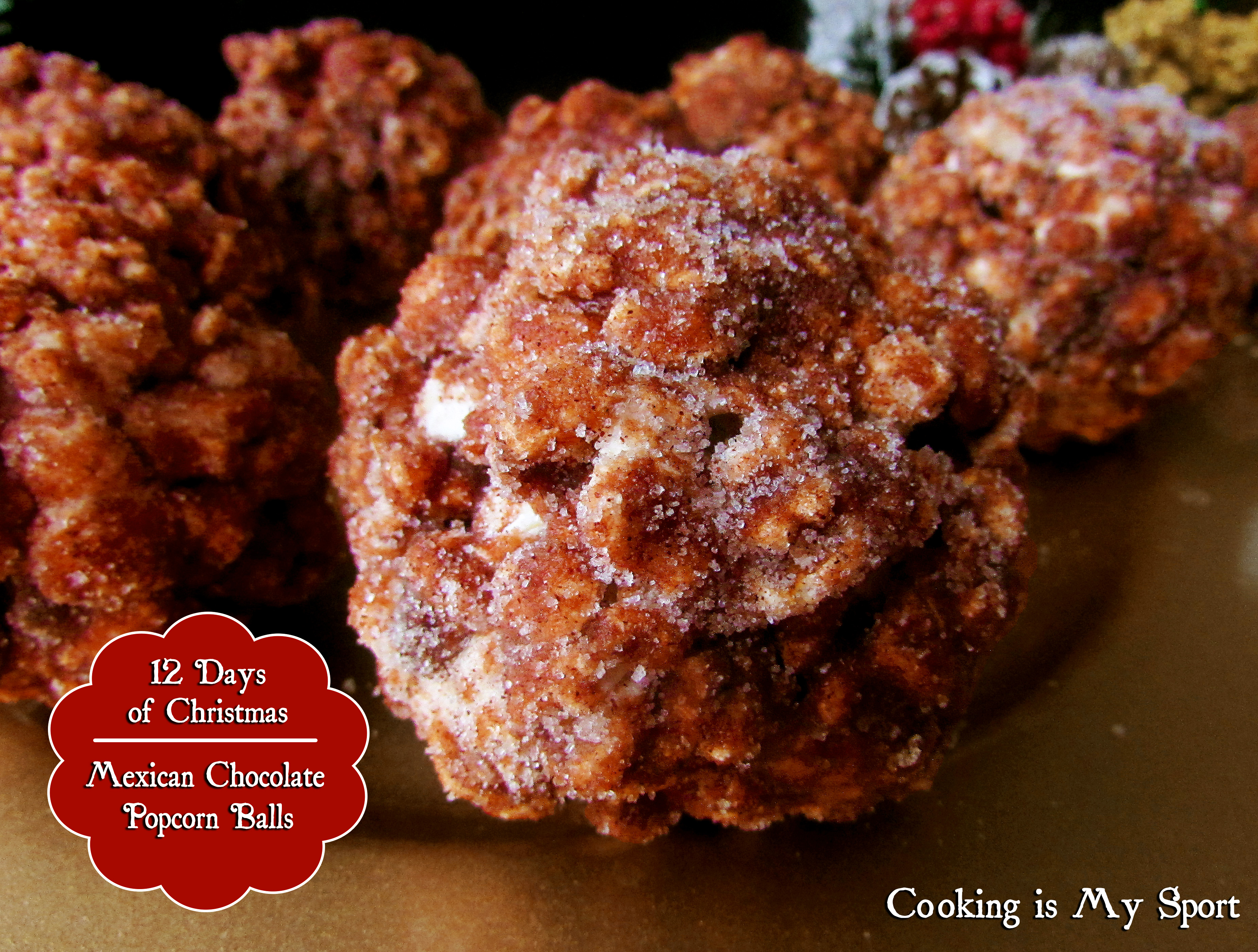 I made two popcorn balls for the series, the first of which was these Honey Roasted Peanut Popcorn Balls. The second was this recipe; I saw it in a Christmas issue of Food Network magazine a year or so ago and had it pegged for such an occasion as this. After I made my Champurrado (Mexican Hot Chocolate) a few weeks ago, I remembered that I had this clipping in my recipe box and immediately decided to try it out for the 12 Days of Christmas.

Guys… Chocolate. Marshmallows. Cinnamon sugar. The popcorn balls are doused and dipped in all of these, resulting in one of the yummiest, addictive treats I’ve ever made for Christmas. It’s sweet. It’s gooey. It’s chewy. It’s everything.

C’mon, just look at that sugary crust on the top: isn’t it just making you salivate?

Just a reminder: if you’ve missed the other recipes we’ve done so far in the series, I’m including a list of links to them below. Seeya guys tomorrow 🙂

2. Add 1 teaspoon vanilla and a pinch of salt.

4. Butter your hands, then shape into balls and roll in cinnamon sugar, working quickly before balls cool off. Place finished balls on parchment paper lined baking racks to set.