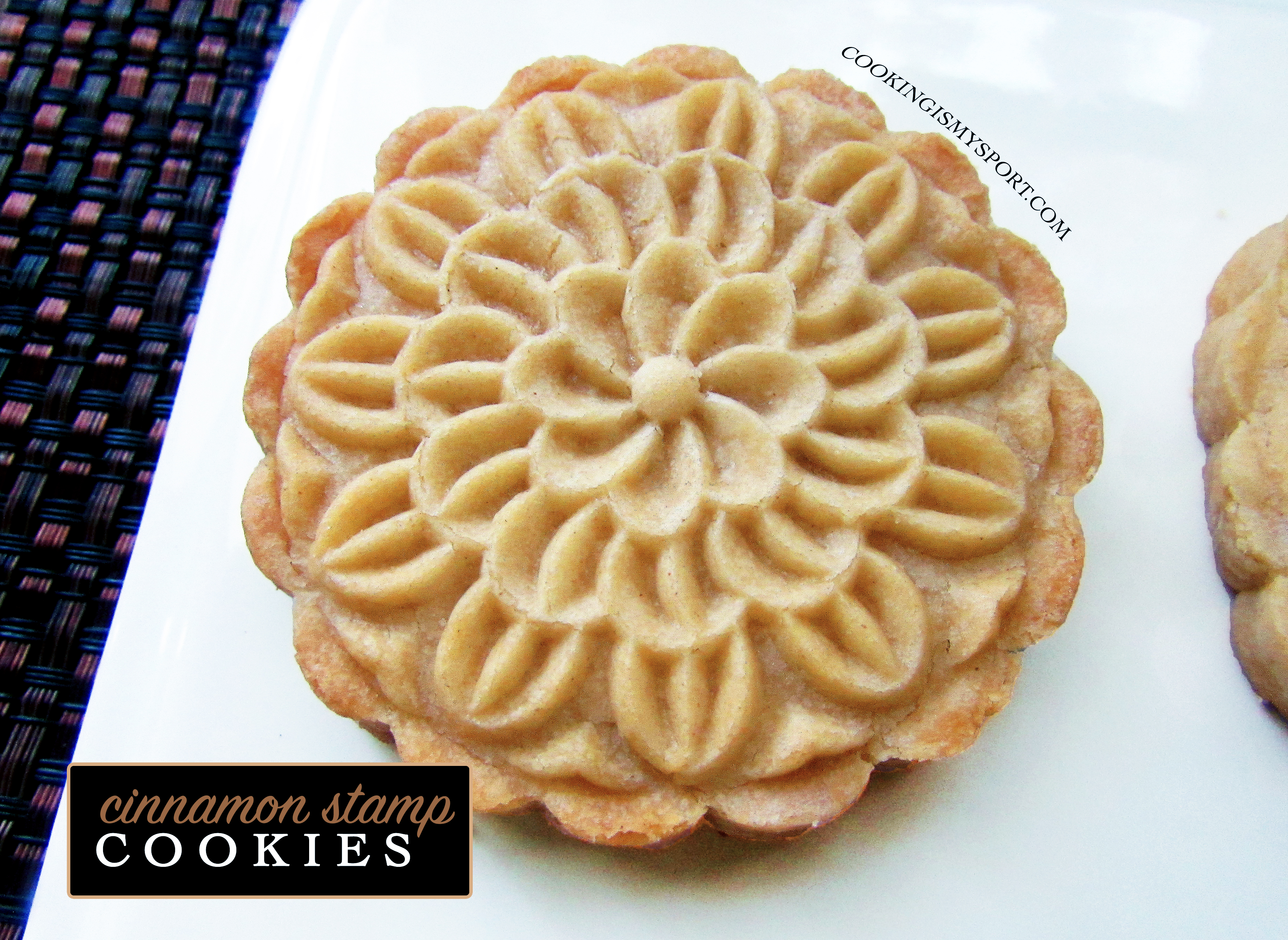 So, here’s a random but I think very useful tip for those of you who love to bake: the prettiest cookies do not have to come from cookie cutters, or cookie stamps.

At least, not most of them. I will say that certain springerle molds can make absolutely beautiful, unreal looking cookies. The problem with most springerle molds is that because they’re hand-crafted wood, they don’t run cheap. 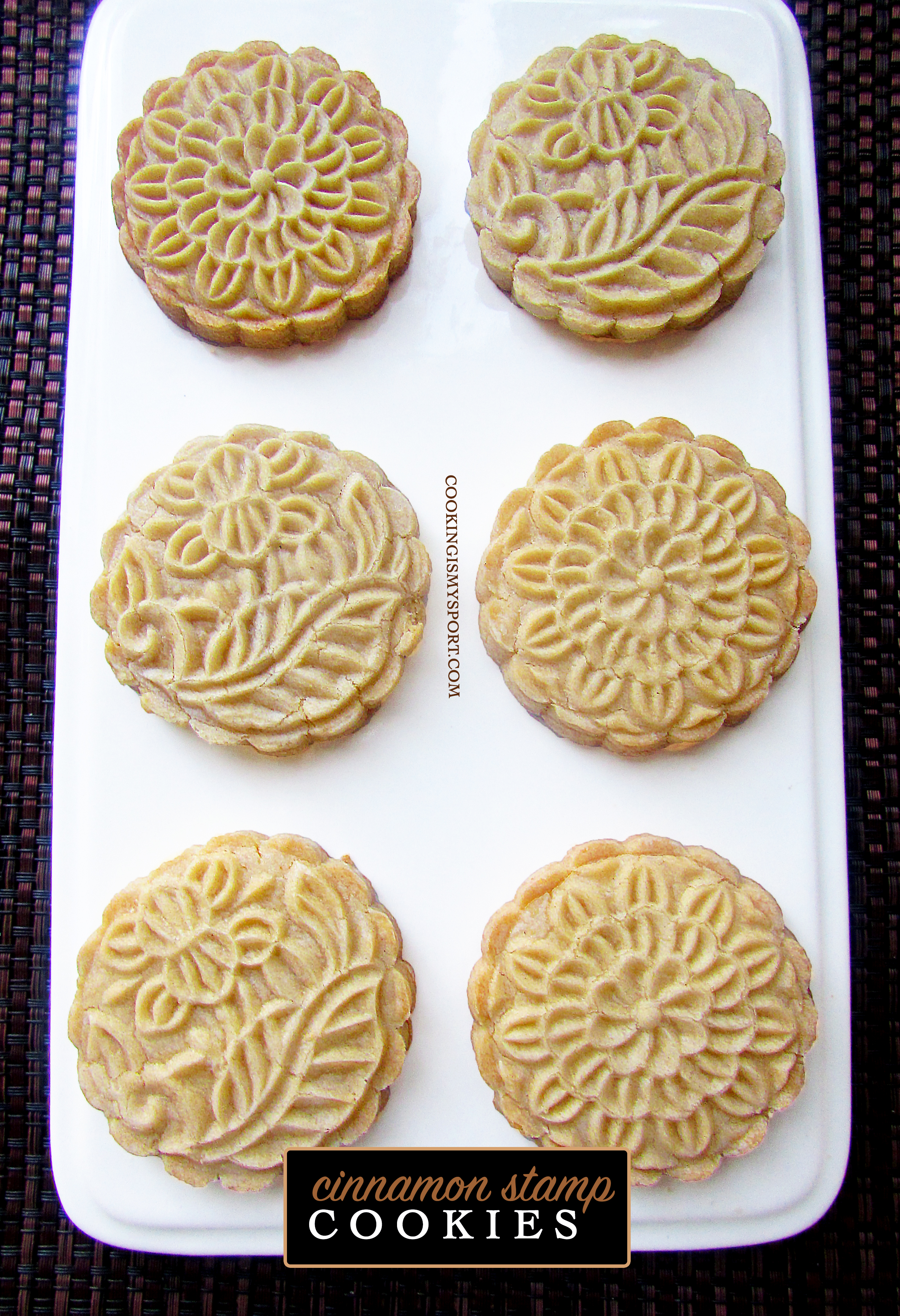 I got into collecting cookie stamps a little while ago and although I got some pretty nice ones, the designs weren’t as elaborate as the springerle molds, which was what I really wanted. Then one day, I was surfing the web for cookie stamps, and stumbled across something different. They were called moon cakes. Mooncakes are Chinese pastries that are typically eaten during the Mid-Autumn festival. I’ve never had one and had never heard of them until then; all I knew that the designs on top of them were beautiful. 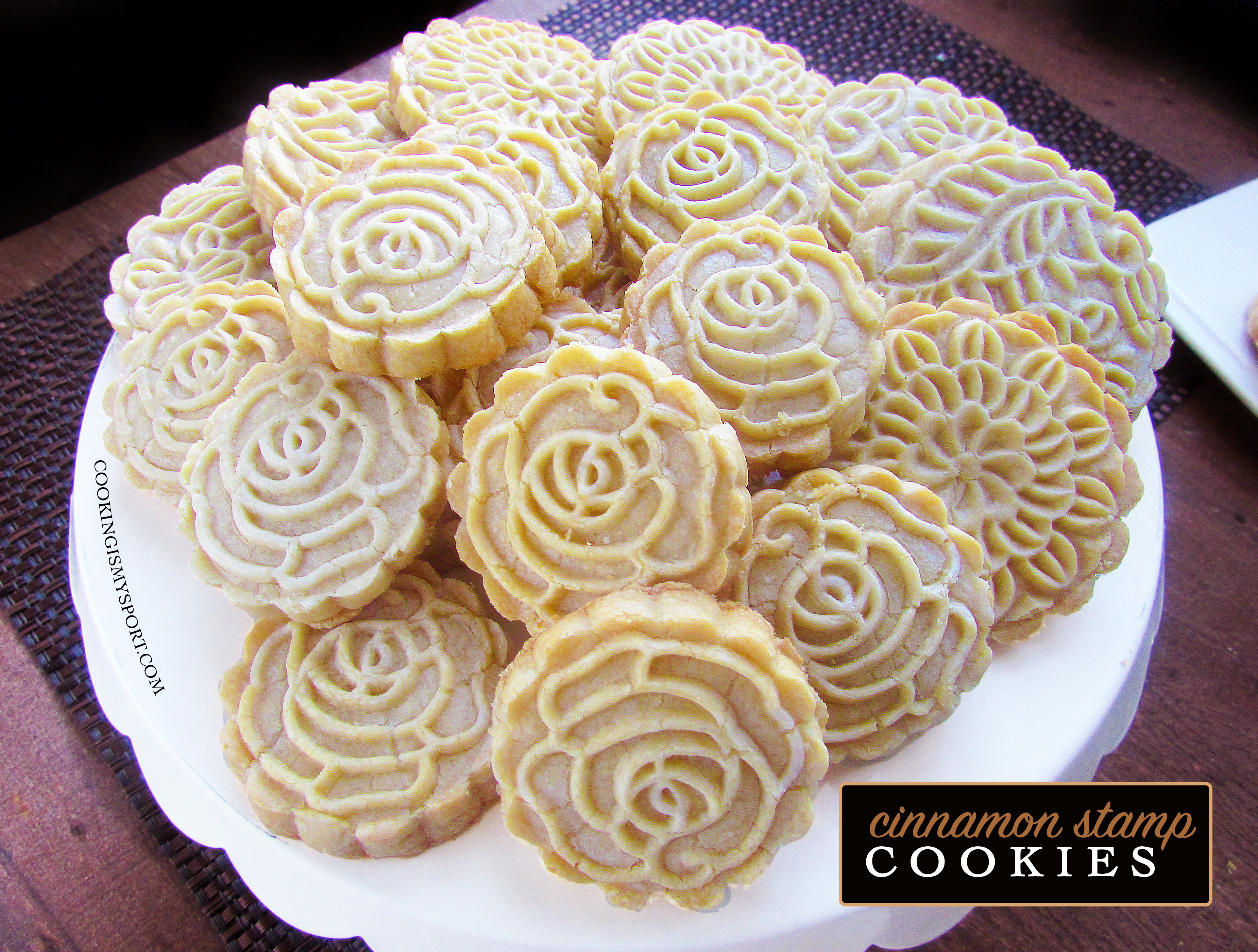 Traditional mooncakes are made with what’s called a mooncake mold. It’s a plunger like tool where the ball of filled pastry gets pressed into a shaped mold, then imprinted on top with the intricate design. After I’d done my quick Google search to learn how THAT was done, I then turned to the thought that aligned with my interest: would I be able to use the mooncake mold as a cookie stamp? 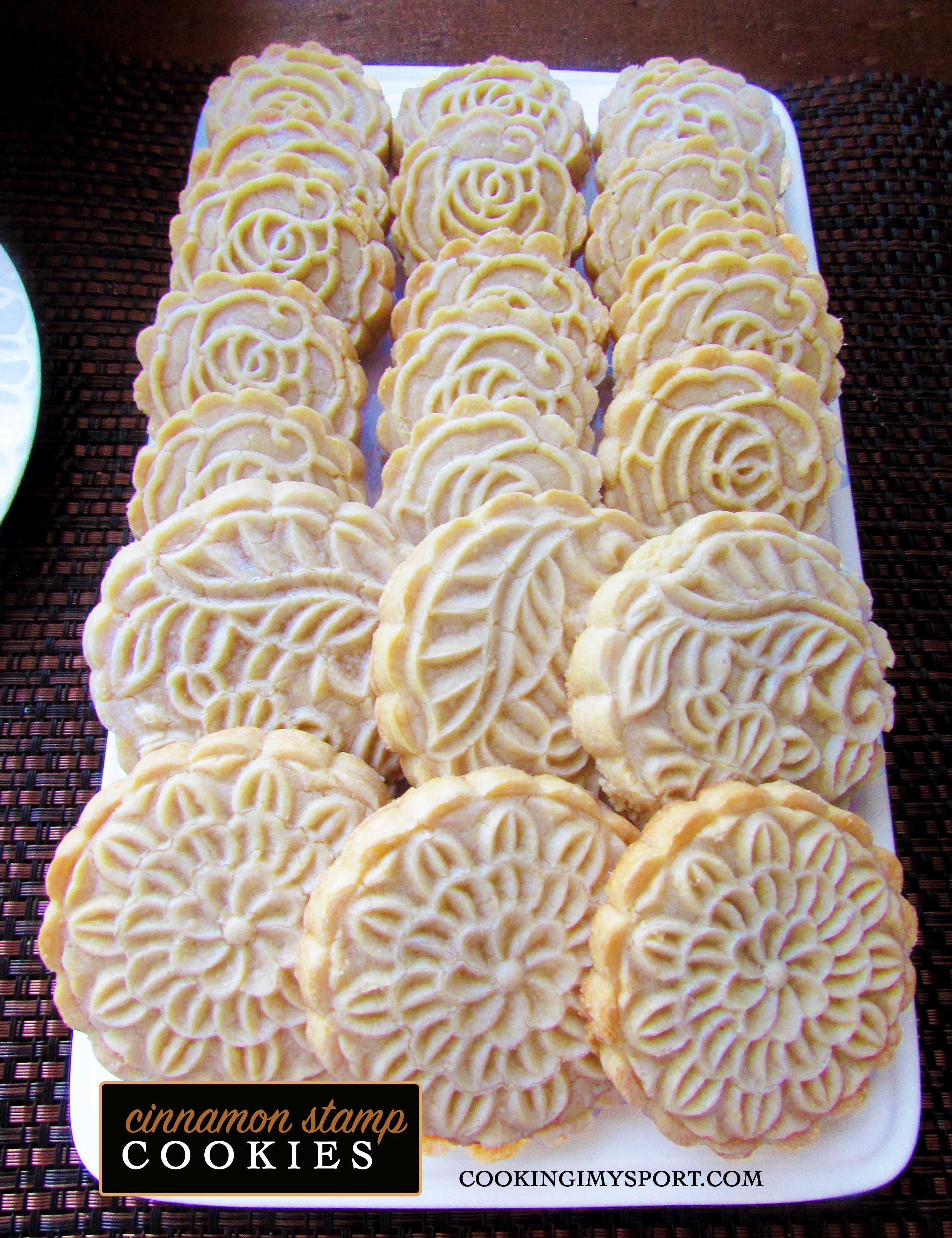 Since they were much, MUCH more cheaper than springerle molds, I decided to take a chance and ordered a set of mooncake molds to put my theory to the test. They came in a couple of days and within hours I was in the kitchen rolling out cookie dough. What do you y’all think? Was I right, or was I right? 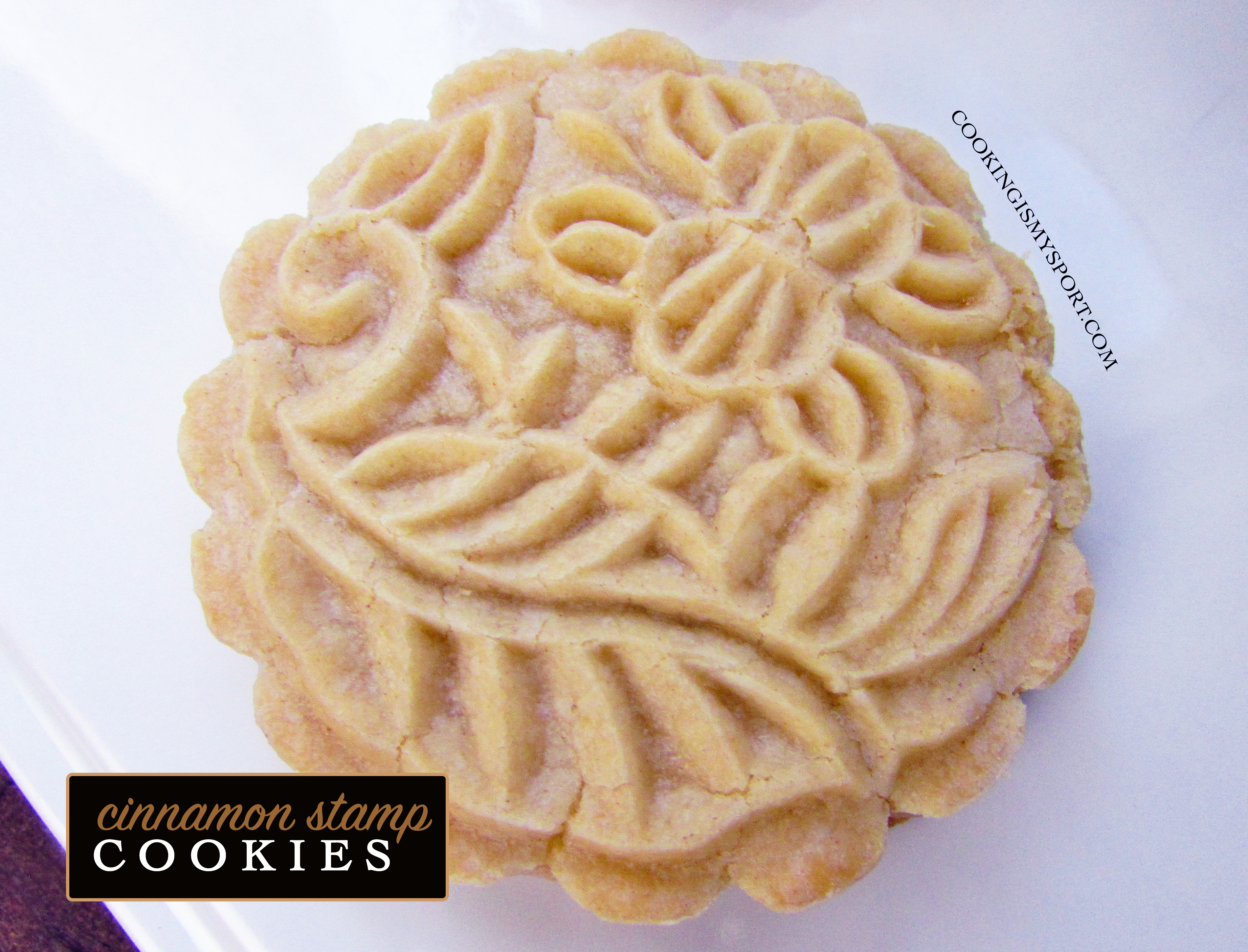 A couple of things: first, this is a recipe that can be made with ANY cookie stamp, mold or cutter you have. The dough is a basic butter cookie that is flavored with cinnamon and vanilla but you can always switch the flavors up to what you’re inclined towards. It bakes up crisp on the outside and tender on the inside–just as a butter cookie should be. Second, if this post has inspired you to buy and test out mooncake molds for yourself, I would recommend to always use a cookie dough that has been designated as a cut-out cookie recipe. There’s no point in going to the trouble of using the mold if the recipe is one that doesn’t hold it’s shape or design after baking.

In the bowl of a standing mixer or using a handheld one, beat together the butter and sugar until creamy and fluffy. Add the egg yolks one at a time, mixing just until combined and yellow disappears. Add the vanilla extract.

In a small bowl combine the flour with the cinnamon and salt, stirring together with a fork. Beat the flour mixture into the butter mixture in 1 cup increments, mixing just until combined.

Wrap cookie dough in plastic wrap, and refrigerate overnight, or at least for a few hours.

Line a sheet pan with parchment paper and lightly spray with cooking spray.

Roll dough out on a clean and floured surface to about 1/4 inch thick. Dip your cookie stamps into powdered sugar, then tap to remove excess. Press firmly into the dough. Use a slightly larger round cookie cutter to cut out shape, then transfer to cookie sheets. Repeat until you’ve used up all of the dough.*

Bake in the oven on the middle rack until just golden brown, about 9-12 minutes. Allow to set on sheets for about 60 seconds before removing to a wire rack to cool completely.

Linking to the Fiesta Friday #258, co-hosted this week by Laurena @ Life Diet Health.