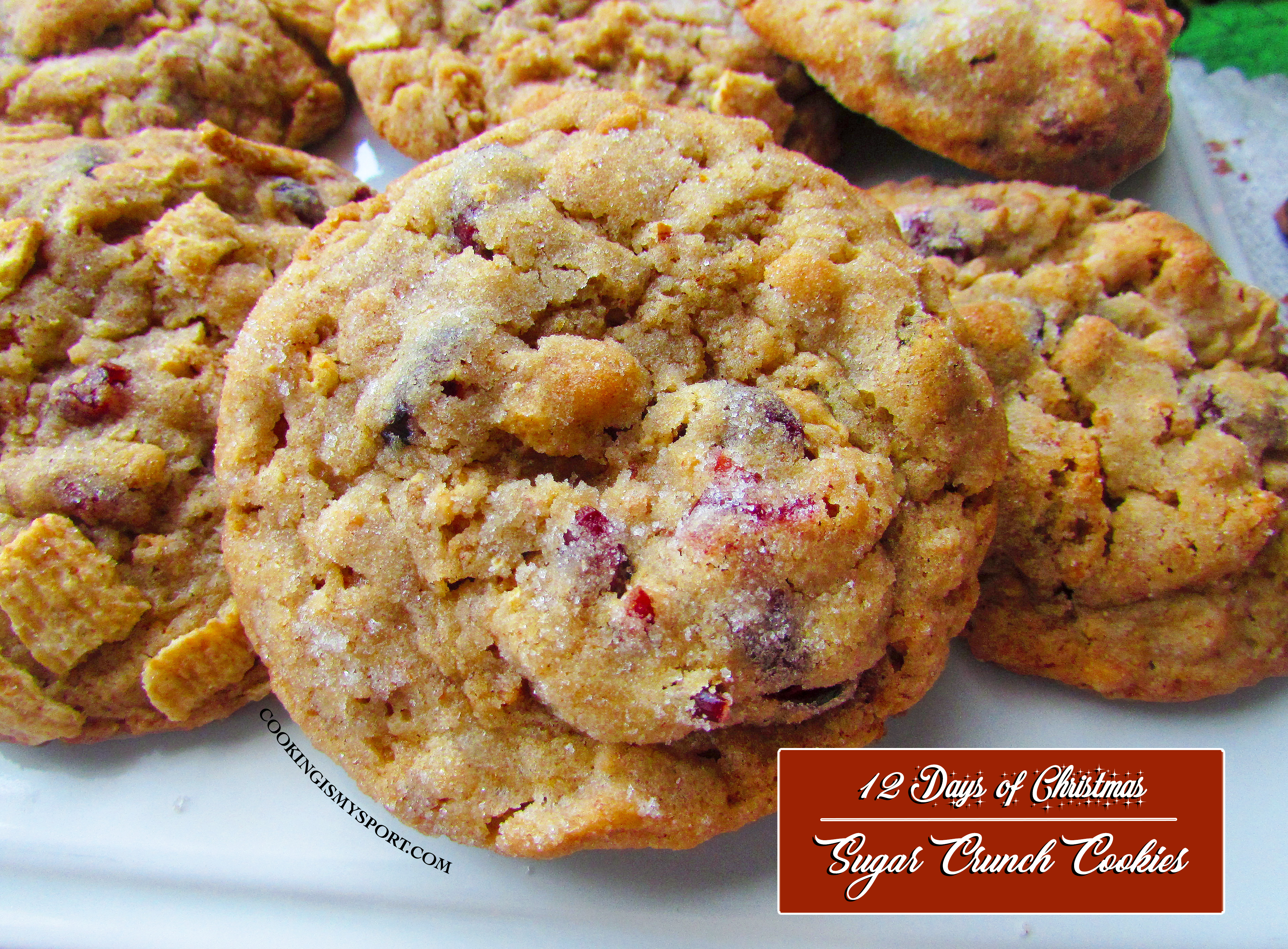 I want to take this opportunity today, on the 10th Day of Christmas to share a newfound Christmas miracle with all of you.

Every year, I look forward to when the ‘seasonal foods’ start popping up in the grocery stores–the ones that are only sold from about early November to early January. I’ve got some tried and true favorites, but this year I discovered a new one. 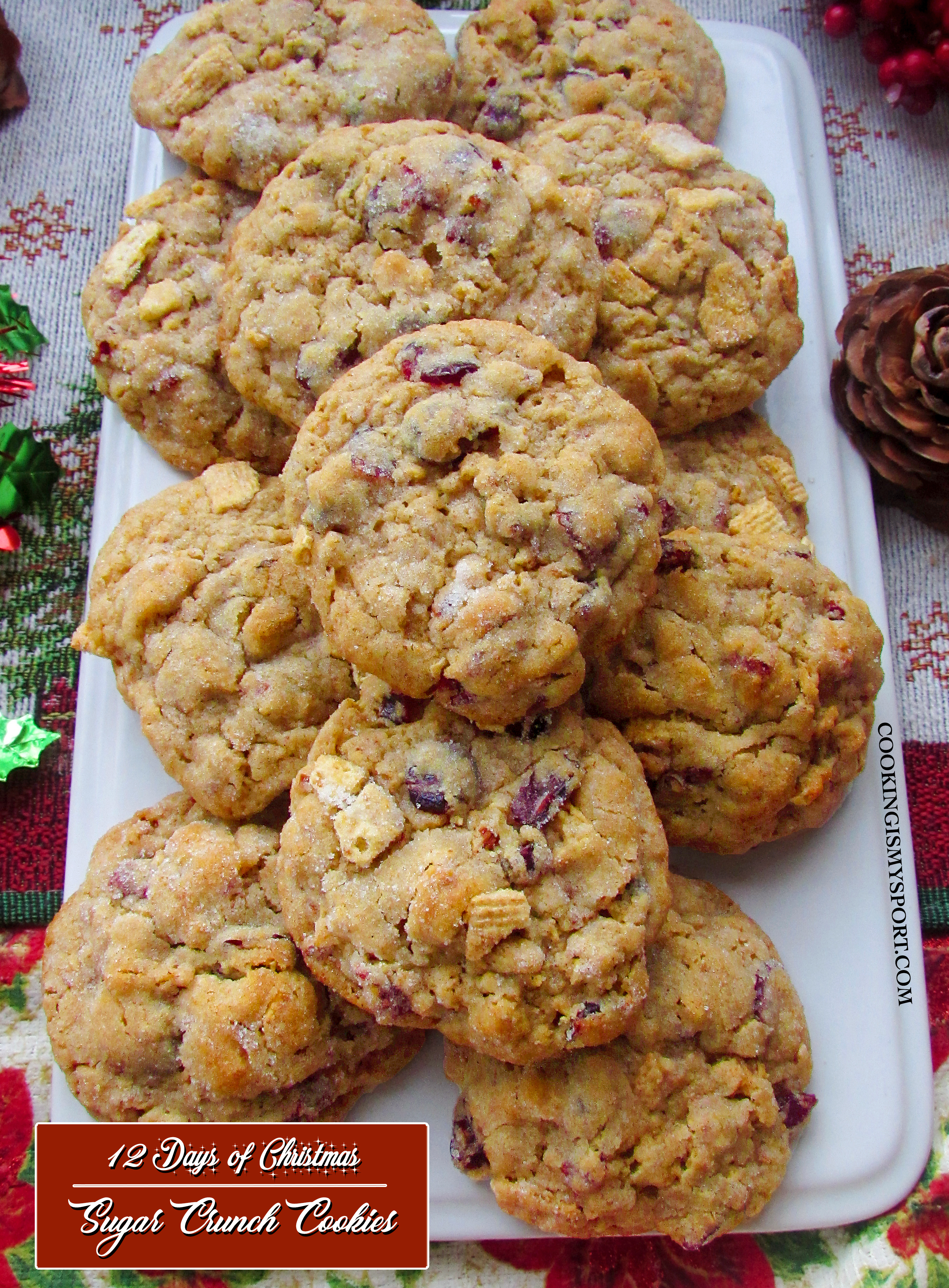 I know it’s the fan favorite, but even when I was a kid, Cinnamon Toast Crunch never really ‘did it’ for me. It’s just so, so SO sweet. Plus, there was something about the puffy texture of the cereal that I never liked. So I didn’t eat too much of it. Honey Bunches of Oats & Honey Nut Cheerios–that’s my kind of racket. However, I was in Target a little while ago on the cereal aisle and I happened to see a pretty red box of cereal with the following words written on it: 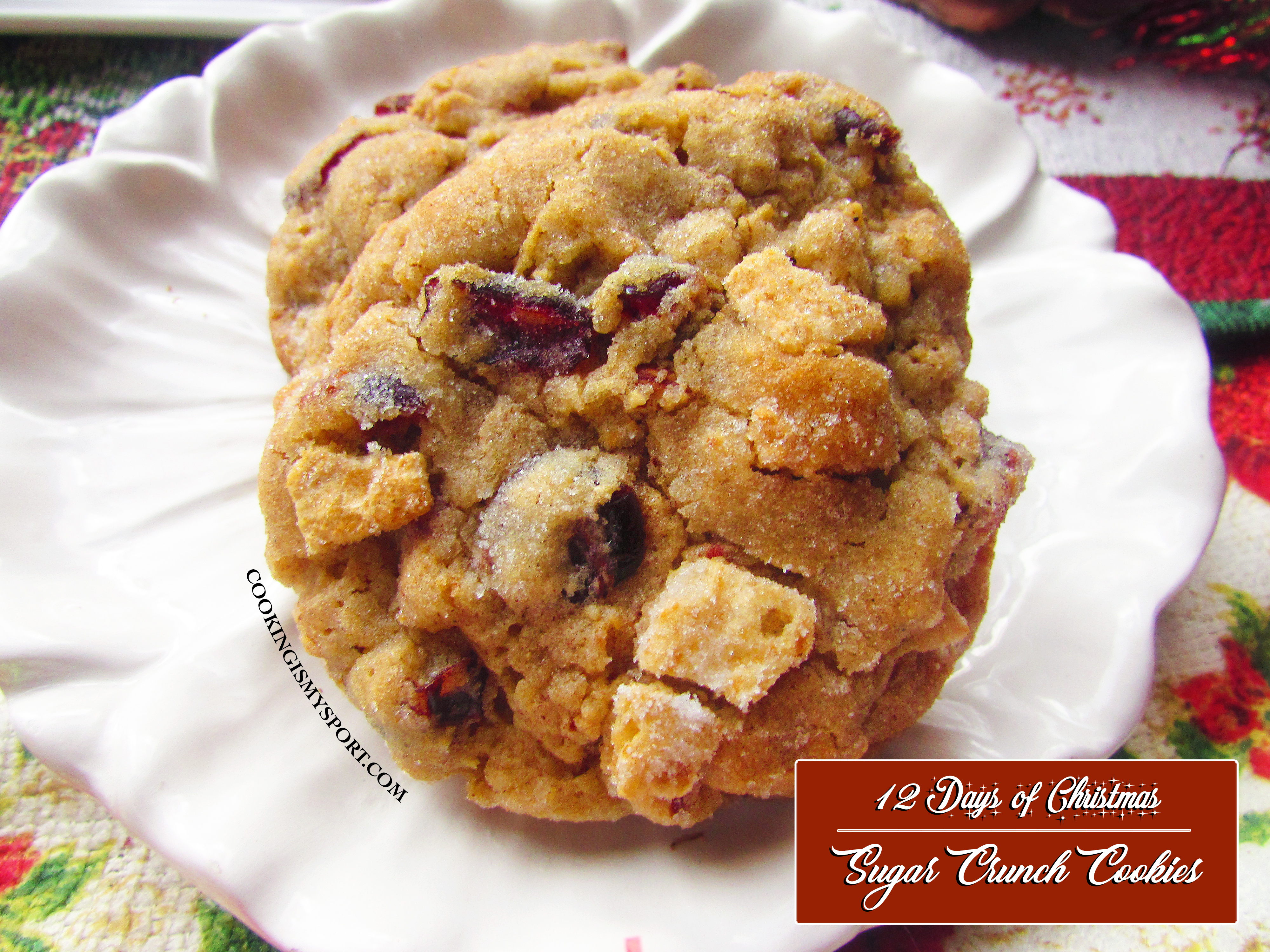 Now y’all know me. You KNOW how I am about sugar cookies. (I adore them.) I had to at least give this stuff a try, especially since it was a seasonal product and wouldn’t be around forever.

So the verdict is in and yeah, Sugar Cookie Toast Crunch is a bonafide Christmas miracle. Milk improves the taste of most cereals, but when it’s comes to those that are delicious eaten dry, this is the best one I’ve had since Waffle Crisp–and that’s saying a lot. It has that rich, vanilla flavor that every great sugar cookie has, but unlike it’s counterpart Cinnamon Toast Crunch, it isn’t overly sweet. The texture is also better. It’s a perfect toasty golden sugar cookie in cereal form. Yum. 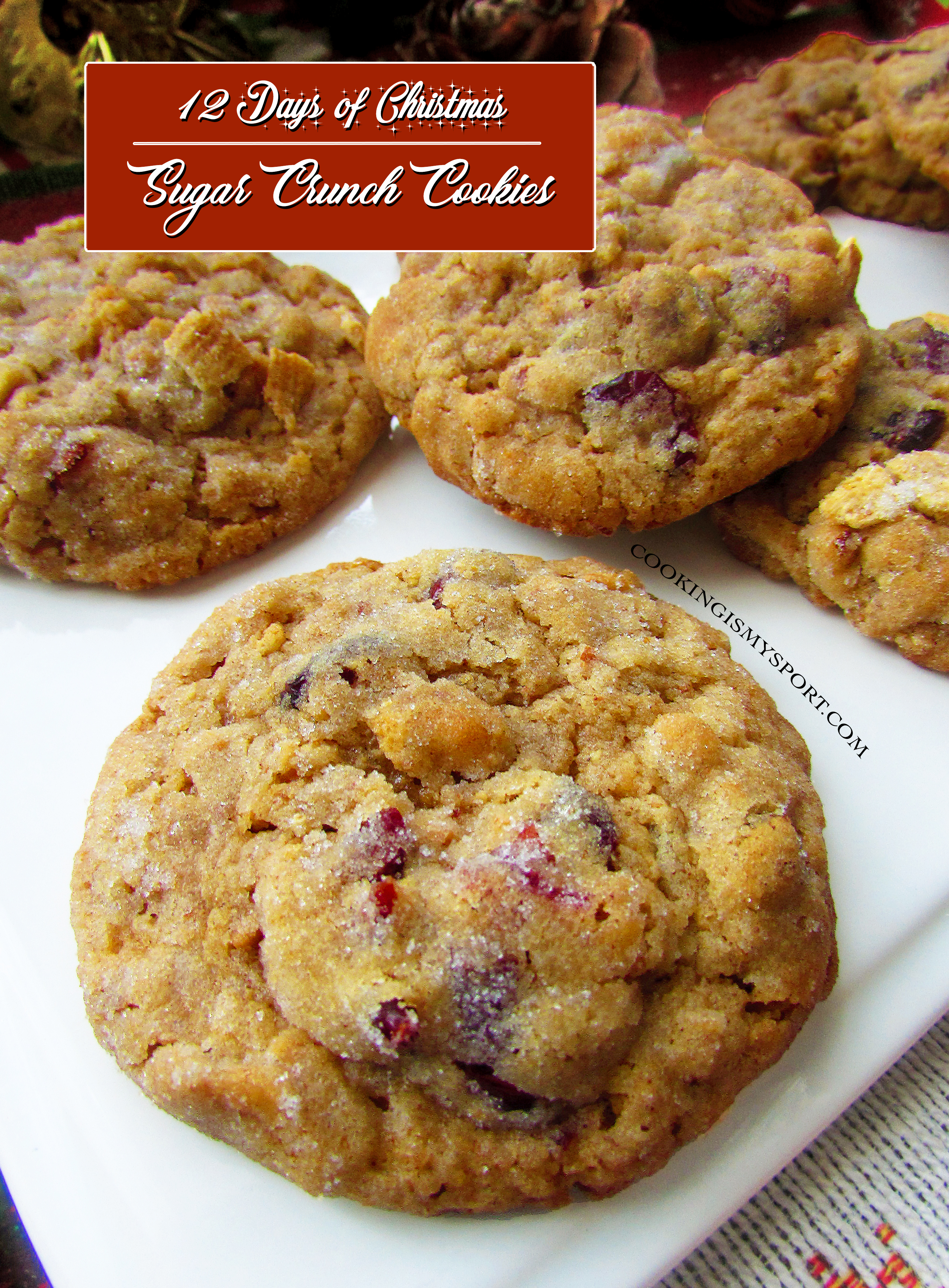 As delicious as SCTC is to eat on its own, my sister gave me the great idea that it would be an even better ingredient to try and bake with. I’ve seen a lot of recipes floating around the internet that use plain cornflakes, Fruity Pebbles or Golden Grahams and turn out great, so I decided to take inspiration from that to craft my own variation of a SCTC cereal holiday cookie for the 12 Days of Christmas. 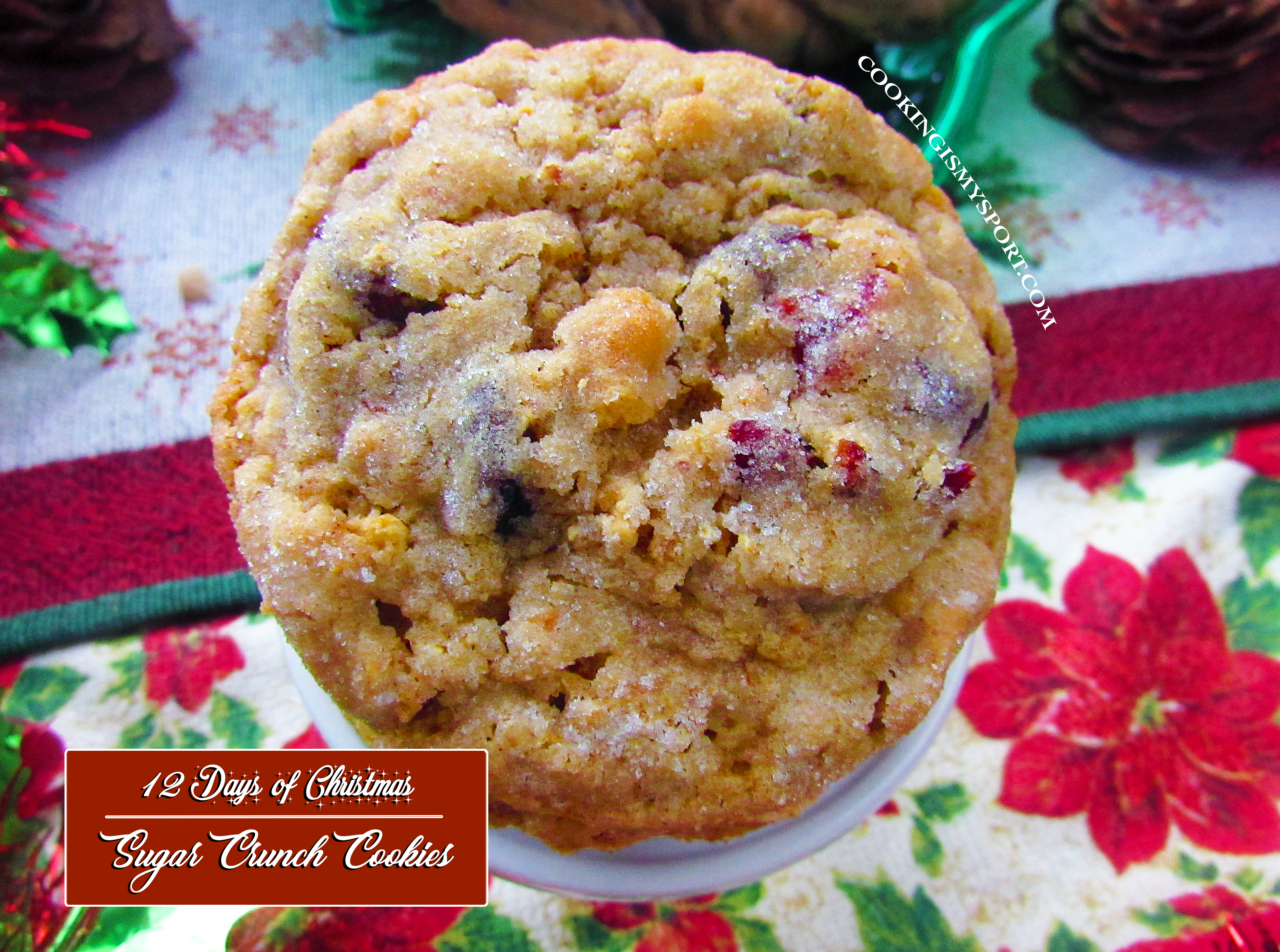 Here’s what’s in ’em. I used a blend of all purpose and almond flour as a base to the dough. The almond flour gives it a nutty flavor that I think tempers the sweetness nicely, but if you’re nut-allergic you should be able to use all regular flour with no problems. I also added some dried cranberries to the dough for two reasons: I wanted to give some extra texture to the cookie, and I wanted to give a pop of tartness that I also think works well with the sweetness. 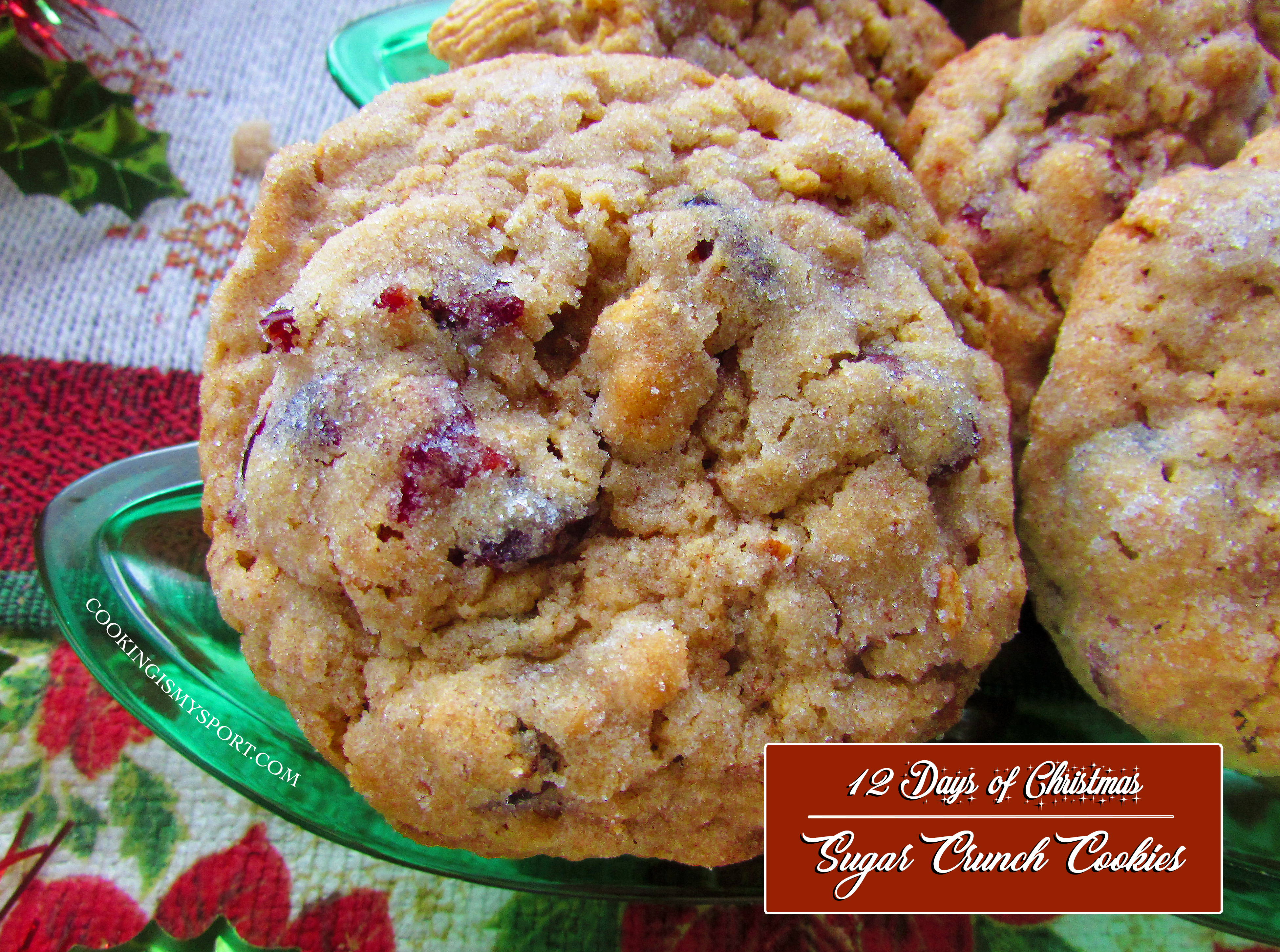 Un-chilled dough tends to result in cookies that spread a lot and so, after mixing crushed SCTC into the dough, I let it rest in the fridge overnight. I highly recommend that you do this in order to achieve the puffy round shape that you see in the pictures.  Aren’t they pretty, y’all? I think what I like most about these apart from the flavors is the texture–they’re soft and chewy, also yet crunchy from the cereal. They’re sweet from the cereal, but also toasty from the almond flour with that tang of tartness from the cranberries. It’s like the best Christmas compost cookie ever.

Just 2 days left of the 12 Days of Christmas! There’s still plenty of time to bake for the holidays, so feel free to check out the other recipes if you haven’t already.

In a medium size bowl combine the flour with the almond flour, baking powder and salt. Set aside.

Scrape the dough into a sealable container and refrigerate for at least one hour, preferably overnight.

Preheat the oven to 375 degrees F. Line a sheet pan with parchment paper. Pour the remaining 1 cup of crushed cereal in a small bowl.

Use a 1/8 scoop (that’s about 2 tablespoons) to scoop out balls of dough. Roll each dough ball in the crushed cereal until it has a light coating. Place onto the parchment paper, about 1/2 inch apart. Press down a little on the tops to lightly flatten. Sprinkle the tops with cinnamon sugar.

Bake the cookies until light golden brown and puffy, 12 to 15 minutes. Allow to set for about 5 minutes before removing to a wire rack to cool completely.

Sharing at this week’s Fiesta Friday #255, co-hosted this week by Jhuls @ The Not So Creative Cook and Diann @ Of Goats and Greens.