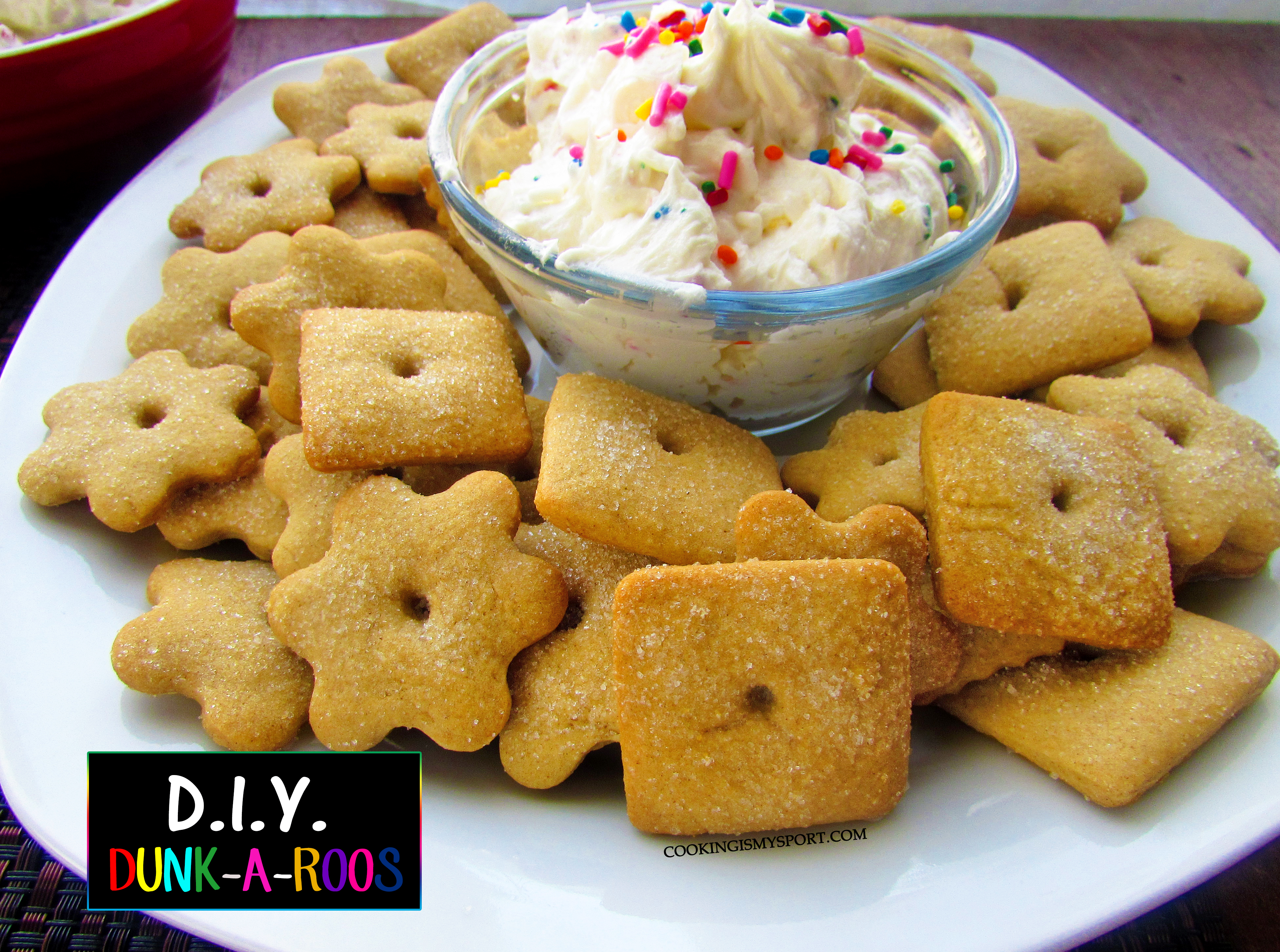 Alright. Allow me to set the scene for y’all.

Picture it. Michigan, 1996. I was in elementary school. My mom hadn’t given me the option yet of choosing to eat a ‘Hot’ lunch that the school provided. For a while, we were sent to school with ‘Cold’ (Packed) lunches from home. On one hand I was annoyed that I didn’t get to eat the food that most kids love. On the other hand…I got to bring along snacks from home to eat at lunch that weren’t served in school.

One of those snacks served as the inspiration for today’s post. I’m quite sure that a few of you will know exactly which one it was, as it was as treasured part of your childhoods as it was mine. 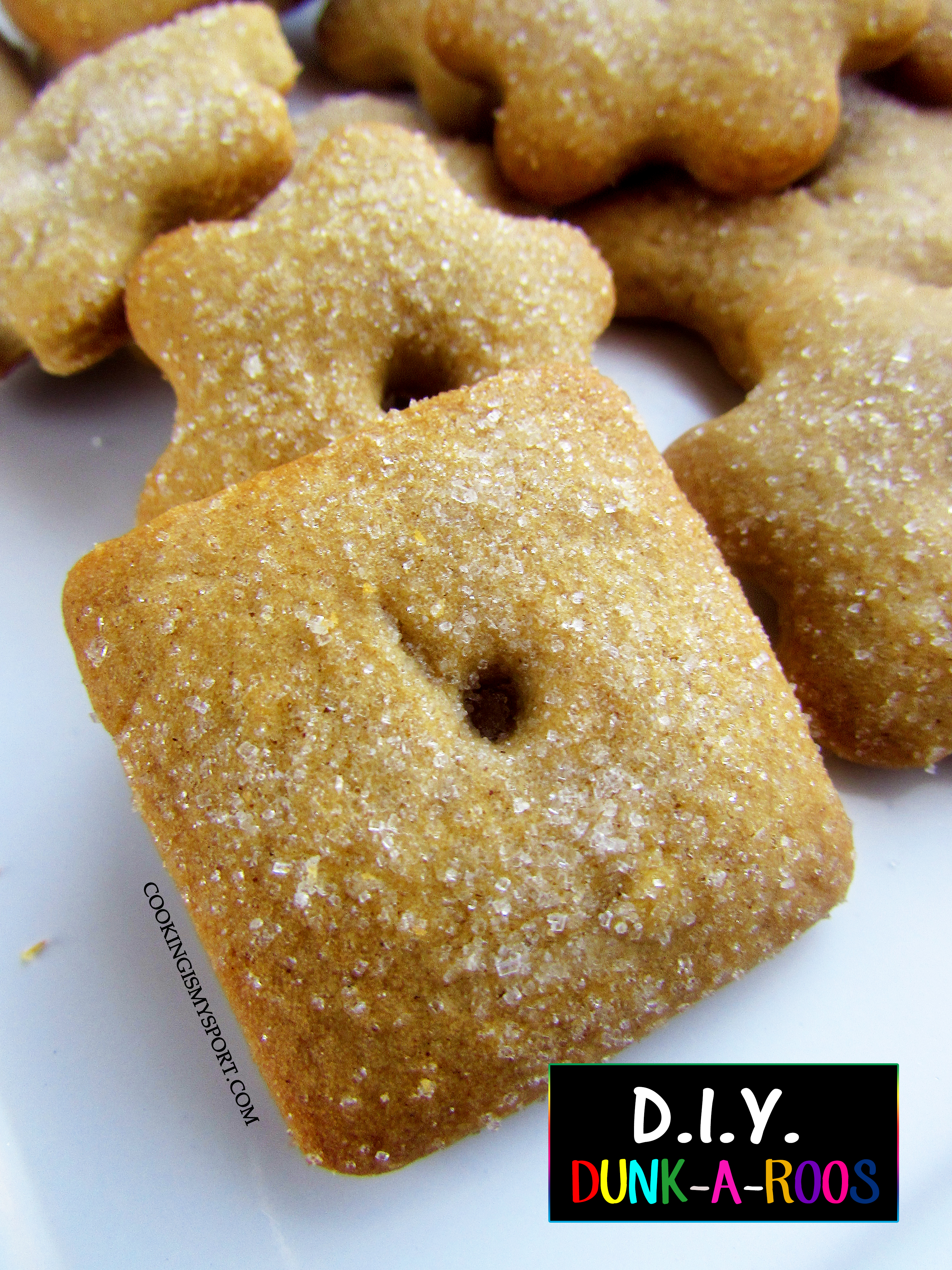 Dunk. A. Rooooooooos, y’all. Those that know, *know* why I just had to say it again. For those that don’t, I’ll press pause and give some background info.

Dunk A Roos are a snack food; when they were first released it the early 90’s, they were small crisp vanilla flavored cookies that came with a few scoops of sweet white funfetti dip that you could DUNK them in. (Get it? DUNK-a roos.) Later on when they became more and more popular the company started making chocolate flavored ones too. 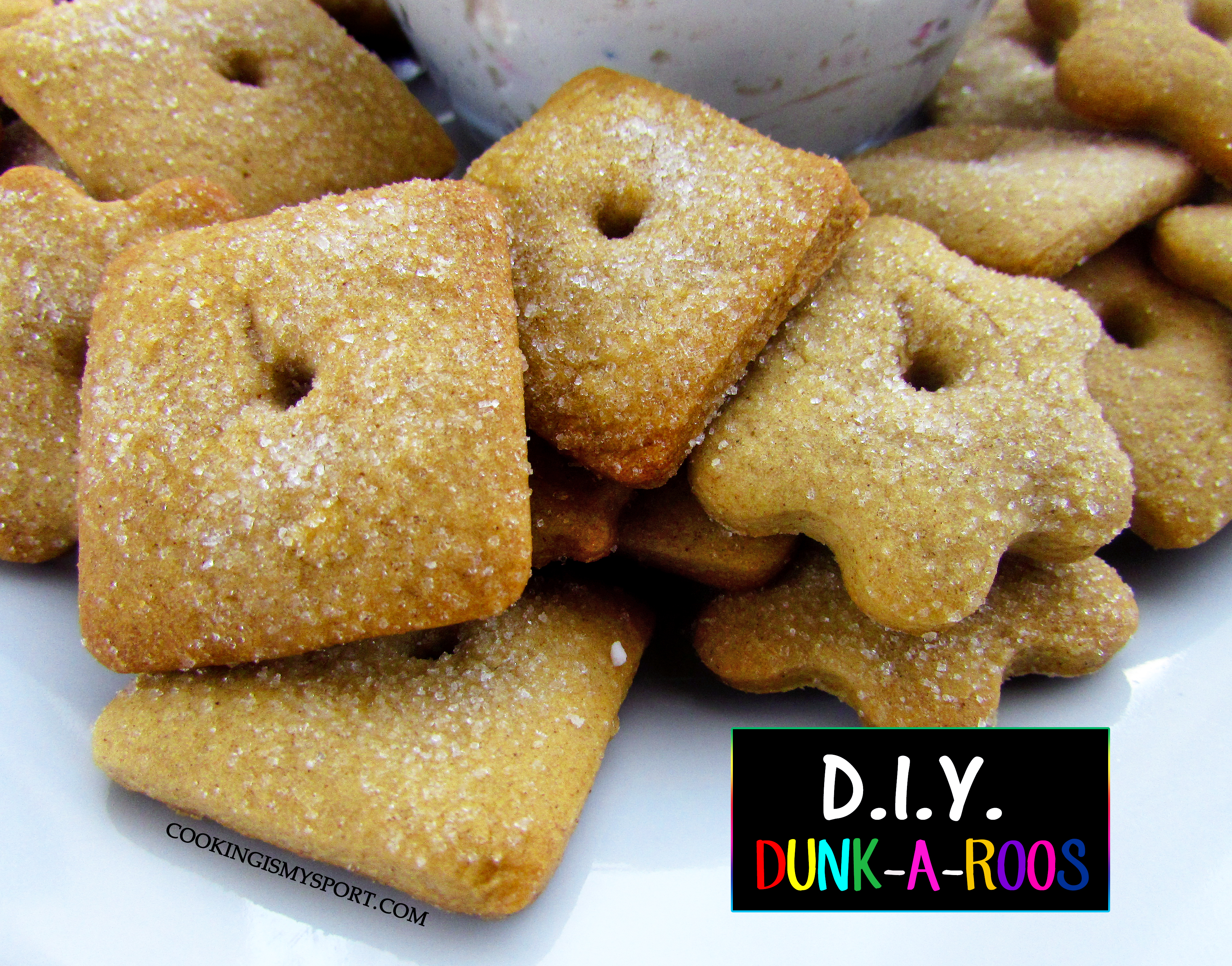 Well, every kid I knew was crazy about them–myself included. Dunk-a-Roos were THE snack. If you brought them with you to lunch, it was guaranteed that you were gonna be swarmed by others who would encourage you to share. Except if you were like me, you were greedy and kept them all for yourself, because…no. 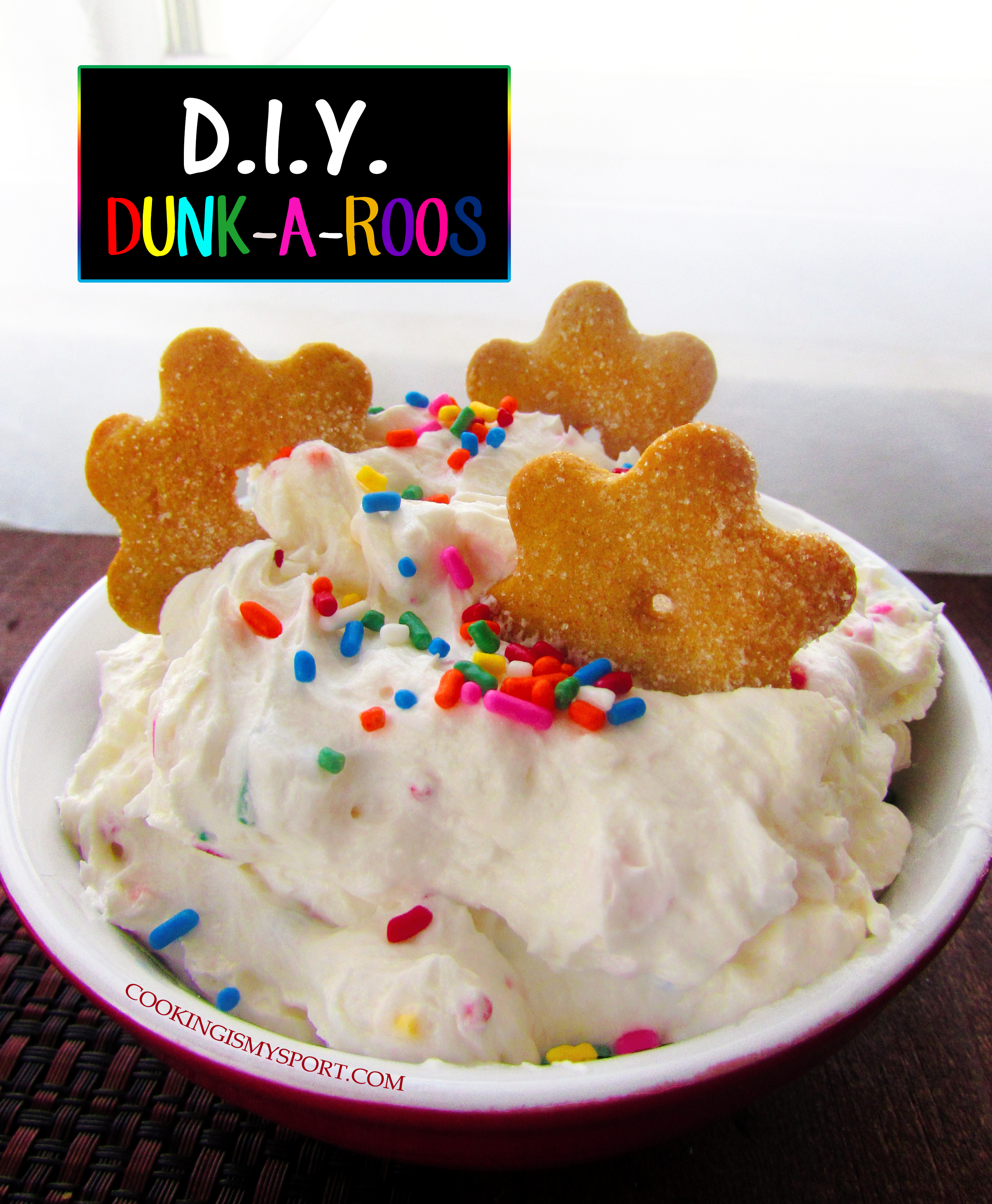 Boys and girls of all ages, I give you: Do It Yourself Dunk-a Roos.

I mean, c’mon. Doesn’t this just look like fun? Not only was it fun for me to make this, it was also so easy. The process is actually similar to making crackers. The dough is one of the least finicky I’ve ever made–it’s not a whole lot and it comes together in minutes. You’re going to want to roll it pretty thin in order to get the crisp texture and ‘snap’ that you want from the cookies. Of course, if you would prefer them softer you could always roll them thicker or just bake them for less time. If you don’t have tiny cookie cutters, I wouldn’t worry about it either. Just use a pizza wheel or a sharp knife to cut them into squares; I promise you it won’t make a difference. 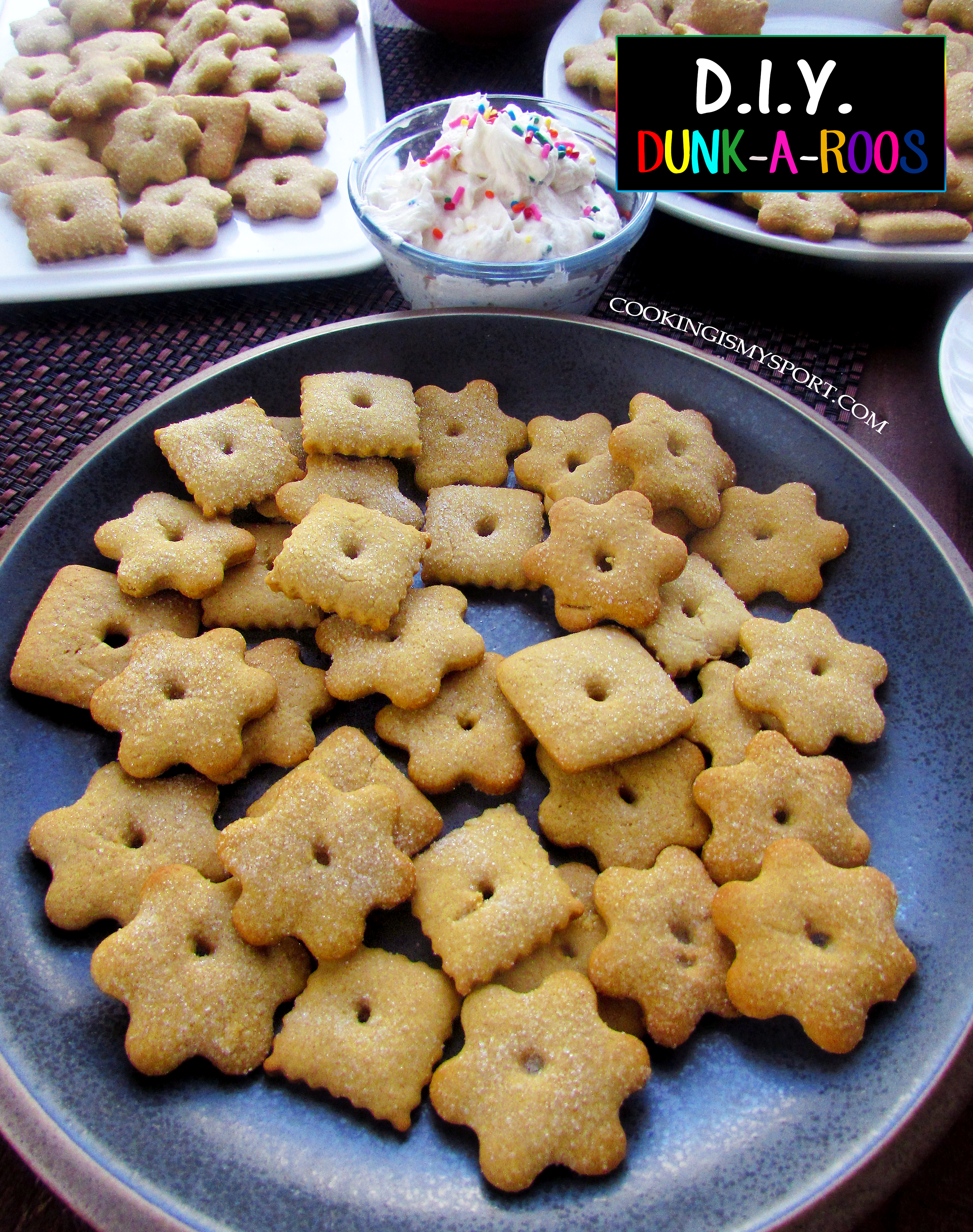 The ingredients are minimal and you most likely have them in your house already; the brown sugar and cinnamon are there to give them the richer, caramel-y flavor that I remember the Dunk-a-Roos from my past having. The cookies themselves aren’t overly sweet and I really don’t think they need to be considering that they’re meant to be eaten with the funfetti dip, which (trust me) is plenty sweet enough on it’s own. My version is made with a butter base and flavored with vanilla extract, BUT, if you wanted to get a little creative with it I can see variations made with almond extract, or cream cheese and citrus extracts instead and coming out fantastic.

This was a really fun little project that me and my niece did together and it turned out really yummy results. It received her stamp of approval and seeing as 5 year olds are some of the toughest critics out there, I’m more than satisfied with that. Try it out with your little ones—or just make it for yourself. Somebody’s tummy is going to be happy regardless; I guarantee that.

In a medium bowl combine the  flour with the baking powder, baking soda, cinnamon and salt and set aside.

In the bowl of a standing mixer with the paddle attachment (or using a handheld one) cream together the butter and brown sugar until light and fluffy.

Scrape the dough out and onto a piece of plastic wrap. Shape into a disc, wrap tightly and refrigerate overnight.

Preheat oven to 350F. Line two sheet pans with parchment paper. Divide the dough into quarters, keeping the other 3 in the fridge while you roll out the one.

Sprinkle a clean work surface (like a pastry mat, wax paper or a cutting board) with powdered sugar or flour. Roll out the quarter of dough to about 1/8 inch thickness. Cut into whatever desired shapes you like, but I would keep them small. Reroll and cut the scraps as necessary.

Place the sheet pans in the freezer for around 10 minutes. Sprinkle the tops with the white sugar, and bake for 5-8 minutes.  Let cool on pans for 3 minutes. Remove from pans, and let cool completely on wire racks.

For Cooke Dip: Cream together the butter and powdered sugar In the bowl of a standing mixer with the paddle attachment (or using a handheld one) until it’s light and creamy. Add the salt and vanilla. Add the milk until it’s fluffy and not too stiff. Gently stir in the sprinkles. Serve the cookies with the cookie dip when they’ve cooled and store the dip in the fridge when not in use.