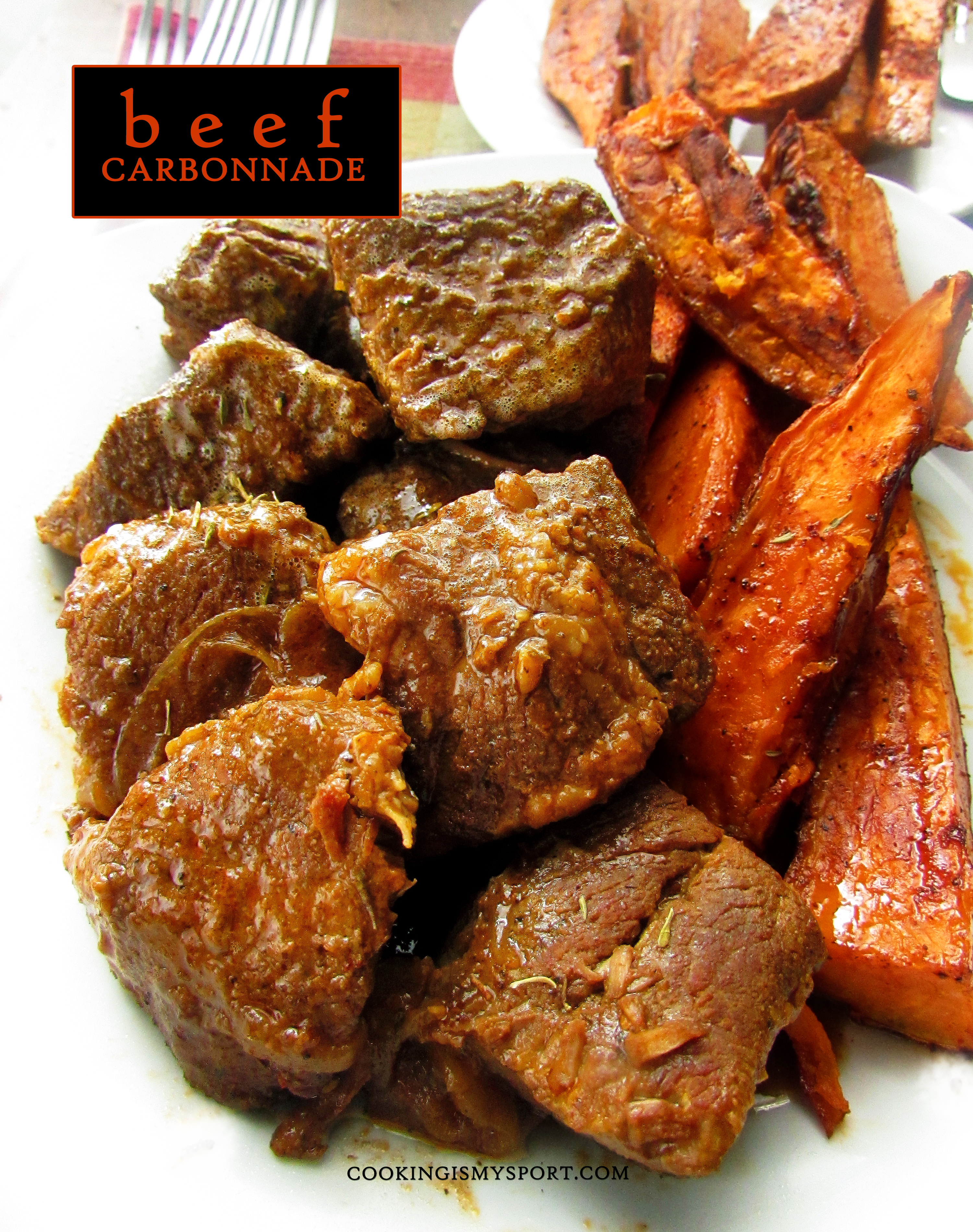 I’m going to piggyback off my last week’s post where I gave some free advice that I’ve picked up along the way of my own cooking journey. I’ve mentioned before on here that I have a not-so-minor addiction to buying/collecting cookware, bakeware and kitchen appliances. The majority of my Amazon wishlist is composed of the above. The shopping spree of my dreams would legit be at Williams Sonoma, where I could literally buy any and everything that I want. The more cooking/baking techniques and different dishes that I learn, the more gadgets and appliances I want in order to make them or take certain dishes to a certain level. 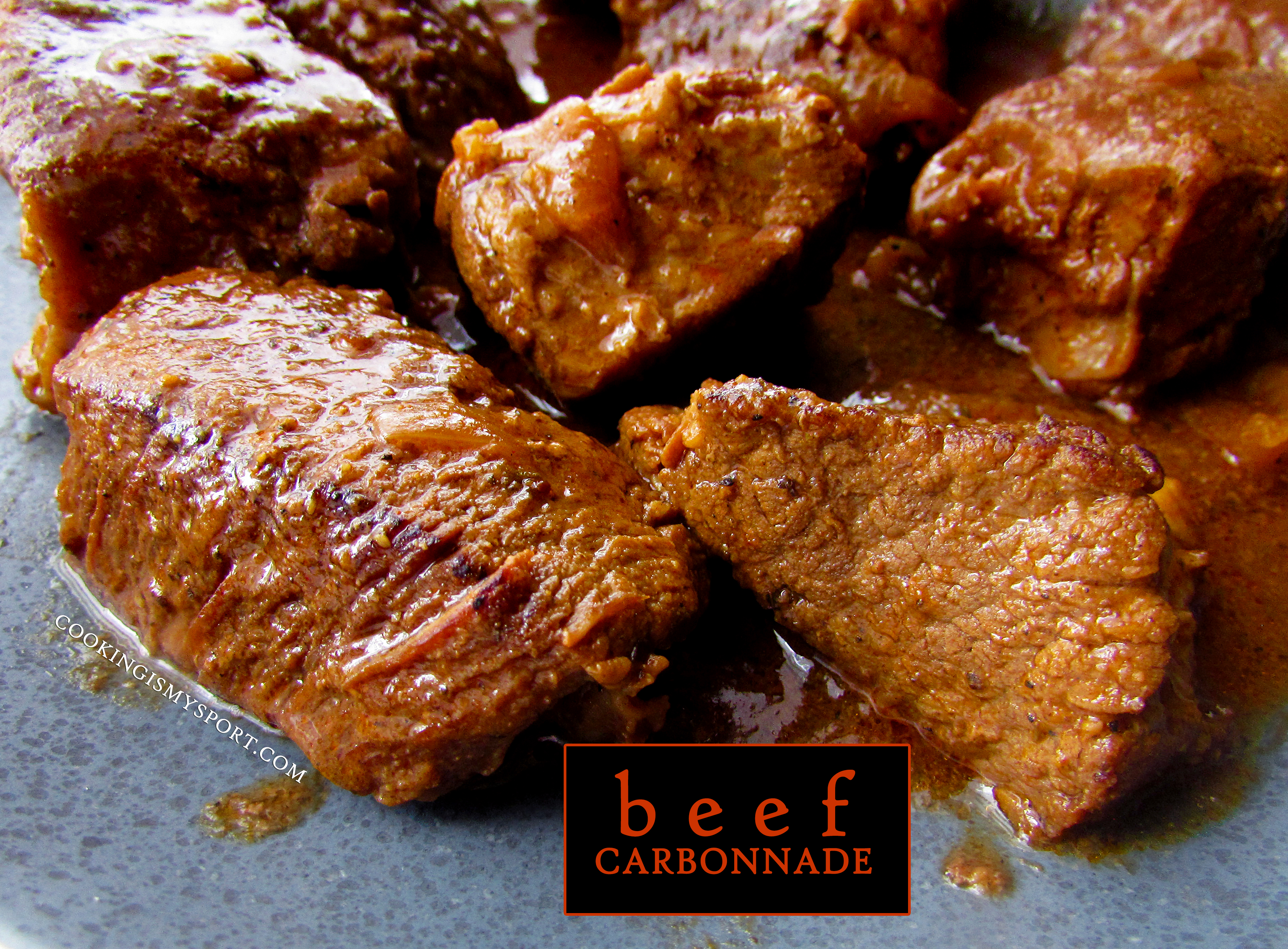 Just as there’s a lot of cooking advice to be taken in, there are just as many pieces of cookware, bakeware, gadgets or appliances out there. It’s perfectly fine to get a collection going once you’ve hit your stride and feel pretty confident in your abilities. However if you’re just starting out and and are just looking to *begin* stocking your cabinets with pots/pans, my advice to you would be similar to the advice I gave last week.

Less is more– at least in the beginning.

If you go to just about any Bed Bath & Beyond, Macy’s or even Target and Walmart you’re going to be able to find the huge sets of cookware that usually come with a few pots, skillets and spatualas. Those are fine–I’d even say that they’re a worthwhile investment provided it’s from a good company/brand.

The only thing is, the majority of cookware sets aren’t going to have what I personally consider a must-have in the kitchen collection of amateur and expert cooks alike. Any guesses on what it is?

One of the best decisions I ever made on my cooking journey was to invest in a good Dutch oven. It was a real game changer. Prior to that I had been using a stock pot. Trust me, there’s a big difference and in my opinion, no comparison between the two. There’s just no beating how many different uses you can get out of a Dutch oven.

You’re going to get more latitude from a Dutch oven which gives more surface area for a more even cook. I learned how to fry chicken while using a Dutch oven (they’re taller and also hold/distribute heat even better than cast iron).Most are pretty big–enough too make big pots of stew, soup and chili. They’re big and also wide enough to fit whole roasts and the vegetables. The Cephalon ones are my favorite; it’s a good non-stick surface that doesn’t wear out and the structure of the pot itself is strong and durable. 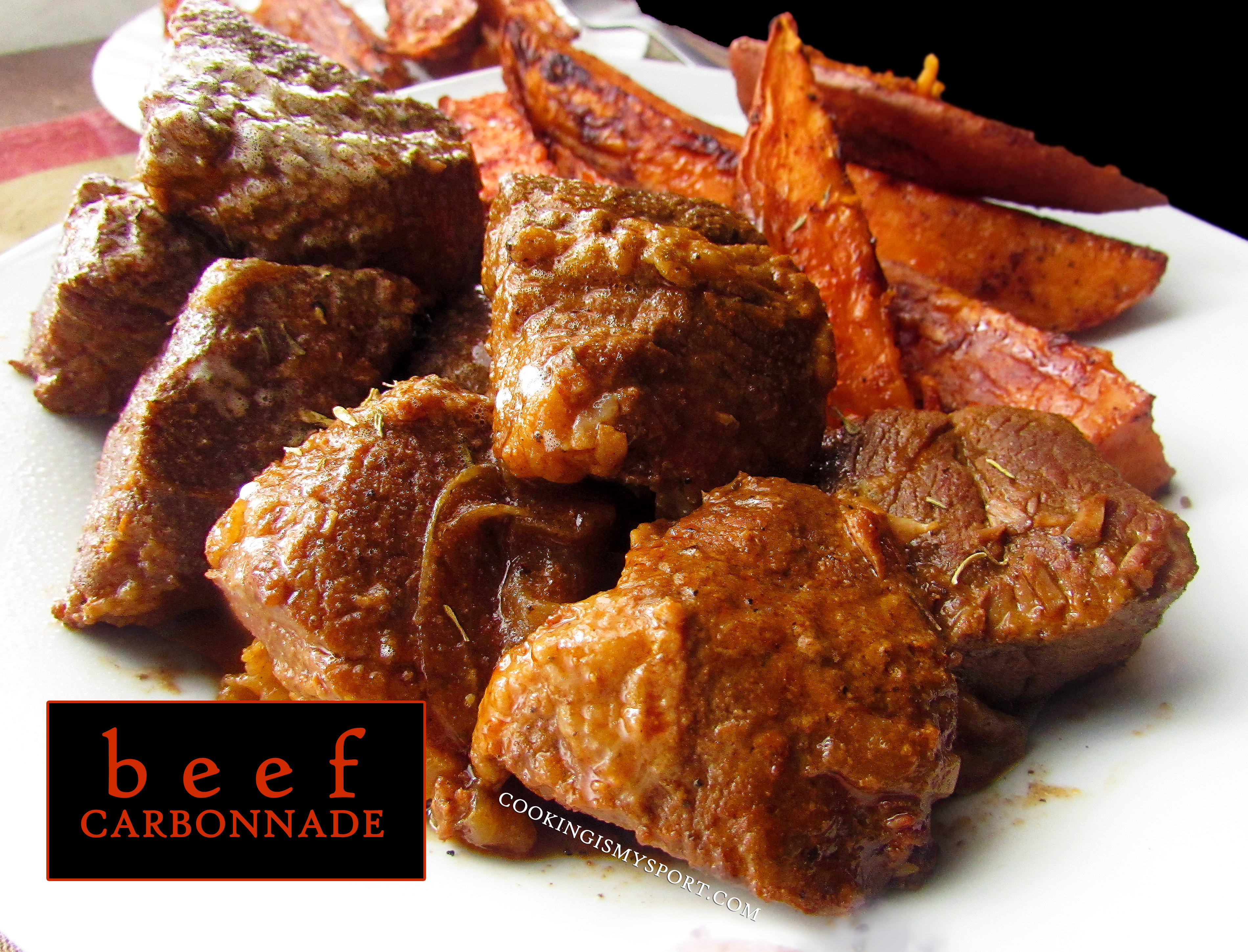 A good Dutch oven isn’t the cheapest thing you could buy for your kitchen, but I would still say it’s probably the best thing you could buy whether you’re starting out or not. It’s a *really* good investment. Anything you can make in those chintzy skillets or pots you got in a set, you can (and likely should) be making in a Dutch oven instead. When I was thinking about what I wanted to say for this post, all I could think about was how perfect it turned out BECAUSE of my Dutch oven.

So listen, guys. The advice for the week is: get a Dutch oven. 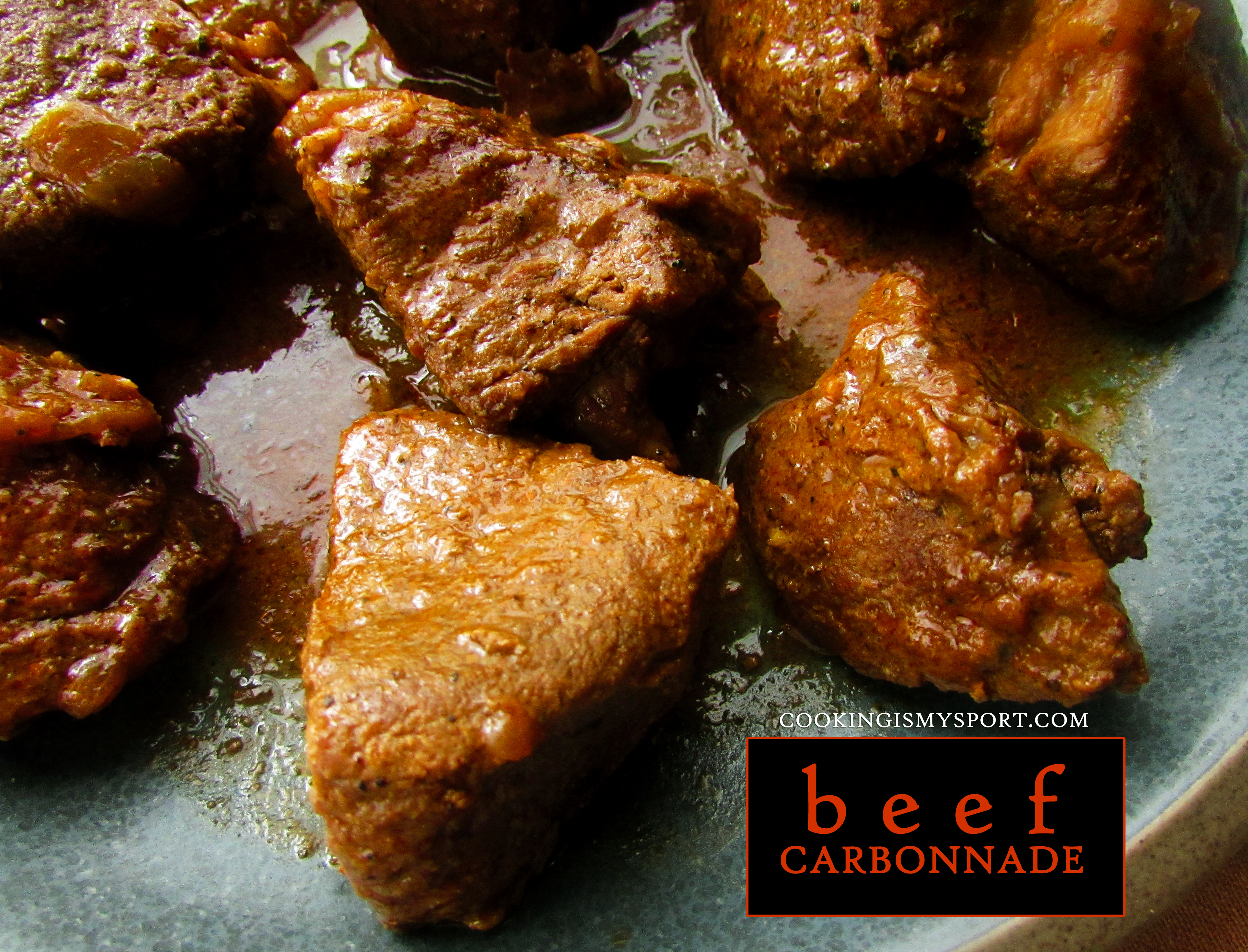 This recipe is pretty basic, as stick to your ribs food should be. Meat + onions + gravy = Boom. I think the mace and the smoked paprika in the spice rub give the meat a special ‘something’ that really works.  Beef & chicken broth, beer, and apple cider form the base of the gravy. There’s also juuuuust a tad bit of apple cider vinegar that gets added to it–I was nervous about the acidity but it’s actually just right.

Dutch ovens were *made* for meals like this. You want a Dutch oven so that you too can make rich, hearty braises with savory meat that simmers away in rich, hearty broth until it’s fork tender, filling your kitchen with the most glorious of smells. Now theoretically, could you make this in a stockpot if you didn’t have a Dutch oven yet? Eh…yeah. I guess. But the Dutch oven will give you the space and heat distribution that will give you the best results. SO GET ONE.

In a small bowl, combine the seasoned salt and pepper, onion powder, mace, smoked paprika, dried thyme, and brown sugar with a fork.

Place the meat into a large bowl and sprinkle about half of the spice mix over it. Stir, then sprinkle the rest on top and stir until evenly coated.

Heat a few tablespoons of vegetable oil (or butter, or solidified bacon fat) in the bottom of a Dutch oven over high heat. Sear the meat on all sides until browned. (You may have to do this in 2 batches in order to not crowd the pot) Remove the meat to a medium bowl and keep covered with aluminum foil.

Deglaze the pan with the apple cider, allow to simmer until the liquid is mostly dissolved, then add the onions to the pot,  and lower the heat down to medium. Allow the onions to cook until translucent and limpened, around 5-7 minutes. Add the tomato paste and garlic, stir  and allow to cook for about 5-7 more minutes. Add the flour and stir to coat the onions, allow to cook until flour is slightly browned, about 2 more minutes.

Add the broths, beer, cider vinegar, bay leaves, soy sauce. Stir to scrape up the bits from the bottom of the pot.  Bring to a boil, then reduce heat back to medium. Taste and adjust for seasoning. Place the beef back into the pot.

Cover the pot with a lid, or tightly with aluminum foil and place on the bottom rack of the oven. Cook until a fork inserted in the beef meets little resistance; it should be close to pull apart tender, 2 to 2 1/2 hours.

To make gravy: In a small bowl, combine a few tablespoons of flour with about 1/2 cup cool water. Use a whisk to stir until the flour dissolves. Strain several cups of the cooked beef broth into a saucepan, then pour in the flour water. Bring to a boil, then reduce heat to medium-low, stirring a few times. Allow to simmer until thickened into a gravy, about 15-20 minutes.