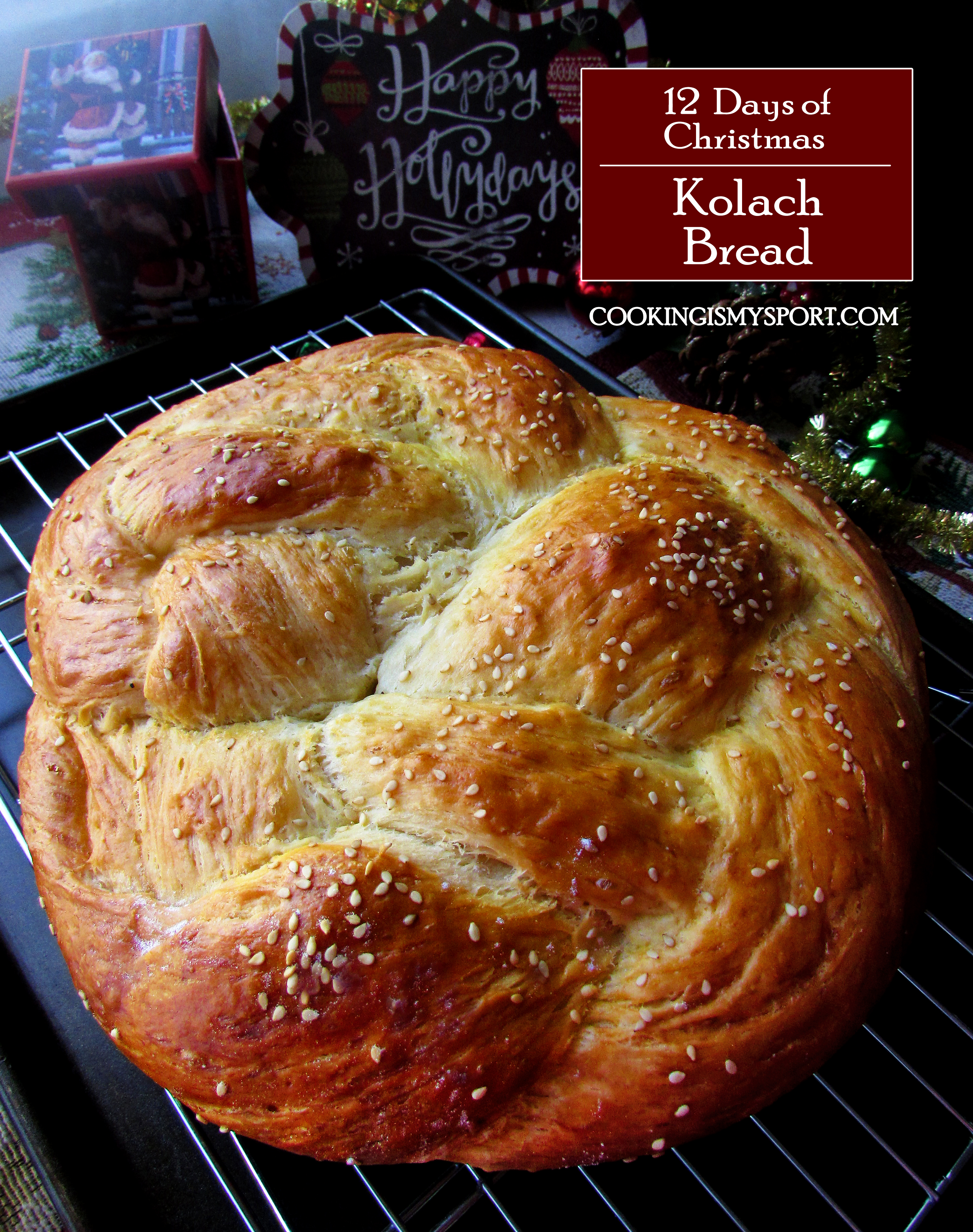 There’s just something so satisfying to me about baking bread. I really do love the entire process from start to finish. Especially the part of the ‘finish’ where I get to taste it.

I’ve incidentally developed a habit of making at least one fancy holiday bread for Christmas, and I didn’t want to break that tradition this year. I had a few different ideas, but because I was crunched for time and also frankly, because I was kinda tired from the last few days of baking, I eventually decided on one of the more simpler ones. This was it. 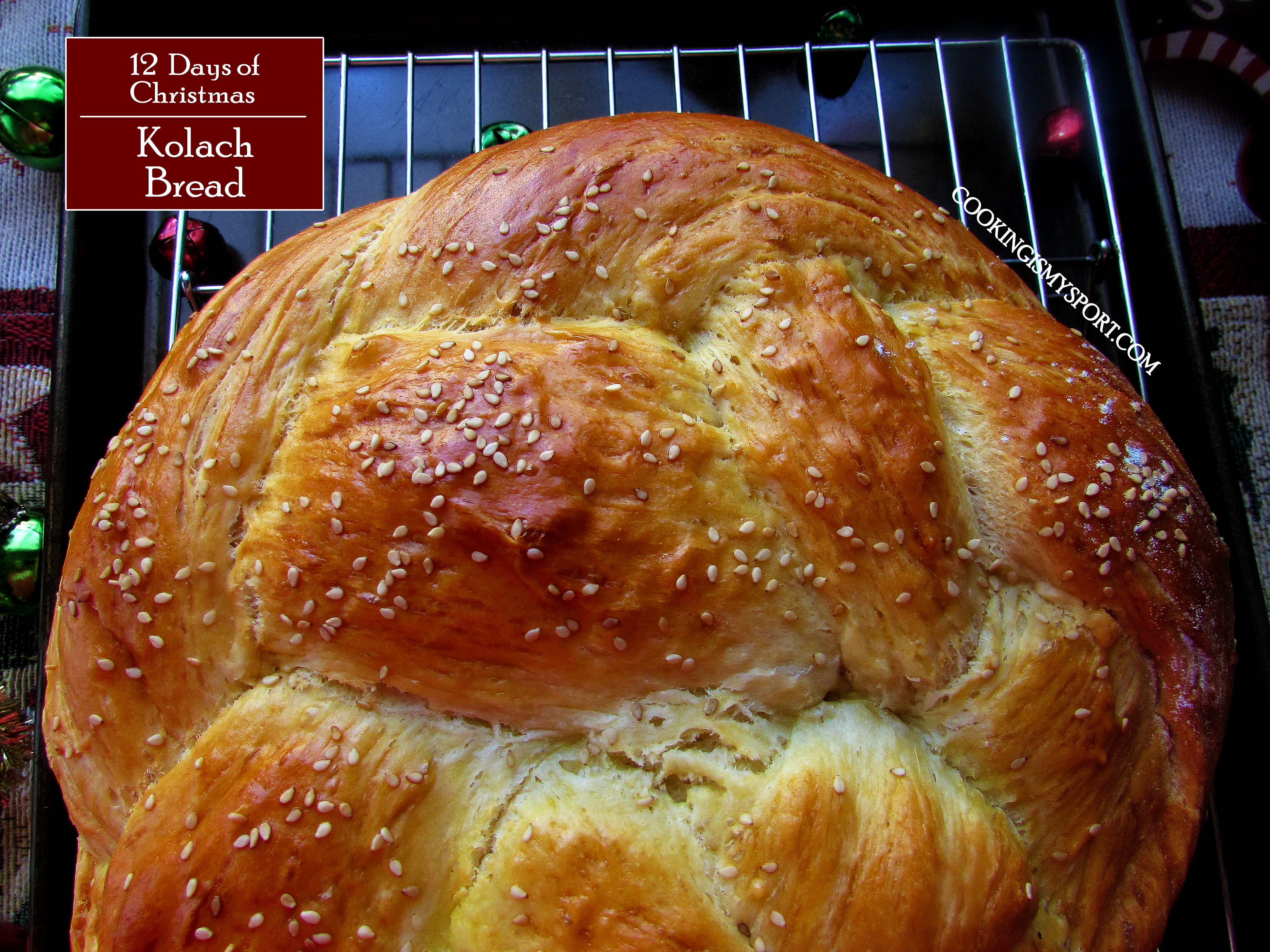 Festive breads and cakes are a huge part of the holidays in Eastern Europe. I’d heard of babka, stollen, and povitica before, but Kolach was a new one for me.

Kolach Bread derives from the Czech word ‘kolo’ (wheel or ring). It’s a bread that’s typically been braided/coiled into a ring, then in some cases, stacked on top of each other. My braids and coils aren’t stacked, but they did create what I think is still a pretty nice bread to look at. 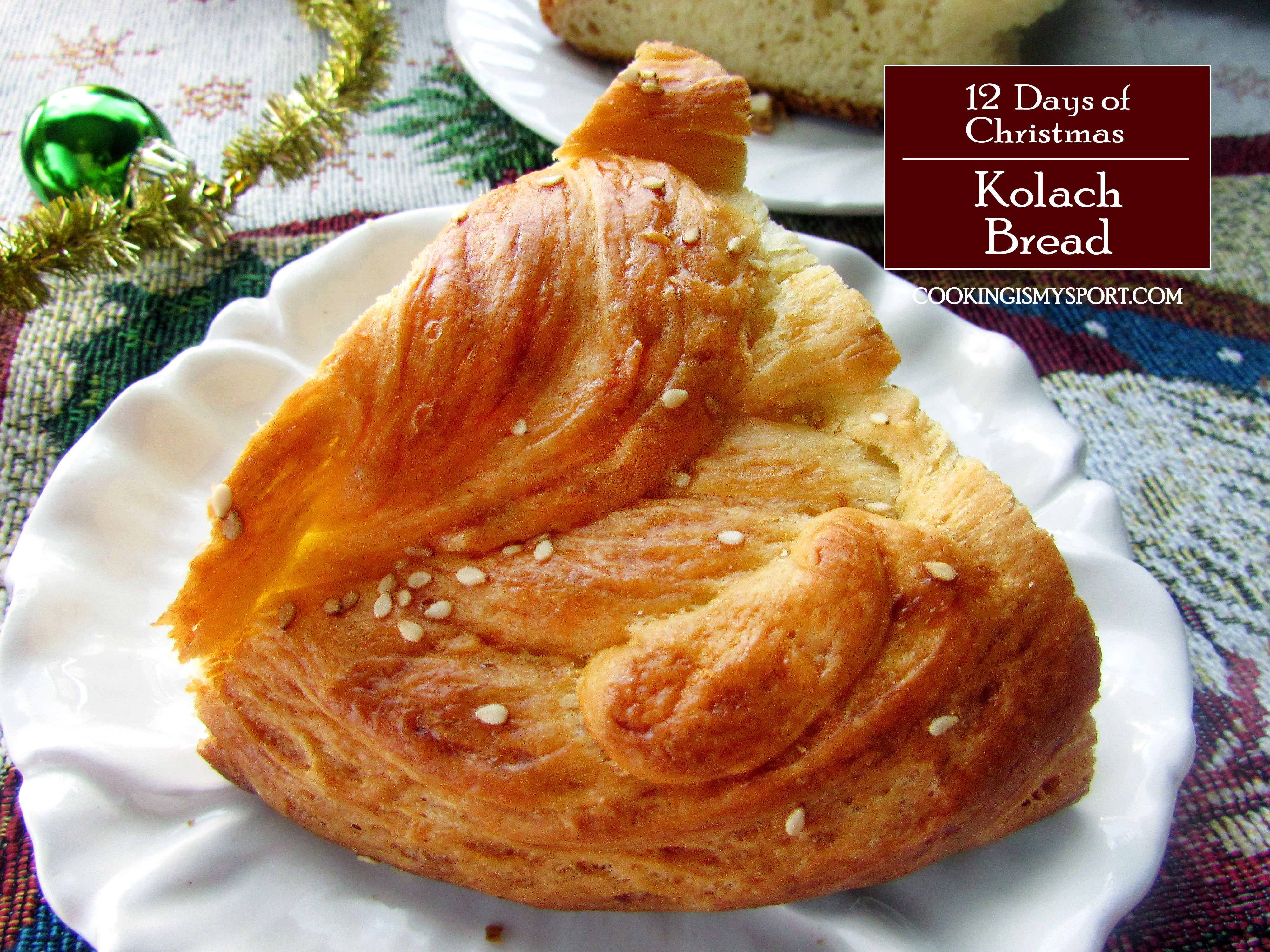 I loved the ‘feel’ of this dough. The butter and egg yolks give it a slick, pliable feel that makes it VERY difficult to overwork, and also lets you know even before baking that it’s going to turn out great.

If you’re familiar with basic bread baking techniques, then you’re gonna find the process for making this very simple. The dough is divided into three ropes, the ropes are braided together and the braid is then coiled into a kolo— a ring. It reminded me of how I make challah honestly, except after the first rise, I typically make my challah in loaf pans. 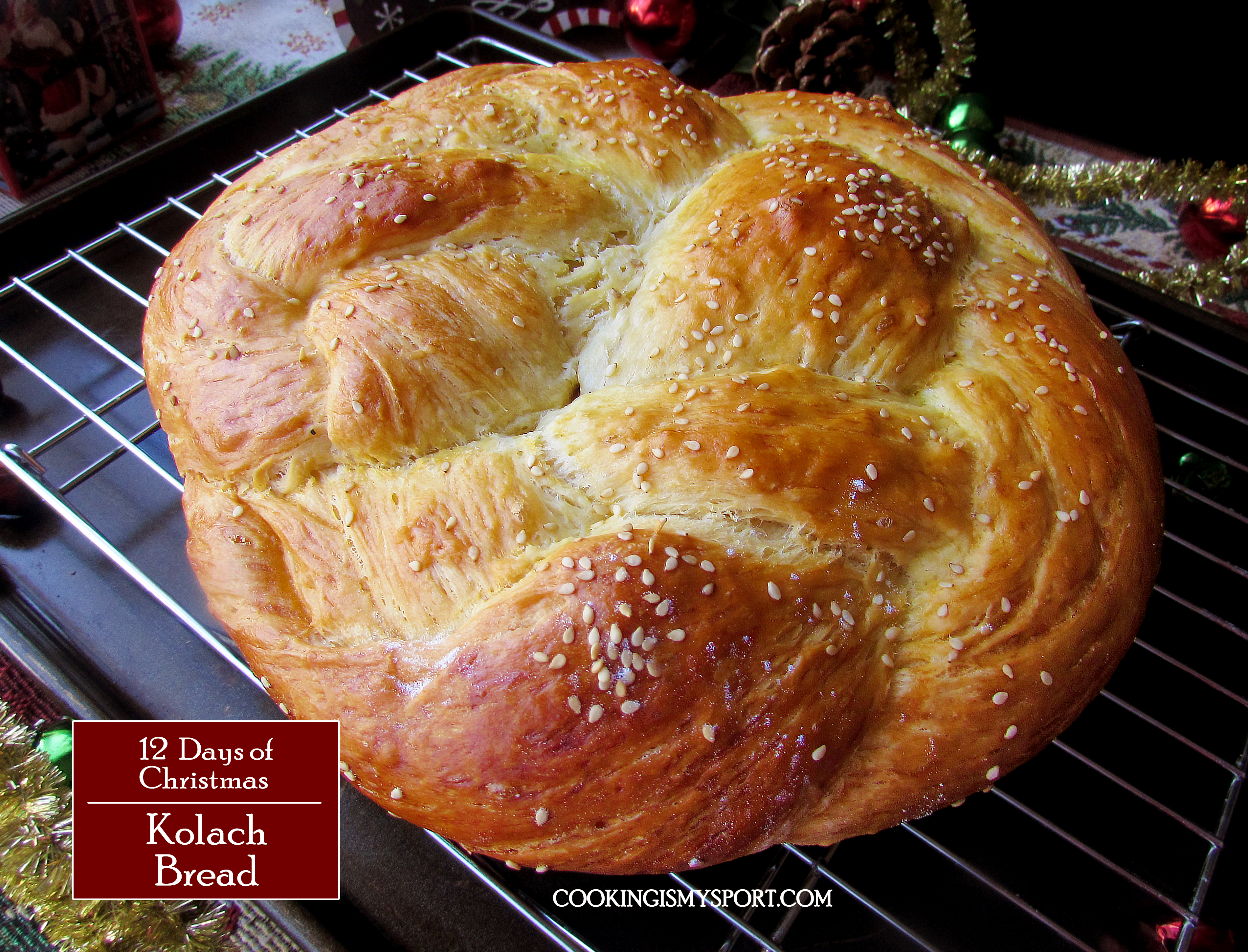 I’ll just say one thing right upfront: this recipe makes a lot of bread. Like, a LOT of bread. By the time you get done you’ll have not one, but two massive loaves that will feed a crowd. You want my advice? Either keep one and give the other away, or keep one for Christmas breakfast or dinner, and freeze the other one for another time. The taste will of course make you tempted to gobble them both up in one sitting or within the space of a few days, but I wouldn’t exactly advise it. Portion control and all.

And speaking of taste… 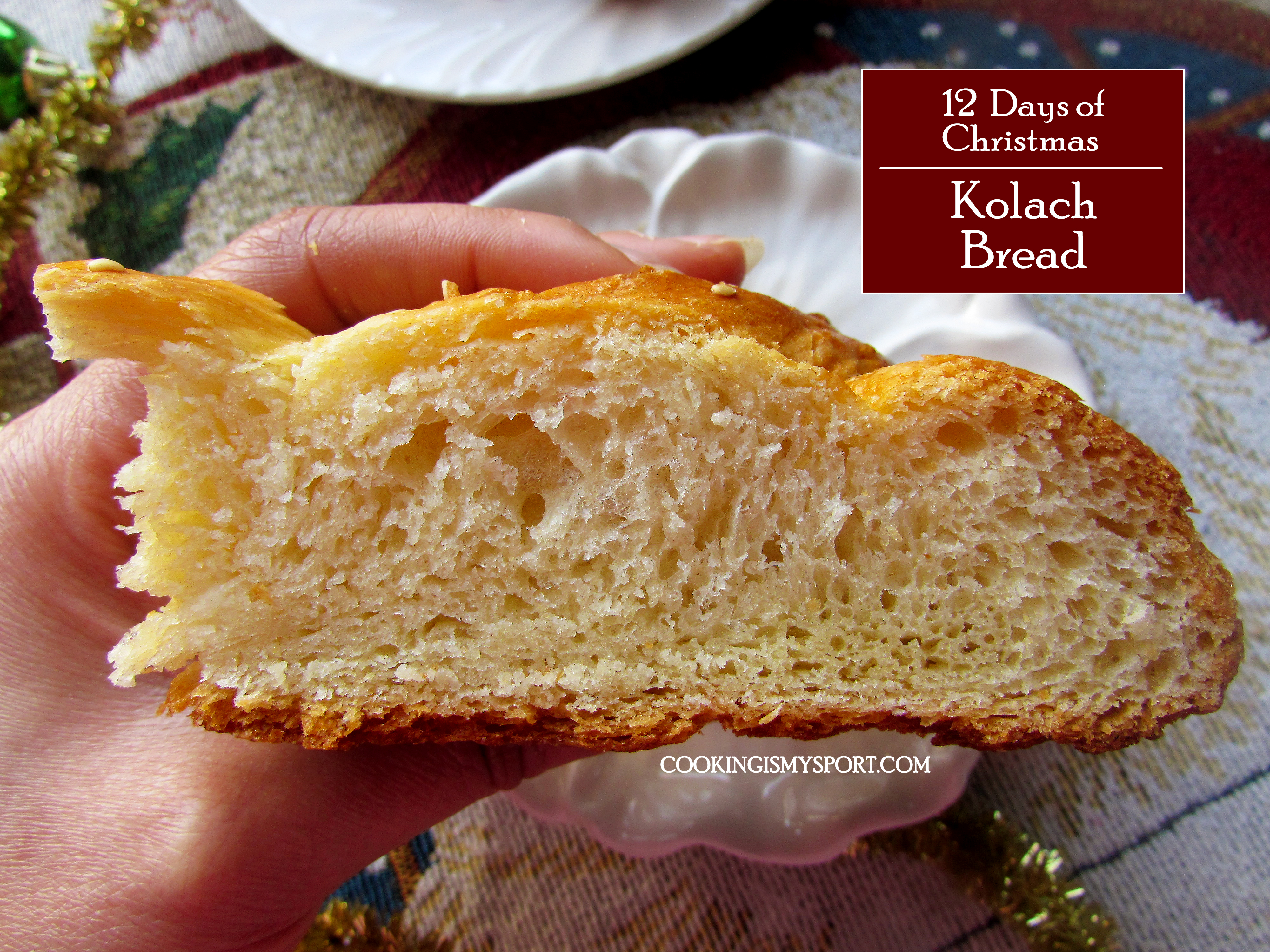 Rich, rich, rich. Buttery, buttery, buttery. That’s the most honest way I can describe this bread for you guys. The texture is just fantastic. It’s so good, so so SO good that it doesn’t even need added butter or jam. I’m serious. This is right up there with the delectable goodness of brioche, except it’s not nearly as messy or finicky to make. Plus as it bakes, your kitchen, and possibly your whole house is going to smell like a bakery and send anyone who may be in it at the time wandering over to the oven asking you “What smells so darn good?” 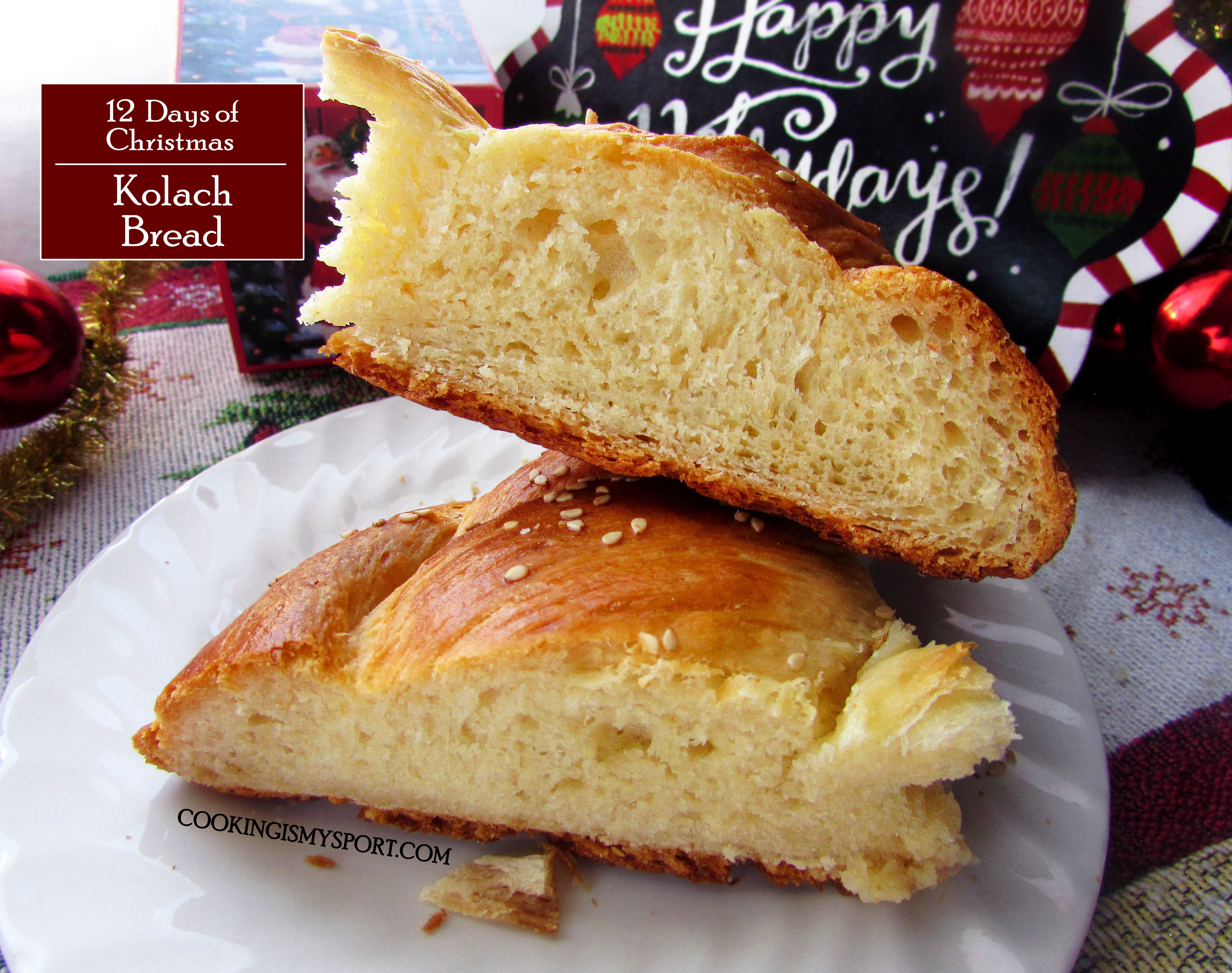 Well, I guess this is it, again. We’ve reached the end of the 12 Days of Christmas. I hope you guys have enjoyed the series I put out this year and that you get to try some of the recipes for yourselves this holiday season. Check out any of the recipes you may have missed below–I know twelve posts is a lot to keep up with.

Linking this post up to this week’s Fiesta Friday #203. I wish all of y’all a very happy holiday and new year. Thanks for all the love you give Cooking is My Sport–I really do appreciate it.

In a small bowl, Sprinkle the yeast on top of the warm milk, then sprinkle 1 tablespoon of the sugar on top of that. Allow to rest for 10 minutes, until proofed and frothy.

In the bowl of a standing mixer using the paddle attachment, cream together the butter, sugar, egg yolks, salt and lemon juice.

Pour the yeast-milk mixture into the bowl and stir to combine. Switch to the dough hook attachment and gradually add the flour in about 1 cup increments. Knead for about 5 minutes in the mixer. The dough should be smooth enough to gather into a mass, but still moist and slightly sticky.

Sprinkle a work surface with flour, then turn the dough out onto it. Knead with your hands for about 5 minutes, using a firm push-pull motion until it is elastic and not sticky, adding more flour if needed.

Grease the mixing bowl, then place dough inside. Cover with plastic wrap and a damp kitchen towel and allow to rest until doubled in size, about 60-70 minutes.

Turn dough out onto a floured surface and gently deflate air bubbles. Divide in half and place one half back in the bowl, keeping it covered so it doesn’t dry out. Divide the other half into three equal parts. With your palms, roll out each part into a rope about 24”  long, and braid together. Coil the braid into one round mass, tucking the end under the coil so it doesn’t break free as the dough rises. Gently lift the mass up and place onto a sheet pan you line with parchment paper. Repeat this process with the other dough half. Cover both with plastic wrap and a damp kitchen towel and allow to rest in a warm place until doubled in size, about 60 minutes.

Preheat oven to 350 degrees. In a small bowl, mix the beaten egg together with the milk. Use a pastry brush to brush on top of risen bread coils. Sprinkle sesame seeds on top.

Bake until golden brown on top and bottom, 45-60 minutes. (Mine baked quickly, so check it early and cover with aluminum foil if browning too fast on top) Bread is done at an inner temp of 195-200 degrees Fahrenheit.  Allow to cool on wire racks for about 10 minutes before slicing.