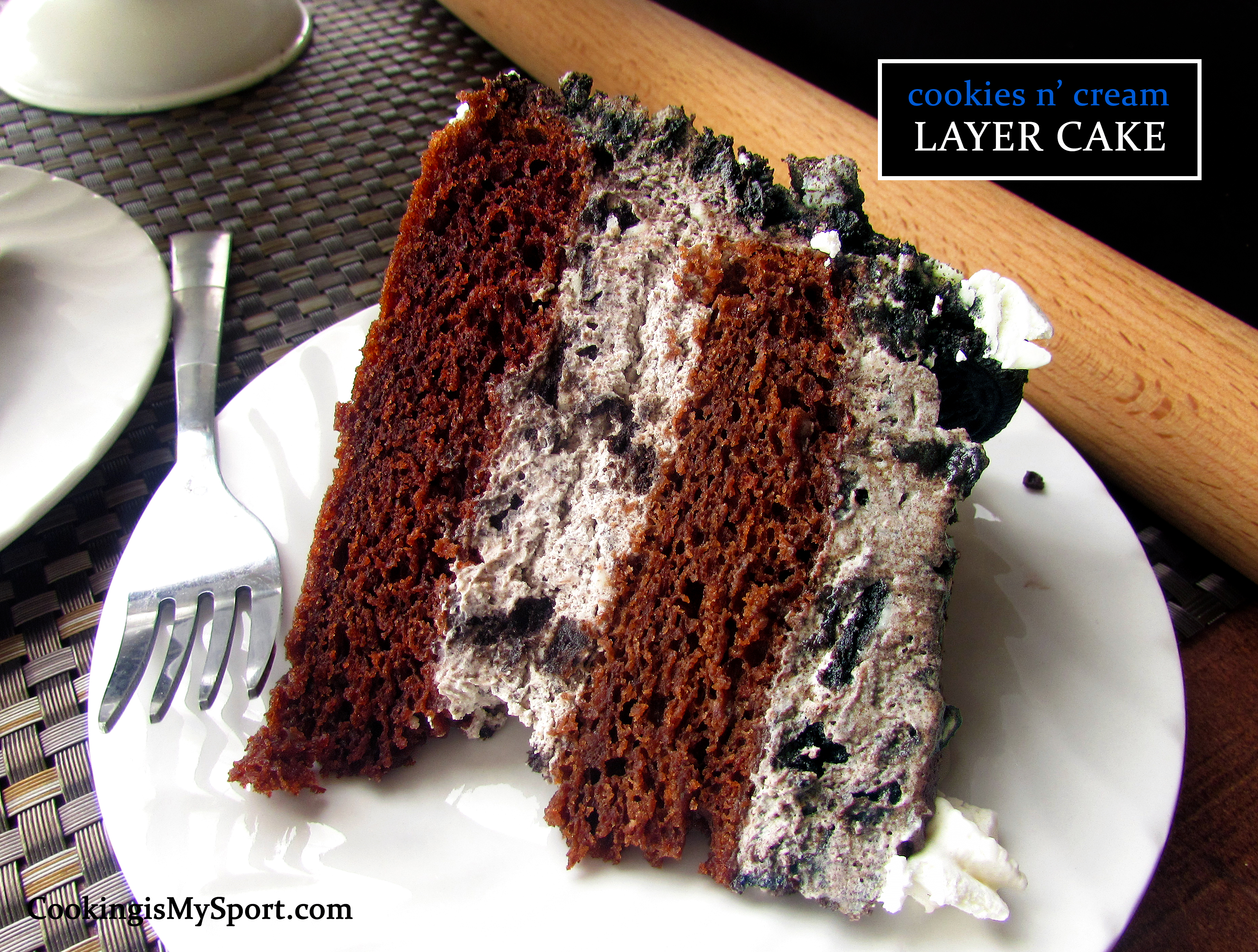 There is a tangible difference in food that’s been made with care and love versus food that’s been made without them and don’t you let anyone tell you there isn’t. Anyone who says there isn’t has never had food made for them with love, and that’s truly unfortunate. When I was younger, I thought it just boiled down to some people were good cooks and some people weren’t–now that I’m older and that I’ve learned how to cook and bake rather well myself I understand that it’s a bit more complicated than that. 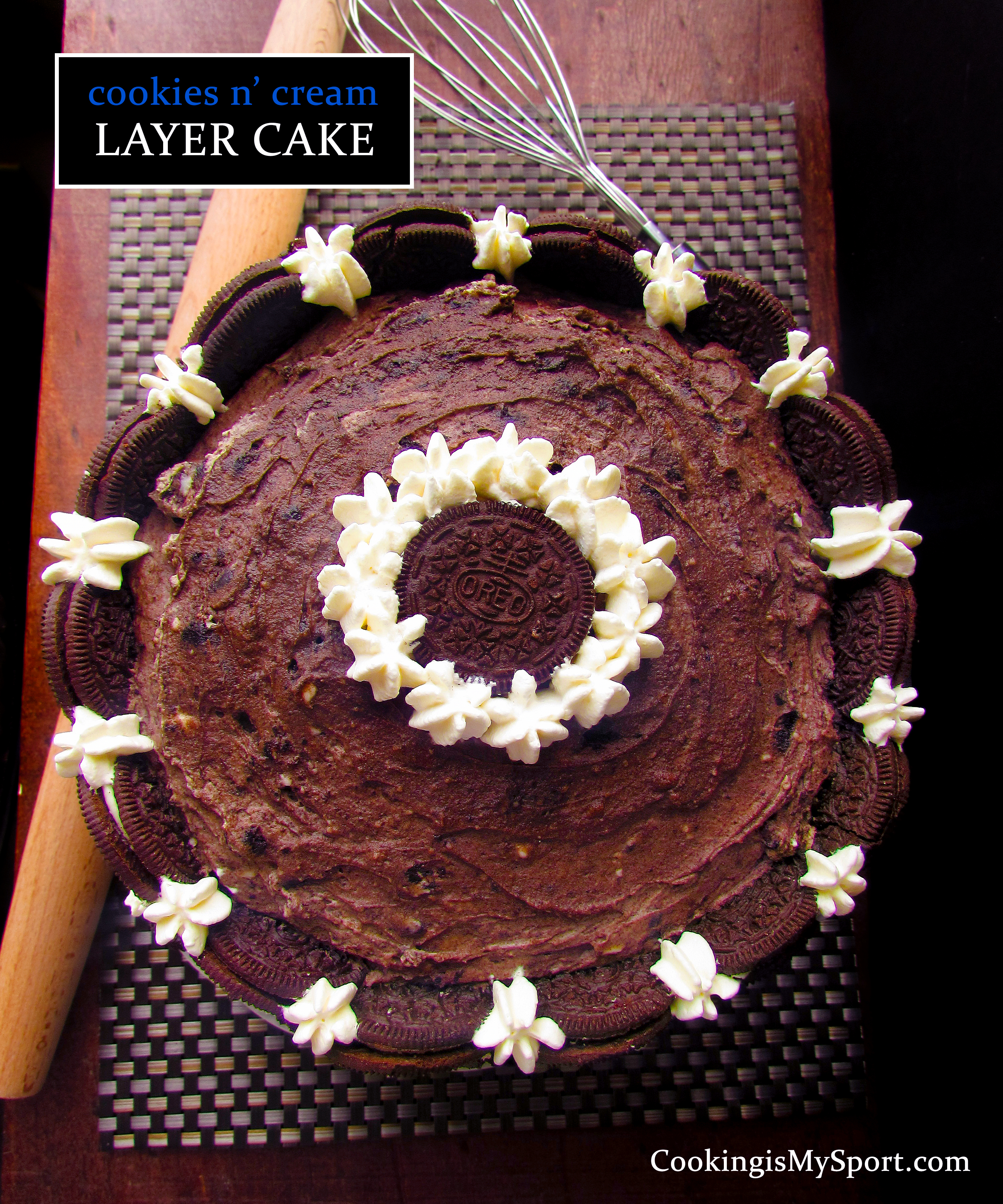 I’ve eaten in swank restaurants where the food was both expensive and undoubtedly delicious, but given the choice I still would’ve rather been in my grandma’s house eating a dish of her smothered steak and gravy.  I would take her Lemon Pound Cake over the most pricey, fancy souffle from the best pastry chef in the world ANY DAY.

Know why? Because regardless of whether or not the fancy food tastes delicious, I know for a fact that there is more love for ME personally in her dishes than anything a chef that doesn’t know me from Eve can put into his food, no matter how technically flawless it is. It may sound corny, but for me, food made with love tastes like home; the taste that gives you the ‘itis’ where you’re full, satisfied, and want to take a nap afterwards, then wake up and have a little bit more. 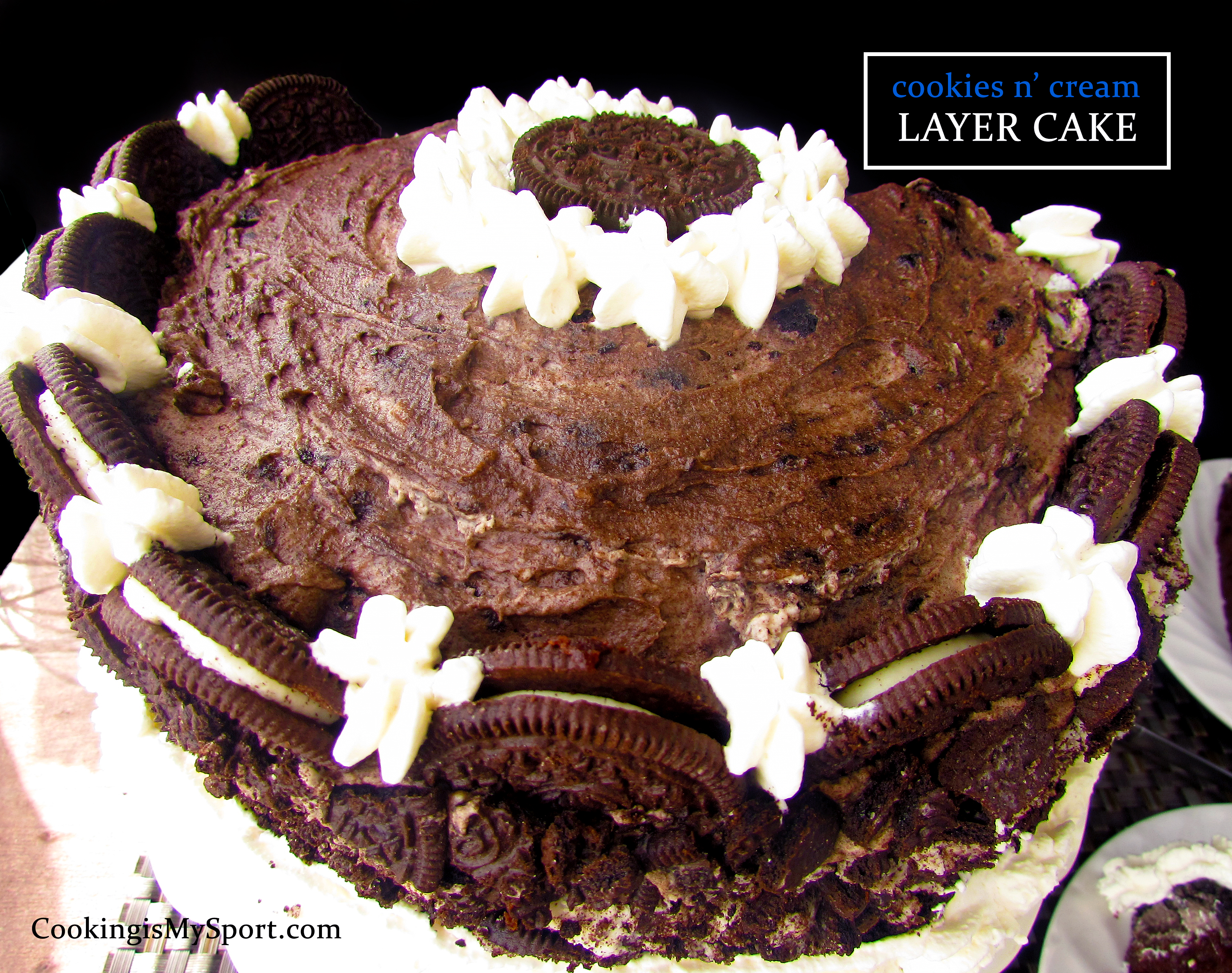 The only thing more gratifying for me than eating food made with love is being the one to make it for my loved ones, especially when it’s a special request/favorite of theirs. Because I know them, I know exactly what they want and how they’re going to want the food to taste and that knowledge makes me all the more determined to put as much care and consideration into what I’m doing to make sure the food meets their anticipation for it. My fellow food bloggers/cooks out there will know the immense feeling of satisfaction that comes with watching someone you love eat and rave over their favorite food and know that YOU were the one to make it for them. It’s a wonderful thing. 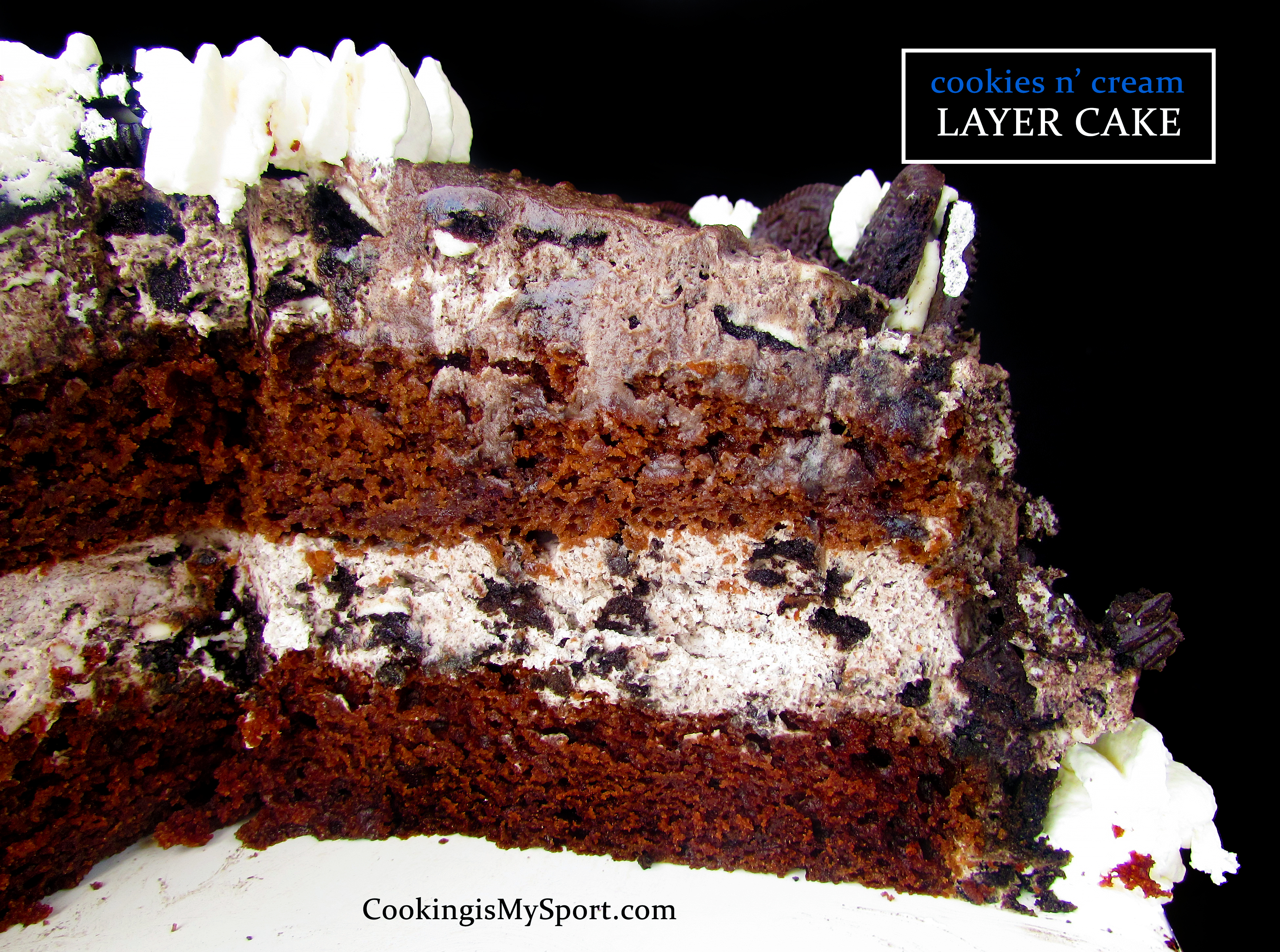 My twin sister came out to visit us a few months ago. There’s little to nothing that I don’t know about her, including the fact that she loves practically ANYTHING cookies and cream flavored. The Cookies and Cream flavor is best described as that of the Oreo sandwich cookie: a sweet vanilla base mixed with chocolate. She mostly eats ice cream, and we very well could’ve just got a pint of it to keep in the freezer but when she booked her flight to come out here I decided to make something that was bit more special than ice cream to surprise her with. 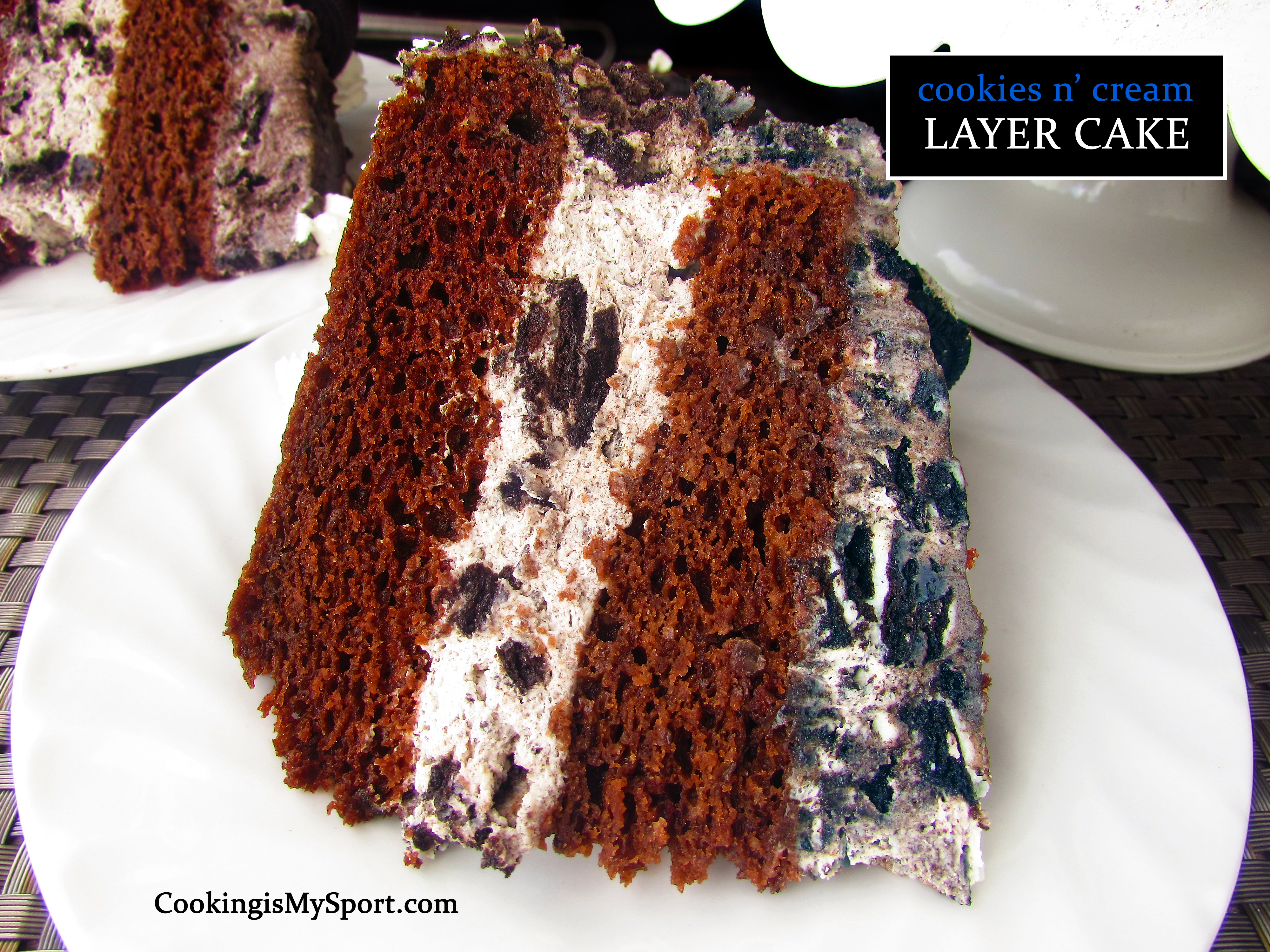 This may be the easiest layer cake I’ve ever made. Unlike most others that have lengthy ingredients and complex instructions this cake is so simple it doesn’t even require a standing or hand held mixer. If you’ve got a large bowl, a whisk (or even a fork), you can make this cake and have it baking in the oven in less than ten minutes, no joke. The recipe that I included does give instructions for making whipped cream from scratch. However. In the case that you don’t have a standing or handheld mixer….lean in closer. A little bit closer. Little bit closer.

*whisper*  You can buy pre-made cool whip that you thaw and it will still work out fine.

The finished product is what is probably the most “Cookies and Cream”-y thing I’ve ever seen or tasted. Normally I’m not even a huge fan of chocolate cake, but the combination of the cake with the cookies and cream whipped cream filling just really works. The cake texture itself is very moist, the chocolate flavor isn’t overwhelming and there’s a fluffiness in the whipped cream that adds lightness to the cake that cuts some of its richness. Then again, I DID make it with lots of love. That was bound to have an effect on the tastebuds.

Sharing this cake at this week’s Fiesta Friday #180  co-hosted this week by Tracey @ My Baja Kitchen and Jhuls @ The Not So Creative Cook.

Preheat oven to 350 degrees. Spray two 9 inch cake pans with cooking spray, then line with wax or parchment paper; spray the paper and set aside.

In a small bowl, combine the flour, cocoa powder, baking soda and salt with a fork or wire whisk and set aside.

In a large mixing bowl combine the sugar, vegetable oil, eggs and vanilla and beat with a fork or a whisk. Fold the dry ingredients into the wet ones and mix thoroughly.

Divide the batter evenly between the two pans and place the pans on a large sheet pan. Bake in the oven until cake separates from the sides of the pans and a toothpick or knife inserted in the center comes out clean, about 20-25 minutes.

Allow cakes to cool in pans for about ten minutes, then turn out and allow to cool completely on wire racks.

Take a knife and cut 10 of the Oreos in half and set aside. Put the rest of the cookies in a Ziploc plastic bag and use a rolling pin or the bottom of a glass to crush into crumbs.

In a mixing bowl beat the heavy cream in 2 batches, 2 cups at a time until the cream has stiff peaks. Beat the vanilla and powdered sugar in with the second batch, then combine them together. Reserve about 3/4 cup of whipped cream in a small bowl in the fridge.  Gently fold in all but about 1 cup of the crushed Oreo cookie crumbs with a spatula.

Level both cakes so that they are flat on the tops. Line the edges of a cake platter with strips of parchment paper to keep the platter clean while you assemble the cake. Place one cake layer on the platter.  Spread about half of the Oreo whipped cream onto the cake, then place the second cake layer on top. Use a spatula to cover the tops and sides of the cakes with a thin layer of the cream, then refrigerate for about 1 hour until the layer is firm, to allow a crumb coat to form.

Place the rest of the cookie cream on top and on the sides of the cake. Take the reserved cookie crumbs and press evenly onto the sides of the cake with your fingers. (This may get a little messy so you can place a layer of foil or wax paper underneath the cake to pick up any of the spare crumbs.) Take the Oreos you’ve sliced in half and press onto the top of the cake. Remove the bottom strips of parchment paper. Take the reserved whipped cream and pipe small rosettes in between the sliced Oreos and along the bottom of the cake to form a border. You can also place one whole Oreo in the center of the cake and pipe rosettes around that, if you like.

Refrigerate for about 1 hour to allow whipped cream to set before slicing and serving. Keep cake refrigerated when not eating.