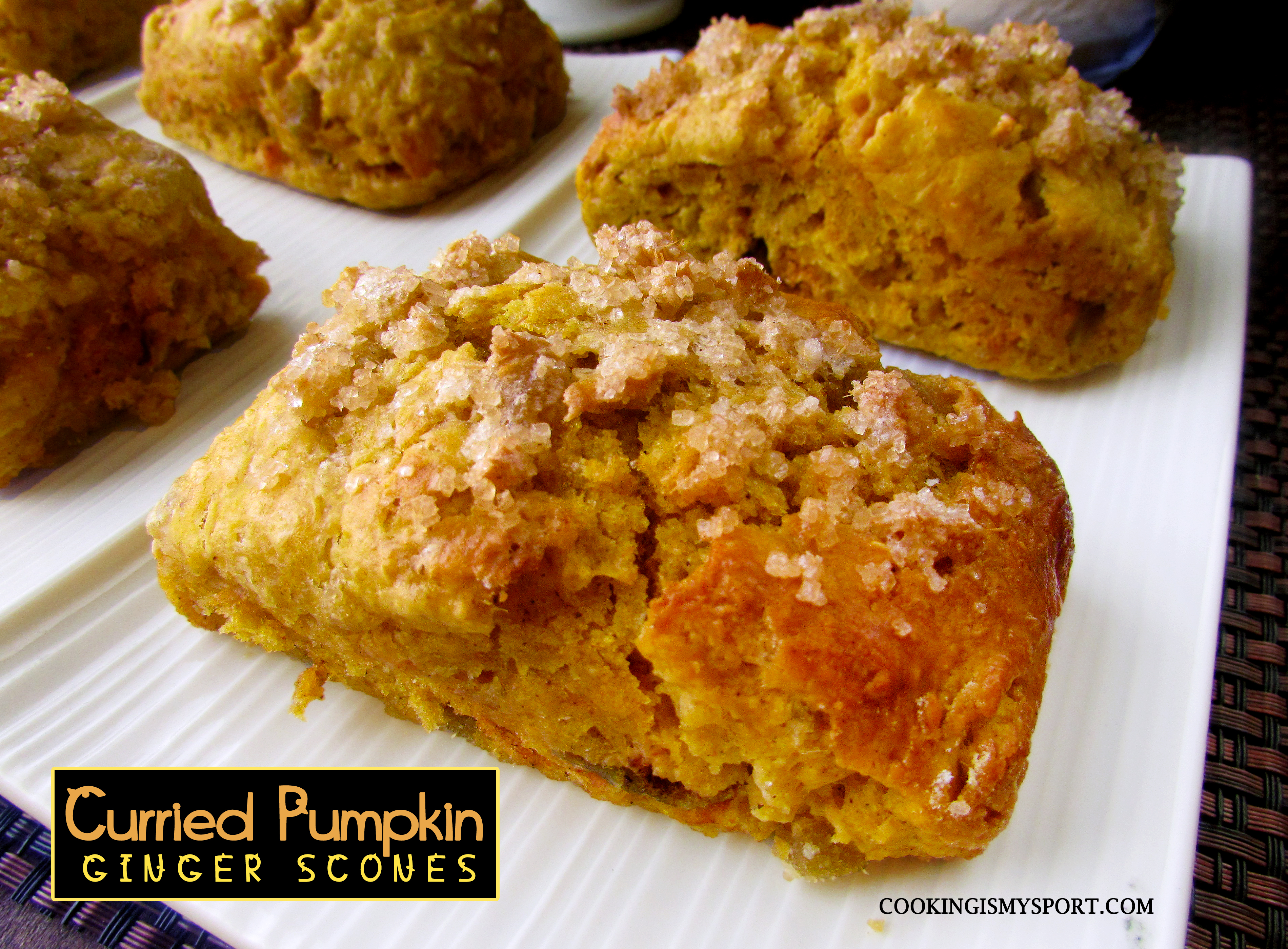 I remember the first time I tried coffee. I hated it.

I’d been wanting to for a long time. My dad would drink a French Vanilla flavored brew and if I close my eyes I can STILL remember the exact smell that would waft out of his coffee cup and into the air of the car as we drove. It was a delicious aroma. I just knew that the coffee HAD to taste as good. I mean, why else would so many adults want to drink it all the time? 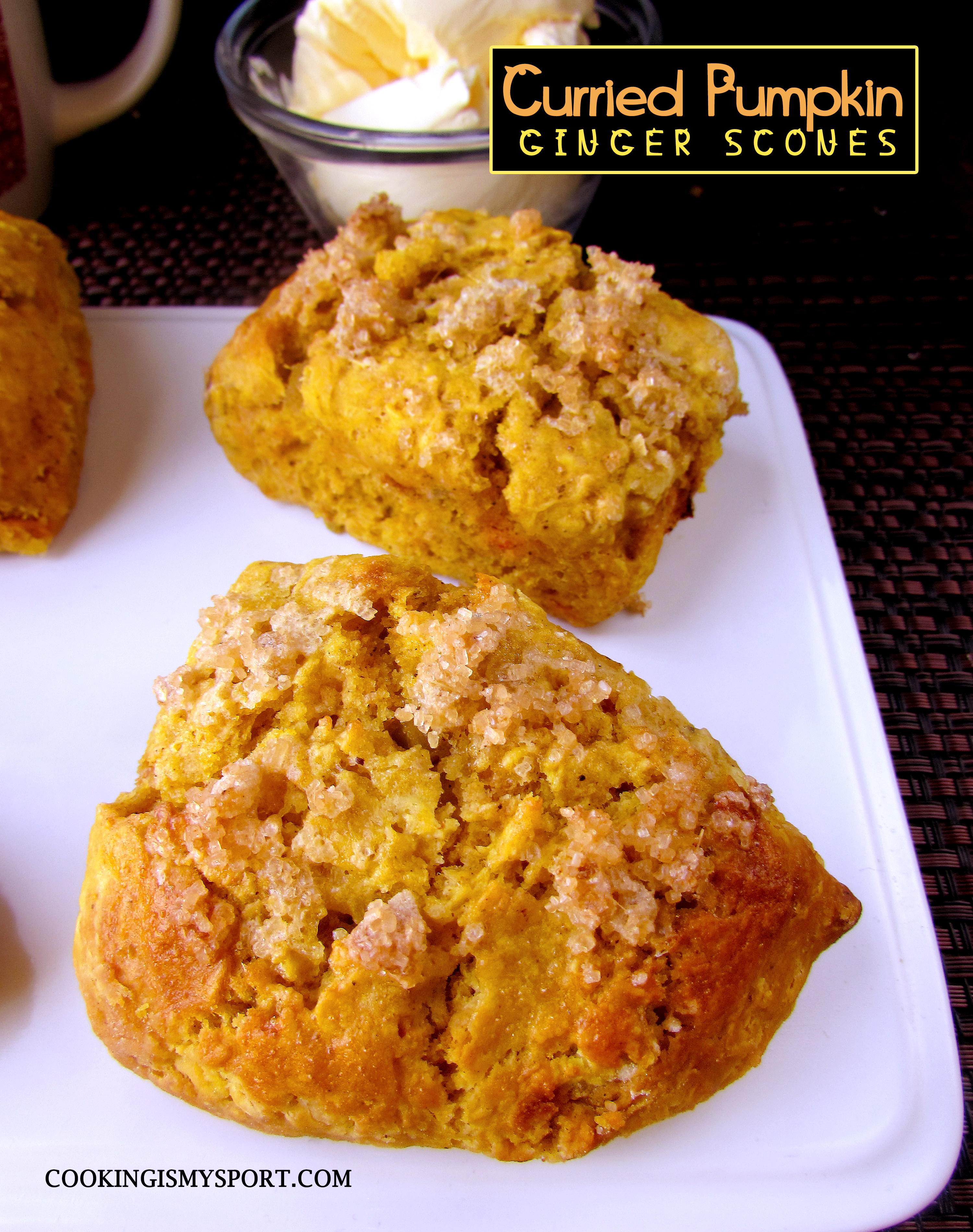 I had my first sip of coffee the same way I had my first sip of Coca Cola: in secret when no adult was looking and I really wasn’t supposed to. I walked away from one with no regrets. It may very well be battery acid but all I knew back then was that Coke tasted amazing and it wasn’t fair that my mom wouldn’t let me drink it.

Coffee? Heh. I thought it bitter. Too bitter. Kinda gross, actually. I was so disappointed. I felt let down. How could something that smelled so good taste bad? And why did grown ups guzzle up so much of the stuff? 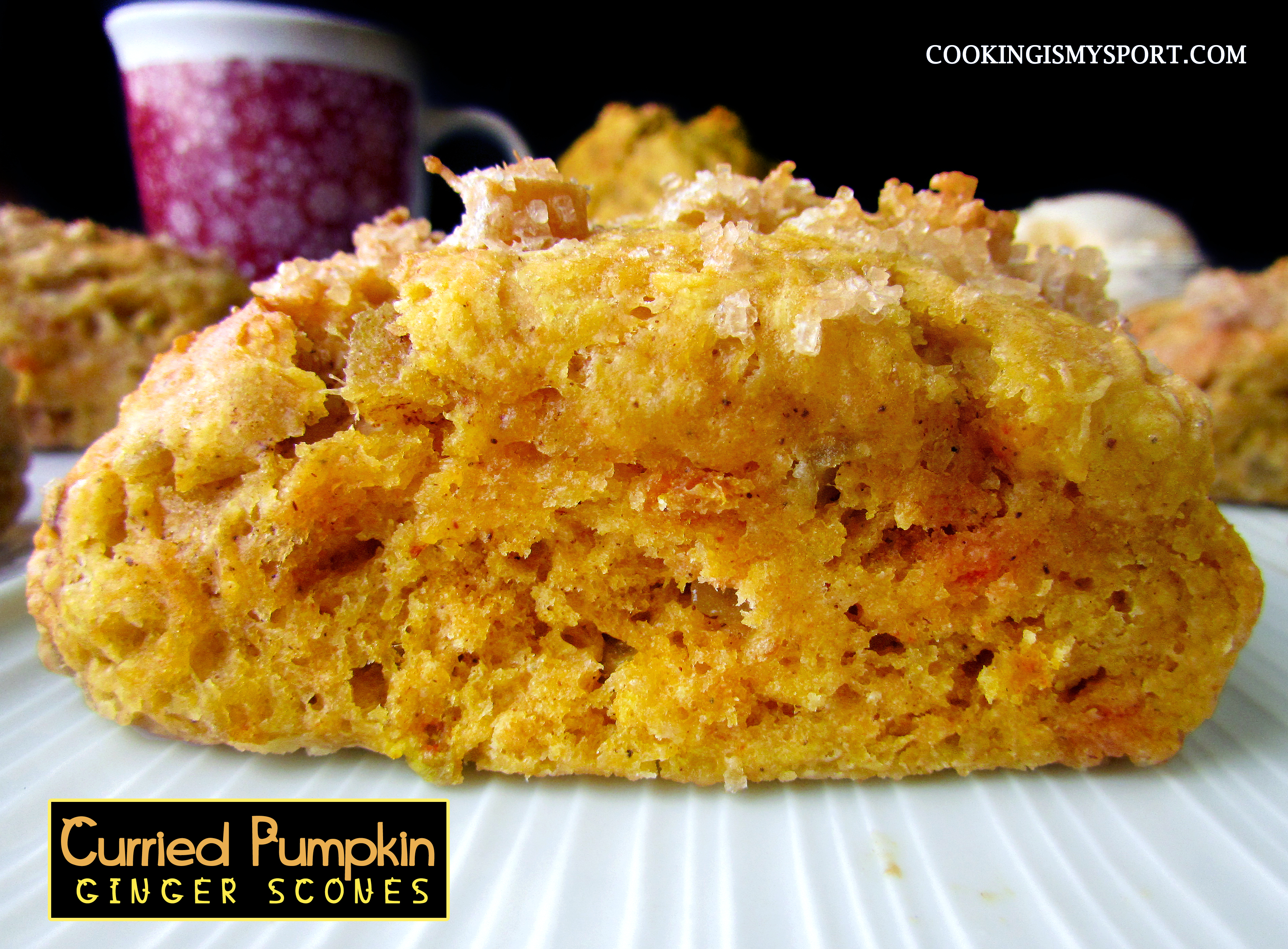 It took me a while longer before my mind changed andI began what’s been a long on-again, off-again relationship with coffee. I’ve been drinking it for about thirteen years (Yeah, I know. You do the math and it’s a long time. I started too early. It is what it is.) Those first two or three years it really wasn’t that serious: I mostly just stuck with the cold slushy-like frappucinos from Starbucks with only a few shots of espresso and are mostly just sugar and milk anyway. But as time went on, I upped my game and went with the real stuff, learning that it’s an acquired taste that may be slow to develop, but once had, is almost impossible to get rid of.

And believe me, I’ve tried to get rid of it. Multiple times. 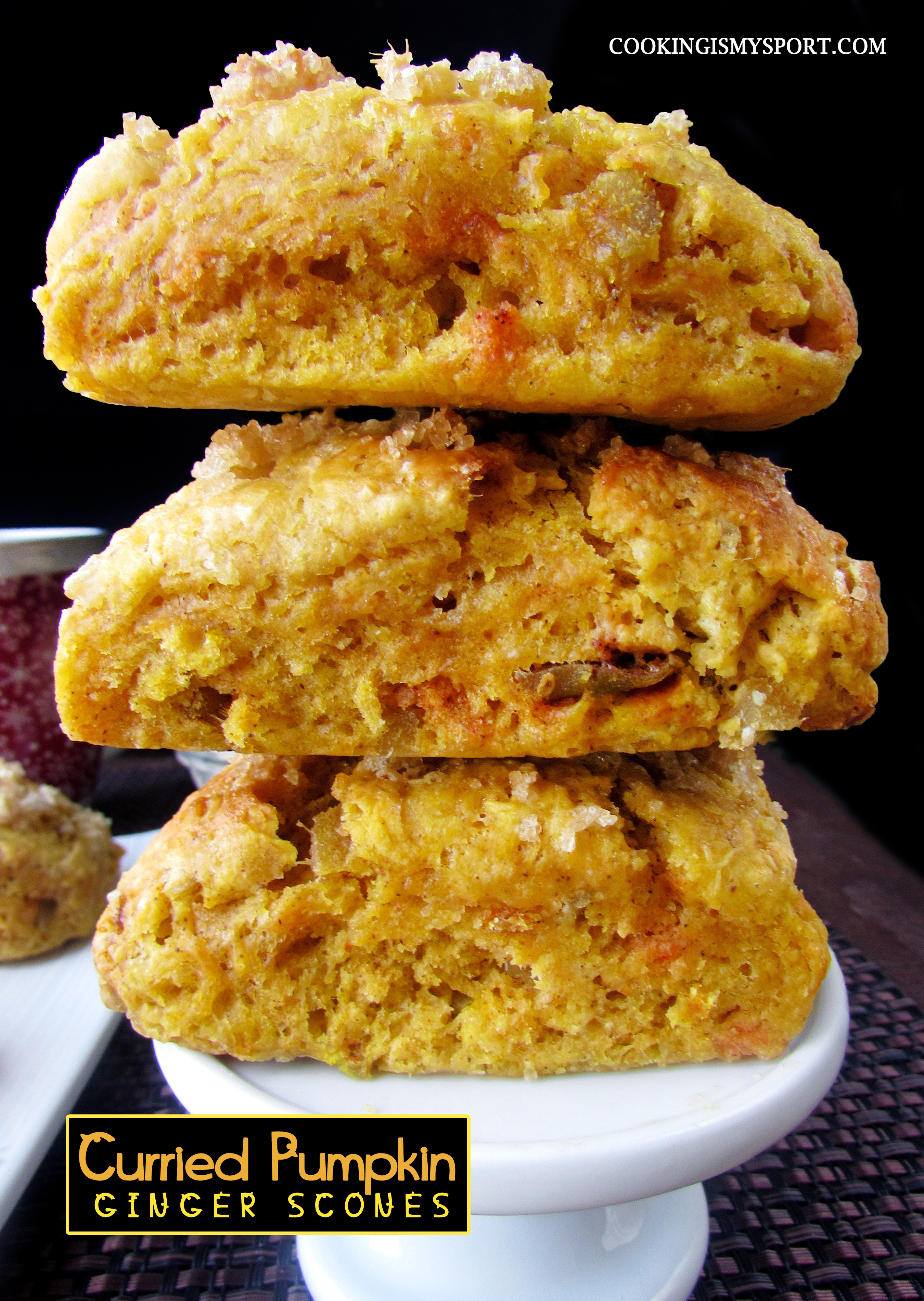 Right now I’m in the midst of another one of my relapses and I’m actually okay with that. Life is short, there worse things in the world to be hooked on and I’m not about to feel guilty over having myself a daily cup of coffee….not to mention a little extra something on the side.

Because honestly, doesn’t the coffee taste that much better when you’re munching on something tasty to go with it? You guys know I’m right. 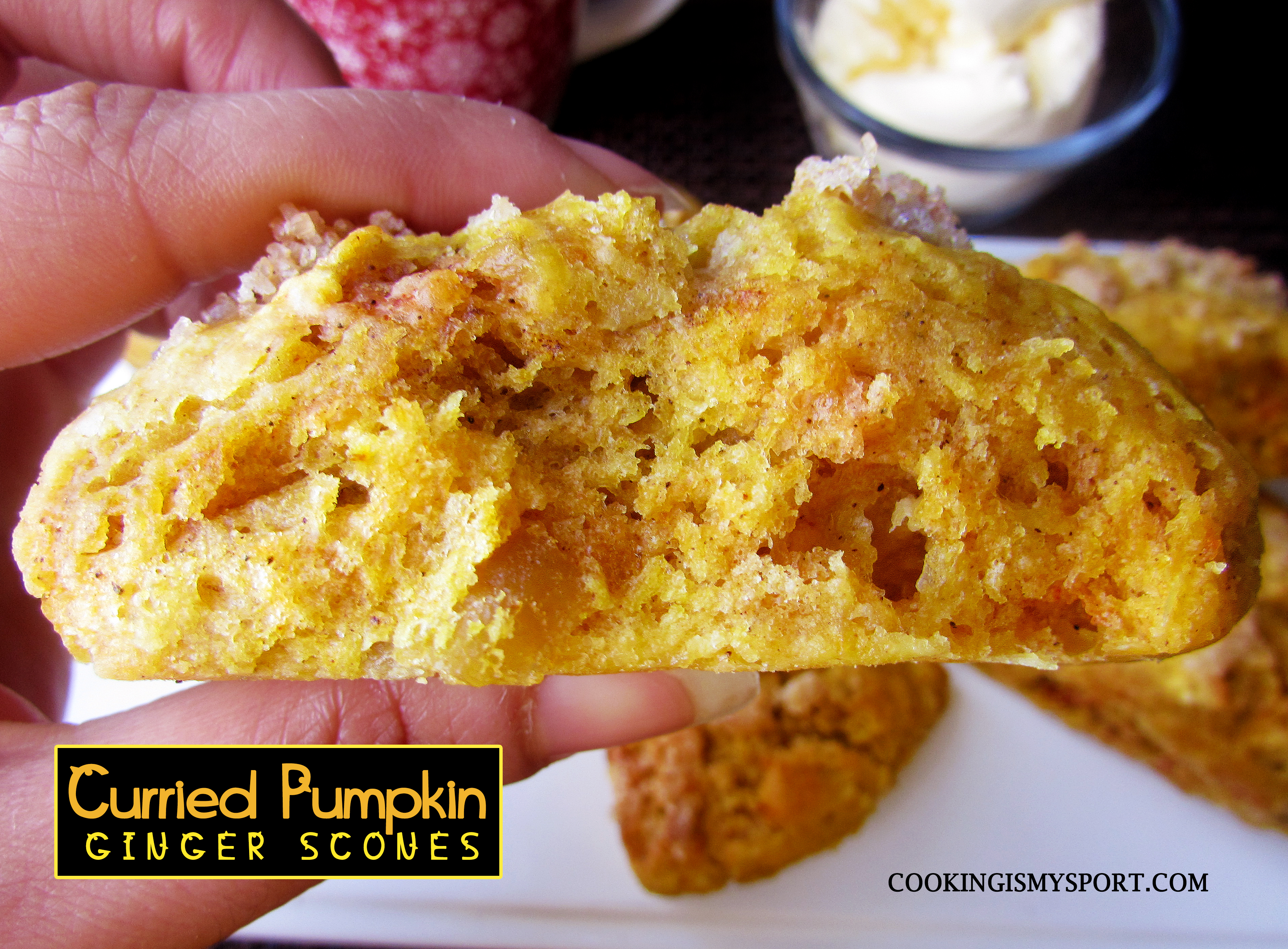 When I’m in a hurry and don’t have time to bake, I like to eat either the spicy Lotus biscuits alongside my coffee, gingersnaps, or some honey-flavored graham crackers. When I’m not in a hurry and do have the time, I’ll make scones. If you guys have been following me for a while you know I’ve got a special love for scones. They’re my favorite accompaniment to coffee and I made up my mind a long time ago to get good at making them for myself so I wouldn’t have to pay $4-5 for one from a coffee shop.

And I have to say, I think I’ve succeeded. 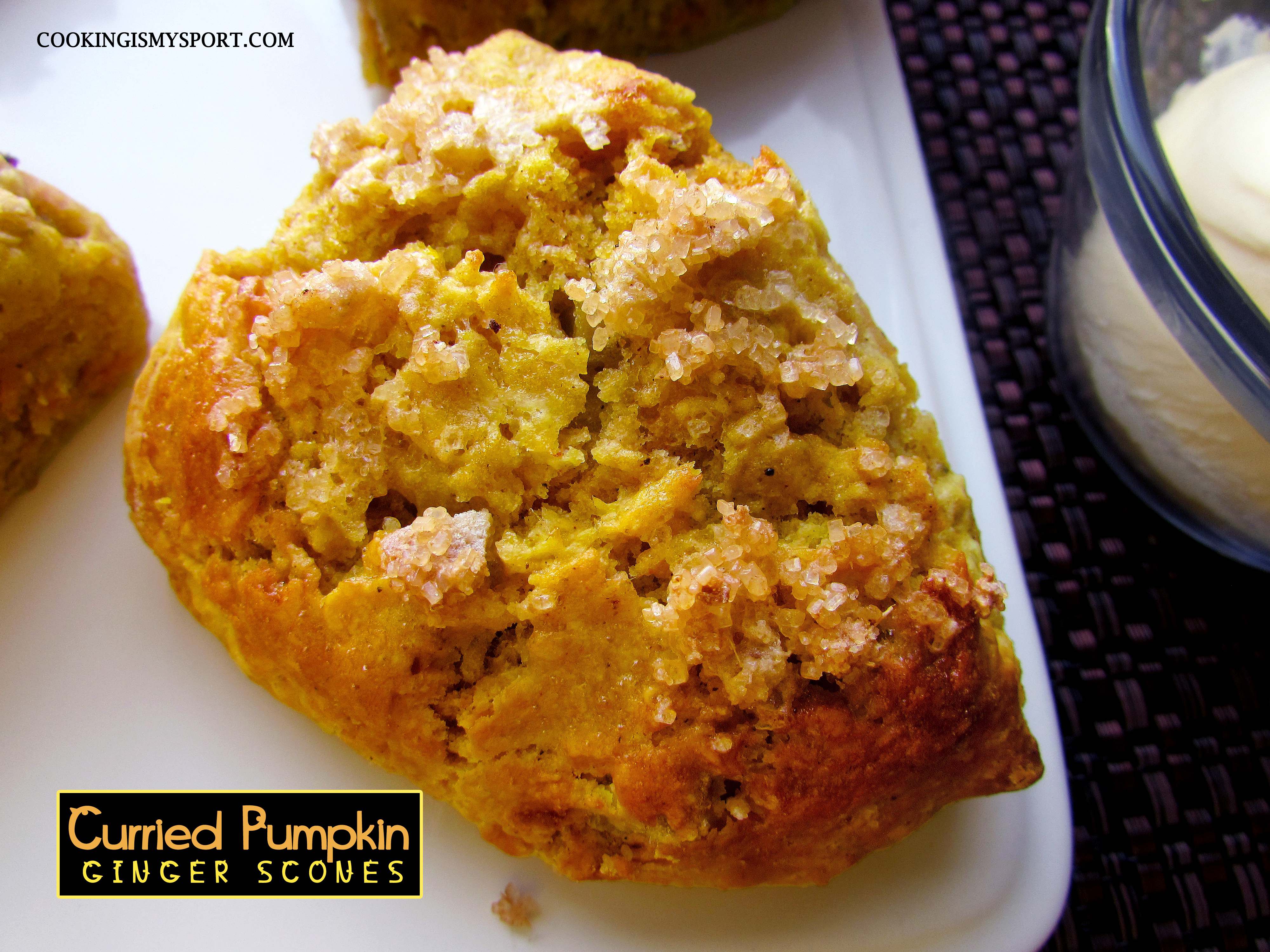 I had a leftover can of pureed pumpkin in my cupboard from Thanksgiving that I never used. I’d also just finished candying some ginger from a batch of ginger syrup I’d made. I didn’t want the pumpkin or the ginger to go to waste, and as they do go together so well, I thought they’d work very nicely in a scone dough. Besides the combination of those two ingredients, there are a few other things I love about this recipe:

It’s given a extra kick of spice by the addition of curry powder and turmeric. I know that those are spices normally used in savory dishes, but trust me: they REALLY do work with the ginger. The bite tempers the sweetness of the scone while the turmeric and the pumpkin also gives them a lovely golden brown color. Second, the crystallized ginger and turbinado adds a layer of chewy/slightly crunchy texture to the top of the scones. I know we’re just now getting into summer, but the smell of these will almost make you wish it were autumn already. I really loved how these turned out and if you try them (even if it’s just to bookmark for later) I think you will too.

Linking this post up to Fiesta Friday #173, co-hosted this week by Lindy @ Love In The Kitchen and Paula @ Her Life Is Love.

In a large bowl, combine the flour, baking powder, baking soda, the 1/2 cup ginger, curry powder, turmeric and sugar. Mix well with a fork and set aside.

Make a well in the middle of the dry ingredients, and pour the pumpkin-buttermilk mixture inside. Using a floured rubber spatula mix together until just combined. (It’s going to be sticky)

On a well floured surface (like a cutting board, pastry mat or a secured piece of wax paper) turn out the dough and pat/roll it into a long rectangle, about  1/2 inch thick. Try to handle as lightly as possible with your hands.

Using a bench scraper, pizza wheel or knife, cut the dough into squares and transfer them to the baking sheet, placing them close together. Place the baking sheet in the freezer for 30 minutes.

Preheat oven to 425 degrees Fahrenheit.  Place a shallow dish filled with about 1 inch of water on the lower rack of the oven about 10 minutes before baking and leave it in there (this will aid with the scone rise)

Brush the scones with the beaten egg and sprinkle with the extra crystallized ginger and turbinado sugar.  Bake for about 20 minutes, until golden brown. Remove from oven and serve warm or at room temp. Scones can be wrapped in plastic wrap to preserve freshness, then reheated by wrapping in damp napkin and reheating in microwave for 15-20 seconds.