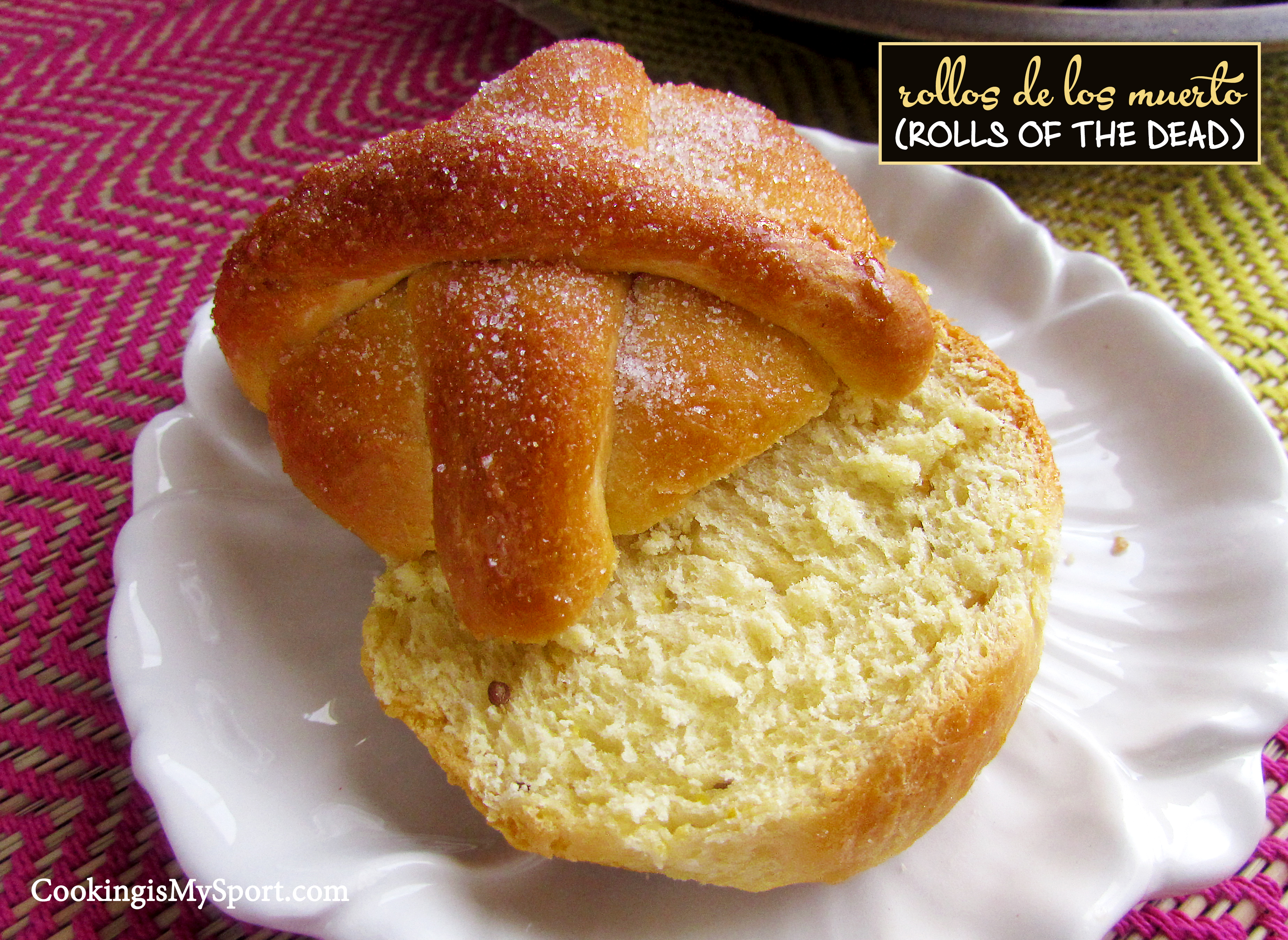 I first heard of & learned about Dia de los Muertos when I was in the eighth grade. There was an assembly where a traveling performance group put on a show for us that was supposed to be about a Mexican holiday in October that when translated into English, was called The Day of the Dead.

Basically, it’s a holiday that honors the passing of loved ones. The indigenous peoples who it originates from believe that on October 31st, the gates of Heaven are opened at midnight and the spirits of deceased children will be able to briefly reunite with their families for 24 hours. The spirits of deceased adults come next on November 2nd. Elaborate altars are made to both remember and honor the deceased loved ones with pictures, delicious food, presents and candles.

I was intrigued by it then and I still am now. I love the idea of a holiday centered around honoring loved ones who have passed away. I love the elaborate, colorful sugar skulls that get decorated and sold. I love the beautiful face makeup designs; works of art in and of themselves , really.

And yes. Of course: I love the food aspect of it too. 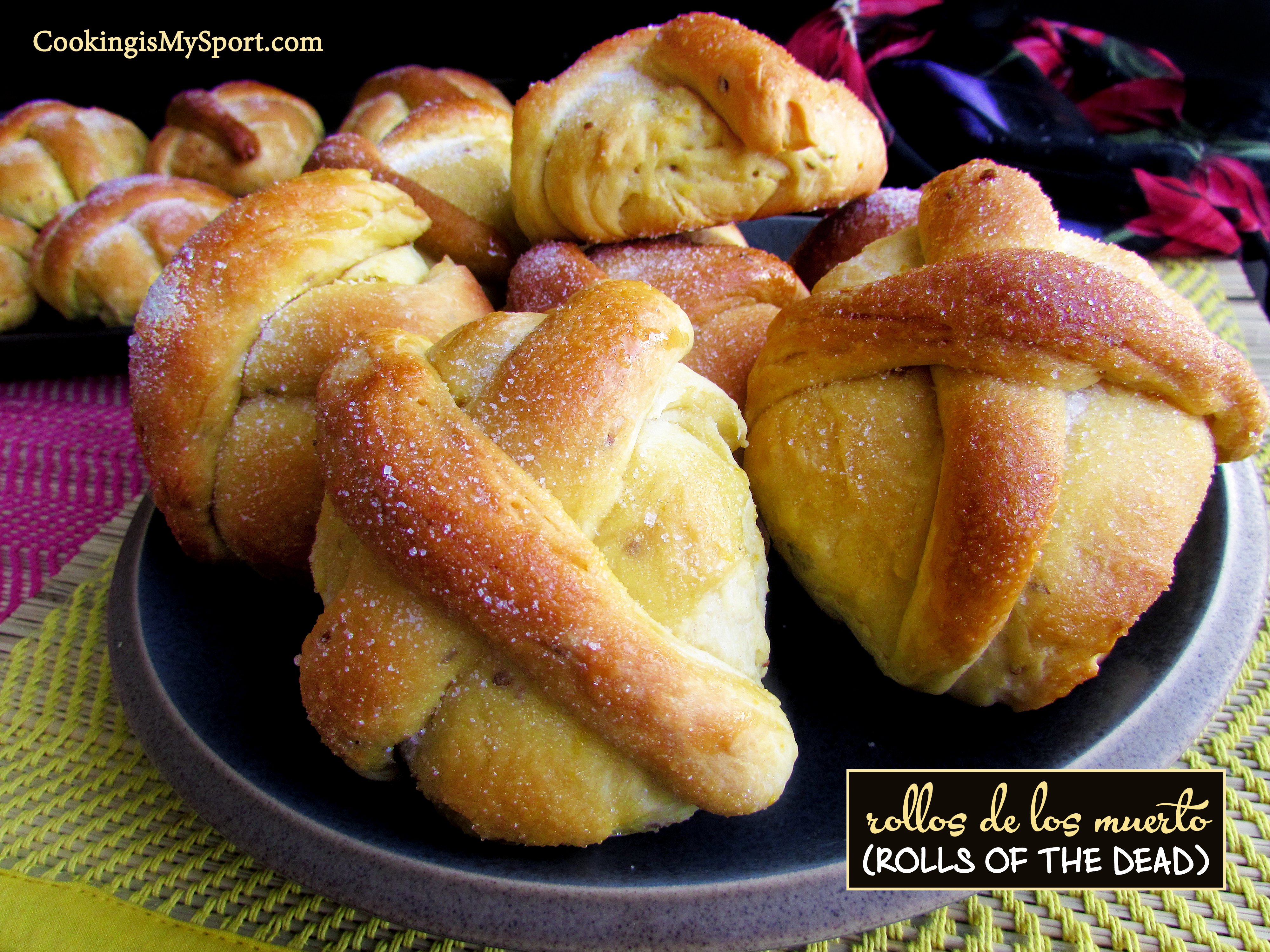 Probably the most well known food from Dia de los Muerto is the Pan De Muerto, translated into English as the bread of the dead. They’re sweet egg breads typically molded into large loaves with shapes of skulls and bones on top.

I made a loaf of Pan De Murerto for the first time two years ago, and posted it on the blog. This year I found myself thinking about it again and how I wanted to give it another go,  this time maybe giving it a different spin. 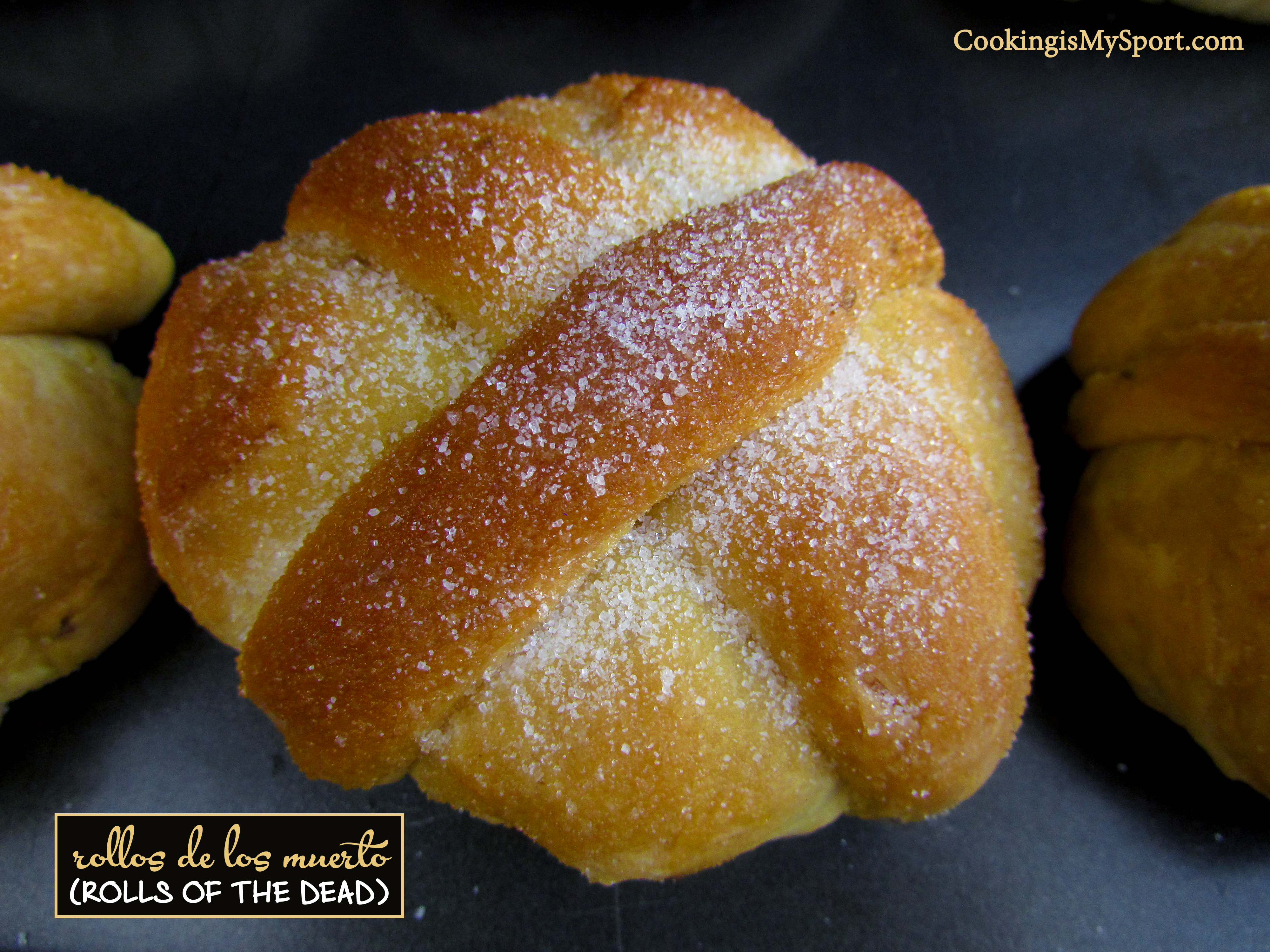 So this year, instead of making one big loaf of pan de muerto, I decided to go ahead and make a batch of rollos de los muerto: rolls of the dead. This is a dough that in my research I’ve seen is often flavored with anise. I included a full tablespoon of anise seeds in mine to really make sure the flavor came through.  Although the original recipe for this calls of orange blossom water, I didn’t have any on hand and to be perfectly honest also didn’t feel like buying an entire bottle of the stuff only to end up using one teaspoon’s worth for just one recipe(because that stuff really packs a punch even in small doses). I found that the cheaper and much more readily available option to most people is just going with the option of using the zest from an entire orange. It isn’t the exact same floral flavor as the orange blossom water, but it’s still nonetheless just as yummy. 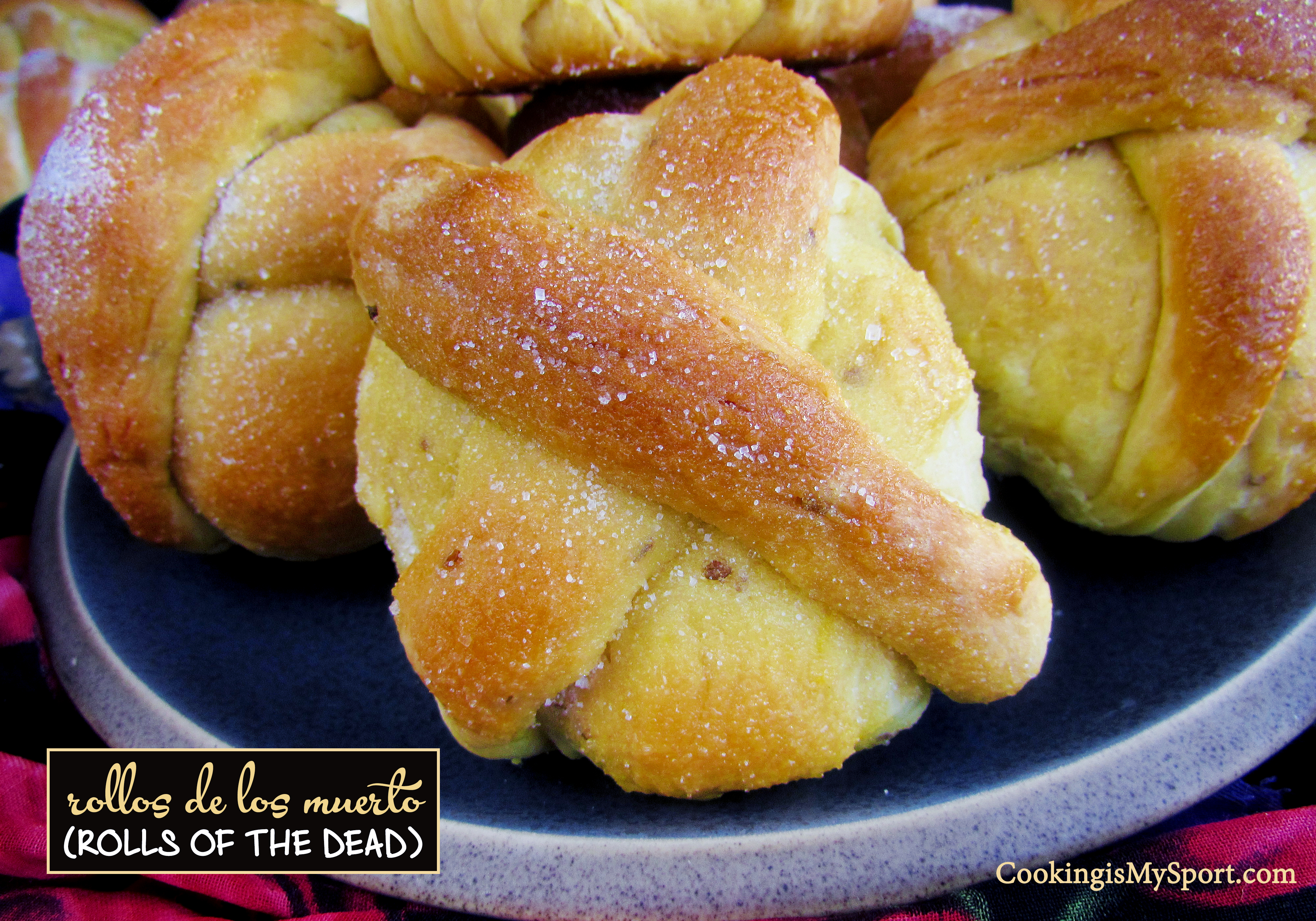 Lastly, most pan de muerto just calls for white sugar to be sprinkled on top of the dough to finish. With this batch of rolls, I decided to add on an orange flavored syrup that gets brushed on them at the very end of their baking, THEN sprinkled with white sugar on top once they’re taken out of the oven. The flavor combination of the anise and orange is one that works EXTREMELY well. The dough has that subtle licorice flavor that’s then given a fresh citrusy aftertaste from both the orange zest and the orange syrup. The white sugar gives it a pleasant crunch on the outside to compliment the soft chewiness of the dough inside.

With shaping, I decided to keep things simple. I rolled out individual balls of dough, then pinched off smaller balls that I split in half to form the crosses. In retrospect I was a bit concerned that they resembled hot cross buns a bit too much. Then I remembered that Hot Cross Buns are made for another holiday that celebrates a resurrection of the dead of sorts. In thinking of it that way, the resemblance seemed kinda ironic.

These really are delicious. The sugar on the top does give a sweetness to them, but they’re not overly sweet. I think they’d still work very well to eat alongside a salad for lunch or even a heavier main course for dinner.

Happy Dio de los Muertos/Halloween, and Fiesta Friday #143, cohosted this week by Judi @ cookingwithauntjuju and Maggie @ Spoon in a Saucepan!!!

Mix yeast, 1/3 cup  of flour, 1/4 cup warm water in the bottom of a standing mixer bowl with a wooden spoon or spatula. Sprinkle 1 teaspoon of white sugar on top. Let it sit uncovered for about 35 minutes, until the mixture is frothy and begins to form bubbles on top.

Whisk eggs, anise seeds, kosher salt, orange zest and 3/4 cup sugar in a medium bowl until the mixture starts to look foamy and sugar is dissolved. Then, add this egg mixture to the yeast starter along with the remaining 5 cups of flour. (Note: don’t add the flour all at once, about 1 cup at a time is what you want to aim for).  Using the dough hook attachment, alternate adding the flour with adding the softened butter, beginning and ending with flour until a soft dough forms, about 5 minutes.

Increase speed to medium and and continue to mix until sugar is dissolved and the dough is elastic, 8-10 minutes.

Take the dough out of the ball and lightly grease the bowl with 2 tablespoons melted butter or canola oil. Transfer dough back to bowl, cover with plastic wrap and a damp towel. Let rise in warm, draft free place until doubled in size, 2 hours.

Punch down onto a well floured work surface. Pinch off a piece of dough slightly smaller than a tennis ball and shape into a round. Pinch off a second piece that is about the size of a ping pong ball, the divide this piece in half. Roll each half into a long rope that will extend over the sides of the tennis-ball dough round. Arrange each rope in a criss-cross  shape over the dough and tuck the ends underneath the ball to keep from shrinking. Place the finished round on the parchment paper.

Repeat the previous step with the remaining dough. Brush the rolls with the 6 tablespoons melted butter, then cover them with plastic wrap and a damp towel. Let rise for 45-minutes to an hour. (Note: they may not double in size during the proofing time, that’s okay. Mine doubled in size while baking.)

Preheat oven to 325 degrees Fahrenheit. While dough is proofing, make the glaze: Combine the sugar and orange juice in a small saucepan over medium heat. Bring to a boil and continue stirring and cooking frequently until it has reduced to a syrup, about 5 minutes. If it bubbles up, just take it off the heat for a few seconds then put it back on. Remove from heat.

Bake the rolls for 20 minutes, then remove from oven. Brush generously with orange syrup then return to the oven for about 5 minutes more. Remove from oven (inner temperature should be 190 Fahrenheit degrees for fully baked rolls), then sprinkle immediately with white sugar so that it sticks. Allow to cool before serving.

30 thoughts on “Rollos de los Muerto (Rolls of the Dead)”