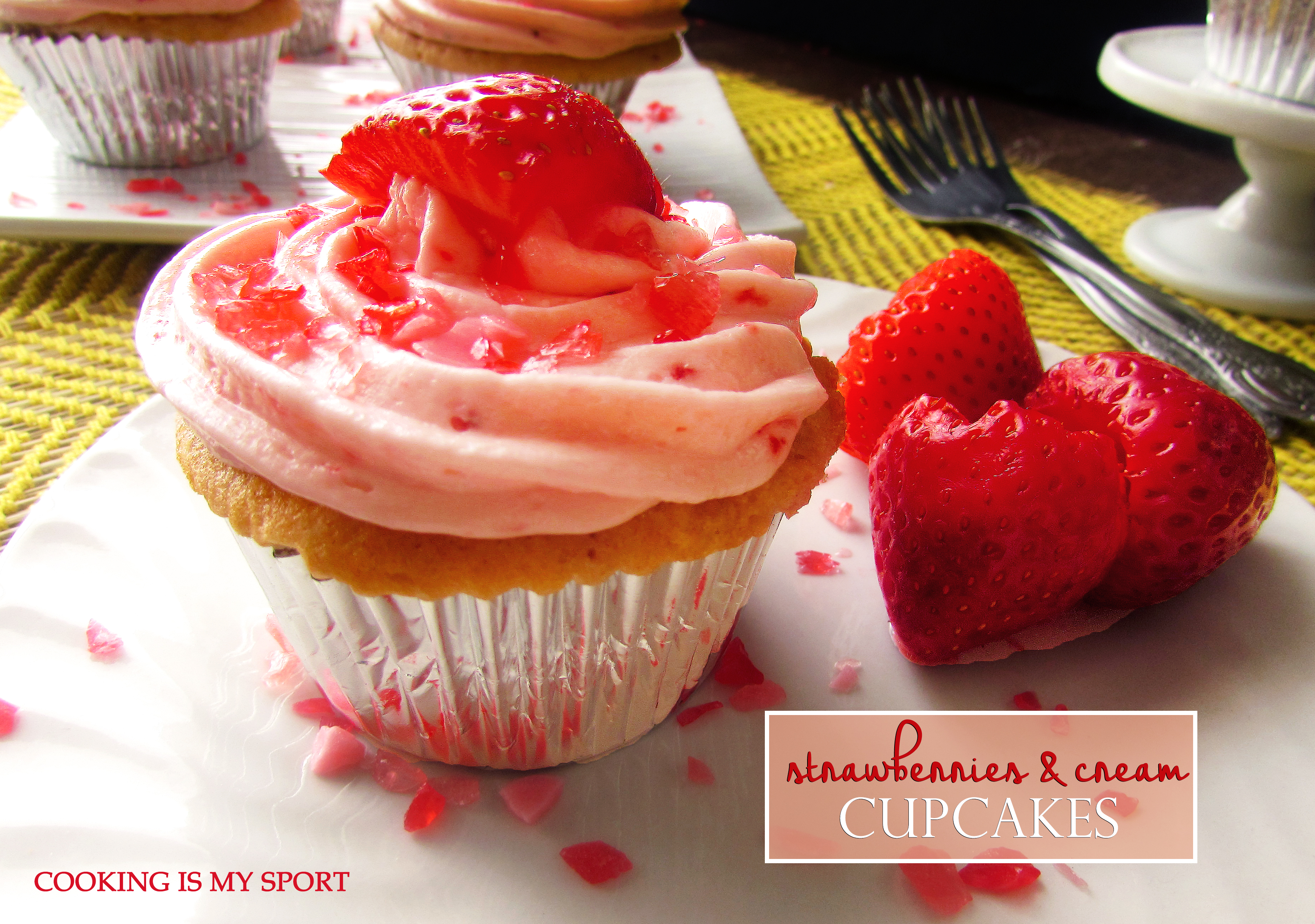 Back in the late 90’s early 2000s the Wrigley/Lifesavers candy company came out with this line of candy that they called Creame Savers.

You guys (at least those of you in the U.S.) remember those?

For those that don’t know about/or remember them, the Creme Saver was similar to a Life Saver in that it was a fruit based hard candy except that the fruit flavor was combined with a cream that gave it a distinctive, rich/thicker texture when you sucked/bit on it. The first flavor that they put out was Strawberries and Creame, but it didn’t take very long before they became HUGELY popular, resulting in a rapid succession of other flavors: Oranges & Creame, Raspberries & Creame, even Chocolate & Creame. There was Creame Savers hard candy, Creame Savers soft chew candy, Creame Savers jello, and even Creame Savers flavored yogurt. 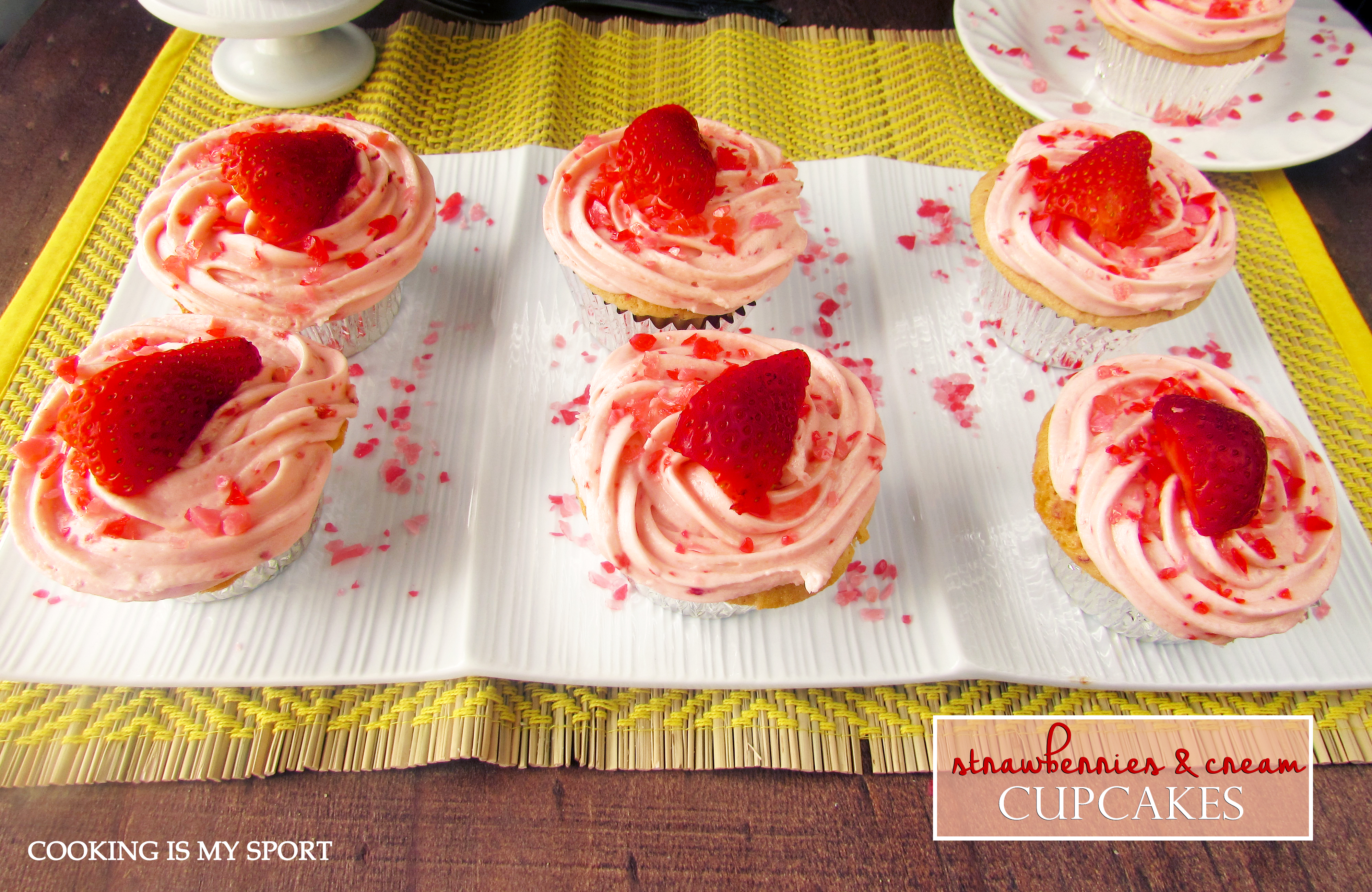 For a while, it seemed like Cream Savers were just everywhere.

Then all of a sudden…they weren’t anymore. From what I understand Wrigly has recently started selling the Strawberry flavor in a new limited release in certain locations, but the Creme Saver craze has definitely died down from what it used to be. I’m not a huge candy fan, but I did like Creme Savers. When I was making today’s recipe, I thought about them and how much the combination of strawberries and cream is just always so much win. 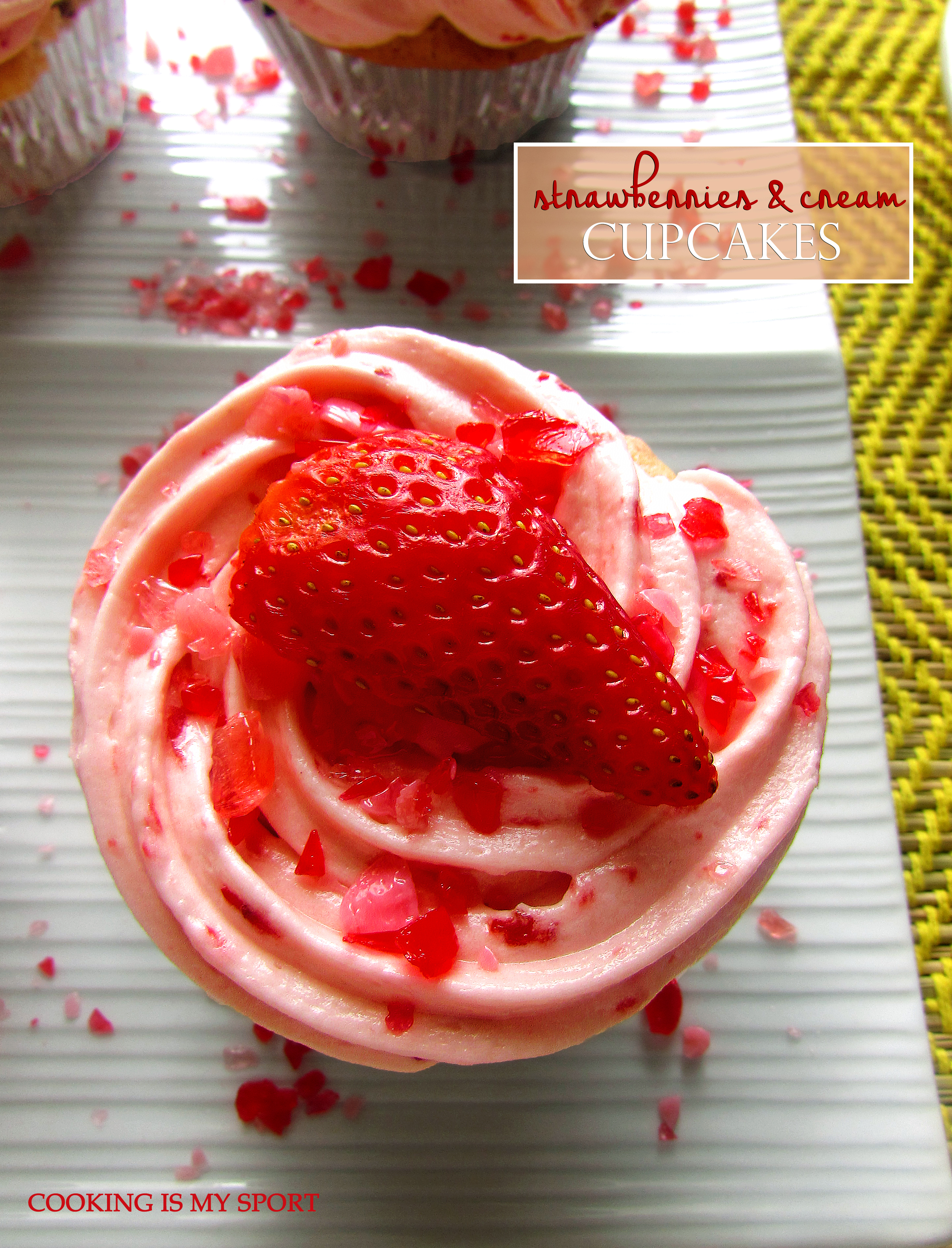 It’s one that was just made for summer. In summers like this when me and my sisters were younger we used to get cans of Reddi Whip whipped cream along with a carton of strawberries from the grocery store. We would wash/hull the berries, get out forks and take turns passing around the can of whipped cream, filling the berry cavities with whipped cream and eating them raw, just like that.

(I maaaaay or may not *still* do this myself sometimes. Maybe. I couldn’t possibly confirm at this time.) 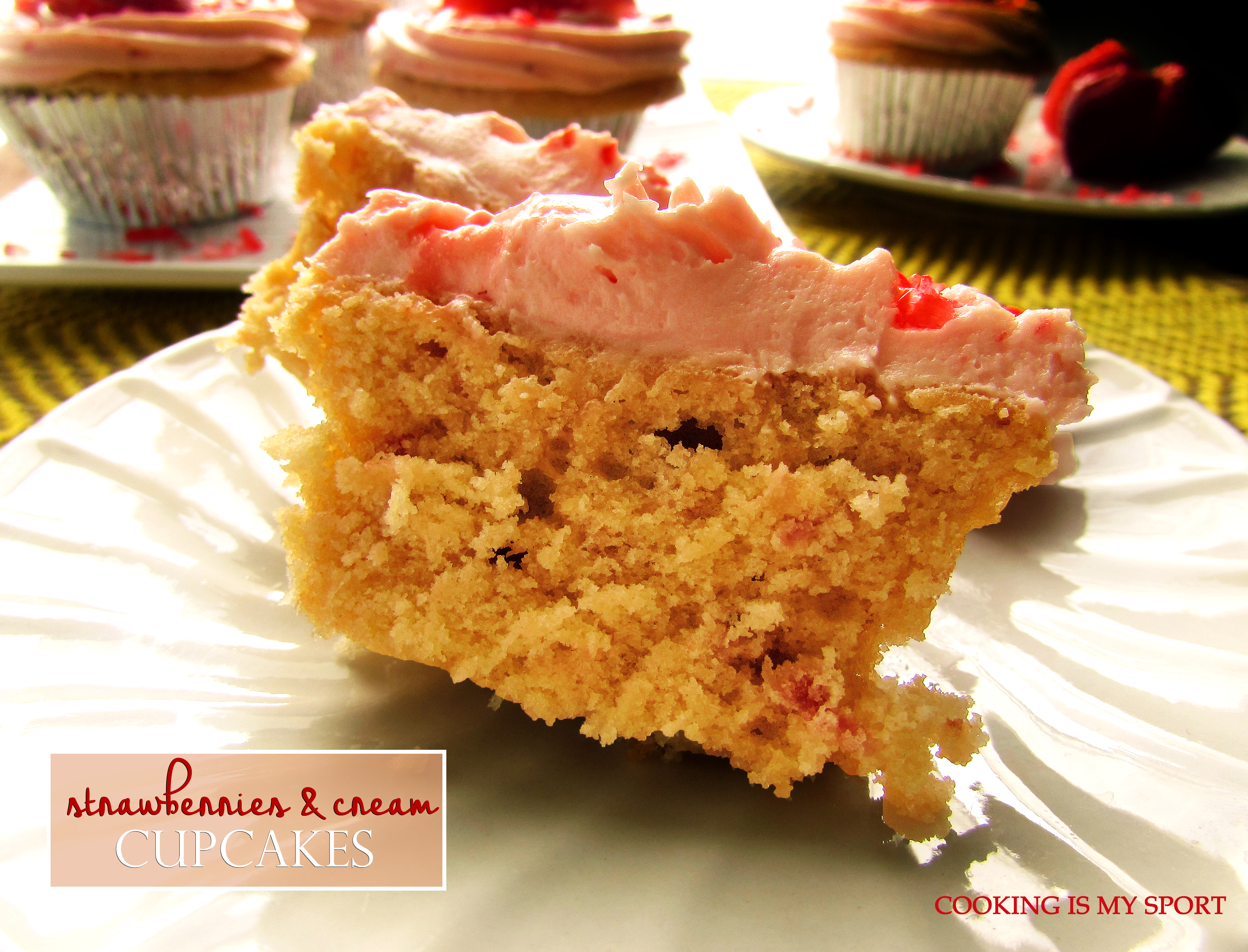 I may have lost my taste for Strawberries  and Creame candy, but I’ll never lose my love for strawberries and cream in shortcake or just all on their own.

Also, strawberries and cream in cupcakes. I will probably nevereverever lose my taste for cupcakes.

And if I ever do, somebody give me two tight slaps and ask me if I’ve lost my mind; the answer in that case would probably be a most definite “yes”. If there are some of you who may unfortunately think you’ve lost or never really had a taste for cupcakes, then don’t worry. I’m not going to give you two tight slaps and ask if you’ve lost your minds; I mean, I could. But I think a much better, more effective solution would be to just present you with these: Strawberries and Cream cupcakes. 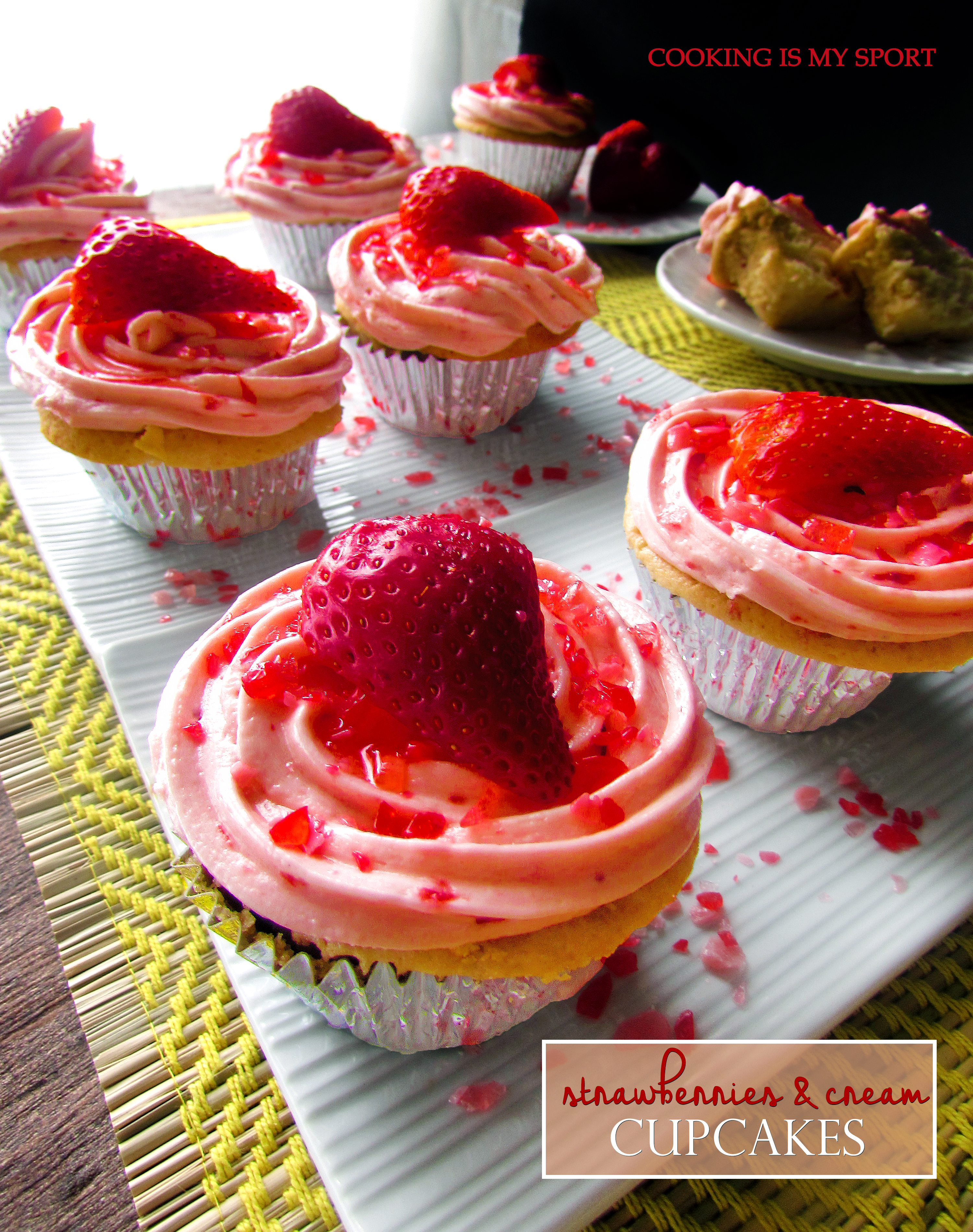 These cupcakes are very simple, no-frills and little fuss… but then, good things in life oftentimes are.

I will say one thing about this recipe though, and that I found that it made slightly more batter than I think is suitable for a 12 muffin cup pan. I tried containing it to just 12 cupcakes and what ended up happening was that before baking, the liners were fuller than what I was comfortable with. As a result, I had some spillage which is why the finished cupcakes settled a little flat rather than having domed tops. While that definitely didn’t affect the taste, it is a detail I think is worth pointing out. I think maybe just using 2 or 3 extra more muffin cups would produce the best results 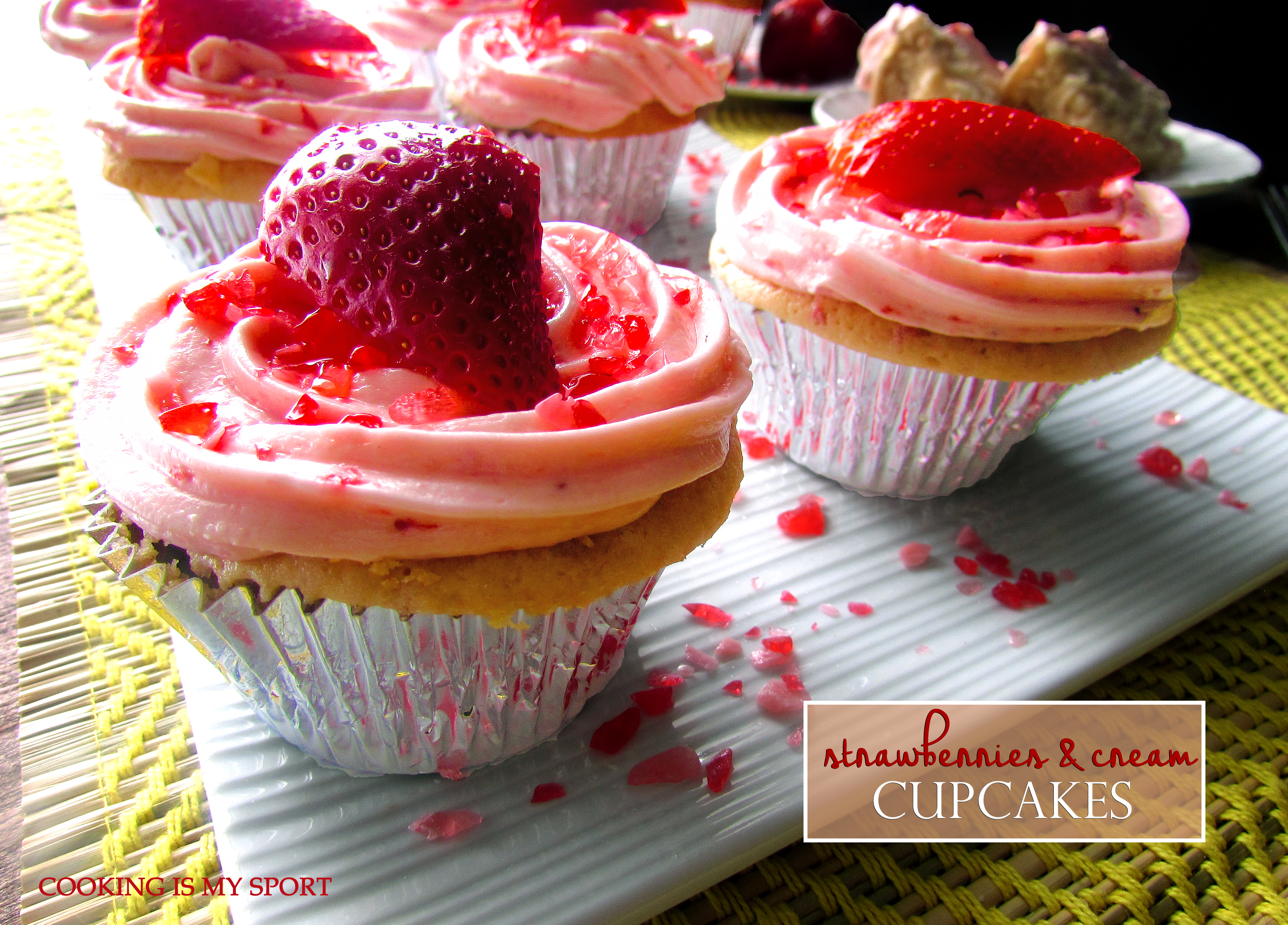 So, as I said before, this a very simple recipe. You can make these from start to finish in the space of about 1.5 hours. However, don’t let you think that that means the taste is simple.

The secret weapon in this recipe is the use of the fresh strawberry puree. It adds that tart strawberry flavor to the vanilla based-batter while also balancing the sweetness of the frosting beautifully, somehow managing to make it taste light and airy–the texture is actually very similar to whipped cream. Plus, doesn’t it make them look so pretty-in-pink?

I’ll be at the Fiesta Friday #130 party this week with these cupcakes. You should come out and get one while I’ve still got ’em.

Preheat oven to 350 degrees Fahrenheit and line a 12-cup muffin pan with liners.

Combine the flour, baking powder and salt together in a medium size bowl with a whisk or a fork and set aside.

Cream the butter and sugar together until light and fluffy in a standing mixer on medium high speed. Add the eggs (one at a time) and the vanilla.

Puree the strawberries until smooth. Add all EXCEPT 1/4 cup to the cupcake batter. Set aside the 1/4 cup in small bowl.

Carefully add the flour mixture to  the batter in medium increments until fully incorporated, alternating with the 1/2 cup of milk. (It’s best to start and end with the flour) Don’t over-mix.

Divide the batter evenly among the muffin cups. Bake until tops spring back, 20-25 minutes. Transfer to baking rack and let cool 5 minutes in the pan before removing the cupcakes and letting them cool completely.

Beat the butter, confectioner’s sugar and salt with a mixer on medium speed  until just combined. Add the vanilla and beat on medium high until creamy, about 3 minutes. Add the milk and 1/4 cup of strawberry puree beat for about 1 minute more until fluffy.

25 thoughts on “Strawberries and Cream Cupcakes”