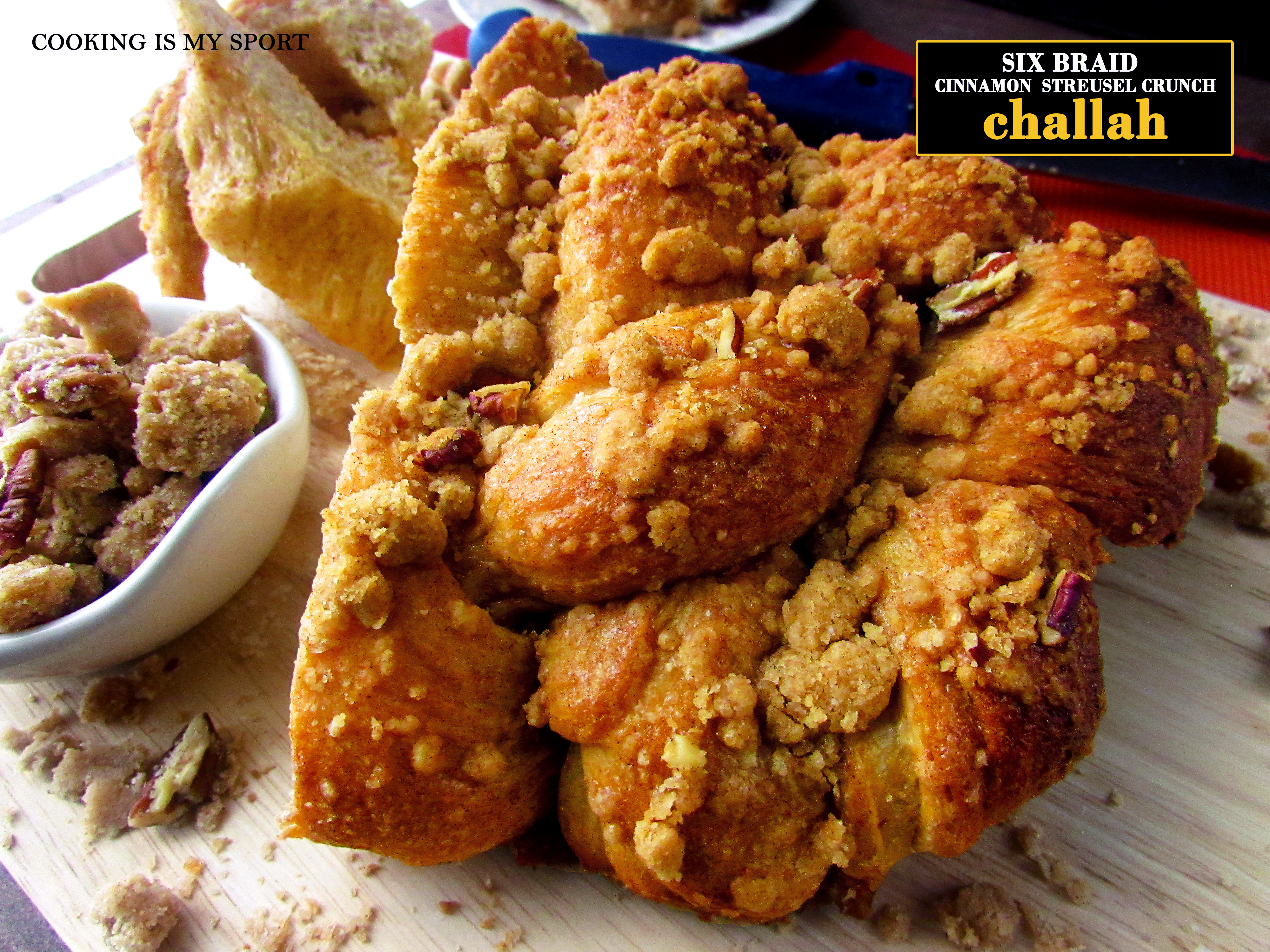 Where do I even START?

Well, off the bat I guess I can begin with sending a huge apology to all my followers who celebrate Passover. This post is probably the LAST thing you want to see as we approach a holiday that’s supposed to make the leavened stuff off limits. 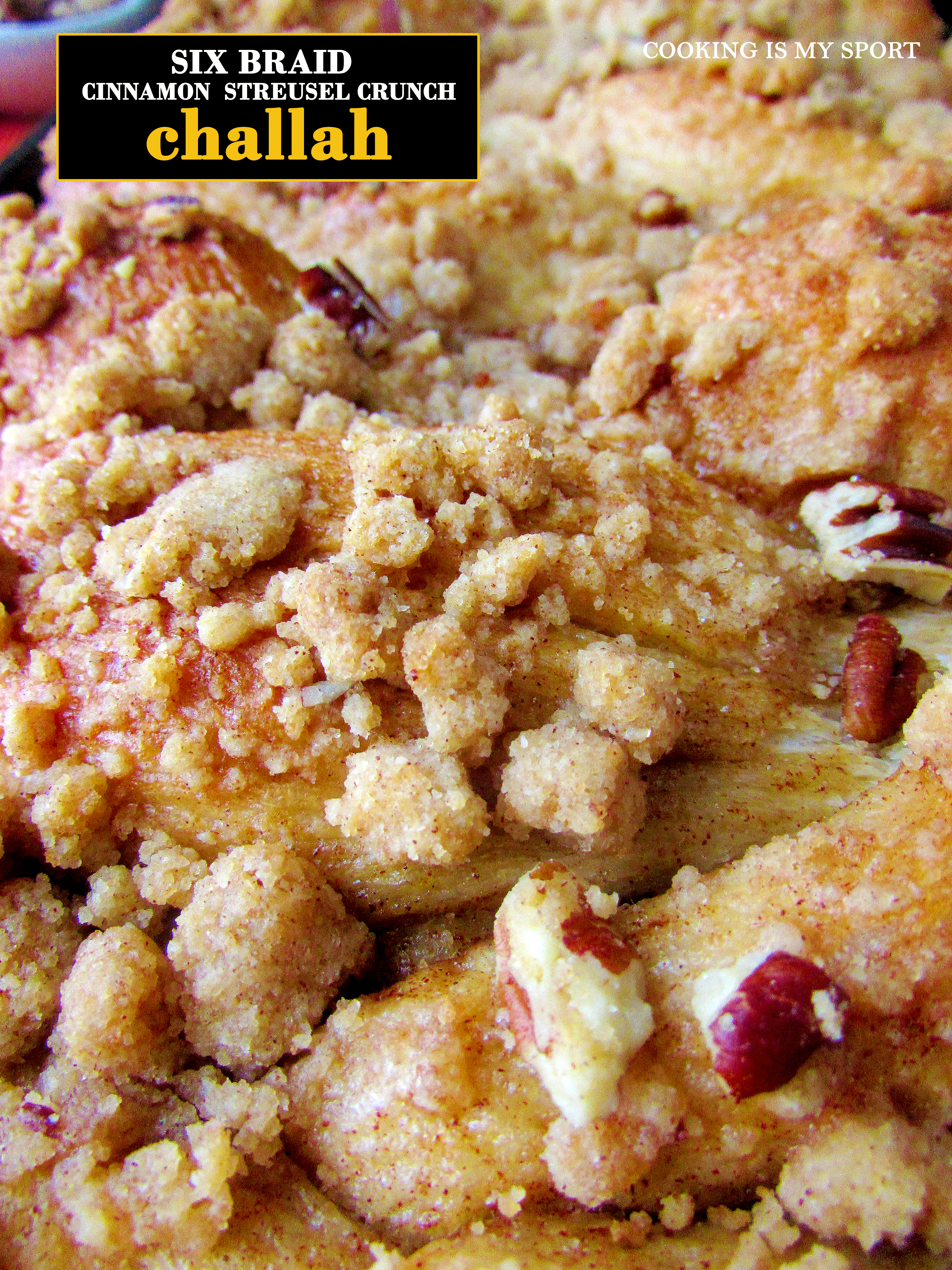 But to the rest of us who don’t, just pop a squat and let me chew your ear off about this bread.

It’s definitely one of the more ambitious undertakings I’ve encountered in the kitchen, but ever since the idea for it popped into my head a few weeks ago, I couldn’t stop thinking about it. Still, I was slightly intimidated and paranoid that this would be one thing I couldn’t successfully pull off. After all, the most I’ve ever attempted in challah is three braids that I usually wind into a round and bake in cake pans. This would involve much more labor not just in braiding, but also nailing the outer topping that I wasn’t even sure would work with the texture of the bread. 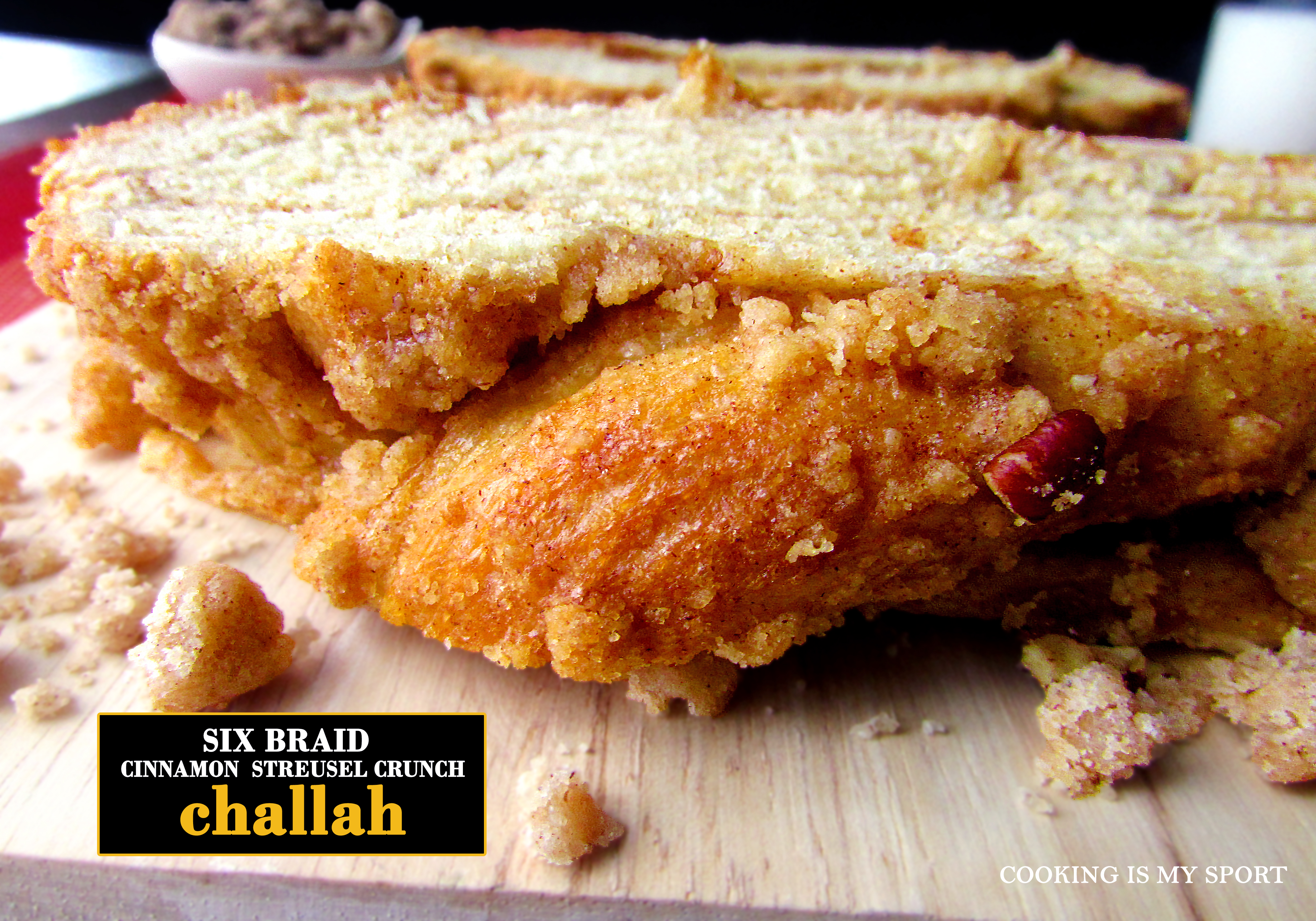 So when Easter came around, I decided to put it off and make Pane di Pasqua instead. It turned out beautifully.

But I STILL wanted to try and see if I could pull this off; a six braid challah that I dipped in cinnamon sugar, then sprinkled with a cinnamon streusel on top.

So this past week, I sat down and started planning. I remembered a similar brioche recipe I’d seen done at another food blog and decided that if she could successfully pull it off with brioche (a more temperamental dough by far), then I could almost definitely be able to make this work with challah, particularly the laid back/fail-proof/go-to recipe I’ve been using for the past four years or so. 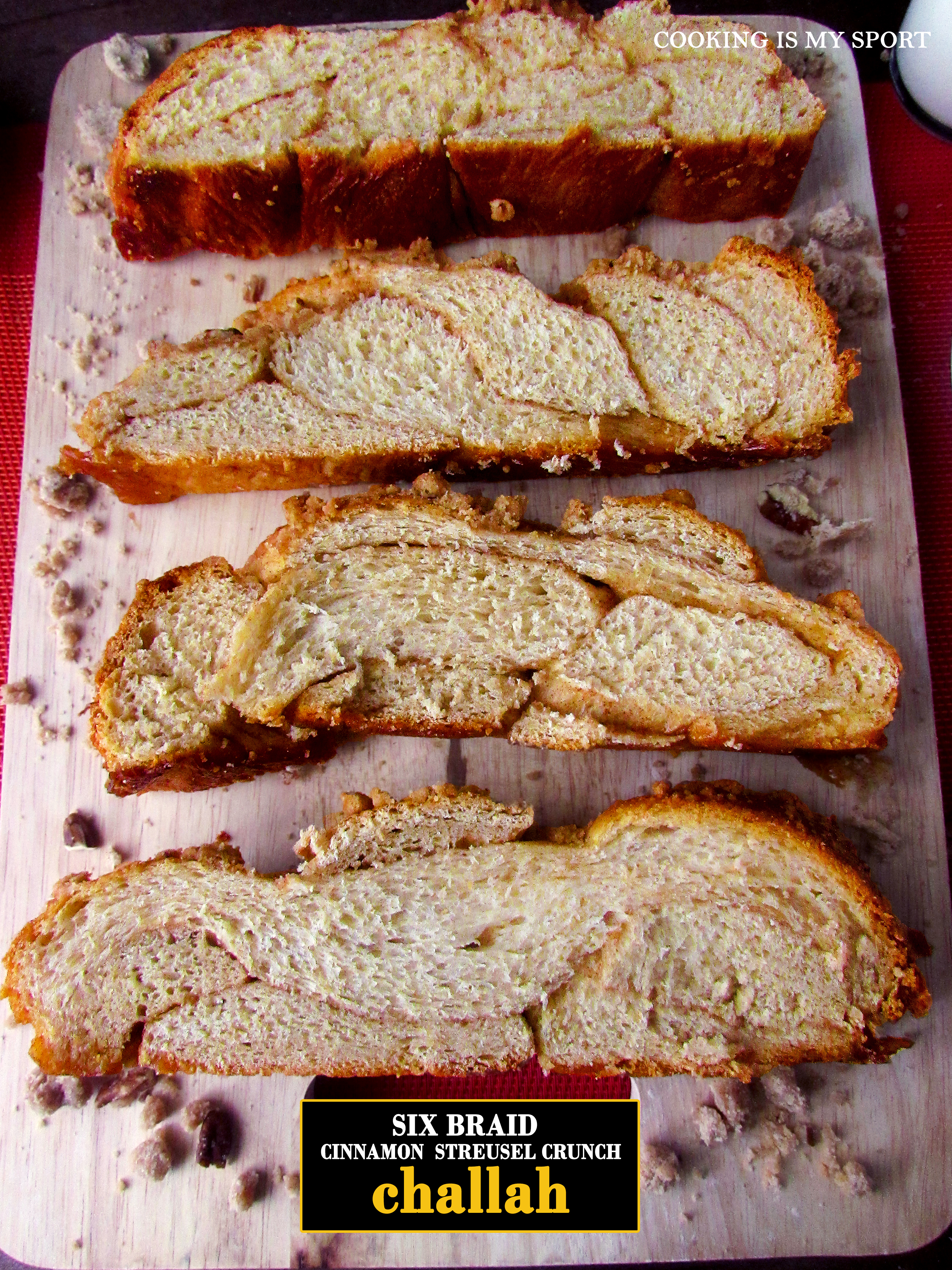 I did decide to make one key revision to that recipe though, and I have to say it was a random decision that REALLY made all the difference. I swapped out one cup of all  purpose flour in the dough for one cup of whole wheat flour. This was a wonderful idea, as it gave a distinct but subtle earthy nuttiness to the dough that complemented perfectly with  all the sweetness you’re gonna get from the ‘rest’ of it.

And ohhh, the rest of it.

If challah can be improved at all, then it’s got to be when you dip it in cinnamon sugar and sprinkle it with a buttery cinnamon streusel topping. The chewiness of the bread combined with the crunch of the pecan streusel is a mouthgasm of epic proportions.

And when you just HAVE to eat it warm/hot because you just can’t wait any longer for it to cool down after taking it out the oven? Guys. 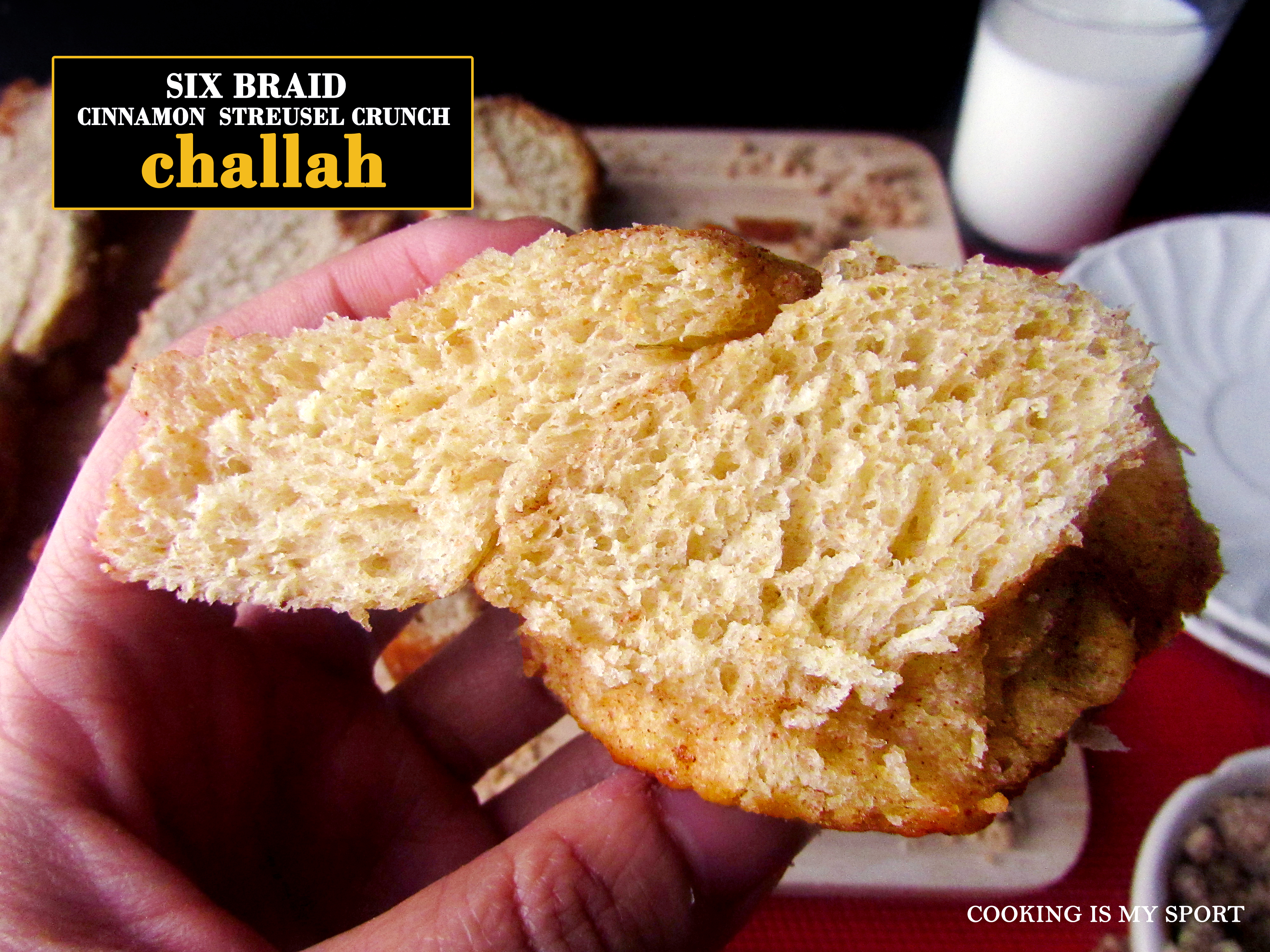 I know it may seem like an overload to make this a six braid challah, but in retrospect I can’t see making it any other way. The thing is, the more braids there are, the more of the cinnamon sugar coating that gets wound into the center of the loaf itself. Check out the layering on the inside; you can’t get that with just three braids. You gotta put in the extra work to get all that goodness.

And yes,I know six braids is daunting. It was for me too at first. But as I instruct in the recipe, a simple google search can be your best friend in getting those six braids wound together all nice and pretty.

Just make sure you find the how-to pic/video and have it handy BEFORE you get your hands smeared  messy with melted butter and cinnamon sugar. (Don’t ask why I’m telling you that. It’s not relevant.) 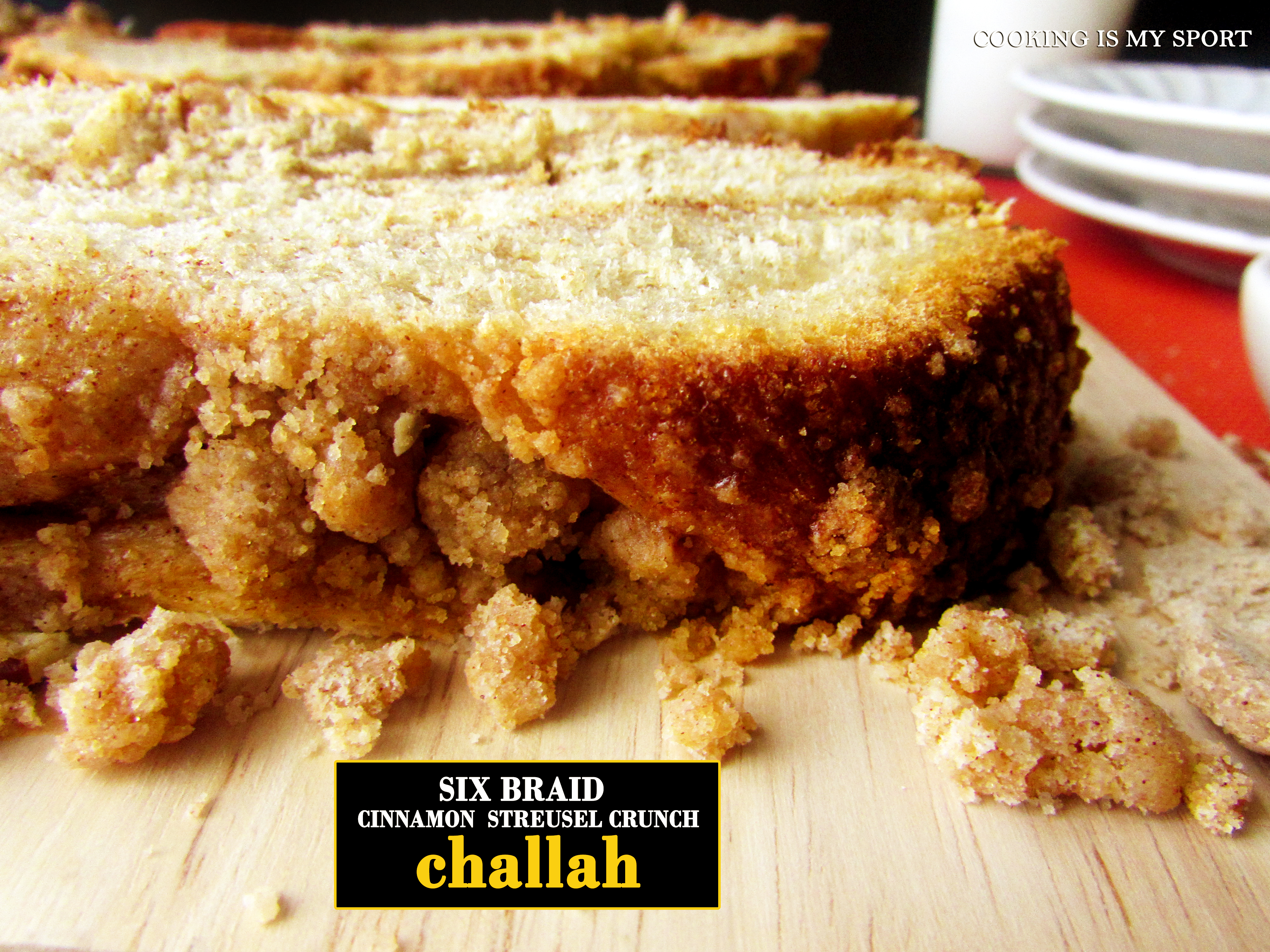 There is one thing I have to put out there: this recipe yields two HUGE loaves of challah. You will have two HUGE six braid cinnamon streusel crunch challahs on your hands by the time you finish. Just let that sink in. ‘Cause that’s a lot of bread.

I also refuse to be held responsible for what should happen if you don’t feel the imperative to share the wealth with some friends/family. I know I did. Because I’m not stingy. And because I still want to fit in my jeans.

I’ll leave you with one last thought just in case you weren’t completely sold on making this bread for yourself: Cinnamon Streusel Crunch Challah French Toast

Aaaaand how about one more time with a full-body shot? 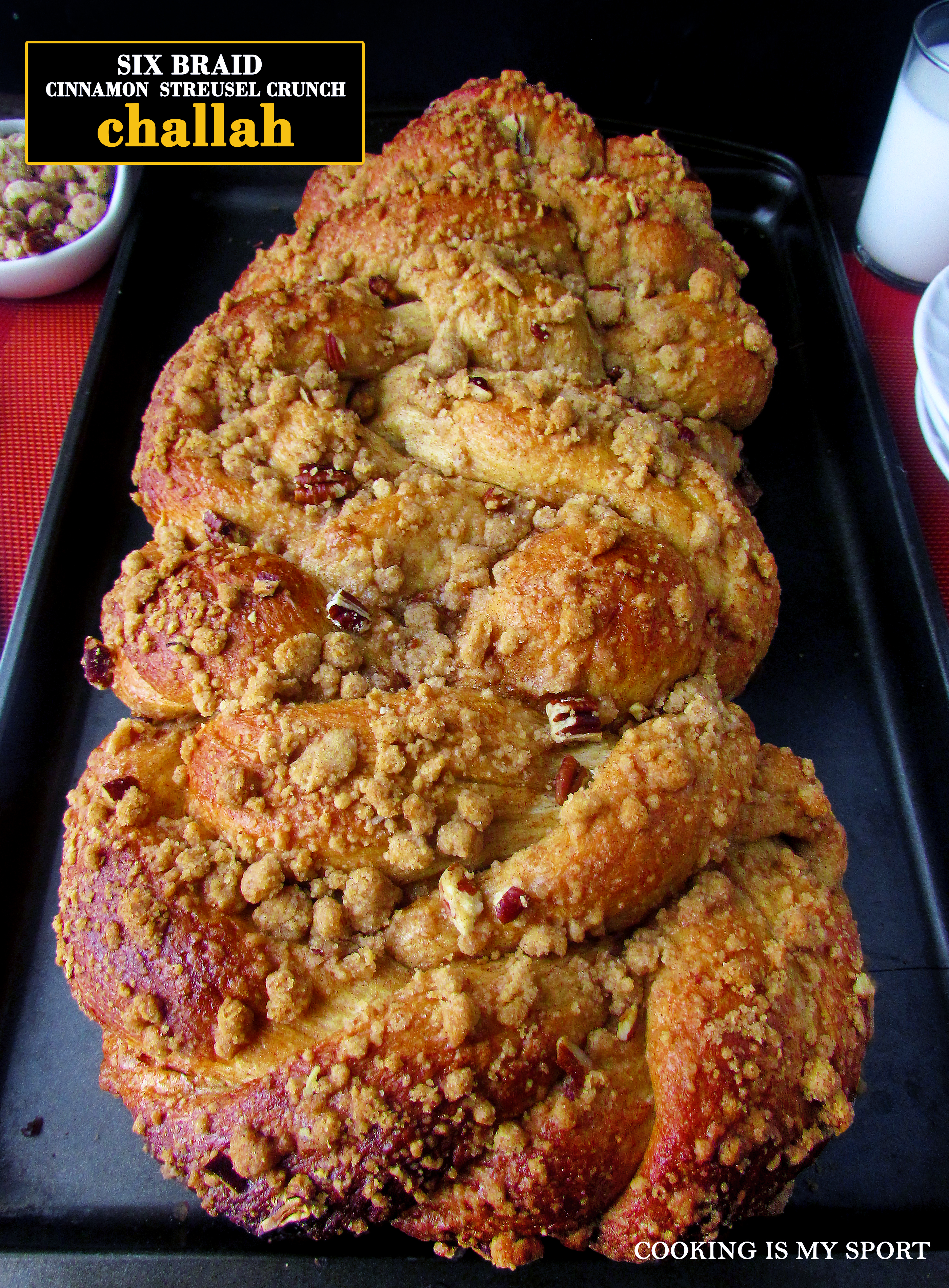 Follow the heavenly smells and bread crumbs I’m leaving behind me to the Fiesta Friday #115 party where we’re being hosted by  Julie @ Hostess At Heart and Ashley @ Too Zesty.

Recipe Adapted from Allrecipes.com and Half Baked Harvest

Mix the all purpose and whole wheat flour together in a medium bowl. In a large bowl, sprinkle yeast over barely warm water. Add 1 tsp of white sugar and let it stand for about 10 minutes until yeast is proofed and puffy.

Beat honey, oil, the 2 eggs, and salt into the yeast mixture. Add the flour one cup at a time, beating after each addition, graduating to kneading with hands as dough thickens.

Knead until smooth and elastic and no longer sticky, adding flour as needed. Cover with a damp clean cloth and let rise for 1 1/2 hours or until dough has doubled in bulk. Towards the end of the rising period, make the cinnamon sugar coating: pour the melted butter and vanilla extract in a shallow dish. Mix the brown sugar and cinnamon together in a shallow dish as well.

Punch down the risen dough and turn out onto floured board. Divide in half and knead each half for five minutes or so, adding flour as needed to keep from getting sticky.

Divide each half into six pieces and roll into long snake about 1 1/2 inches in diameter. Using a pastry brush, brush the melted vanilla-butter over both sides of the ropes. (You can also just dip it in the butter if you don’t have a pastry brush, just try and shake off the excess.) Then using your fingers, sprinkle the brown sugar mixture thoroughly over the ropes until they have a good coating. Don’t be shy with it, this is gonna get a little messy. Save the leftover melted butter and brown sugar as well- you’ll use it later.

Pinch the ends of the six snakes together firmly and braid from middle. You can google ‘Six Strand Challah Braid’ as I did and find MANY resources that will help you through this process.

Grease two baking trays and place finished braid on each. Cover with plastic wrap, then a damp kitchen towel and let rise about one hour.

To Prepare the streusel: pour the melted butter into the brown sugar and add the all purpose flour, salt and pecans. Stir with a fork until it forms small clumps. Let it sit for about 30 minutes until firm; you may also want to refrigerate it for about 15 minutes depending on how long you let your braids rise.

Preheat oven to 375 degrees F (190 degrees C). Take your braids and lightly spray them with a coating of PAM baking spray. Gently sprinkle and press the streusel into the top of the challah braids until there is a generous coating over each.

(Note: you ARE probably going to have leftover streusel. Don’t throw it away! After your bread is done baking, simply spread the leftover streusel out on a parchment lined sheet pan and bake it on its own in the oven for about 10-15 minutes until golden brown. Use the excess to sprinkle on top of ice cream or yogurt; or you could just eat it all on it’s own.)

Bake the challah loaves at 375 degrees F for about 40 minutes. Inner temp should be 195 F-200 F and the bread should have a nice hollow sound when thumped on the bottom. Cool on a rack for at least one hour before slicing.