I used to be a pretty diligent breakfast eater, but as of late I’ve really fallen off the wagon with it. Whereas I used to get up early to make sure I got my breakfast sandwich all warmed up or my cereal and yogurt packed to take with me to work, the truth nowadays is that I give myself a pat on the back if I don’t sleep through my alarm and get myself dressed and out of the house in enough time to stop by the coffee shop for my mandatory latte. 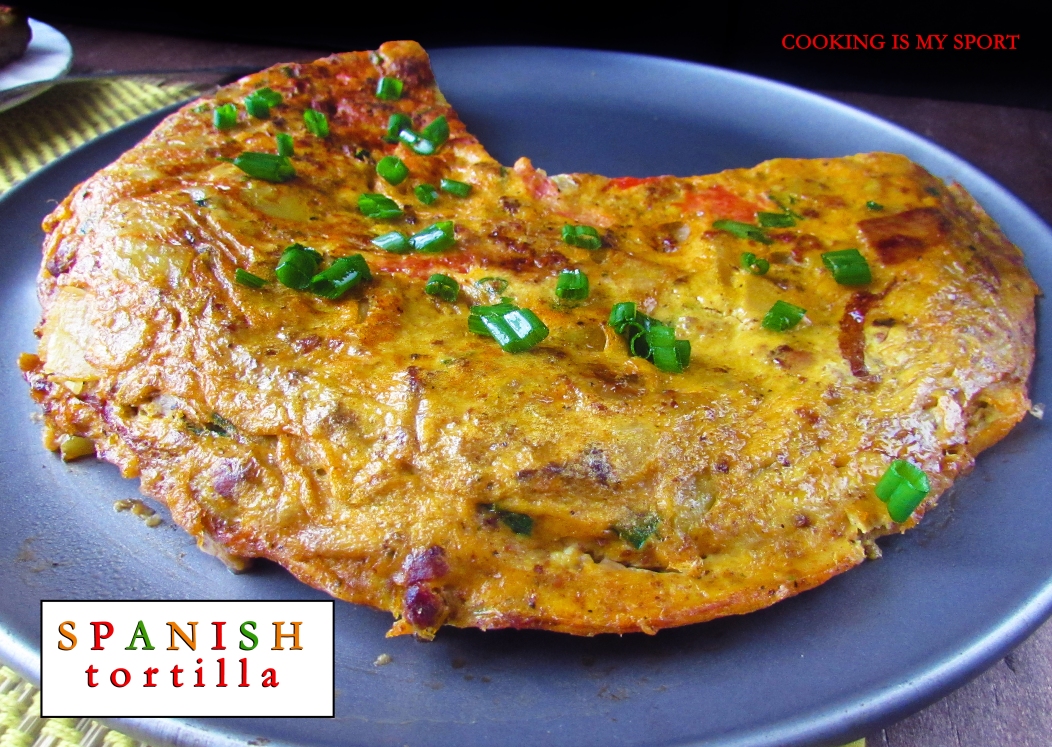 Yet despite my negligence for the meal itself, I’ve never lost my love of breakfast food. Sometimes me and the family will truck out for a weekend brunch, but not too often. Then inevitably, I’ll see some picture or recipe online or on television featuring breakfast food and suddenly I get mad at myself for skipping out on it so often now.

Lately I’ve been getting cravings to have breakfast for dinner more often in lieu of typical ‘entree’ dishes. Instead of chicken or roast or stew, I find myself craving cereal & milk, pancakes, waffles, biscuits smeared with jam, sausage and (of course) omelettes. So for the past two weeks or so, I’ve been eating breakfast food for dinner pretty regularly. Today’s dish is one of those dishes, and I knew the first time I made it that I wanted to share it on the blog with all of you guys.

When I first came across the recipe, the name was somewhat of a mystery to me; when I think of a ‘tortilla’, I usually imagine some kind of flour or corn tortilla being involved in there somewhere. (Which, I know probably betrays a lot of my inexperience in Mexican cooking). The interesting thing about this dish is that there’s really no flour or corn tortillas involved in it at all. But that definitely doesn’t take away from the taste; so far as I’m concerned they can call this thing whatever the heck they want to, it is GOOD.

Don’t flip out on me guys, but this was actually my first time cooking with chorizo. I’ve eaten it before of course, but never bought and used it as an ingredient before in my own kitchen. I can safely assure you that I’ll be certainly be using it frequently from here on out, particularly in my omelettes. Chorizo and eggs are a match made in Heaven; the smoky flavor of the meat works so well with the blank canvas of the eggs. The addition of the Yukon potatoes in the tortilla really helps to ‘bulk’ it up and make it even more filling and hearty. 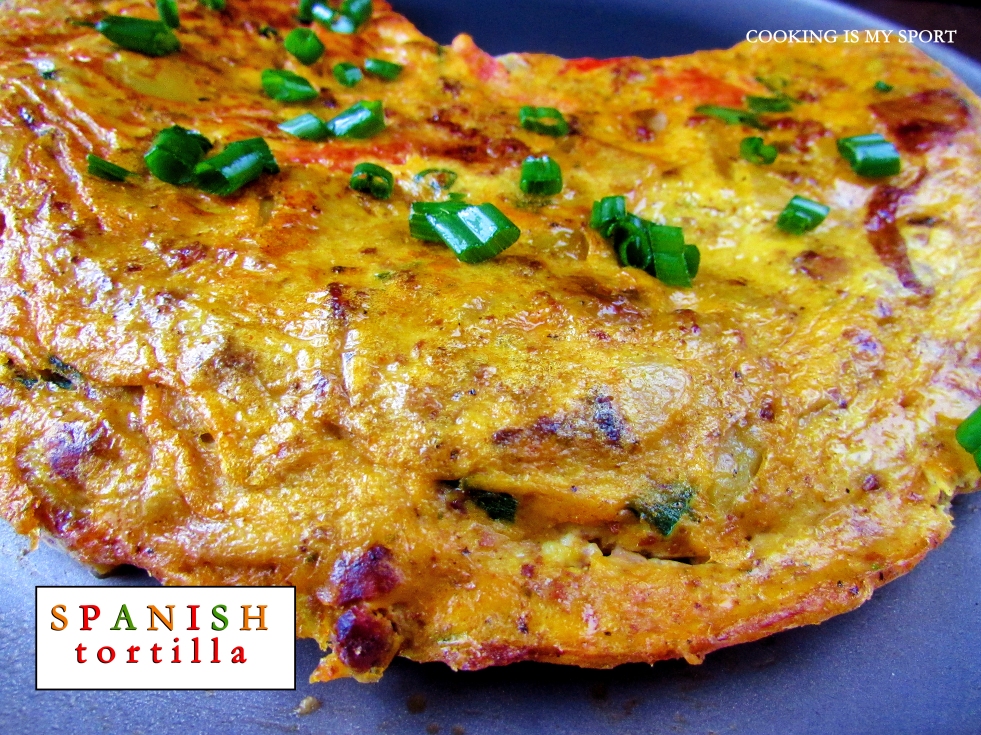 There’s really only one tricky part to pulling this dish off, and that’s the part where you have to turn the tortilla over in the skillet as a whole to finish cooking the other side. Don’t flip out: so long as you have a decent non-stick skillet, a large rubber spatula, and a large plate set to the side, you can easily pull this off. Follow the recipe directions, be patient and careful with your wrist action and you’ll be fine.

I ate a wedge of this Spanish tortilla with salsa and Frank’s Red Hot sprinkled on top with two slices of buttered/jellied toast on the side for a DELICIOUS Breakfast for Dinner meal.

Heat 1 tbsp of the oil in a 10-inch nonstick skillet over medium high heat and add the chorizo, stirring occasionally until the chorizo is browned and the fat as rendered, about 5 minutes. Remove from the skillet to a small bowl and set aside.

Toss 4 tbsp of the oil, the potatoes, onion, 1/2 tsp of the salt and the pepper in a large bowl until the potato slices are thoroughly separated and coated in oil. Heat 2 tbsp more oil in the 10-inch nonstick skillet over medium-high heat until shimmering. Reduce the heat to medium-low, add the potato mixture to the skillet, and set the bowl aside (do not rinse). Cover and cook, stirring occasionally with a heat-proof rubber spatula, until the potatoes offer no resistance when poked with a paring knife, 22 to 28 minutes. (some slices may break into smaller pieces, but that’s ok).

Meanwhile, whisk the eggs and remaining 1/2 tsp salt into the reserved bowl until combined. Using a heat-proof rubber spatula, fold the hot potato mixture, red peppers, chorizo and scallions into the eggs until combined, making sure to scrape all of the potato mixture out of the skillet. Return the skillet to medium high heat, add the remaining 1 tsp oil and heat until just beginning to smoke. Add the egg-chorizo-potato mixture and cook, shaking the pan and folding the mixture constantly for 15 seconds; smooth the top of the mixture with the heat-proof rubber spatula. Reduce the heat to medium,cover and cook, gently shaking the pan every 30 seconds, until the bottom is golden brown and the top is lightly set, about 2 minutes.