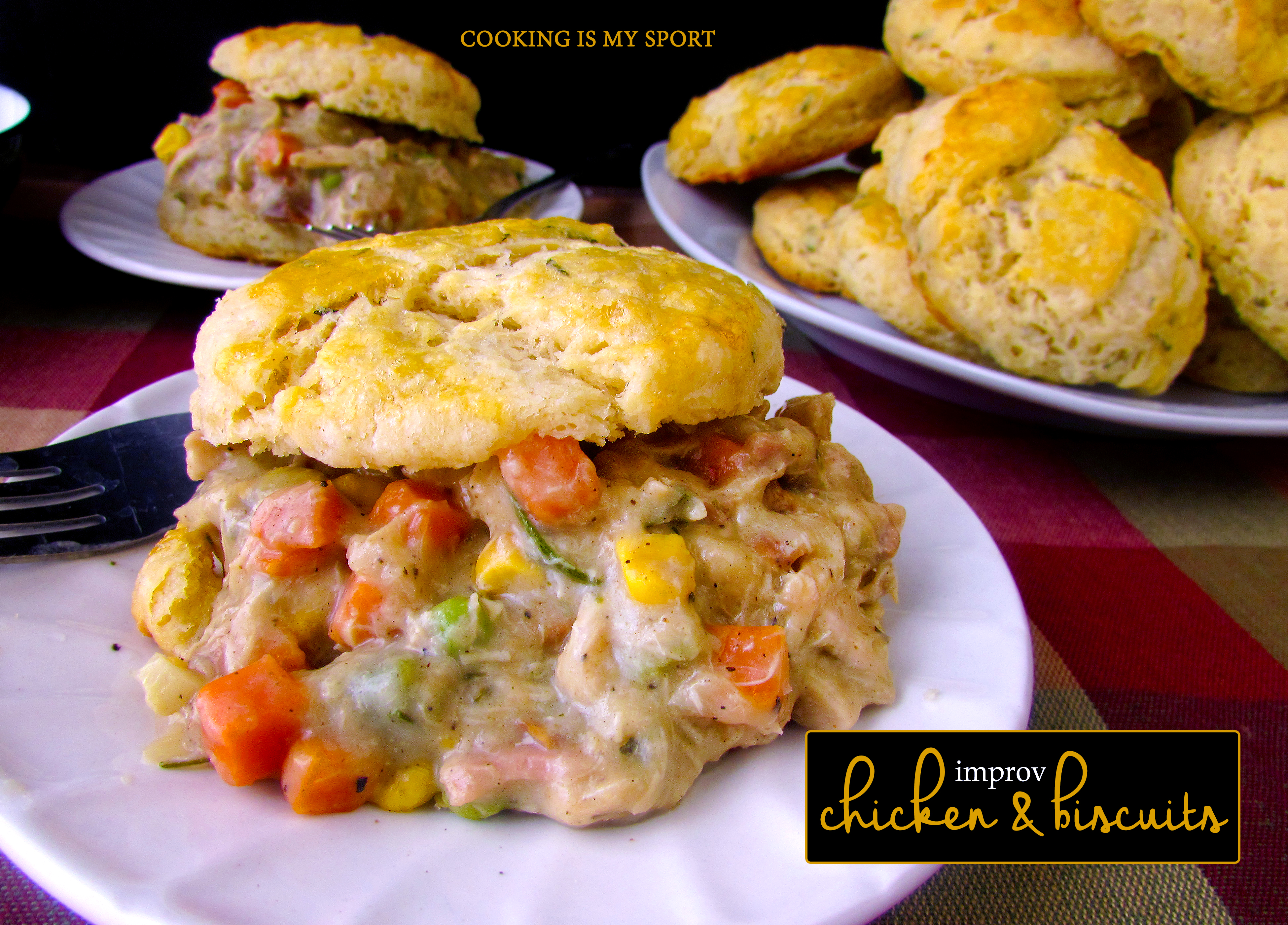 I think I should start this post off by being completely honest about something:

This was supposed to be a different dish. 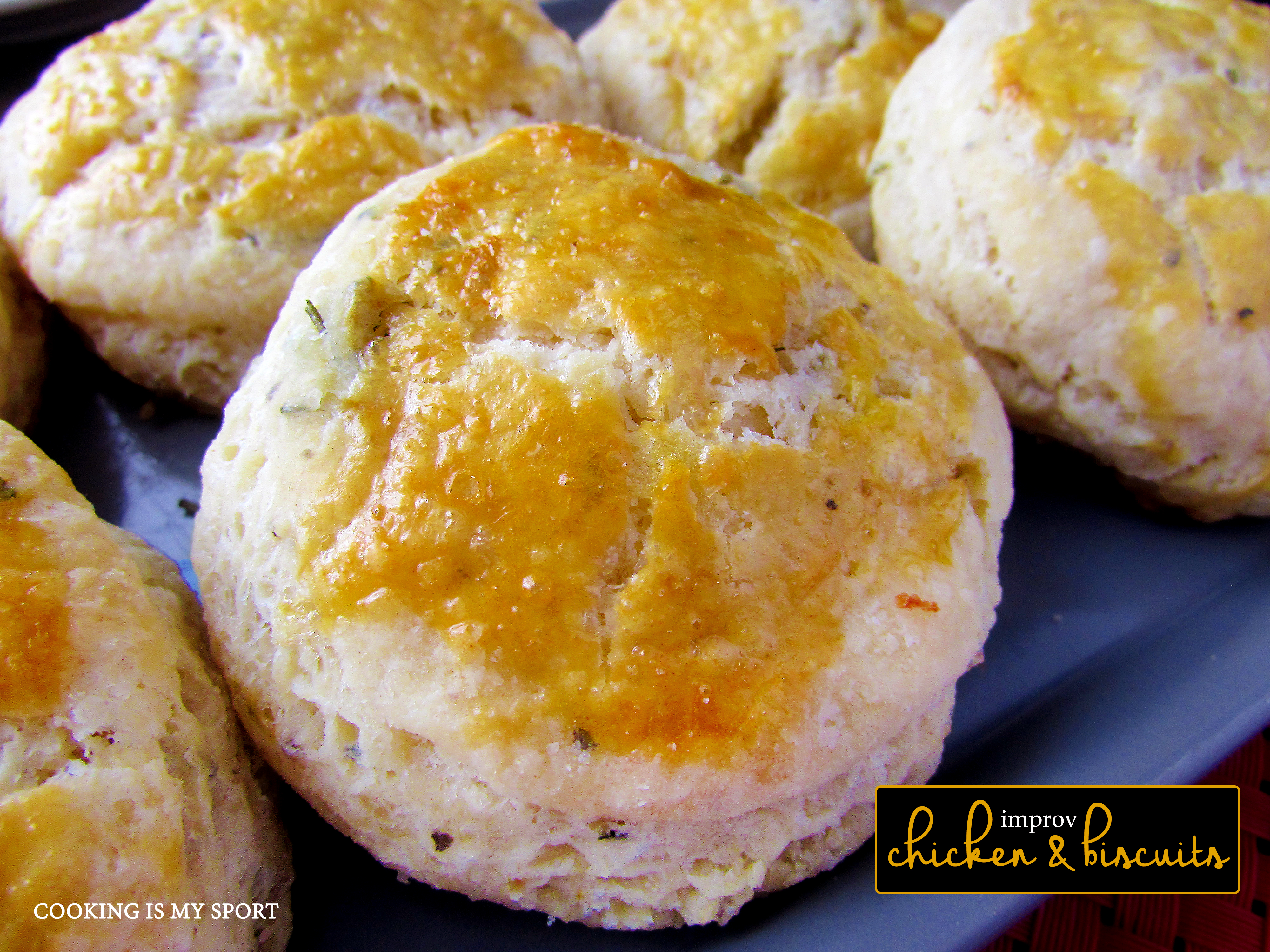 I originally set out to use my new springform pan to bake a deep dish chicken pot pie that I’ve had my cooking eye on for a while. I had a spare pie crust in my freezer that’s been there since I made my Deep Dish Apple pie a few months back. I thought that since it’d been in the freezer all this time, and since I could still see the chunks of butter in the dough that it would be okay to just thaw in the fridge and use, thus sparing me the necessity of making another pie crust from scratch. 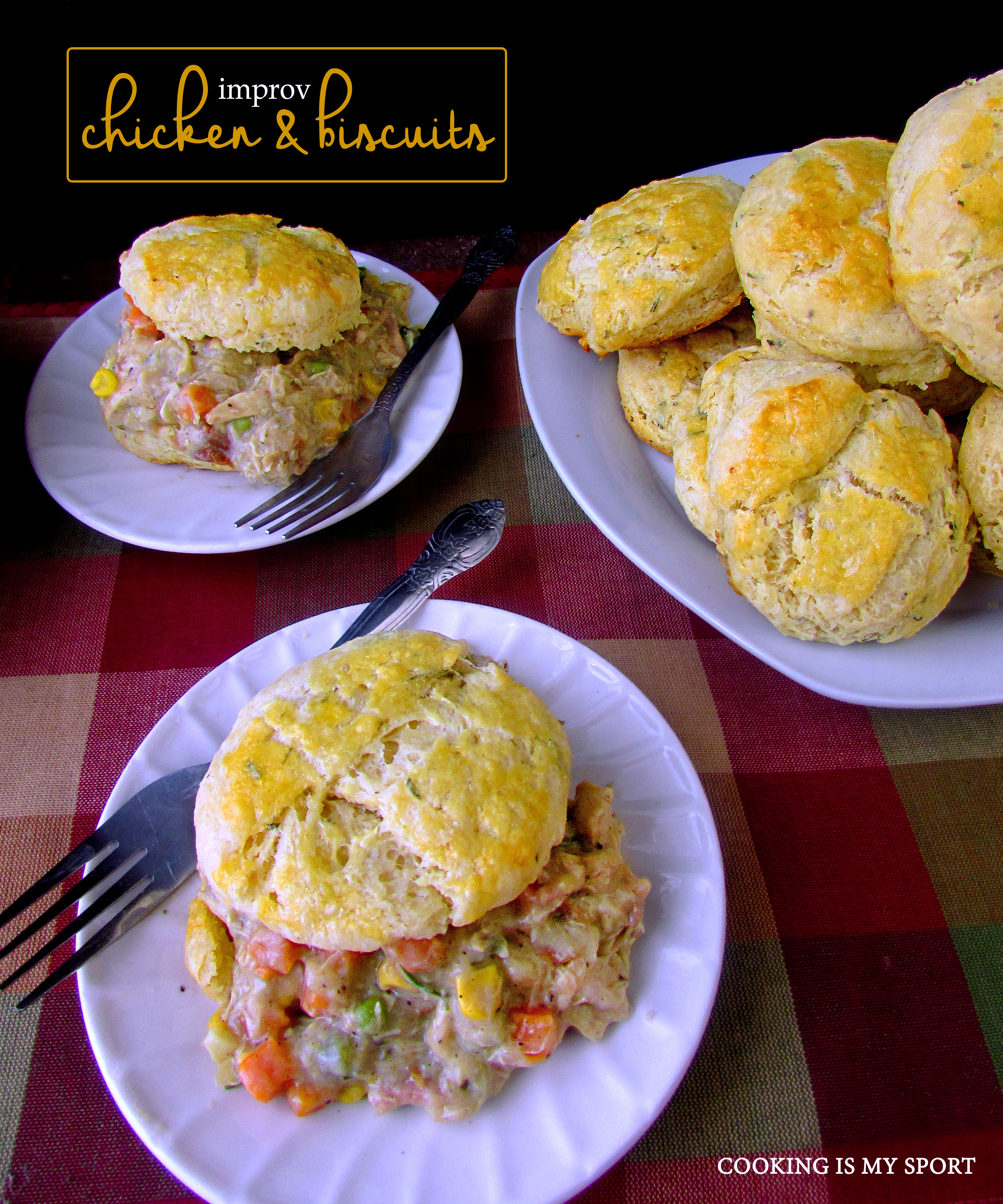 So what had happened was, I rolled out the thawed pie crust and lined it in my springform pan. I thought it felt and looked fine. There waaaaaas a tiny little problem though: I didn’t have parchment paper and/or pie weights or beans to place on top of the crust while it pre-baked in the oven. All I had was aluminum foil.

So I knocked on wood,placed a layer of foil on top of crust and put it in the oven and waited for something to happen.

And turns out, something DID happen…it just wasn’t a very good something. 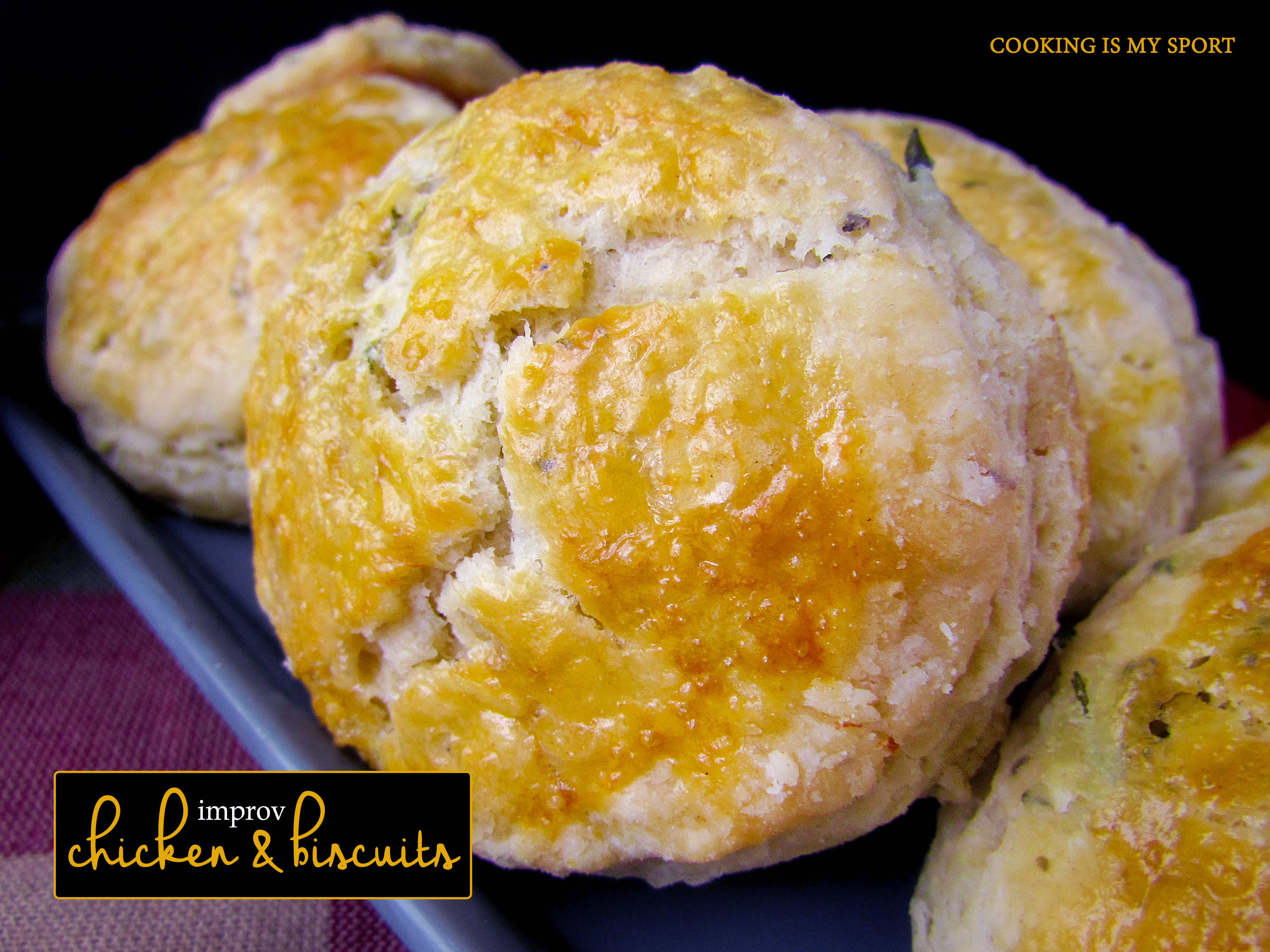 About ten minutes into the bake, (just to be on the safe side) I looked in the oven and lifted the foil.

Yeah so….the crust was collapsing in the pan in a gelatinous, greasy pile. It was a hot mess.

No WAY was this gonna work.

To be perfectly honest, I have NO idea what I did wrong, guys.

Maybe I really did need the parchment paper and pie weights. Like, maybe they were the “heart and soul” of the recipe. (Doubt it, but hey, could be.) 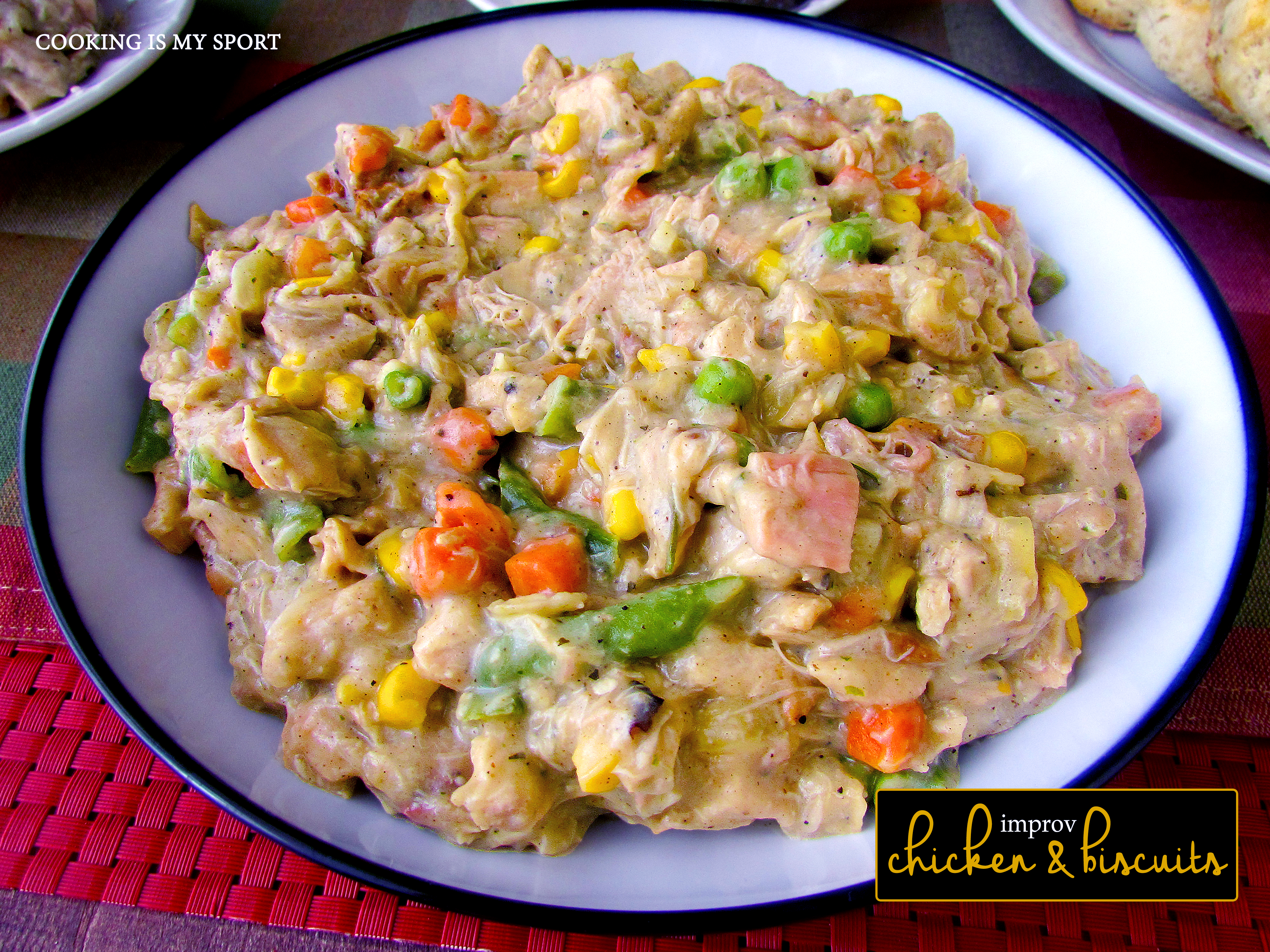 It’s very possible and likely that the fats in the butter of the frozen pie crust over the long period of time had in the freezer, I don’t know….evaporated? Maybe there’s an expiration date on frozen pie crust. I didn’t think so, but maybe there is. If one of you out there happens to be a food scientist, maybe you can explain it to me.

But then, I’m also half convinced that the oven in our new apartment hasn’t been properly calibrated. Despite being an electric range like our last one was,  it takes longer to bake things in this oven than the allotted time for recipes–sometimes much longer. I’m planning on going out and buying an oven thermometer this weekend and testing the temps to confirm my suspicions. I’m hoping I’m wrong about that though.

Regardless, my plans for a deep dish chicken pot pie were screwed. 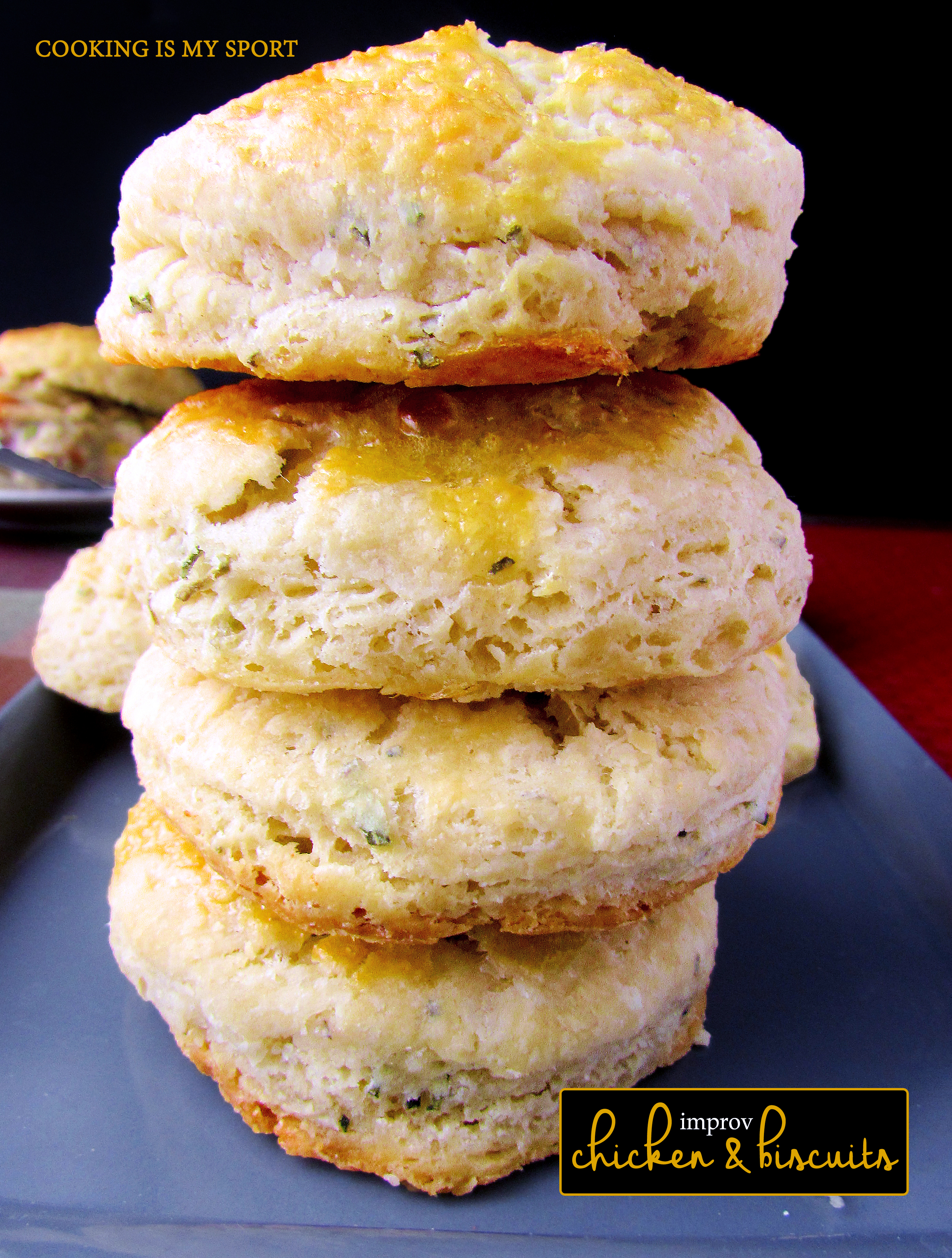 The problem was, I couldn’t just walk away. I’d already started making the filling. I’d involved myself. I was committed to this now.

After promptly shoving the misshapen blob of deceased, failed pie crust into the trash can, I took a step back and thought: How was I going to salvage this dish to my satisfaction? Technically, I could’ve just made the filling and served it all on its own. I just didn’t want to do that.

I had started cooking with the expectation that we were going to have chicken pot pie for dinner, not just chicken pot pie filling. I wanted the carbohydrate-stick to your-ribs-chicken pot pie-experience. You can’t get that with filling all on its own: that’s just called a chicken stew. 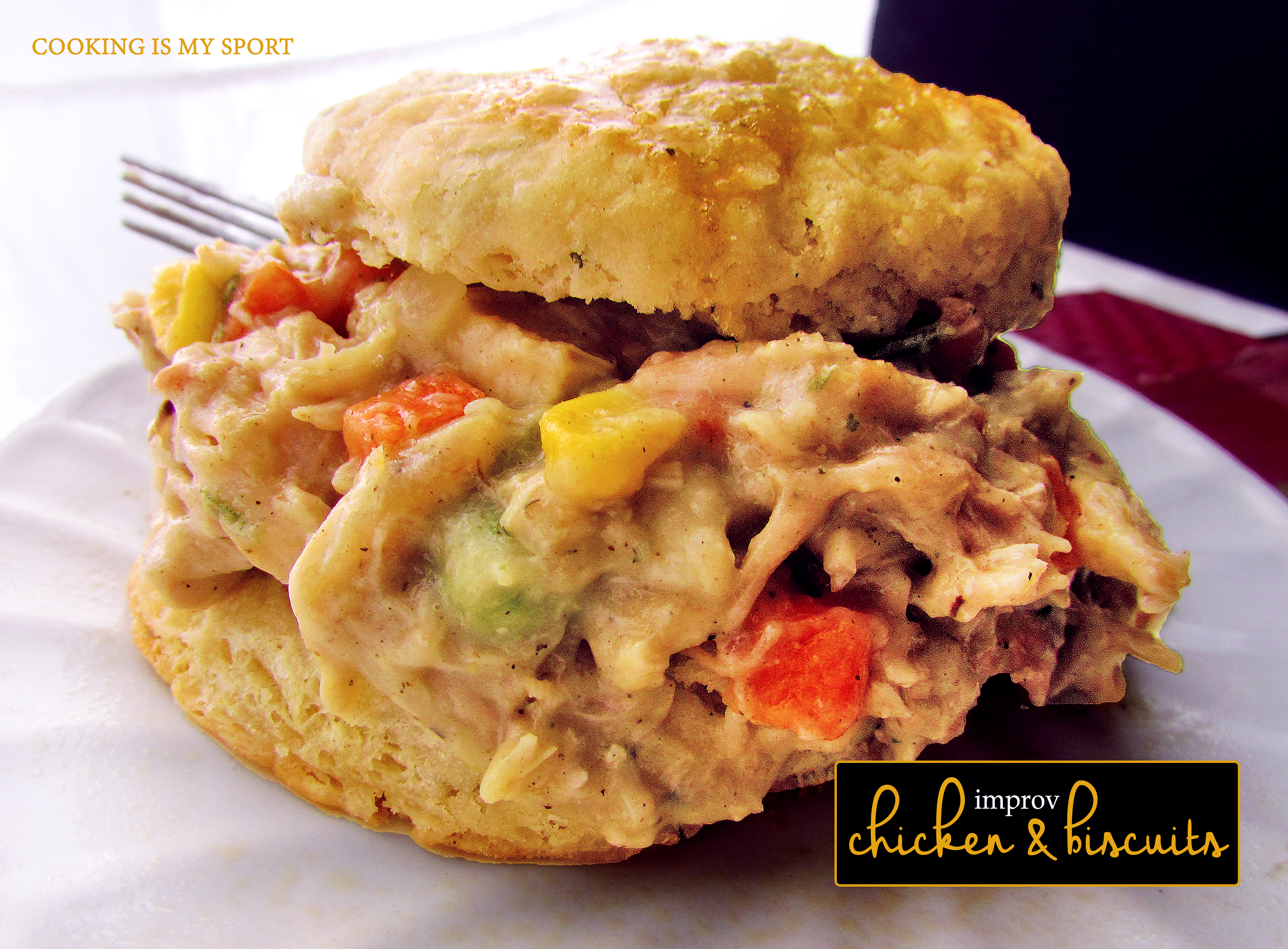 As a general habit, I try to always have a box or two of frozen butter in my freezer at all times. That way, I always have butter that’s cold enough to make two things whenever I want: pie crust, and biscuits. After the embarrassing defeat of my other failed pie crust, I wasn’t up for making another one of those just then. Biscuits were an easier and quicker alternative (especially considering I only had a few more hours left until it would too dark outside for me to take pictures.)

I still had quite a bit of fresh rosemary left from making the filling that was meant to go in my pie. So I  called an audible and decided that I was going to make rosemary scented buttermilk biscuits to serve with the chicken filling.

Fortunately, the biscuits came together VERY quickly and easily. I was in a frustrated, frenzied hurry so I actually handled and kneaded at the dough much more than I’m usually comfortable with when I make biscuits, and they STILL came out flaky and tender on the inside. With some chicken filling spooned on top of these babies, you really are in for what I like to think of as the quintessential winter comfort food that makes you want to take a nap as soon as it’s gone. So despite my snafu with the failed pie crust, I still feel pretty good about how I rocked this out. It turned out well.

Y’know, thanks to improvisation and stuff. Thus the name of the recipe.

(I’ll be taking this dish to Fiesta Friday #104, co-hosted this week by Mila @ milkandbun and Hilda @ Along The Grapevine.)

Heat the remaining 4 tablespoons butter over medium heat. Once melted, whisk in the flour. Cook until the mixture is just starting to turn golden brown, 2 to 3 minutes. Gradually whisk in the chicken broth. Bring the mixture to a simmer. Add the vegetables back to the pot, along with the bay leaf, rosemary, and thyme. Season with salt, black pepper, onion powder and the honey mustard. Simmer for 15 minutes.

Stir in the cream, and chicken and return to a simmer. Simmer for 4 to 5 minutes more. Remove the mixture from the heat.

In a small bowl, whisk together buttermilk, cream, and whole egg.

In a large bowl, whisk together flour, baking powder, salt and chopped rosemary. Using the large grates on a box grater, grate the butter directly into the flour mixture and toss gently with a spatula until fully coated. Working quickly and using your fingers, rub butter into flour until butter forms marble-sized pieces. Alternatively, add flour mixture and butter to food processor and pulse 2 to 3 times to form marble-sized pieces; transfer to a large bowl.

Add buttermilk mixture and gently mix with a fork until just combined; the dough should look somewhat dry and shaggy. Cover and let rest in the refrigerator for 30 minutes.

Turn out the dough onto a lightly floured work surface. Form dough into a rectangle, lightly pressing and folding to bring it together; avoid squeezing or kneading the dough.

Fold dough into thirds like a letter. Using rolling pin, roll out dough and repeat folding once more. Roll out dough to about 1/2-inch thickness. Wrap in plastic and transfer to refrigerator for 10 minutes.

Return dough to work surface, and, using a 3-inch round cookie-cutter and pressing down without a twisting motion, cut out biscuits as closely together as possible. Gather together scraps, pat down, and cut out more biscuits; discard any remaining scraps. Brush the top of each biscuit with egg-wash.

Bake the biscuits in a 400°F oven until risen and golden, about 15 minutes. Let cool slightly, then transfer to wire rack. Serve warm or at room temperature with the smothered chicken.

29 thoughts on “Improv Chicken and Biscuits”