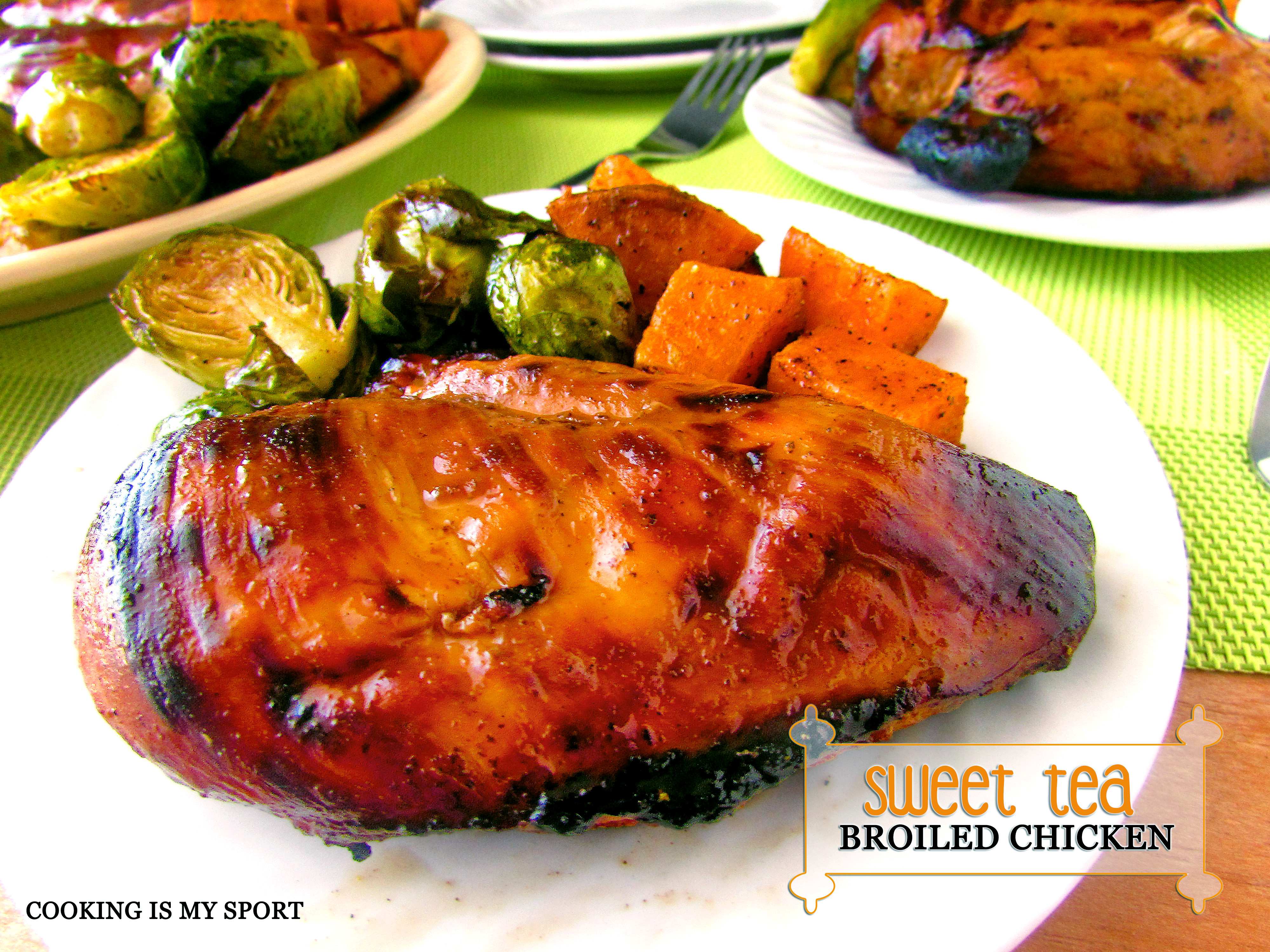 You guys wanna know one of my favorite things about visiting the South? They have an immense appreciation and respect for sweet tea there.

You can get it in gas stations. You can order it in restaurants. They don’t look at you like you’re cray-cray when you ask for it with no ice.

It’s not like that up here in the North. 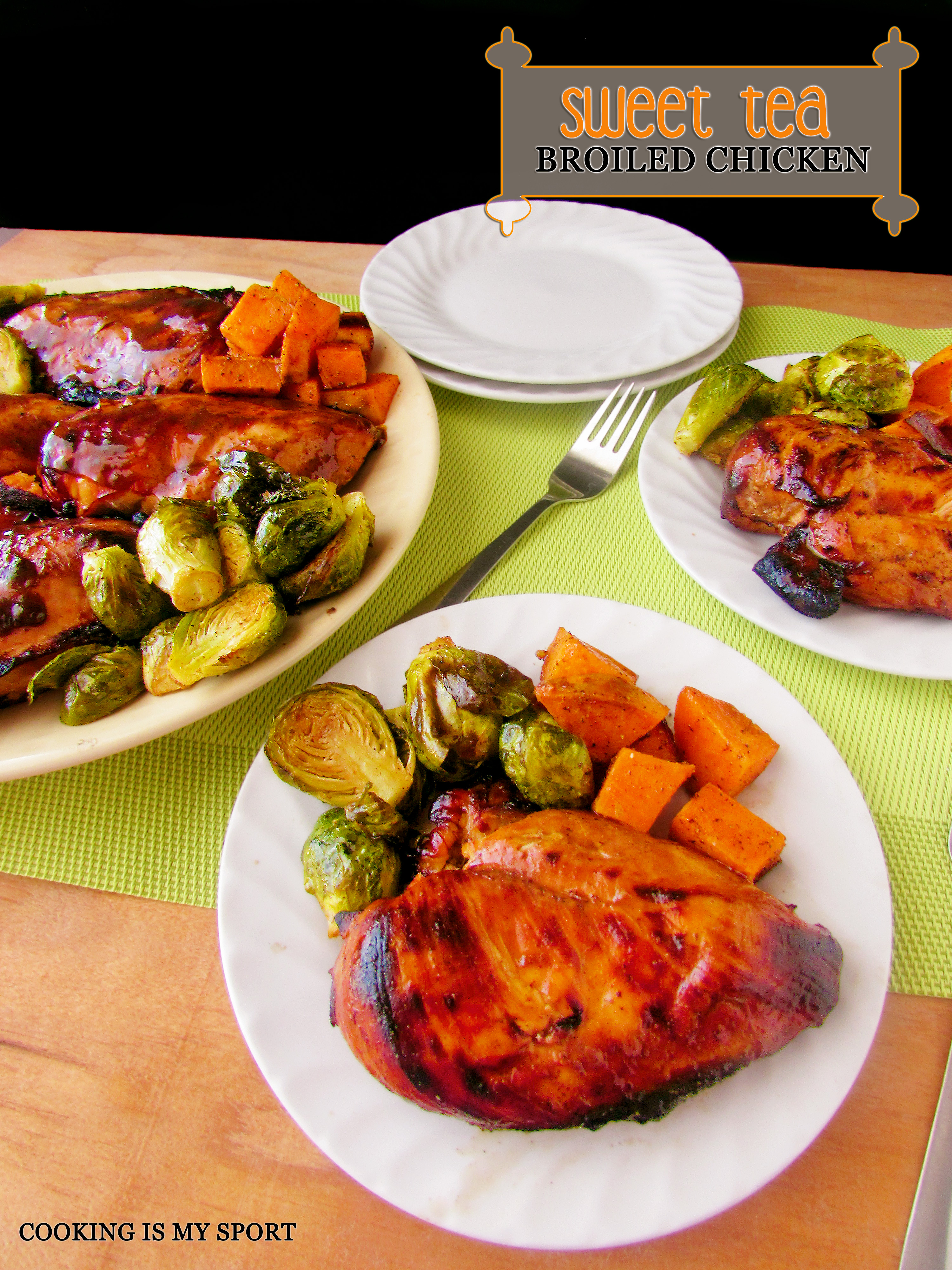 The ‘sweet tea’ they sell in gas stations and grocery stores here isn’t real sweet tea. It’s not. I’ve been to the South. I know the difference.

Here, when I ask the waitress in a restaurant if they serve sweet tea, she gives me this blank stare and says something along the lines of, “Oh,um…we’ve have Lipton’s Lemon Iced Tea, but it’s not really sweetened.”

And then I just order water. 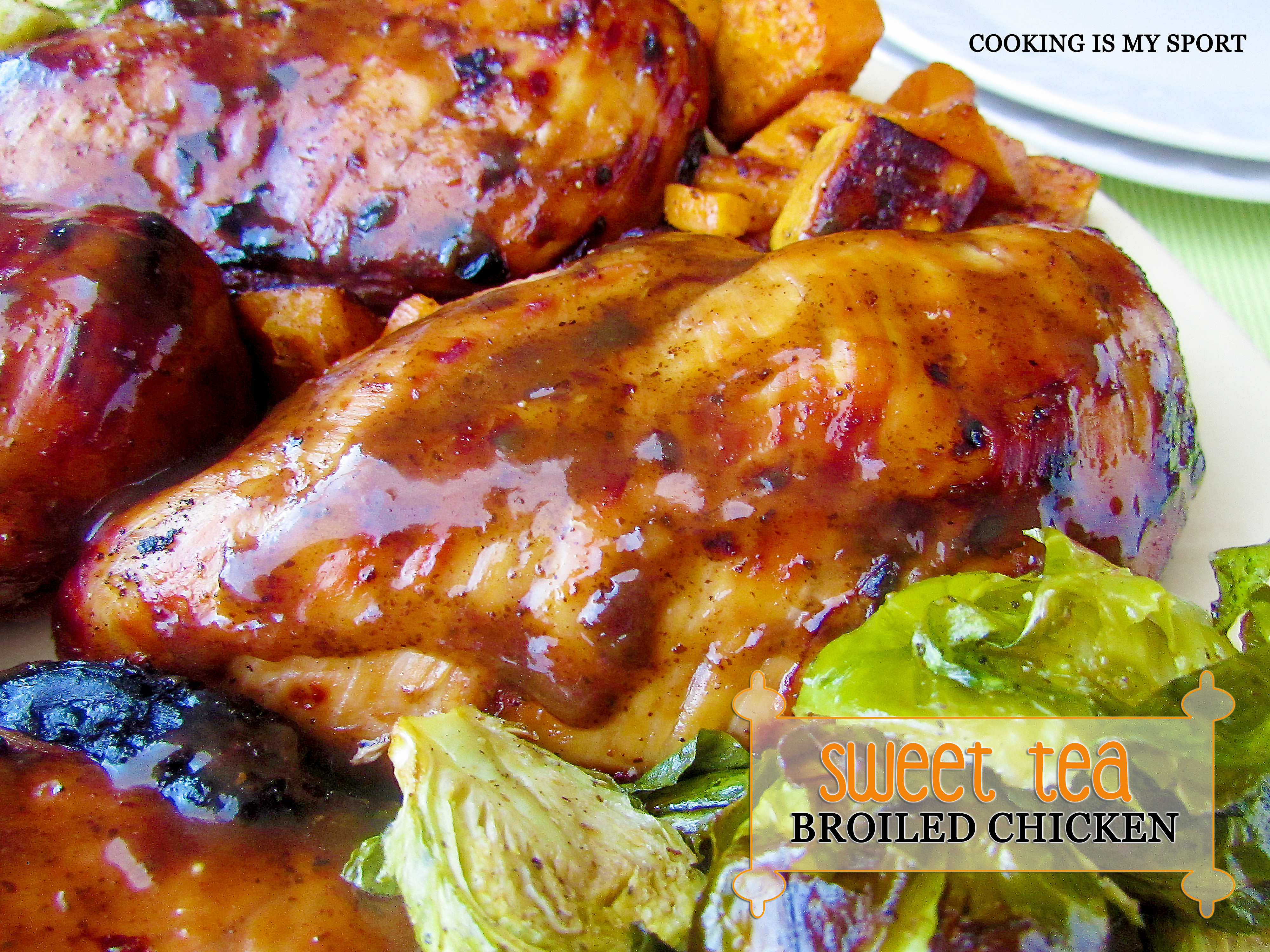 Don’t judge me, but the closest thing I can get to Southern sweet tea here is the stuff that they sell at McDonalds. It sure isn’t the real thing, but it’s better than the lemon Lipton tea most other joints serve. They do throw me major shade when I ask for no ice, though.

It’s as if they have a problem with someone who’s caught onto their little trick of filling the cup to the brim with ice so that they can skimp on the amount of tea they actually TRY to give. 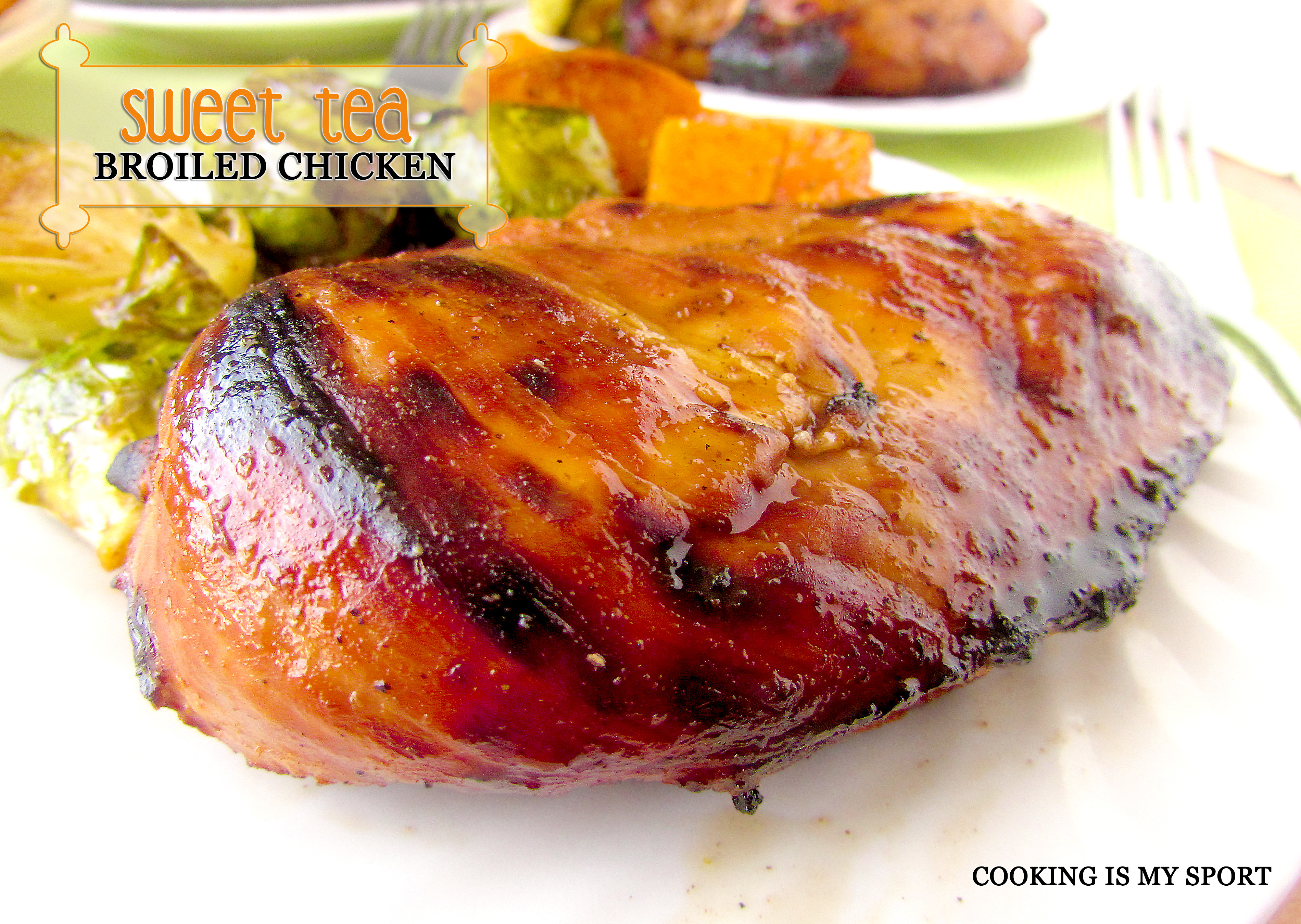 I was sitting at home one day really missing Southern sweet tea when I suddenly thought of how interesting it would be to try and cook with it. The way I saw it, a savory dish could really provide a wonderful counter to the sweetness of the tea with the right blend of spices- and the right protein, of course.

Since we are talking about a Southern drink, I thought I’d go with one of the main proteins that’s used in Southern cooking (also my go-to for affordability and ease): the chicken breast. 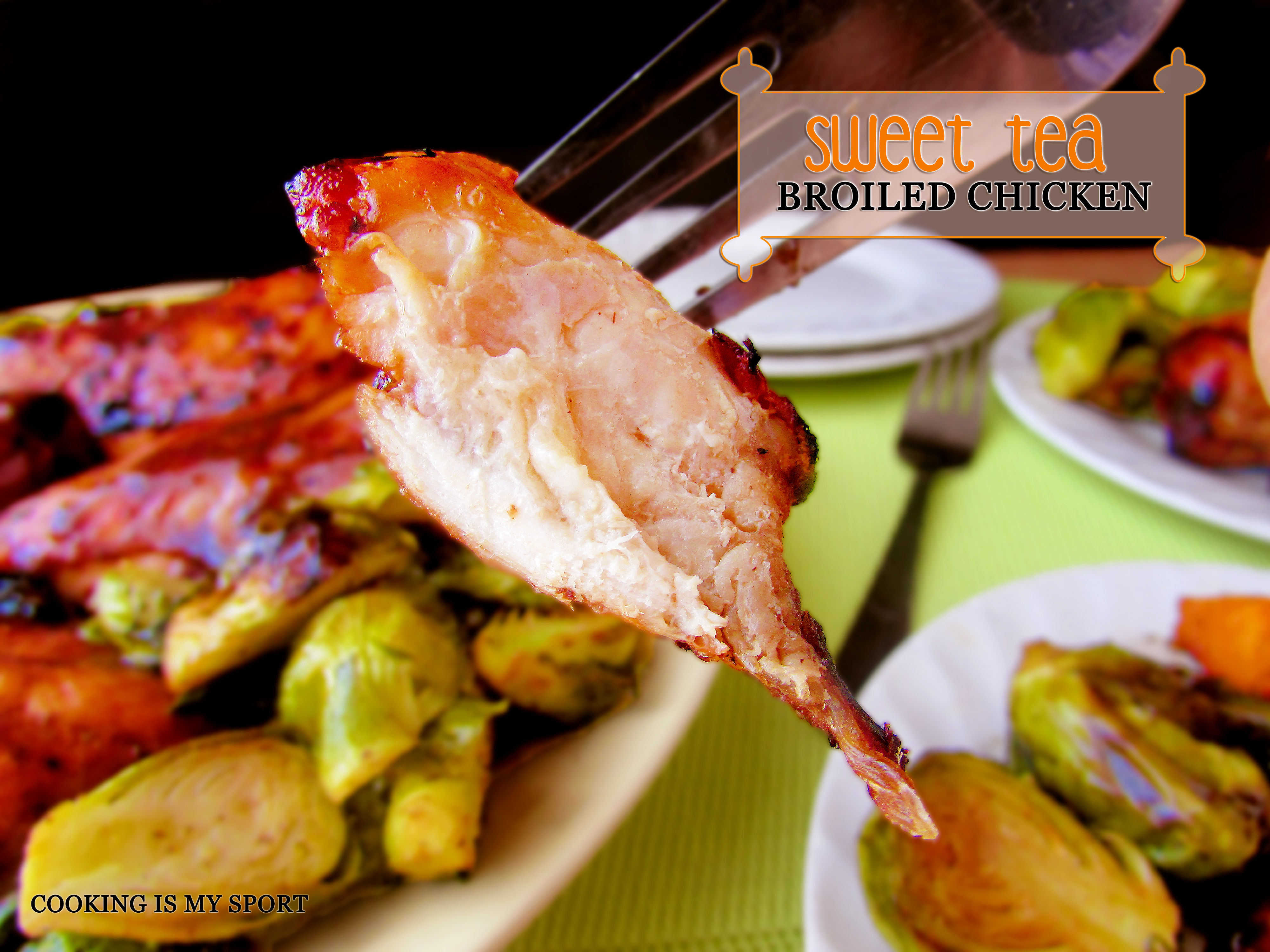 I’ve heard of sweet tea brined chicken that’s then deep fried, but for my rendition I thought that I would keep things here healthier and put my broiler to use instead. Plus, I think that this here marinade I’ve put together is pretty tasty all on it’s own without needing the addition of a greasy, crunchy skin coating.

Not to knock fried chicken, though. Fried chicken is always a winner. But this is too. Trust me.

I love when one of my harebrained ideas for the blog actually  pays off, and this is really one of them. Broiling the meat here was just such a good move; soaking it in the tea then placing it underneath the heat of the broiler creates a thin, but slightly crisp, golden sweetened crust on the outside that opens to tender and moist white meat on the inside. Then of course, there’s the charred edges that have that perfect contrast of flavor that ‘almost’ fools you into thinking the meat was grilled. 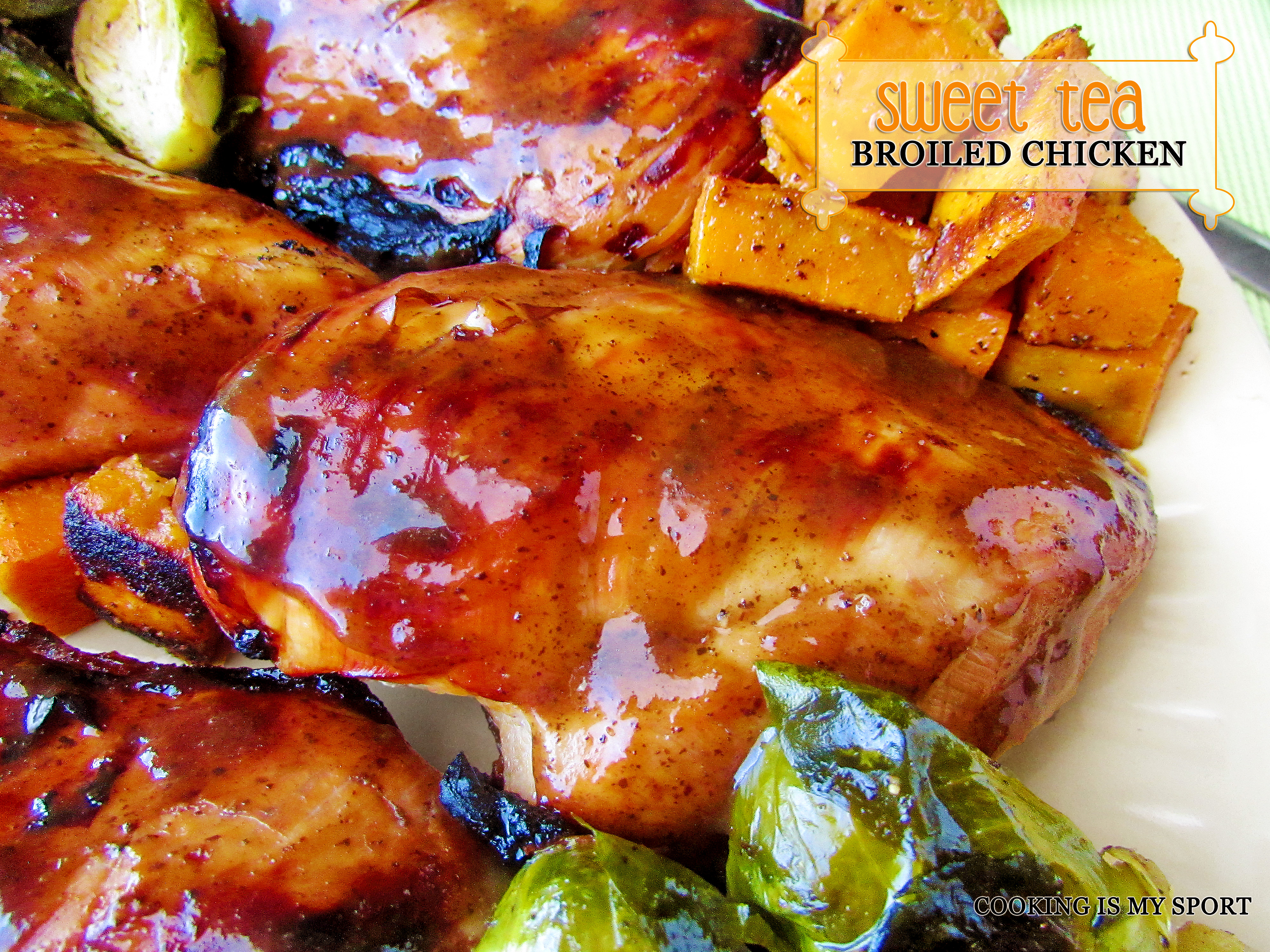 If you do decide to make this dish (and c’mon, why wouldn’t you?) then don’t skip the step of step of setting aside the extra cup or so of marinade to make the sauce later on. Because the sweet tea sauce really is the star here. When I ate this dish for dinner, I drizzled some over my vegetables and was a VERY happy camper that night.

Maybe I should start bottling and selling it.

I didn’t make it to last week’s Fiesta Friday and even though I’m late this time around, I’ll still be there for Fiesta Friday #64 this week. Thanks to Angie for hosting, and Ginger@Ginger & Bread and Loretta@Safari Of The Mind.

1. Place water in heavy pot and bring to a boil.

2. Remove from heat, then place tea bags in pot and allow to steep for about 20 minutes.

3. Add next 9 ingredients and place back over medium heat, allowing to come to a simmer for about 10-15 minutes to allow sugars to dissolve and flavors to combine. Remove from heat and completely cool. Set aside about 1 cup of the marinade to use for later.

4. Divide the chicken breasts between two gallon size plastic bags. Pour even amounts of the remaining marinade over chicken, seal bags and refrigerate overnight or at least one hour.

6. While chicken is cooking, pour the reserved unused marinade into a small saucepan and place over the stove over medium-high heat. Allow to reduce and thicken until it makes a sauce to desired consistency. Serve over chicken.