Up until now, there are only two cornbread recipes that I’ve ever used. Just two.

The first default choice is my grandmother’s recipe, which is one I’ve shared on the blog before. We use it for the ‘bread’ part of every family dinner that we have, and also use it for the base of our special family dressing that we make every year for Thanksgiving and Christmas. Keeping it true to our Southern roots, it’s non-sweet, mainly cornmeal based and rather crumbly in texture. There is a very simple explanation for this: it’s friggin marvelous.

The second recipe that I’ve used and actually been pretty satisfied with, is one I found on Allrecipes.com. It’s a ‘Northerner’ recipe that’s rather sweet with a more even ratio of flour to cornmeal. As a result, the crumb is more finer than my grandma’s. It’s pretty tasty I’ll admit, and when I’m trying to aim for a cornbread that caters to my more “Northern” tastebuds, I’ll throw it together on the quick.

And just in case you were wondering…no. I don’t do Jiffy Mix. It’s nothing personal, I don’t even think Jiffy Mix tastes that bad. But…no.

I’m stuck up when it comes to my cornbread guys. The truth is, most of the time it’s a hit-or-miss game. And I can think of very few other things that are  more depressing to me than cornbread that is a big fat ‘miss’.

I really didn’t think I’d ever be saying this, but with my recent Christmas gift of Chef Marcus Samuelsson’s newest cookbook “Marcus Off Duty,” I think I’ve found a third cornbread recipe that I’m actually going to be willing to keep on my super exclusive roster. The almost immediate appeal to me was finding out that this is the recipe for the cornbread that is served at Marcus’ Harlem restaurant Red Rooster- a place that is on my Food Bucket List to attend before I buy the farm.

Word of warning for my Southern friends: this is not exactly what we think of when it comes to ‘cornbread’. In the first place, it’s extremely moist, almost to the point where it melts in your mouth. Secondly, us folks used to Dixie cornbread- and likely some Yankees too- will at best give a double take at the inclusion of ginger, cardamom, chile powder and paprika in a cornbread recipe. At worst, we’ll start a riot.  But just hear me out- I was skeptical too. But it works. It really does. The spices aren’t overpowering at all, and they somehow work REALLY well with the inclusion of the sharp cheddar cheese. 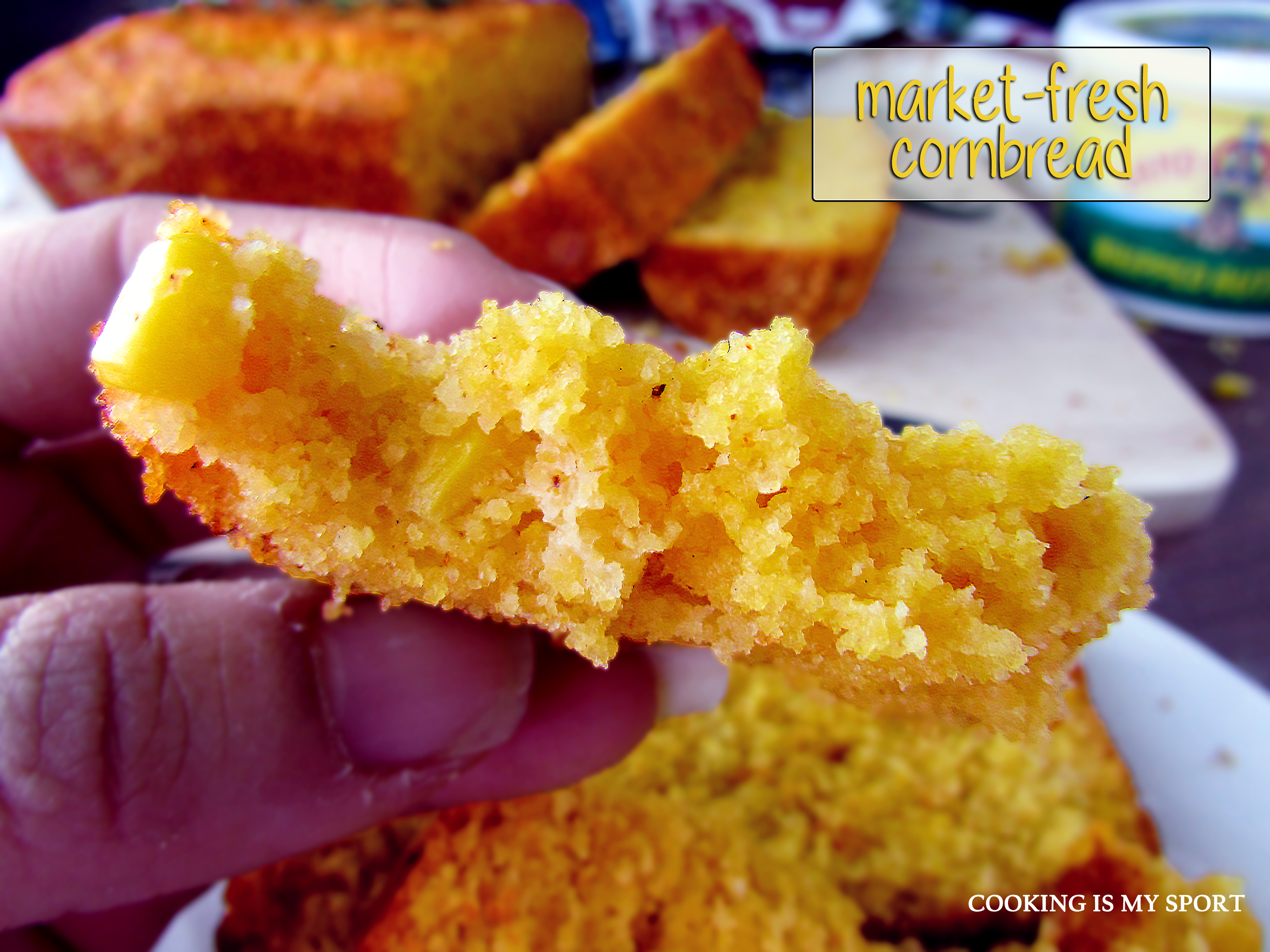 Oh yeah- and did I mention there’s fresh corn baked into the batter? Cause there is. And it was a really good idea. It gives a special ‘chew’ to the bread that is absent in most other recipes that can result in a bland one-note texture. None of that here, I can assure you.

I think my favorite part of cornbread is the crust that forms on the top and sides while baking. If you don’t know what I’m talking about, then you’re doing the ‘cornbread’ thing wrong and you should rethink your entire life. This loaf’s crust baked up perfectly.

All of that being said, I do intend to stick with just these three cornbread recipes for both the near and distant future. Life shouldn’t be TOO complicated. Some things need to be kept simple and stream-lined.  Am I right or am I right?

2. Put the butter, ginger, cardamom, chile powder, paprika, and sugar into a small pot over medium heat and cook until the butter is melted and the spices are fragrant, 3 to 4 minutes.

3. Whisk the cornmeal, flour, baking powder, baking soda, and salt together in a large bowl. In a separate bowl, whisk the eggs, buttermilk and spicy butter together. Pour the wet ingredients into the dry and stir until all the dry ingredients are moistened. Stir in the cheddar and corn, then fold in the scallions if using.

4. Scrap the batter into the loaf pan. Set the pan on a baking sheet, slide it into the oven and bake until a skewer stuck in the center comes out clean, 50 to 60 minutes. Turn the loaf upside down onto a rack and let cool for 20 minutes. Then lift off the pan.