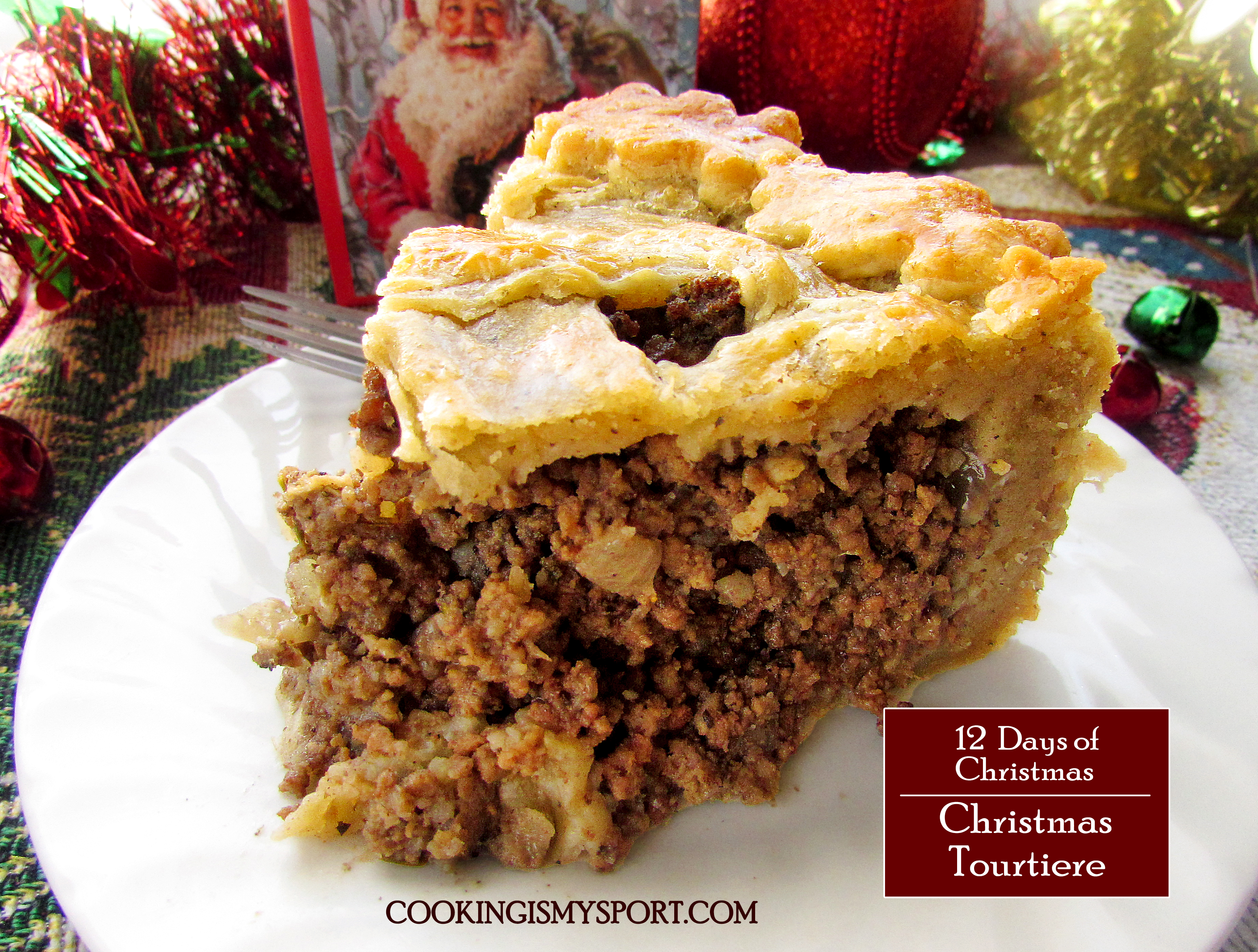 Hey y’all. How’s the weather in your neck of the woods?

It was sunny and a high of 66° in mine. I can and have definitely gotten used to this. I’ve spent most of my life in the Mitten, but one thing that I can tell you for sure I don’t miss about it is snow and all the extra crap that comes with it. In most other parts of the country, winter has definitely settled in and made herself comfortable. (Snow storms in Georgia, yikes.)

Even if snow and all of its inconveniences aren’t apart of my life anymore, this is still the time of year where I want to eat warm, comforting, stick to your ribs, make-you-want-to-take-a-nap food. My body craves that whether I’m in the midwest or on the west coast. 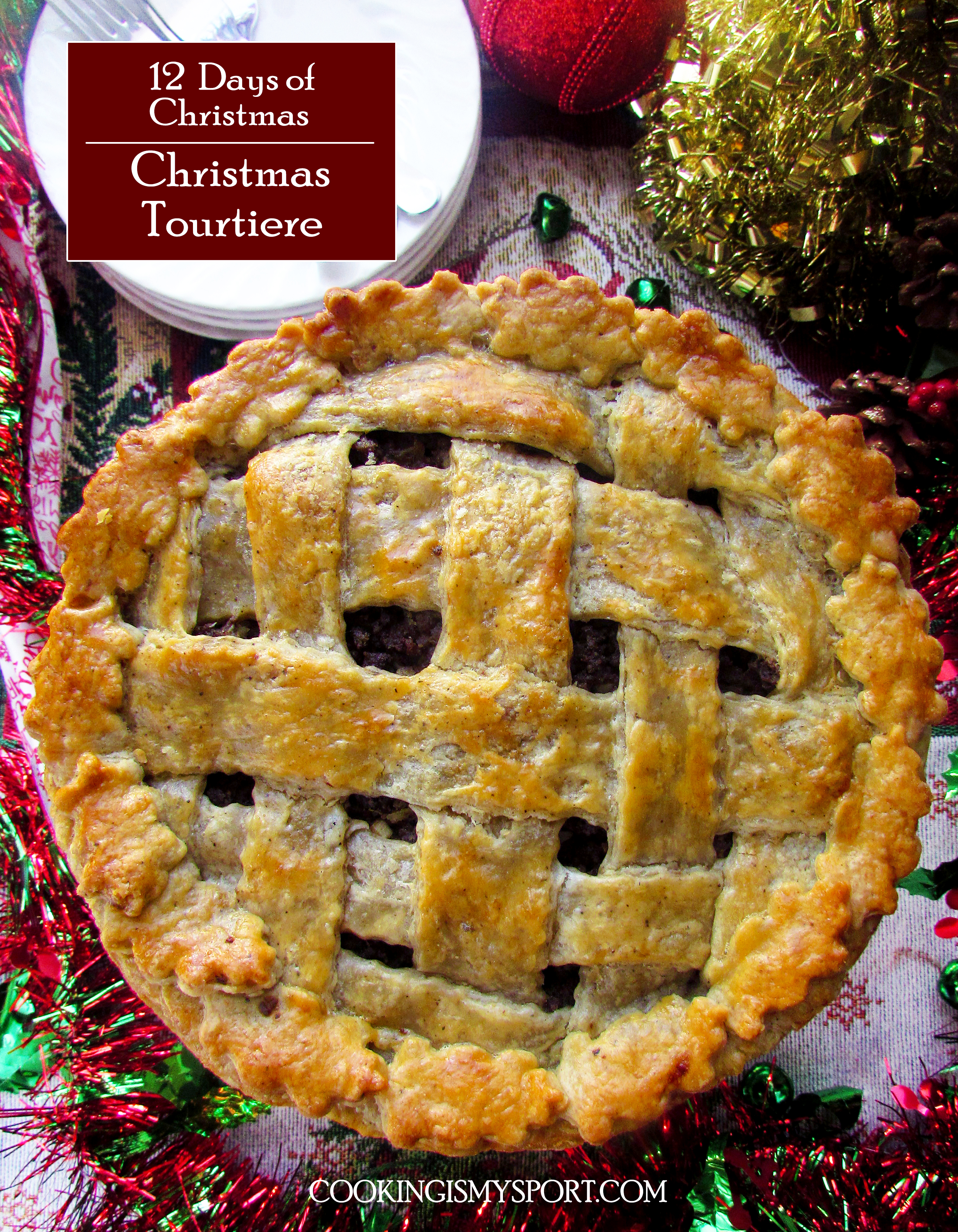 The bulk of this Christmas series is sweets and desserts (as is expected), but I did want to try and mix things up this year with the inclusion of some savory options. The first were the savory chili crackers on Day 2. Today for Day 8, I’m super excited to share this second savory recipe that’s actually been a long time coming.

I’ve mentioned before that I really love meat pies. You can find the proof of this through several posts that are already on the blog. There’s a meat pie for just about every culture, region and taste. This one is a French Canadian one called a Tourtiere. 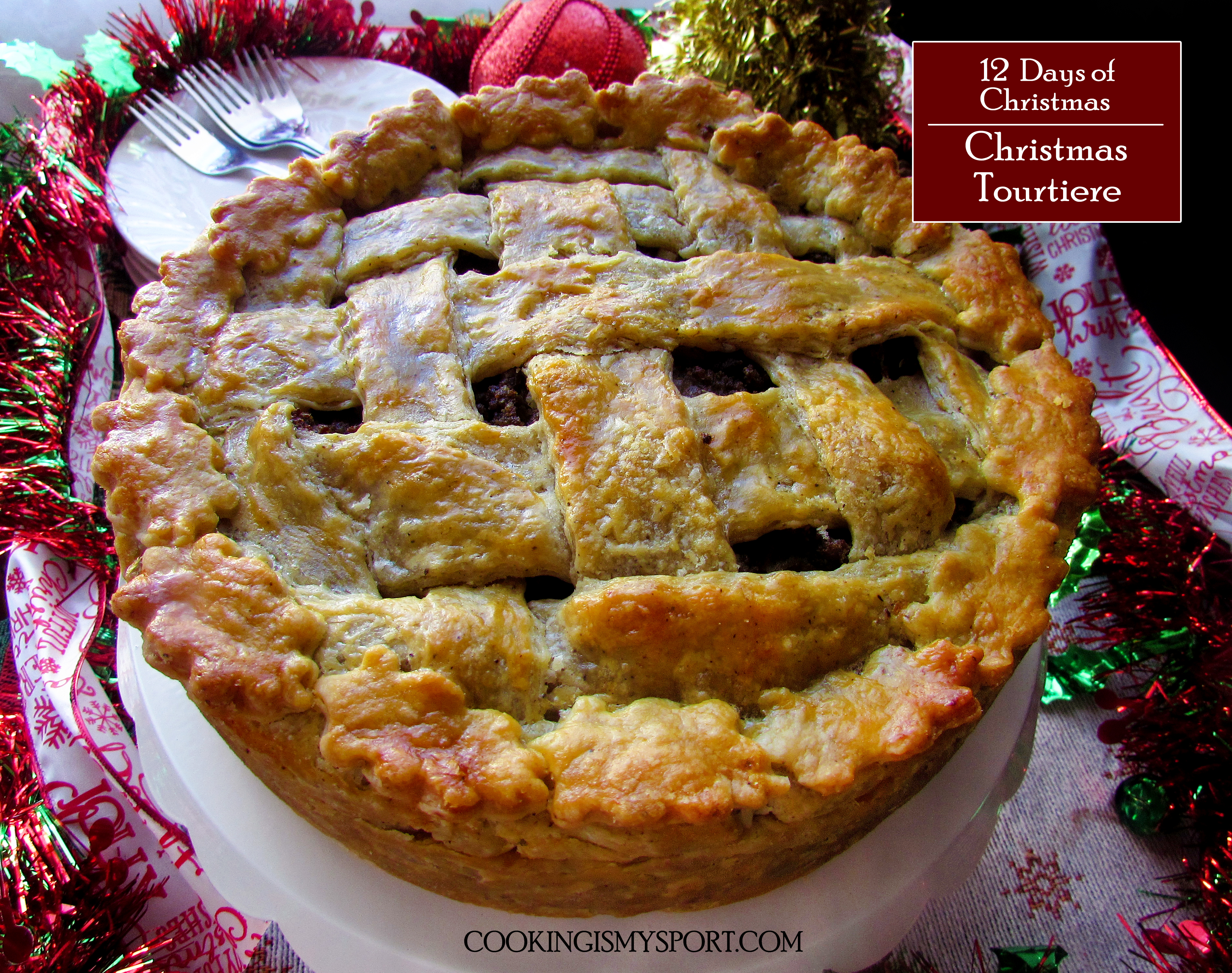 Tourtiere is a meat pie typically made with ground beef, pork, veal or a mixture of all three. What I think makes it most distinctive from other meat pies is the spices that are used inside to flavor the filling. They’re the warm, sugar and spice flavors that hit those same winter notes that I’ve put in other recipes in the series. Tourtiere was something that I’ve known about for a few years. Because it’s a pie that is traditionally baked at Christmas time I thought it would be a good addition to the 12 Days of Christmas, done my way. 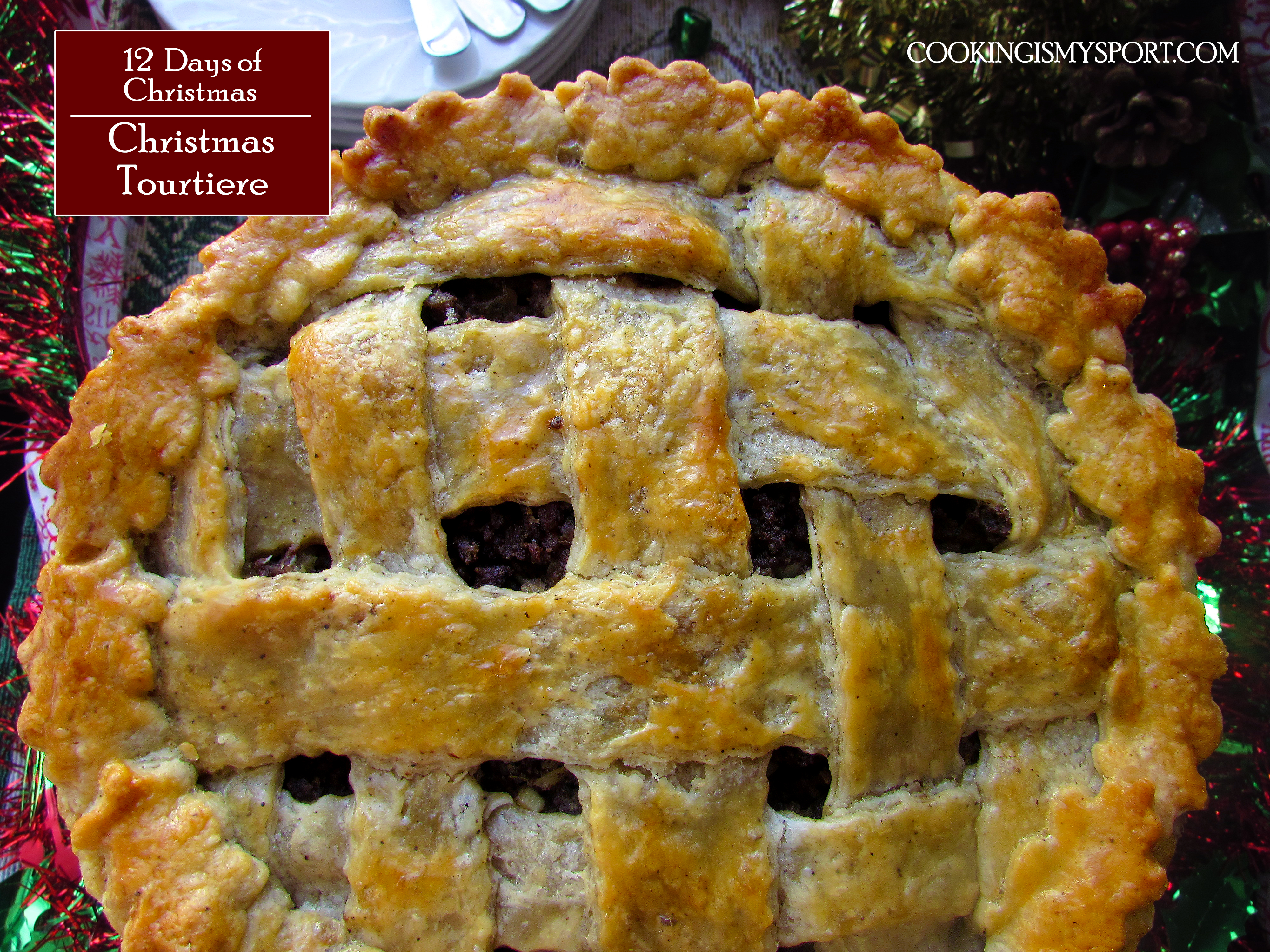 I’ll be honest. I love meat pies, but in making them I have found through trial and error that there are two things that can easily go wrong. First, your pie crust can either turn out too tough, too thin or underbaked with a soggy bottom. Second, the filling can turn out too dry and bland–this is ESPECIALLY true with ground meat fillings. *Shudder*

I’ve tried to eliminate those problems for you guys here so that we all can have delicious winter meat pie to eat with no disappointments along the way. Y’all ready? 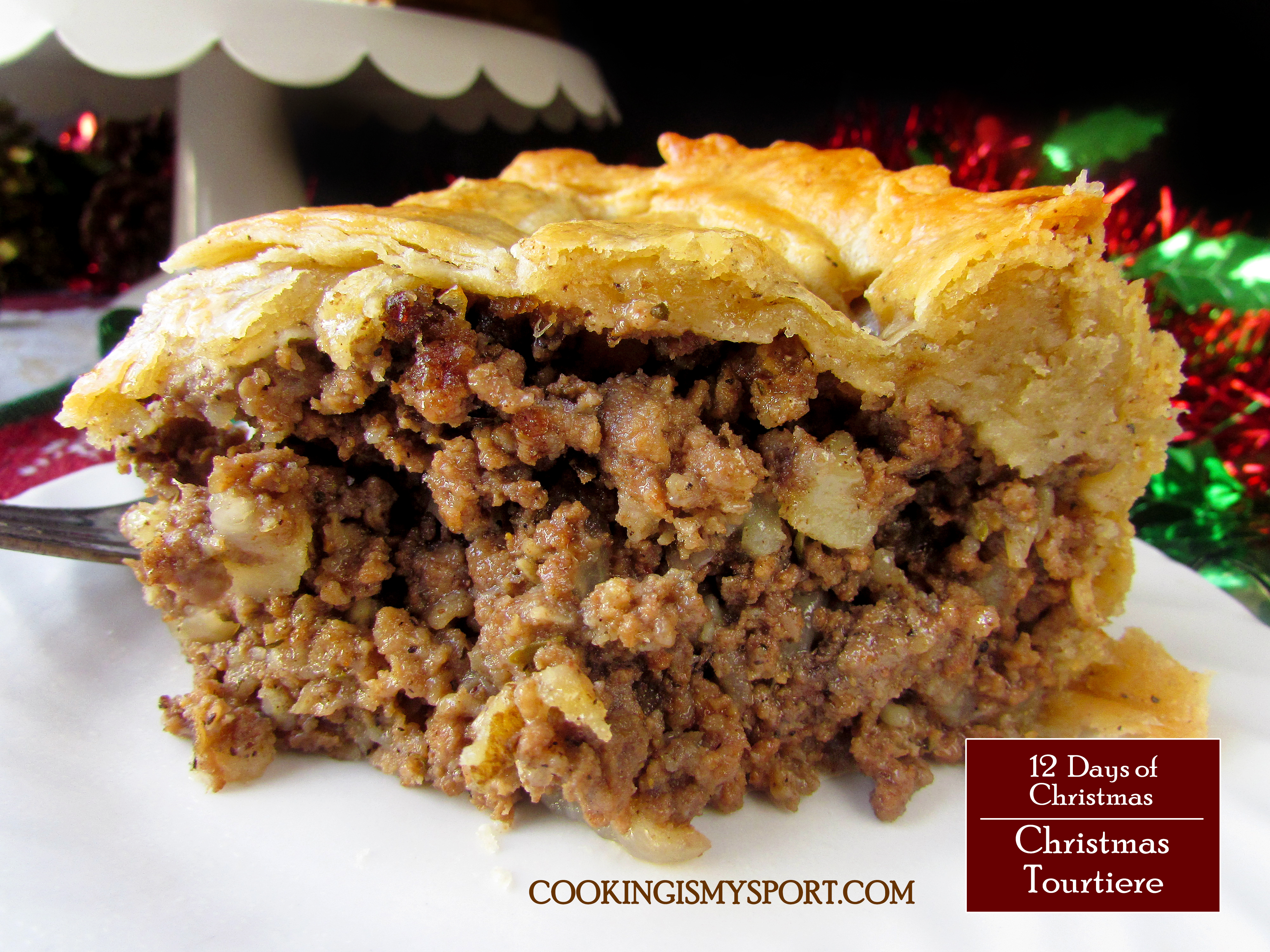 I wanted to make sure that the pie crust I used was sturdy enough to stand up in the pan and also durable enough to support the bulk of the filling with minimal to no leaks. At the same time, I wanted it to be buttery, tender and flaky as well. This one pulls both off. I used the same method in putting together the dough as I do with making biscuits and scones: frozen butter grated directly into the dry ingredients with minimal hand touching. I also added seasoned salt and black pepper to give it a boost of flavor. All in all, it’s a cinch to put together.

The filling is also easy to make, it just requires more attention. The ground beef is mixed with sauteed onion and white roasted potato. Half of that roasted potato is going to be cubed and mixed with the ground beef and onion. The other half is going to be mashed and used as a kind of ‘glue’ that helps the beef and onion stick together while also retaining their moisture. 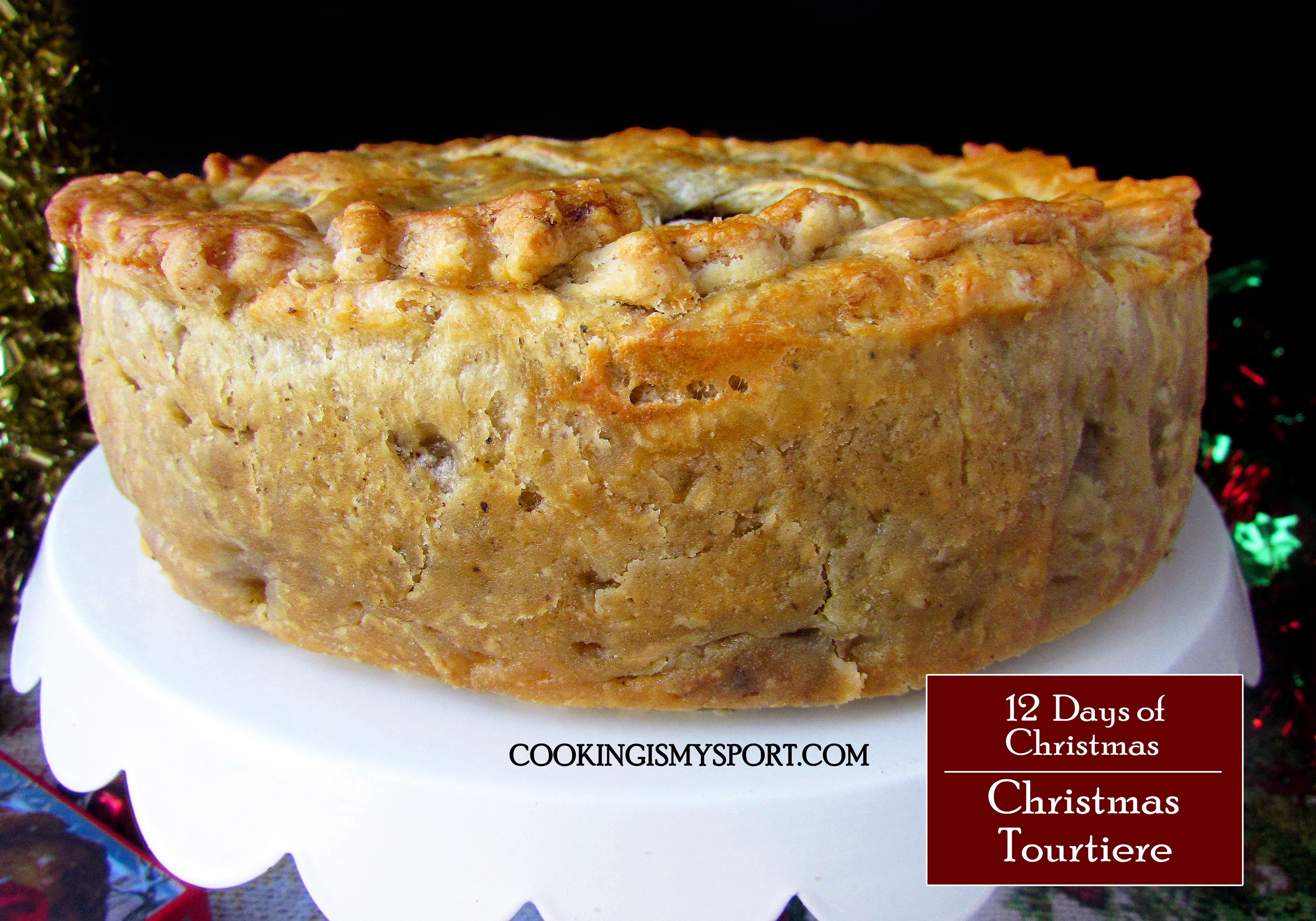 Seasoning in a meat pie is everything. You have to make sure it’s seasoned, and seasoned well. I simmered this filling in beef broth and was VERY generous with the spices. Keep tasting it along the way to adjust. Also, I highly recommend letting both the pie crust and the filling sit in the refrigerator overnight, for two reasons. One, pie crust needs time to rest so that the butter will stay cold enough to make flakes as it bakes. It will also be easier to roll out and press into the pan. Second, the filling will develop deeper flavor the longer you let it sit. You also don’t want to put hot (or even warm) filling inside a semi-warm pie crust. I don’t foresee that turning out well.

One thing I do want to advise is to bake the pie on a lower row of the oven. Why? Well, the lower it bakes, the more the bottom crust will cook and avoid the dreaded soggy bottom. If you have to cover the top crust with foil to keep it from browning too quickly so be it, but don’t neglect the bottom one.

Doesn’t this look good, guys? I think I’ll share it at this week’s Fiesta Friday #202, co-hosted this week by Judi @ cookingwithauntjuju.com and Laurena @ Life Diet Health.

For Pie Crust: In a large bowl, combine the flour, sugar, salt, and pepper with a fork and set aside. Rub the pieces of shortening into the flour mixture either with your hands or a fork, mixing just until it looks like coarse bread crumbs. Using the large holes on a box grater, grate the butter directly into the flour mixture. Stir a few times with a fork , then make a well in the center of the mixture. Pour in the ice water, using a stiff rubber spatula/fork to make the dough come together. If it’s still too dry, you may add more water, 1 tablespoon at a time until it holds together. Divide the dough in half, then wrap each half in plastic wrap. Allow it to rest in the fridge overnight.

For Filling: Scoop one half of the roasted potato out of the skin. Use a fork to coarsely mash it. Peel the skin off of the other half and roughly chop it into chunks. Set potato aside for now.

Heat about 1 tablespoon of oil in a Dutch oven and brown ground beef. Drain the beef of fat, then place it covered in a bowl. Saute the onions in the skillet until translucent, about 5-7 minutes. Add the garlic and cook for an additional minute or two, then add the beef back to the skillet with the broth and spices, stirring to combine. Bring the mixture up to a boil, then lower heat down to medium and allow the liquid to mostly cook off. Remove from the heat and allow to cool.

Take the reserved mashed and cubed potato, and add to the beef mixture. Taste and adjust for seasoning, then refrigerate overnight to allow flavors to develop.

Preheat oven to 425°F. Grease a 9 inch deep dish springform pan. Sprinkle a work surface with flour. Divide pie crust in two, making one half slightly bigger than the other. Keep smaller half in fridge while you roll out the other into roughly an 11-12 inch circle. Carefully place crust in bottom of the pan and use your knuckles to press it into bottom and up the sides. There should be some overhang dough; that’s a good thing, don’t cut it off.

Take the filling and spoon it into the prepared pie crust. Keep refrigerated while you roll out the other half of the dough into a 10 inch circle. Use a pizza wheel or knife to cut it into strips if desired. (You can also just place the top crust whole on top of the pie without cutting a design) Lay the strips over the pie in a lattice design, then bring the overhanging pie dough up over the strips, crimping them together to seal. If you have some extra scraps, you can use a pie cutter to make decorative shapes like I did.

Use a pastry brush to brush the beaten egg over the pie crust. Place the pan on a sheet pan that you’ve lined with foil. Bake for 25 minutes, then lower heat to 375 degrees Fahrenheit and continue to bake for 30 to 40 more minutes covering with foil if top crust start to become too brown. Allow to rest on a wire rack for at *least* 40 minutes before unmolding from the pan. If you don’t want to wait that long, it’s okay, the crust just may not hold up its structure as well when it’s still piping hot.